Rennes and Angers met in the 17th fixture of Ligue 1 at Roazhon Park on Saturday. The home side ran out victorious in what proved to be a rather drab match last weekend.

Rennes have slowly regained their form after a slump midway through the first half of the season. They’ve won four out of their last five matches and were looking to continue their fine run with a win against Angers at home.

And they duly did. This win against Angers brought Rennes up to fourth place in the Ligue 1 table.

Angers, on the flip side, were very impressive earlier in the season. But three losses in a row (including against Rennes) meant that they’d fall down from eighth to 12th place in the table albeit previously managing to stay in the top three for a while.

This tactical analysis will look into both team’s tactics and approach in the game in a detailed manner.

Julien Stéphan deployed his team in a familiar 4-4-2 formation in this game. Minimal changes could be seen, both tactically and in terms of personnel. Jordan Siebatcheu and Eduardo Camavinga were both benched in this game. Meanwhile, M’Baye Niang and James Lea Siliki both started the game as a striker and central midfielder respectively.

Stéphane Moulin also made little changes to his team following their 0-2 defeat against Marseille. They still played in a 4-1-4-1 system with nine players maintaining their spot in the starting 11. Théo Pellenard and Mathias Pereira Lage both came into the starting lineup, replacing Rayan Aït-Nouri and Sada Thioub respectively.

Les Rouge et Noir’s game plan in the build-up seemed rather unclear. What seemed consistent in their play when on the ball was that they built their play up from the back and that they’d mainly try to combine through the middle by playing passes in between the lines. 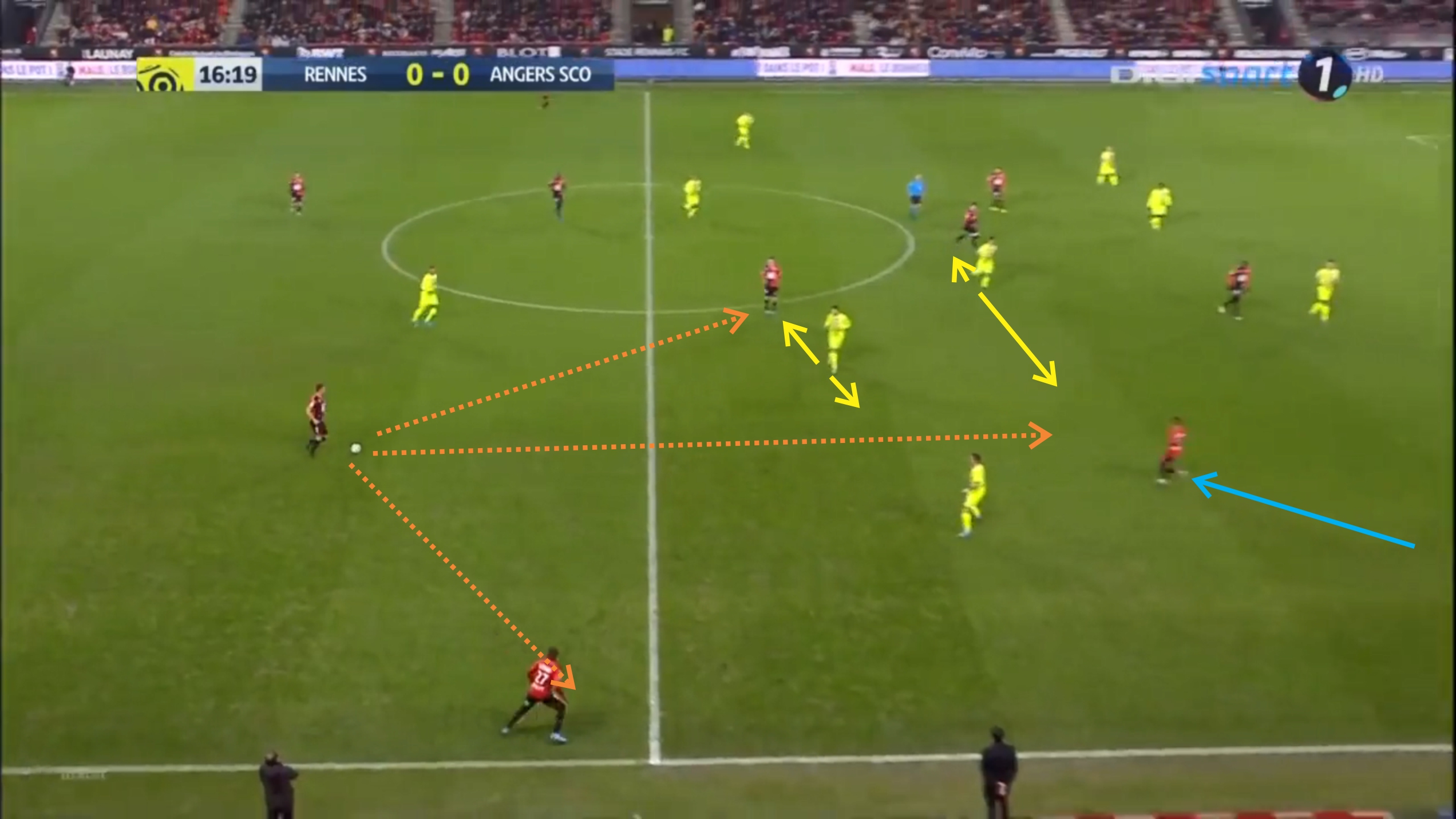 Above we can see Rennes trying to play their way up from the centre-back. Rennes’ shape in the middle third when on possession were very narrow. Wingers tend to sit in the half-space while the strikers alternately dropped and moved up to offer passing option, drag a centre-back out, and exploit space.

In this particular situation, Rennes’ right-winger (Raphinha) moved into the pocket of space between the second and third line of Angers. Damien Da Silva had several options to pass the ball to. However, if he gave the ball to either Benjamin Bourigeaud or Raphinha, Rennes could be in high risk of losing the ball due to Angers’ vertically and horizontally narrow defence. 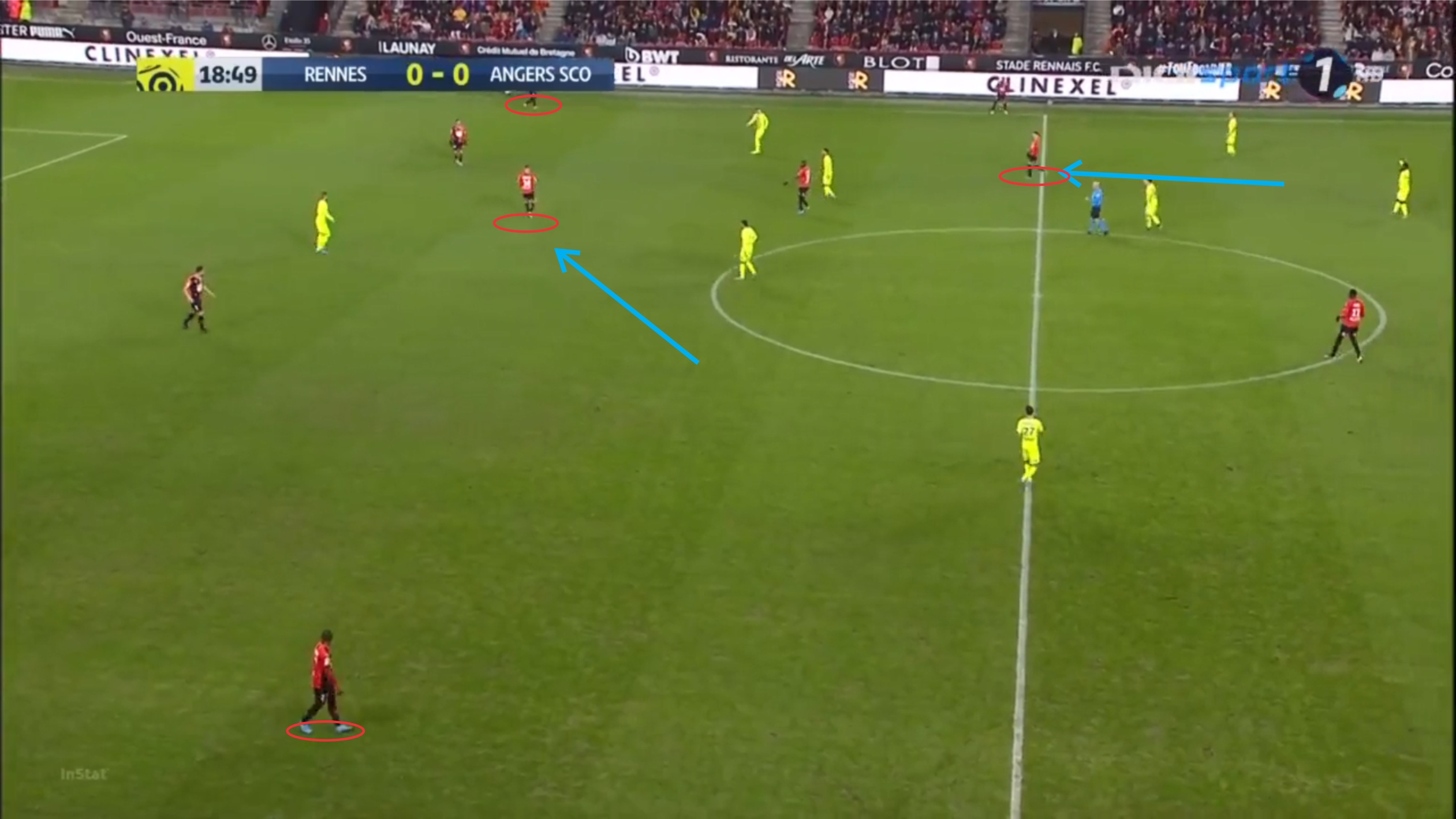 The same approach in the build-up and a clearer structure can be seen in the picture above.

Either Bourigeaud or Lea Siliki tended to drop down, sitting either in between or beside the two centre-backs. This was to free himself up. Meanwhile, the other Rennes centre-mid will try to find pockets of space to act as the link to progress the ball from back to front through the middle.

The two Rennes full-backs tended to sit a bit low in the build-up, making themselves available as an option out wide. One of the strikers (Adrien Hunou) also dropped into a pocket of space, offering a passing option to advance centrally.

However, despite their players actively moving and rotating their positions in the middle, Rennes were having difficulties in combining and progressing through the middle. The pass map above shows that Rennes had to work their way around and were forced to progress through the flanks or even go long to bypass the midfield.

It was still not an easy task for them though and Angers’ splendid defensive system didn’t help them either. Rennes were unable to keep possession for long in around the middle and final third and ended up losing the ball far too many times.

From the previous explanation in this tactical analysis regarding Rennes’ build-up play, we can already get a glimpse of how Angers set up their defence.

They defended with a medium block and seemed to mark zonally rather than man for man. The distance between each line was narrow and with the presence of one player (Baptiste Santamaria) who’d sit and sweep in between the second and third line meant that it would be difficult to play through the middle.

As mentioned before, Angers were horizontally and vertically narrow. This gave Rennes some space to play the ball to the flanks. However, once the ball’s moved to the flanks, they’d try to move their block in a quick and disciplined manner and overload the area where the ball was present as can be seen below. 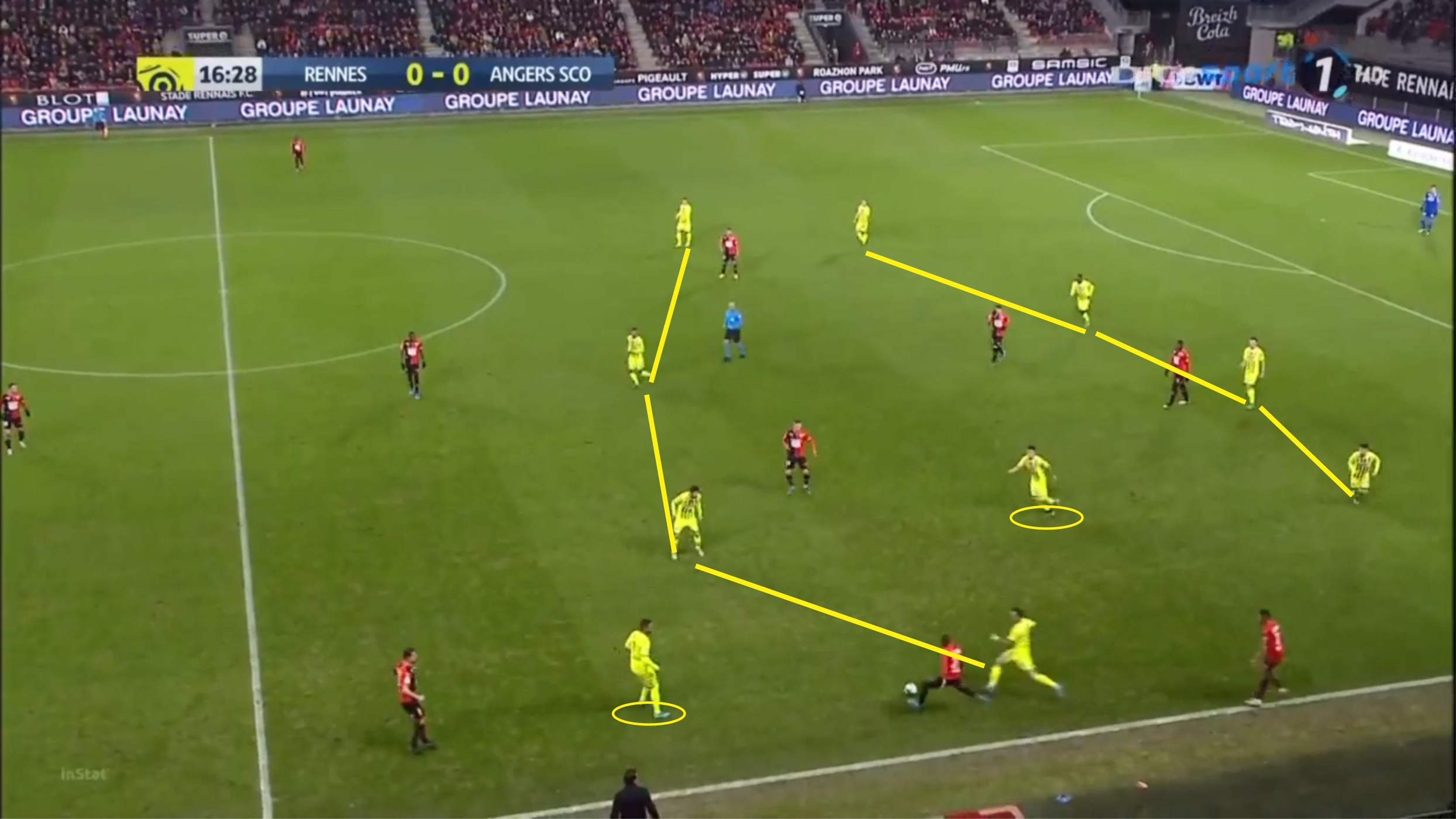 Above we can see that there was actually an abundance of space left on the opposite flank for Rennes. But due to Angers’ overload to isolate approach and discipline in moving their block, Rennes weren’t able to cause much danger pretty much anywhere on the pitch when building up.

Angers also tried to press high as Rennes attempted to play out from the back. 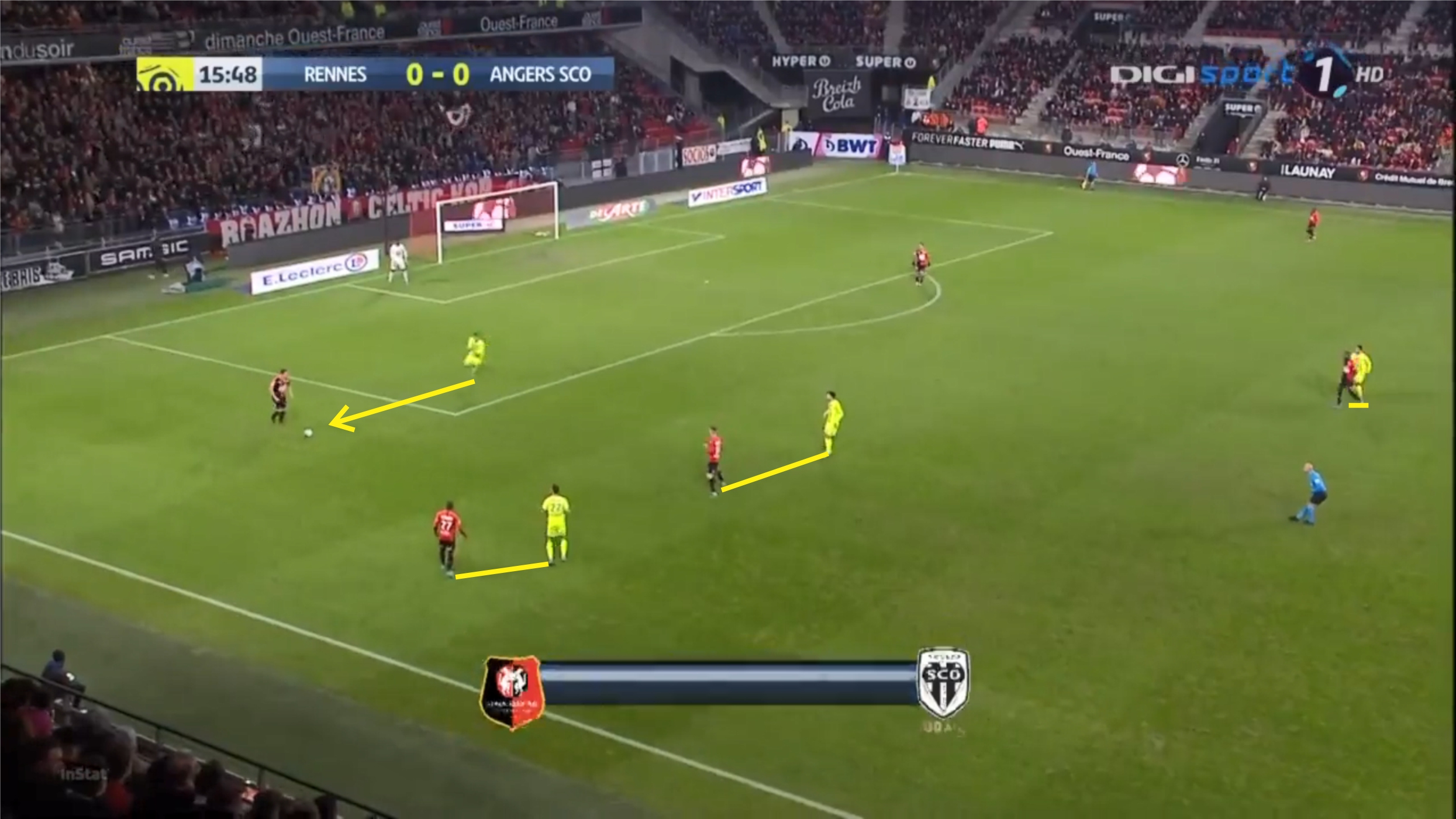 In the picture above, we can see that Rachid Alioui immediately pressed Da Silva while positioning himself in between the two Rennes centre-backs when Edouard Mendy played the ball to him. This was to block Da Silva’s lateral options and force to move the ball wider and potentially put the ball-carrier in immense pressure by isolating and putting him in a pressing trap. Rennes’ short options, in this case, were all unavailable as they were marked man for man Angers’ midfielders.

This forced Da Silva to launch the ball forward from the back. With the distance between Rennes’ second and first-line rather far, Angers were usually able to comfortably win the aerial duels and collect the second ball.

With Angers seemingly comfortable in defending against Rennes in the build-up, Stéphan’s side needed to find another way to really hurt Angers. And they successfully did.

Rennes were always known to be extremely quick, dangerous, and effective when breaking forward in the transition and they used that to great advantage against Angers’ unaware defence. 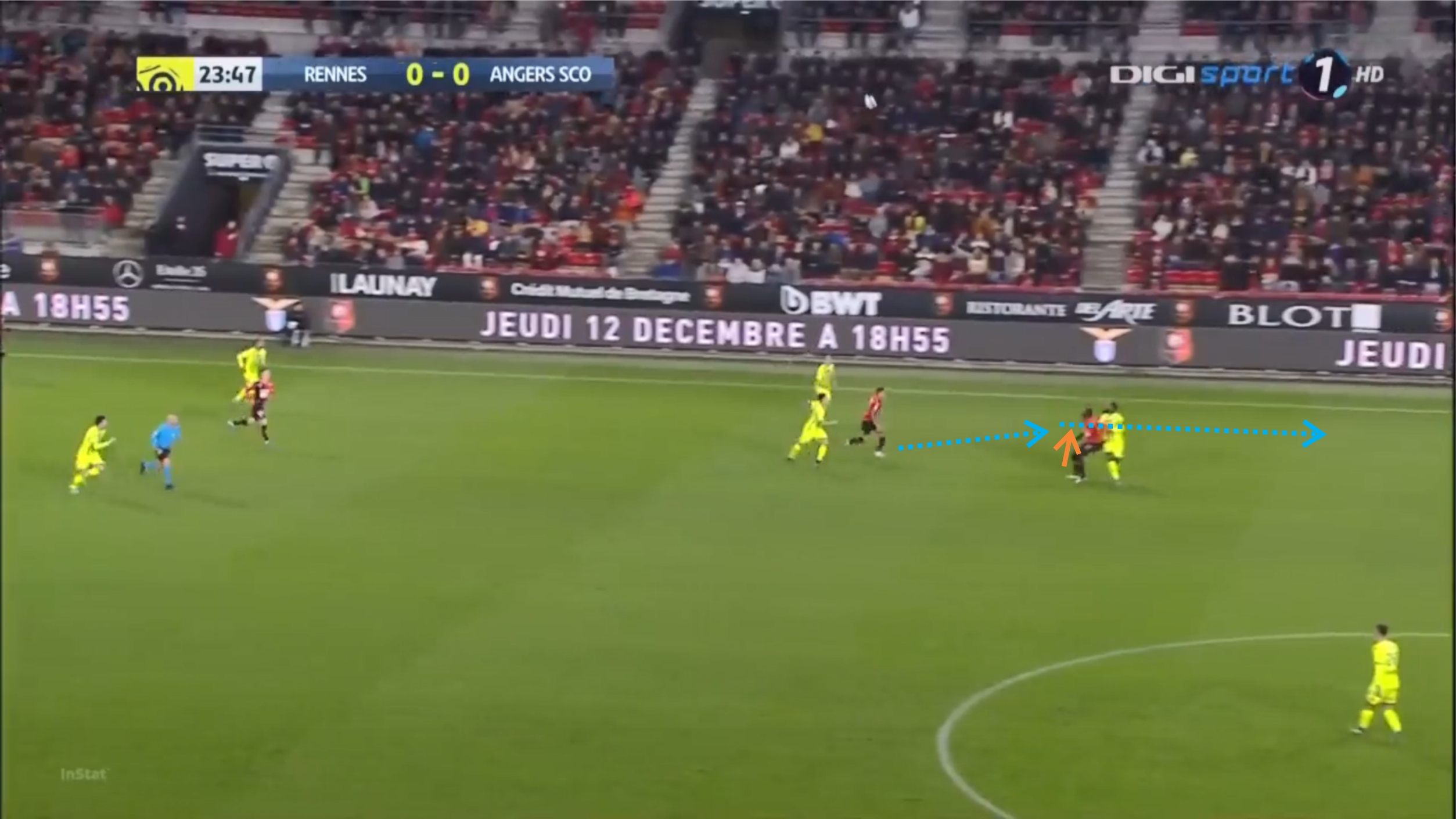 Above we can see Rennes breaking forward quickly. Faitout Maouassa lofted the ball forward as he’s under heavy pressure at the back. Niang won the header against Ismaël Traoré and directed it onto the path of Raphinha who’s already into his stride. The Brazilian wide man burst forward with pace and brought the ball to the byline inside the box. He then delivered a cutback cross which was easily finished by Niang with a first-time shot.

Rennes always tried to attack the flanks when on the break, with the wingers tending to make quick forward runs immediately after the ball was won. While the strikers would make central runs although occasionally, Hunou or Niang could be seen sitting wide and making runs in wider areas. 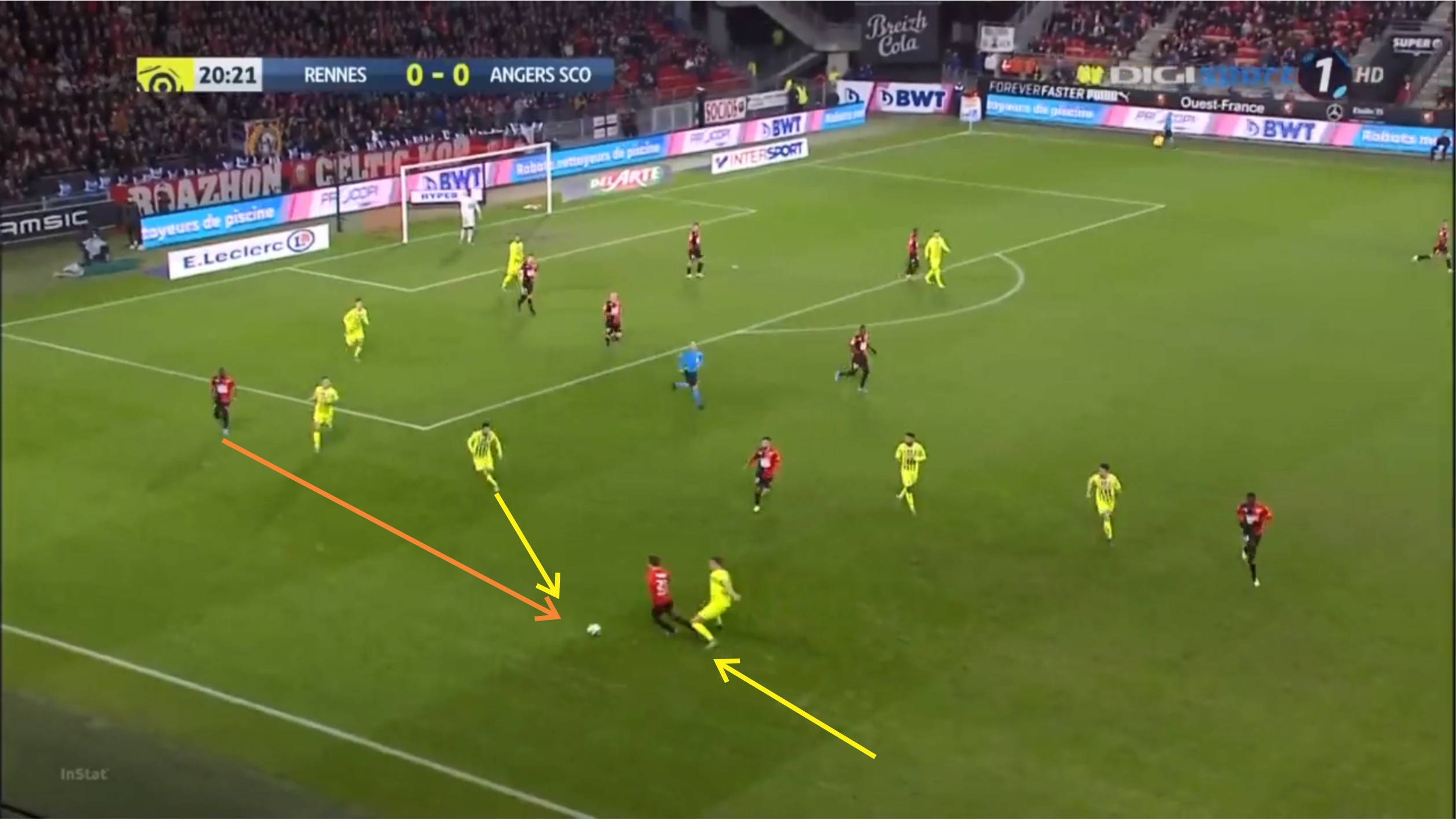 Angers tended to press immediately with multiple players after losing possession to try to win the ball back high up the pitch or at least delay the counter-attack and give the players more time to get back in defence. This proved to be quite effective in reducing Rennes’ threats in counter-attacks.

Unlike Rennes, Angers tended to break through the flanks albeit often trying to progress through the half-space and exploit pockets of space between Rennes’ lines.

Angers’ shape in attack also looked to be quite flexible with Santamaria tending to go closer to the area in which the ball was present to provide support and act as the pivot. Thomas Mangani and Angelo Fulgini tended to sit in the half-space being the main actors when it comes to progressing the play, opening up spaces, and creating chances with their passing ability and vision. 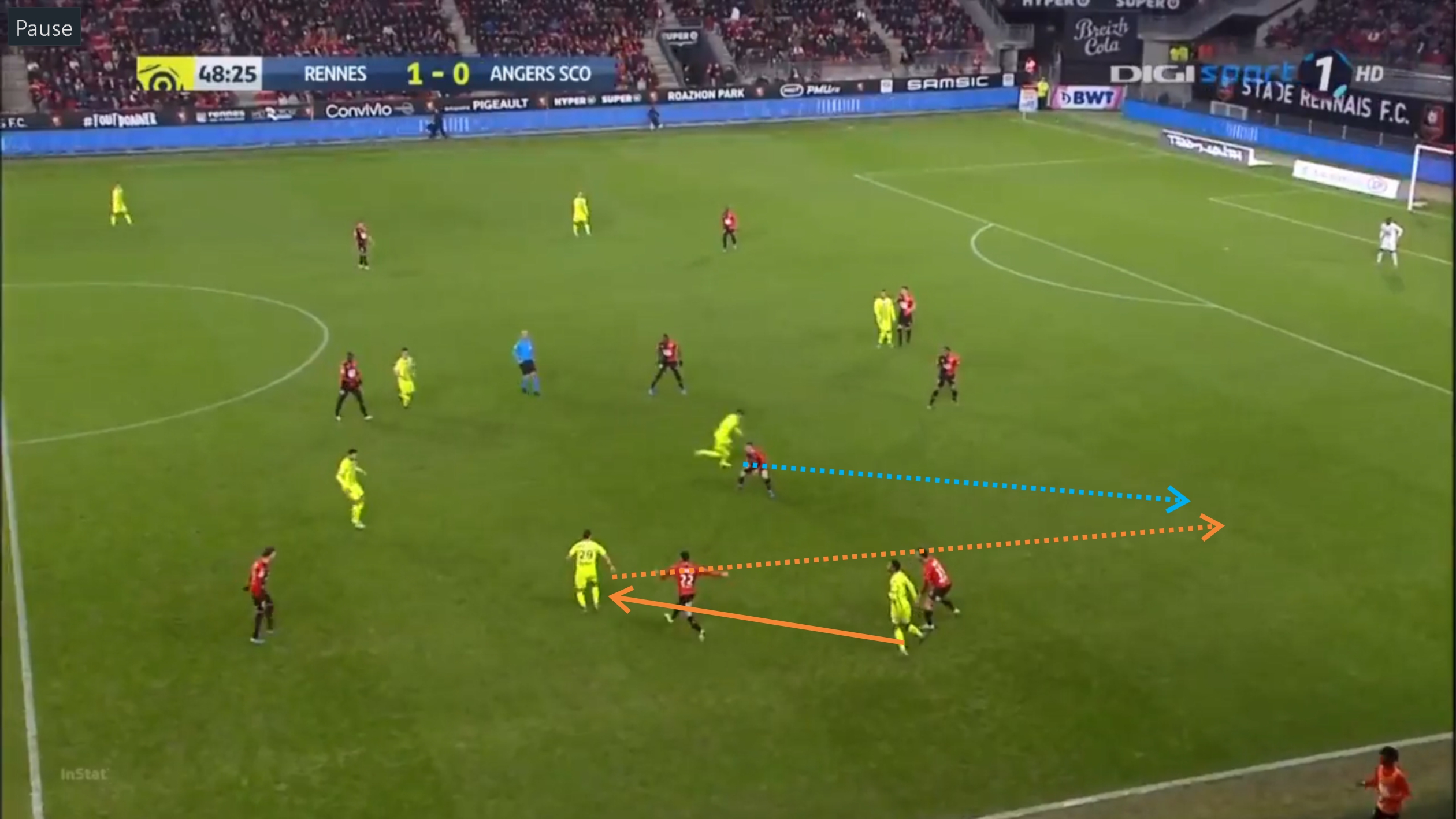 Angers’ two wingers, centre-mids, and full-backs tended to form a triangle in around the flank and half-space. They’d often move the ball around and rotate their positions while doing so, disrupting Rennes’ defensive structure in the process.

The same thing can also be seen on the opposite wing as in the picture below. 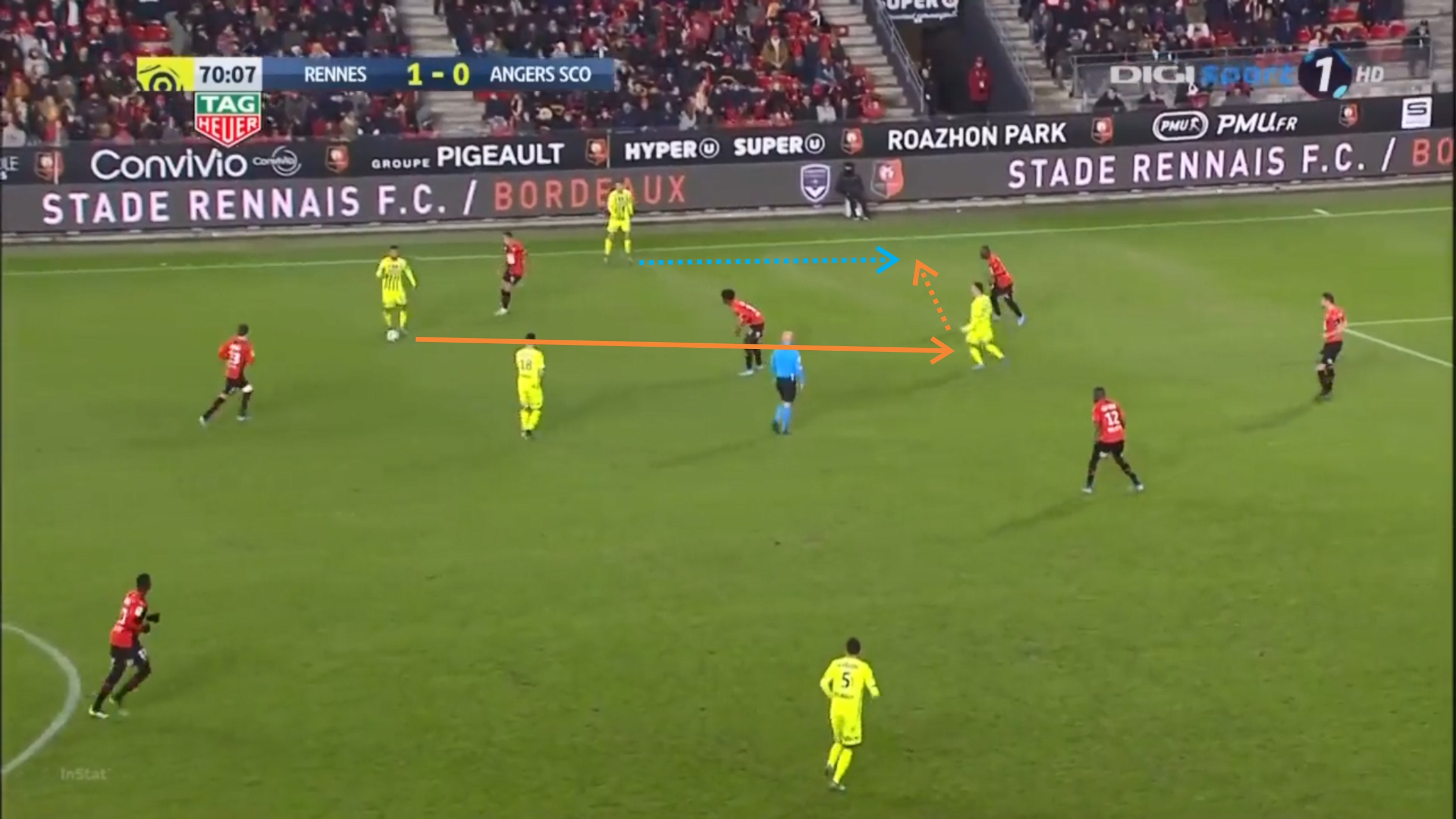 Above we can see a similar way of building up and breaking through by dismantling Rennes’ defence. A triangle was created consisting of Fulgini (swapping positions with Mangani), Pereira Lage, and Pellenard. Their main aim was to exchange passes with few touches and try to find third-man runs out wide.

Rennes, of course, would also try to overload the wider area when the ball was there to prevent Angers from playing comfortably there.

Les Rennais defended with a medium block with a 4-4-2 structure as we can see below. 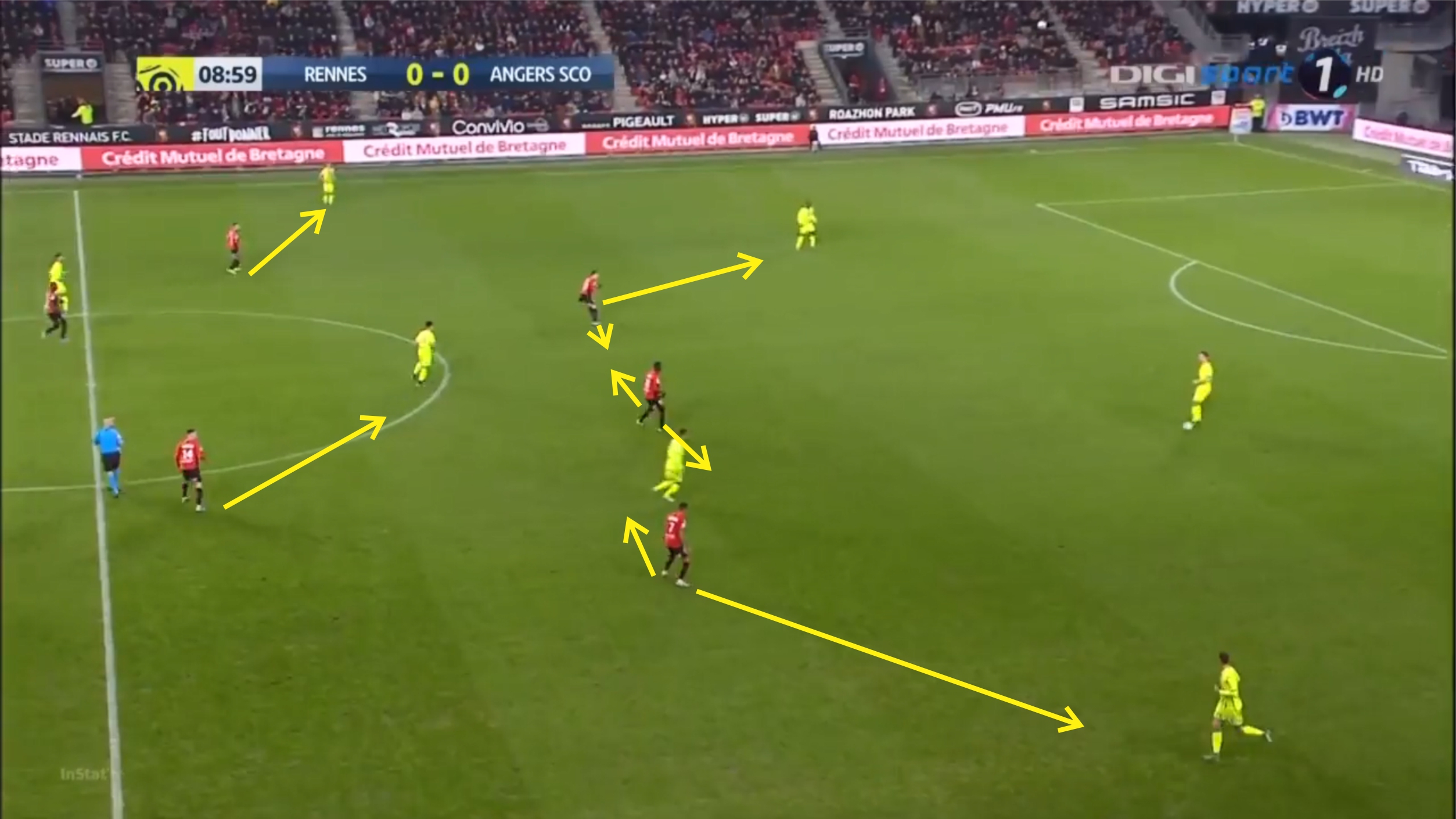 They marked zonally rather than man for man and would move as a unit when the ball’s played to one side.

The two wingers also appeared to be sitting narrowly allowing space on the flanks and denying access to the middle. When the ball was played from the goalkeeper to the centre-back, Rennes didn’t seem to exert pressure. However, when the ball was moved laterally either to the other centre-back or towards the nearest full-back, they’d start closing down and move their block. This can also be seen in the picture below. 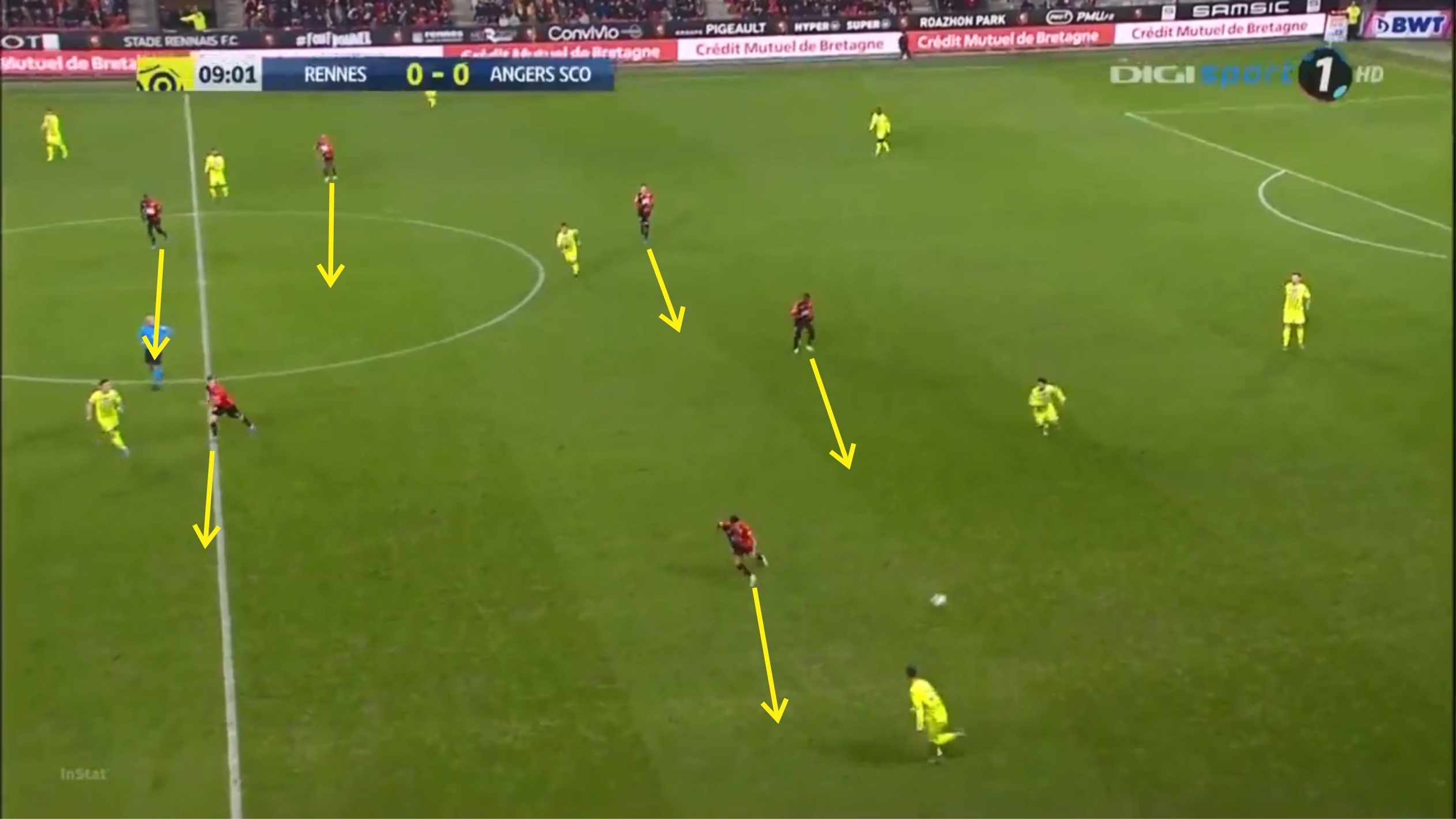 Despite their defensive setup and quickness when moving their block, Rennes were often caught by Angers as Moulin’s side were often able to move the ball around, rotate positions, and switch play very effectively. 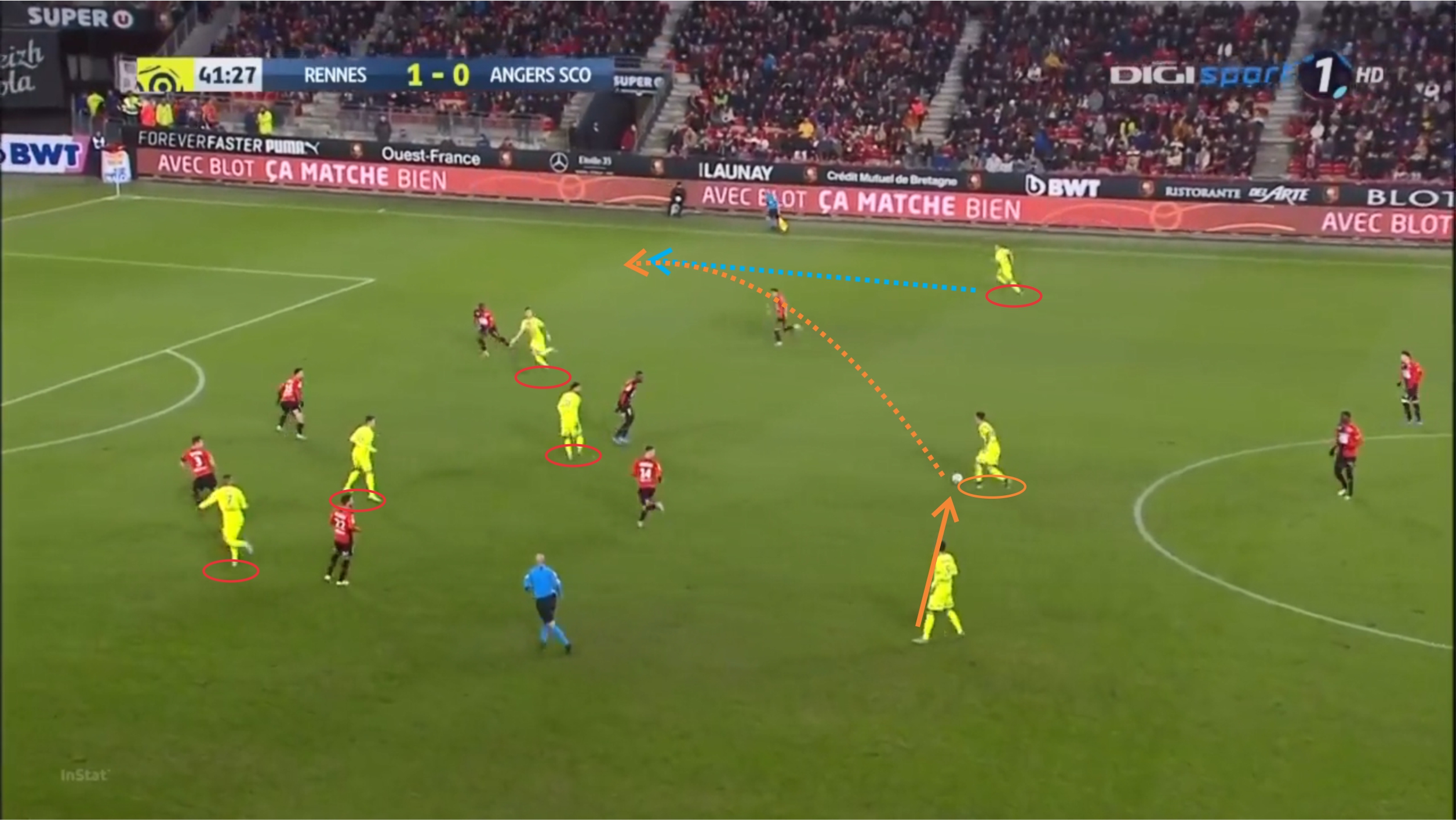 Here we can see Angers switching play after being unable to break through the left flank. With Pellenard (not in frame) inaccessible out wide, Mangani decided to play the ball laterally to Santamaria. Pierrick Capelle made an inward diagonal run to open up space out wide which triggered Vincent Manceauto make the run to exploit that space on the right side. Upon receiving the ball, Santamaria spotted Manceau’s run and played the ball to him.

However, in this situation, Santamaria took one touch too many which gave Raphinha enough time to cover that area. Manceau’s touch as also rather poor, resulting in Angers losing momentum in attack.

This way of attacking occurred numerous times throughout the game, giving Angers a lot of chances to cause danger in the final third. However, misplaced passes, poor touches, terrible decision making, and lack of effectiveness in front of goal were their main problem. Surely they could have scored at least one goal from open play were it not for them wasting chances after chances after successfully breaking through Rennes defence.

In the end, Moulin’s side got one back at the dying minutes of the game albeit from a corner kick.

While the visiting team managed to dominate the possession, they did not manage to get the most of it. Far too wasteful and indecisive in the final third.

The hosts meanwhile, were unable to breakthrough Angers’ impeccable defence through build-up but they used their most dangerous weapon of all: quick breaks. While Rennes didn’t have as many chances as Angers at goal, they were extremely effective.

Moulin would definitely regret not getting any points from this game.