The home side are already leading pretty comfortably midway through the season with an eight-point lead over second-placed Marseille in the Ligue 1 table. Though it’s still too early to rule out the other contenders to dethrone defending champions PSG this season, it’s looking quite likely that Thomas Tuchel’s side will eventually finish top of the table yet again this season.

Lille, meanwhile, haven’t been able to replicate their fine form from last season. A slight change of personnel and tactics haven’t seemed to work very well. Lately, Christophe Galtier side has even seen a rather significant change in terms of tactics. Sadly, that too still hasn’t affected Lille in a positive way. Way too many points dropped in the league and with three losses and a draw in UEFA Champions League, surely their European dreams this season are over.

This tactical analysis will take a look at both team’s setup, approach and tendencies in the game. Without further ado, let’s delve into it now. 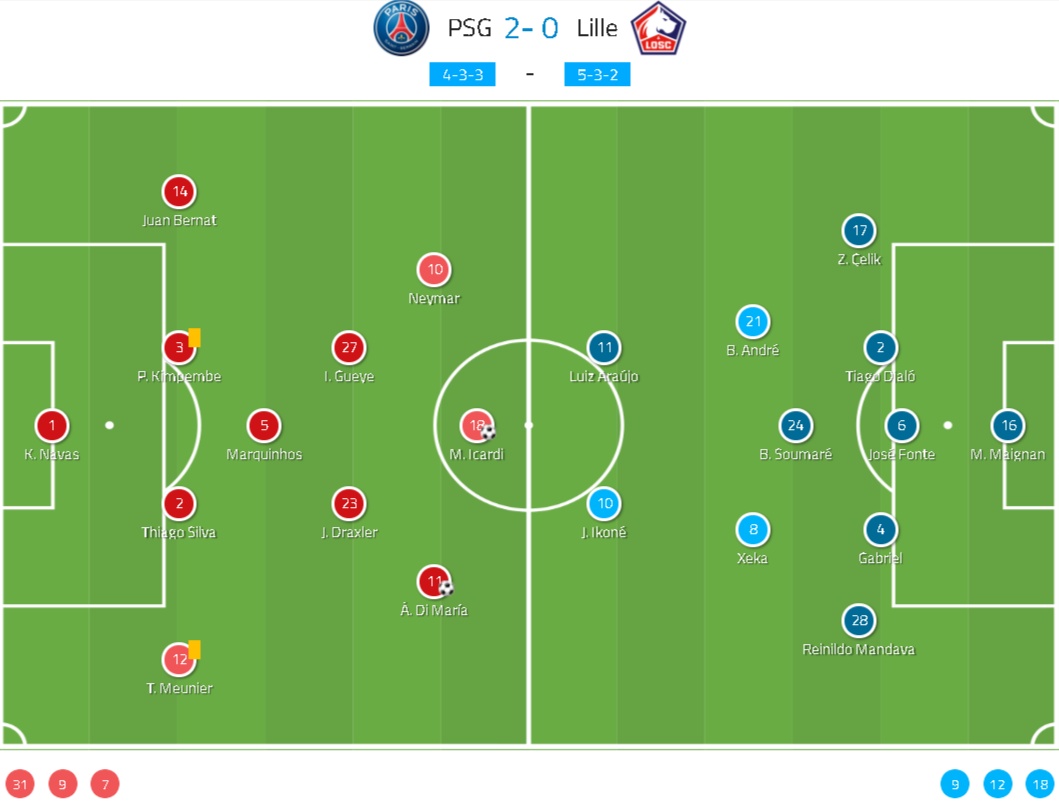 PSG played in their usual 4-3-3 formation. Tuchel fielded a rather significantly different side from the last time they played in Ligue 1 (vs Brest). More than half of the team were changed with Keylor Navas, Thomas Meunier, Presnel Kimpembe, Juan Bernat, Marquinhos, Neymar, and Mauro Icardi all started against Lille. Only Thiago Silva, Julian Draxler, Idrissa Gueye, and Ángel Di María kept their place in the team.

Lille, meanwhile, were trying something new yet again this season. Having tried 3-4-3 in their last few matches with mixed results, now Galtier deployed his team in a 5-3-2 formation. In this match, they didn’t play with any natural strikers though. Instead, Luiz Araújo and Jonathan Ikoné were tasked to play up front.

PSG played a possession-based game and tried to play through the middle. They were fairly patient when building up from the back as they tried to find a way out of their half and into their opponent’s territory. However, once the ball entered the opposing half, PSG would move the ball much quicker. Using fewer touches on the ball and quick exchanges of passes.

However, with Lille defending in a pretty solid 5-3-2 system, Les Parisiens found it rather difficult to breakthrough and create chances in the final third. 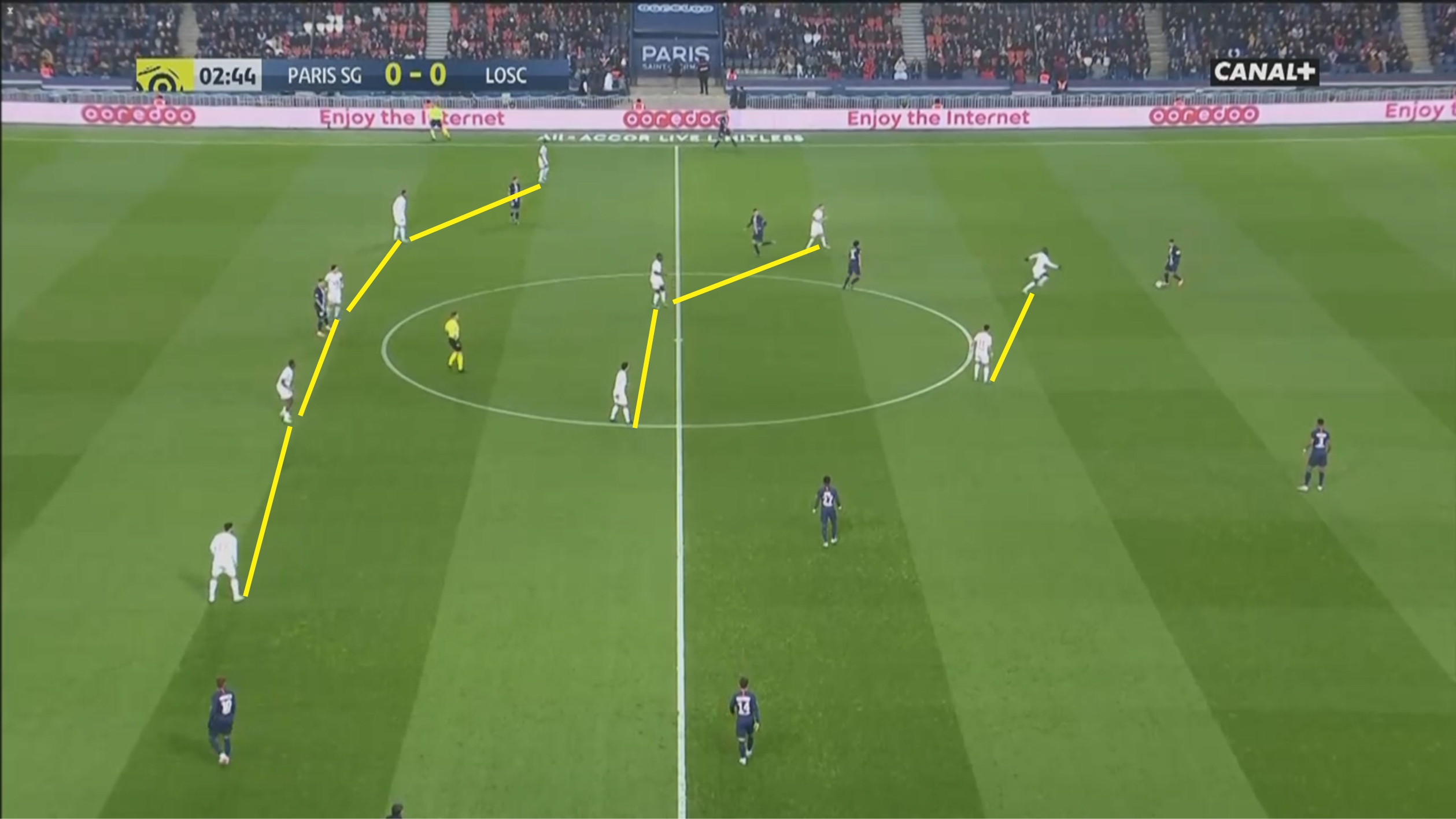 As you can see in the picture above, Lille maintained a 5-3-2 shape while defending. They’re defending in a medium block that’s rather compact vertically, mainly to prevent PSG from playing between the lines. The second and first line of pressure is quite narrow while the third line (backline) stretches wide. 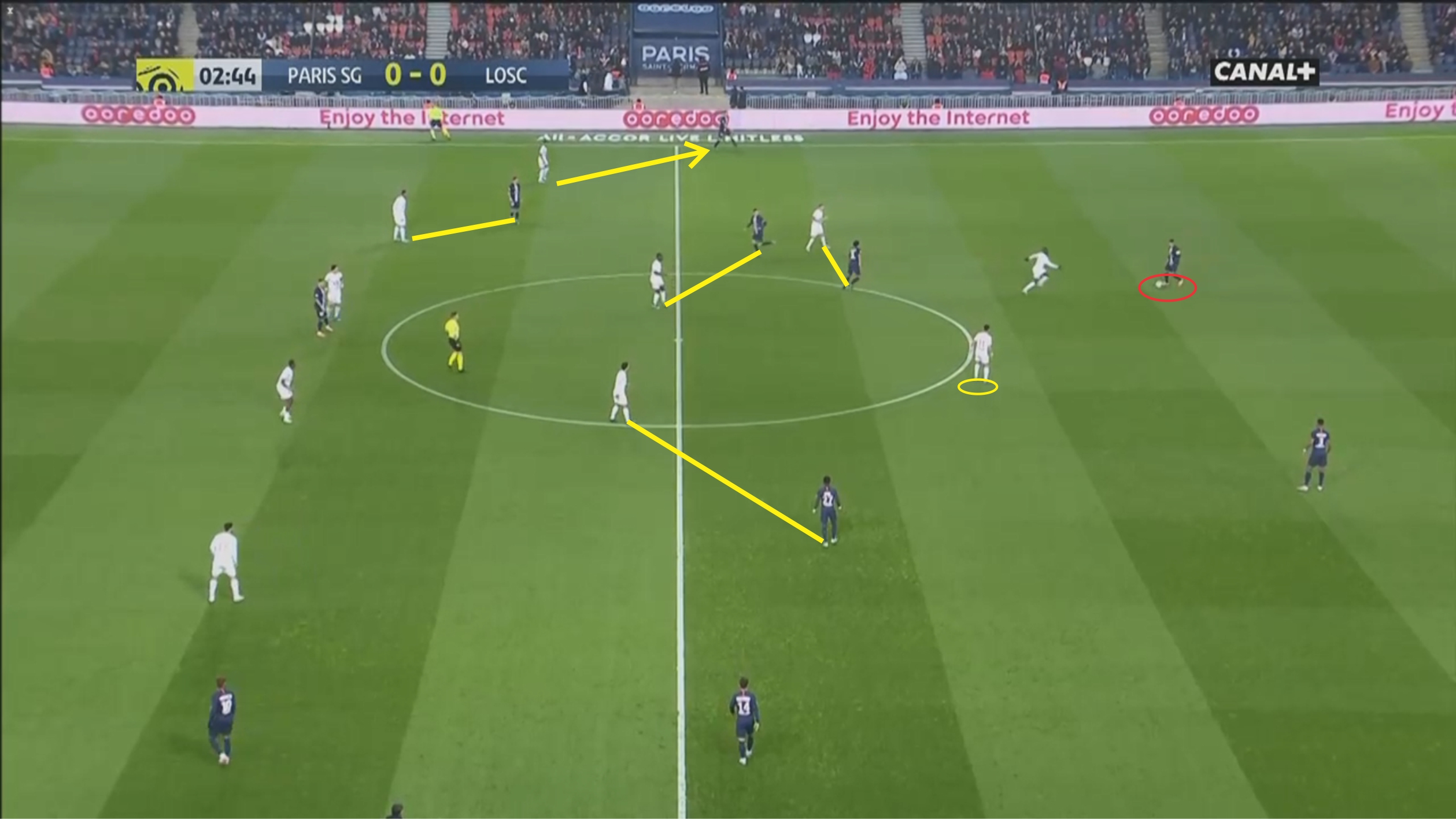 Lille’s first line aimed to press the ball. As you can see in the picture above, while one (Ikoné) closed down the ball, Araújo (yellow circle) maintained his position. This is to prevent space to be created in the middle. While the first line looked to press the ball, Lille maintain their compactness by pushing up as a unit, especially when the ball was moved back.

Lille’s second and third line also seemed to be defending in what could be called man-oriented zonal marking. This meant that the reference point here was the PSG players and Lille players positioned themselves around the space they cover in order to maintain distance to the opponent closest to them.

If the centre-back decided to play the ball wide, Lille would immediately close down space and overload that side. The problem for Lille would be when PSG were moving the ball and switching play towards the other side quickly. 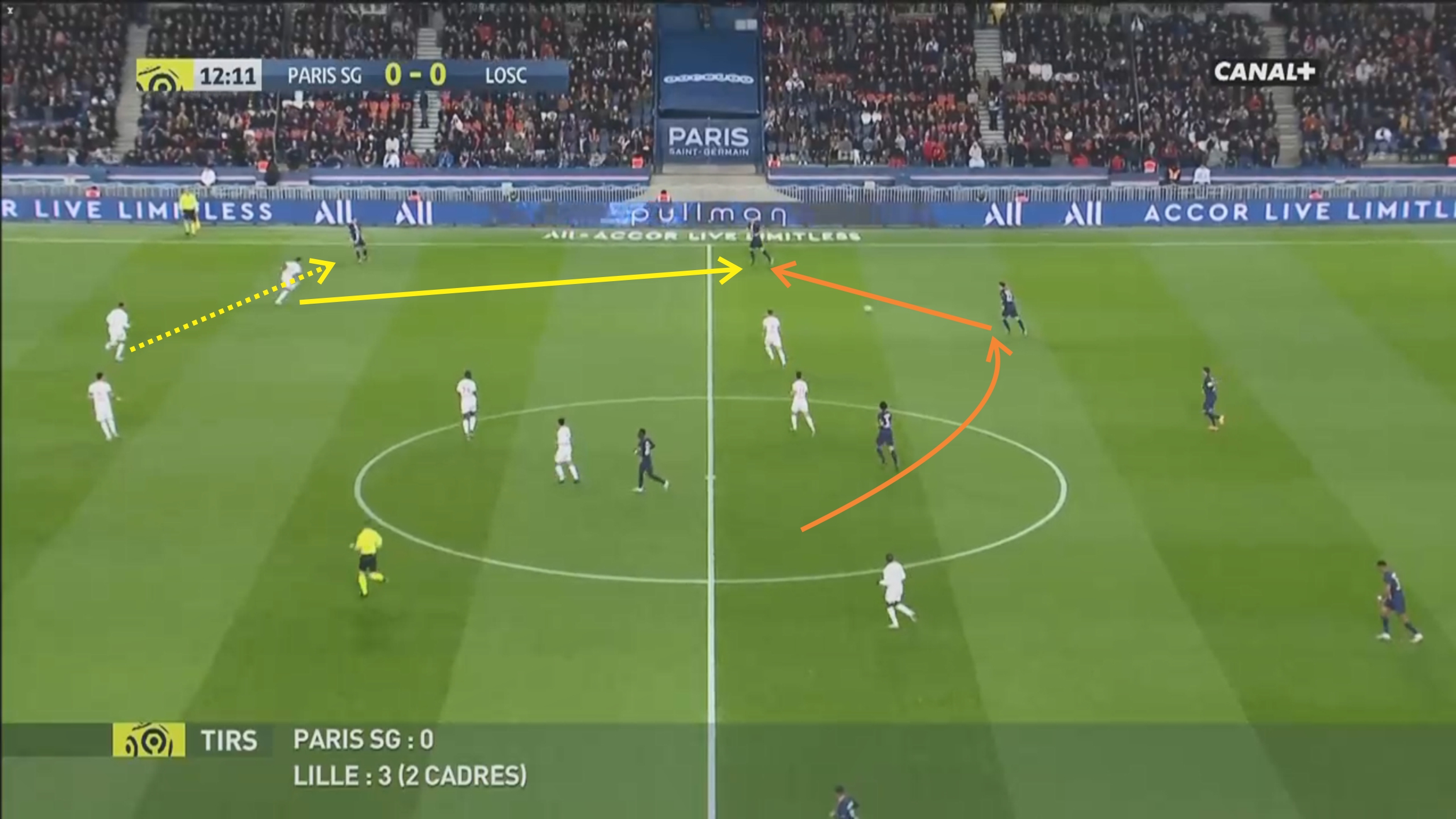 In the image above, PSG successfully moved the ball from left to right quickly. As you can see, Reinildo, who normally should be maintaining a fairly close distance to Meunier was not yet in the position to do so. He had to cover a big distance and Meunier was comfortable in receiving the ball and had more time and better opportunity to progress forward with the ball.

With the central options blocked, PSG were often forced to move the ball wide in the build-up phase. However, there were certain times that the one of the three-man midfield would drop down, and sit in between or beside the two PSG centre-backs. 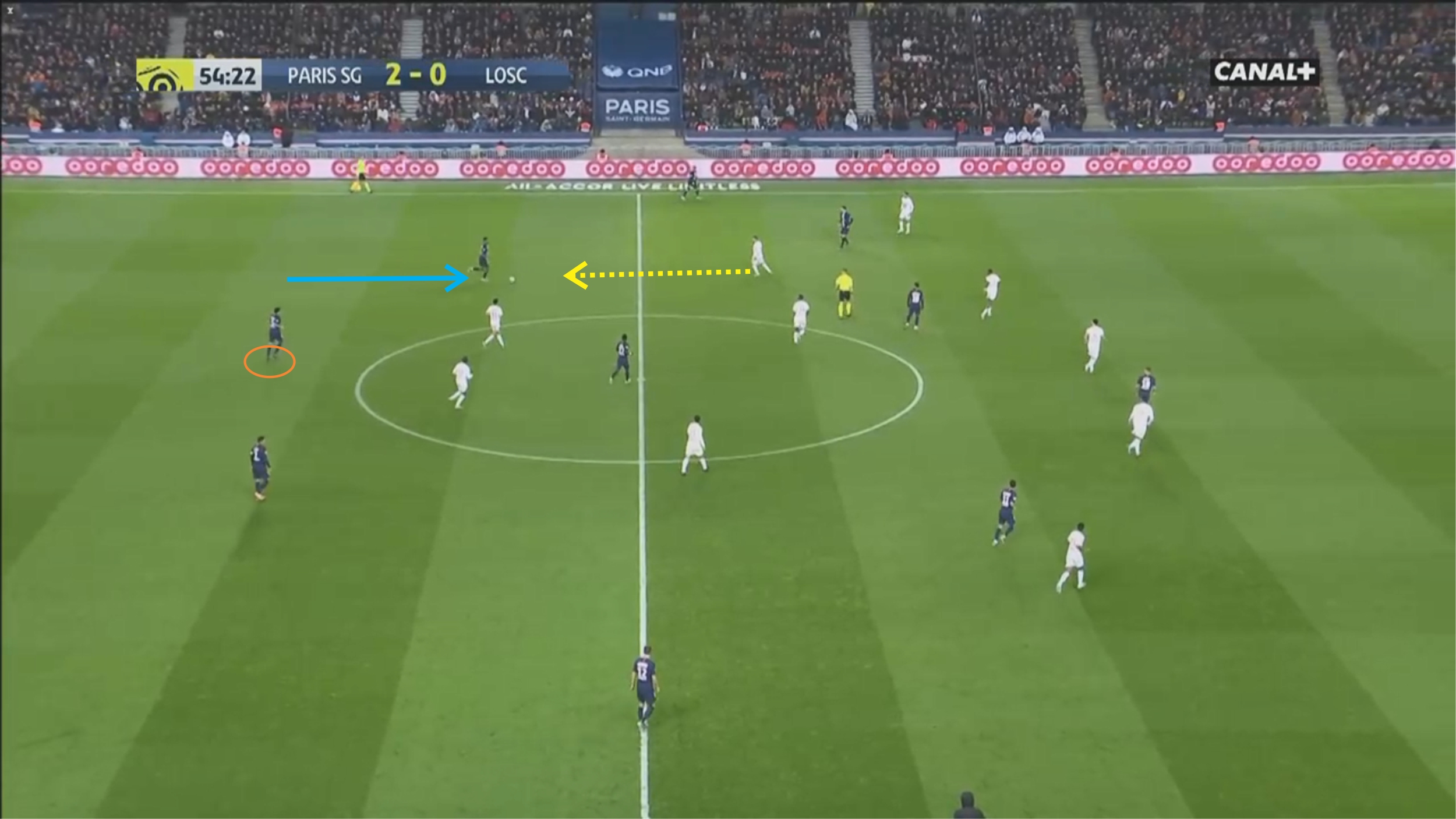 The image above is an example of PSG successfully progressing through the middle and breaking through centrally. In this situation, Marquinhos dropped and sat in between the two centre-backs. Silva played the ball to Marquinhos and the latter in turn moved the ball towards Kimpembe. The Frenchman then drove forward with the ball, effectively escaping Lille’s first line pressure and entering the midfield.

The image above shows PSG’s shape seemed to shift into more of a 3-1-6 as a result with Draxler moving into the half-space and staying rather advanced while Gueye sat in the middle, providing a passing option and prompting the opposing striker to close the passing line to the middle (towards him) which allowed Kimpembe to drive forward.

With Kimpembe driving forward, Lille’s right-sided central midfielder immediately closed him down which opened up space in behind him between the second and third line. 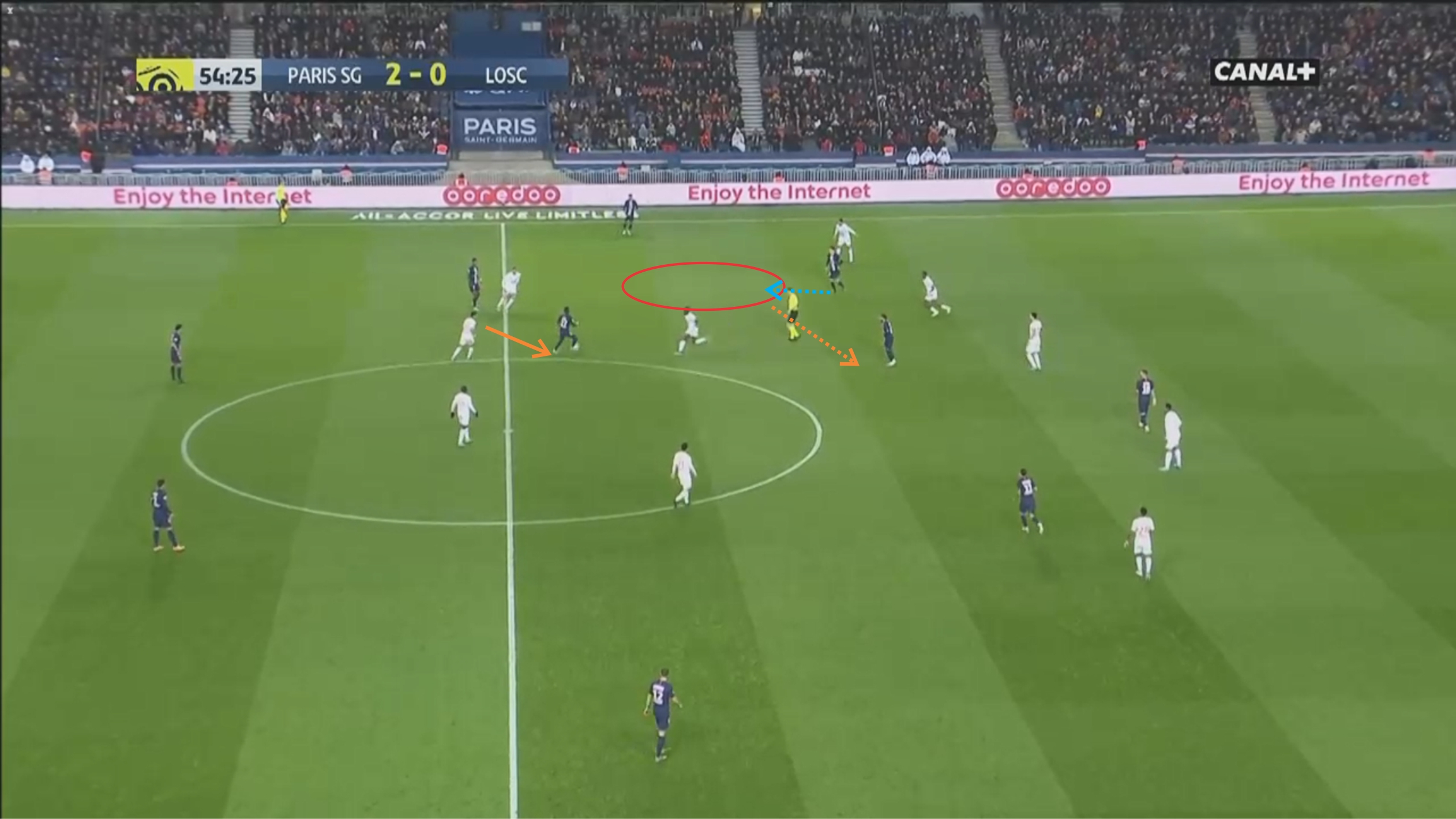 PSG exploited the space and combined quickly through the middle. Using fewer touches meant that the Lille defenders had less time to close them down properly. By regularly making two runs (moving up and dropping) PSG players successfully created distance between them and their respective marker, effectively freeing themselves up.

PSG were very aggressive in pressing in this match, causing Lille, who were usually quite patient with the ball and tended to play their way out from the back to be more direct and move the ball much more quickly, in an uncomfortable way of course. 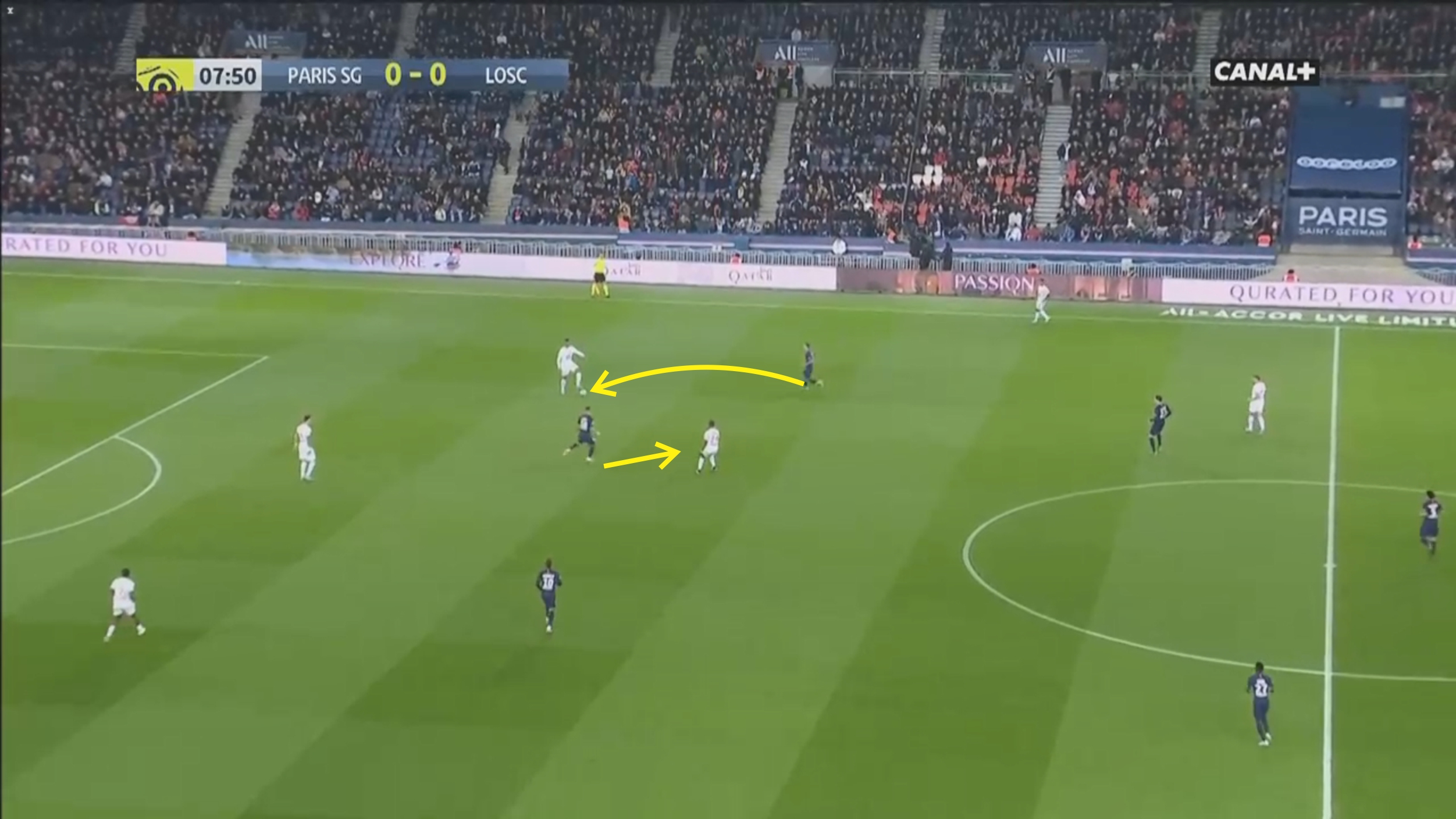 In the image above, firstly you can see that PSG committed three players as their first line of pressure. The second line, meanwhile stayed in the middle third, close to the third line which is quite high (close to the centre circle). In this situation, Di María closed down Gabriel while blocking the passing lane out wide. Meanwhile, Icardi immediately closed the passing lane towards playmaker Boubakary Soumaré. With no other viable options close to him, Gabriel passed the ball laterally towards José Fonte. 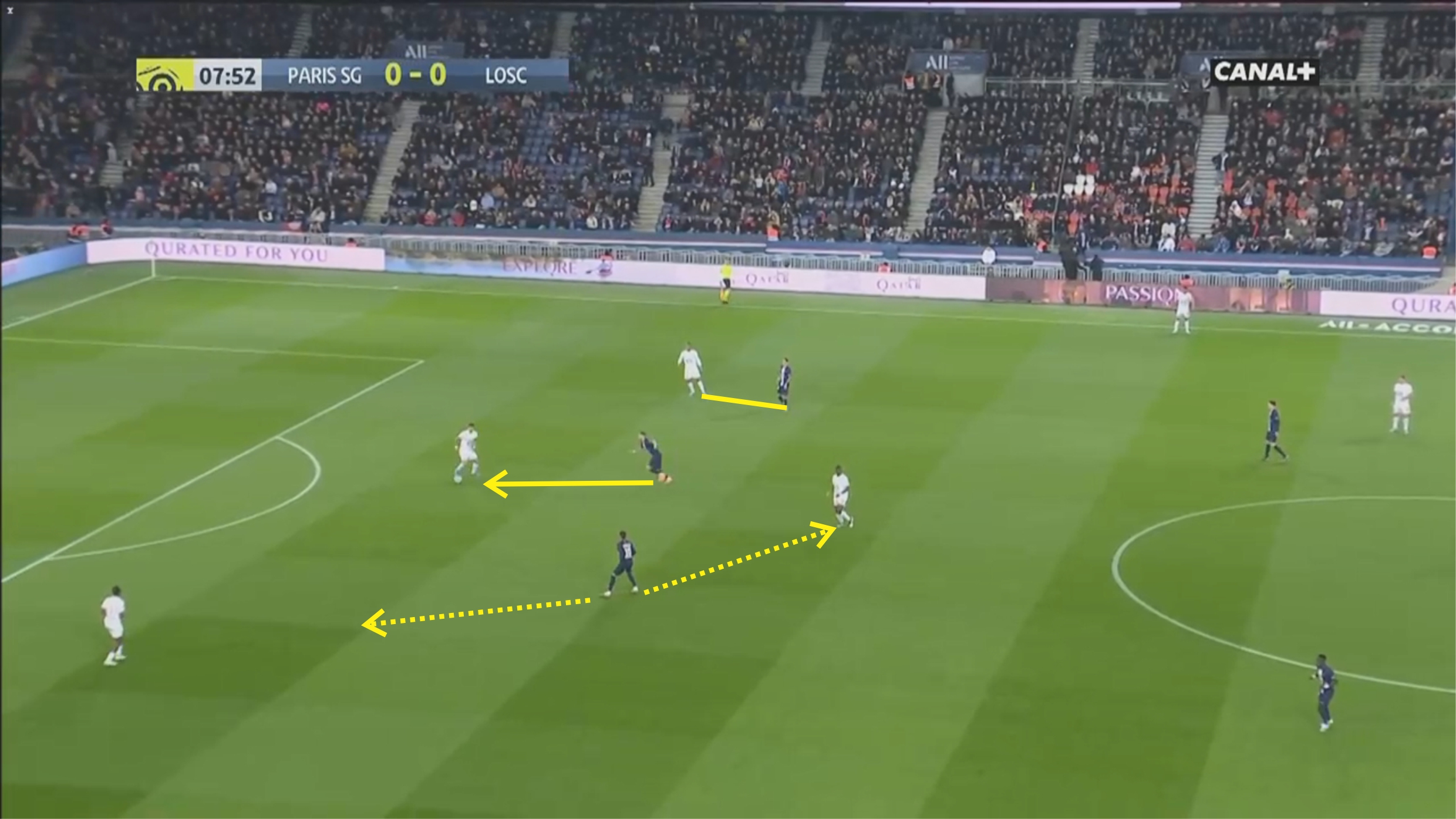 When the ball was played to Fonte, Icardi immediately closed the Portuguese man down whilst also trying to block his passing lane towards Soumaré. Neymar also stayed nearby with his concentrations divided, anticipating a pass towards either Soumaré or Tiago Djaló. Again, no safe short option to go forward, Fonte moved the ball laterally towards Djaló. 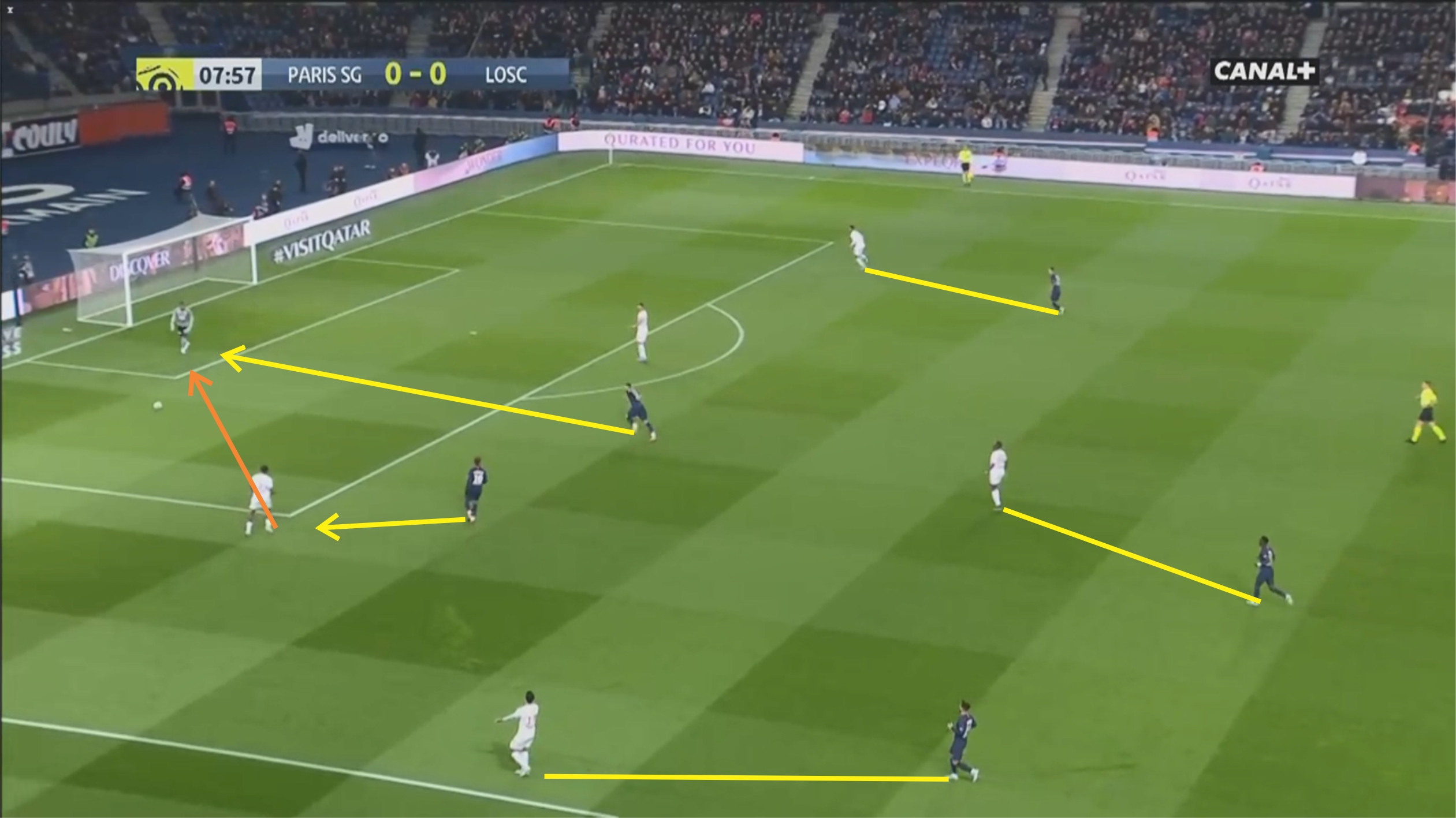 When the ball was played to Djaló, Neymar immediately closed him down. In order to provide support on that side, Zeki Çelik dropped down, but Bernat followed him forward. Djaló was deprived of any safe short option and under pressure in this case, so he moved the ball back towards Mike Maignan.

With the ball played back, PSG immediately pushed forward and put them under more pressure. As you can see, Icardi also immediately closed Maignan down and try to force him into mistakes whilst also blocking his passing lane towards Fonte. Gueye, meanwhile kept his distance with Soumaré in anticipation if the ball’s played towards him.

This was PSG’s main defensive tactics throughout the game. Press aggressively upfront, isolate players by blocking passing lane, and force to play long. They were pressing and marking man-for-man and their effective positioning when doing so were vital in preventing Lille from playing from the back.

Lille, understandably, didn’t win a lot of aerial duels upfront with neither Araújo nor Ikoné able to win duels against PSG’s defenders. Lille had to rely a lot on Benjamin André and Xeka to win these duels for them or try to at least get to the second ball first. 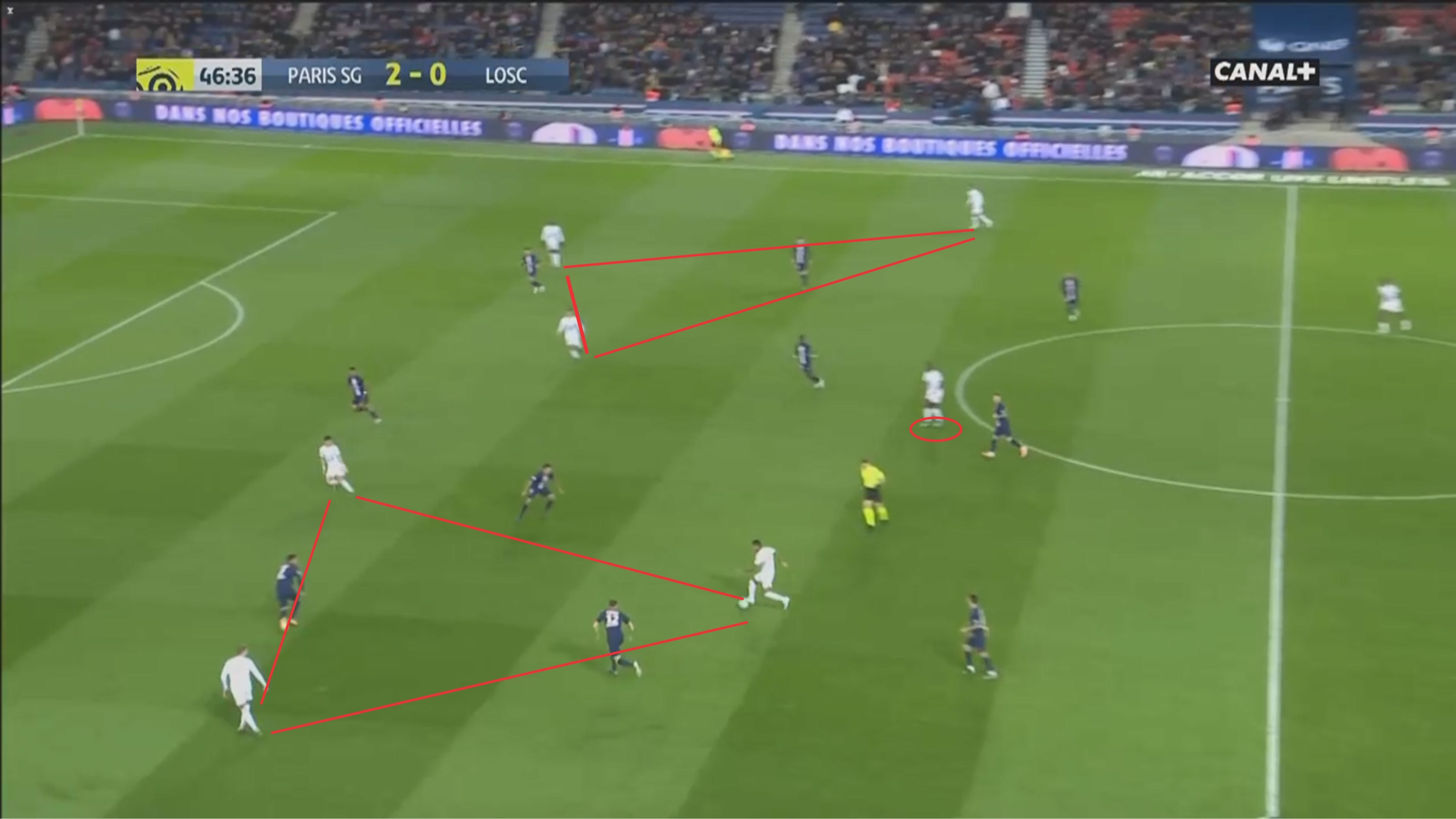 In the attacking phase, Lille were very much vertical-oriented. They spent most of the time playing and attacking down the half-space and the flanks, rotating the ball around by creating triangles.

Lille seemed to create a 3-1-6 attacking shape, which was similar but quite different in terms of approach when compared to PSG. The wing-backs would actively move forward and sat near the touchline, looking to stretch the PSG defence. The two central midfielders or ‘eights’ would position themselves in the half-space. The two strikers mainly sat centrally. They were quite flexible though so these positions were interchangeable. The strikers could often be seen sitting wide while the full-backs in the half-space and the central midfielders centrally.

As mentioned before in this tactical analysis, PSG’s main aim was to attack centrally so they’d tend to move the ball inside in the build-up. Lille, meanwhile, often moved the ball outside, before finally moving the ball inside again near the box around the final third usually by cutting inside with the ball. Lille would often do this rather than hugging the touchline and bring the ball towards the byline and delivering a cross from there. This was why they only registered seven crosses in this game.

With their numerical superiority up front, logically Lille should be able to overwhelm the PSG defence who had to divide their concentration towards defending more than one player in their area. However, Lille’s lack of speed when moving the ball in PSG’s half were the main reason why they were unable to regularly breakthrough PSG’s defensive line. Players took too long to make their decisions, often they’d take too many touches before re-distributing it, ultimately getting swarmed by PSG’s aggressively-pressing players.

Much different than what they did the last time when they won 5-1 at home against the very same side. Lille were very much quicker and very effective as well upfront. They moved the ball and rotated their positions quickly successfully disorganising and breaking through PSG’s defence.

Lille played fairly well overall. But “fairly well” surely wouldn’t be enough to beat a team as strong as Paris Saint-Germain. Lille were a bit too casual in defence at times and lacked discipline when shifting their defence which caused themselves some problems in their own half, especially in the first half, however, their system seemed to be quite solid already.

PSG were as usual, dominant, there didn’t seem to be anything special or any significant change in their way of playing since their heavy loss against the same team away from home last season. This time, they managed to convert their chances and were able to keep the Lille attackers silent although their approach in defence were pretty much the same as in their last meeting.

In a game against a highly effective team like PSG, you’d definitely have to keep the mistakes to an absolute minimum. As proven in this game, PSG were mainly playing the ball around, rather patiently looking for gaps and forcing the Lille players to commit defensive mistakes before punishing them through extremely quick attacking transitions in which two of them have resulted in two goals.