Levante played host to current La Liga champions Real Madrid for what was both sides fourth league game fo the season. Although, in a neutral venue, the match took place in Villareal’s stadium Estadio de la Cerámica as Levante’s stadium is currently being re-developed.

An unlikely but top-class finish from Vinícius Júnior in the 16th minute, picking up a loose ball from a set-piece, to finish high in the corner gave the visitors the 0-1 lead. The second and final goal of the game came in the dying embers of extra-time when Karim Benzema converted from a counter-attack as Levante were pushing hard for the equaliser. Zinedine Zidane’s side was very fortunate at both ends of the field to come away with all three points and a clean sheet. Los Blancos now sit top of the La Liga table after four games played.

The tactical analysis below looks at some key tactics and talking points around this intriguing fixture. Our analysis looks at the most prominent aspects of both sides performance as well as looking at how both managers set their sides up to get success.

Levante: 4-4-2
Paco López side had a big test, but they did not shy away from the challenge or the ball. Yes, the Granotas played for counter-attacks at the most opportune times; however, when the 11 men of Madrid were in front of them, they had the courage and intention to build through the thirds to attack from wide areas.

In the defensive phase, Levante formed a low-block to suppress the Madrid attack sometimes offering six players to the backline. While in the attacking phase, Levante would push both full-backs into the final third to supply crosses to both centre-forwards and attacking midfielders.

Real Madrid: 4-3-3
Zidane’s men looked to build through the thirds starting from the back, utilising good width and depth with well-timed movement to create passing angles through the units. Los Blancos were confident in committing numbers to the final third, white jerseys stretching sideline to sideline while wide forwards and central-midfielders make forward runs to progress the attack.

In defence, Madrid did not lack respect for their opposition, although there may be a gulf in class when comparing both sides Levante always seemed a threat going forward. Zidane’s side was just as energetic and intense in the transition to defend as they were in front of goal.

Madrid built through the thirds, starting with confident passing between the goalkeeper and defenders, moving the ball horizontally from one side to another until a forward pass was available to progress beyond the first line of pressure.

Passing opportunities only became available with good high-to-low movement from the Madrid front three, starting high then coming short to receive a pass unmarked. The full-backs were integral to the attack, being involved in every passing combination in every third of the field.  As well as providing crosses and forward runs into the box to create goal-scoring chances from shorter distances.

In the final third Madrid were superb, all ten outfielders showed they had a clear understanding of the system, which allowed them to rotate and move between the units freely as well as horizontally to progress the attack. When Levante became compact and tough to break down on one side, a quick switch to the opposite flank and Madrid looked a threat on goal moments later.

Los Blanco’s did, however, find it difficult to beat the intense backline of Levante in the final third. Even with a creative, quick movement to penetrate centrally or in the half-space Levante always made it difficult for Madrid to get a clean shot on goal.

Above, we see Madrid start the attack with a short pass out from the Goalkeeper, Thibaut Courtois. Notice the width and depth of the Madrid outfielders, in particular, the higher central-midfielders who would only drop deep when a clear pass was from a defender was available.
This shape allowed Madrid to play through the high press of Levante with ease at times. 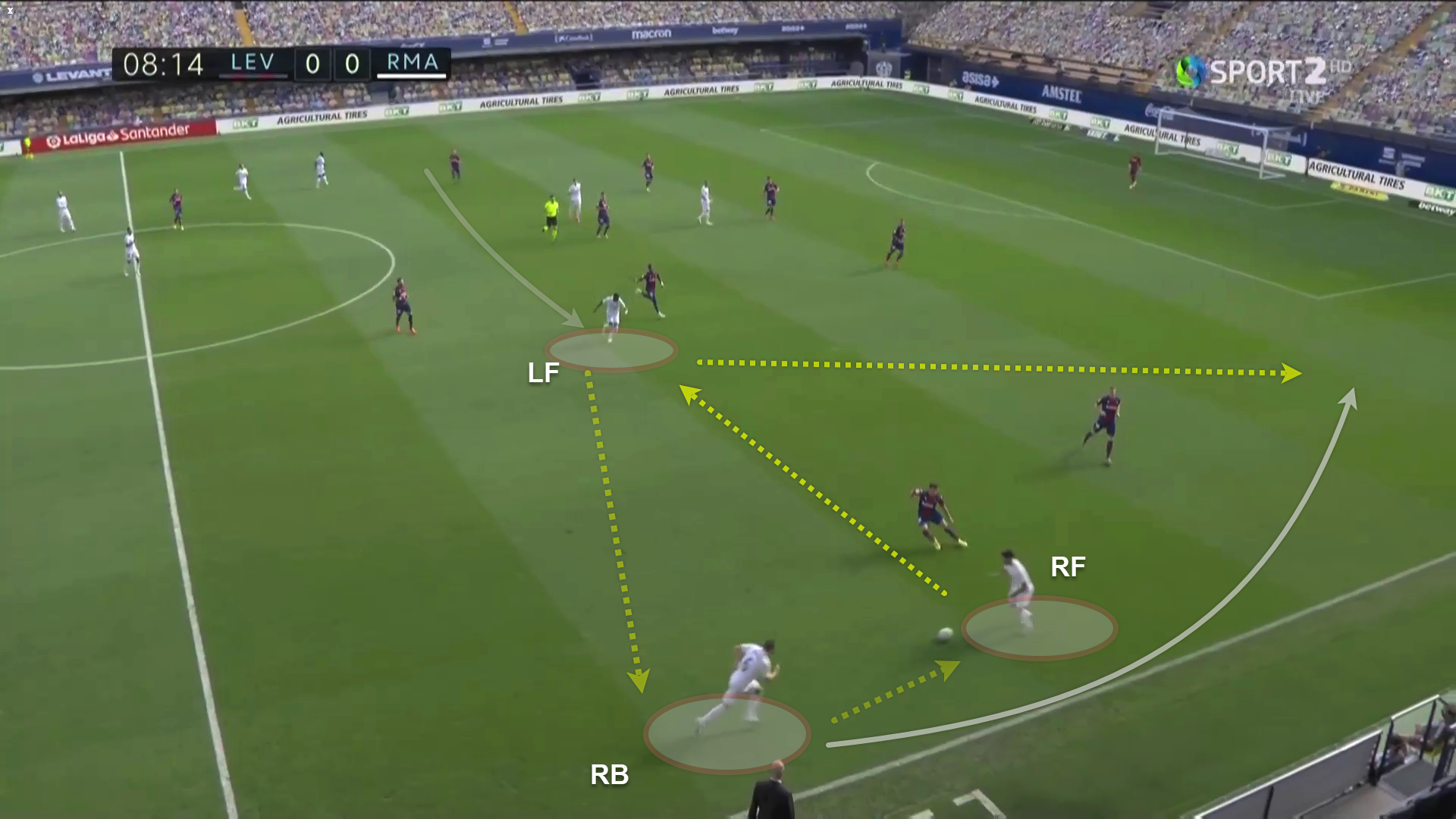 Above, we see another example of a common pattern from Los Blancos. Left-forward Vinícius Júnior picks the ball up on the left side of the field, dribbles across the field with the ball on his safe side and releases a pass to the right-back, Nacho Fernández. Nacho plays a forward pass and overlaps right-forward Marco Asensio who plays back across to combine with Vinícius Júnior. 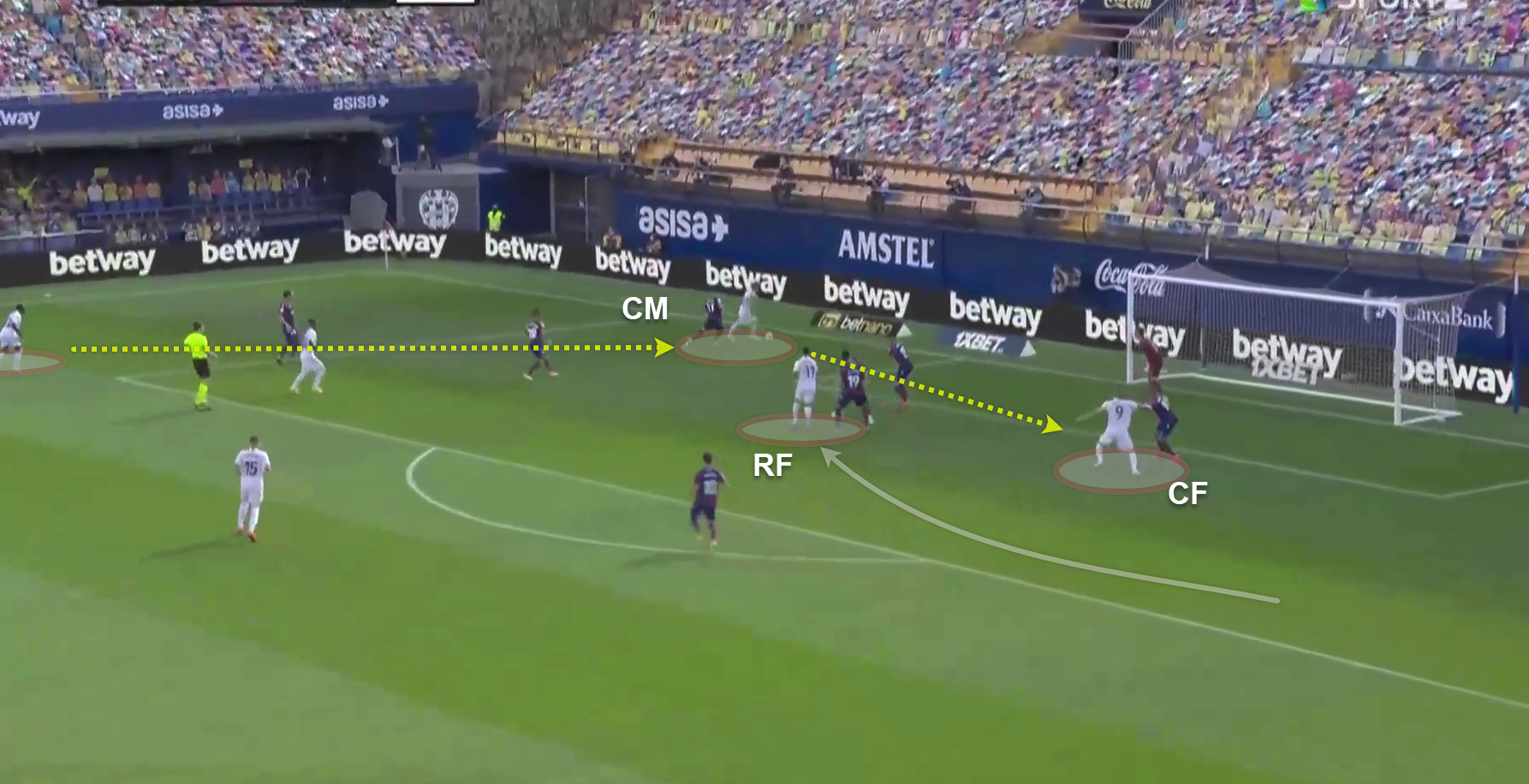 Madrid seemed to keen to create chances to score from the wide areas of the Levante box. Holding the maximum width and creating overloads to release the forward runs of a full-back or midfielder entering the box from the half-space. Above, we see an example of that type of pattern, Luka Modrić makes a forward run to meet a forward pass into the box. With only one-touch, the Croatian delivers a low-cross to the centre-forward Karim Benzema. The French forward was defended tightly and failed to convert on this occasion.

All three aspects above were common patterns in Madrid’s game, but for lack of perfection in the finish at times Madrid could have easily come away with more goals.

Levante target success in the transition

Levante’s chances to attack came few and far between, as they had to absorb the Madrid attack for long periods of the game. The home side did, however, plan to soak up the pressure such that they could release a quick counter-attack on Madrid’s disjointed defence.

Similar to Madrid, Levante came close and can consider themselves unfortunate not to have done better in front of goal. Creating dangerous opportunities from quick counter-attacks which only became possible because of the intense pressing in the final third combined with the ability to play forward early in the transition.

Above we see the moment, Levante central-midfielder Nikola Vukčević wins back possession and plays a forward pass to the centre-forward, Roger Martí. Martí turns and dribbles forward to continue the counter-attack. 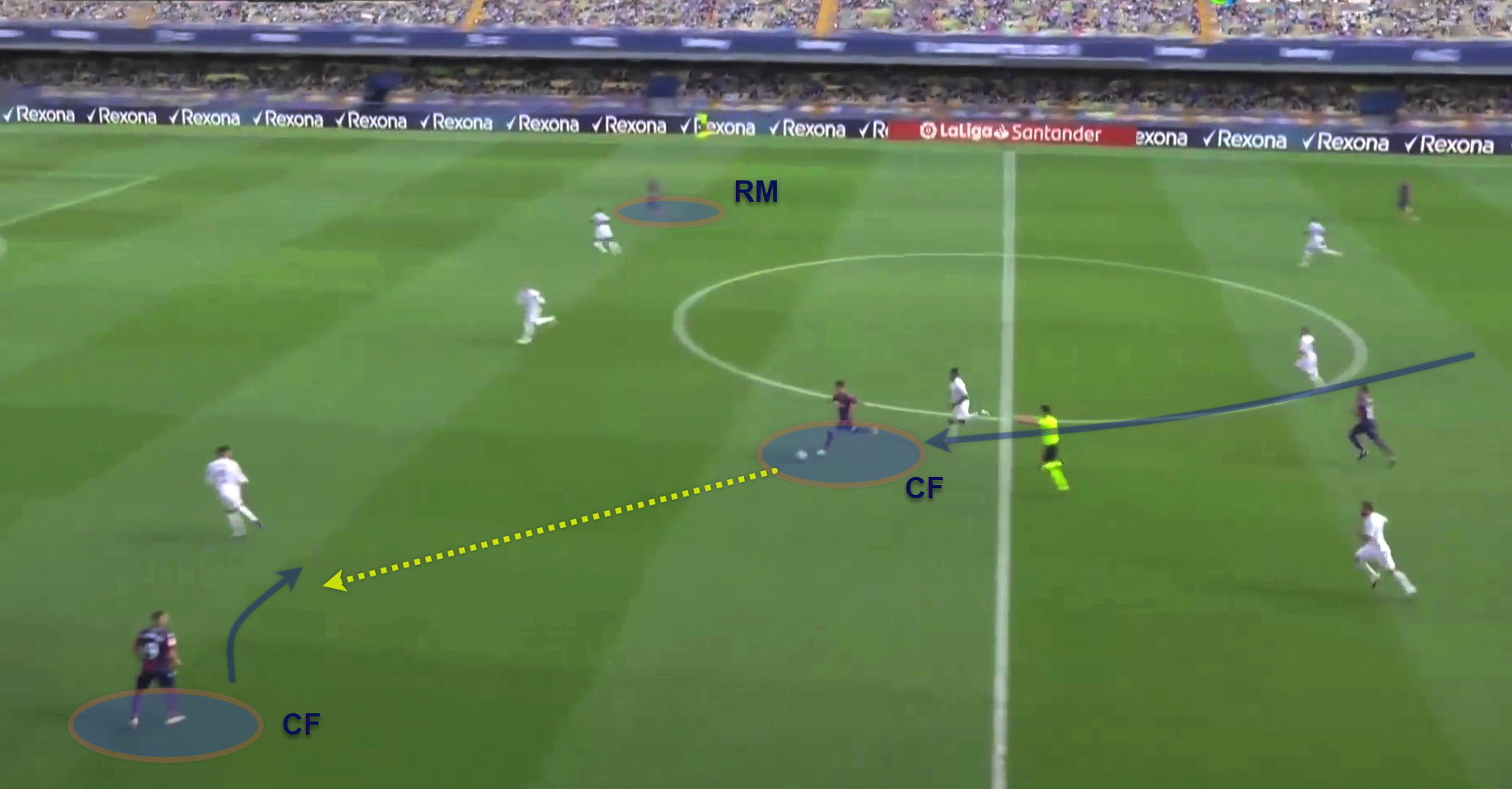 In the next image above, we see Martí carrier the ball into the Madrid half before releasing to the other centre-forward José Luis Morales. In this phase, it is a 3-v-3 with a recovering defender. Notice the starting position of Morales to was positioned in the vacant space behind the advanced right-back of Madrid.

With good movement and overloads in wide areas from Levante at times, Madrid’s CM’s would have to drop in and either defend the half-space or penalty area to meet and defend dangerous crosses. Levante did well to unbalance the Madrid backline at times, getting in behind the Madrid full-back and attacking the space, forcing Madrid to commit a centre-back into the channel. At this point, Levante would have two forwards arrive in the box between the width of the posts to meet a potential cross.

It was these moments Madrid needed to be even quicker in adapting and capable of meeting dangerous crosses. Madrid would achieve balance inside the box by having one central-midfielder, most often Carlos Casimiro acting as a recovering defender, usually getting goal side and touch-tight to one of the two forwards in the box.

Above, is a visual representation of Levante’s crosses into Madrid’s box. Notice the varying degrees and positions of crosses in both halves. The crosses from deep were targeting strikers entering the box before Madrid had time to get defensively organised. 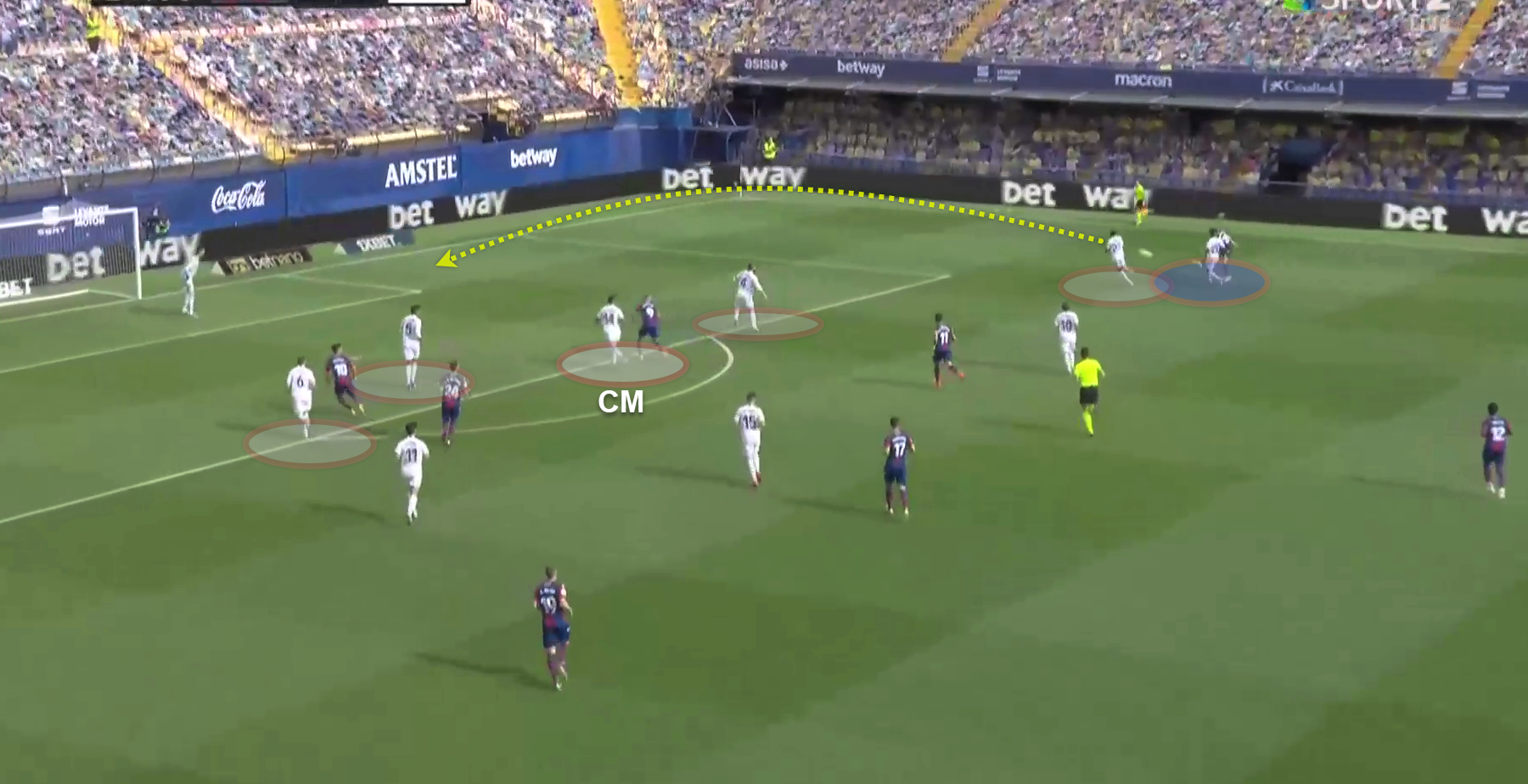 Above, we see a moment Casemiro drops to cover the space vacated by Sergio Ramos, who has to move towards the ball to block lower crosses reaching the goalmouth. The cross is delivered towards the front post, and Casimiro offers an excellent defensive header away out of the box. Casemiro was instrumental in neutralising crosses that reached the box while also tracking midfield runners making late runs towards the penalty area.

Final score Levante 0-2 Real Madrid, the result means Real Madrid go top of the table while Levante remains around the bottom as they have failed to turn their spirited performances into points in the first month of La Liga football.

Madrid was fortunate to come away with all three points while keeping a clean sheet; perhaps it was the gulf in class between both sides that ultimately decided this game. Levante will take a lot of positives from this game as they have proven, to themselves at least, that they can defend against and create chances against the champions.

Lastly, I would be confident Levante will go on to have some head-turning results with these types of performances this season. A bit more clinical finishing in the attacking end and more resolute defending will surely see them topple some big names in La Liga both home and away.