Despite their efforts to postpone the game, Granada, who were on a good run themselves, had to face a red-hot Real Sociedad with a squad virtually made of their academy players. This, unfortunately, is the virus-ridden reality we live in and as LaLiga declined the away team’s pleading, there was only one way the clash was ever going to end.

This tactical analysis will look to dissect just how Real Sociedad got the better of Granada and what tactics were used by both sides. Given the circumstances, the analysis will mostly focus on the first half proceedings since the game as a contest was over even before it even started.

Imanol Alguacil means business in 2020/21 and Real Sociedad are looking like real rivals for the likes of Barcelona and Real Madrid this year. The gaffer decided to field a strong XI despite their opposition being immensely stripped down of quality and personnel. Álex Remiro started in goal and in front of him, a quartet consisting of Joseba Zaldúa, Aritz Elustondo, Robin Le Normand and Nacho Monreal was picked.

Higher up, La Real had David Silva and Mikel Merino either side of the pitch while Martín Zubimendi was usually the deepest of the midfielders. Finally, Adnan Januzaj, Willian José and Mikel Oyarzabal completed the front line.

Real Sociedad were deployed in a 4-3-3 formation. 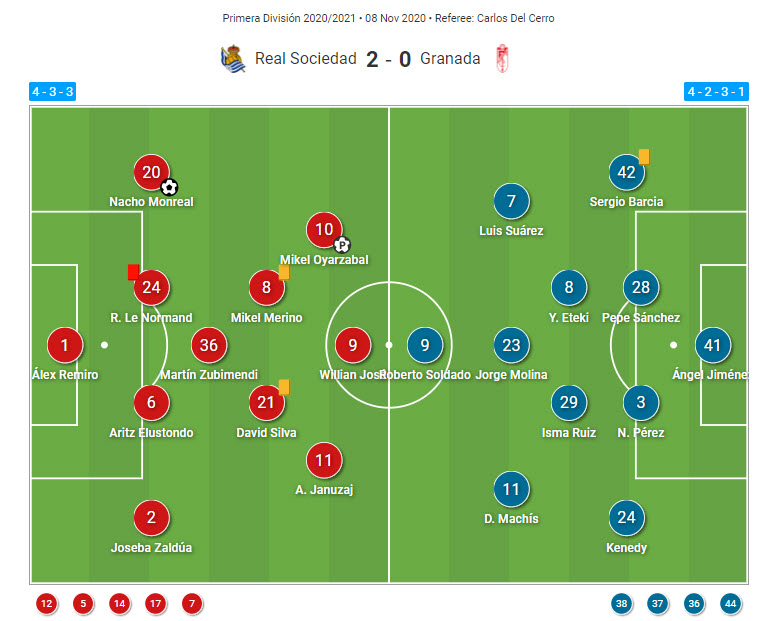 Diego Martínez, on the other hand, had a really tough task of assembling his squad. Only seven first-team players were present in the squad and the starting XI had an average age of only 24. Ángel Jiménez was between the sticks and covered by Sergio Barcia, Pepe Sánchez, Kenedy and the only senior defender in the squad, the 20-year-old Nehuén Pérez.

Yan Brice Eteki and Isma Ruiz were deployed as the double-pivot and ahead of them, a trio consisting of Luis Suárez, Jorge Molina and Darwin Machís. Finally, Roberto Soldado was the lone striker on the day.

Granada were deployed in a 4-2-3-1 structure by their coach.

Alguacil went for a standard 4-3-3 setup in attack and to combat this, Granada were switching between two defensive systems, both of which were mostly sitting in a mid-block. Initially, the guests would deploy a 4-2-3-1 structure, similar to their original setup, but would then swap to a 4-4-2 once the sides were switching rapidly.

You can see how those two formations interacted with each other in the graphic down below. The image depicts Real Sociedad on the ball and some of their main ways of progressing the play up the pitch. 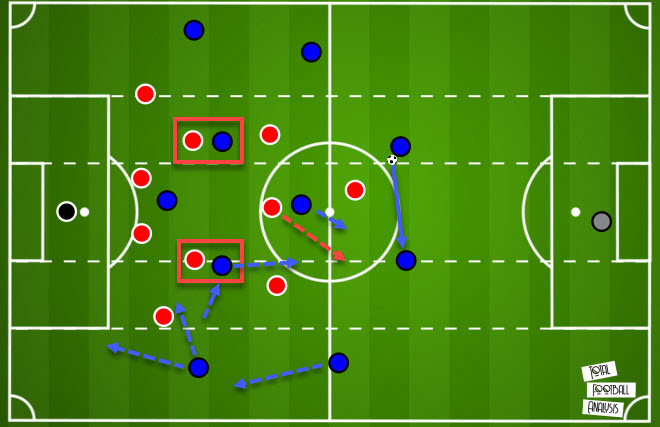 Let’s see what Granada’s idea was in their 4-2-3-1 first. There are a couple of things to note here. Firstly, Ruiz and Eteki were instructed to stick tightly to Real Sociedad’s floating no.8s, man-marking them as they tried roaming between the lines. Molina, on the other hand, would stick closer to Zubimendi at first but as the ball was recycled towards the flanks, he would often join Soldado up front .

That switch would turn their defensive structure into a flat 4-4-2 and Zubimendi would then find himself between the striker duo. Real Sociedad used that to their advantage. Generally, they didn’t have much trouble progressing up the pitch and thus, creating chances. Initially, with Granada in their 4-2-3-1 defensive tactics, Real Sociedad’s centre-backs could run with the ball, easily bypassing Soldado on the way.

When the guests pushed Molina up from the second line to combat the 2v1 numerical inferiority, Real Sociedad would either use Zubimendi to regain the superior position in a 3v2 or would use one of the full-backs as the third man in the backline. There were actually a couple of mechanisms that were used in their ball-progression tactics, first of which can be seen below. 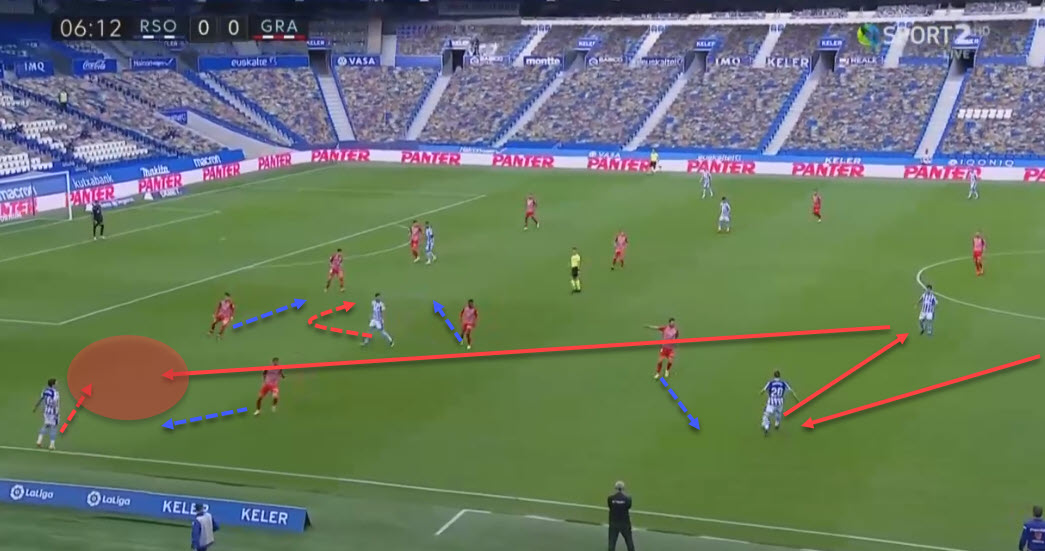 As the ball is recycled from right to left, Granada switch to a 4-4-2 and Molina pushes up to the first line. Here, Nacho is deep and can receive from his centre-back, also attracting Molina’s attention. However, Real Sociedad were able to utilise side-swaps effectively to break away from their markers. Notice above how Zubimendi is suddenly free to receive a pass from Nacho as Molina now has to mark the former player.

Soldado is late to react and the midfielder can receive in a favourable position. Creating triangles between the single pivot and either the two centre-backs or one centre-back, pivot and one full-back was an effective way of maintaining the 3v2 numerical superiority in the first phase of play.

But it’s the relationship between Merino and Oyarzabal that truly broke Granada. In the above example, the former cuts inside to his half-space, dragging both of his markers centrally, while the latter stays wide and is now in an isolated 1v1 duel. Real Sociedad kept creating these scenarios, especially on the left side, as they knew hardly anyone could deal with the 23-year-old Spaniard on his day.

Another option was for Merino to drop deeper, manipulating the man-marking tendencies of Granada’s pivots, and opening up a pocket of space for Oyarzabal to move into. In that case, Merino was the third man in the backline, allowing Nacho to overlap. 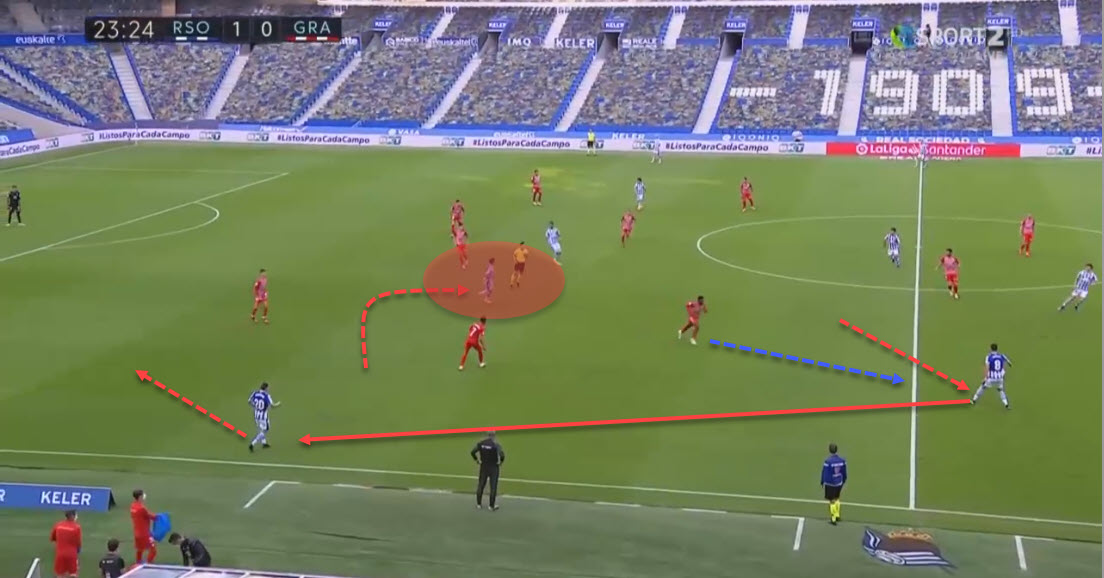 Notice how the ball is then progressed directly to the left-back, who charges forward into the final third, and then deploys a cut-back into Oyarzabal’s feet as the Spaniard is completely unmarked.

Merino could also move up instead of down, once again dragging his marker and again, opening up a pocket in the left half-space for his teammate. This time, with the other midfielder occupying a wider position, Oyarzabal cuts inside himself and can then swap flanks or deploy a ball in-behind the defensive line of Granada.

On the other side of the pitch, both Silva and Januzaj would be ready to make a run into space in anticipation of a pass over the top. With 0.94 xG from 21 attacks, however, the left side was more dangerous than the right, which amassed a total of 0.72 xG from 16. 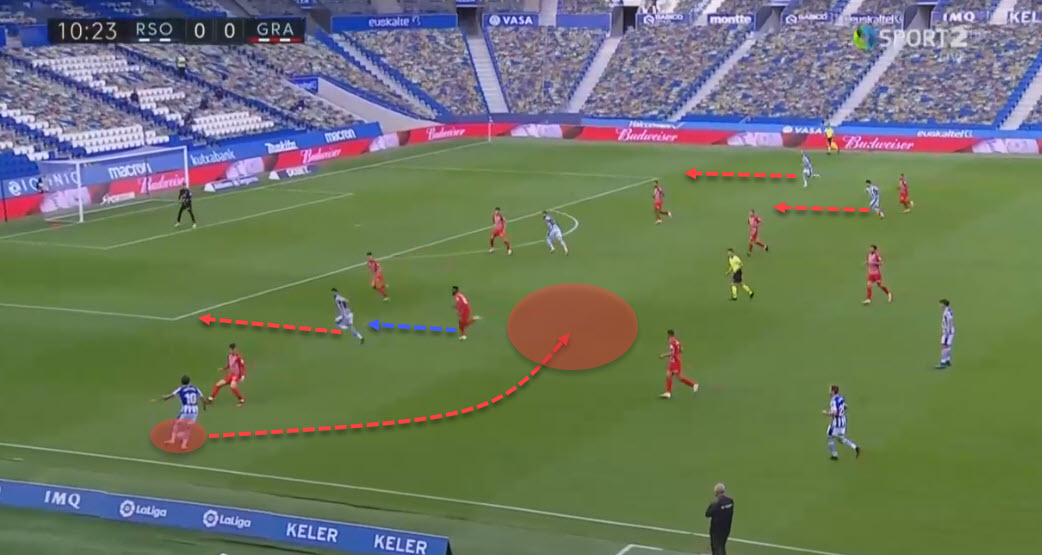 Finally, there was also an option for Real Sociedad to instruct both Oyarzabal and Merino to occupy the half-space, albeit on staggered lines, which would usually force the defenders to tuck inside as well.

You can see a similar example of that down below as Nacho gets all the freedom in the world and the whole flank for himself. This is due to all the markers being occupied by both Merino and Oyarzabal. 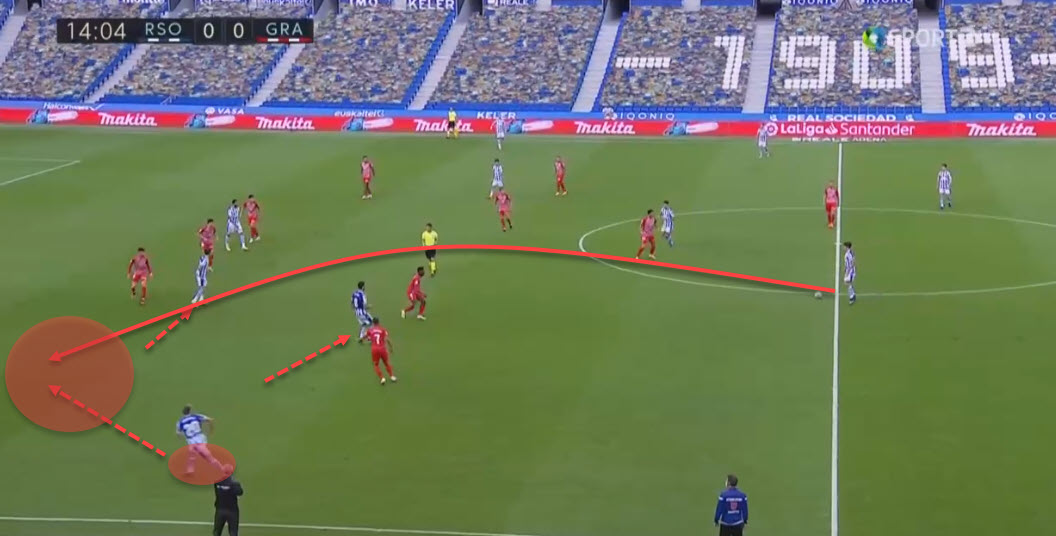 Granada were mostly in a narrow defensive structure and Real Sociedad were great at manipulating their movement to open up space towards the final third.

This part of the tactical analysis will deal with Granada’s attacking tactics and how Real Sociedad set up in defence. It has to be said, however, that the away side had practically no chance with 0.21 attacks per minute and a total of 0.76 xG, courtesy of a late penalty kick, which they unfortunately missed.

When it comes to open play, there was not much they could do. Granada would build up from their two centre-backs and Eteki as the deeper midfielder to support the backline. Real Sociedad, on the other hand, approached them in 4-1-4-1 defensive tactics, as can be seen in the graph below. 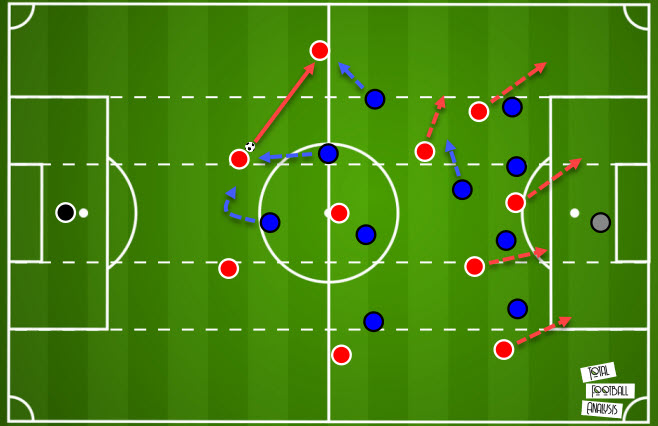 Interestingly, in the attacking phase, Granada were focused on finding the runners in-behind the opposition’s defence and would often have four or five players on the shoulder of Real Sociedad’s backline. One of the midfielders, often Ruiz, would drift across the final third in an attempt to receive a pass in pockets of space between the lines.

Eteki was used to lay the balls off and relieve the pressure coming from Real Sociedad. With mostly José leading the home team’s press, the combination of the two centre-backs and a dropping pivot was enough to progress the ball and deploy it towards the flanks.

You can see a similar example down below.

Of course, it wasn’t always that easy to bypass the press. Real Sociedad’s 4-1-4-1 would quickly transform as the midfielders pushed up to face the defensive line of Granada. Their shape would often look something like a 5-3-2, 4-1-3-2 or a 4-4-2, depending on how highly and aggressively they push forward.

The basic concept of their pressing tactics can be seen in the initial graphic in this section but some general patterns are worth highlighting. José was the one to press the highest, often tracking the ball to the goalkeeper and then using a curving run to shut off the passing lanes to one of the closest options.

Januzaj and Oyarzabal would then cover the wide options while the central midfielders pushed up as well. You can see a similar approach in the example below.

And we know the press worked very well and was extremely intense. Firstly, if we take a look at Real Sociedad’s PPDA (passes allowed per defensive action), it was 6.1 in total across both halves, as opposed to Granada’s 22.1. Quite clearly, the difference is huge, as is the case with most of the other stats.

But Granada’s losses, especially in the first half, are perhaps the biggest indication of how well the press worked for Real Sociedad. You can see below that there were a total of four losses resulting in a shot on goal in the first 45 minutes. 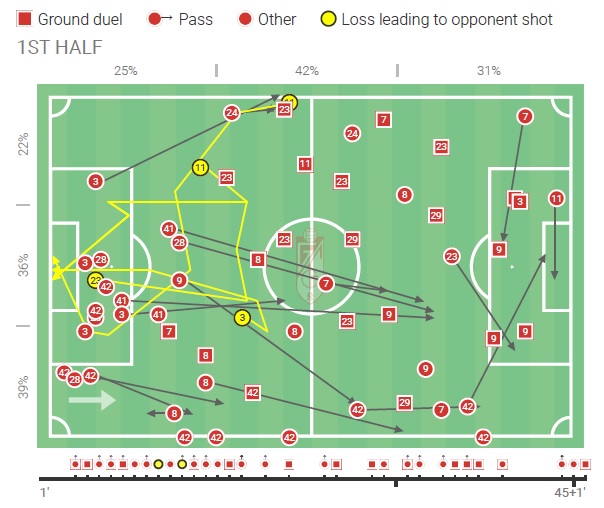 At the end of the day, with only two shots (one on target), a total of just 11 positional attacks, none of which resulted in a goal attempt, Granada were simply outgunned. Sadly, that was more due to outside circumstances and not because of their lacking tactics.

Football, unfortunately, can be a cruel thing like that.

It has to be said that this was not a fair fight and instead of a classic LaLiga thriller, we got a heavily one-sided clash. However, Real Sociedad will be happy with the three points and the tactics that were on display against a tough opponent.

Granada, of course, were hard done by the federation and it’s a shame things had to end this way. The season, however, is long and there’s still time for them to continue the great work they’ve been doing since the start of the campaign.