Real Madrid had a golden opportunity to extend their lead at the top of La Liga over the weekend and while Barcelona didn’t slip up as they beat Villarreal, Real Madrid maintained their four-point lead by seeing off a plucky Athletic Club side.

In the end, there would be just one goal and it would come from the penalty spot for Real Madrid as Sergio Ramos converted after Dani García felled Marcelo inside the box. Ramos duly converted and it was enough to get the three points that the visitors were after.

This tactical analysis will provide analysis of the tactics of Zinedine Zidane and Gaizka Garitano as they clashed in this La Liga fixture at San Mamés. 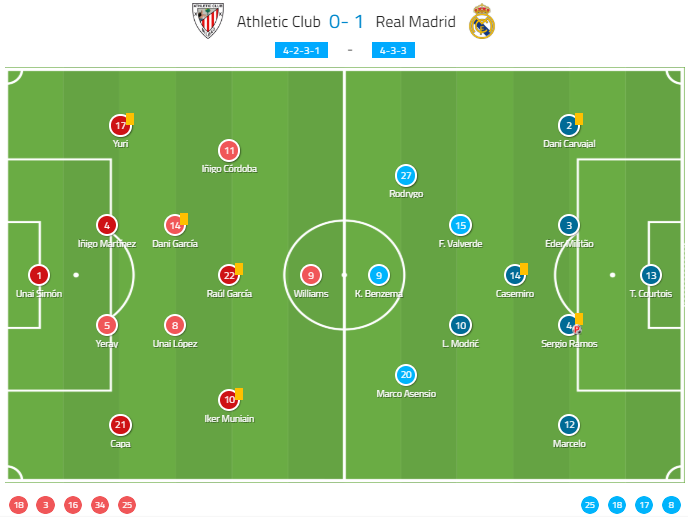 There had been speculation that Athletic Club would opt to rest key figures for this tie, but it was not the case as Yuri Berchiche recovered from injury in order to start with Rául García starting behind Iñaki Williams in attack and Iker Muniain also starting on the right of midfield.

Real Madrid surprised many with their team selection as Toni Kroos was left out while Marco Asensio and Rodrygo Goes both came into attack. In defence, Éder Militão replaced Raphael Varane after he fell ill in midweek. Significantly, yellow cards for Sergio Ramos and Casemiro mean both will miss the next fixture against Alavés.

From the off, it was evident that Athletic’s rigid defensive structure and solid central column would mean that they would rely upon Williams’ pace and movement in attack to shift the ball wide and then link up with the movement of Iñigo Córdoba and Muniain on the flanks. Early on in the game, he was clearly targeting Militão to see if he could drag the central defender in order to create space for Raúl García to move up from deep and arrive late into the final third. With Dani Carvajal sitting deep and Militão defending well, Williams moved over to the right shortly after.

With 22 Athletic attacks coming down the wings, the greatest success came down the right. Marcelo continued to show a lack of defensive discipline and Williams would hold off his run before looking to beat Ramos for pace. Below, you can see the perfect example of how Marcelo lost the ball and was slow to track back, with Athletic countering quickly. As Williams made the run wide, Ramos stepped up but this only made it easier for Williams to turn him with the ball over the top and beat him for pace, setting him through.

This approach was very similar to the attacking strategy used by Garitano when Athletic went to the Bernabéu, where they attacked even more sparingly in a 0-0 draw. The last time Williams made more than the three progressive runs in a single game in La Liga recorded against Real Madrid was in that reverse fixture earlier this season, other than the one performance against Real Valladolid. If he had the end product or finishing to be able to convert these moves into a goal, Real Madrid would have been in trouble.

Zidane was quick to react and, particularly on the right-hand side, did so well. Carvajal sat into a deeper role and was more reluctant to burst forward into attack. Rather than providing an overlapping or underlapping option for Rodrygo as he usually does, he instead would play the ball into midfield and allow Fede Valverde to make that run, as can be seen in these images here.

This allowed Carvajal to remain deep and provide greater support for Militão in defence, with Valverde taking up the attacking risk of being caught out of position. He could do so comfortably with Casemiro willing to move across and was often found forming more of a double pivot alongside Luka Modrić with the duo allowing Valverde to break forwards without opening up any spaces in the Real Madrid defensive unit.

What was perhaps surprising was that Modrić did not do so on the left, allowing Marcelo to continue to move forwards and leave gaps in the defence on his side. Given his lack of athleticism as he ages, Modrić could not provide the same option on that flank. With Marcelo and Asensio connecting well, it was not necessary and Modrić could sit in a deeper role and look to provide a pivot to protect the backline, rather than prevent Marcelo from going forwards.

In the Real Madrid attack, one of the most significant causes of their slow and sluggish attacking play came through a lack of connection between the front three. Without Eden Hazard, who missed the tie through injury, we again saw that there was little movement and inter-connecting play between the front line. This time, it featured a new looking front three as Karim Benzema lined up alongside Asensio and Rodrygo for the first time, with Asensio unusually deployed on the left and no interchanging between the wide men.

The player to struggle the most was Rodrygo. Though the Brazilian has been impressive at times, such as when he excelled in the UEFA Champions League as he scored a hat-trick against Galatasaray earlier this season, he again struggled against a team defending with a structured low block. He became isolated on the right, particularly as Carvajal sat deeper, and his movement was often too slow. Moves would spread the ball to him and he would take too long to decide what to do and would slow the pace of the game as he didn’t have spaces or openings to run into ahead of him as he enjoys against defensively weaker opposition.

What was noticeable was that it was not the same on the left, where Asensio linked up with Benzema more and was far more influential in the final third when on the ball. While Rodrygo received 31 passes and Asensio received 34, what they did with the ball shows a real difference. Asensio completed four passes into the final third and a further four into the box, compared to just two from Rodrygo, with 0 xA for the Brazilian and 0.62 xA for Asensio. Coming as Asensio’s first start of the season, the patience afforded to Rodrygo may be cut short by the impact made by his teammate despite his young age and Asensio’s greater integration into the side.

In this final image, we can see the move that did lead to a goal as Marcelo won a penalty which Ramos converted. In this move, it came through link-up play between Asensio and Benzema which was not seen regularly enough. Benzema drifted to the left and kept Marcelo’s pass in play, with Asensio anticipating the cut-back and playing the dangerous pass into the box for Marcelo who was tripped. Such movement and connection between these three players was crucial to securing the win but was missing on the right flank.

As can be seen in this analysis, much of this tie was decided in the wide areas. While Athletic were more dangerous, they lacked end product and in the end it would be Real Madrid who would get the slice of luck from a penalty call to win the game. Athletic’s defensive solidity and organisation were enough for them to deserve a point from the game, much like it had been at the Bernabéu earlier this season, but their lack of cutting edge in front of goal came back to bite them as it has too often this season.

Zidane will be pleased that his team, even with some important players missing through injury and rotation, could grind out the result. They frequently adapted and changed their system in order to counteract the strategy of Athletic and their players did so well. A lack of fluidity in attack with a front three lining up together for the first time, two of whom have not started for the team for some time, may be expected. As such, it was a perhaps surprising choice from the coach, but did not cost his team points in a tight title race.

Both coaches will be pleased with the performances of their sides, while Garitano may feel that despite the result, his side won the tactical battle. Their struggles to get out of first gear and go from structured defending and relying on counterattacking wide runs to a more coordinated team-wide attack after conceding a penalty would not help his side. It would ultimately cost them any hopes of picking up a point at San Mamés despite a strong and efficient defensive performance which almost shut out one of La Liga’s most dangerous attacking outfits for a second time this season.