Italy finished their match against Iceland with a draw that doesn’t suit the two teams yet keeps their qualification chances alive ahead of the third and last UEFA Women’s Euro 2022 group stage fixture. In fact, France are actually the leader of group D with six points thanks to two wins against Italy and Belgium. At the same time, Iceland were successful in collecting two points out of their two games played against Belgium and Italy, while having to face France in the final fixture, and that’s what limits their qualification possibilities.

On the other side, Italy suffered a heavy 5-1 loss against France in the first fixture and that clearly affected their morale and changed their plans. And after drawing against Iceland, Italy put themselves in a risky situation that requires three points from their next Belgium match by any means, otherwise, Italy will not be able to qualify for the quarter-finals. In this tactical analysis article, the focus will mainly be on Italy’s performance. The analysis will look at Italy’s attacking performance to explore what they lacked in order to win and what went well for them while at the same time looking at how Iceland exploited Italy’s defensive fragility to score their early goal.

Italy’s head coach, Milena Bertolini, preferred to change from the 4-3-3 formation used against France and rely on the 4-4-2 in order to make use of two strikers upfront and have two defensive lines of four each. The team was made up of Milan’s Laura Giuliani, Lucia Di Guglielmo, Juventus’s Sara Gama, Elena Linari and Lisa Boattin in defence, Martina Rosucci and  Inter Milan’s Flamini Simonetti as central midfielders, Valentina Bergamaschi and Arianna Caruso on the wings while Martina Piemonte and Valentina Giacinti formed the team’s attacking duo, knowing that Cristiana Girelli was subbed on for Piemonte during the second-half. Moreover, one of the best Serie A players, Barbara Bonansea, was subbed on at the start of the second half as well to replace Caruso and give the assist for the Azzurre’s first and sole goal.

On the other side, Iceland’s head coach, Jón Þór Hauksson, started the match according to the 4-3-3 formation with Sandra Sigurðardóttir as a goalkeeper, Elísa Viðarsdóttir, Glódís Perla Viggósdóttir, Guðrún Arnardóttir and Hallbera Guðný Gísladóttir in defence, Sara Björk Gunnarsdóttir, Dagný Brynjarsdóttir and Gunnhildur Yrsa Jónsdóttir as central midfielders, Karólína Lea Vilhjálmsdóttir and Sveindís Jane Jónsdóttir on the wings while Berglind Björg Þorvaldsdóttir was the team’s striker. 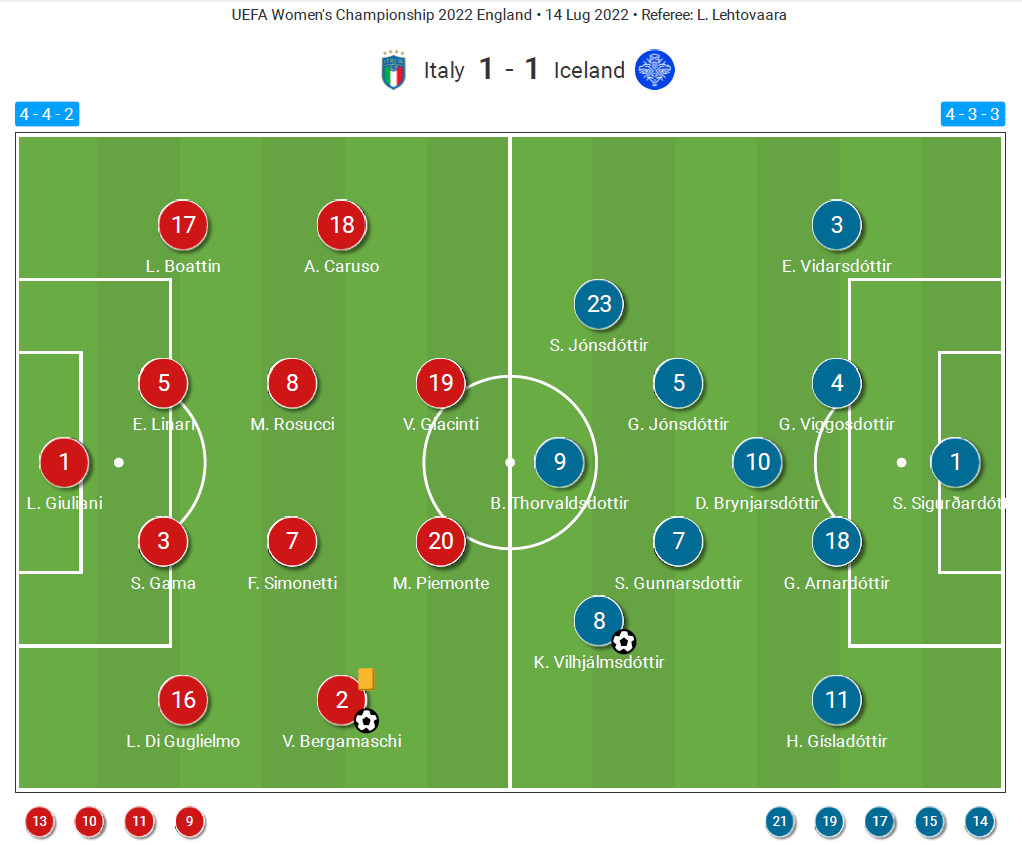 Iceland knew how to approach this game and how to snatch their needed point by being able to score early in the game before retreating and relying on their defensive resistance to prevent Italy from equalising. And although Italy succeeded in scoring during the second half, Iceland kept resisting and didn’t allow Italy to win the match despite conceding numerous opportunities, especially during the second half when Italy completely believed in their winning chances and attacked with all their strength. However, Iceland’s goalkeeper was attentive enough during most opportunities especially when defenders were not able to stop the Italian attacks.

But way before that difficult period for Iceland, they were able to score a beautiful goal from a long throw-in that was deflected and the ball came near Vilhjálmsdóttir who did not hesitate and shot the ball with great power and precision.

As you can see in the picture, Bergamaschi is partly responsible for conceding this goal along with the whole defence as she was marking Vilhjálmsdóttir in an unefficient way. Bergamaschi left her direct opponent at her back, allowing her to move freely. Letting opponents behind doesn’t allow the marker to detect the opponent’s movement quickly, instead, the attacker gains precious seconds when being marked in this way and that’s exactly how Vilhjálmsdóttir got the advantage on Bergamaschi in this duel and was able to score a precious goal for her team. 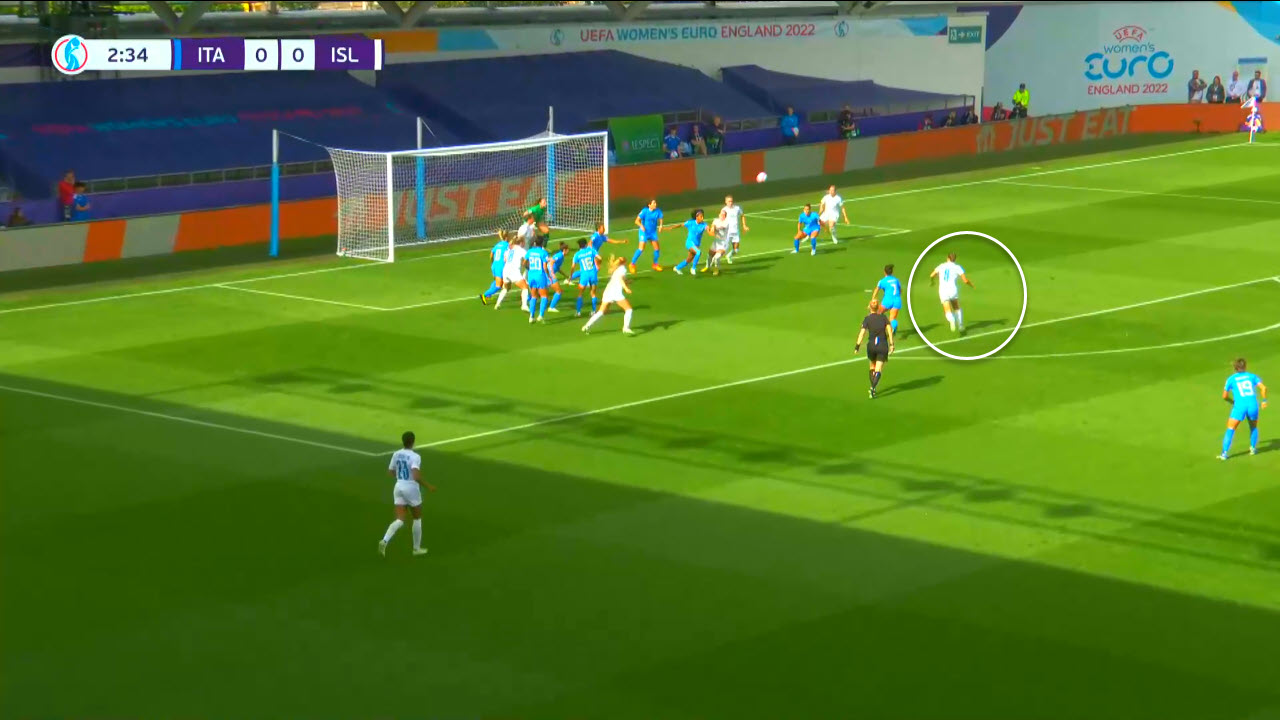 Italy didn’t start the match with the right mentality and conceding an early goal made things even more complicated for them. The doubt and fear of losing their qualification ticket made the team fall into the trap of unnecessary hurry that led to unaccurate shots and to having fewer ideas in the final third. The Italian players resorted to shooting from distance so often especially during the first half but their shots have always lacked accuracy and power, such as the example shows. 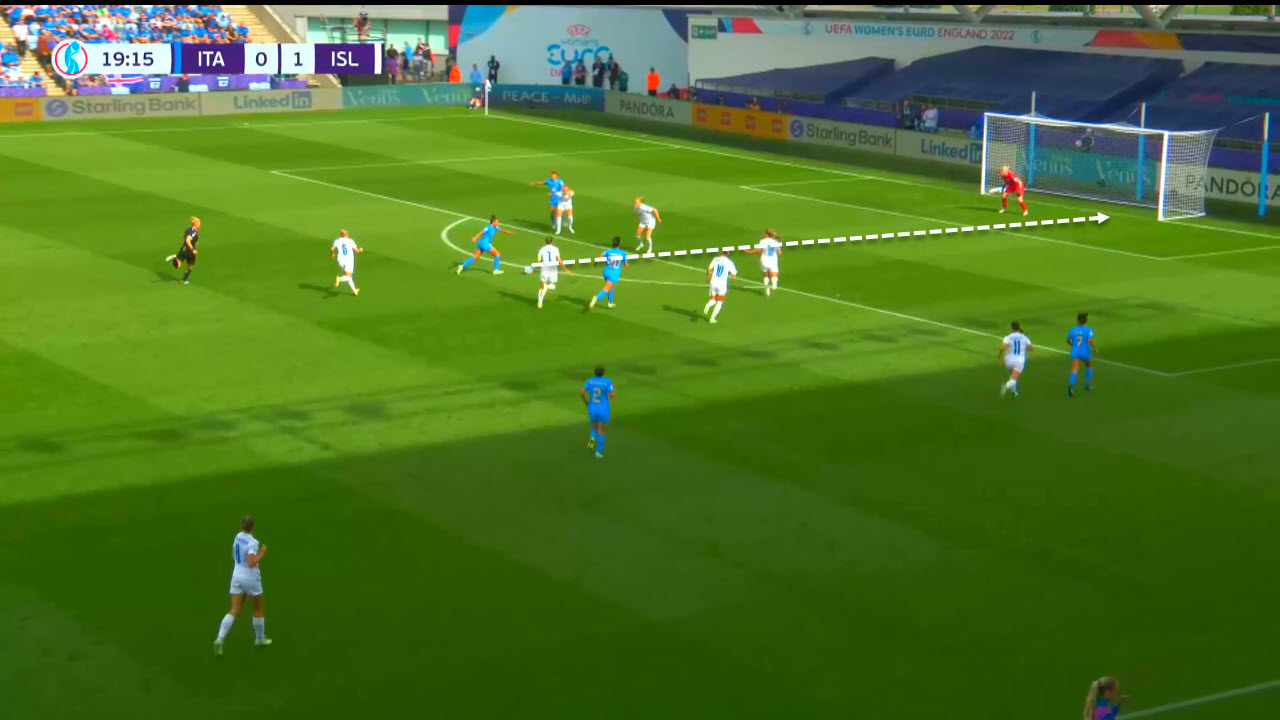 Moreover, Italy tended to use the right wing so often and at the expense of the left one. And that made their actions more predictable to Iceland’s defensive line which was prepared for intercepting the crosses that came from that wing. The Azzurre kept trying to cross from the right-wing regularly during the first half but Iceland’s defenders were better in the air. The reason that led to the excess of use of the right-wing was mainly that the left-wing included Caruso, whose characteristics are of a defensive/central midfielder and not a winger.

Bertolini should have started the match with a player like Bonansea on that wing to have more balance between the wings and more variety in attacks. It is true that Bertolini corrected that mistake by subbing Bonansea on at the start of the second half, but that was unfortunately too late for Italy. Bonansea was able to provide a great addition, balance and dynamism to Italy’s attacks but the team was only able to score one goal. 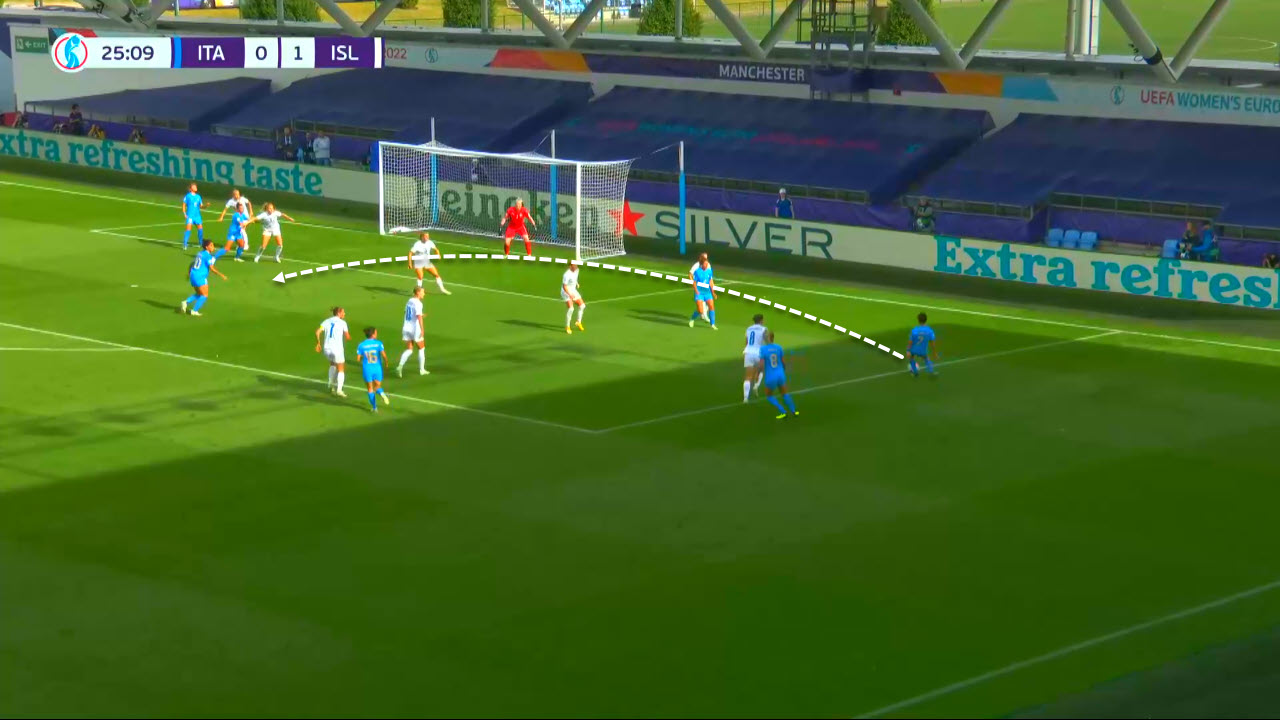 The team was even more aggressive during the second half as they pressed high and prevented Iceland from playing easily from the back. That was fundamental for Italy and it showed that the Azzurre were aiming to turn the table and prove their worth. Their efforts were concretised thanks to an excellent individual effort from Bonansea who advanced on the left wing and provided an assist to Bergamaschi who finished the action with a powerful shot despite being disturbed. 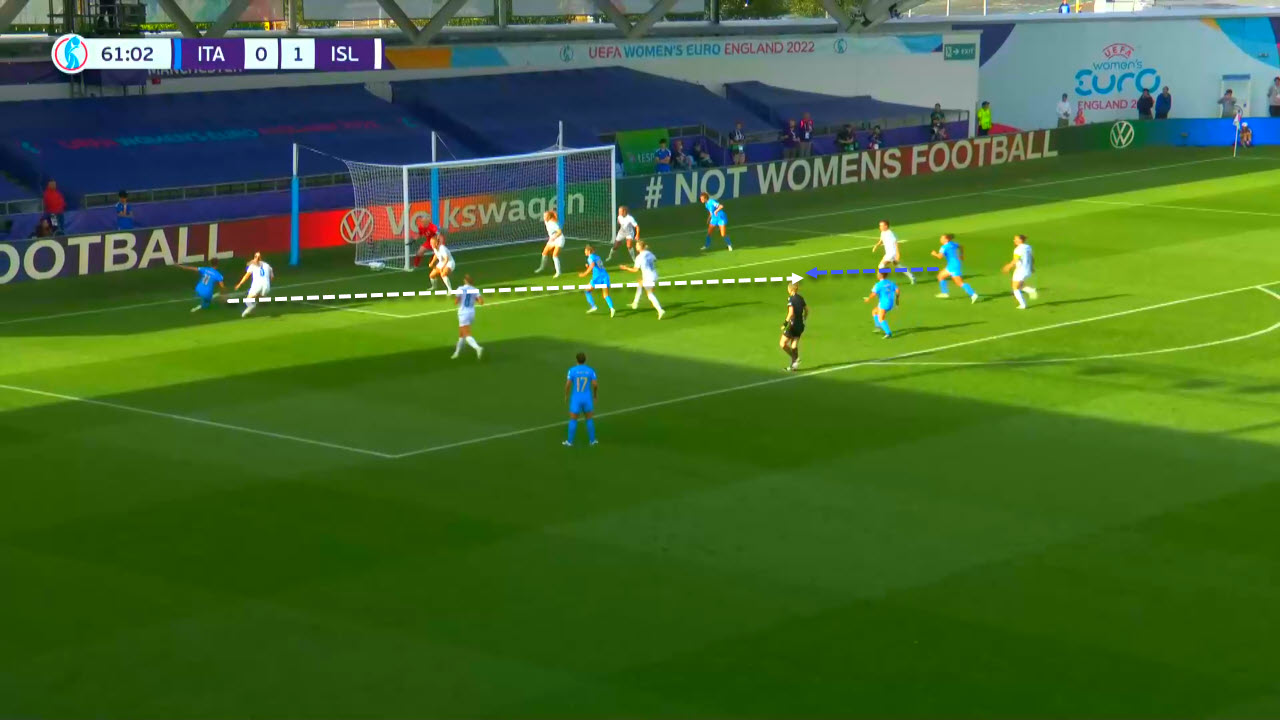 Later on, Italy continued their attacks but what lacked in their attempts was their finishing. The team reached the box and created space for themselves and especially for the strikers, but then their shooting wasn’t as good as needed in order to confuse Iceland’s goalkeeper. 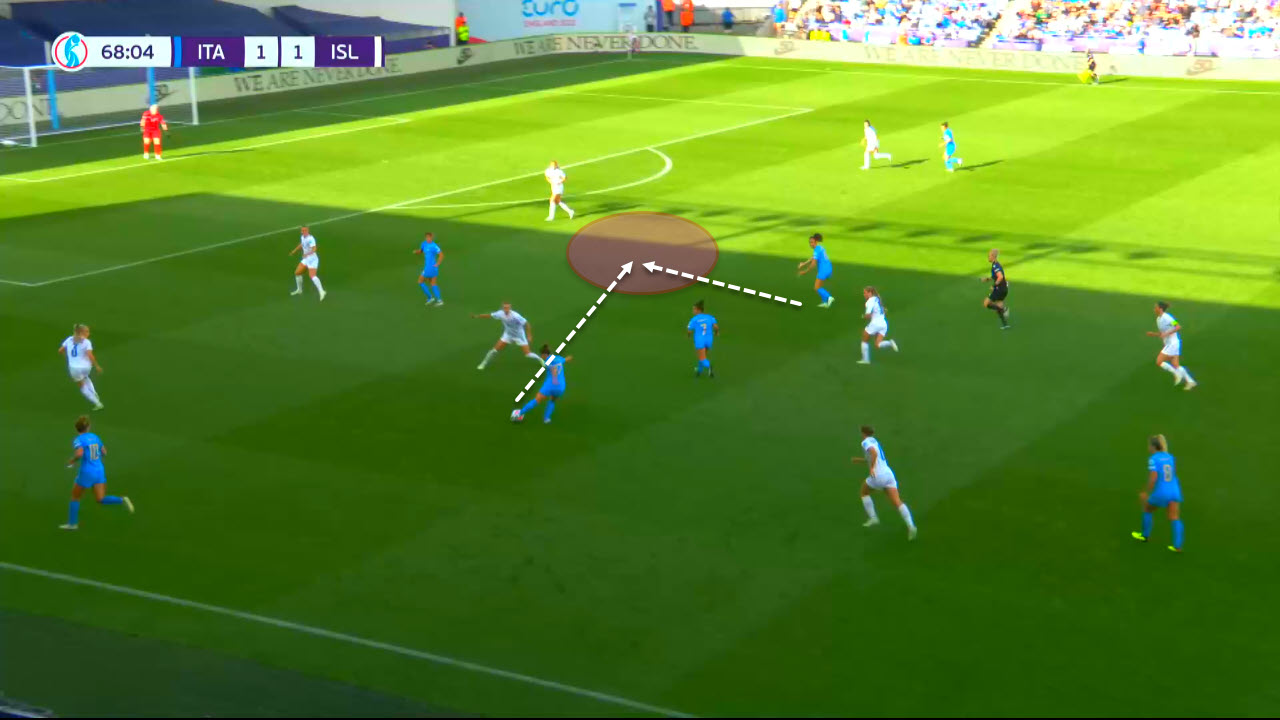 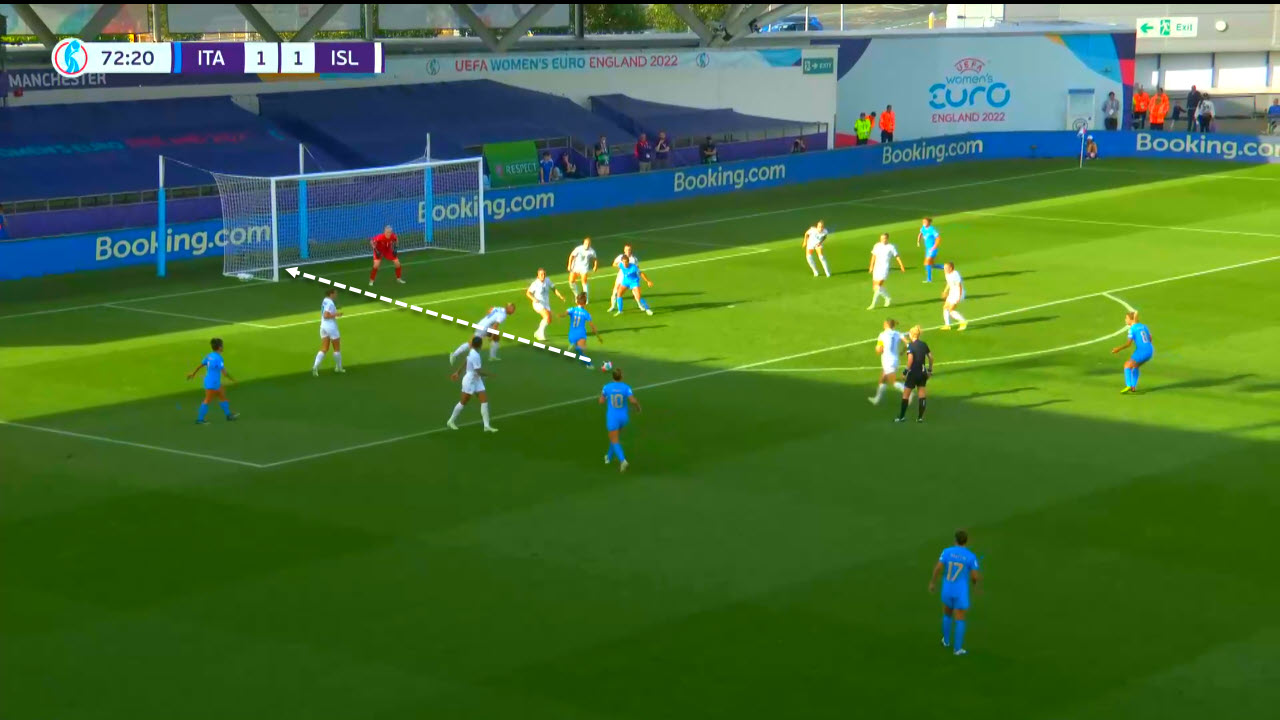 As you can see in these examples, Bonansea, Girelli, Simonetti, Piemonte and Giacinti all aimed to shoot at goal but all their shots were not good enough to disturb Iceland’s goal, and that’s why they need to work more on this aspect in training ahead of facing Belgium. 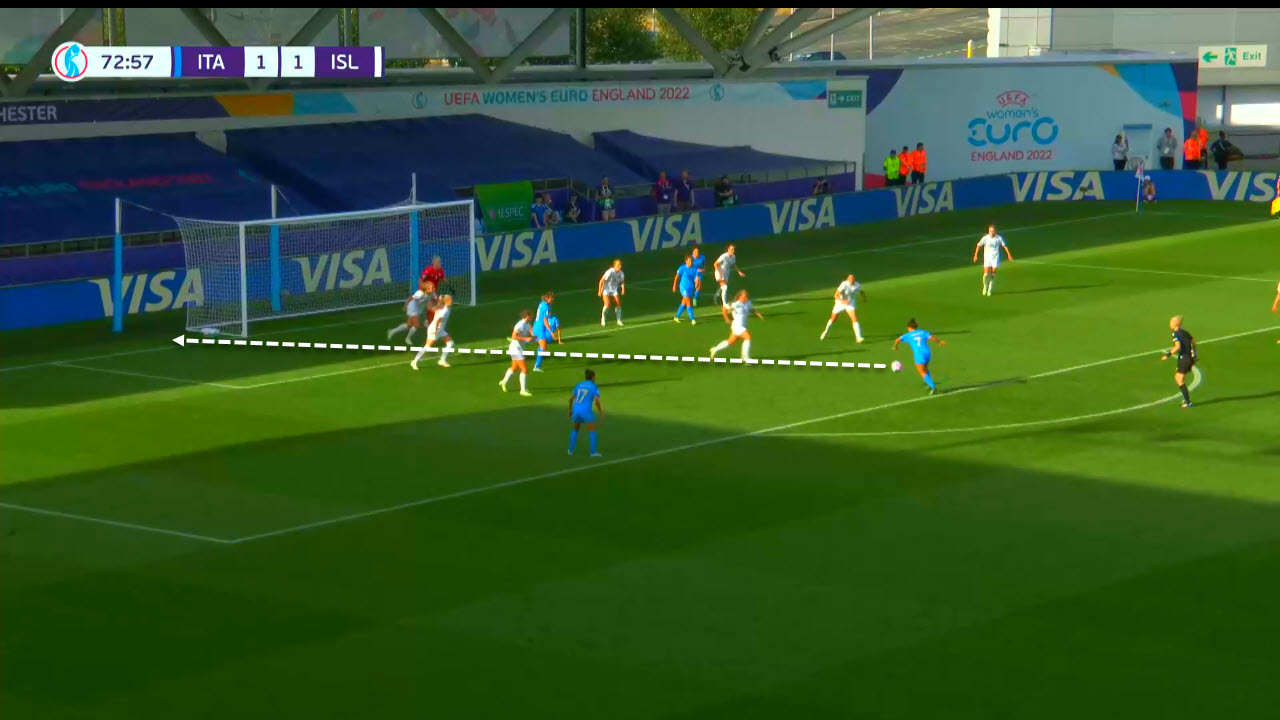 Iceland should be proud of their performances so far despite the fact that they could have won this match if they resisted more and if they exploited the few chances they got during the match. Collecting two points from two difficult games gives Iceland a lot of hope for qualification, especially if they overcome England’s test.

Italy however will need to work more on the defensive aspects of the game in order to avoid making dangerous mistakes in the next match. Moreover, they will have to be more clinical upfront if they want to qualify.