Portland Thorns hosted Angel City at Providence Park for the NWSL’s sixth fixture of the season and the game ended with a deserved 3-0 win for the hosts after being able to score three goals and conserve their lead throughout the match despite Angel City’s few attempts. In fact, Portland Thorns looked more dangerous during this match as they created opportunities continuously and could have scored even more goals, in addition not only to the three scored goals but also to Janine Beckie’s disallowed goal following the first Portland Thorns’ strike.

It was a very important win for Portland Thorns as it helped them end their previous bad run of form knowing that they lost against Houston Dash, and drew against Chicago Red Stars and against Washington Spirit in their last three games. Following this win, they are now sharing the fourth spot with nine points alongside Angel City, Gotham FC and OL Reign. Angel City started their first-ever NWSL season with a lot of confidence and determination, winning three games out of five before meeting Portland Thorns. However, they will need to be more consistent in terms of results and try to avoid conceding losses at least, even though this is not as easy as it sounds.

On the other side, Angel City opted for the 4-2-3-1 formation including Bosnia’s goalkeeper Dijana Haračić, Tyler Lussi, Megan Reid, Vanessa Gilles and former Chelsea and Bayern Munich’s Ali Riley in defence. The midfield was made up of Clarisse Le Bihan and Cari Roccaro as central midfielders while former Racing Louisville player Savannah McCaskill played as an advanced playmaker with both Japan international Jun Endo and former Manchester United Women forward Christen Press on both wings in support of the striker, Simone Charley. 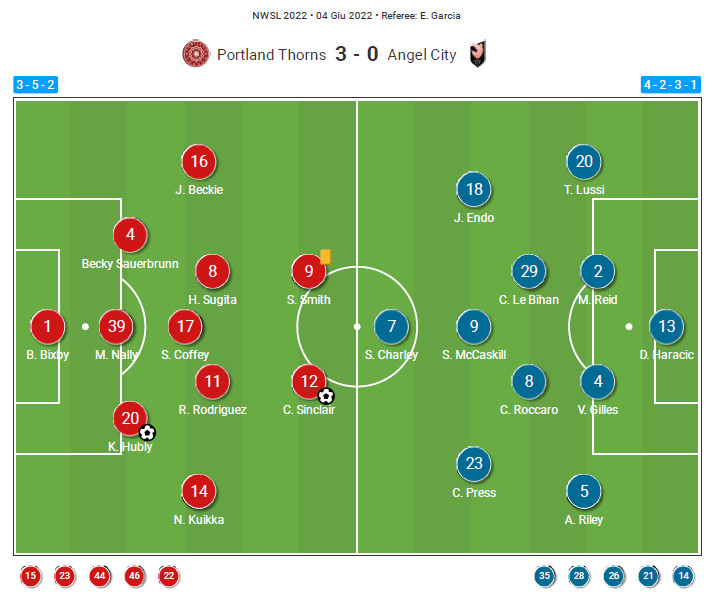 Portland Thorns started this match with immediate goalscoring attempts as they were quickly able to reach Angel City’s penalty box by using the wings to reach one of Smith or Sinclair, as one of the two was always leaning on the wings in order to get defenders out of the box and oblige them to follow the striker while the other striker tries to find space inside the box. That happened several times in this match and Smith was usually the player who received the ball on the wing, fixed her direct opponents and did her best to serve Sinclair who was always waiting inside the box.

Smith’s dribbling skills as well as her excellent physical abilities allowed her to get past one, two and sometimes three defenders while still being able to provide an accurate through pass to Sinclair. The latter timed the anticipations of her markers’ movements very well too in order to get the ball before they reached it. And her final touch was often good too, knowing that during this first attempt, she was able to hit the near post with a first-time shot following great work from Smith on the right wing. 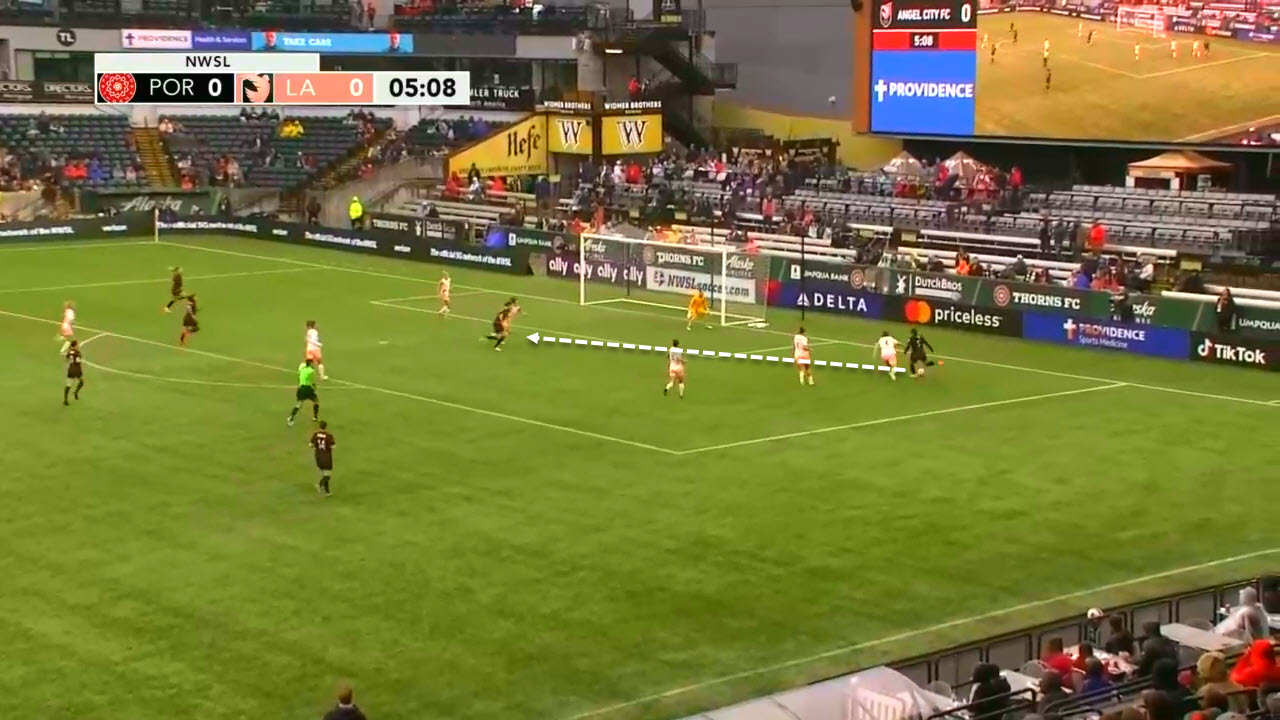 Portland Thorns’ choice of using the 3-5-2 since the start of the NWSL season and following the NWSL Challenge Cup was a little bit unexpected but it proved efficient as it suited the players’ characteristics and allowed the team to have more balance in midfield and defence. It should be said that this 3-5-2 can actually be used and considered as an attacking formation and not the contrary as head coaches nowadays use it to exploit the wings in a more direct way while securing defence and having a solid midfield. Moreover, to ensure that this formation works well with the team, a lot of work is needed in order to create chemistry between the two used strikers and find useful patterns and combinations between them.

Judging by this match, it appears that Rhian Wilkinson and her staff worked well on the 3-5-2 and used it at the adequate time and they are now collecting the fruits of their work. Nevertheless, they will have to keep improving their performances as some player movements will need continuous improvements especially when out of possession. Portland Thorns were quick enough to reach Angel City’s final third in this match as they relied on both wingers Kuikka and Beckie to opt for early crosses to Sinclair and Smith or use through passes in their directions. And what helped them in executing these crosses and passes without the problems in the numerical superiority the team had in this area as they attacked with at least six players, obliging Angel City’s back-four to retreat while their midfielders would find problems in identifying who to mark due to this midfield numerical superiority. 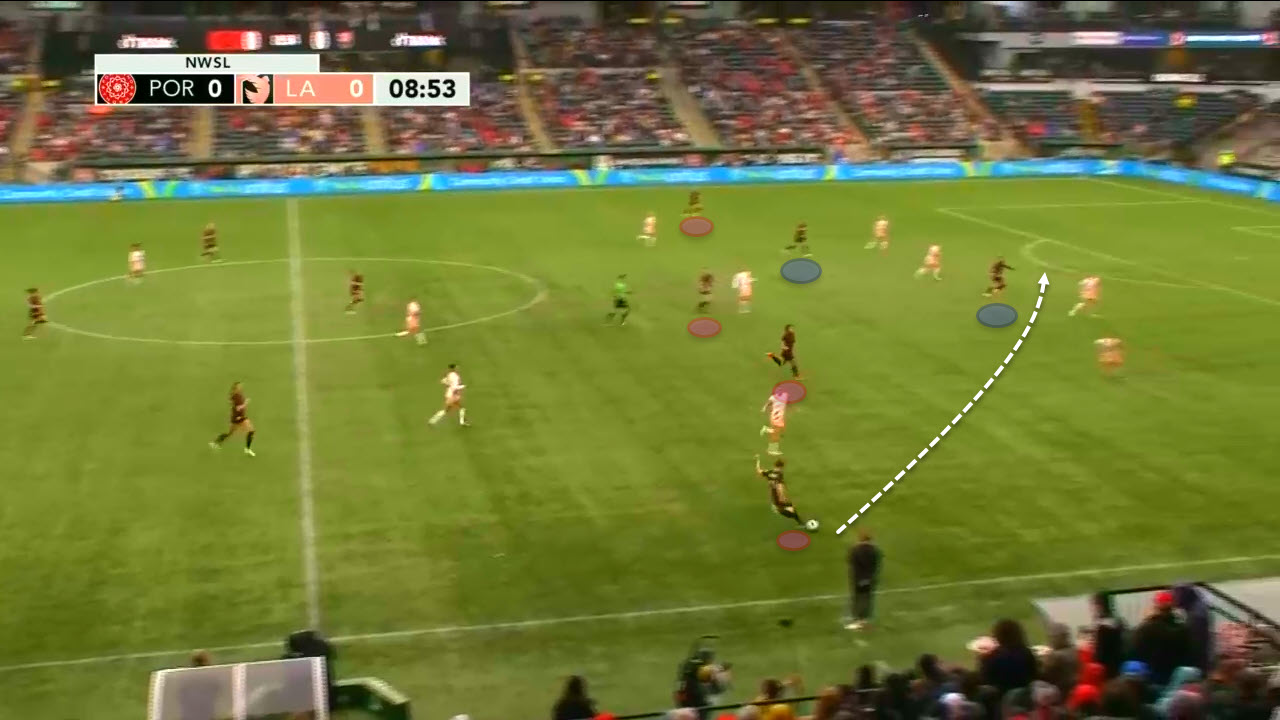 Portland Thorns were quite dangerous in this match as they shot 17 times and were able to get 9 shots on target as opposed to 2 out 13 for Angel City. This resumes the difference between the two teams in terms of chances’ concretisation and finishing. Being able to shoot nine times on target meant that Portland Thorns were not disturbed a lot in the final third and that their players’ finishing was on point. In fact, the team’s first goal was scored by the centre-back Hubly after she exploited a great cross from Smith’s corner-kick and deviated the ball successfully towards the far post.

But what counts for Hubly even more than the quality of the header in itself is her ability to confuse her marker at the start of the action by pretending to run towards the goal when the ball was crossed before stopping suddenly and retreating with a few steps to meet the ball at the right place, and that’s how she didn’t leave enough time for her marker to react or disturb her when executing the header. 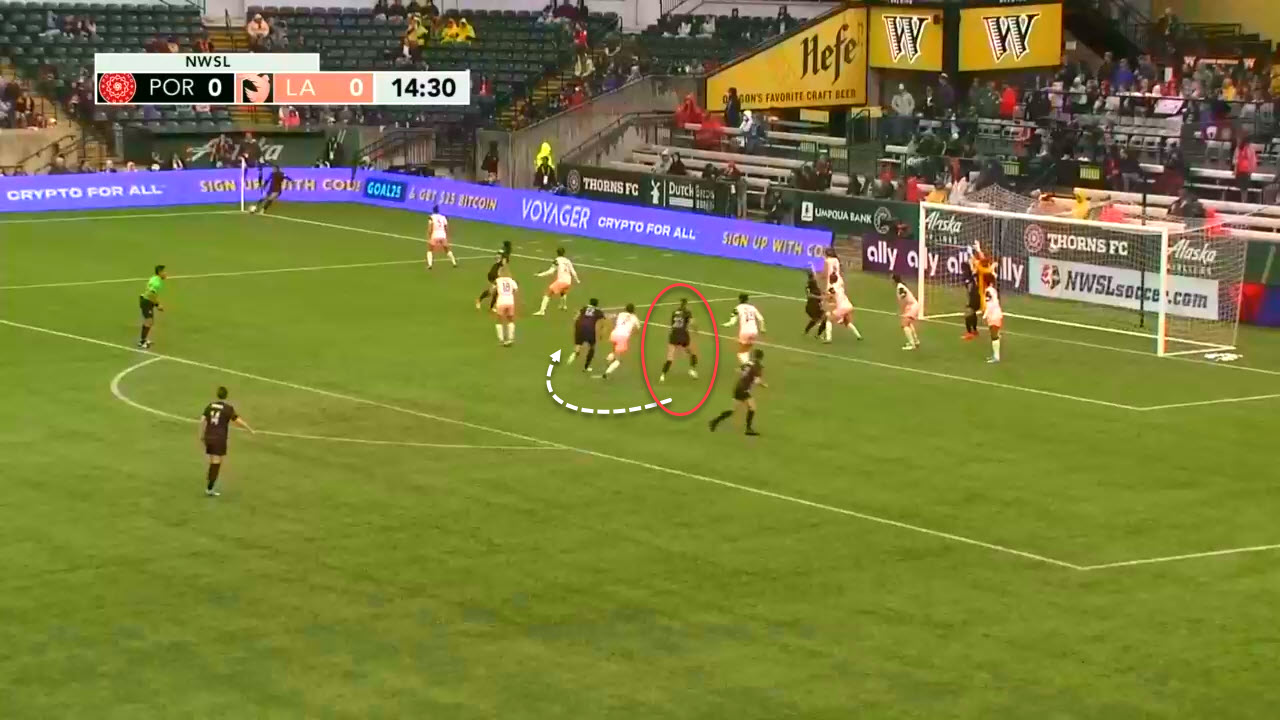 The second Portland Thorns’ goal was born out of an interception in Angel City’s own half when Le Bihan didn’t expect to receive a pass from Riley and lost her balance when controlling the ball, knowing that she was surrounded by three Portland Thorns’ players. This pressing helped Portland Thorns in intercepting the ball quickly before Le Bihan recovers from her wrong movement and then Sugita advanced with the ball, and gave it to Sinclair who shot towards the net with a first-time left-foot shot that ended in a goal. 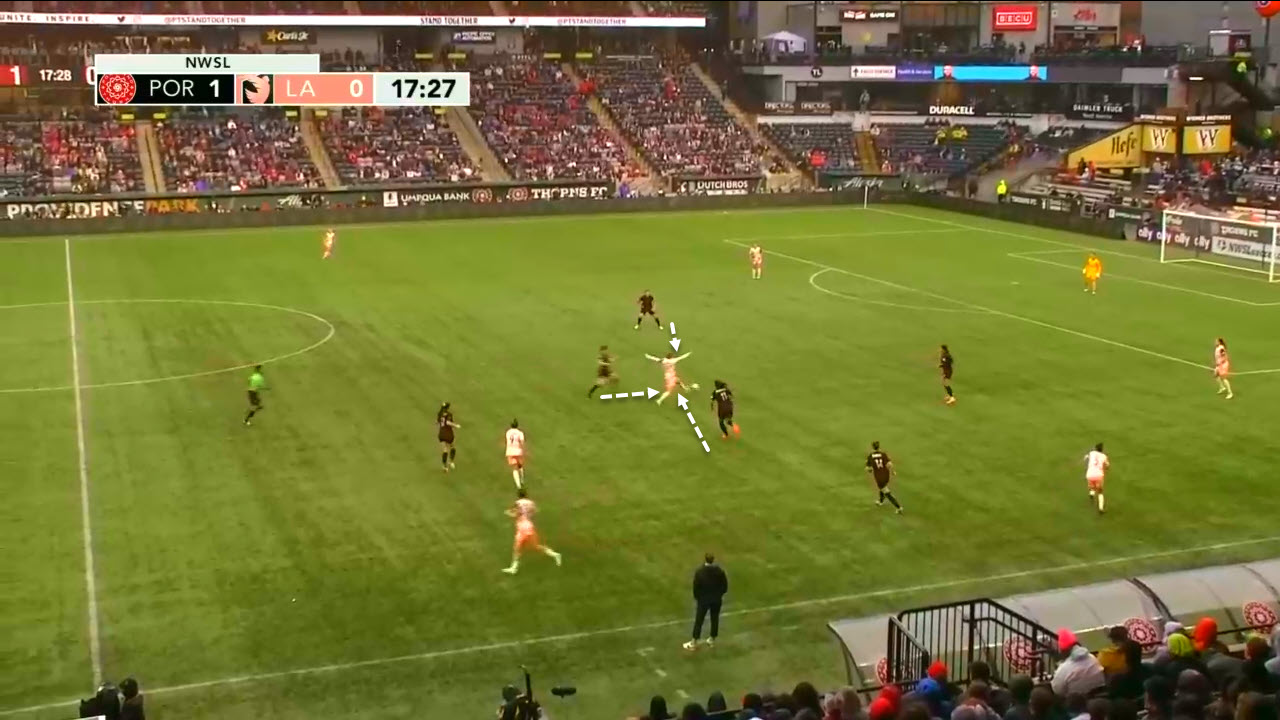 A few minutes later, Sinclair leaned towards the right-wing like Smith did previously, providing a through pass towards the box but Sugita left it on purpose to Smith and the latter was not able to touch the ball due to the disturbance of her marker. Therefore, Beckie was at the receiving end of this pass and she scored it, which shows the importance of playing with wing-backs who often join the attacks and position themselves inside the box at times as well.

Moreover, the advancements of Sugita towards the box were also fundamental in this match as she allowed more freedom and less marking for Sinclair and Smith in addition to representing a valid passing option (Beckie’s goal was then disallowed due to a Smith foul on her marker). 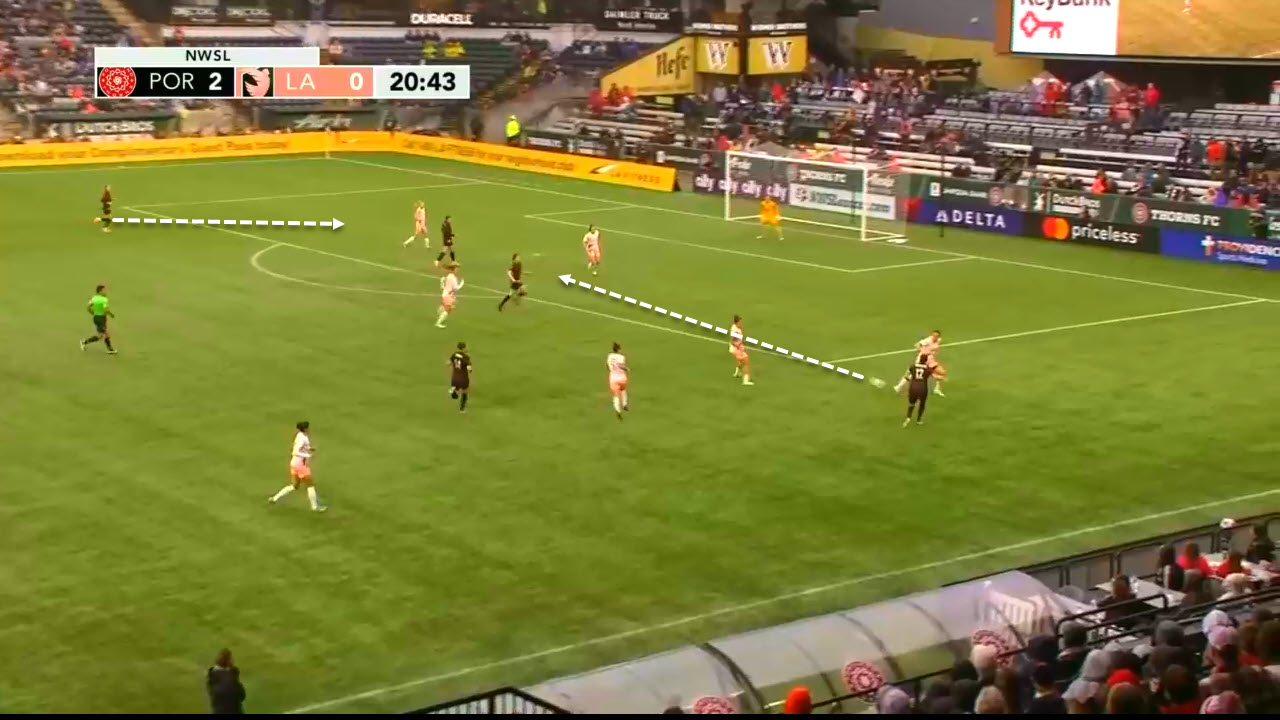 Sinclair was able to add Portland Thorns’ third goal of the match following great penetration and a cross from Kuikka which Sinclair wasn’t able to catch. However, Sinclair got up quickly after she slipped and as soon as she saw Beckie collecting the ball. Beckie’s accurate cross was well received by Sinclair who scored an excellent header, finishing Angel City’s comeback hopes after the team missed a few other big opportunities. 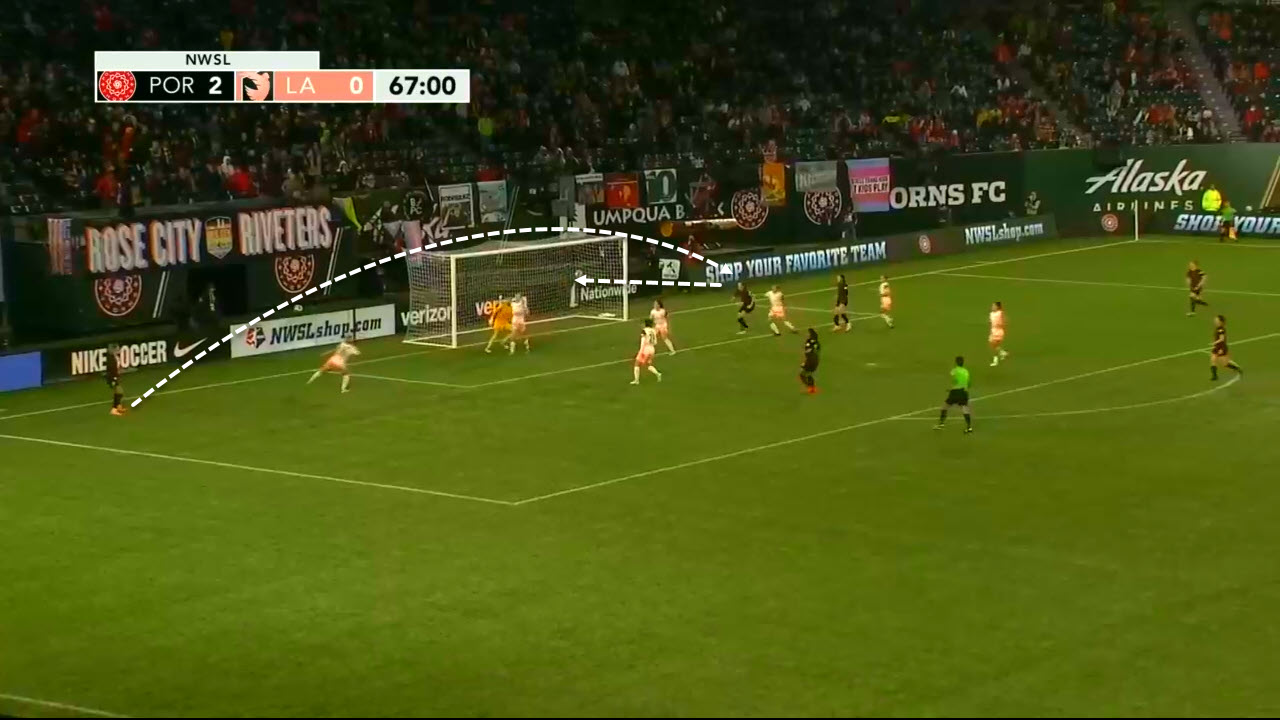 Angel City played better games during the start of this season and they found a lot of problems when dealing with Portland Thorns’ organised and compact 3-5-2. But most of all, they were almost absent from an attacking perspective, which is not acceptable. Shooting only twice on goal during the whole match is worrying for a team with good attacking players like Angel City. Players like McCaskill, Press, Endo and Charley were unable to create some real threat to Portland Thorns’ defence throughout the match despite having more possession 59,28% against 40,72.

And perhaps Charley’s goalscoring chance that occurred at the 25th minute resumes Angel City’s performance. She received an excellent cross from Endo and was supported by Press, but when the goalkeeper got closer to her, she added a touch to the ball in order to get away from the goalkeeper, but her touch was too heavy and she also slipped before controlling the ball. Charley could have attempted to chip the ball over the goalkeeper instead of making things complicated for herself. Also, she had the possibility to pass to Press who was waiting for a pass and was in a situation that allows her to shoot freely while having the time to do so. 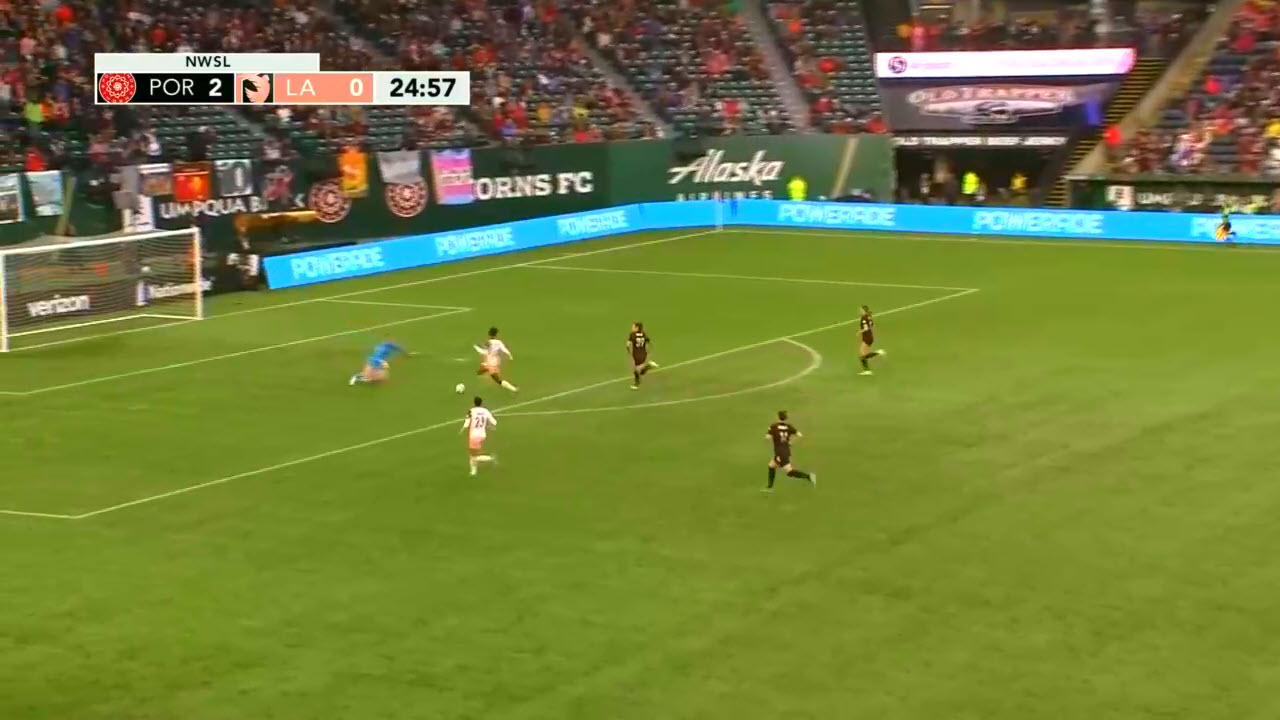 And from a defensive perspective, the team attempted to stop Portland Thorns’ dominance but they were out of ideas as Portland Thorns always looked superior in numbers inside the final third. Angel City were not good enough in terms of aerial duels as they conceded two goals with headers and they were also not capable of stopping the Sinclair-Smith attacking duo. Smith dribbled past the Angel City defenders with ease on a few occasions and Angel City looked clueless during these episodes. Therefore, the team needs to consider fixing these issues as they will have to be more prepared for teams playing with such formations and with powerful strikers.

Portland Thorns deserved this win after putting on an excellent performance, especially from an attacking perspective. The Sinclair-Smith attacking duo worked very well and the team succeeded in creating numerous goalscoring opportunities. Yet, they will have to work more on finishing as they missed a lot of chances. This will be fundamental in their next games especially in cases when they will need one goal to win.

Angel City will need to make some revisions regarding their defensive organisation as they looked unprepared for Portland Thorns’ attack in this game. They will also have to improve their attacking performance and aim at creating more goalscoring chances per match in order to compete and have a chance against the rest of the NWSL sides.