This World Cup play-off final was arguably the biggest game in Wales’ history. The chance to qualify for the tournament in Qatar would end a drought that had lasted since 1958.

Both teams arrived at the game lacking match rhythm.

Most of the Welsh players had not seen much first-team football this season. Gareth Bale played only 290 minutes of football for Real Madrid, Aaron Ramsey started three league games for Rangers, Wayne Hennessey racked up a total of seven league matches since the end of 2018 and Joe Rodon was the fifth or sixth choice centre-back at Tottenham Hotspur.

As for Ukraine, half the team have not played competitive club football since before February for obvious reasons.

Ukraine’s last World Cup appearance was in 2006 when they reached the quarter-final stages. Their 3-1 victory in the play-off semi-finals against Scotland last week was impressive, with Manchester City left-back Oleksandr Zinchenko, deployed in midfield for his country, being a key cog in the Ukrainian engine. The side were desperate to give their nation something to cheer about, a sense of hope, after the unfortunate events of recent months.

Bale’s free-kick, deflecting off captain Andriy Yarmolenko into his own net, proved to be the difference on the night in Cardiff and secured a place in the tournament for Wales.

Despite Ukraine’s dominance, Hennessey came up with some heroic goalkeeping to keep his team in front.

This tactical analysis will look at the huge game between Wales and Ukraine at the weekend. The analysis will break down some of the key tactics on display during Sunday’s historic result.

For Wales, Rob Page had key decisions to make. He opted to start with striker Kieffer Moore and change the team’s usual shape from 5-3-2 to 5-2-3. Wayne Hennessey was selected in goal ahead of Danny Ward.

Ukraine were unchanged from the side that beat Scotland in the semi-finals playing in a 4-3-3. Everton’s Mykolenko retained his sport at left-back while Zinchenko played in the middle of the park. Yarmolenko, looking for a new club in the summer, was the team’s main goal threat. 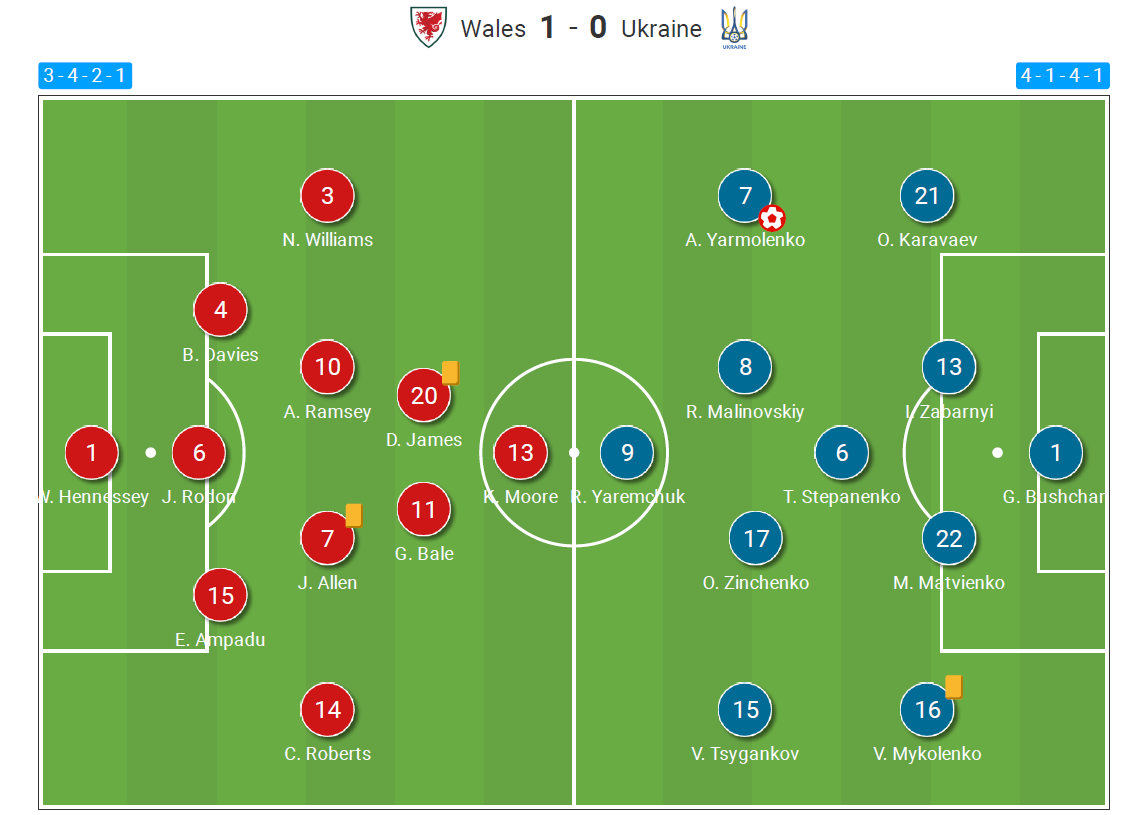 Ukraine established the ascendency in the early stages and enjoyed the lion’s share of possession. They lined up in a very fluid 4-3-3. Wales were happy to stay in their shape and their tactic depended on frustrating the opposition and hitting them on the counter-attack. When Ukraine pinned the hosts deep in their half, Bale would stay narrow to block the passing lane from the central defenders into Zinchenko.

The latter would regularly occupy a false left-back position to get hold of the ball, enabling Mykolenko to push higher and Tsygankov to drift inside and link up with Yaremchuk. Bale did not press wide and supported Ramsey and Allen in the middle of the park when needed since they were getting outnumbered; James was the one who jumped out on a more regular basis. Moore was tasked with closing down balls towards the holding midfielder, Stepanenko, with Wales defending in a 5-2-3 block. 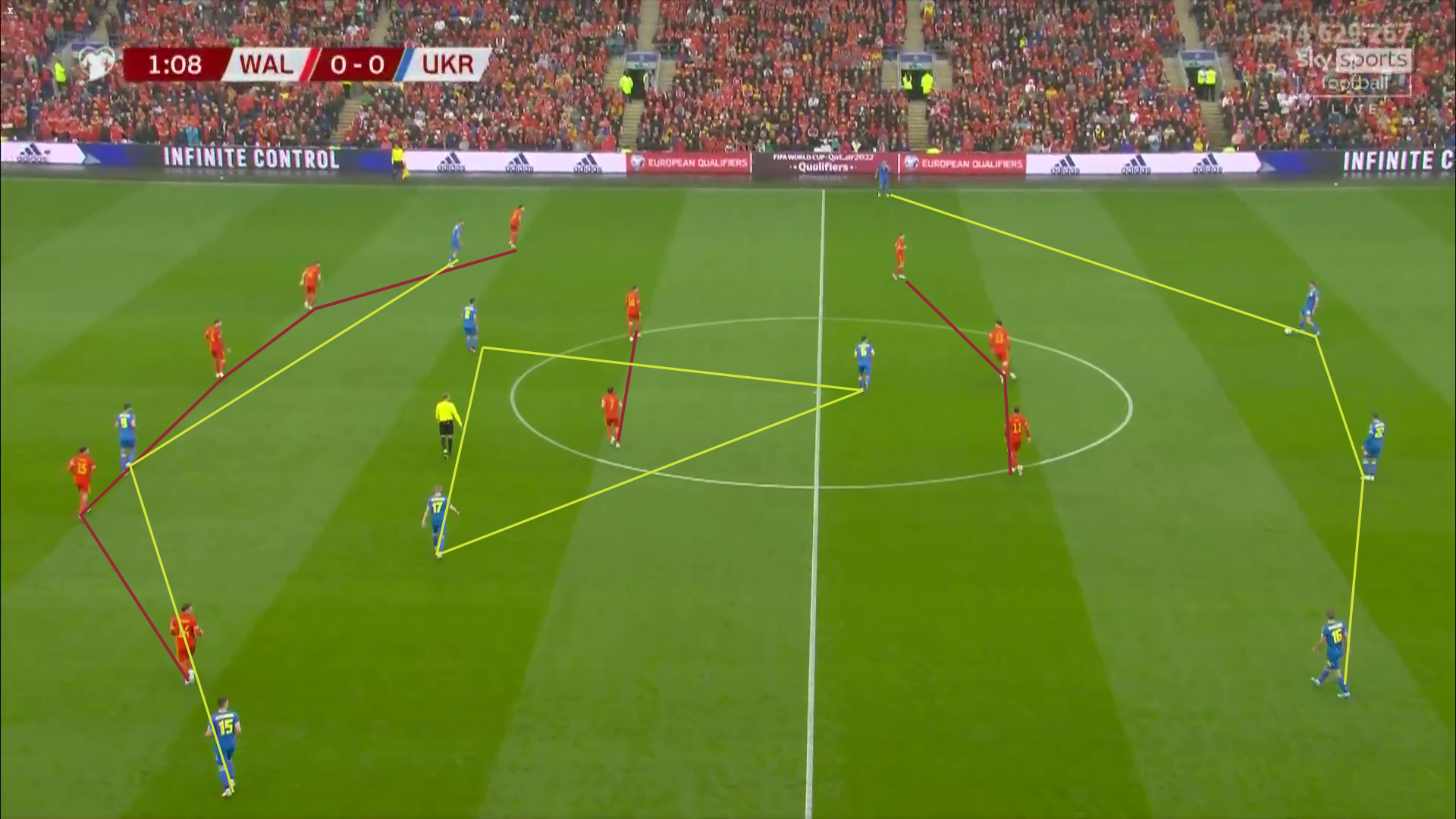 Up until the first goal, Wales chose to press Ukraine from goal-kicks on most occasions, sometimes forcing one of the centre-backs to play it long towards his striker. However, it seemed like Ukraine were trying to create separation in Wales’ midfield by attracting them towards the ball, enabling more space for the front three around the back line.

Here, Zinchenko dropped deeper forming a double pivot and is closely tracked down by Allen. Mykolenko stayed deep at left-back forcing Roberts to push into the Ukrainian half. 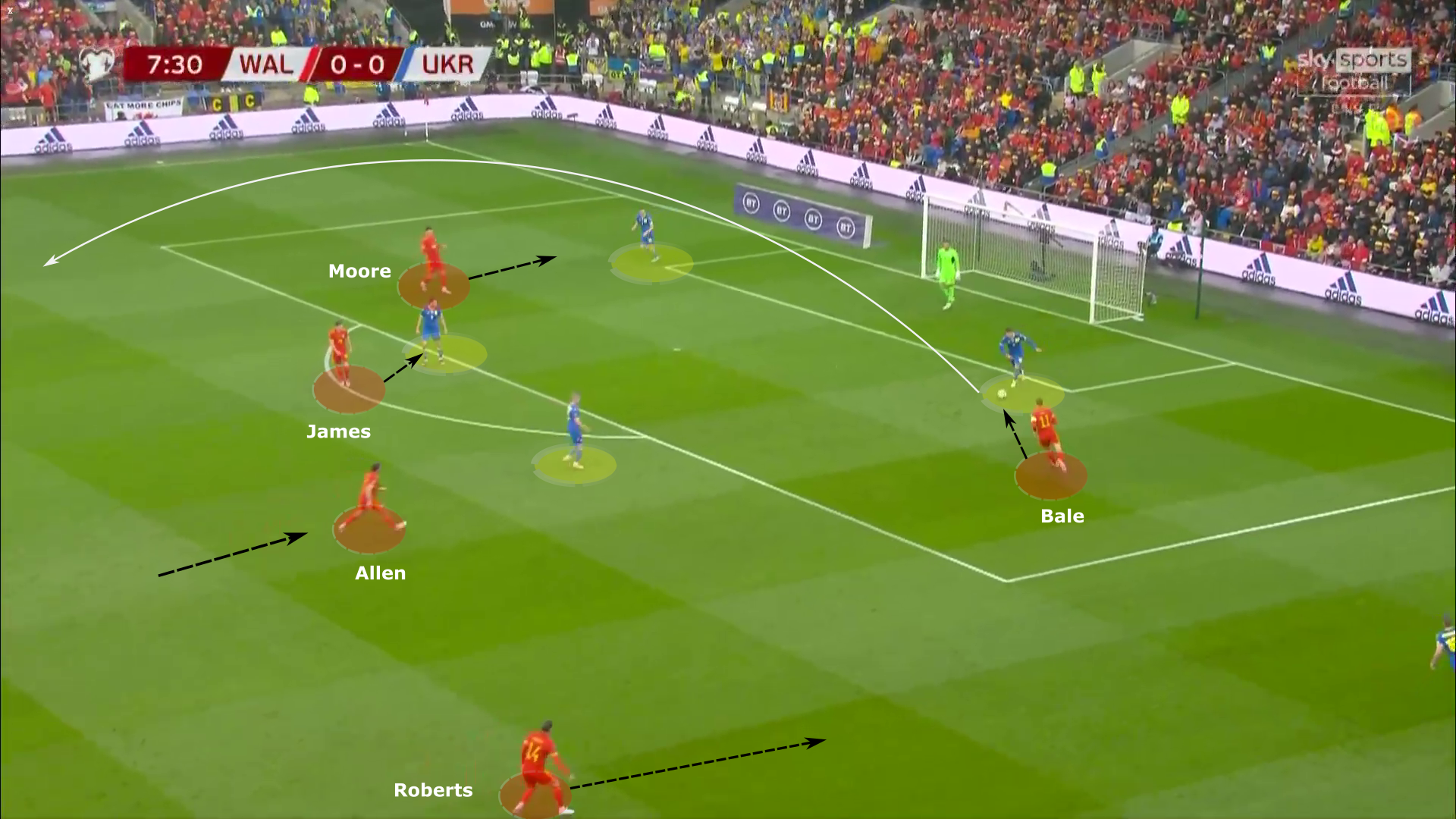 During Wales’ build-up phase, Ukraine defended in a 4-1-4-1 shape. When Ampadu has the ball here, Tsygankov pressed him from out-to-in while Zinchenko moved to his left to cut the pass into Bale between the lines. This freed up Allen to receive the ball in midfield to try and find Williams and Roberts on the wings. 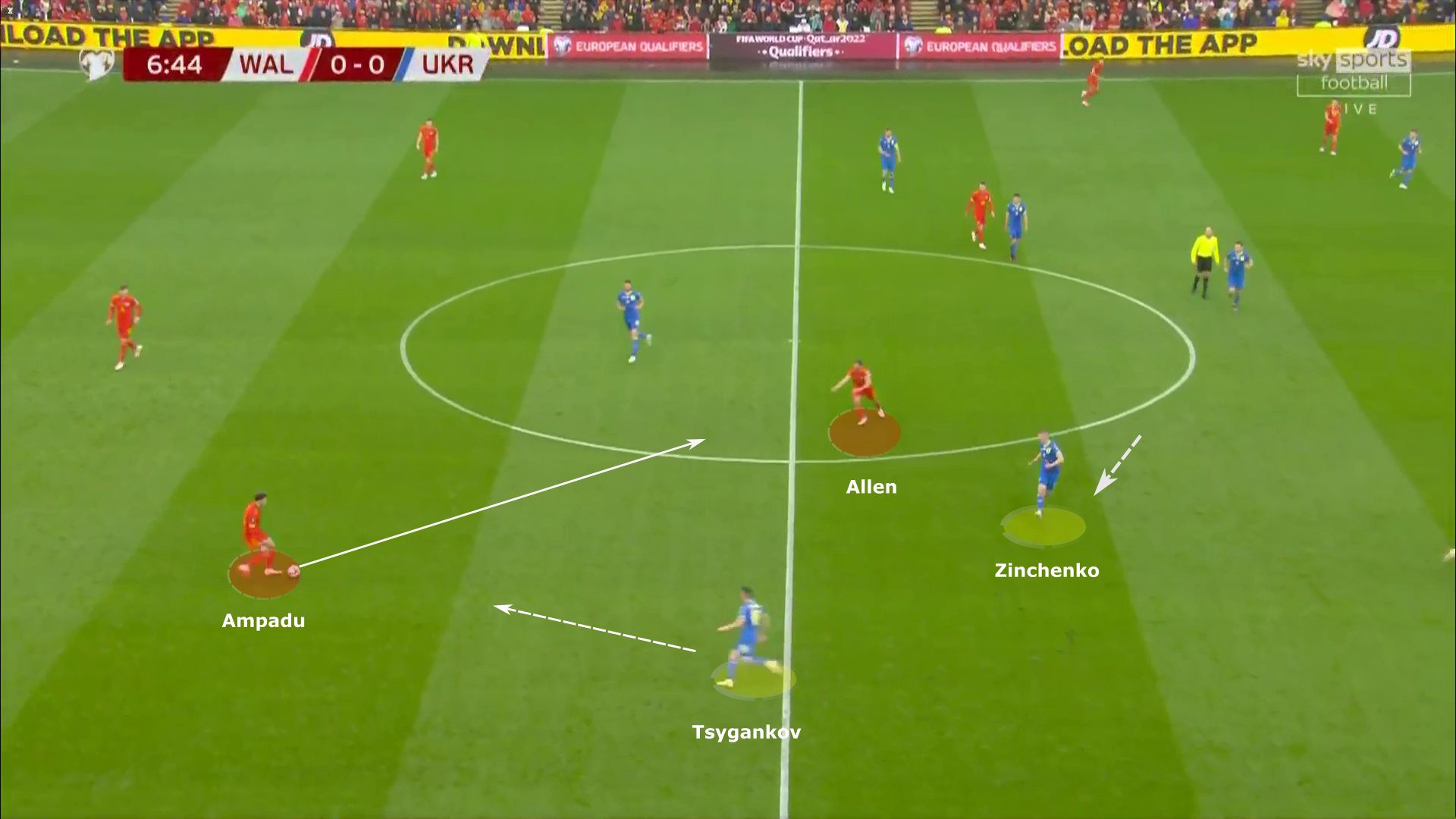 Wales, trying to get a foothold in the game, were being closed down man-to-man when playing out from the back. The first sign of danger emerged when Zinchenko was able to block Rodon’s pass which nearly resulted in a goal. After that, Hennessey went long for most of the night, especially after his team were hanging on to a 1-0 lead. 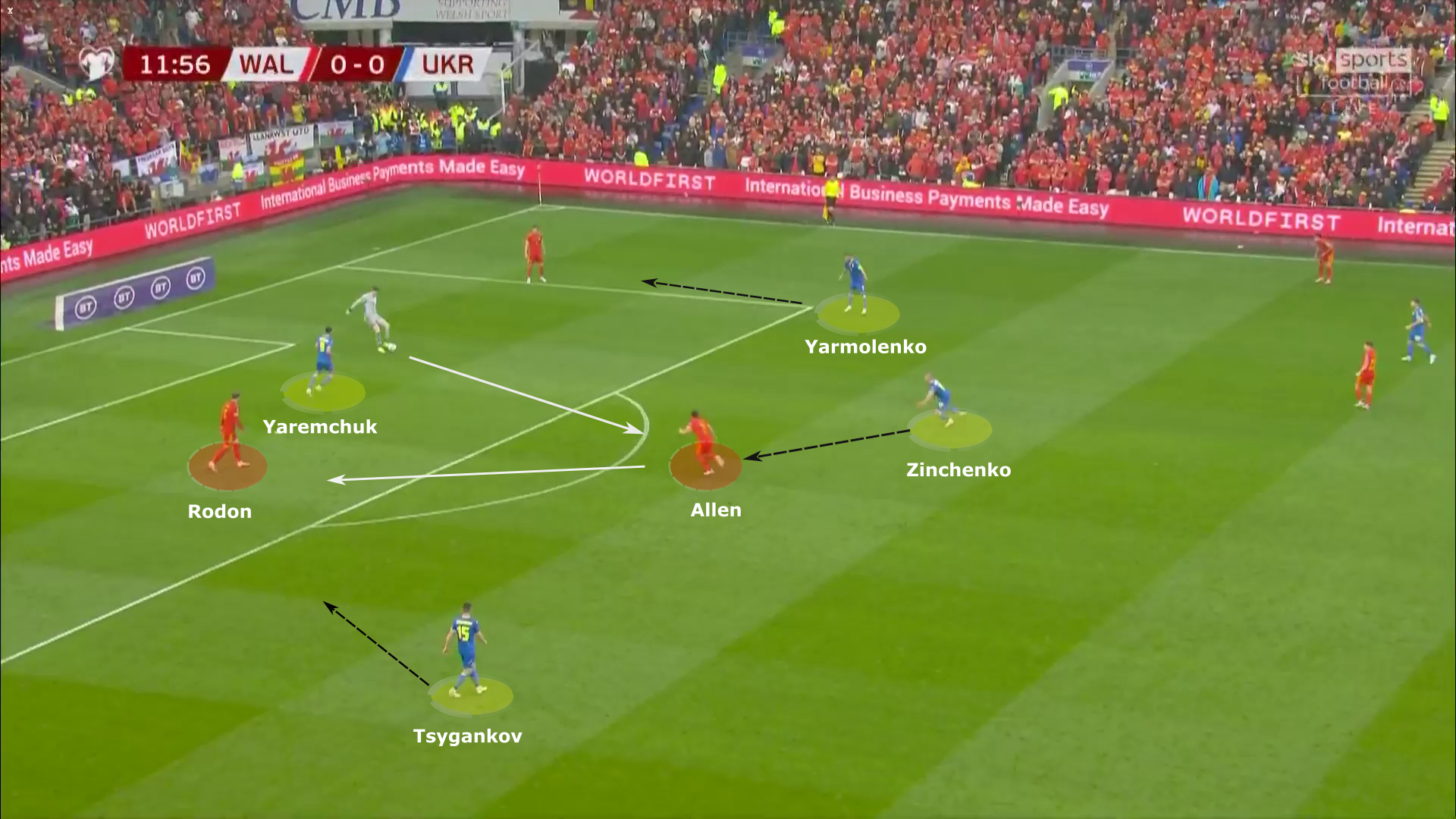 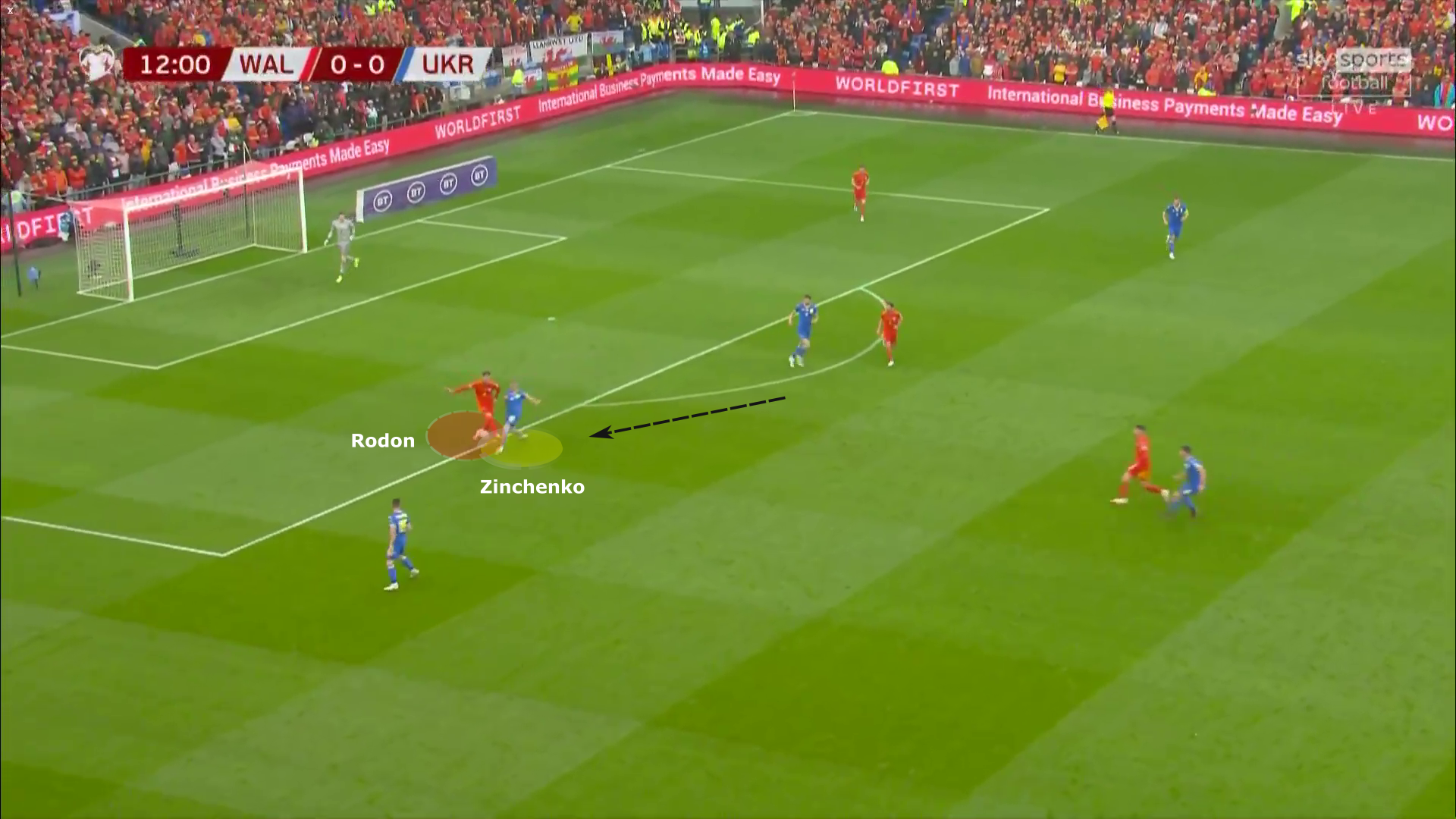 As soon as Ukraine lost the ball high up the pitch, they looked to counter-press aggressively and win it back in dangerous areas. Here, Wales regain possession and Williams plays it into Allen. Zinchenko is directly all over him and manages to intercept the ball, he feeds it to Mykolenko on the left side who provides a fizzing cross into the box, leading to an important chance. 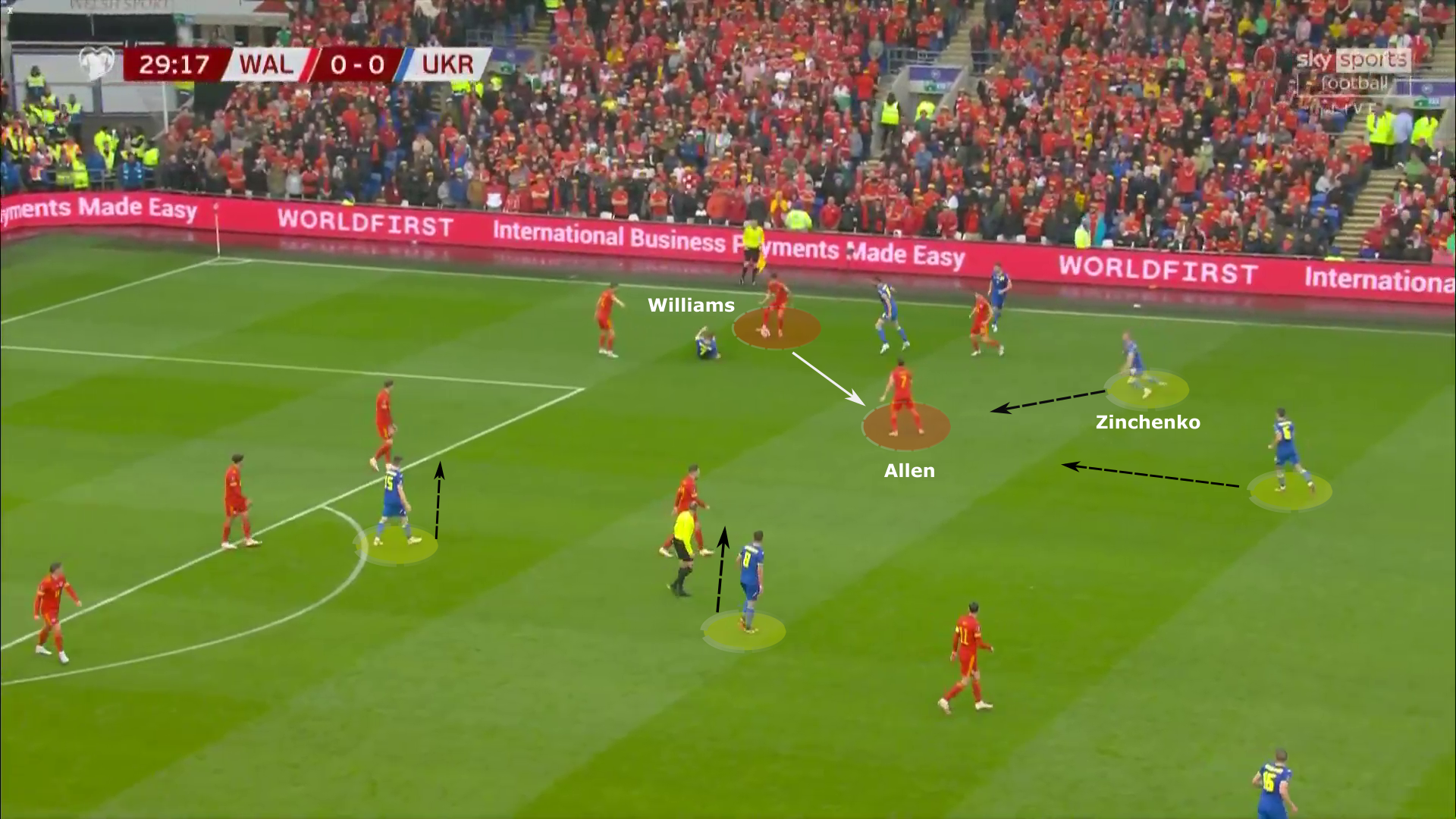 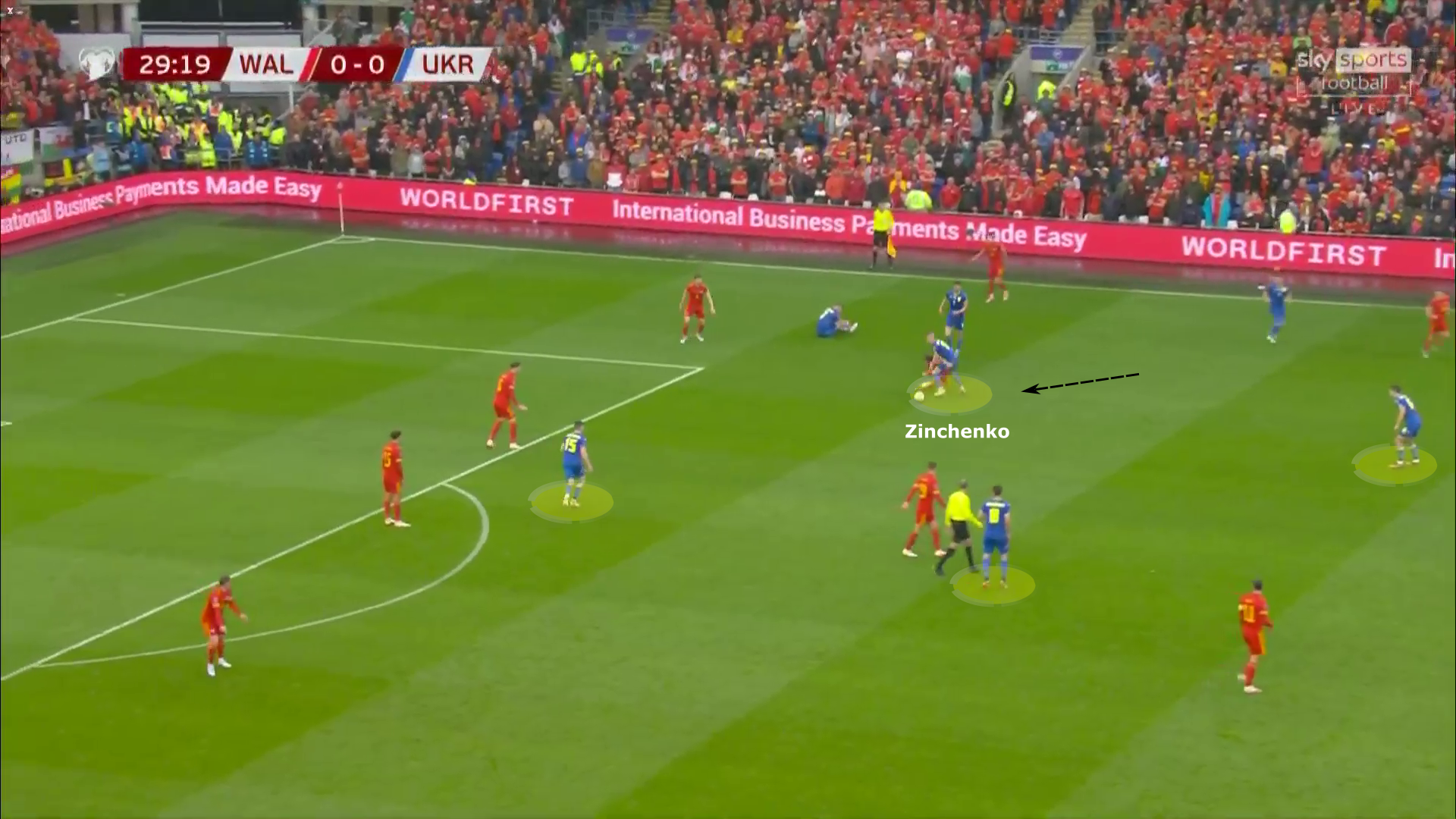 Another example was in the 39th minute, when Karavaev’s cross, intended for Yarmolenko, fell into Allen’s feet. Yarmolenko then instantly sprinted out and nicked the ball from behind the former Liverpool man’s feet. He was knocked down inside the box as a result, but VAR deemed it not to be a penalty, which proved to be a huge and controversial decision looking back. 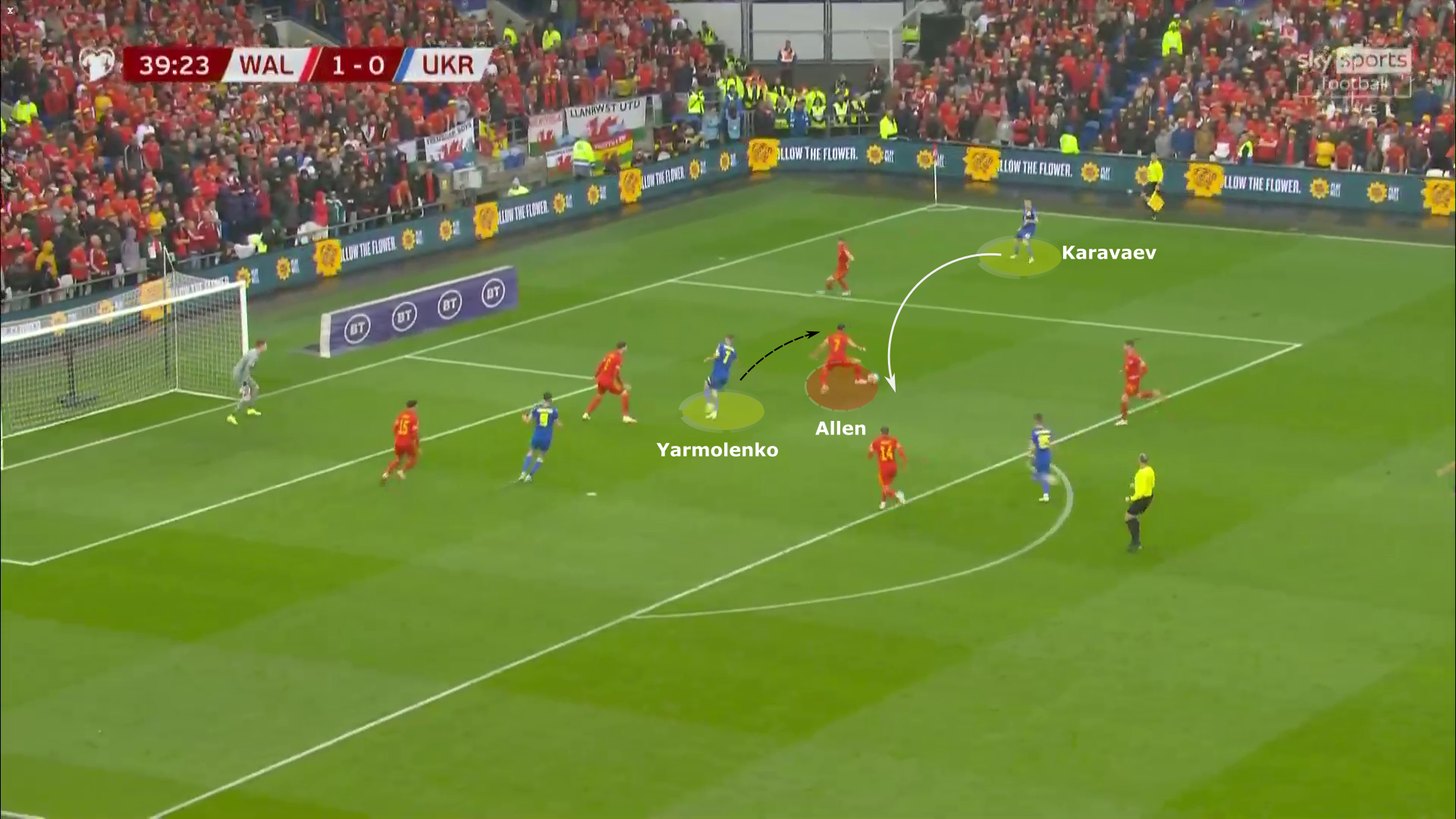 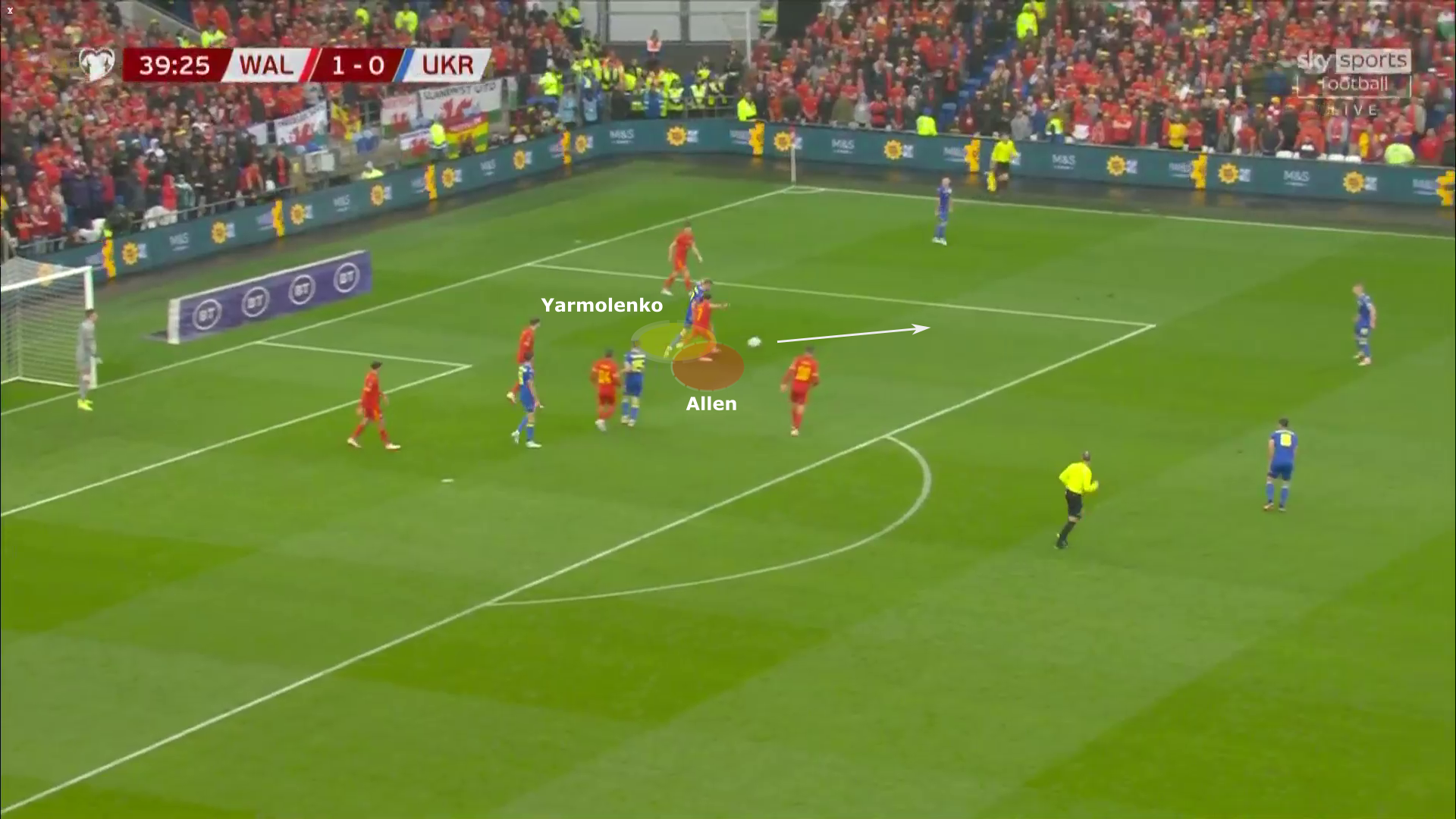 The visitors began to gain supremacy and dominate proceedings. They ended the game with 66% possession to Wales’ 34%, out-passing the hosts 484 to 188. Ukraine created numerous chances in behind the Welsh back five courtesy of their smart movements and rotations.

A pattern emerged for Ukraine when they had the ball deep on the left flank. The ball-sided central midfielder would make a run towards the left channel and stretch the Welsh defence, becoming a direct option in the half-space. This exploited Ampadu’s desire to push out freeing up Zinchenko to receive Mykolenko’s cross, but his touch let him down. 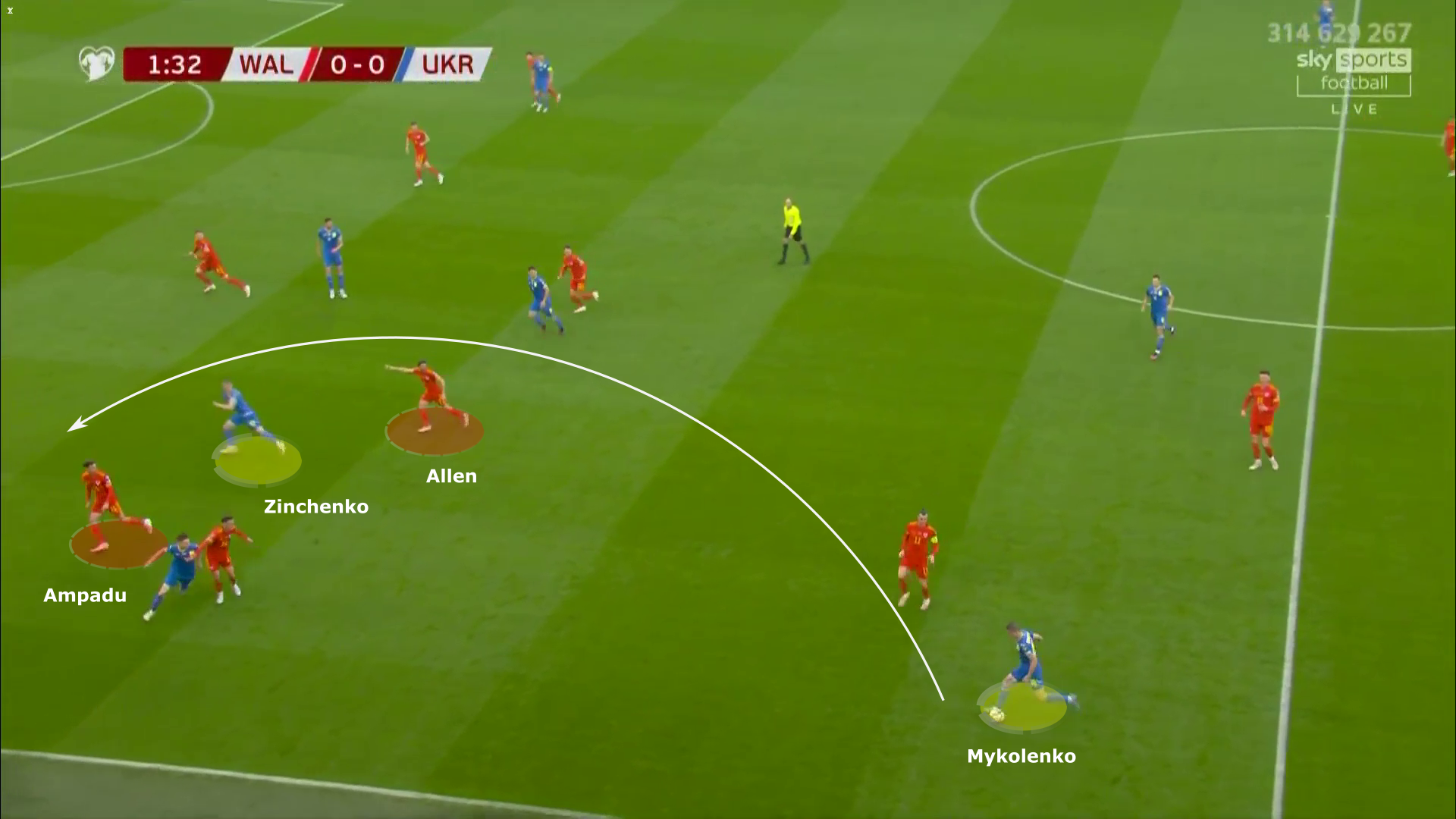 Speaking of Zinchenko, he was playing a free role, a Kevin De Bruyne role if you like – popping up in different areas all over the pitch to get on the ball and cause damage as can be highlighted in his heatmap below. We can even notice his involvement in the false left-back position.

He was emerging in the #10 position between Ramsey and Allen. Malinovskiy manages to find him intelligently. Notice that the two players in this action are the Ukrainian central midfielders, both not in their natural positions. 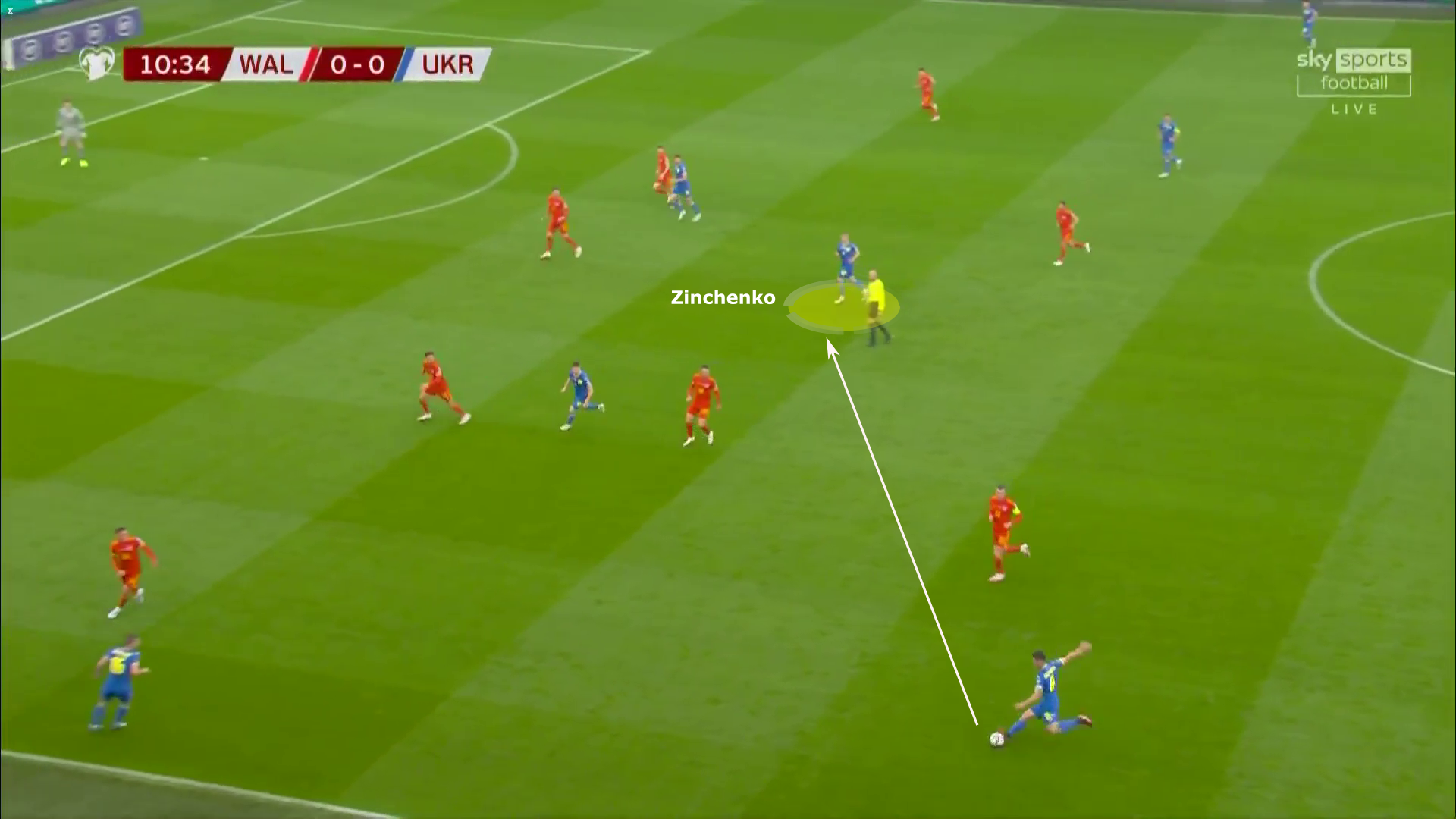 Zinchenko created 2 chances, took 3 shots, provided 9 passes into the final third and made 7 progressive runs. He was instrumental and his pass map further emphasizes his impact in all areas of the pitch.

Another fundamental aspect of Ukraine’s chance creation was the movements of Yaremchuk and Tsygankov. On three occasions in the first half, Ukraine managed to get in behind the Dragons’ back five. When the ball was with either full-back, Yaremchuk tended to drop inside to receive the ball with his back to the goal while Tsygankov moved inside and made runs beyond his striker.

This is demonstrated below when Mykolenko has the ball on the left. He feeds Yaremchuk who then nicks it through to Tsgyankov who was already on his bike, leaving Ampadu trailing. 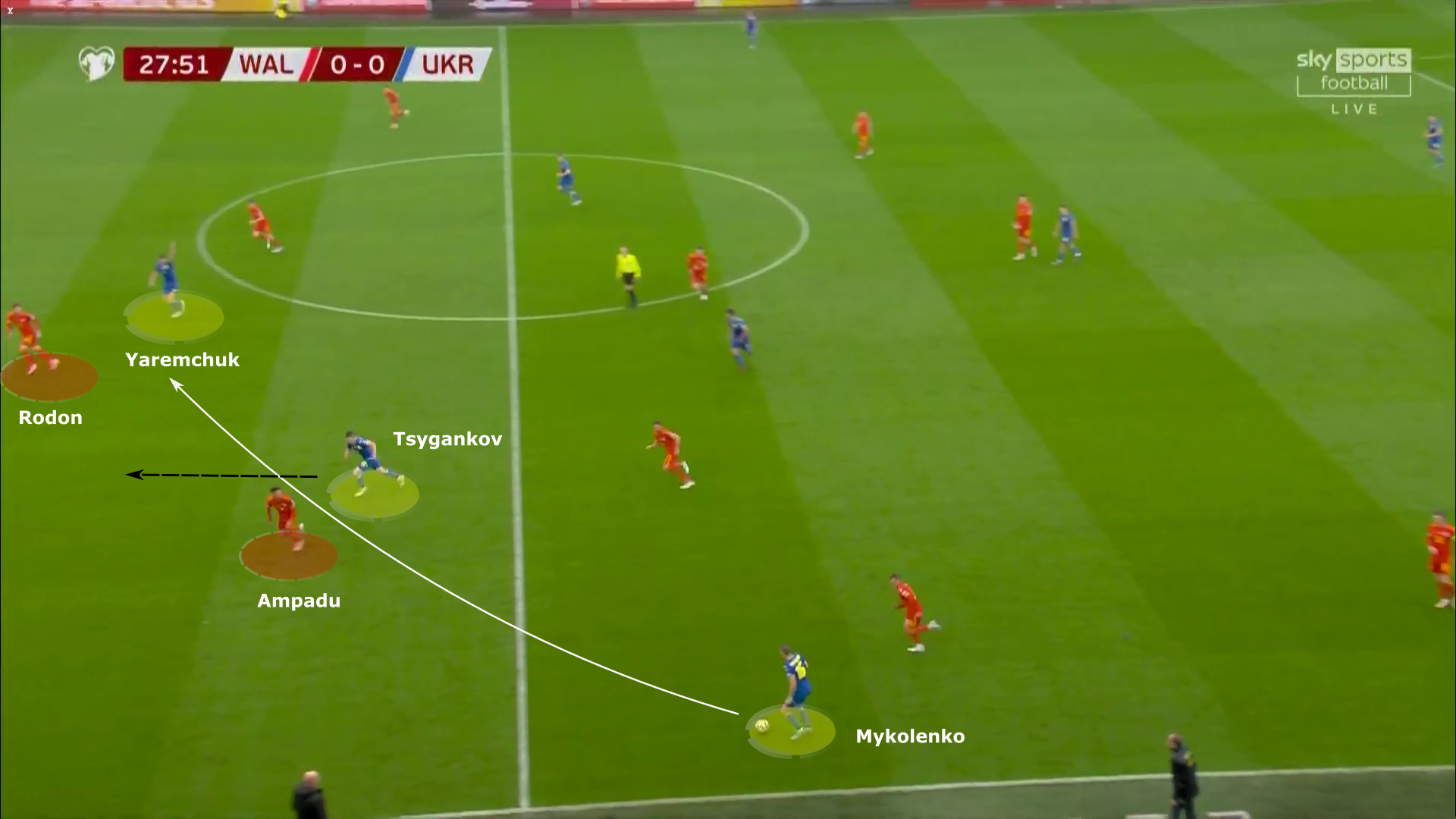 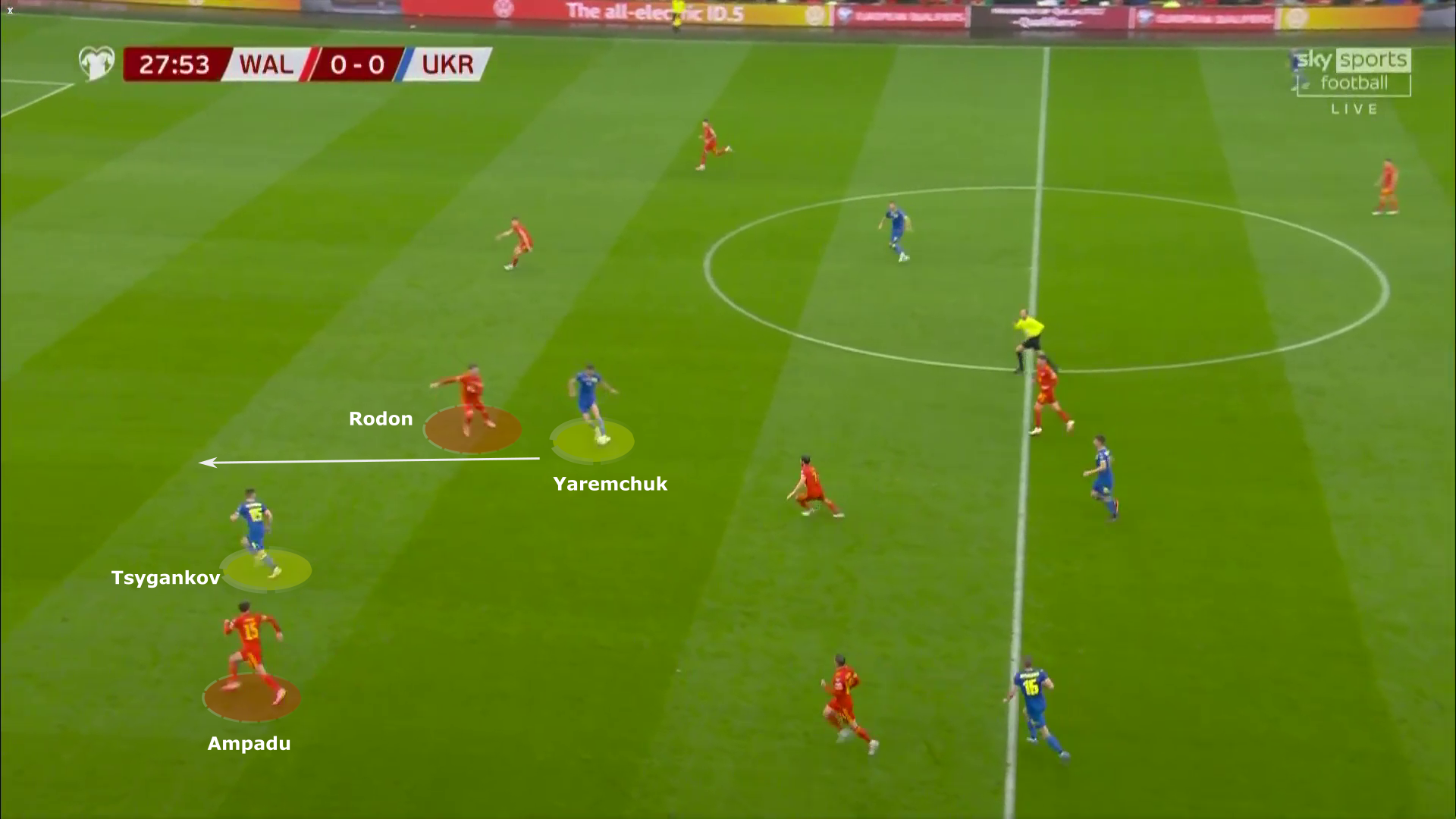 The same pattern re-occurred from the right-hand side when Karavaev found his number nine with an accurate cross and the exact Yaremchuk-Tsygankov combination was on show again. 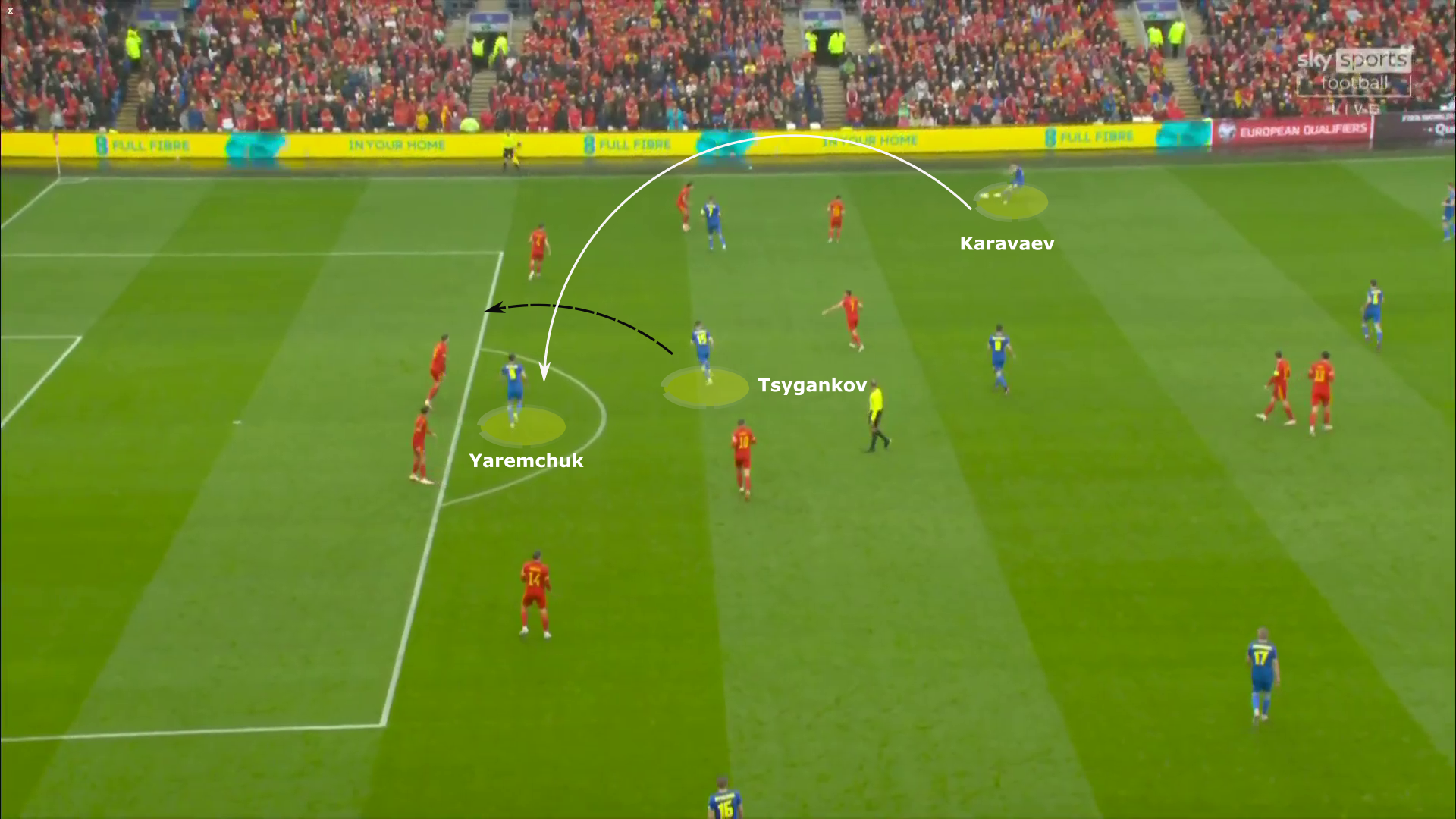 Yarmolenko began to rotate regularly with Yaremchuk, which added a different dimension to the Ukrainian attack. Yarmolenko acted as more of a false nine, fending off the shoulders of Allen and Ramsey, while Yaremchuk made forward runs to be an option for long passes in the space behind Davies.

Hennessey was forced into action in the 17th minute when Yaremchuk was found with a direct pass played into space behind the Welsh back line. Yarmolenko moved into the halfspace, attracting Ben Davies forward and separating him from Rodon. Ampadu did not step out in time and kept the striker onside. 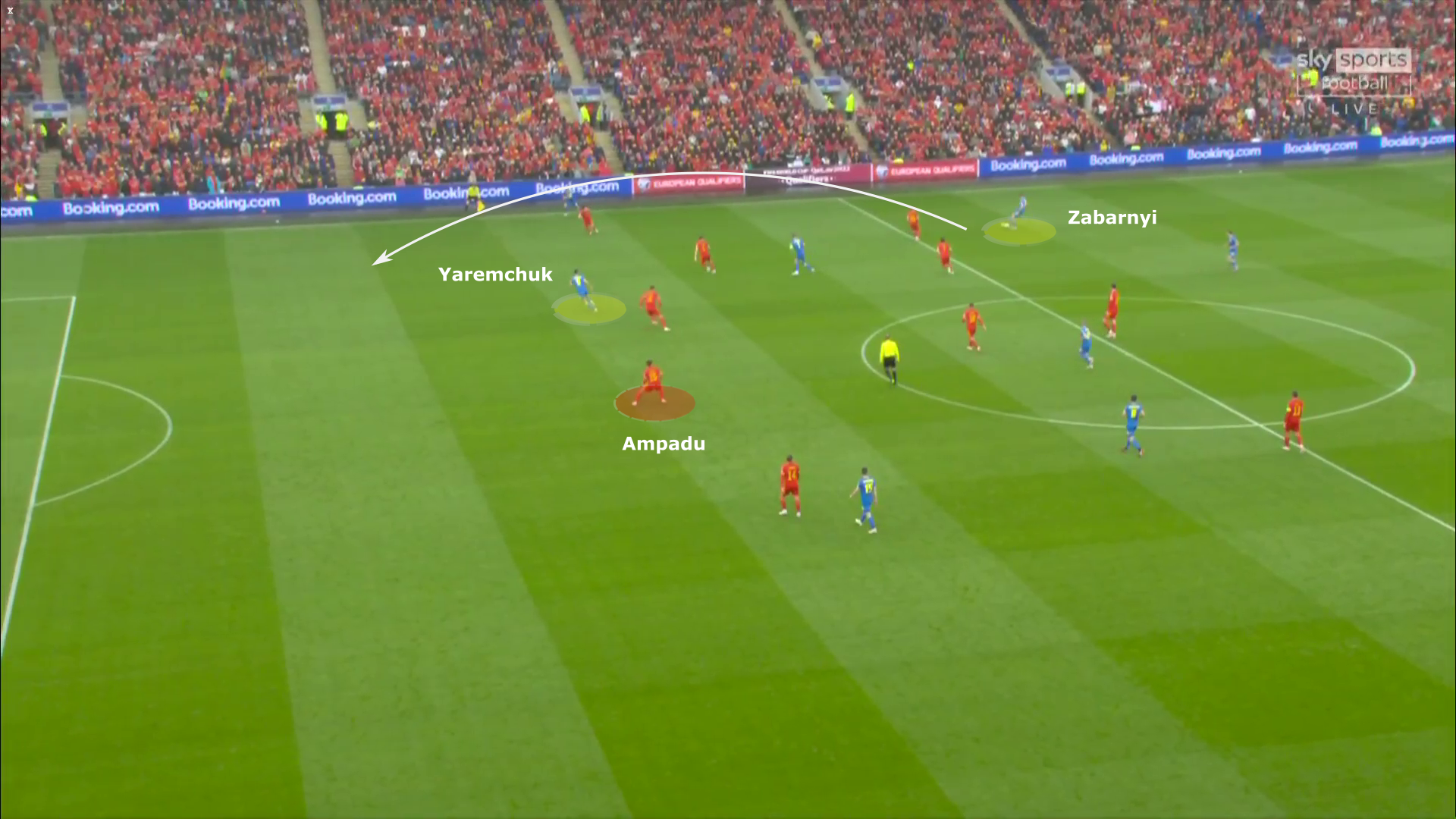 Was it not for Ukraine’s abysmal conversion in front of goal, taking 22 shots to Wales’ 9, and Hennessey’s heroics in goal, making 9 saves, the result would probably have been different. Ukraine had a much higher xG, 2.4 to 0.74, but failed to do what matters most; score.

The ‘Shot Map’ below highlights all the spots from where Ukraine attempted their shots. 12 of those were efforts from outside the box.

Wales on the break

Despite Ukraine’s chances, Wales held firm and showed resilience to emerge victorious. They created two big chances late in the second half on the break, with substitute Brennan Johnson hitting the post within minutes of his introduction before Bale fired a delicious cross straight at goalkeeper Bushchan.

The fans kept rallying behind the team, and it was Neco Williams’ energy and drive that embodied the determination of the whole nation to progress at all costs. The 21-year-old was bombing down the left flank from the wing-back position. He made as high as 9 recoveries, 5 clearances, 2 interceptions to spur his team on and regain momentum. His aggressive high-energy performance had shades of the Liverpool DNA.

As Karavaev got higher up the pitch more often, the space behind him became exposed and Williams managed to take advantage of that early in the second half. Here, he snatches the ball back and slices in between Yarmolenko and Karavaev. 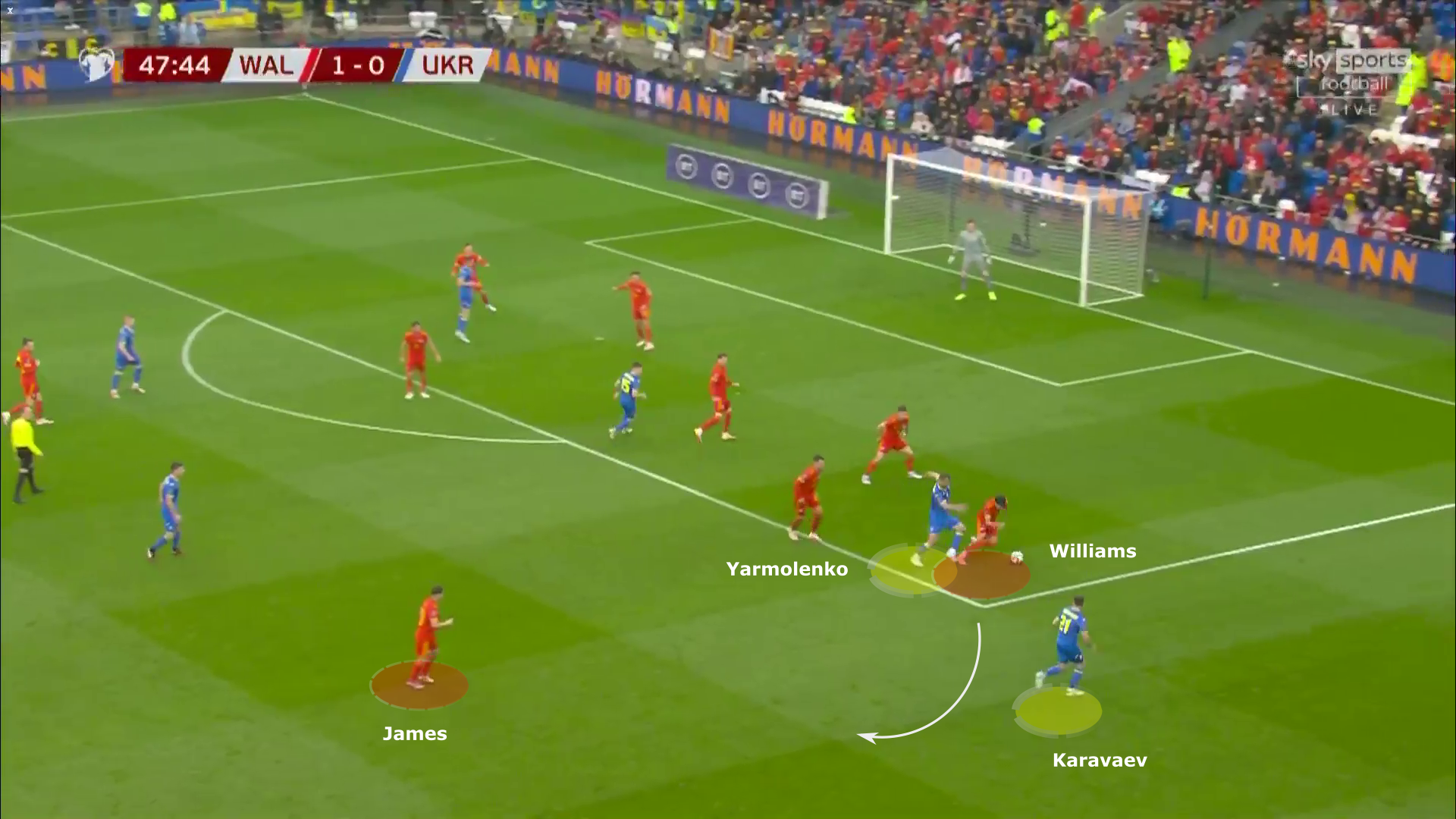 He surges forward and feeds it to James with the outside of his boot. The pacey James sprints the full length of the pitch until the edge of the Ukrainian box and feeds Moore, who had begun to pop up on the left since the end of the first half to become an option in the space left by Karavaev in transitions. 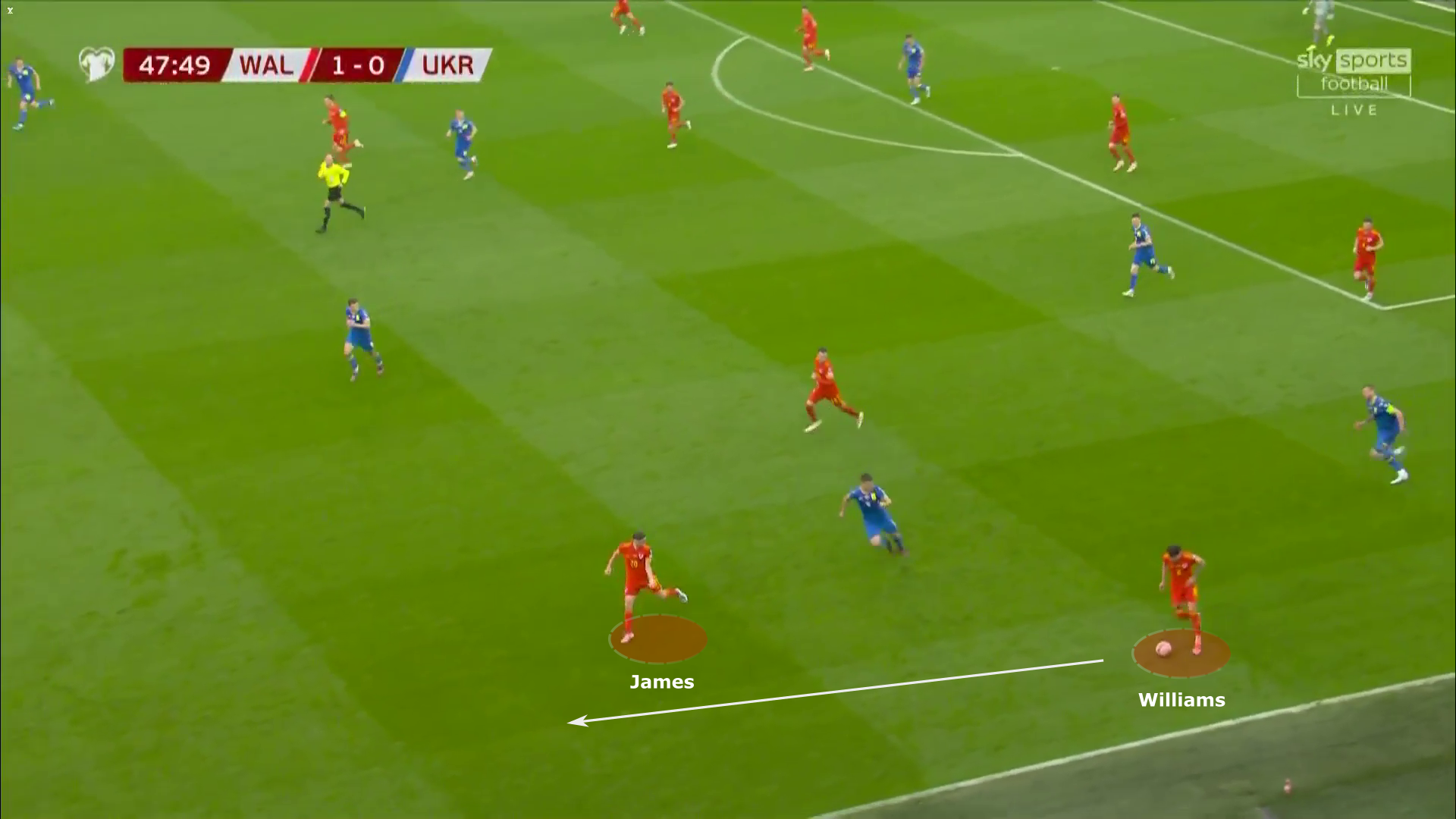 Moore brilliantly knocks it across to Ramsey in a fantastic position, but the former Arsenal and Juventus playmaker badly misses the target. 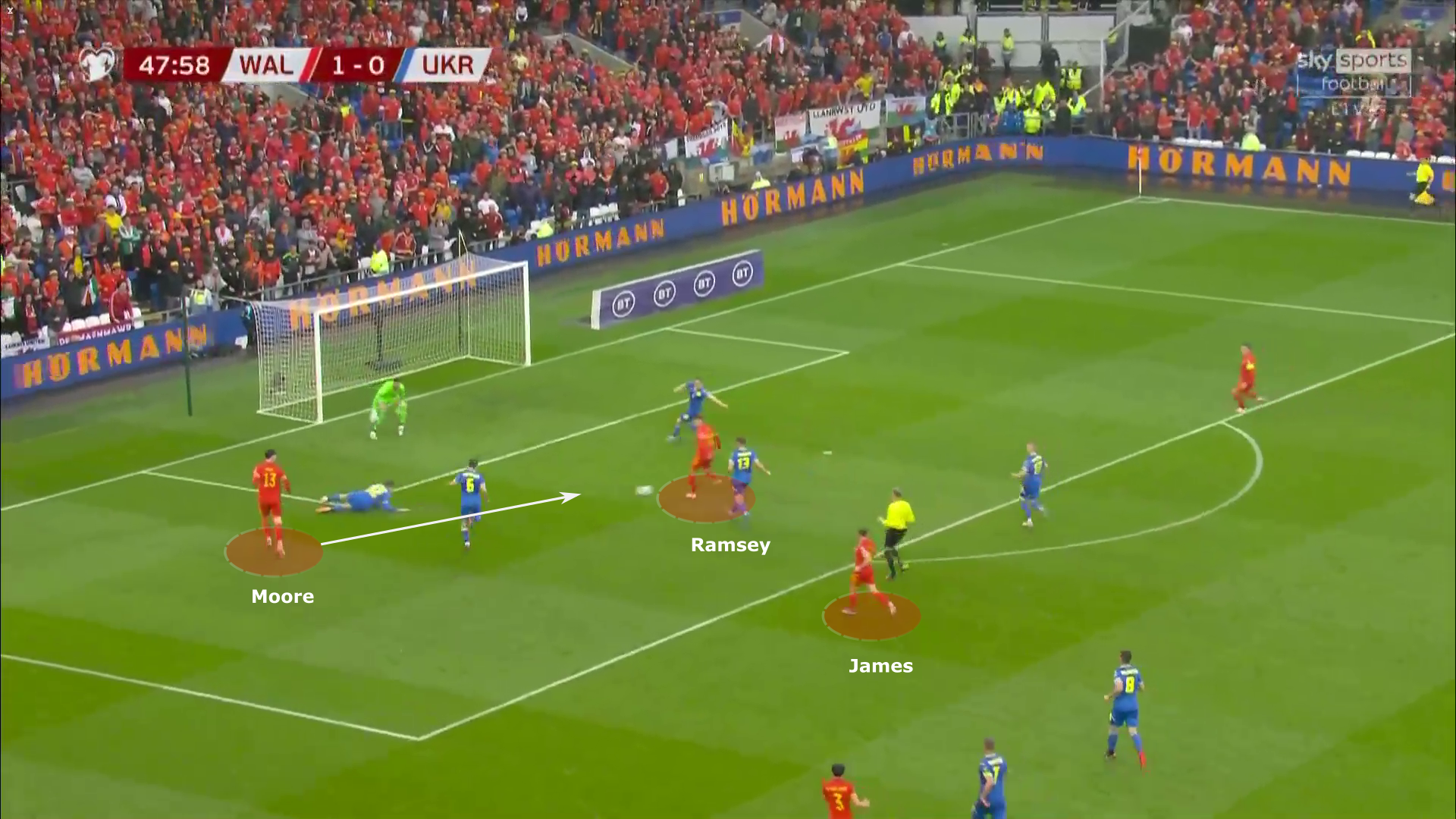 As the game dragged on, Wales sat deeper and deeper in two banks of five and four with Moore the only player left ahead of play. 14 interceptions from Wales were the testimony of their desire to fight for every ball, perfectly encapsulated by Davies, who played a superb game at left centre-back.

“Every challenge they threw at us we dealt with. It’s incredible, a dream come true, as a squad we’ve worked so hard for this,” said Davies post-match. 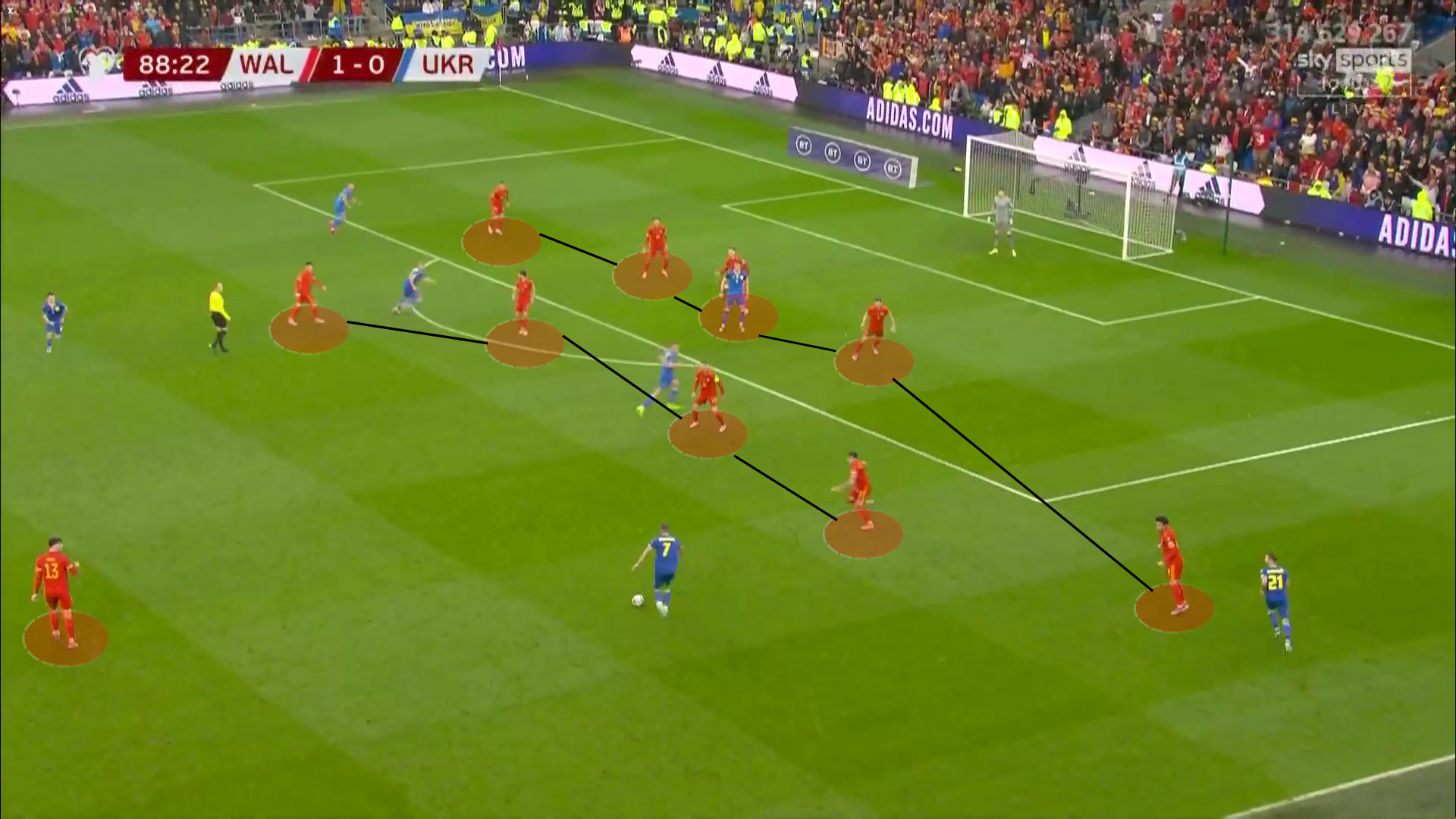 This is also demonstrated with the possession stats, showing how Wales began to drop off after the goal in the 34th minute.

Andriy Yarmolenko’s own goal broke Ukrainian hearts and sent Wales to the 2022 World Cup in Qatar. But the Ukraine team can be proud of their performance and collective effort.

Head coach Oleksandr Petrakov was downbeat after the game and thanked all the players, “I think we did everything we could but I want the people of Ukraine to remember our team, our efforts. I want to say sorry we didn’t score but that is sport, that happens. I am lost for words, I don’t know what to say.”

Rob Page’s side will be part of the 32 teams battling it on the world’s biggest stage for the first time since 1958. They’ll now face England, Iran and the USA in Group B when the tournament kicks off in November.

“It’s the greatest result in history for Welsh football,” Bale said afterwards. “It means everything.” 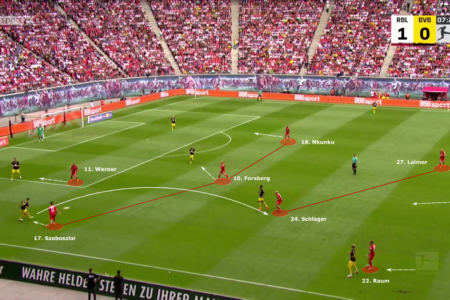 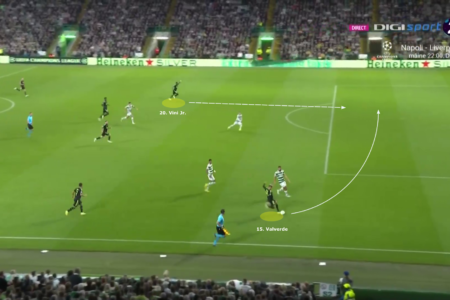 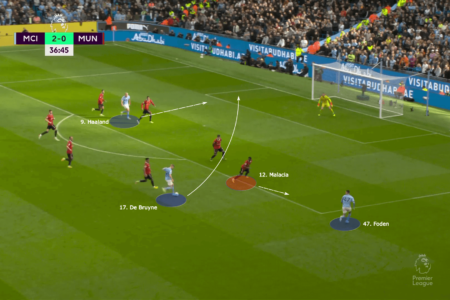 Erling Haaland is nine goals away from last season’s golden boot winning total. There are 30 games left to play. […]