Serie A Women 2021/2022 : How Inter were able to exploit Milan’s tactical mistakes to win in the derby – tactical analysis

Inter Women won their first-ever derby by beating Milan Women 0-3 in a match that witnessed a worrying performance from the Rossonere who are now getting more distant from the second spot. Continuing with such performances would mean that Milan will say goodbye to UEFA Women’s Champions League qualification since there is fierce competition on that spot from Sassuolo, Inter and Roma who are all showing that they are worth participating in the best women’s European competition.

Milan will be playing against top of the Serie A Women standings, Juventus, in a match that will be crucial for determining whether Milan will still be able to fight for the to UEFA Women’s Champions League qualifying spot or not. A loss in that match would make things a lot more complicated for Milan as it will also pave the way for Sassuolo, Inter and Roma to gain advantage over one of their rivals in this regard.

On the other hand, Inter will host Sassuolo in another direct confrontation that would also be decisive in terms of standings. Inter will have a psychological advantage over Sassuolo since they won the derby convincingly while Sassuolo have just lost 0-2 against Juventus during the previous fixture.

In this tactical analysis article, the focus will be mainly on pointing out Milan’s defensive and attacking weaknesses while also shedding some light on Inter’s exploitation of the situation and usage of the adequate tactics to beat their opponent.

Milan Women started the match according to the 3-5-2 formation with Laura Giuliani as a goalkeeper, Guðný Árnadóttir, Laura Agard and Laura Fusetti in defence, Sara Thrige and Valentina Bergamaschi as wingers, Refiloe Jane, Greta Adami and Christy Grimshaw as central midfielders with both Valentina Giacinti and Lindsey Thomas as strikers.

On the other side, Inter Women used the 4-3-3 formation with Francesca Durante in goal, Anja Sønstevold, Kathellen Sousa, Lisa Alborghetti and Beatrice Merlo in defence, Henrietta Csiszár as a defensive midfielder just in front of the defensive line, Ghoutia Karchouni and Marta Pandini as central midfielders while both Gloria Marinelli and Tatiana Bonetti played on the wings to support the team’s striker, Ajara Nchout. 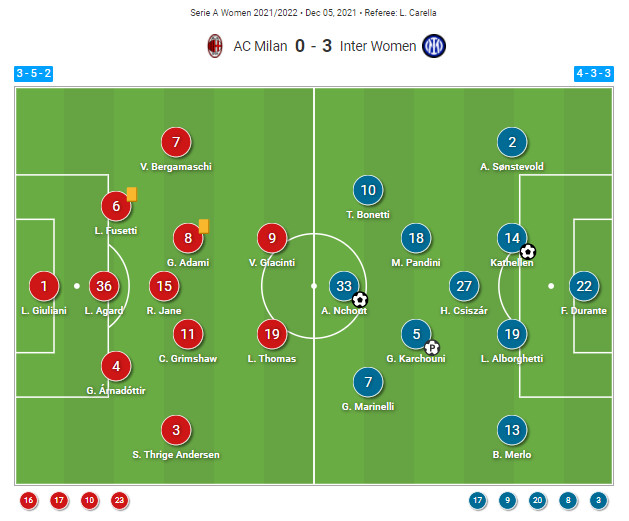 Milan started the match relying mainly on the right-wing and especially the accelerations of Grimshaw who attempted to serve Giacinti and Thomas several times but without success either due to offside positioning or too tight marking from Inter’s defenders. At the same time, the team committed an awful marking mistake that cost the team a first Inter goal following a corner-kick that was well-executed. But what was unacceptable from Milan’s defence was leaving a player alone near the far post while standing in the middle and having four players who are not marking any Inter player. This defensive mistake led to conceding a first goal that made things complicated for Milan especially from a psychological aspect. 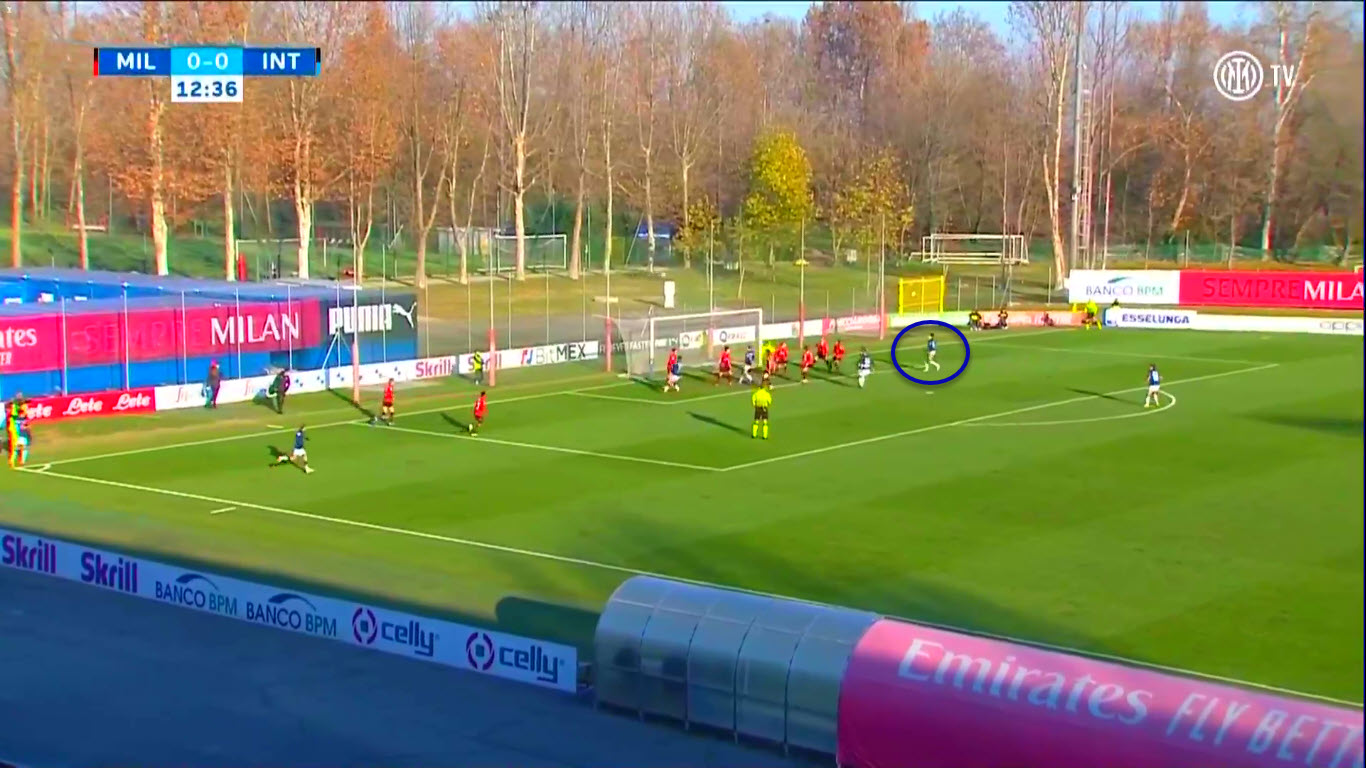 Moreover, the tension between the head coach Maurizio Ganz and some important team players like Giacinti and Verónica Boquete made things more difficult in such situations since viewers can feel that the level of motivation and organisation on the pitch has dropped due to the deterioration of the relation between the head coach and his players. Also, the team’s attacking plans became predictable and the execution of these plans lacked efficiency and concentration especially when reaching the penalty box.

Inter did well to prevent Milan from building up easily from the back since they were aware of Milan’s efficiency when progressing bit by bit. So instead, they preferred pressing high on Milan’s defenders and this approach proved to be successful on this occasion.

Milan won 94 of 233 duels in this match with a 40% rate, a number that reflects Inter’s domination in terms of physical contact ball-winning since they won 129 of these duels. In addition, Milan didn’t rely on smart/key passes in this match and no single smart pass was seen during their performance. This was most probably due to Boquete’s absence since she was the real team playmaker who used to attempt such passes for Giacinti and Thomas. Nevertheless, Ganz should have instructed players like Jane, Grimshaw and Adami to try this type of passes in order to surprise Inter’s defence and give the opportunity for the attacking players to be in suitable shooting situations.

All the danger that Milan created in attack was centred on one idea: trying to pass to Giacinti even if it’s at the wrong timing. And since Inter’s defenders made sure to mark Giacinti tightly, this plan was usually unsuccessful. In the few times in which Giacinti moved accurately and escaped from marking, the passes arrived at the wrong timing and were too predictable for Inter.

You can see in this example how Thomas kept the ball for too long until Inter’s players realised the idea that Thomas had in mind and therefore they surrounded Giacinti after she was in an excellent position where Inter’s defenders were a bit distant from her. The inability of passing the ball at the adequate timing was one of Milan’s attacking problems in this match as well. 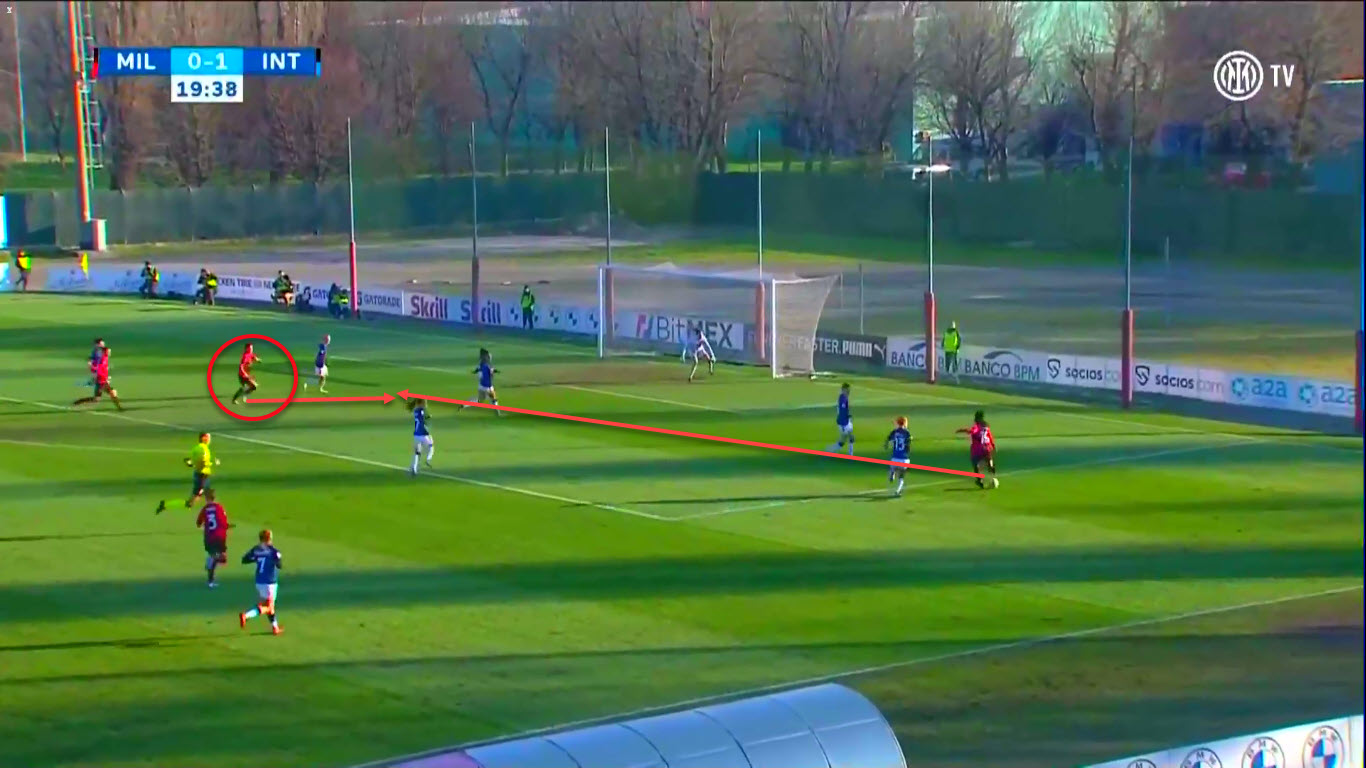 In fact, Milan shot 17 times on goal with just six accurate shots, and this could be one of the few positive things for Milan did in this match. However, their attempts were usually not well-prepared and included many desperate shots from distance. This made Inter have more psychological advantage and stop most of Milan’s attempts including some of Giacinti’s dangerous shots.

Surprised by Durante, Giacinti in this chance didn’t know how to deal with the situation and opted for advancing with the ball to get past Durante but she didn’t calibrate her touch very well to reach the ball. She could’ve dealt with such situations better in order to score a goal or two at least and why not help her team bounce back. 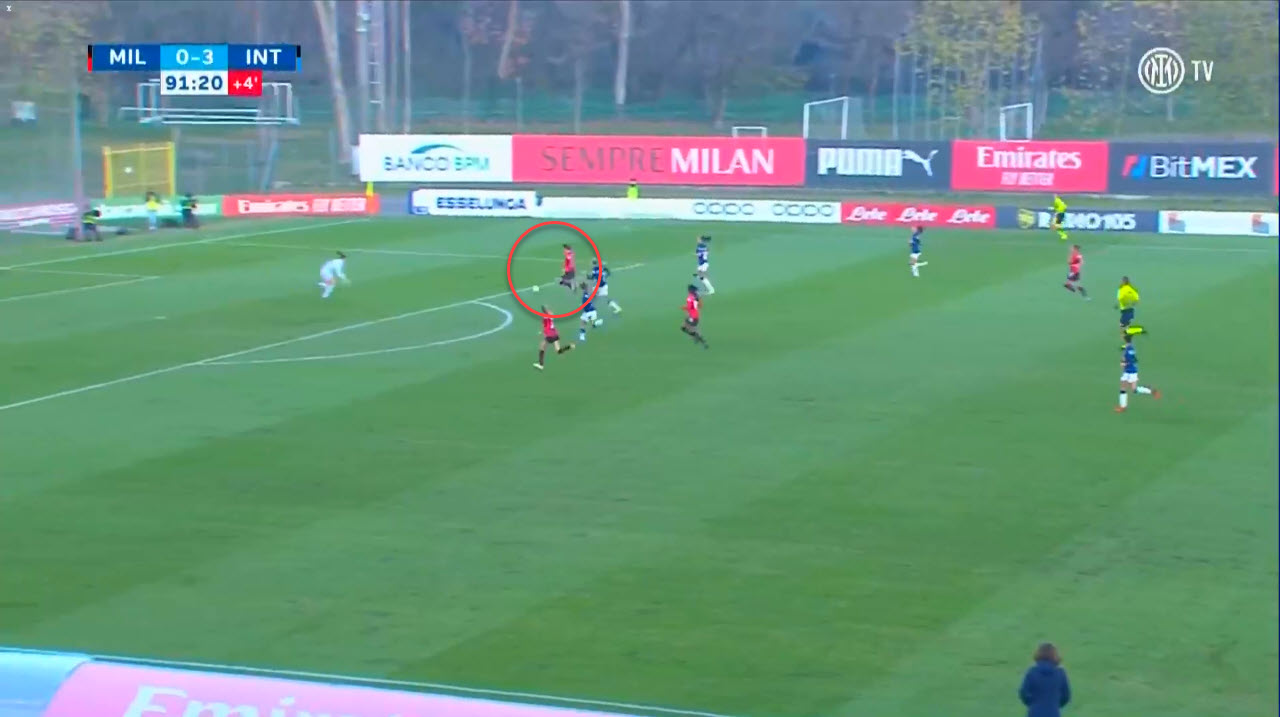 And although Milan had zero smart passes, Inter attempted such passes nine times, with four accurate ones. But what is more important is that the Nerazzurre knew exactly how to exploit Milan’s defensive mistakes and naivety at certain times. For instance, in their second goal action, Inter intercepted the ball when Milan were trying to build up from the back. Agard‘s advancement in the previous action and her lazy return to defence created room for manoeuvre for Inter’s attacking players who directly started the counter-attack through Nchout. The latter exploited the fact that Árnadóttir was obliged to mark Karchouni and that Milan’s defence was unbalanced due to the absence of Agard. Therefore, she found some room for shooting and her shot went inside the net since it was powerful and well-angled. 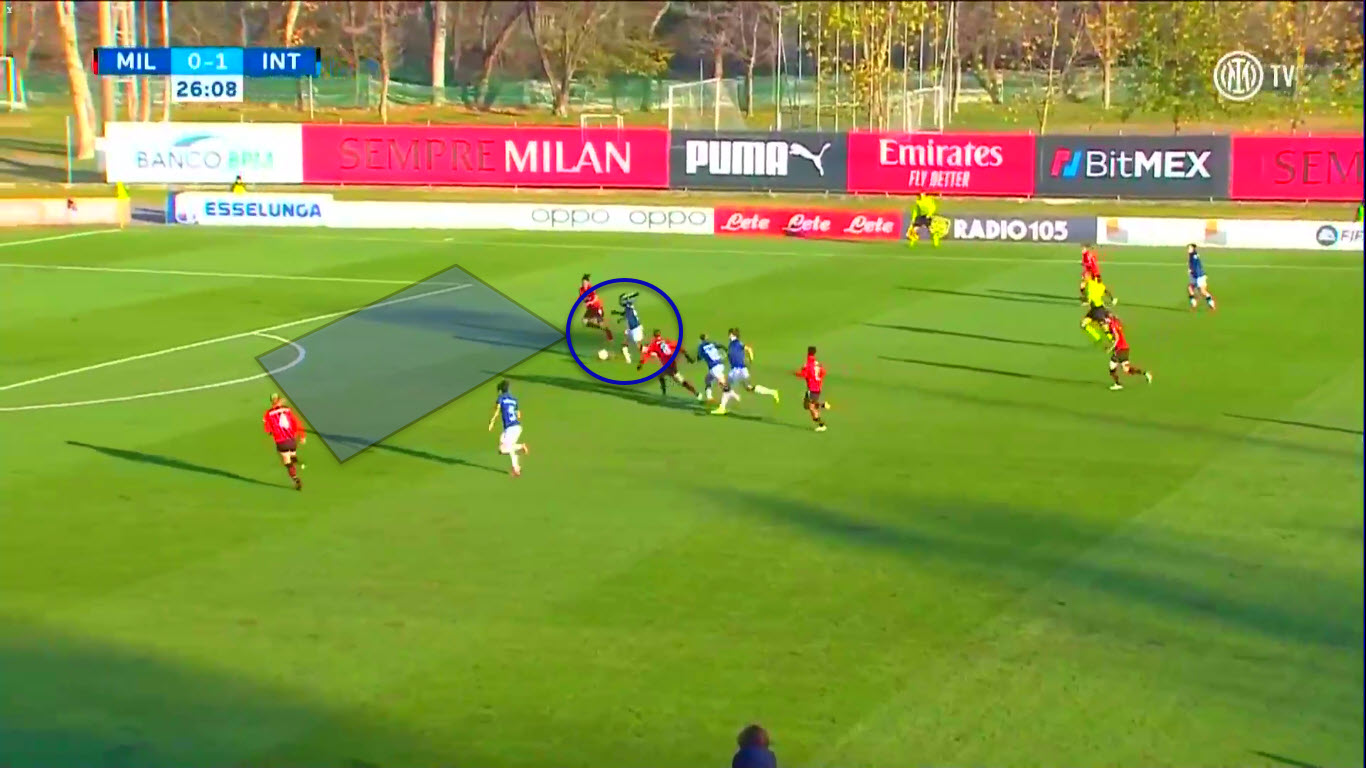 When looking at Inter’s performance, the satisfying thing is that they didn’t cease from attacking and didn’t retreat despite being ahead in terms of result. They shot 16 times with eight shots on target and were dangerous throughout the match. Plus, Milan gave them an additional gift when Adami deflected an Inter shot with her hand inside the box, awarding Inter a penalty that killed her team’s hopes of getting back into the match. Karchouni exploited the occasion and scored the goal with a Panenka shot.

Overall, Inter knew how to deal with most of the situations that occurred during this match, especially in attack. And this granted them three important points against one of their biggest rivals if not the biggest.

On the other hand, Milan need to reconsider numerous things after this performance as they are becoming unable to score or create as many dangerous actions per match as needed.  Moreover, the numerous defensive mistakes committed in a single match are worrying for the team especially when knowing that their next opponent will be one of the best in terms of attack and attacking players’ level.