Bundesliga 2021/22: How Bayern overcame Dortmund in a top of the table clash – tactical analysis

On Sunday afternoon, Borussia Dortmund and Bayern Munich went head-to-head in a Bundesliga fixture with heavy title race implications – as per usual. Had Borussia Dortmund been able to pull off the win at home they would have leapfrogged their title rivals, but instead, it was Bayern Munich that came through with a late winner to take all three points and extend their lead at the table to four points. For Bayern to surmount such a lead at the top of the table coming into the Christmas break will be music to Bayern fans’ ears who have become accustomed to them putting together stronger second half of the season runs in recent years.

It was an even game, with Bayern’s 1.96xG edging Borussia Dortmund’s 1.36 xG but in truth, it was a very open game where both sides would have felt they deserved the three points on the day.

This tactical analysis will break down some of the key tactics seen in this game, providing an analysis on where both sides looked to impose their game on the other. 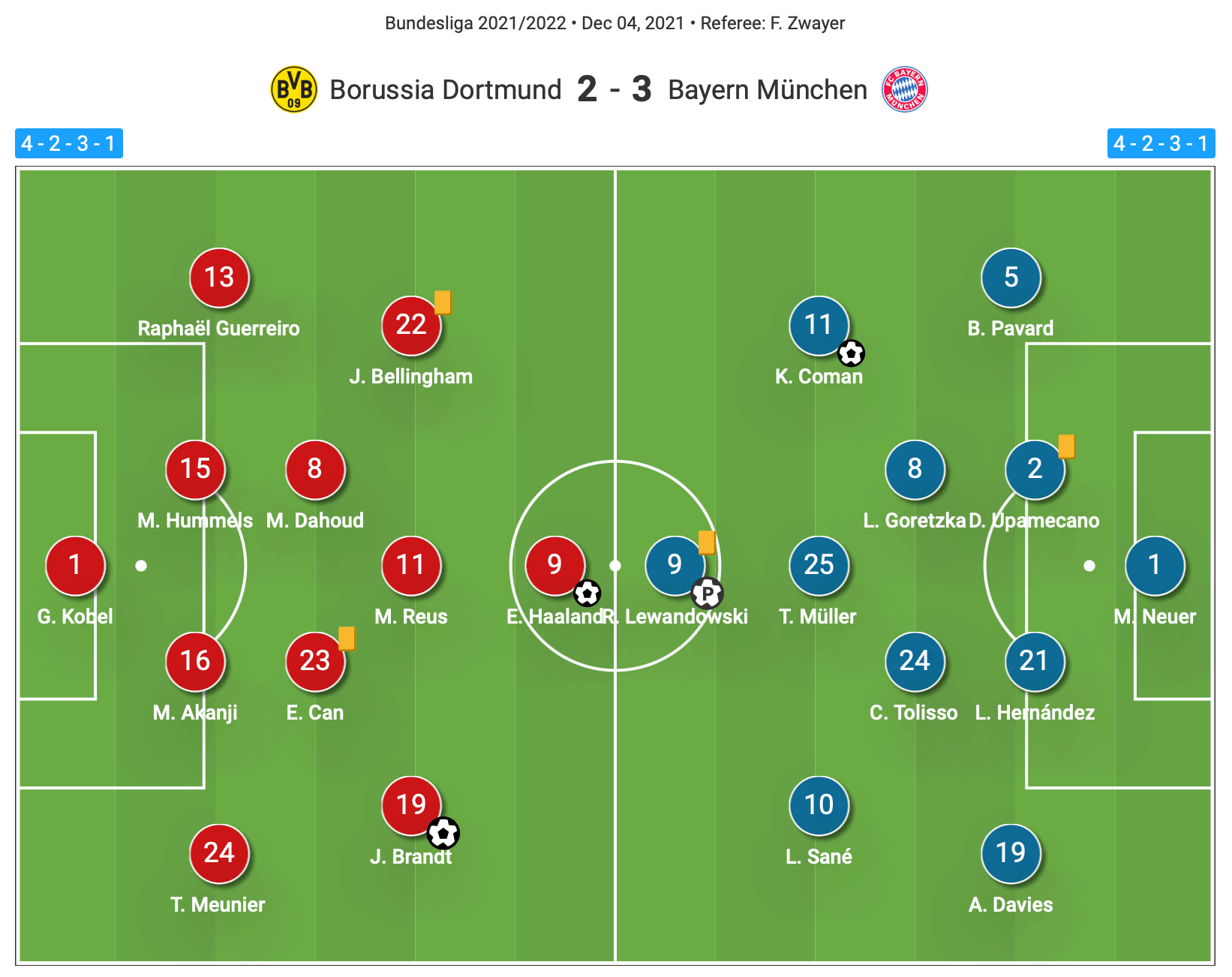 Both teams lined up in a 4-2-3-1. For Dortmund, Gregor Kobel started in goal with a back four of Raphael Guerreiro and Thomas Meunier at full-back, with Manuel Akanji and Mats Hummels partnering one another in the centre of defence. In midfield, Mahmoud Dahoud and Emre Can worked as a double pivot, with Dortmund then utilising a very fluid attacking trio. Jude Bellingham lined up on the left, however, at times would drift inside, even if he also did a stellar job providing a wide presence at times too, whilst Julian Brandt operated on the right. Marco Reus started as the 10 but would push up to join Erling Haaland upfront at times, particularly in the second half where there were moments he was even further ahead than his Norwegian teammate.

Bayern lined up in their lopsided 4-2-3-1 with Dayot Upamecano and Lucas Hernandez at centre-back together and Manuel Neuer behind them in goal. Benjamin Pavard played at right-back and Alphonso Davies at left-back. Pavard was restricted in how far he pushed forward, often sitting deep enough to allow Davies to push up the entirety of the left-flank. This in turn provided the freedom for Leroy Sane to drift inside. Leon Goretzka and Corentin Tolisso started as the double pivot with Thomas Muller in front of them in a free role. Kingsley Coman started on the right and played very high on this flank over the course of the game. In attack, Coman and Davies would regularly stretch the width of the pitch, allowing the likes of Sane and Muller the freedom to drift into different spaces in central areas and cause problems for Dortmund’s defence. Robert Lewandowski started upfront.

A better view of what Bayern looked like in possession can be seen in the following graphic. As previously mentioned we can see just how much autonomy Davies was given down his left flank, whilst Pavard on the other side had a more conventional full-back – winger relationship with Coman ahead of him in a high position. Muller generally appeared to stick slightly to the right of Lewandowski for much of the game. With Coman playing high and wide on the right-flank it opened up plenty of space in the half-space for him to offer line-breaking pass options or to run in behind if Coman was able to receive to feet and draw Raphael Guerreiro forward in doing so. 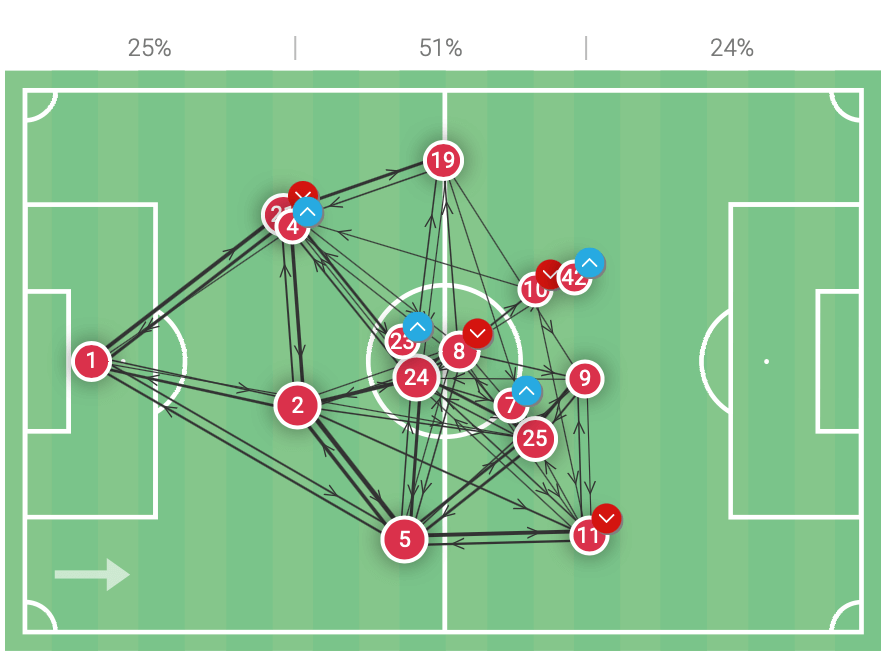 We can see this shape in further detail in the image below. Firstly we can note the width in Bayern’s attack, with Davies and Coman equally high, whilst Lewandowski occupied both of Dortmund’s centre-backs. Sane then occupied the half-space, dropping deep in this case to get on the ball. We can also see the aforementioned positioning of Muller between the lines, and in between Lewandowski and Coman. The final aspect worth noting is that Bayern operated with both centre-backs anchoring the play rather than Pavard coming inside to consistently give them a back three in build-up play at all times, as they have done so often. Whilst he would play deeper, certainly more so than Davies, he didn’t often tuck inside. 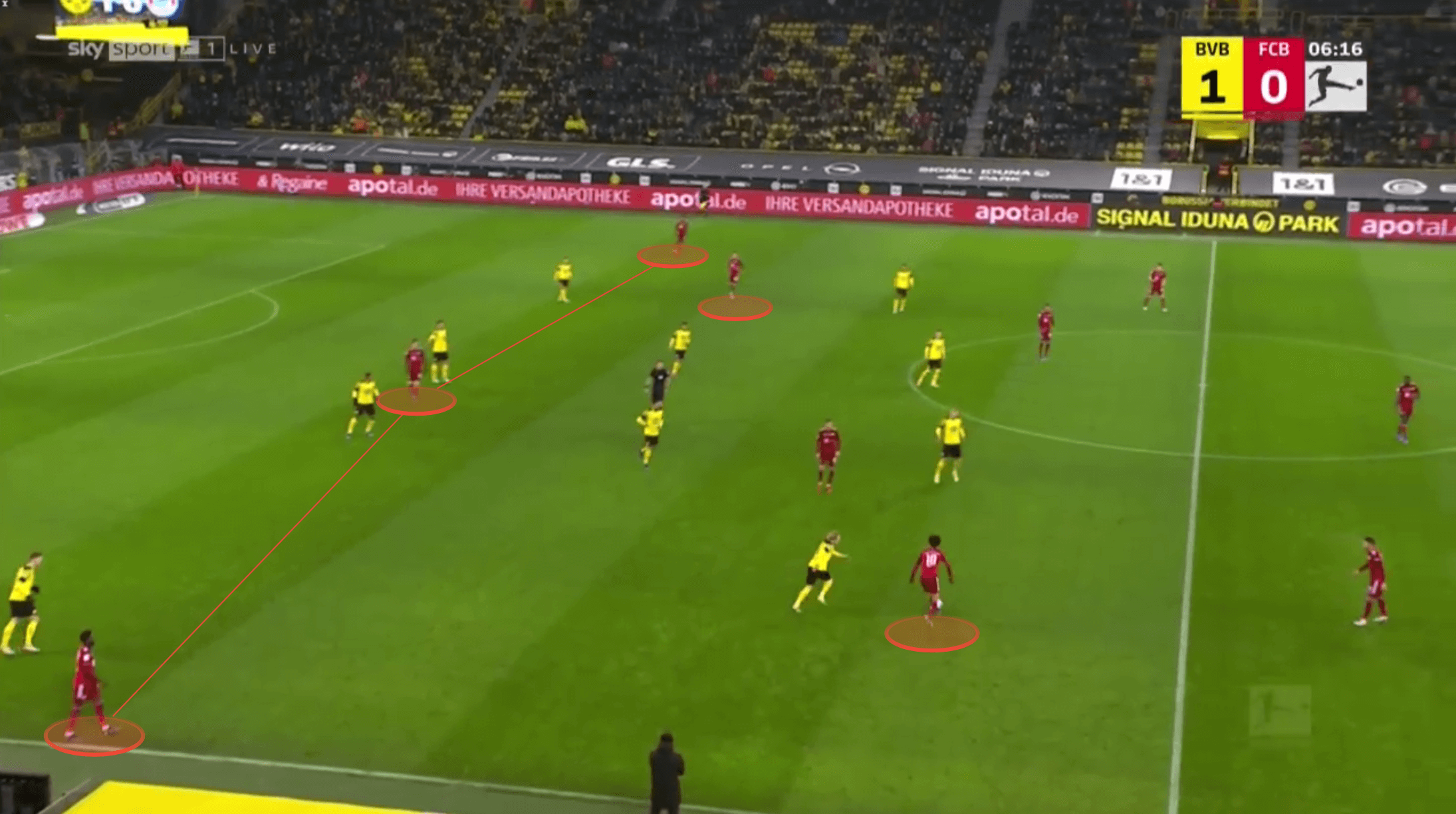 This was a risky tactic and led Bayern vulnerable, particularly with Dortmund’s purposefully compact defensive shape, of course blocking central passage, but equally setting them up to counter directly and quickly overload Bayern through the central channel should they have regained possession. 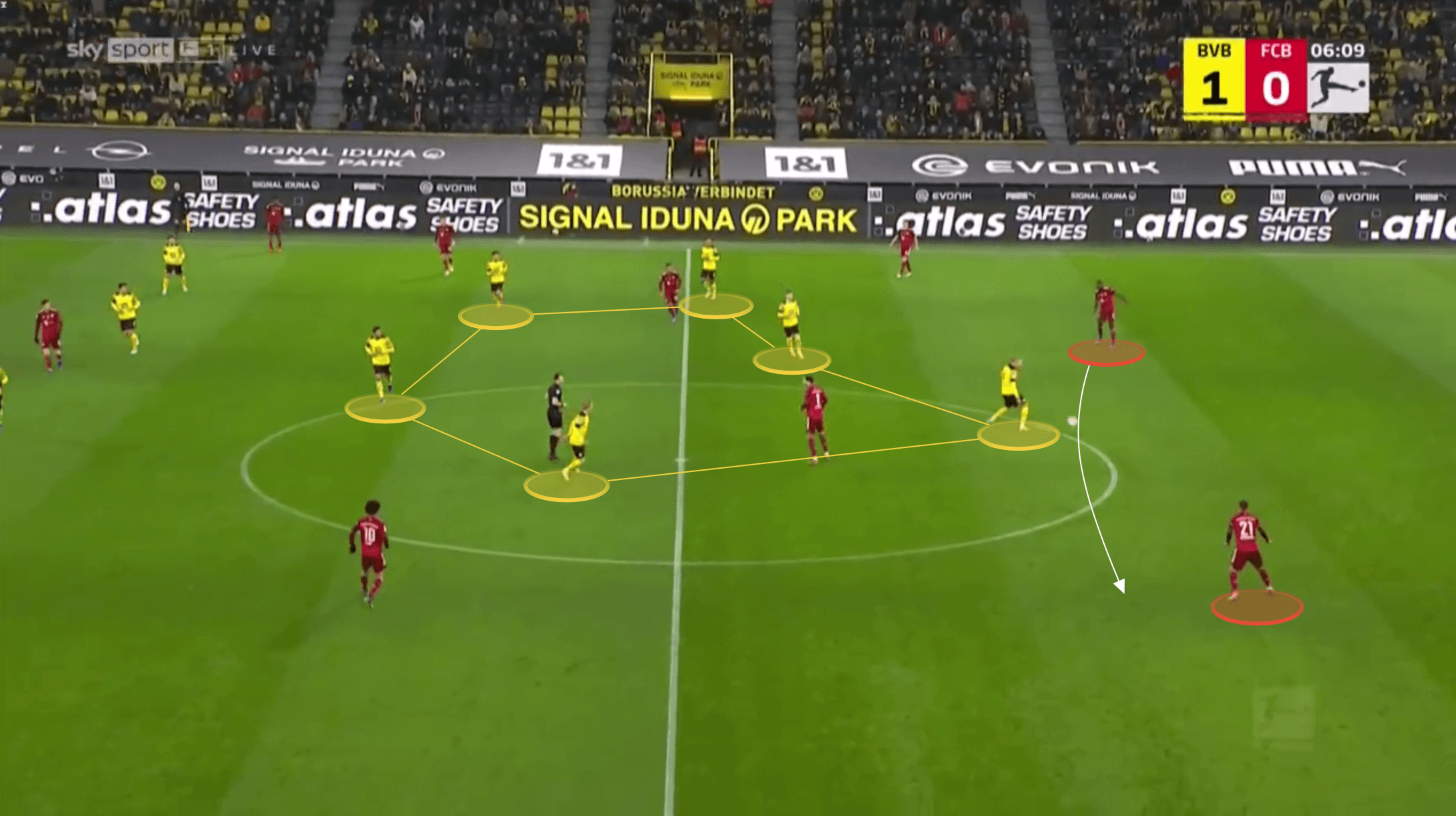 Both teams threw caution to the wind during this game, pushing numbers forward in attack and seemingly refusing to adjust their tactics to the other, instead looking to impose their own game plan on the opponent. What this led to, on a number of occasions over the course of the game, was the defence not having an overload and in turn this resulted in a number of chances, and even goals, coming from this.

Bayern’s equaliser to make it 1-1 came admittedly from a mistake from Hummels. We can see him in possession in the image below, bizarrely choosing to play back into the area the ball had just come from, and with two Bayern attackers pressing him, rather than to stretch the play out wide to Raphael Guerreiro and drop off to provide an instant pass option after this pass. 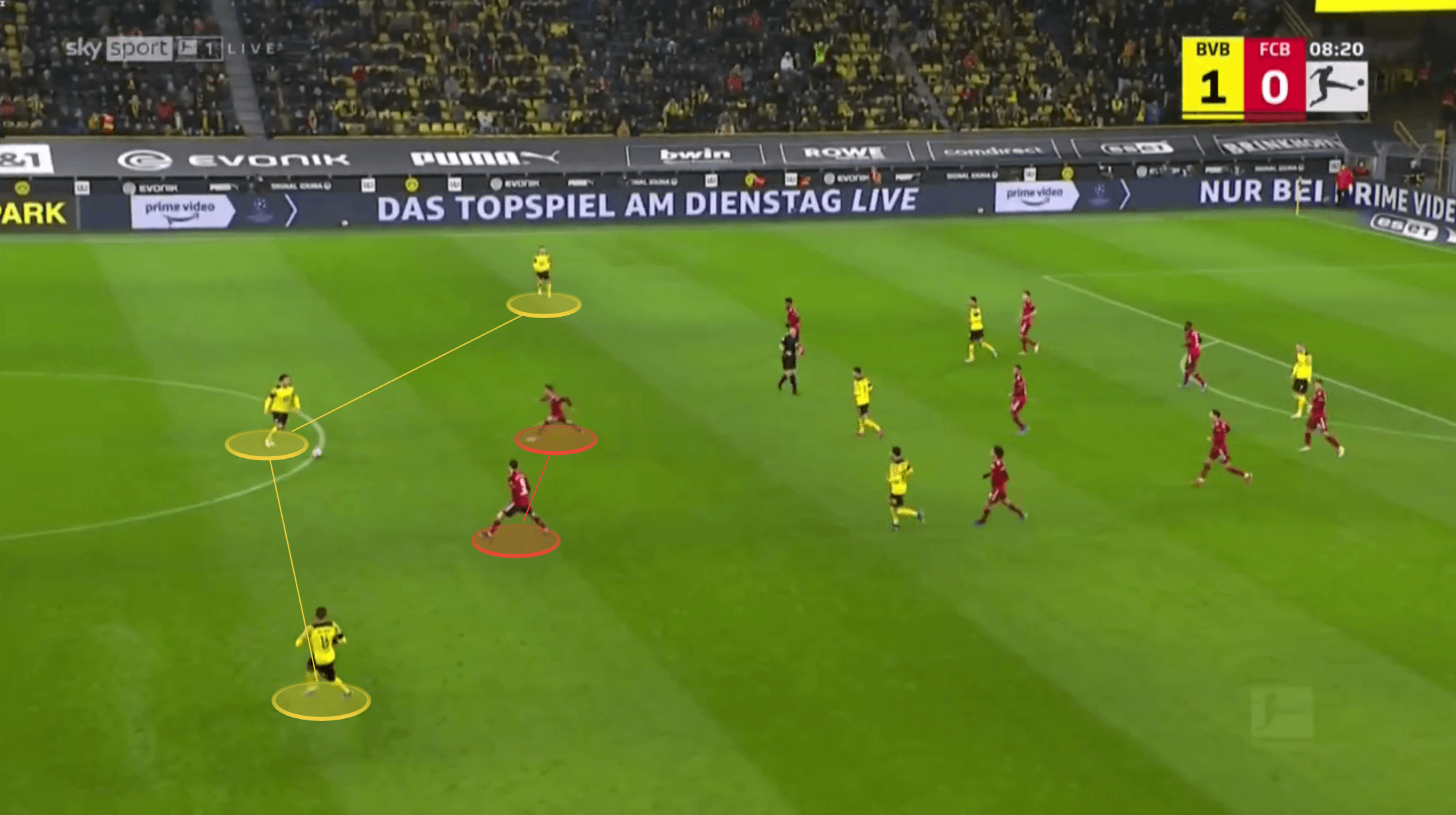 Instead, he played a forward pass which was intercepted by Bayern’s front two that led to a rather scrappy 2v2 battle. The duel ended with Robert Lewandowski having the ball just inside the Dortmund penalty area, before expertly finishing at Kobel’s front post. 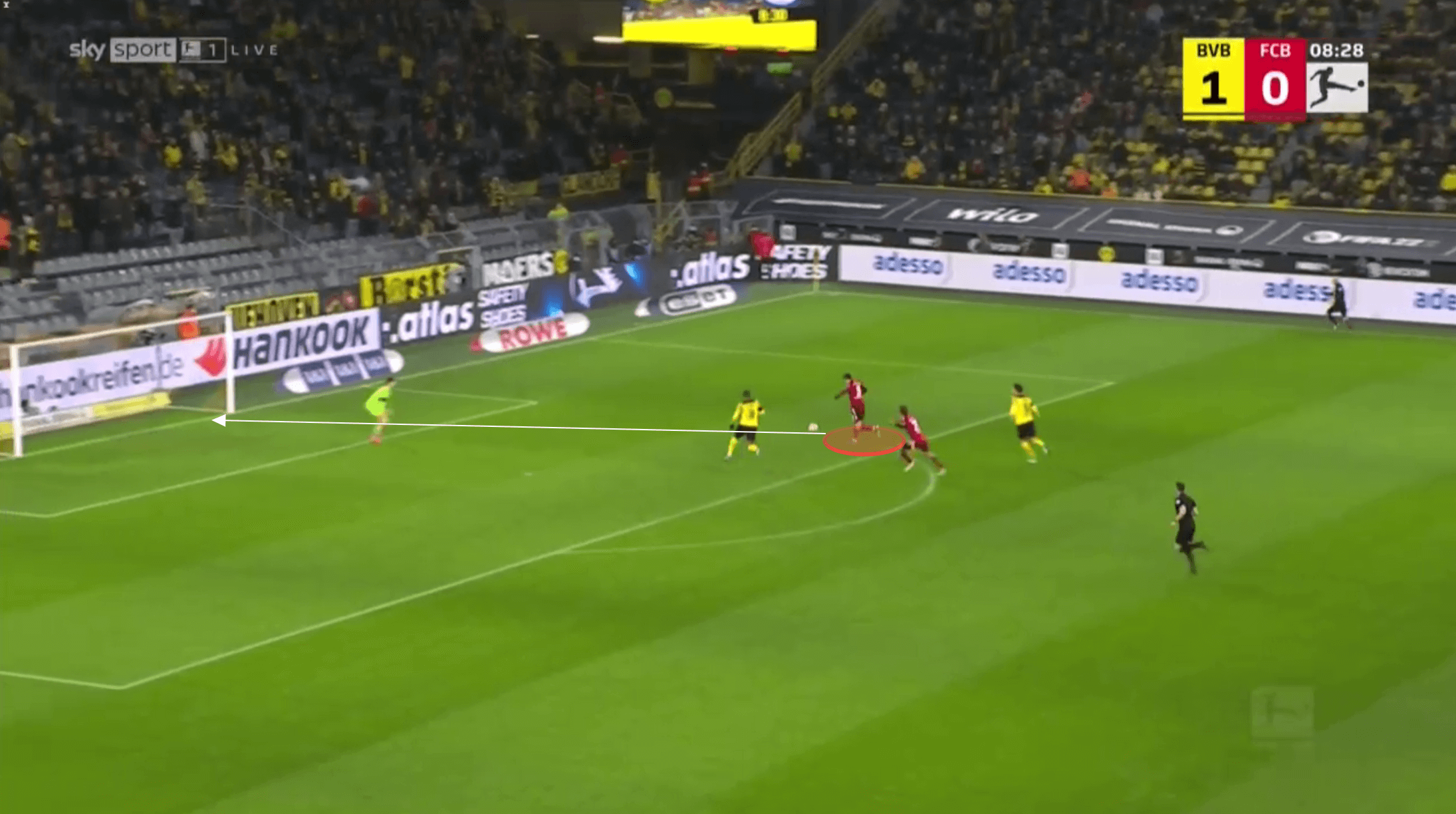 Seeing Dortmund’s defence unorganised and stretched against Bayern’s attacking core was an all too common sight during the game, with them losing possession during build-up play and them not having ample cover centrally to prevent a quick break directly down the middle of the pitch. We can see just how overloaded they were at times from the image below with four Bayern attackers running at two Dortmund defenders, who weren’t compact due to the loss of possession. 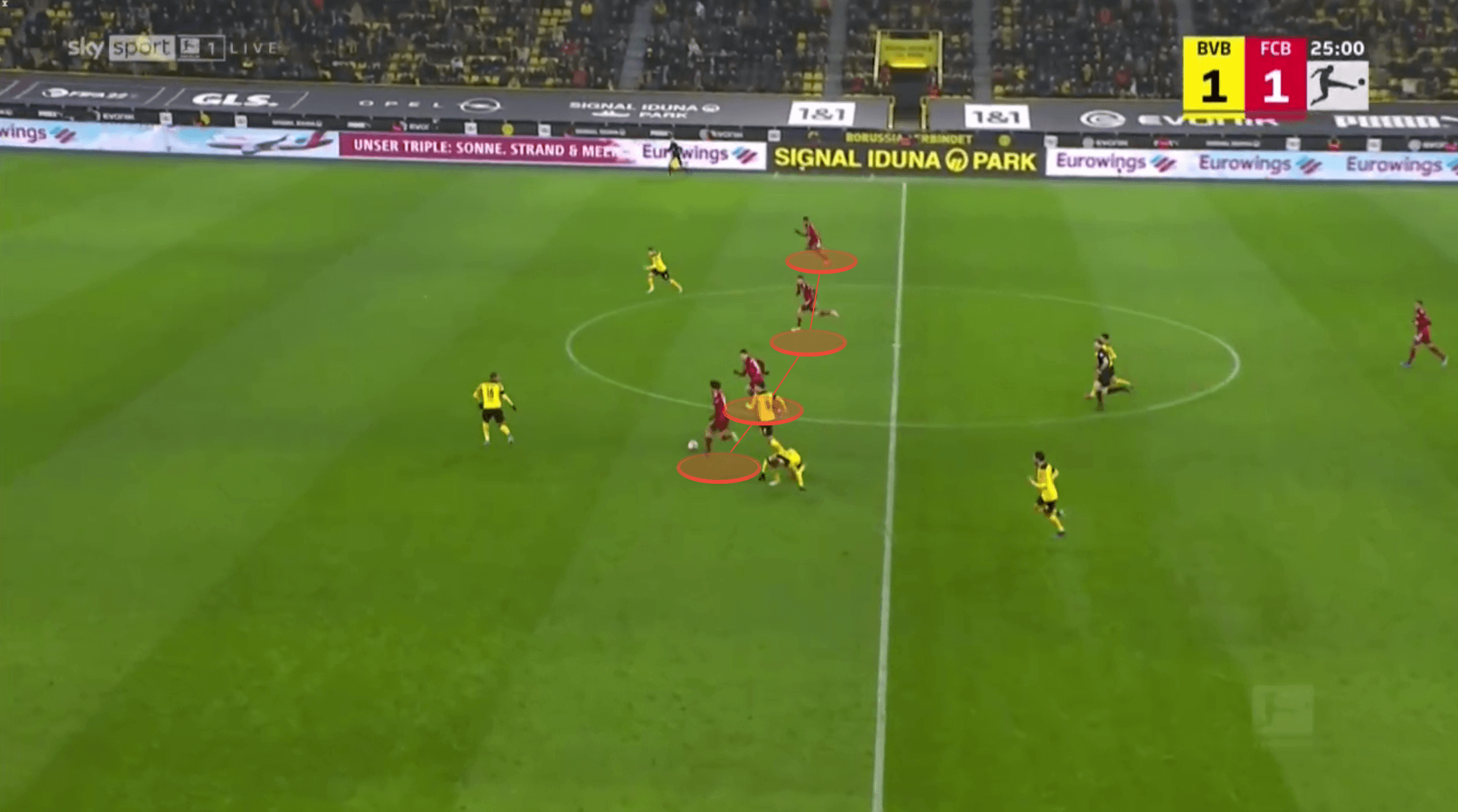 Yet it wasn’t just Dortmund who struggled with this issue over the course of the game, and Bayern allowed themselves to get caught out too. Bayern frequently leave just two players back, often anchoring possession in advanced attacking phases from well inside the opposition half. Yet they didn’t adjust this for this game, despite the obvious threat of Haaland – a player who thrives with space behind the opposition defence to attack, particularly on a quick break.

Such an example of this issue occurred in the 29th minute where Dortmund committed high numbers back to defend a Bayern attack. Sane was unable to get a shot away on goal in the image below, and Dortmund were able to clear their lines. 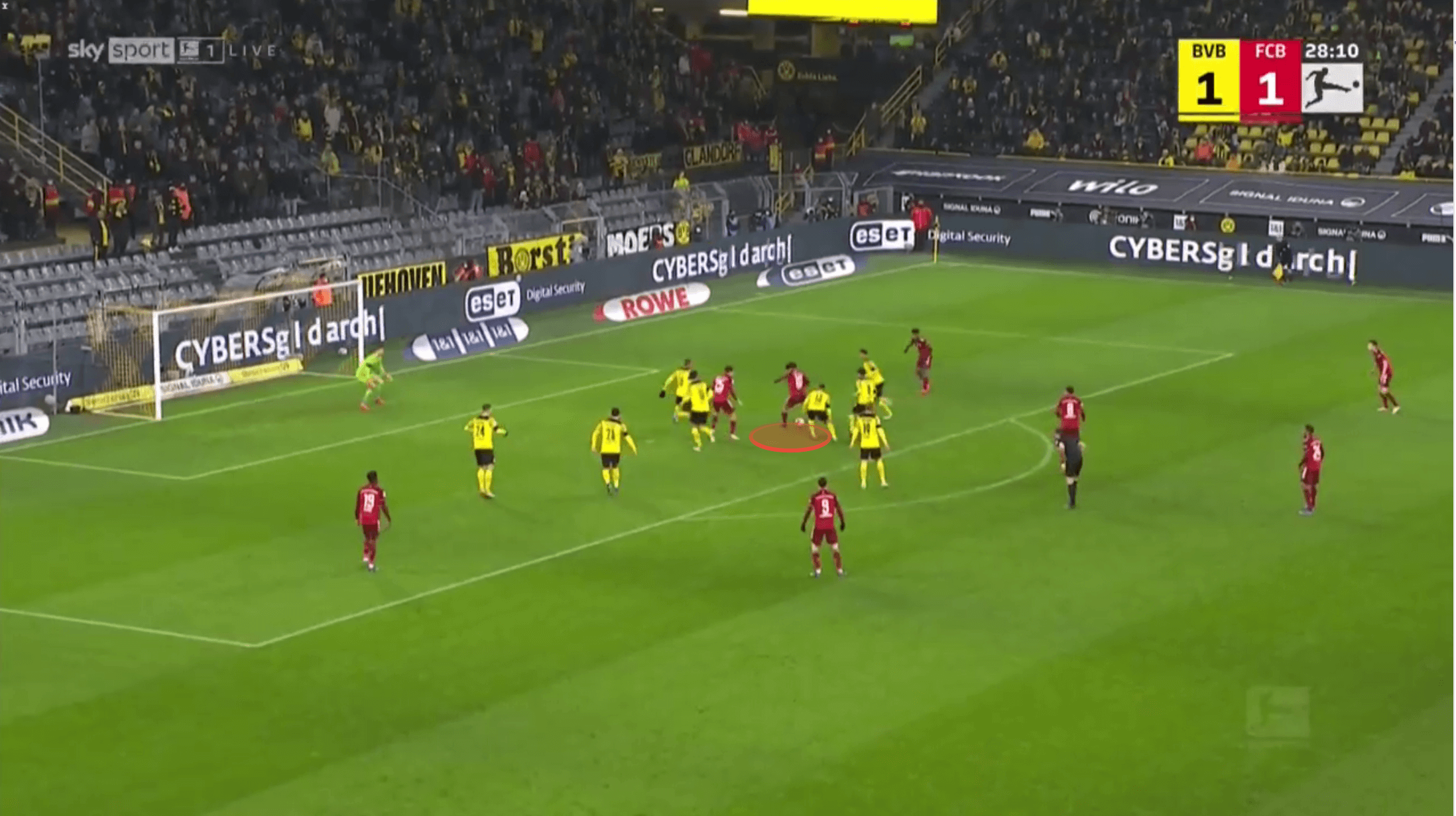 The clearance went long into Haaland who along with Reus was able to quickly play past the two Bayern defenders with a quick interchange. Haaland dropped the ball back to Reus with a first-time pass before turning and accelerating past Upamecano. 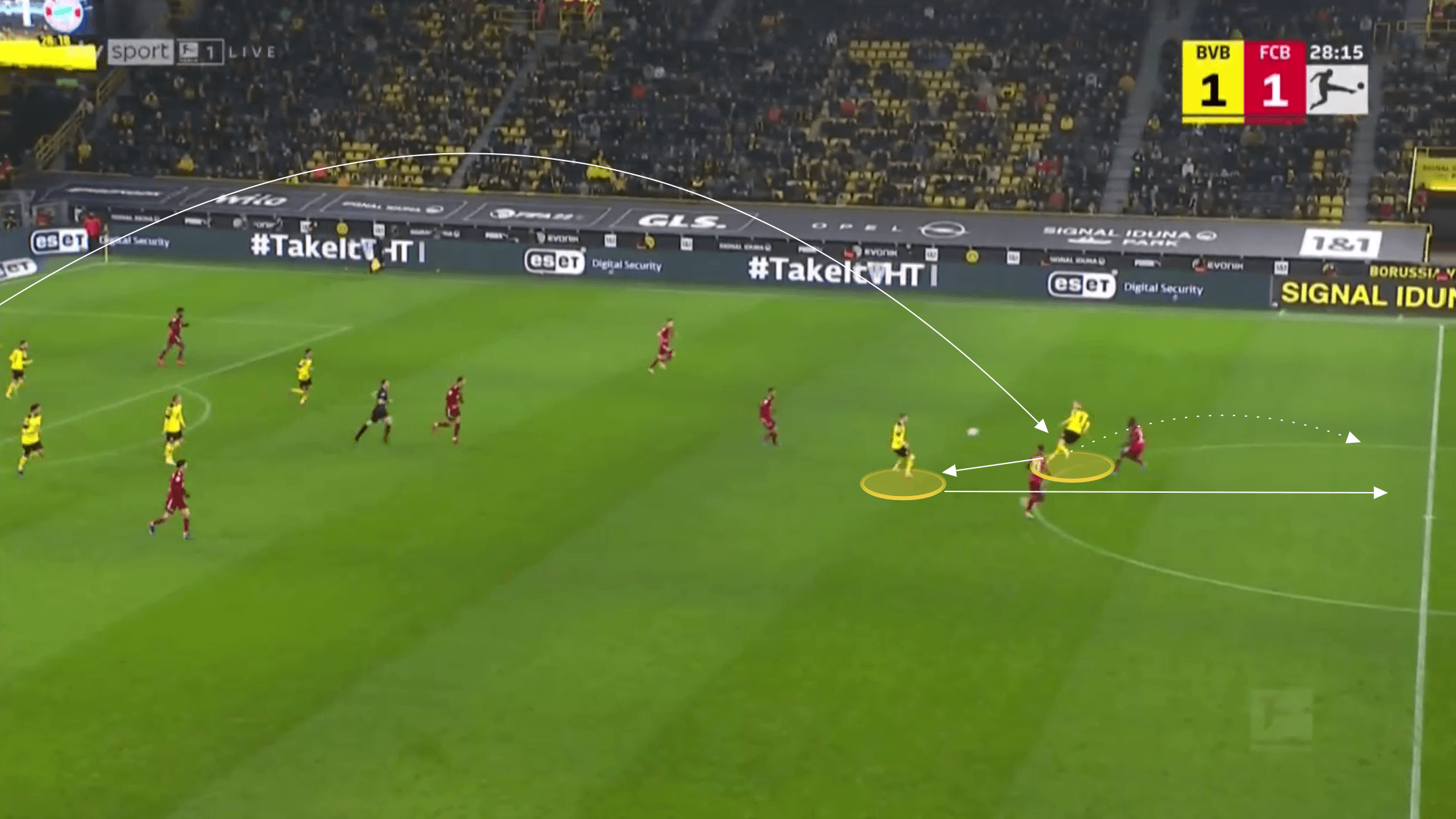 In this instance he ran through on goal and missed the far post by an inch, however, his presence on the game consistently created chances for himself or his teammates, and whilst he got his goal in the 48th minute, in truth he could have had a couple.

Despite Haaland being closely supported by Reus in the previous example, there was plenty of action where the young forward was left isolated against Bayern’s centre-backs. He played consistently high, stretching the pitch as much as possible, and he did an excellent job occupying both Hernandez and Upamecano over the course of the game. We can see this from his average position in possession shown in the pass map below. It’s noticeable the amount of distance between himself and his midfield. 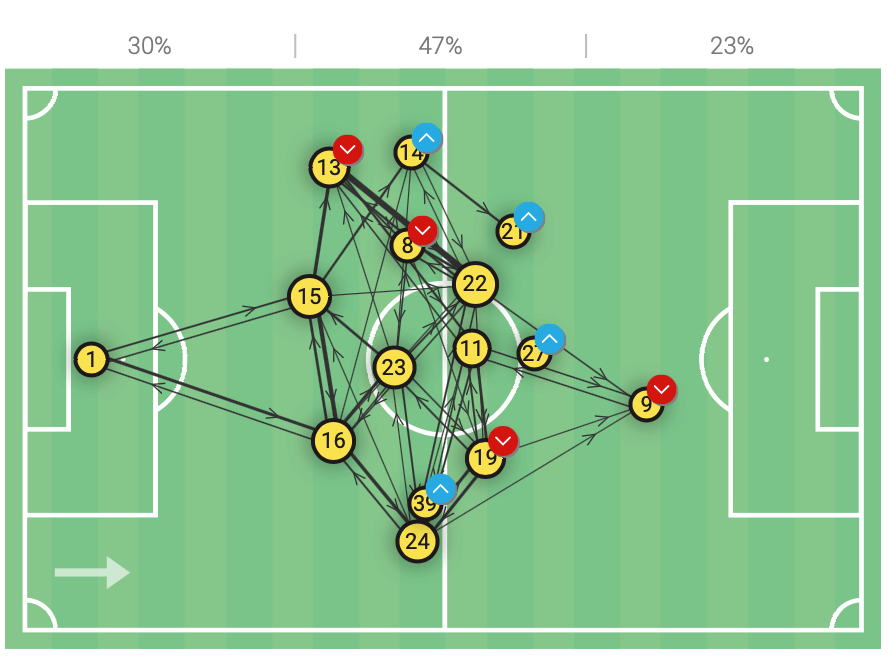 Dortmund’s first goal appeared to be straight off the training ground with Dortmund looking to exploit the defensive weakness of Davies at left-back. This was possible due to Haaland’s presence ensuring Hernandez and Upamecano sat on the forward, whilst Reus pushed in between Upamecano and Pavard, seen in the image below, meaning the french centre-back also had to be aware of Dortmund’s captain’s positioning. Brandt lingered in the midfield. 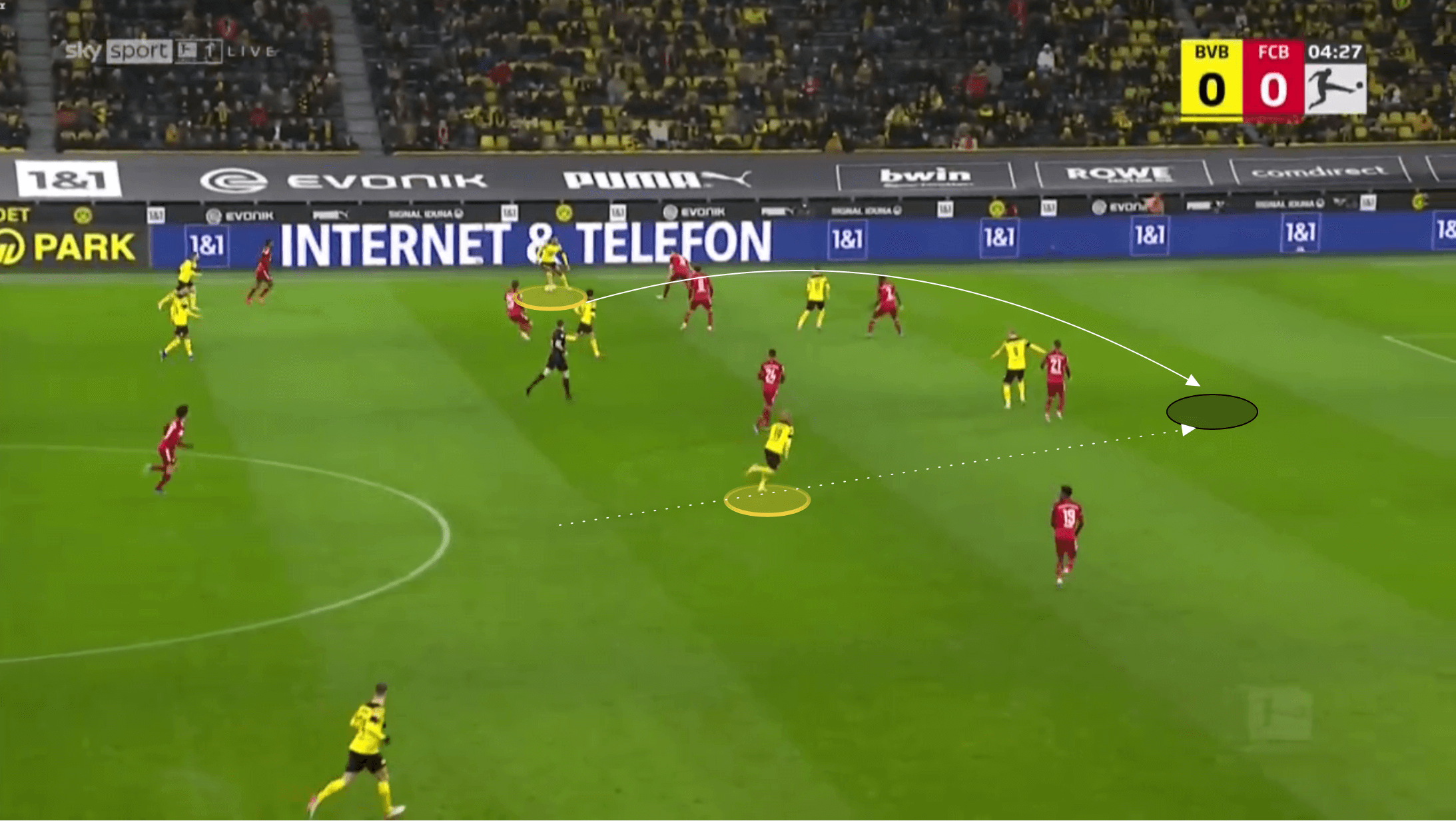 Haaland drew Hernandez over enough before Bellingham lifted the ball over the top of Bayern’s defence for Brandt to run onto in the space behind Haaland which the forward had created with his run. Davies saw the run from Brandt but all too late, and Brandt was able to put the home side ahead from this move. 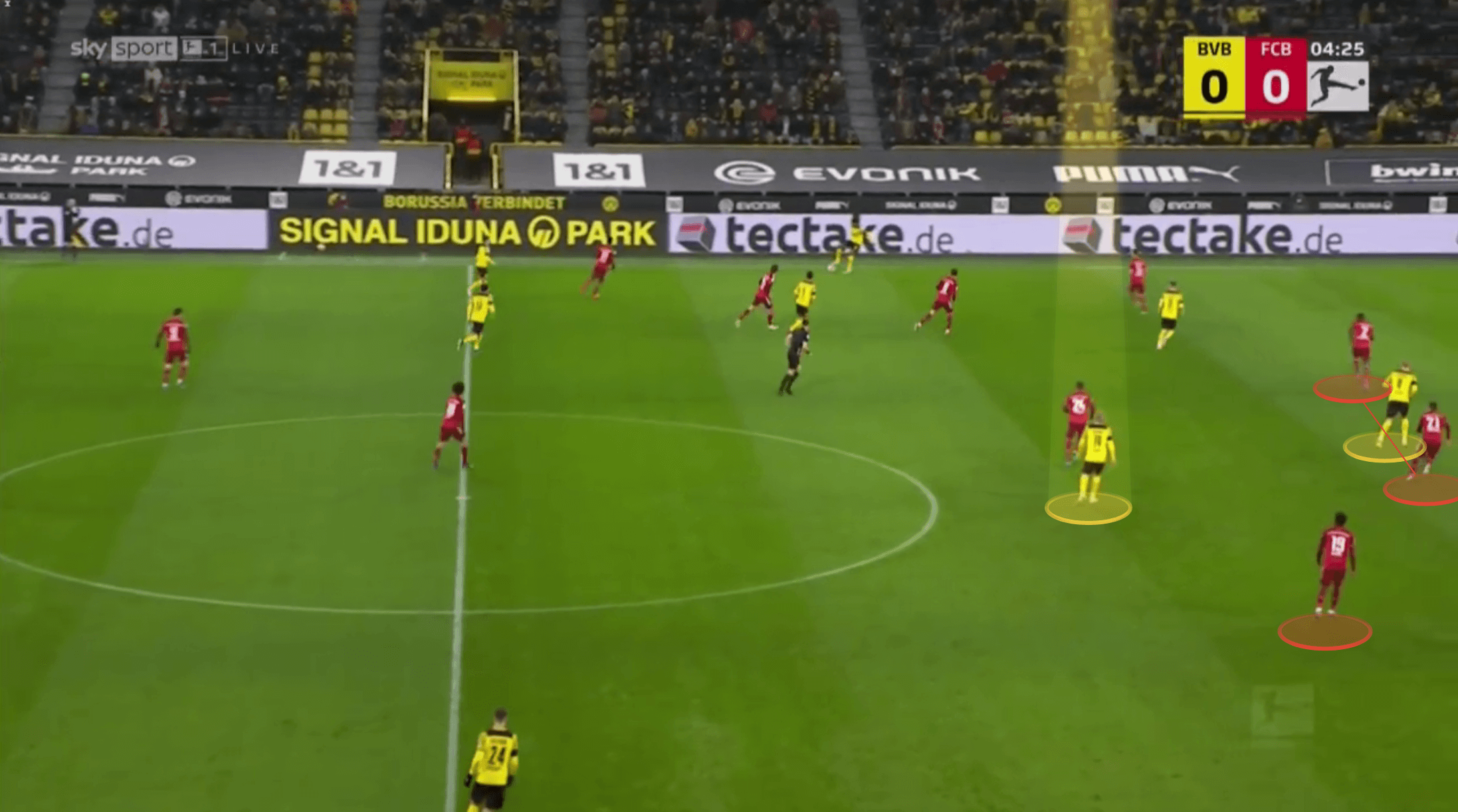 Haaland’s movement in the final third is truly exceptional, and whilst he is a finisher of the highest quality, it is this movement that sets him apart from so many of his peers. Without doubt, there are few if any forwards, who show such intelligent movement to create space for themselves on a consistent basis, which leads to goals, as Haaland does. For his goal in this game, which drew Dortmund level, Haaland reacted to the through pass played in behind for Meunier by immediately moving away from the ball, leaving the marking of Upamecano and heading towards the back post, behind right-back Pavard. 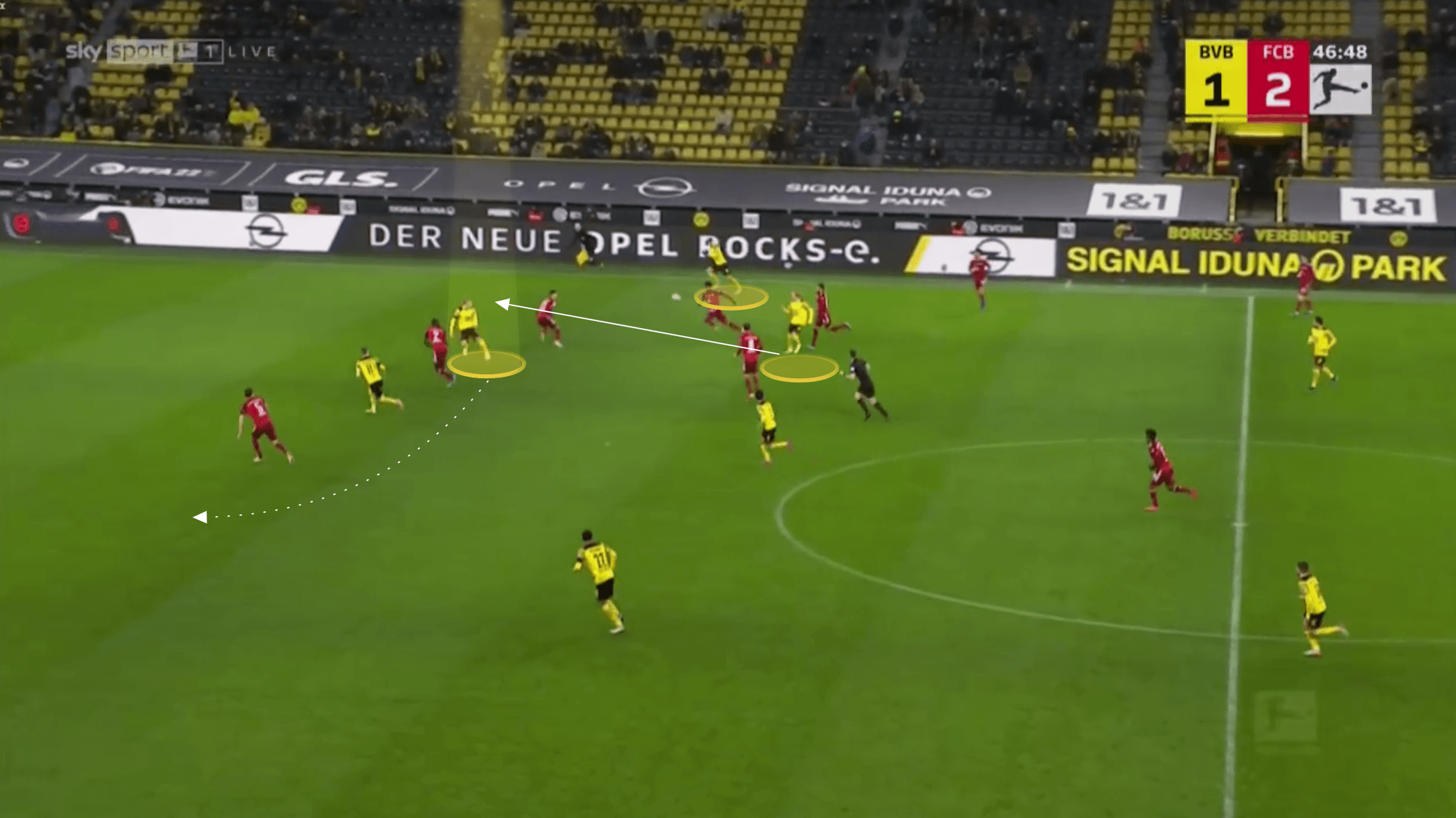 The ball came into the box and wasn’t dealt with by Bayern’s defence before it reached Bellingham at the edge of the box. The 18-year-old English midfielder then calmly slotted the ball out wide to the unmarked Haaland for his second assist of the game. Haaland’s finish was of the highest quality. We can see the bend he managed to get on the ball, with his weaker foot, to curl the ball into the far post past Neuer. 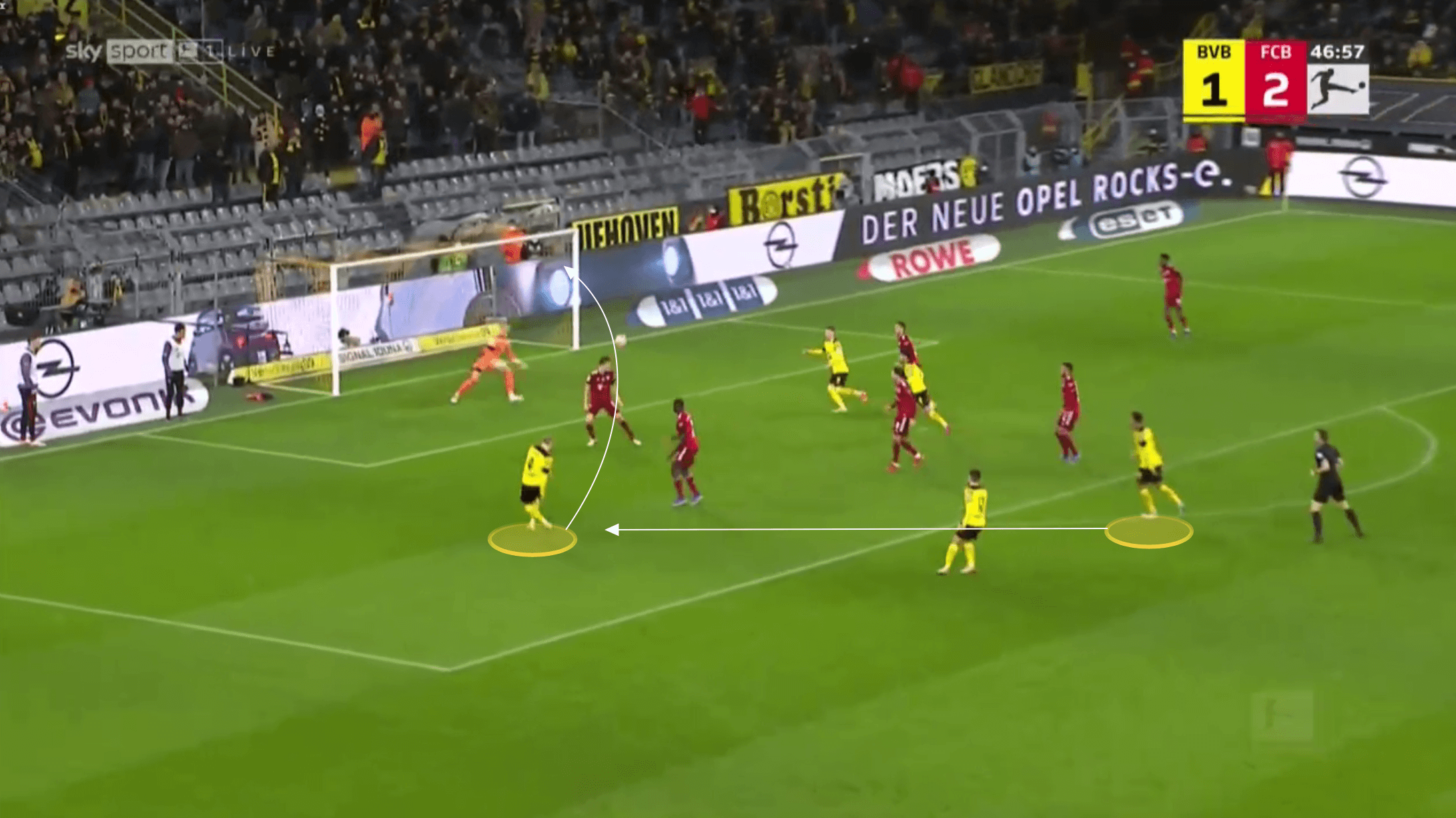 Haaland was consistently a threat over the course of the game, and was a willing runner for any long ball played forward by Dortmund whether purely to relieve pressure or in an attempt to find their forward. Even if he didn’t get on the end of these long balls, his pressure and desire to get on the ball would prevent Bayern’s defenders from being able to deal with it emphatically, and Dortmund’s midfield were consistently ready to latch onto any loose balls that dropped into the space behind Haaland. 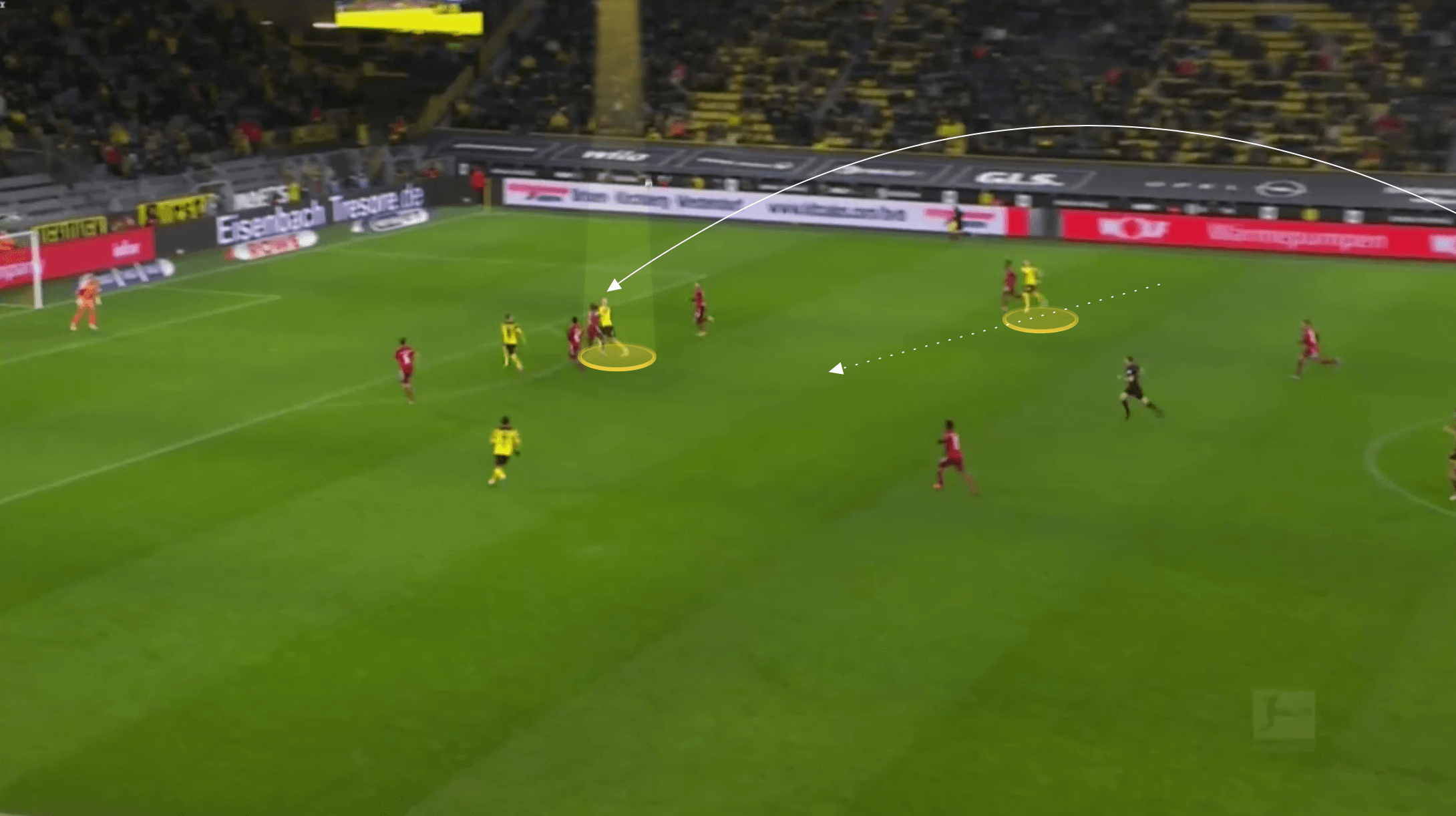 It was a close result and both teams played an open game, that whilst it lent itself to making an end-to-end spectacle, there were times where their defences were left exposed. In attack, Haaland’s presence created opportunities for himself and his teammates, whilst Bayern were ruthless on taking chances given to them with Lewandowski responding in perfect style to his Ballon D’or snub. It is early in the season, so it’s important not to get carried away with anything, however, this result is an important one for Bayerns o easily in the season, and gives them a healthy four-point gap leading into the final three league games before the winter break.