On Saturday evening Roma faced Inter in a game which was crucial for the rest of the season. Currently, Inter sit in third while Roma are desperately fighting for Champions League qualification with AC Milan. After a chaotic season with the likes of Monchi and Di Francesco getting sacked, Roma are now trying to save the season with Claudio Ranieri.

Against Inter they needed a win to make a big step forward in the race for Europe’s top table next season. However, in a game dominated by Inter, Roma had to live with one point. In this tactical analysis, we are going to examine the attacking problems of Inter, as well as the defensive strategy and the use of Džeko as the only attacking threat for Roma.

Ranieri and Spalletti trust the classic 4-2-3-1

Under Luciano Spalletti, Inter have stabilised and developed into a top-class thoroughbred of Italian football again. After they reached the Champions League last year, they are currently heading for another successful season. After years of mediocre performance, the fans can slowly start to dream about the Italian championship, although Napoli and especially Juventus seem to play much better football.

Against Roma, Spalletti used a 4-2-3-1 with Samir Handanović in goal, Milan Škriniar and Stefan De Vrij as centre-backs and Danilo D’Ambrosio at right-back while Kwadwo Asamoah defended on the left side.

In the build-up, they often got supported by Matías Vecino who moved higher once Inter reached the halfway line. Then Borja Valero was in control of the game, dictating the attacking rhythm and serve as a linking player in the centre.

While Radja Nainggolan performed poorly against his former club as a number 10, Ivan Perišić had a solid game, not only scoring the equaliser but also bringing speed into Inter’s slow attack. While Perišić was positioned on the left side, the agile Matteo Politano played on the right wing. Both wingers tried to connect with striker Lautaro Martínez playing instead of Mauro Icardi. 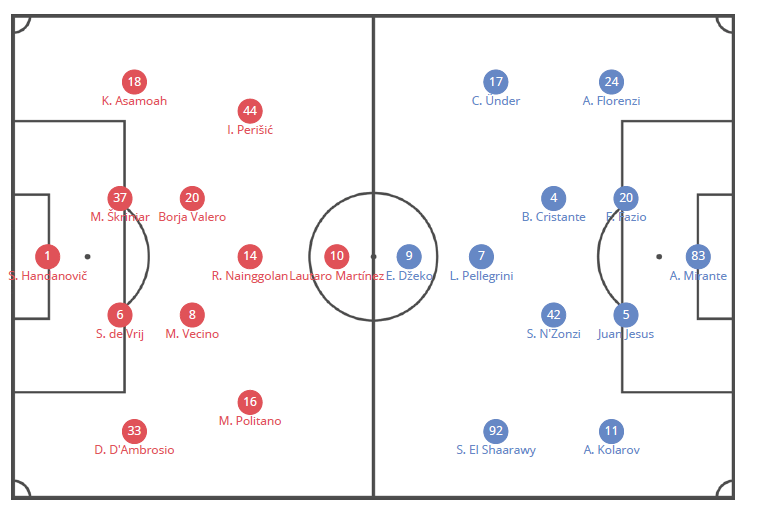 Claudio Ranieri, on the other hand, focused on defensive stability. Roma started with Antonio Mirante in goal while Federico Fazio played next to Juan Jesus who had to replace Manolas right before the game. Captain Alessandro Florenzi defended on the right with Aleksandr Kolarov on the left.

The midfielders Steven N’Zonzi, Bryan Cristante and Lorenzo Pellegrini focused more on defensive work, trying to make the centre as compact as possible. At the beginning of the game, Pellegrini defended with Džeko in one line but would later drop deeper to support Cristante and N’Zonzi.

On the wings, Roma tried to take advantage of the holes in Inter’s defence with two quick wingers in Cengiz Ünder and Stephan El Shaarawy. Both tried to support striker Edin Džeko but rather deepened on him as we can see later in our tactical analysis.

One thing that caught the eye was the performance of Inter in possession. Even though they have talented players, the attacking outcome is rather limited. One reason is clearly the awkward positioning and the focus on the wings as the most-used attacking zone.

Due to the midfield pressing of Roma, Inter dominated the game and rarely had problems in the first build-up phase. Usually, the full-backs stayed wide trying to stretch the opponent’s pressing. The centre-backs, especially Škriniar, were involved in the build-up and got supported by Vecino who often dropped deeper, while Valero was positioned behind the first line of Roma.

However, neither the centre-backs nor the defensive midfielders effectively occupied the half-spaces. Sometimes you could observe the centre-backs moving into the channels, but this was more spontaneous and less planned, leading to below par passing angles. 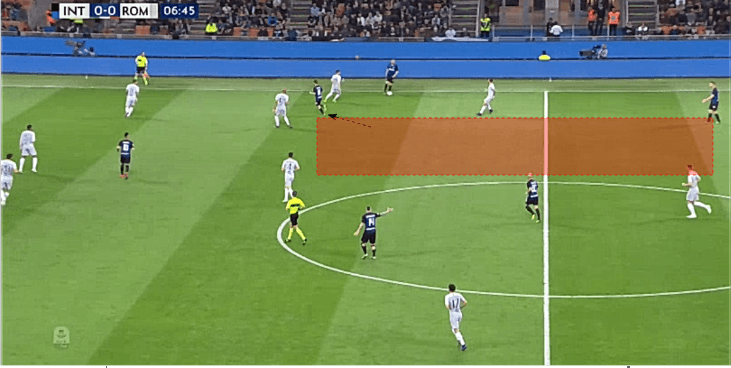 In this example, D’Ambrosio can’t use the red-marked space quickly which could Inter help to advance because no one supported him and Politano moved away.

In the first 15-20 minutes, Nainggolan occupied the left half-space while Perišić stayed wider, next to the full-back. Politano on the other side moved into the channel in order to create more passing options. However, the lack of connections and inaccurate positioning led to a fairly static and slow attacking game which was easy to defend for Roma. 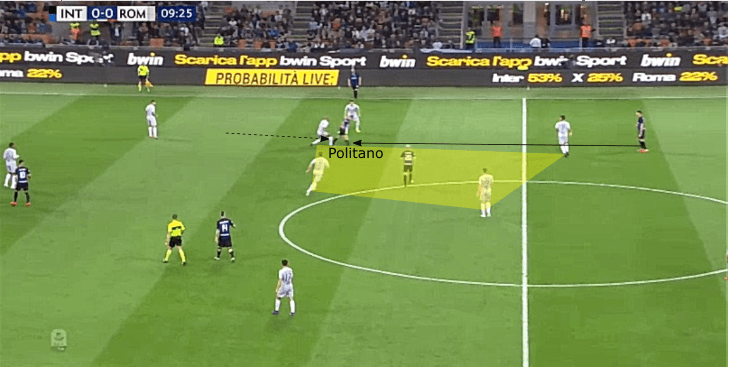 Here, for instance, Politano receives the ball and immediately gets pressured. He plays the ball to Valero whom Roma can press with four different players. The problem for Inter? They couldn’t create an overload. Due to the lack of connections, Roma could easily step up and reduce the ball-near spaces without risking anything.

There are a few details worth considering here. Politano receives the ball in front of the defensive line which automatically forces him towards his on goal and doesn’t put any pressure on the defence. Besides that, the winger has no immediate diagonal lay-off option. The passing angles to D’Ambrosio and Valero aren’t good enough.

Last but not least, the fact that the pass is played vertically instead of diagonally makes it easier to defend because Politano can’t play a risky forward pass with the first touch due to his body position.

The main goal of Inter’s attacking plan was to overload of the centre. After a while, Vecino was positioned higher and occupied the space between the midfield and defensive line of Roma together with Nainggolan, Martínez and the ball-far winger.

The problem which arose out of that was the lack of passing options for Valero. The Spanish midfielder had to cover a lot of space alone. As a consequence, he was often too late to combine effectively. In this example, none of the Inter players occupy the space behind Džeko or the open half-space, leaving Valero alone and forcing him to play complicated passes.

Due to the fact that Inter couldn’t create any connections going forward, they struggled to move the opponent effectively. Usually, you should create as many triangles as possible by being positioned in different horizontal lines and preferably not on the same vertical line. Inter didn’t do that. Even when the centre-backs or Valero could pass the ball between the lines, they rarely had any lay-off options to evade pressure and attack the goal by facing it. 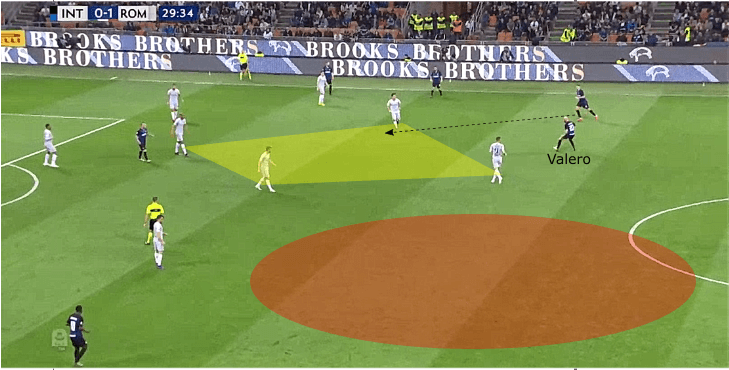 Naturally, Inter focused on the wings instead. However, due to the fact that Valero was the only player occupying the centre, the lack of connections to the centre was visible. Here, for instance, Valero had no passing options between the lines (yellow-marked space) because three players were occupying the wing.

Furthermore, Inter couldn’t switch quickly because no one was positioned in the far half-space. Even if one of the centre-backs moved in that space, the only passing option was usually on the wing. As a consequence, Inter rarely got between the lines and Roma had only to defend the crosses.

Isolations on the wing

As mentioned above, due to the problems of positioning in the centre, Inter focused more and more on the wing. However, they faced the same issues. Valero could rarely support on the wing; the number 10 was usually positioned in the centre instead of supporting in the half-space. Even when he was positioned correctly, the passing angles were poor and the fact that Inter circulated the ball slowly made it easy for Roma to stay compact.

This situation shows the issues perfectly. Valero received the ball from Asamoah but doesn’t have a passing option. If Džeko had participated in pressing, they could have pressed Valero with two players. Furthermore, the eventual passing lane to Perišić (marked red) is not ideal because the Croatian winger would receive the ball facing the touchline.

Besides the structural issues Inter faced, another reason for the problems regarding the lack of chances was the Roma defence. At the start, Ranieri’s side tried to close the centre with a 4-4-2. Focusing on the vertical compactness between each line made it hard for Inter to find space. The wingers of Roma tried to close the half-space in order to support the central midfielders. This left the flanks open, but Inter’s structural issues made it easy for Roma to close those spaces by shifting collectively to that side.

Due to the higher position of Vecino, Roma changed to a 4-1-4-1/4-5-1 in order to close the centre and the passing lanes into the half-spaces. Rarely did they use man-orientations, but the change of Ranieri allowed them to follow specific players in the centre.

One major disadvantage of the system was the fact that Valero had more space to act. Džeko was allowed to rest during the defensive phases, although he participated when Roma pressed higher. However, Valero rarely faced any pressure from the Bosnian striker. 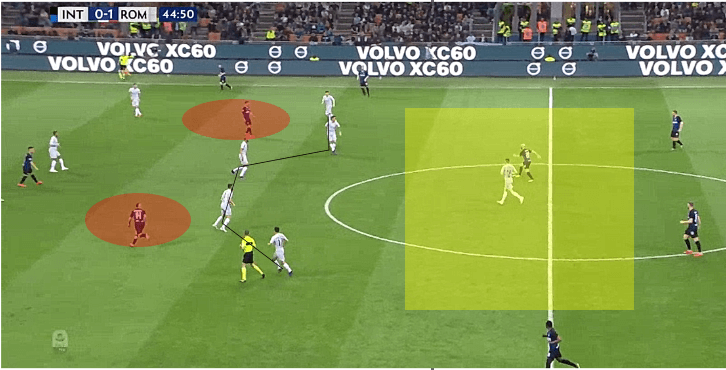 Although Roma closed the passing lanes to Nainggolan and Vecino, they couldn’t press Valero effectively anymore. Throughout the second half, they were pushed back. As a consequence, they were often positioned too deep which leads to problems when you have to defend crosses. The goal from Perišić was, therefore, the logical consequence of the deep Roma defence. 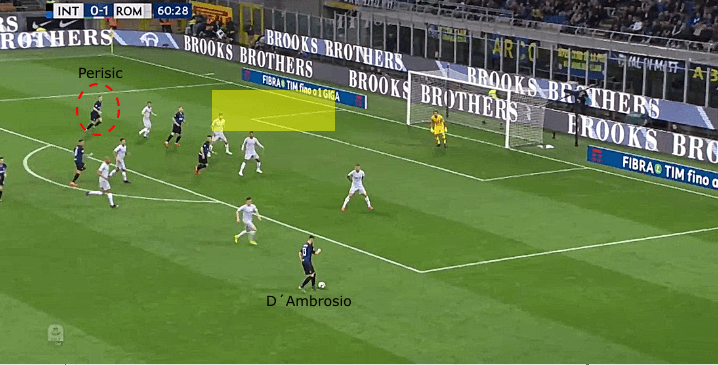 Due to Perišić’s height and athletic abilities, Inter had a qualitative superiority on the right side against Roma’s Florenzi. Therefore, the Croatian winger often attacked the space behind Florenzi.

Roma depend on Džeko in attack

Claudio Ranieri’s team had a simple attacking plan. When Inter pressed higher in their 4-4-2/4-2-4, Roma would simply choose the long ball and tried to find Džeko. The Bosnian striker had a great game because almost all long ball were secured by him. 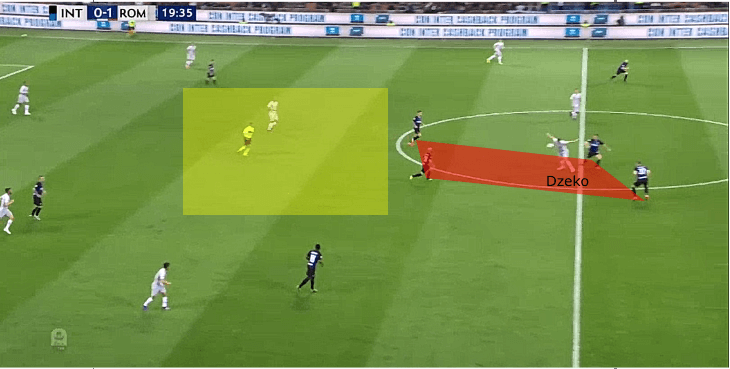 The advantage Džeko created for Roma was tremendous. Due to the fact that the pressing of Inter was not compact vertically, Ranieri’s team were capable of using the spaces behind the first line of pressure. When Džeko received the ball like in the image above, Inter’s midfielders and defenders had to pressure him leaving space behind them (marked in yellow). When the former Manchester City striker was capable of getting the ball to Cristante or N’Zonzi, Roma could advance easily and use the gaps behind the wingers. 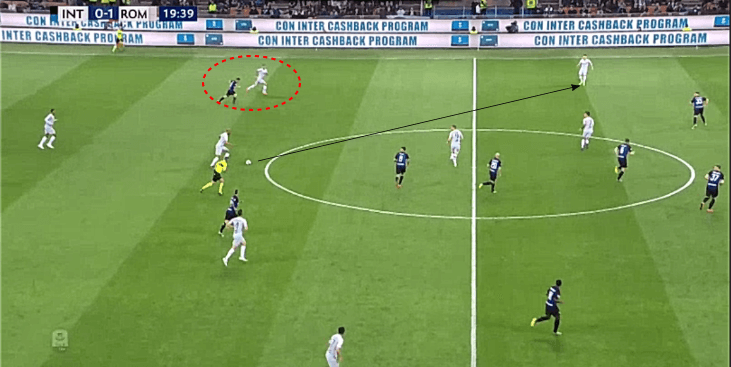 Here, Politano is positioned too deep while D’Ambrosio had to move into the centre due to De Vrij following Džeko. When El Shaarawy received the ball, the winger had space to exploit the holes by using his speed and dribbling skills. The goal scored by him was the perfect example of this tactical move by Roma.

In an intense game, Inter were the better side, dominating the game. However, Luciano Spalletti’s side struggled to create chances consistently. Watching Inter this season is sometimes hard, because it seems that the team has a lot to offer and there is untapped potential. The decision to include Radja Nainggolan as the number 10 can be seen critically. Furthermore, the attack could be more dangerous if they stuck to clearer positioning. If not, they will continue to have a hard time creating clear chances next season.

Roma, on the other hand, focused on being compact in the centre. This made sense, but they dropped too deep midway through the first half. That gave Inter more space and Roma lost control. If they had pressed higher more often, maybe there would have been a better chance for them to win the game. We’ll see who coaches Roma next season. Nevertheless, they have a talented squad.