With Fulham edging closer to the drop, interim head coach Scott Parker is keen to impress in the hopes of earning a more permanent position ahead of next season. Saturday’s fixture against Manchester City represented arguably his toughest challenge yet, with Pep Guardiola looking to lead his side back to top spot in the Premier League.

Despite some brave attempts to build attacks, Fulham were beaten by two goals to nil. This analysis will attempt to dissect City’s performance, as well as highlighting the flaws in the home team’s efforts.

Eager to prevent central progressions during their defensive phases, Parker set his side up in a 5-4-1 formation. However, centre-forward Ryan Babel often dropped off the front in an attempt to stifle Gundogan’s game. In these instances, Andre-Frank Zambo Anguisse played between the lines in a shape more closely resembling a 5-1-4. 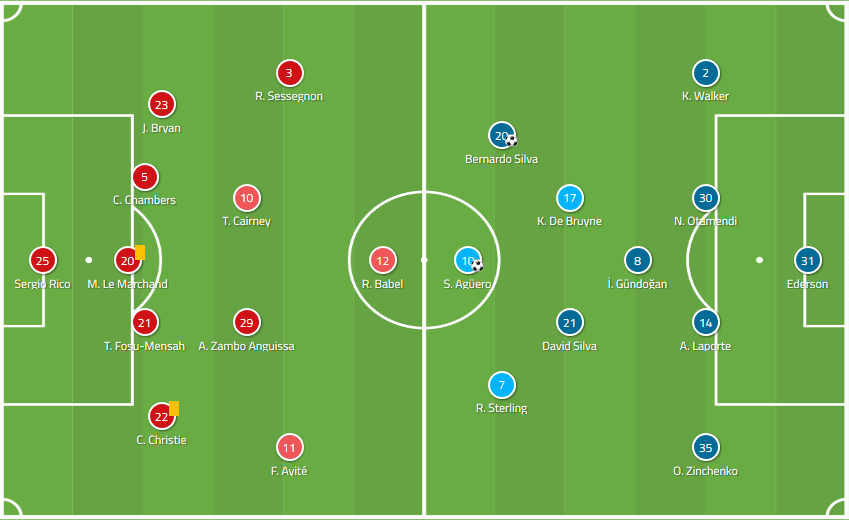 Guardiola went with his typical shape of 4-3-3, although he did alter City’s formation at different stages during the match. In order to better protect Ilkay Gundogan, Oleksandr Zinchenko eventually moved infield to form a double pivot in front of Kyle Walker, Nicolas Otamendi, and Aymeric Laporte. However, as we will see, the away side’s positional play was dynamic throughout.

With a return to the championship all but sealed, it seems Fulham are preparing for next season already. Despite the stellar nature of their opponents on Saturday, the Lillywhites elected for a patient approach to build-up, preferring to play short from goal kicks whenever possible.

Although it occasionally paid off, Fulham’s short passing game proved to be their undoing. Just five minutes in, right-sided centre-back Timothy Fosu-Mensah conceded possession in the first third, with his sloppy pass intercepted by the proactive defending of Kevin De Bruyne.

Illustrated in the sequence below, the Manchester United loanee attempts a pass into Tom Cairney. The midfielder fails to close the distance in response to De Bruyne’s positioning, and the pass is cut out with ease. 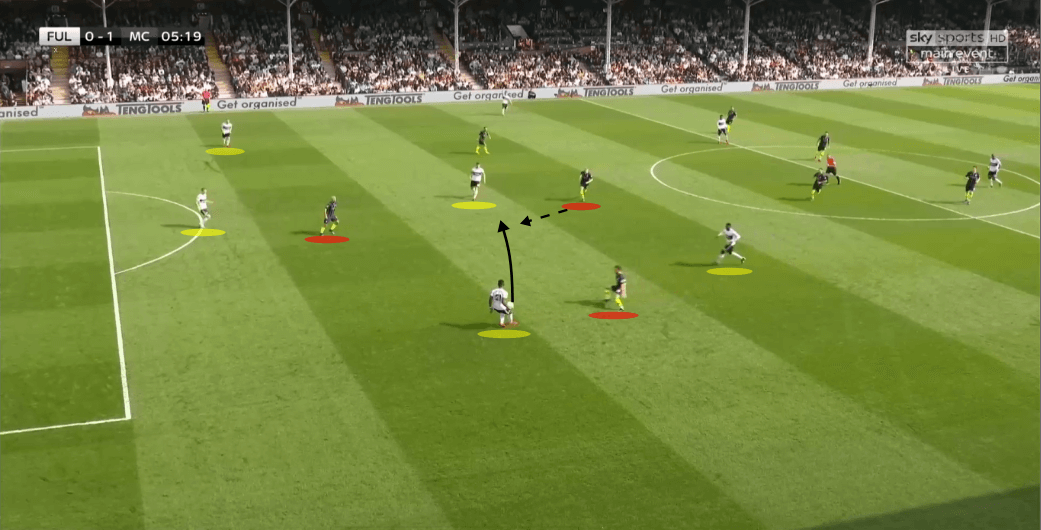 De Bruyne plays it first-time towards Aguero, who feeds the arriving Bernardo Silva in space. Fulham’s response is to get numbers back behind the ball, as opposed to counterpressing, given the large spacing during their build-up.

Despite Fulham managing to retreat and form a compact unit, Silva still finds a way through the crowd with a low strike from outside the penalty area. 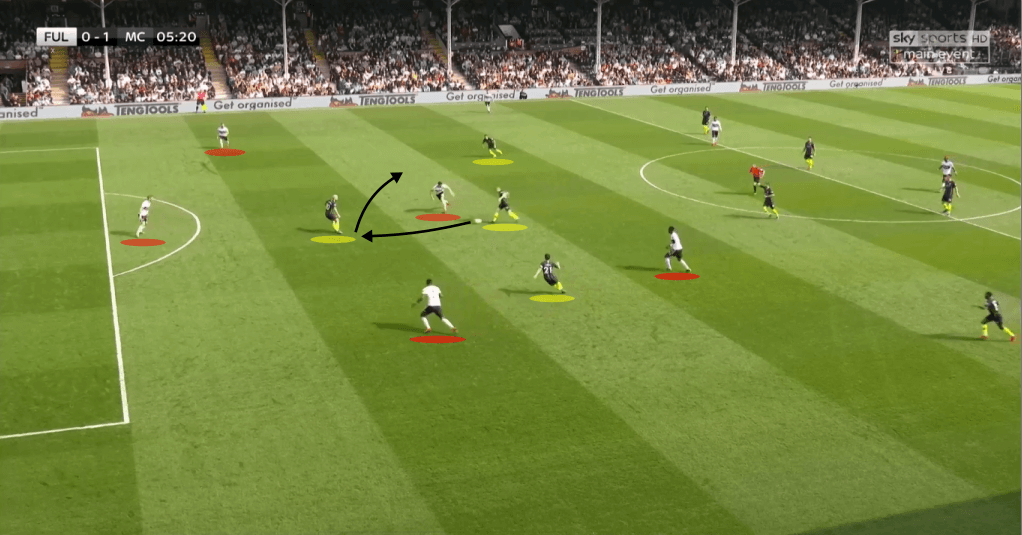 Just over 20 minutes later, City again capitalised on Fulham’s sloppy passing inside their own half. Despite having space to carry the ball forward, Cairney plays backwards to Joe Bryan, hoping to draw pressure with which to play through.

Silva responds to the cue by pressing Bryan from behind, before the former Bristol City left-back panics in possession. 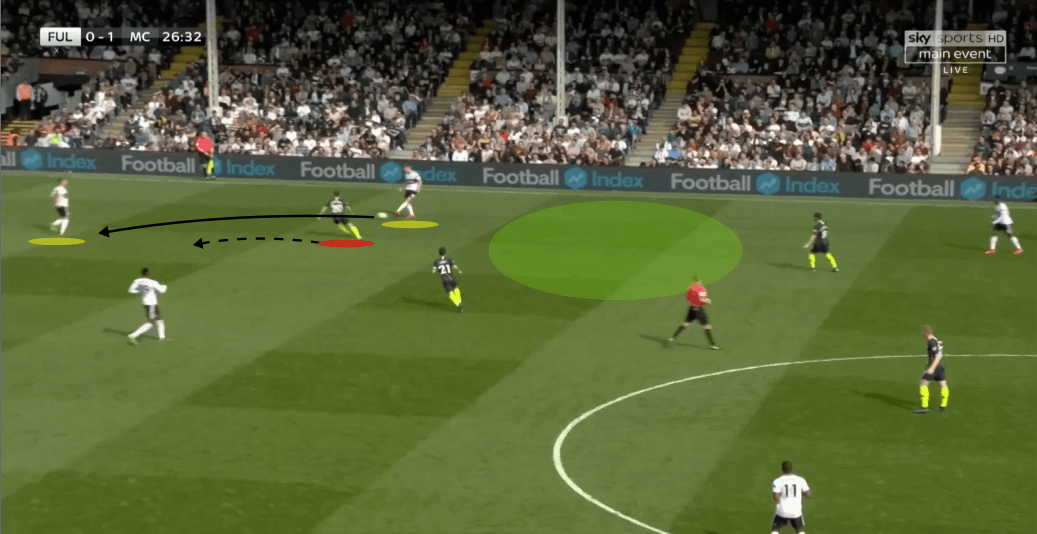 Failing in his efforts to play a simple ball to Chambers, Bryan misplaces and poorly weights the pass, allowing Silva to recover possession. The Portuguese international plays Aguero in, with the striker finishing calmly, giving Fulham a mountain to climb. 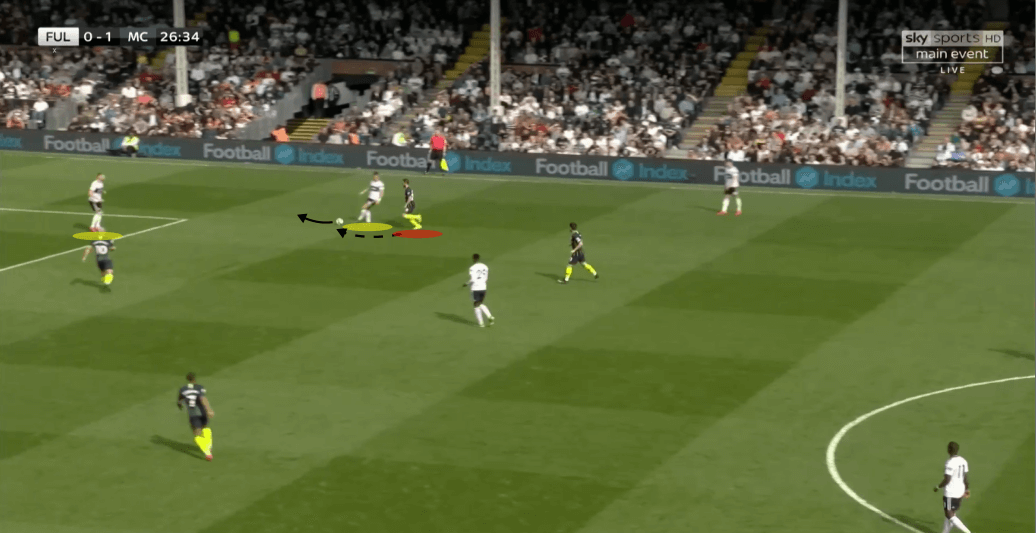 Throughout the 90 minutes, the home team persisted with a short build-up game. While it’s understandable to accept mistakes during the development of a possession-based approach, Fulham’s decision making was often notably poor in the first phase.

In the image below, Cairney again chooses to pass backwards. City had just lost the ball high up the pitch, with large numbers committed to the attack. Holding midfielder Gundogan finds himself deep into Fulham’s half, with Ryan Sessegnon making a run beyond him. Cairney turns right to play a pass towards Anguisse, ignoring the more advanced option to his left.

Choosing to play a quicker, more direct game during City’s moments of disorganisation might have provided more rewards. On this occasion, Cairney’s pass misses Anguisse and Fulham are forced into panic mode once more, eventually clearing the ball upfield. 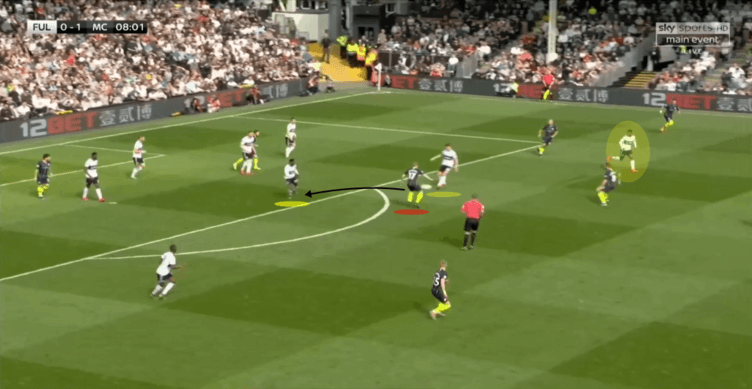 Often with sides who choose to build out from the back, the presence of a ‘spare man’ is essential. City sometimes chose to go man for man during Fulham’s build-up, attempting to force them long.

While keeper Sergio Rico did elect to play direct towards Babel on occasion, it rarely proved fruitful. With the knowledge that going in search of the second ball might not be of great benefit to them, Rico often decided to persist in playing short, even in situations where a spare man didn’t exist.

In the image below, City create a numerical advantage over their hosts. Anguisse, under pressure from behind by David Silva, tries to return a pass to Fosu-Mensah, but instead finds the touchline and gives away a corner. 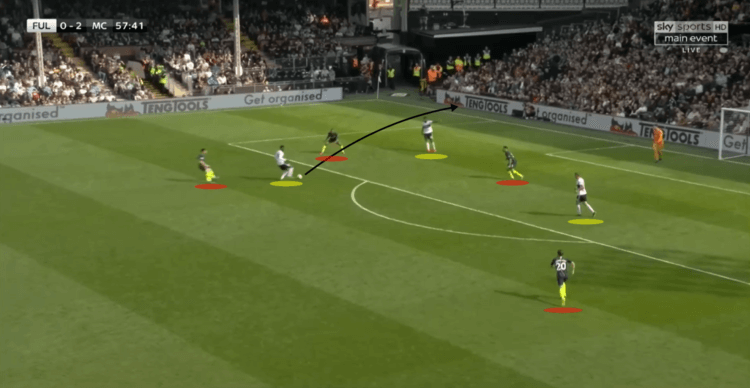 Overall, Fulham deserve some credit for their bravery during build-up play. With time, mistakes in positional play, receiving angles and passing selection are sure to be ironed out. However, many basic principles were lacking in their attempts, and so lots of work is clearly needed.

With Fulham defending deep and in large numbers, Man City needed to use intelligent movement and positioning to create openings. With that said, they didn’t have to try too hard, and managed to manipulate the home side’s shape on countless occasions.

As mentioned earlier, City moved from a 2-3 and a 3-2 as the first lines of the attack at different stages of the game. Ahead of the defensive five, Aguero, De Bruyne, Sterling, and the two Silvas varied their positional play to occupy spaces within Fulham’s defensive unit.

One of City’s main objectives throughout was to create passing lanes through to the attackers in the space between the hosts’ defence and midfield lines. Gundogan was key to achieving this, often taking advantage of Babel’s marking to drag him away from different passing lanes.

The image below shows Cairney, Sessegnon and Babel preventing passes into the midfield. Additionally, centre-back Callum Chambers has followed De Bruyne, something he did regularly throughout. 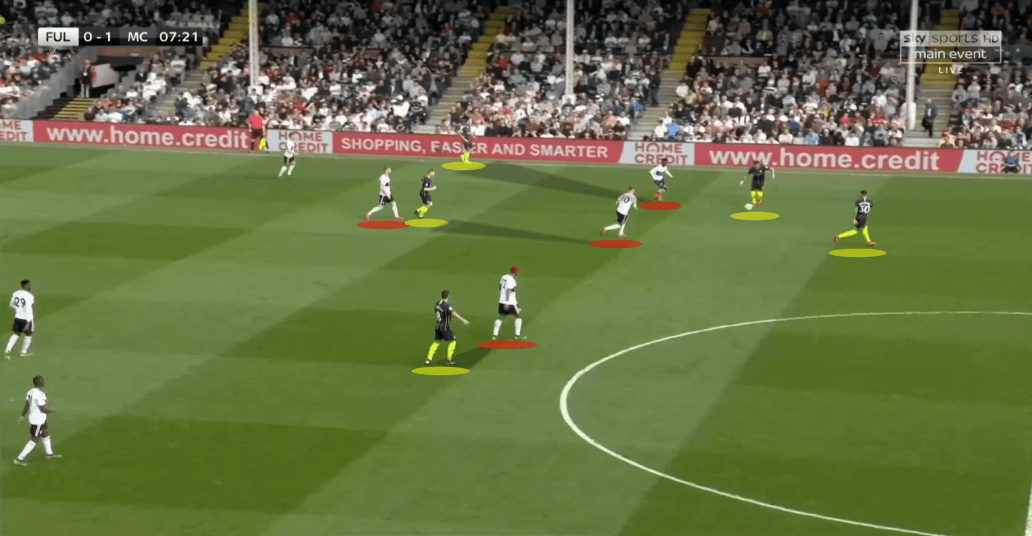 After instructing his defenders to play across the back-line, Gundogan positions himself so as to exploit Babel’s cover shadow by opening up the line of pass between Laporte and De Bruyne. Chambers has also retreated back into the defensive line with the ball on the other side of the pitch, meaning De Bruyne can receive between the lines unmarked. 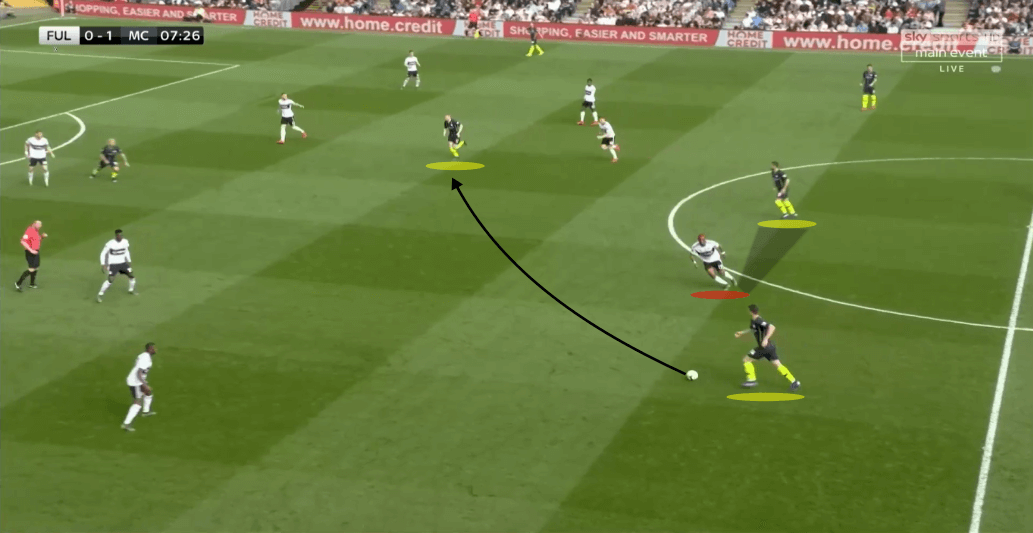 David Silva’s movement was also key in creating space between the lines for De Bruyne. Often, the Spaniard would engage a member of Fulham’s back three before dragging him out and creating a pocket of space for Laporte or Otamendi to play a direct pass. On other occasions, he would engage Anguisse before drawing him out of the 10 space and allowing De Bruyne to receive. The image below highlights this.

He fakes interest in receiving the ball by dropping deeper, but his real intention is to open up a pocket behind Anguisse for De Bruyne to take on possession directly from Laporte. The Belgian playmaker again receives unmarked, before linking up with Aguero and Sterling. 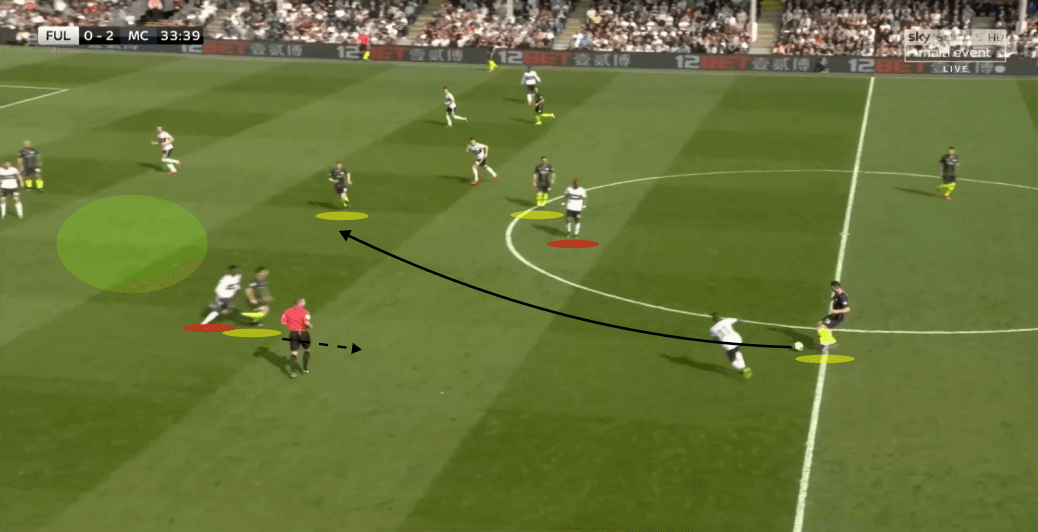 Another way in which City looked to progress through the centre involved overloading the left side of the pitch, before playing through the congested space with one and two-touch passing.

In the instance below, De Bruyne has dropped into the deep left half-space, with Silva playing in the number 10 role and Aguero swapping positions with Sterling. De Bruyne feeds Aguero, who plays a first-time pass towards Silva. The former Valencia man slips the ball in behind for Sterling to run onto, before Fosu-Mensah gets back and times his challenge well to prevent a third goal. 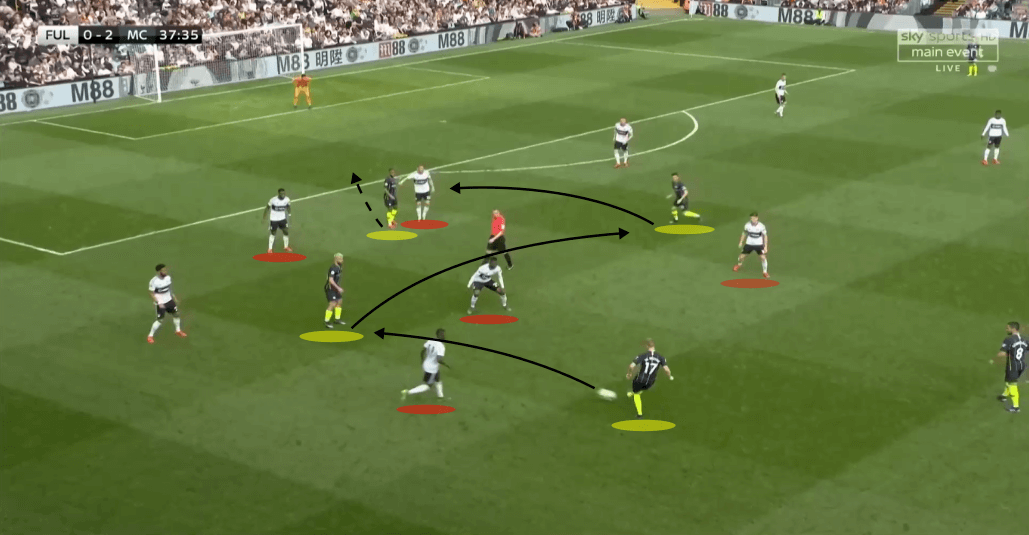 Again looking to play quickly through tight spaces, the example below shows Silva receiving in the advanced left half-space, thanks to an excellent penetrative pass from Laporte.

Silva turns at pace before playing a through ball between Cyrus Christie and Fosu-Mensah. Sterling is the one again to receive in behind, but fails to capitalise on this occasion. Notice also the positioning of Aguero in this image. The Argentinian frequently dropped off the front in an attempt to disjoint Fulham’s defensive line. 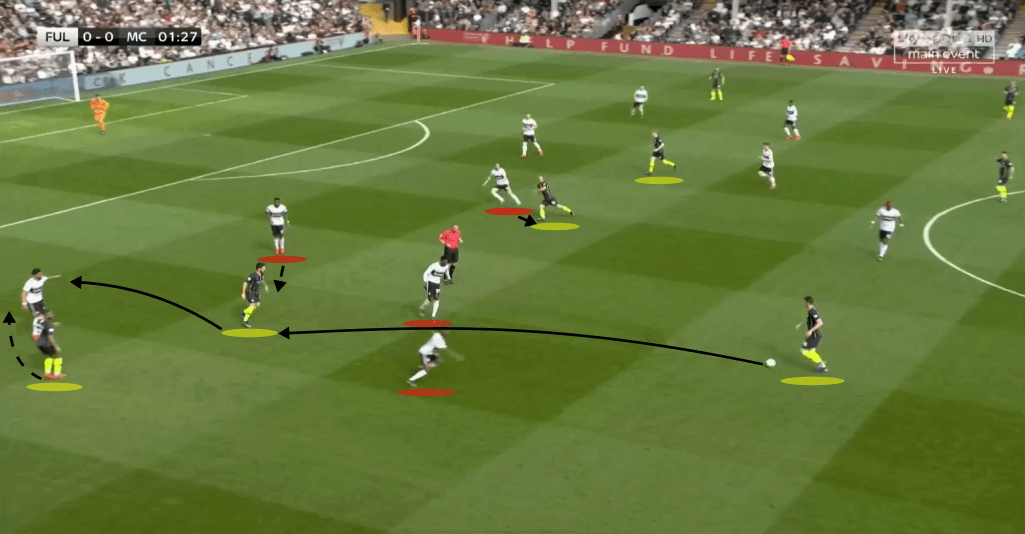 While the above examples show how Man City succeeded in playing quick, vertical passes to progress in central areas, they also used horizontal passing to break down their opponents.

Shifting the ball from side to side, they looked to create gaps through the middle to play through. Failing that, however, they would try to progress down the sides. Often, Bernardo Silva and Raheem Sterling found themselves in one-on-one scenarios with Fulham’s wing-backs, while the home side’s midfield focused on closing out the space centrally.

On the occasions where Christie and Bryan were able to get out to the wingers, Silva and Sterling would regularly look to play passes down the channel for the late runs of the attacking midfielders. The example below shows an instance where De Bruyne receives in the right channel behind Bryan. 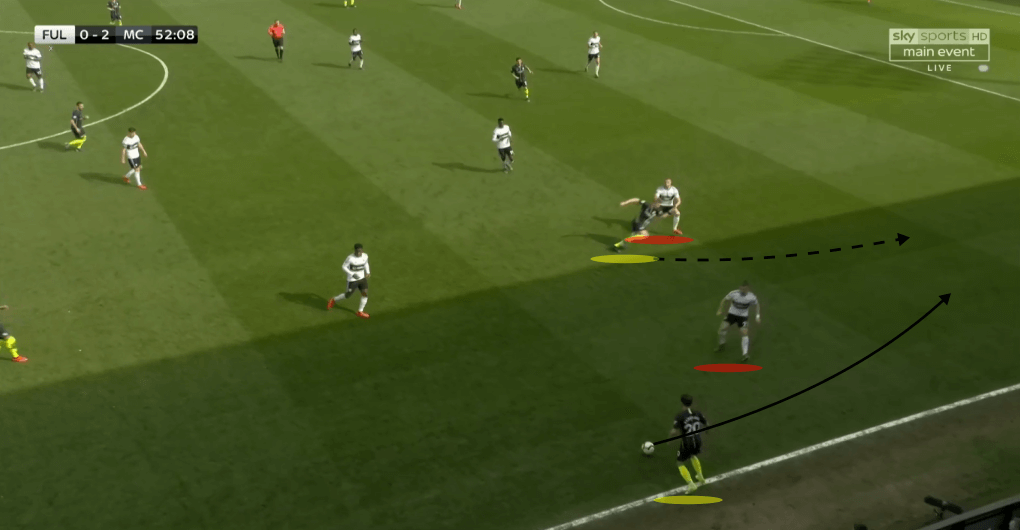 Overall, City managed to manipulate their opponents’ shape with relative ease, creating a large number of openings, and registering 24 shots on goal. They also managed to enjoy 65% of possession, with Fulham struggling to build sustainable attacks of their own.

Despite recording a comfortable win, City’s defensive issues did rear their heads from time to time. On the few occasions when Fulham managed to progress into their visitors half, the target area was clear.

As shown by the example below, Fulham more often than not chose to attack down City’s right. Perhaps identifying Kyle Walker as something of a weak link, they attempted a number of passes through the gap between the England right-back and Otamendi.

In the instance shown, Sessegnon makes a run between the pair, receiving in the box from Chambers. The youngster fires the ball across the face of goal, but Ederson is able to parry it clear. 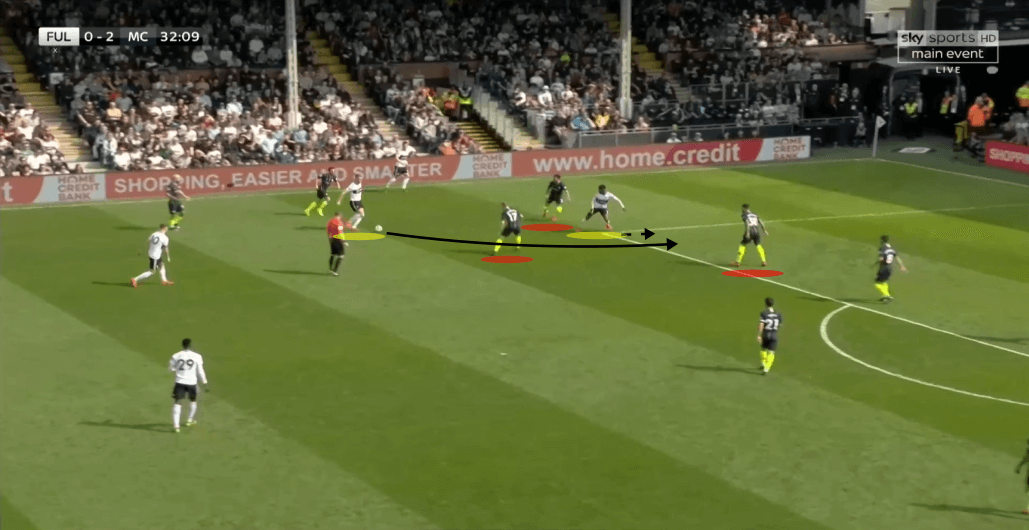 With Gundogan deputising for Fernandinho, Fulham also managed to exploit the German on the counter-attack. In the sequence below, Gundogan presses Cairney after Sterling has lost possession. His tackle fails, however, and the ball slips through for Floyd Ayite to break forward into space. 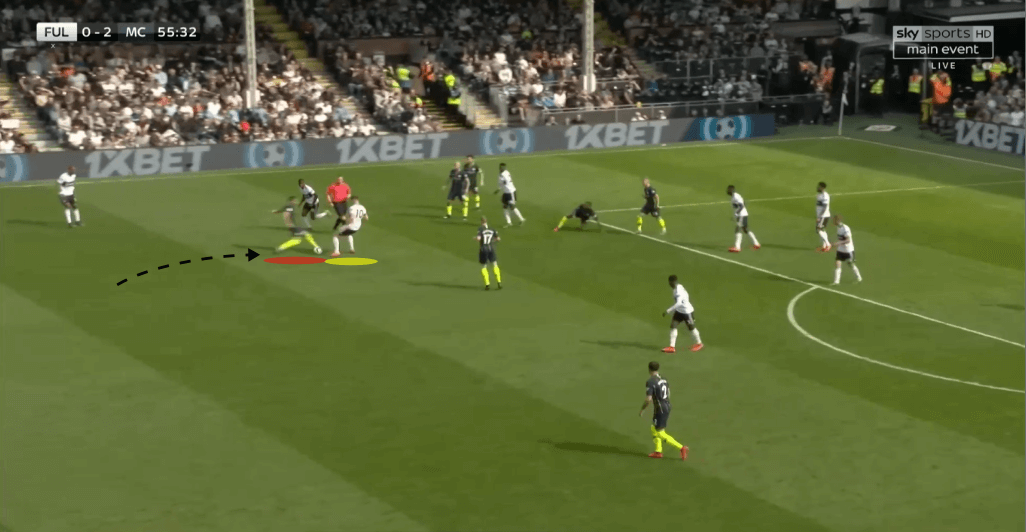 Leaving Gundogan in his tracks, Ayite is chased back by De Bruyne. The winger looks for the run of Sessegnon, again in behind Walker. Despite getting to the ball ahead of the right-back, Sessegnon fails to exploit the situation any further, with Walker recovering well on this occasion. 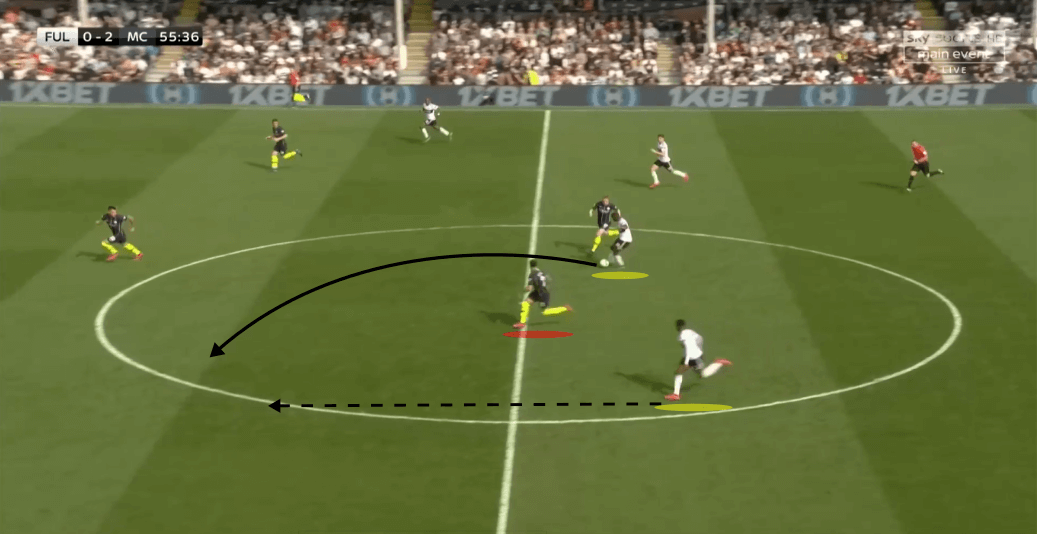 Fulham were unable to capitalise on Man City’s slight weaknesses, and only managed to take five shots on goal all game.

Thanks to a couple of sloppy mistakes during their build-up phase, Fulham handed Manchester City all three points. Despite continued intelligent attacking play, Guardiola’s men failed to add to their lead beyond the 27th minute.

The Sky Blues stay in second place, following Liverpool’s late win against Tottenham on Sunday. Fulham remain doomed to relegation, but Scott Parker’s bravery could be rewarded in time.