Tunisia succeeded in achieving a historic win at the Education City Stadium, Qatar, against the current World champions, France, in the third and last fixture of the group stage phase. However, this big win was not sufficient for the Tunisians in order to qualify to the knockout phase. And that’s because Australia won against Denmark to secure their qualification ticket alongside France. In fact, numerous results were surprising and unexpected in this group including Tunisia and Denmark’s draw, Tunisia’s loss against Australia, the latter’s win against Denmark and France’s loss to Tunisia.

Tunisia were unfortunate not to pass the group after a draw against Denmark and a win against France, but at the same time, they can only blame themselves for not getting points when they faced Australia. That one unconvincing performance complicated things for Tunisia and obliged them to depend on the other match’s result to qualify, and that’s why the outcome was frustrating for them despite beating the current World champions.

On the other side, it should be said that France underestimated the match and did not expect Tunisia to be able to disturb them or score goals. Head coach Didier Deschamps opted for resting numerous starting players in order to keep them fresh for the next round and to avoid unnecessary injuries as well. This was also the opportunity to give a chance to those who didn’t participate previously in order to convince their head coach and why not earn a starting spot in the knockout phase. But at the same time, the players chosen by Deschamps were not “second class” players, since they all play at big clubs such as Real Madrid, Liverpool, Manchester United and others.

Therefore, playing with such a team shouldn’t be an excuse for losing against Tunisia, especially when knowing that Deschamps made the needed substitutions during the second half by inserting PSG’s Kylian Mbappé, Atlético Madrid’s Antoine Griezmann, Barcelona’s Ousmane Dembélé, Juventus’ Adrien Rabiot and Arsenal’s William Saliba. France’s performance in this match was not convincing enough and it highlighted numerous weaknesses within the team, especially among the backup players.

In this tactical analysis article, we will shed light on Tunisia’s tactics and how they were able to reach France’s own penalty box numerous times and threaten their goal while remaining compact at the back for most parts of the match. It will also include an analysis of France’s errors against Tunisia and how the team didn’t find plenty of attacking solutions in addition to being fragile from a defensive perspective.

Head coach Jalal Qaderi started this match according to the 3-4-3 formation relying on  Aymen Dahmen as a goalkeeper, Yassine Meriah, Nader Ghandri and Montassar Talbi in defence, Bundesliga’s Ellyes Skhiri and Aïssa Laïdouni as central midfielders, Ali Maâloul and Wajdi Kechrida as wing-backs, Mohamed Ali Ben Romdhane and Anis Ben Slimane on both wings while Wahbi Khazri was the team’s striker.

On the other hand, France made nine changes for this match as they played according to the 4-3-3 formation using Steve Mandanda as a goalkeeper, Axel Disasi, Raphaël Varane, Ibrahima Konaté and Eduardo Camavinga in defence, Aurélien Tchouaméni, Youssouf Fofana and Jordan Veretout as central midfielders, Kingsley Coman and Mattéo Guendouzi as wingers and Randal Kolo Muani was the team’s striker instead of Olivier Giroud. 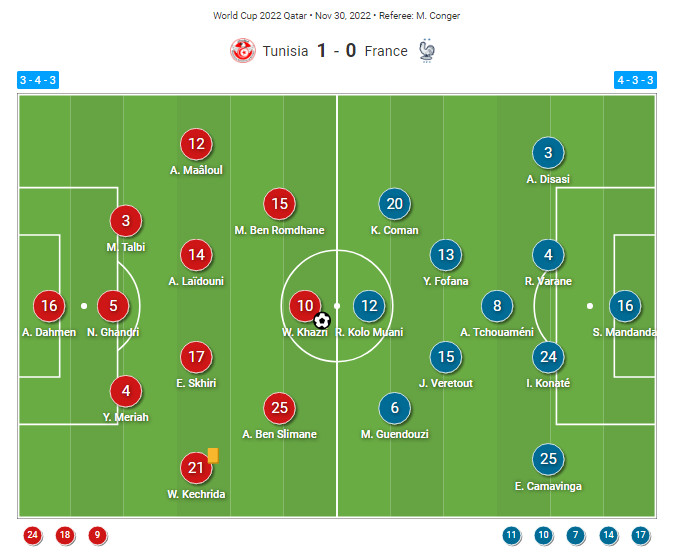 Tunisia were the more dangerous side in this match although France is a way more powerful team on paper. The team succeeded in making up for their bitter loss against Australia which cost them the qualification and were more organised both in defence and attack. Qaderi kept using the same 3-4-3 formation while relying on fresh and efficient wing-backs like Maâloul and Kechrida who contributed heavily to Tunisia’s win thanks to their consistent accelerations and attacking contributions.

At the same time, they were excellent from a defensive perspective as they limited both Coman and Guendouzi’s attempts. Moreover, Tunisia looked more aggressive on the ball throughout the first 60 minutes before retreating to contain France’s reaction after the goal and aim at relying on counter-attacks to win time and try to punish France with a second goal. In fact, the first few minutes gave Tunisia a confidence boost as they started the match very well and scored a goal that was later disallowed due to an offside position of Ghandri. The Tunisian centre-back moved very well without the ball inside the box when Khazri was about to execute the free-kick. And his marker Varane failed to mark him well and follow his movements. A bad marking mistake from Varane allowed Ghandri to meet the cross successfully and shoot the ball successfully. 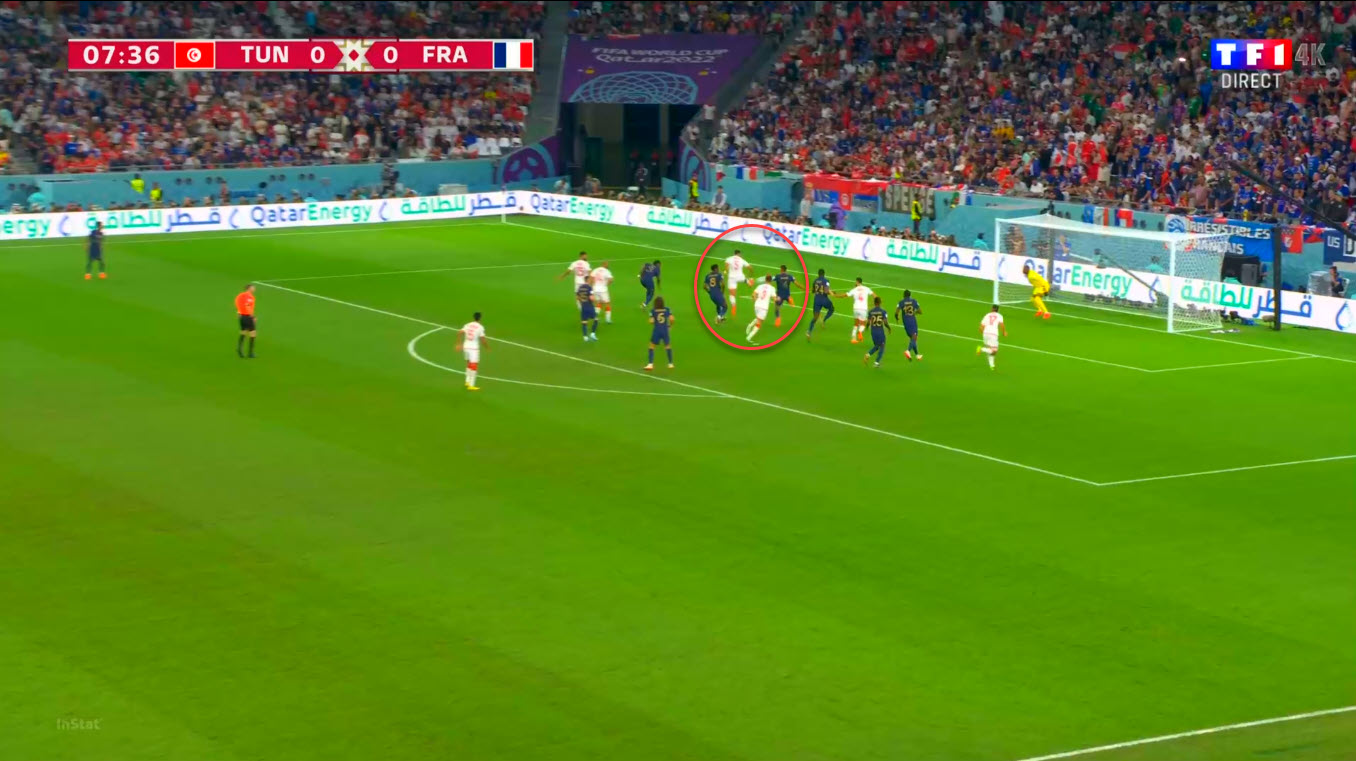 In fact, one of Tunisia’s efficient weapons in this match was set pieces since they created a lot of danger through these free-kicks and corner-kicks. And even when the danger was not created through crosses like in the previous example, both Khazri and Maâloul tried to surprise Mandanda with direct shots from corner-kicks and free-kicks but their attempts were not successful as they were either distant or saved by defenders.

Following this disallowed goal, Tunisia became even more dangerous as they applied high pressing on France’s defensive line which was lacking chemistry. The Tunisians took advantage of the slow French build-up and tried several times to intercept the ball from Konaté, Varane, Fofana, Tchouaméni and Camavinga. The team succeeded in making four high regains, eight counterpressing recoveries and one dangerous recovery. 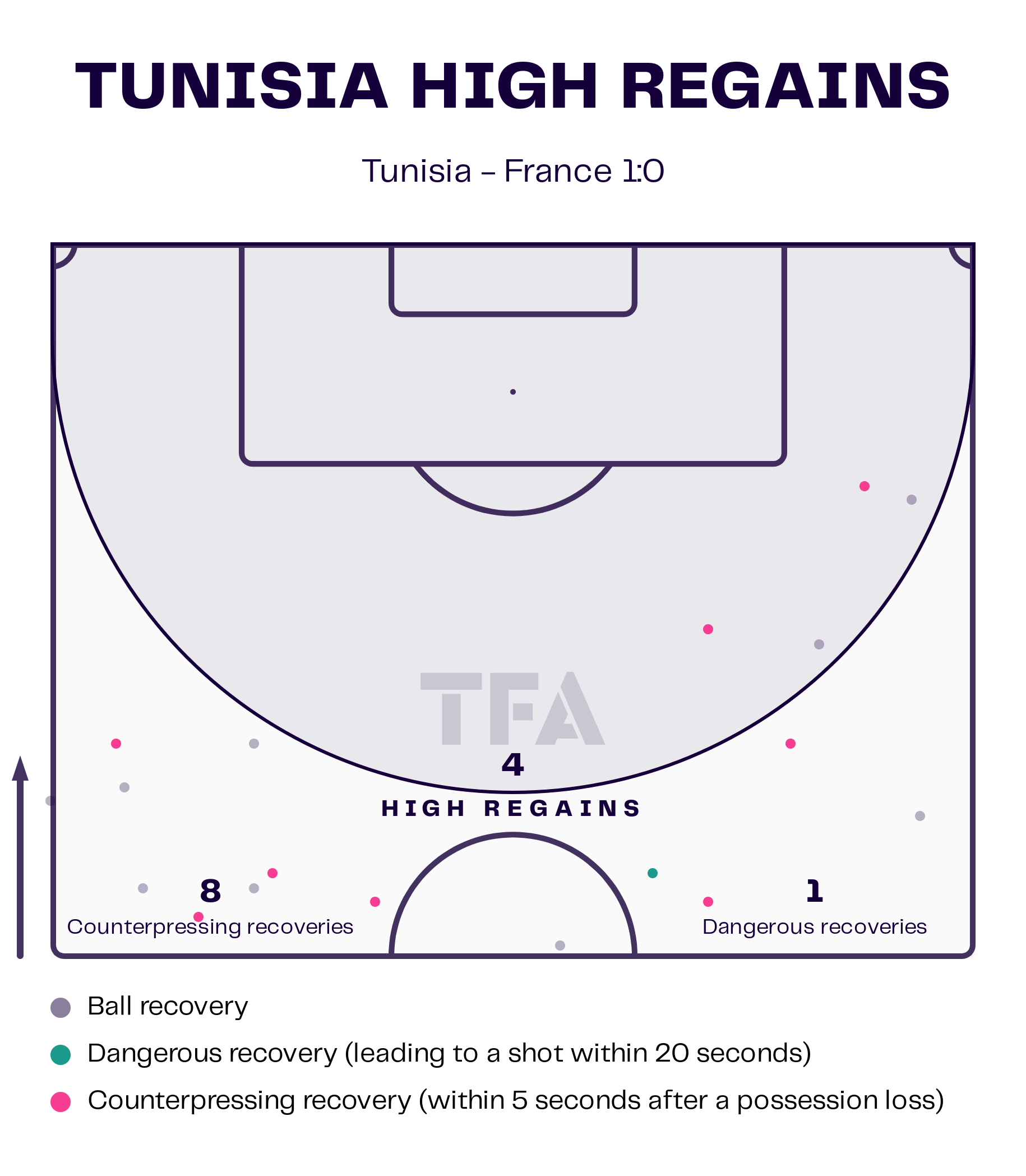 And that one dangerous recovery was exactly how they were able to start the first goal action knowing that prior to this goal, Tunisia created numerous chances including Khazri’s half volley from distance which disturbed Mandanda but didn’t go in and Laïdouni penetration inside the box and shot following Fofana’s fall. Concerning this goal action, it was Skhiri’s great pressing effort and intelligent tackle that created the whole counterattack. Skhiri saw Fofana’s slow movement with the ball and immediately went for a sliding tackle but without touching the French midfielder. He took away the ball from him and gave it to Laïdouni who provided it to Khazri. 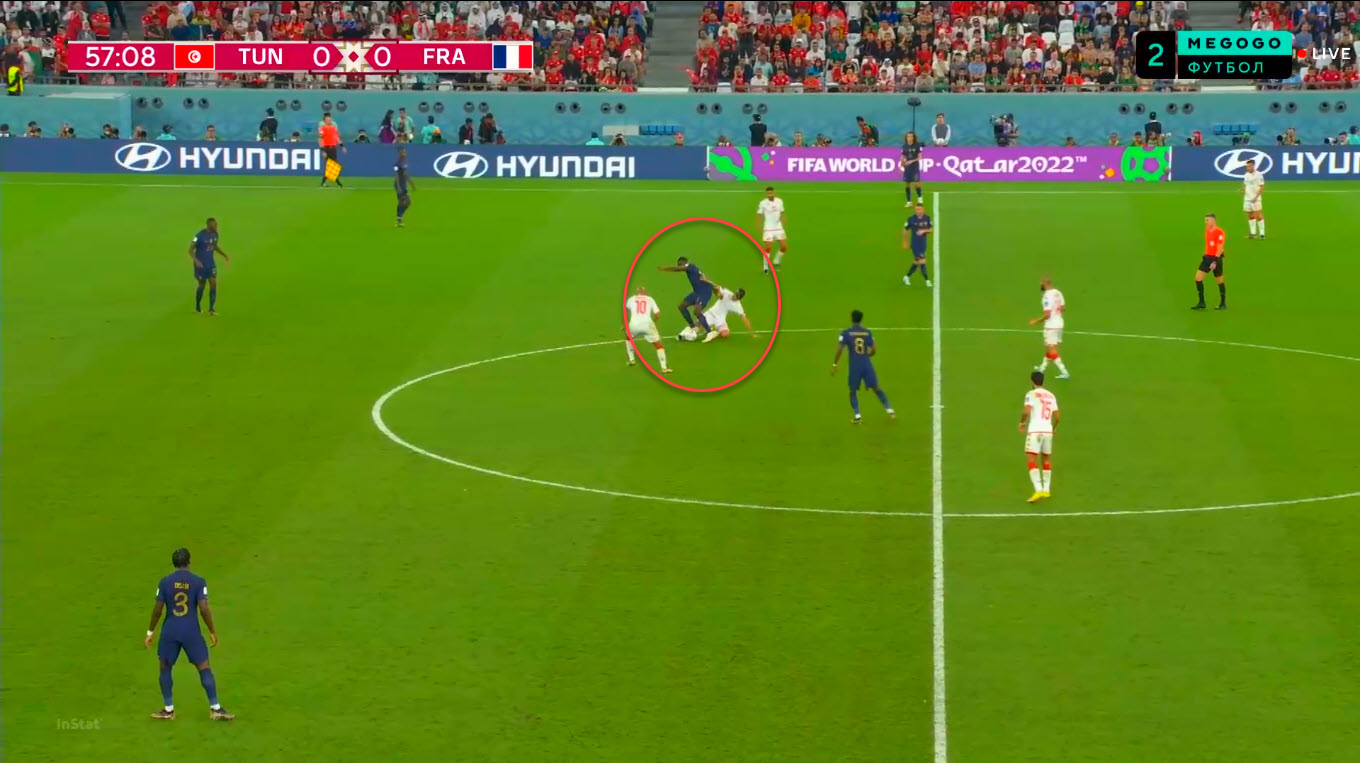 Montpellier’s Khazri had a lot of space in front of him so he decided to advance with the ball and when he reached the box and found Varane in front of him and Fofana trying to catch him from the back, he pretended to aim for the shot but went towards the left in order to get rid of Varane. Afterwards, he intelligently caressed the ball towards the opposite post with his left foot as soon as he saw Mandanda getting out and Disasi trying to tackle him before he shoots. But in the end, he succeeded in touching the ball before being tackled and he directed his shot with a perfect trajectory between Disasi, Mandanda and Konaté. 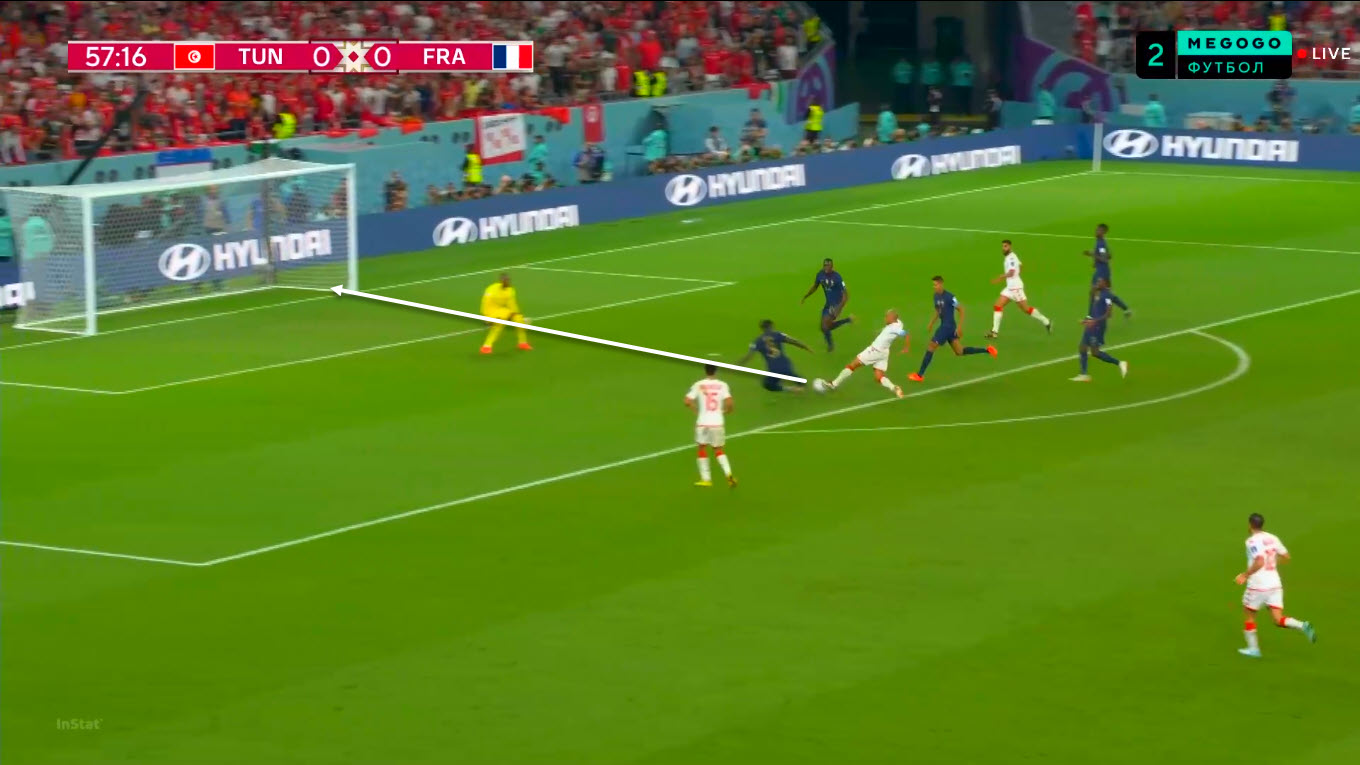 After scoring this goal, Tunisia failed to keep attacking with the same frequency and were obliged to retreat due to France’s attempted reaction especially following their super substitutions.

Tunisia conceded some dangerous occasions and could have conceded a goal during the last part of the match but Dahmen saved his goal on more than one occasion. Griezmann, Mbappé, Rabiot and Dembélé’s danger was partly limited. Yet, at least three of them were able to create a goalscoring action. Mbappé was stopped by Kechrida and Meriah who both covered for each other with the support of Skhiri at times and Ghandri at other times. Nevertheless, he was able to surpass Meriah inside the box on the following occasion using his skills before going for a shot from a closed angle, which was saved by Dahmen. 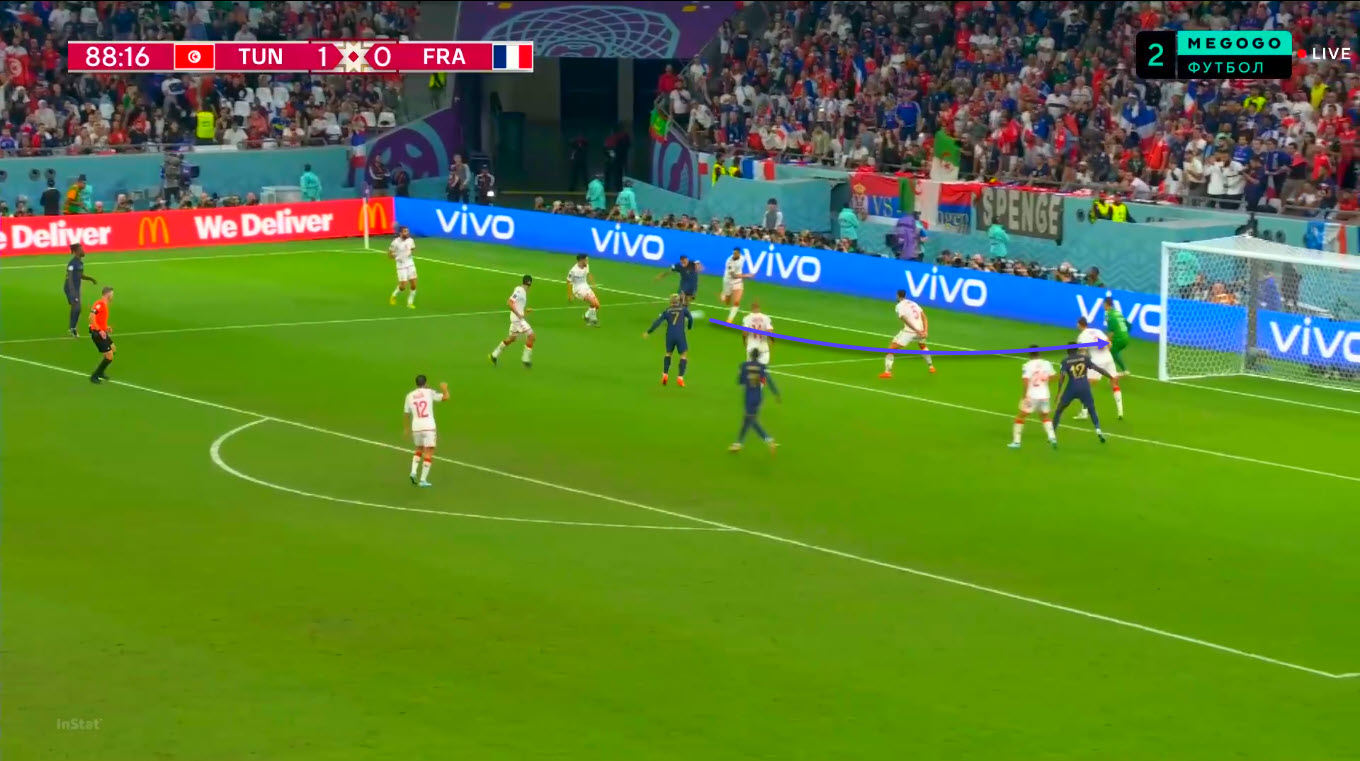 Also, Dembélé was able to create some threat on the right wing even though he was subbed too late. His most remarkable attempt was a powerful shot from the right wing which was deviated but not saved by Dahmen. This shot could have brought even more danger if an experienced striker like Giroud was playing because he would have been positioned well to finish the action following Dahmen’s deviation of the ball. 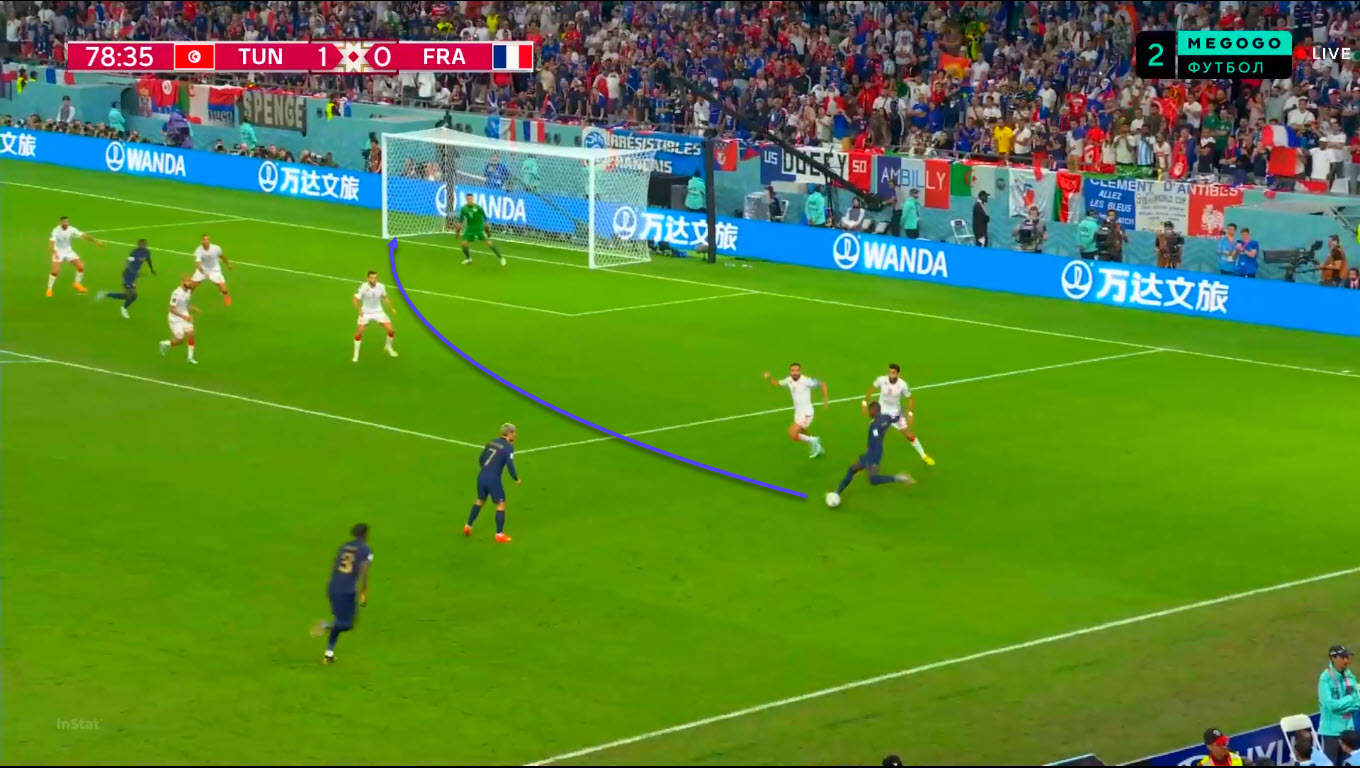 France were also able to score a goal that was disallowed due to Griezmann’s offside position at the moment of the cross. But overall, the team’s performance was disappointing and what was shown by the starting players was not convincing to anyone. The team lacked chemistry and failed to create well-structured attacks during the larger part of the match as they just relied on Coman’s speed and Kolo Muani’s movements but without real big opportunities. This confirms the fact that France will suffer if they lose one of their key attacking players going forward because they will not be able to replace him with the same efficiency/quality. From an attacking perspective, France were only able to win 38.46% of their offensive duels in this match and this proves Tunisia’s defensive superiority and France’s attacking issues.

This Tunisian win doesn’t really make up for not qualifying for the next round as it doesn’t justify not being able to make a positive result against Australia despite drawing to Denmark and winning France. Nevertheless, such a historic win lifts the players’ morale and makes them more aware of their abilities as such experiences will serve them a lot in the future.

But in the upcoming tournaments, Tunisia will have to give their 100% and be 100% ready from a psychological perspective against teams that look equal or weaker than them on paper in order to reach their targets. In other words, succeeding to put on a solid performance against bigger teams only doesn’t guarantee reaching the team’s targets and succeeding in qualifying especially if we are talking about group stages. And that’s exactly what happened to Tunisia during this tournament.

For France, Deschamps will have to revise numerous aspects in his defensive and attacking organisation as the team’s performance was not good enough, especially from a defensive perspective. The team conceded a lot of chances and looked fragile in terms of marking as well. In order to pass Poland and aim at reaching the final, France will have to be a lot more compact at the back and avoid conceding spaces to their opponents as they will need to start with a more attacking approach and impose their game, especially against teams which are not known for their attacking strength.