Ajax power past Feyenoord into the KNVB Beker Final

This year’s first semi-final of the KNVB Beker came between the teams who are currently second and third in the Eredivisie. The current holders of the competition Feyenoord hosted the competition’s most successful team with 18 titles to their name: Ajax. The visitors were favourites going into the tie as they are 13 points clear in the league of their counterparts but Giovanni van Bronckhorst was looking to cause a shock. Find out what developed in this tactical analysis. 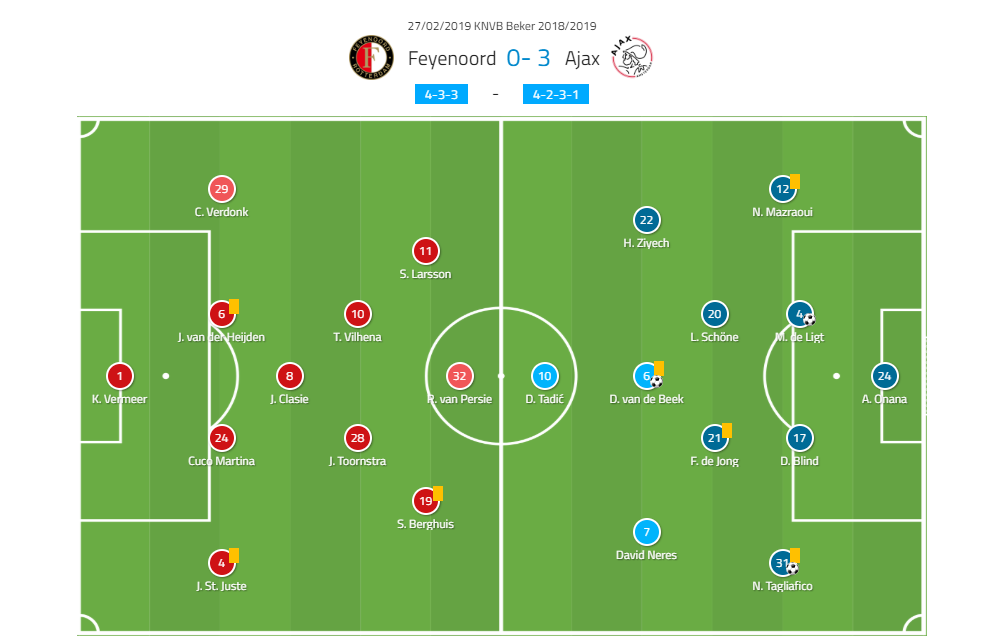 How did the sides set up?

From the start, Ajax played with a high press. What was interesting with the Ajax press was that they decided to mark man for man even when the ball was behind them, which you can see in the below image. This has an advantage as Feyenoord had fewer passing options available to play. This led to Feyenoord often having to play long balls to clear possession. Therefore, Ajax won back possession a lot more easily.

However, this also had its disadvantages, as Ajax had fewer players behind the ball. The problem with this was there were sometimes gaps in the Ajax press for Feyenoord to play through. In the below example, the ball is switched to Calvin Verdonk, and when the ball reaches him Vilhena has found a pocket available in the Ajax midfield. Verdonk chose to set the ball backwards, but a player of higher quality might have picked out Vilhena which could have caused trouble for Ajax.

Feyenoord may have lost the game 3-0, but their performance looked worthy of a better result whilst defending from open play. Ajax had 1.63 expected goals, nearly half of what they scored. That was due to Feyenoord’s excellent shape and compactness, and it was only poor aerial ability which led to two of the goals, which we will touch on later.

Feyenoord sat back in this fixture and did not look to press in the Ajax half. This prevented Ajax from playing through the middle of Feyenoord as well as stopping Ajax getting in behind them. Ziyech had a few good chances from outside the penalty area, with one hitting the post. But other than this Ajax struggled to challenge the Feyenoord goalkeeper, Kenneth Vermeer.

However, when Feyenoord did win possession back they were fast on the counter-attack which led them to producing some really good chances, leading to an expected goals of 0.75 despite only having two shots on target. In the below image, we see Van Persie receiving the ball on the counter-attack and picking out Sam Larsson who finds himself one-on-one with André Onana before hitting the post.

Gaps like these were common throughout the game and Ajax were lucky to come out unpunished. On another day Feyenoord could have possibly scored more than one goal from these situations.

Again below, this time we see Van Persie running into a gap in the Ajax back four. A better ball from Larsson and Van Persie could have converted this. If you look at the timings of both scenarios, if Feyenoord converted both chances, they would have been two ahead in the first 16 minutes of the match.

Whilst watching the game, it was easy to see why De Jong will be going to Barcelona this summer. His passing and awareness was fantastic and he completed 64 passes out of his 70 throughout the game (91%.) He uses his knowledge of the game in order to find such staggering accuracy.

In the below image you can see that he has found himself space and a passing line in between the Feyenoord players, but he is also looking for his next option. He glances with his shoulder and he can see Ziyech on the right wing.

The other big name for Ajax, De Ligt, was also very impressive with his passing in the game, managing a 94% pass success rate. What was most impressive about this was his range of passing which you can see from his pass map below.

He showed the ability to use both feet and switch the play as he could pass the ball in either direction. Additionally, he could also hit long balls into the Feyenoord box but also short passes around the Ajax backline.

So how did Ajax score the goals?

For all the work that Feyenoord had done defending with compactness from in-play situations, they were poor at set pieces and aerial ability. Just before half time, Ajax got a corner and De Ligt is marked by Larsson at the edge of the penalty area.

However, De Ligt easily loses his marker and makes a run for the penalty spot with Nicolás Tagliafico making a pivot run which made space for the Dutch international. Six of De Ligt’s previous nine goals for Ajax have been headers, and he was certainly going to convert this free header to make that seven and give Ajax the lead.

Another corner led to Ajax doubling the lead. The corner was flicked on and was poorly dealt with by Feyenoord. They could only clear the ball as far as De Jong who headed the ball to Donny van de Beek.

Van der Beek then flicked the ball towards the penalty spot which led to poor communication between the Feyenoord defenders and the ball fell into the path to Tagliafico who tucked it away. Tagliafico had four attempted shots on goal in the match, more than any other player.

Then finally the third goal was a tough one for Feyenoord to concede. They showed great compactness, as they had shown from in-play situations all game. Ziyech had made a run across the Feyenoord defence, but could not pull the trigger.

Perhaps Feyenoord should have been more aggressive in this situation, but the chance fell to Van der Beek from a tight angle. Vermeer should have done better as the ball fell underneath the keeper and Ajax made the score 3-0.

So, for Ajax, they have a cup final to look forward to on the 5 May against either Willem II or AZ Alkmaar. This will bring a good atmosphere to the club as their next fixture is at the Bernabéu where they will try and turn around a 2-1 aggregate score against the European Champions Real Madrid. For Feyenoord, their next match falls against FC Emmen as they look to try and confirm a spot in the Europa League for next season.