Real Madrid hosted their eternal rivals Barcelona at the Santiago Bernabeu in a big mid-week Copa del Rey semi-final clash this Wednesday. After a relatively even first leg in the Catalan capital, Los Blancos were slight favourites to earn themselves a ticket to the grand final. But once again, Barcelona proved to be at home in Madrid and blew Solari’s boys out of the water and out of the competition with a 3-0 victory.

Still, the scoreboard is a bit misleading in this case as the hosts were the dominant side for the majority of the game but were extremely wasteful in front of goal. Add some Marc-Andre ter Stegen heroics to the mix and you have a recipe for disaster for Santiago Solari and his troops.

This tactical analysis will use statistics to dissect how Barcelona ‘out-Realed’ Real Madrid to advance to their sixth consecutive Copa del Rey final with a big chance to make it five trophies in a row for the cabinet. 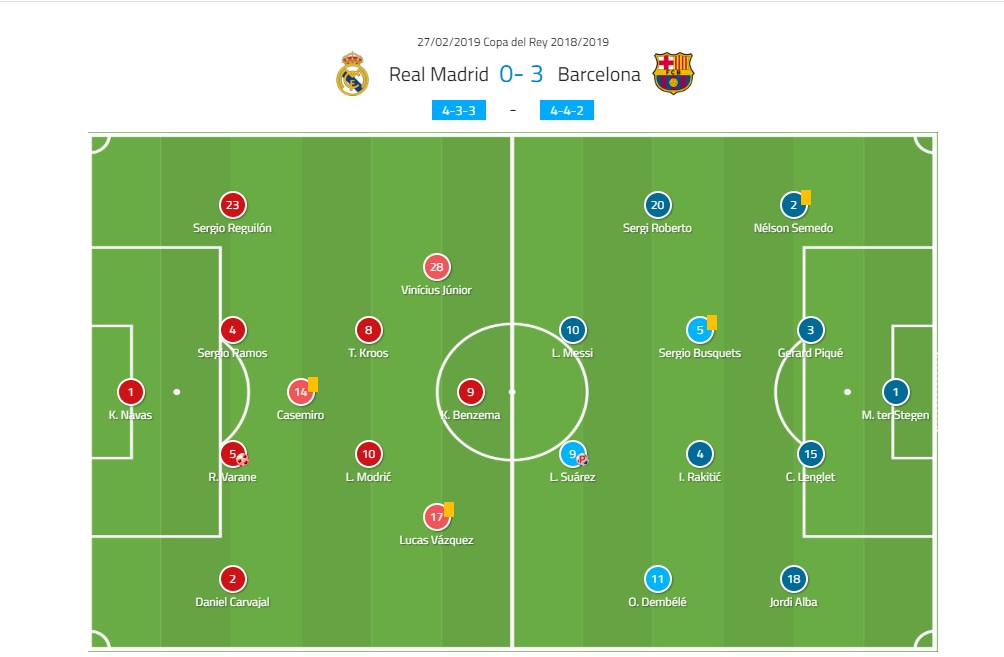 It’s not easy being Ernesto Valverde at this moment. The team is visibly exhausted and yet there is no time for rest as the conquest for the treble still continues. Although this was ‘just’ a Copa del Rey match, it was a Clasico first, Copa match second. Even the fact that it was a semi-final probably took a back seat on this one.

The Ant did not surprise with his lineup at all. In big games, Valverde likes to take a pragmatic approach, prioritising balance and control over aggressiveness and ferocity. For that reason, we saw the return of the Nelson Semedo-Sergi Roberto combination on the right, and the Jordi Alba–Ousmane Dembele axis on the left.

Up front, and in the rest of the positions, it was business as usual as Barcelona fielded their best XI to take on Real Madrid. The team, however, operated in a 4-4-2 system with Roberto and Dembele acting as wide midfielders rather than true wingers, but more on that a bit later.

Santiago Solari is still in search of his first El Clasico victory, and even though he seemed to have been really close this time, he will have to wait at least until Saturday to claim his first Catalan scalp. Being in the driving seat and in front of the home crowd, Los Blancos’ coach had everything in his hands but he still played the wrong cards.

Or maybe it wasn’t all that much down to Solari having the wrong hand, as his personnel choice was on point, but to some other circumstances that will be touched upon further in the analysis. Real Madrid fielded a strong lineup, not much different from last time these two teams met.

Sergio Reguilon benched Marcelo in the left-back position and Casemiro was back in the starting XI as the defensive midfielder for Real. The rest was as predicted with the front three consisting out of Vinicius, Karim Benzema and Lucas Vazquez, and Modrić and Kroos bossing the midfield.

The team in white operated in a 4-3-3 system throughout the game with no visible changes to the formation.

Even though the first leg Clasico ended in a 1-1 draw, it was difficult to get rid of that feeling that Real Madrid somehow got the better of Barcelona, regardless of what we saw on the scoreboard after 90 minutes at the Camp Nou. Funnily enough, the exact same thing happened this past Wednesday at the Santiago Bernabeu.

The home team were the clearly dominant side in the first 45 minutes. We could go as far as to say that they were clearly the better team in the whole match (or even the whole tie) but instead of going into the final, they were beaten heavily by their rivals.

Santiago Solari knew how to breach Barcelona’s defence, and there was only one key man for the job: Vinicius Junior. The 18-year-old Brazilian wunderkind is really growing into his new Real Madrid role, and even though he is far from the finished product, he already looks brilliant – and dangerous.

Vinicius won most of his duels with Nelson Semedo down that left flank. The Brazilian completed 85% of all his dribbles (11/13) and won an outstanding 68% of all of his offensive duels (13/19). He was a constant threat on the wing. More importantly, he made Barcelona react in terms of their lineup.

Ernesto Valverde knew that the Brazilian would be Real Madrid’s biggest weapon so he deployed Sergi Roberto in midfield to help Semedo deal with the speedy youngster. Even when they ganged up on him, he was still the most proactive player in white, registering a total of five shots, but luckily for Barcelona only one was on target.

Finding Vinicius wasn’t too difficult as all he needed was space and a good ball in behind the defence. As Barcelona traditionally set up their defensive line extremely high, it was not a problem for Kroos or Modrić to launch pass after pass to the flanks, catching their opponents off guard.

The German and the Brazilian interchanged 10 passes while he did the same thing with Modrić seven times throughout the game. But interestingly enough, neither was the most productive combination. Valverde had his defensive tandem in Roberto and Semedo but Solari had the exact same relationship in Reguilon and Vinicius.

The pair had 16 passes between themselves and would dance around Semedo and Roberto by swapping positions. Reguilon would promptly overlap while Vinicius would either go wide or tuck inside into his half-space.

Notice above how the play starts with Reguilon who stays wide and high on the field. There were two key movements here: the first was Vinicius dragging both Semedo and Pique into the box, and the second is Karim Benzema dropping deeper to receive the ball and create a new passing option.

With superiority on that side in Real Madrid’s favour, Barcelona couldn’t stop the combination in time. Benzema gets the ball in a dangerous area, unmarked. When the red and blue defence reacts and tries to collapse, suddenly Vinicius is the one completely free, and the Frenchman finds him with a simple touch.

But this was not the only instance when Real used the exact same formula to get the best of their rivals. Even in build-up, they would use the simple triangle system to get around their markers, just like in the image below.

Pique and Lenglet couldn’t follow Benzema that deep because Vinicius could sprint into the free space in seconds. With an extra man in midfield, Real would more often than not have the upper hand.

This numerical superiority was achieved for multiple reasons. The first would be the wide positioning of Sergi Roberto, who was placed there either in an attempt to give some width to the right side, which failed promptly (we will come to that shortly) or to block the overlapping Reguilon. Either way, it left Ivan Rakitić and Sergio Busquets alone against Luka Modrić, Toni Kroos, Carvajal and occasionally the fourth man in the form of Benzema.

Barcelona had a tough time finding people between the lines because the midfield was extremely congested, as can be seen in the image below. Notice how Real press heavily, and usually in a 4-1-4-1 formation that translates into a 4-4-2 or a 5-3-2 when welcoming the Catalans into their own half.

Barcelona looked lost and completely unthreatening during those first 45 minutes. Their problems were all too familiar though, so it was a bit surprising to see Valverde fall into the same trap once again.

Deploying Dembele on the left wing meant two things: the left would still be heavily prioritised attacking-wise with the Frenchman giving Barcelona that much-needed width down that lane, but it also meant that Jordi Alba would not be as effective since he would have a dominant player in front. The opposite flank would be deserted once again.

The pass map confirms this theory. Roberto and Semedo didn’t really give much in terms of the attacking outlets while Dembele’s presence limited Alba’s progression, leaving him somewhat inactive by his standards. This meant that Madrid could solve all of their problems just by putting numbers in midfield and stretching their back line, which is exactly what they did.

An extremely wide block of five defenders meant that penetrating from the wings was easier said than done as Caravajal would stick to Dembele like gum to a shoe. For those reasons, Lionel Messi had to once again drop to midfield, assume his position a lot deeper, often between Rakitić and Busquets, and orchestrate himself.

For all their lack in width and pace, Barcelona managed to score two out of their three goals relying on exactly those characteristics and only one man: Ousmane Dembele. The Frenchman was able to make darting runs behind the defence, pulling both the full-back and one of the centre-backs, and creating space in the middle. A well-placed cross into the box found its target both times, and the goals followed suit.

The interesting thing is that Dembele did that on both sides; on the left for the first goal and on the right for the second. Both followed the same pattern but were executed with a different foot, as described below. 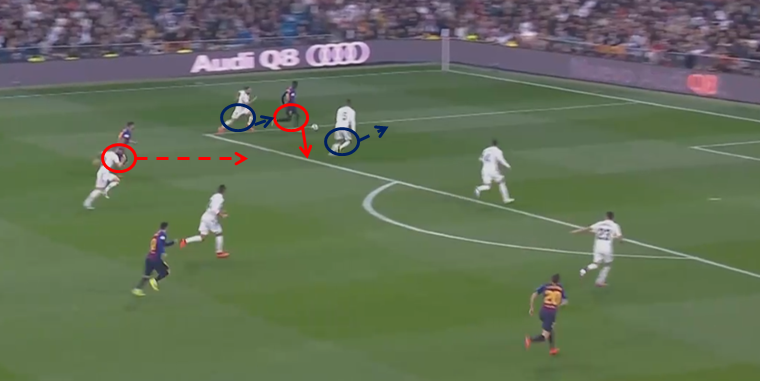 Still, Barcelona would probably not be in the final were it not for Marc-Andre ter Stegen and his two heroic stops to deny what looked like certain goals. The German has saved 47 of the last 55 shots on target he has faced which is a truly impressive stat.

Not only that but ter Stegen has become the first goalkeeper in history who managed to keep back-to-back clean sheets at the Bernabeu. When we combine that with some bad misses from Vinicius, the result may not be as surprising as it sounded at first.

It was yet another bad night at the Bernabeu for Real Madrid and another triumph for Barcelona. At this point, those results are becoming the norm. Barcelona have won five out the last seven times they visited the capital, and in the last five Clasicos, they have scored 14 goals while Real Madrid have only managed four.

This was the best possible way for Ernesto Valverde to celebrate his 100th appearance as the coach of Blaugrana but still, the performance of the team left much to be desired. Weathering the storm and then striking on the counter is not really the Barcelona way, but it was effective and got the Catalans into the final, and that’s all that matters, or should matter.

This 3-0 victory now joins the 6-2, 4-0, 3-1 and the rest of the big triumphs Barcelona have achieved over Real Madrid in recent years. Luckily (or unluckily) for Real, there is still one Clasico to be played. It will be the same stadium, same teams but a different venue. Barcelona get a chance to shut down Real Madrid’s dreams of a La Liga comeback this Saturday while Los Blancos will be hoping to cut the Catalans’ lead to six points.

Either way, the ride is not over yet, and both teams will have a point to prove in a couple of days’ time.