Chelsea host Nottingham Forest in the third round of the FA Cup having met at the same time in this competition last year. Nottingham Forest who are currently fourth in the EFL Championship have prioritised their league campaign with sights set on promotion.

Chelsea have won the FA Cup on eight occasions and were the firm favourites to win this one. This tactical analysis will break down this fixture, focusing on Chelsea’s overwhelmingly offensive tactics and Nottingham Forest’s mid-block. 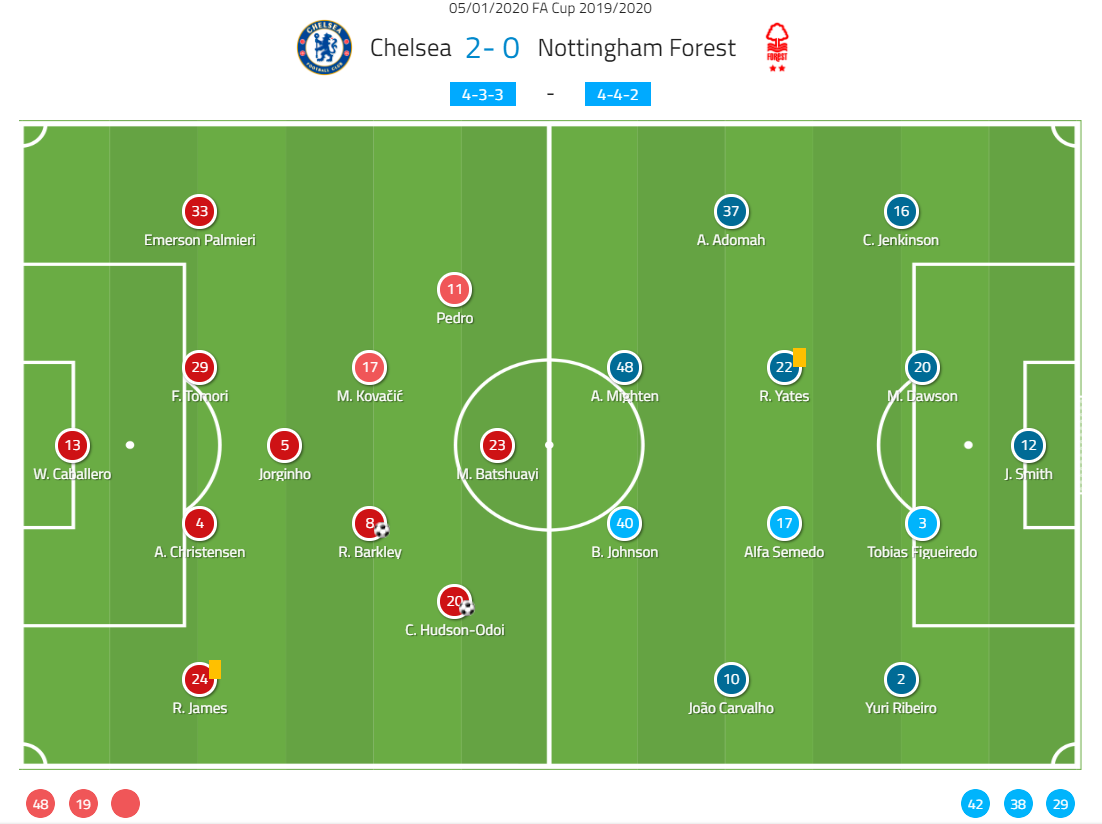 Chelsea make nine changes but maintain their premier league pedigree with Hudson-Odoi making his first start since Boxing Day. Pedro starts on the left wing ahead of Willian whilst Pulisic is dropped from the squad. Chelsea line up in a 4-3-3 with Batshuayi occupying the central area.

Lamouchi predicted a tough afternoon and made ten changes to the side that won 3-2 at home to Blackburn. Most notably, he granted a start to Alex Mighten who makes his first start for the club at the age of 17. Nottingham Forest set up in a 4-4-2 formation occupying a mid-block.

Nottingham Forest set up with a mid-block which doesn’t apply a press in the opposition half once possession has been lost. These tactics are a theme throughout the fixture with Chelsea being allowed time in possession outside of the final third. The result is that Chelsea have 78% possession in the first ten minutes

In possession, Chelsea are given space to play out from the back. Nottingham Forest’s front line drop to within their half allowing Christensen and Tomori to have time on the ball. The press begins once Chelsea cross the halfway line with Nottingham Forest occupying zonal positions. Success for Nottingham Forest depends on the discipline of their players to drop quickly within the transition and pick up positions to block the passing channels.

Chelsea beat the rigidity of Nottingham Forest’s defensive line by exploiting an opportunity where Joao Carvalho is caught too high up the field. The ball is switched to the wide-area where Hudson-Odoi picks the ball up. He isn’t closed down and relies on the fullback to shuffle across and close down the space. Hudson-Odoi uses his quick feet to turn inside and shoot. This forced the first goal and put Chelsea in the driving seat within the first ten minutes. Were Carvalho to have occupied a deeper position, he may have been able to influence play and apply more pressure on Hudson-Odoi before the shot could be made.

Lampard’s offensive tactics use wide areas to best effect with Hudson-Odoi the key player in that area. In the first half, he contributes to the offence by providing 74% of the attacks down his flank.

As shown, Hudson-Odoi uses the wide areas again to good effect. He is allowed space to move inside which he uses as he goes around Oliveira Ribeiro. He uses his momentum to shoot across the keeper. The parried ball is then turned in from Barkley for the second goal. Hudson-Odoi’s pace is used to good effect and his mind is made up by the lack of options in the box. His dominance in these areas continued into the second half after he’d moved onto the left flank. It was interesting to see Lampard using asymmetric tactics to use one flank over the other. At times, Hudson-Odoi looks more like an inside forward than a winger in a support role.

Hudson-Odoi was the key player on the offence but also contributed significantly to the defence. He was the most mobile player in the high press and slowed the play when Chelsea transitioned from offence to defence. As Nottingham Forest used counter-attacking tactics, this limited their ability to get out of their own half. As the graphic shows, Hudson-Odoi closed the space and blocked the passing channels. Without wanting to risk a cross-field pass, the ball is cleared and Chelsea turn the ball over again.

Hudson-Odoi uses his pace in the transition from defence to offence. Following a poor delivery from the corner, Caballero picks up the ball and releases it quickly into the winger’s path. Hudson-Odoi beats two defenders and passes the ball to Pedro in a dangerous area. His link play with Pedro was exceptional with both players being employed as inverted wingers on the counter-attack.

Nottingham Forest were outperformed for large swathes of the match with only one shot registered on target. Lamouchi will have been frustrated with two VAR decisions going against him but cannot disagree with the end result. On another day, Chelsea could have scored four or five without reply. Lampard set up with offence as a primary role for the midfield and gave offensive responsibilities to both James and Emerson. Due to the time that Chelsea had on the ball, they spent more time on the offence than they did in defence. Of both fullbacks, James was the most effective and delivered quality support play on the right flank.

As shown and with Hudson-Odoi in an advanced position, James pushes up behind to pick the ball up. He uses the space available and provides another option to cross the ball. From this area, he is now crossing from a more central area which gives Chelsea two options and two dangerous areas to service the box from. This was used to good effect with him offering up a position on the inside. This is contrary to a more traditional overlapping move from a wingback and is another offensive tool for Lampard to use. When possession is lost, the risk of committing James up the field is obvious. This was most evident in the first half in the build-up to Nottingham Forest’s disallowed penalty.

The ball is lost high up the field and both James and Emerson are out of position. Emerson is too far out of shot whilst James is still behind play. Were he five yards deeper, he would be able to cover Johnson’s run into the box. Christensen and Tomori commit to the two runners which creates space in the box for Johnson. The wrong pass is picked out on the right flank with Mighten in an offside position running away from the goal. With 30 yards still to run, a considered ball over the top or between the centre-halves would have put Johnson in for a one on one with the goalkeeper. This is a similar vulnerability that Liverpool have with both wingbacks committing forwards. Discipline in the offence would have prevented Nottingham Forest from breaching the Chelsea box at all.

Chelsea were the dominant force in this fixture and were predominantly on the offensive footing throughout. This tactical analysis concludes that Lampard’s asymmetric attacking play from the right flank in the first half was the most effective. The link-up play between Hudson-Odoi and James was exceptional and gave Chelsea options both inside and outside for both players. Now that Hudson-Odoi looks to be back to full fitness, he will be a significant attacking threat in the second half of the campaign.

Nottingham Forest were never set up to succeed in this fixture and failed to deliver much in the way of offence. Although Lamouchi was frustrated with the VAR decisions, he cannot argue with the result. Chelsea outmanoeuvred them in all areas of the pitch and were deserved winners of a place in the fourth round.