The Netherlands demolished Estonia 4-0 in Tallinn, following up on their impressive win over Germany in the Euro 2020 Qualifiers. Ronald Koeman’s side dispatched the home side with relative ease thanks to a brace from Ryan Babel, a goal from Memphis Depay on his 50th appearance for the Dutch national side, and a late header from Georginio Wijnaldum. Estonia struggled to deal with the Netherlands and were put to the sword as a result of their chaotic defending.

This tactical analysis aims to look at the tactics employed by both sides and the result. 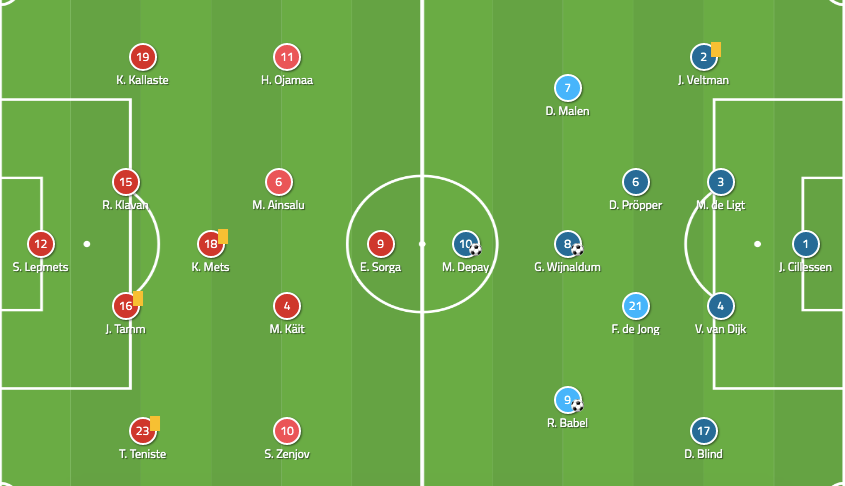 Estonia lined up in a 4-1-4-1 formation although it was more of a 5-4-1 out of possession. Captain Ragnar Klavan started in defence alongside Joonas Tamm. Erik Sorga led the attack with Henrik Ojamaa and Sergei Zenjov on the wings.

The Netherlands lined up in their familiar 4-2-3-1. The duo of Matthijs de Ligt and Virgil van Dijk started in defence. Frenkie de Jong and Davy Pröpper formed the double pivot in midfield. Youngster Donyell Malen was handed a start on the right-wing with Ryan Babel on the opposite flank. Depay led the attack.

Estonia, understanding the gulf in quality between the two sides, opted for a deep-block. The home side sought to crowd the midfield and have all their outfield players contribute defensively. As a result, although they lined up in a 4-1-4-1, this effectively became a 5-4-1 when Estonia conceded possession. Both the wingers were tasked with helping their defensive counterparts against the Dutch attacks from the wings. However, Estonia’s deep-block was rendered ineffective by the intelligent Dutch passing as well as some poor defending on the home side’s part.

While defending, Estonia were caught between two minds when it came to conceding space, especially in the wide areas. They were unclear as to whether to defend in a completely narrow manner or to pressurize the Dutch full-backs and wingers. This lack of certainty cost them as two of the goals came from crosses.

As depicted above, Estonia struggled to deal with any sort of width. Neither did they commit to defending narrowly nor did they attempt to close down the opposition players and prevent the crosses as a whole. The Netherlands attempted a massive 20 crosses and did the damage with the same.

The Netherlands break the lines

The Estonian defending was no match for the likes of De Ligt, Van Dijk and De Jong with their cross-field and line-breaking passes. In the initial stages, the Dutch struggled a bit to progress the ball into midfield. This was largely due to Pröpper dropping too deep and causing De Jong to become isolated. However, as the first half progressed, the Dutch relied on their centre-backs to find De Jong and Pröpper between the lines which was met with no resistance from the home side either. The Netherlands made 657 passes with a 91 percent passing accuracy. Apart from this Koeman’s side also played 32 long-balls.

Few teams in the world can boast a defensive pairing as talented as Van Dijk and De Ligt. The menacing duo were efficient at dealing with any Estonian threat, playing as sweepers and recycling possession. While playing a risky high defensive line, both defenders have the positional awareness and recovery pace to not get caught out.

In this game, it was their passing which made the difference. Netherlands’ third goal came from a magnificent pass over the Estonian defence by De Ligt. With Depay making a burst between the defenders, De Ligt floated a through-ball over the defence, rendering them helpless and Depay finished with aplomb. The sheer talent in this Dutch side all over the pitch bodes well for their future ambitions.

The attacking trio played by the Dutch caused Estonia problems due to its constant rotation and movement. Depay and Babel have developed strong chemistry with each other over the past year and this was seen as the former and latter would constantly swap positions. Babel seems equally comfortable playing centrally as Depay and this was evident when Depay would move to the left-wing and Babel would automatically, yet discretely, take his place as the striker. Malen had a comparatively quiet game but possesses the flair and technical ability to become an important outlet on the wings for the Dutch. Overall, Koeman has built a very fluid attack with Depay as its focal point and his consistent team-selection is paying off as the Netherlands play with good cohesion and understanding.

As this analysis has shown, the Netherlands were no match for a chaotic Estonia. The Dutch were barely challenged and dispatched the home side with ease. The Netherlands currently sit third in the table but have a game in hand over the top two in Germany and Northern Ireland. Koeman’s side has every chance of topping their group and making a spectacular return to the Euros in 2020 but need to keep maintain their form. Nevertheless, it was a strong performance from the Dutch.