Ahead of this match of the Euro 2020 Qualifiers between Finland and Italy, both teams were in the first and second positions respectively of group J. The team of Roberto Mancini had won all of their five games until then, while their opponents just lost the first game of this qualification against the Squadra Azzurra, and so were in second position.

In this tactical analysis, we will examine how Italy was able to defeat Finland 2-1 and look at both teams’ tactics.

Mancini lined his team up in a 4-3-3 and Gianluigi Donnarumma was their goalkeeper. The back-four was made up of Armando Izzo, Leonardo Bonucci, Francesco Acerbi and Emerson who got subbed off after eight minutes and Alessandro Florenzi came on for him.

Jorginho played in the middle in front of the back four and Nicolò Barella, as well as Stefano Sensi, supported him in the central midfield. Ciro Immobile was the single striker while Federico Chiesa and Lorenzo Pellegrini were the wingers.

Finland’s coach Markku Kanerva used a 5-4-1 formation. The back five in front of Lukáš Hrádecký was made up of Albin Granlund, Joona Toivio, Paulus Arajuuri, Sauli Väisänen and Jere Uronen.

Rasmus Schüller and Glen Kamara were the central midfielders while Robin Lod and Lassi Lappalainen played on the wing. The star of the team Teemu Pukki was the single striker.

Even though Florenzi was subbed on for the injured Emerson in the eighth minute, Italy’s structure during the build-up stayed the same during the whole game. Since the right-back Izzo is usually a centre-back, it was quite logical that he would stay deep to create a back three with Bonucci and Acerbi when they were in possession.

As a consequence, Florenzi pushed forward to occupy the space in the left wide area and so the left-winger Pellegrini shifted inside and joined Immobile in the centre most of the time. On the other side, Chiesa usually positioned wide and Barella occupied the right half-space as we will see later in this analysis. Jorginho was the deepest midfielder to support the back three during the first stage of the build-up and Sensi either tried to support Jorginho or position higher between the lines as Barella did.

On the other side, Finland stayed in their 5-4-1 formation with Pukki as the lone striker and behind him the four midfielders. Especially between the 30th minute and the half-time, the distance between the back five and the midfield players was too big and so Italy during this period were able to create several goalscoring opportunities and shots nine times.

When the distance between the lines was too big, the Squadra Azzurra tried to exploit this with passes exactly into this space. However, the second way to create goalscoring opportunities was through crossing. The right-winger Chiesa had especially tried to find Immobile and Pellegrini several times with crosses but it wasn’t easy since, due to Finland’s three centre-backs, Italy always had a numerical disadvantage. However, the Squadra Azzurra’s 1-0 resulted from a cross of Chiesa, and it was the only time when Finland’s centre-backs were positioned badly and how Immobile was able to score with a header.

Although Markku Kanerva’s team mostly sat back deeper and put pressure on their opponents about at the halfway line, they also used a higher pressing on some occasions. However, this higher pressing just paid off one time during this match. In the 70th minute, they once more put pressure on Mancini’s team higher up the pitch and were able to win the ball near Italy’s goal and Pukki dribbled into the penalty box where he got fouled and then the Norwich City striker converted the penalty kick to make it 1-1.

Kanerva’s team’s greatest problem in this match was that their single striker Pukki was usually almost all alone against the Italian defenders during Finland’s counterattacks, and so it was hard for him to get into a good position for a shot. Finland had just two counterattacks and none of them resulted in a shot. The image below shows a perfect example in which he’s alone versus four defenders and Kamara is the only one who is fast enough to support him.

Barella and Chiesa are 21 and 22 years old respectively but are already among the absolute best Italian players in their positions. In light of this, there was an expectation that Chiesa and Barella would cause havoc down the right-hand side.

The variability of Barella compared with Chiesa’s explosivity made it hard for the Finnish national team to defend against these two. Most of the time Barella positioned himself in the right half-space as already described. But since Fiorentina’s right-winger always stayed wide and high, and the right-back Izzo positioned deep, there was huge empty space on the right wing. Sometimes Inter’s central midfielder then positioned in exactly that space to provide a passing option for Izzo and Jorginho. 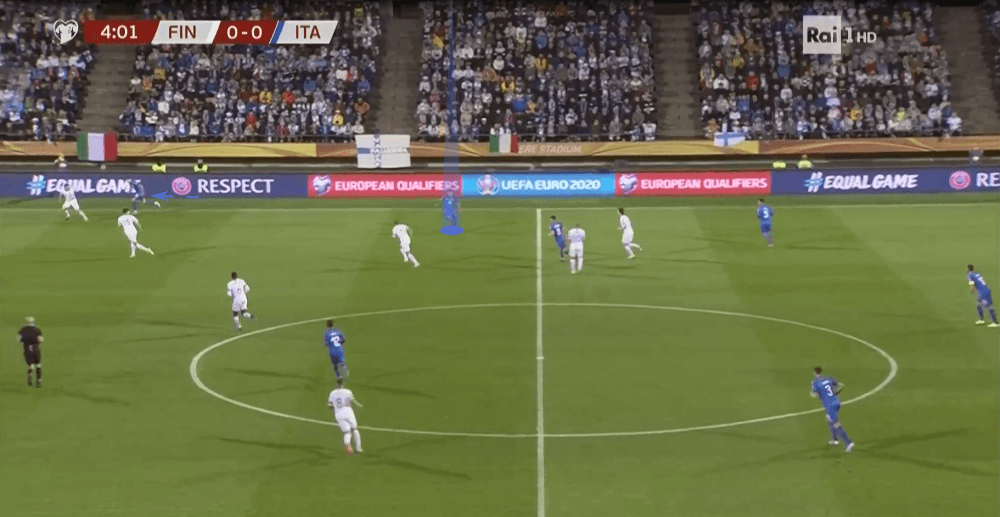 When he was positioned in the right half-space, in some situations he started a diagonal run into the centre. The opposing left-back Uronen then followed him which created space for Chiesa who stayed wide. In the image below, Acerbi detects this movement and spots how much space Chiesa has got on the wing and plays a long ball to the right-winger.

As we will see later in this analysis, Italy tried to press in early at the opposition. Even in these situations, the two young players harmonized perfectly together. Usually, Chiesa supported Immobile and Pellegrini in the first lane to put pressure on Finland’s defenders. However, as you can see in the image below, sometimes Barella pushed forward and Chiesa stayed a bit deeper, but this movement didn’t take place that often and we will look now at their usual defensive approach. 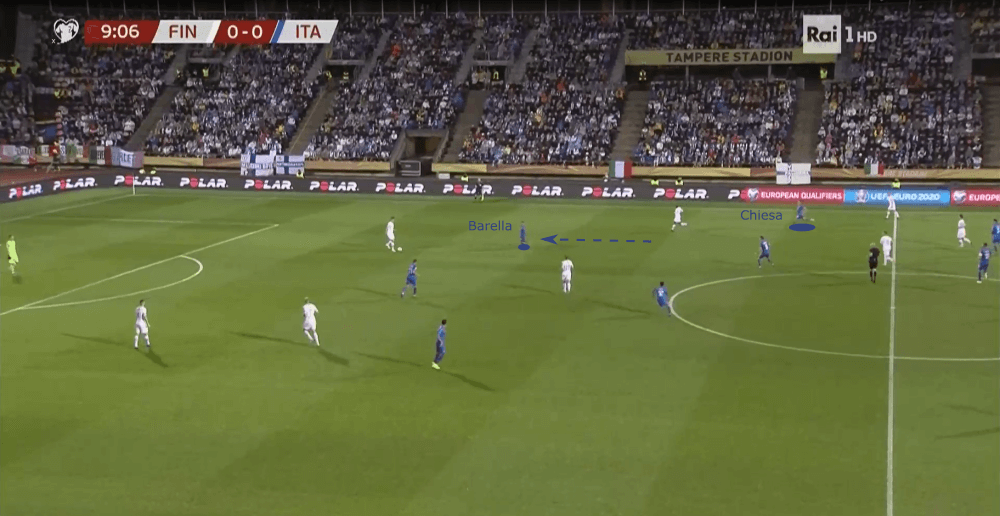 Most of the time, Mancini’s team used a high and aggressive pressing to avoid the chance that Finland would have a clear and structured build-up. Especially in the first half, they put pressure on the defenders as well as goalkeeper Hrádecký very high up the pitch.

Finland transformed into a 3-4-3 when they were in possession. The wingers tucked in to give the full-backs the option to push forward and so they also used a back three to build up their attacks. They tried to use short passes to circulate the ball and progress further up the pitch, but due to Italy’s pressing it mostly ended with a ball loss or a back pass to the goalkeeper who played a long ball.

Barella and Sensi marked the two central midfielders, Jorginho stayed a bit behind them and the three forwards put pressure on the back three. Florenzi and Izzo didn’t always push forward in these situations to mark the full-backs as shown in the image below, but the Finish players weren’t often able to exploit this. In the few instances they did, it was a trap as we will see in the following.

Florenzi, in particular, sprinted forward when his opponent on the wing received the ball. The right-back was then trapped since Pellegrini and Immobile cut off the back pass options and Sensi marked the central midfielder. So, Italy marked all players except the full-backs to provoke the pass to the players on the wing as already explained. As soon as they received the ball, the Squadra Azzurra’s full-back pushed forward to put pressure on him as you can see in the image below.

But especially at the end of the match when Mancini’s team were 1-0 and 2-1 in front respectively, they also sat back and defended extremely deep, and it was only Andrea Belotti, who came on for Immobile, who stayed up front. All other nine players defended their penalty box in front of Donnarumma. This defensive structure helped them in the final moments to avoid another goal by Finland and so got away with the 2-1 victory.

Italy performed well and their pressing especially was very effective. Finland really struggled to play out from the back and almost never had a structured build-up. Mancini’s team wasn’t very creative when it came to the creation of goalscoring chances since their two main concepts were passes between the lines and crosses. However, Finland was only in one instance really badly organised, and that was ahead of Immobile’s 1-0. The 2-1 was a penalty which also resulted from a cross.

Finland didn’t play bad but it was not enough to just rely on Pukki up front. In the end, both teams are still in the first two positions and it’s likely that they stay there since they faced each other twice, and now both just have to play against the weaker teams of the group J for the second time.