In the latest clash in Group A of the UEFA Euro Qualifiers, England and Kosovo, both unbeaten before the game, were looking to fight for a place in the next round.

The hosts came in as clear favourites and were initially surprised by an early Kosovo goal but managed to record a solid comeback in the first half sealing the game in their favour.

Despite the goal differential, Kosovo produced some interesting football that lacked the consistency to create danger for 90 minutes. England, meanwhile, proved their offensive potential but left plenty of doubts defensively.

In this tactical analysis, we go deep into the tactics and considerations that marked the attractive 5-3 victory of England over Kosovo. The local team left very well positioned to win the group while Kosovo will be fighting for second spot in their group game against the Czech Republic. 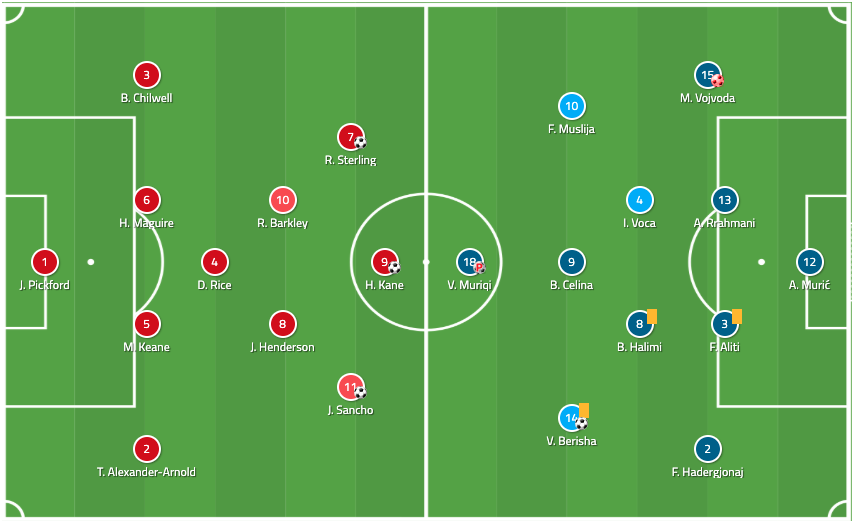 England started the game with a 4-3-3 with their wide men the main source of attack. England’s tactical positioning looked more like a 4-1-4-1 on several occasions, with Declan Rice as a sole defensive midfielder, a situation that was smartly exploited by Kosovo to create dangerous situations.

On the other side, Kosovo started with a 4-2-3-1 that also moved into a 4-1-4-1 or even a 3-4-2-1. Besar Halimi was constantly moving from his defensive midfielder position to a sweeper position between central defenders and even next to Bersant Celina as an offensive midfielder.

The effective but inconsistent high pressure of Kosovo

The analysis starts early as the opening goal came at the first minute of the game. After high and intense pressure, Kosovo forced a mistake by Michael Keane that gave away possession and let Valon Berisha to easily score against Jordan Pickford. See below how Kosovo started pressing at the beginning of the game. The focus of the pressing was the line of four at the back plus Rice, cutting England’s build-up in to two unconnected groups. 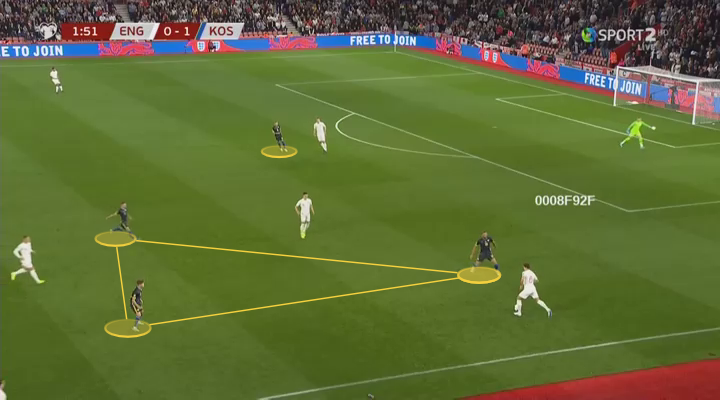 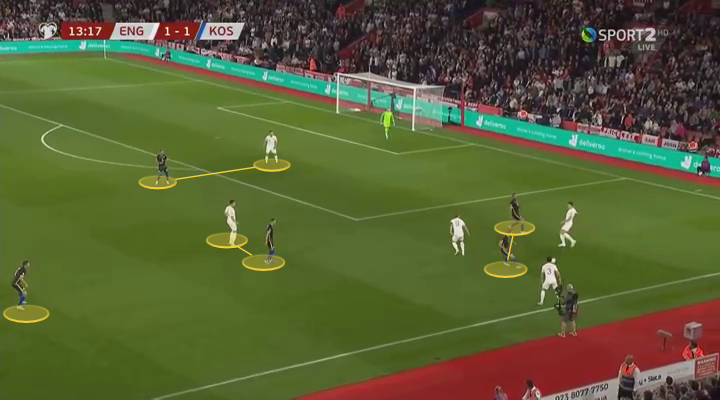 Defensively it was a poor showing from England. Kosovo rightly pushed and pressed England high to exploit their weak defensive frailties. It was effective pressure that usually cut England’s team into two, leaving the three forwards plus Jordan Henderson and Ross Barkley isolated from the build-up. The image below shows how Kosovo’s pressing effectively managed to isolate Henderson and Barkley during part of the game, making it more difficult for England to move the ball to their offensive players. 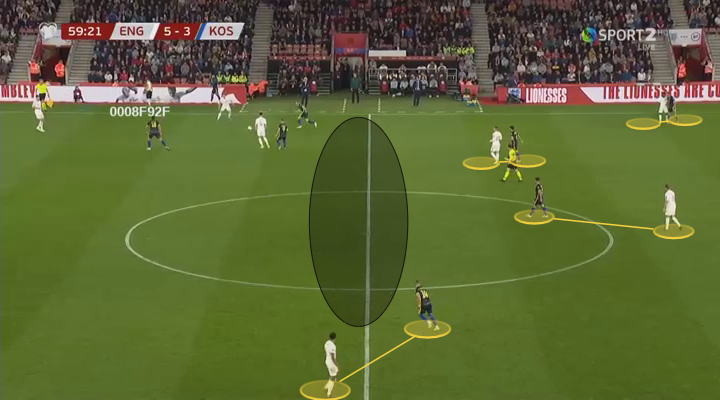 On one hand, this forced England to rely on Raheem Sterling to move centrally to be able to receive the ball. His ability to win 1v1 were the best weapon for England’s attack. On the other hand, Jadon Sancho was not able to participate much during the first half, except for his goals, that were mostly due to Sterling’s great work.

Even though the pressure asked by Bernard Challandes was working, Kosovo lacked the consistency to keep the intensity and effectiveness up. This eventually allowed England to connect their lines, having their full-backs using the whole wing and freeing space for both Sterling and Sancho.

It was after Kosovo lowered the pressure that England regained possession and was able to score five times during the first half, in part thanks to the excellent performance by Sterling.

After gaining control of the game during the first half, England started patiently, trying to move forward with short passes through Ross Barkley and Henderson. They lacked depth in the attack until Sterling got in contact with the ball.

The Manchester City winger was the main offensive weapon for England. His speed, pace and ability were a headache for Kosovo who could never read his movements, as he was constantly moving across the pitch. The image below shows one of the ways England found to progress possession forward, as Sterling found space closer to the middle, where he was not followed by Kosovo’s defenders. 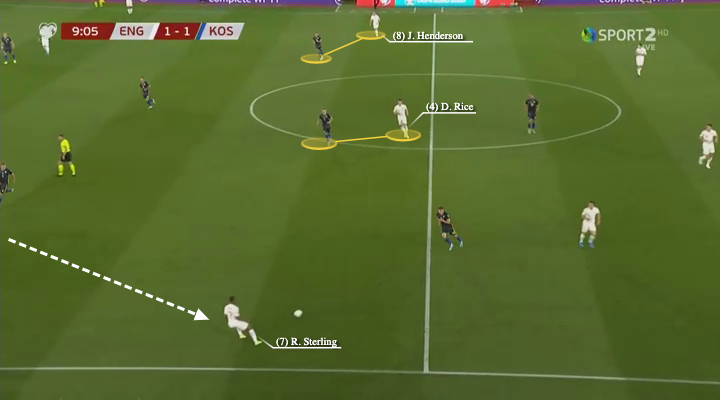 Having Sterling as the connection between the defensive and offensive lines, meant that Henderson and Barkley lost relevance in the attacking phase. They were in touch with the ball when building-up but were far from the offensive players when close to Kosovo’s goal.

Every time one of them moved back closer to Rice to receive the ball, they opened the space for their respective full-back to push higher. Ben Chilwell and Trent Alexander-Arnold were not used enough as offensive alternatives. The images below show how both full-backs were able to move higher when Barkley and Henderson looked to connect in the build-up, but this rarely happened during the game and should have been used more by the hosts. 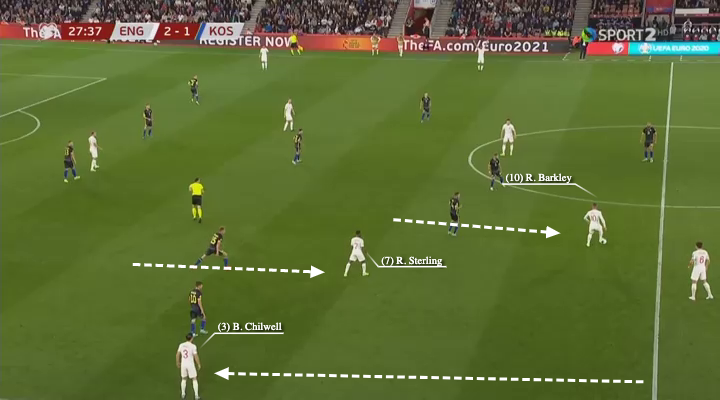 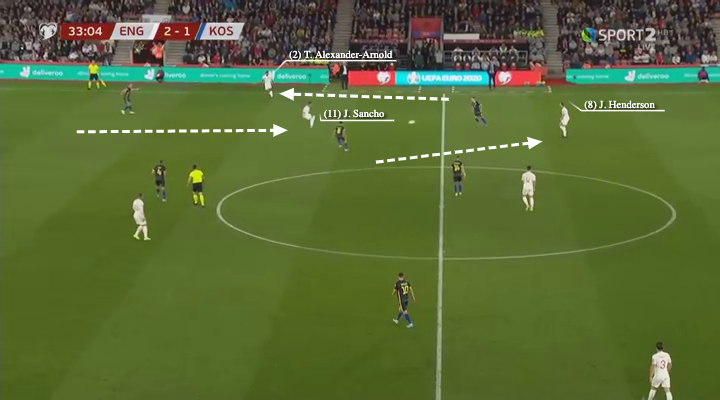 Sterling’s performance also meant that the focus of the attacks by England was on the left-wing and sometimes through the middle when he moved into that position, as seen in England’s second goal.

Moreover, four of the five goals were scored and/or assisted by Sancho, Kane or Sterling. And of the four goals mentioned before, the initial pass was completed by a defender. Harry Maguire, Michael Keane, and Chilwell for the last goal.

In the second half, England’s attack was based more on counterattacking. Again, Sterling was the main weapon, but Sancho did participate more given the amount of space that Kosovo was leaving behind.

Rice continued to struggle to connect with Henderson and Barkley. They dropped back to try to receive the ball when Rice or any of the full-backs were forced to pass the ball back to the central defenders.

The defensive weakness of England and how Kosovo exploited it

Even though Kosovo didn’t generate a lot of danger during the first half, it was impressive to see how easy it was for them to find spaces. With Barkley and Henderson playing higher, Rice was left alone defending in the middle. The image below is a summary of England’s passive defending with three players looking at the one holding possession, but nobody going to a tighter marking. 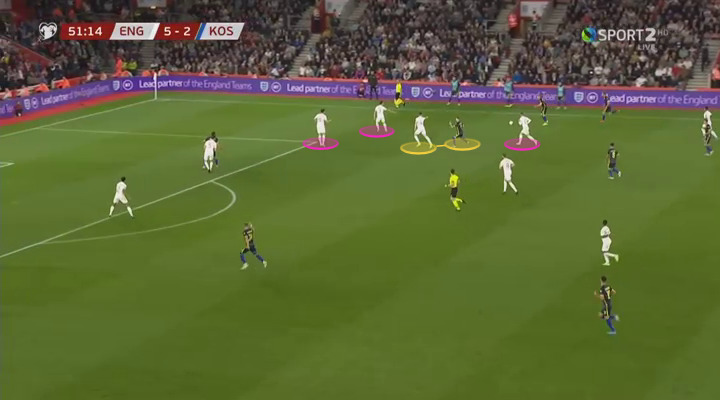 This created spaces for Kosovo’s midfielders either side of Rice, where they were able to receive the ball, turn and still have space ahead of them. This sometimes forced England to have one of their full-backs playing more centred leaving open space on the wings, especially on the side of Chilwell and Mërgim Vojvoda, as seen in the image below. 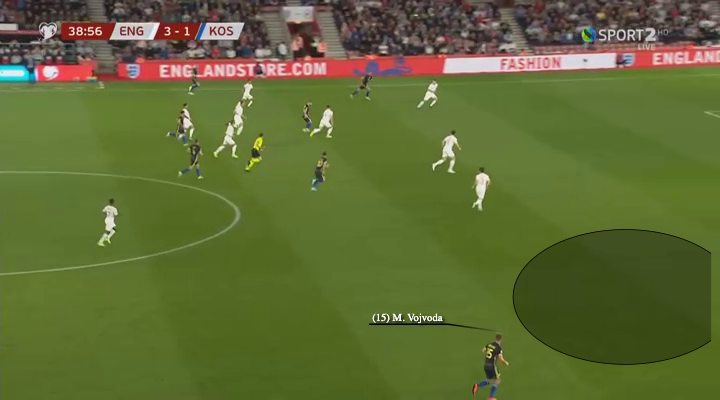 During the second half, Rice’s isolation remained. He had to cover his teammates that were not tracking back to their defensive positions quick enough, having to shield plenty of spaces, especially laterally. This forced him to move out of his more central position. As seen below, Rice is left alone with two players from Kosovo on his side, forcing him to cover wide spaces and usually getting there late. Meanwhile, Henderson and Barkley have no specific marking. 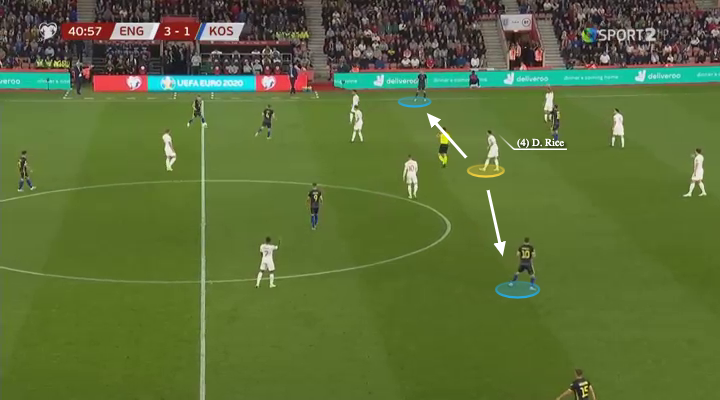 There was less coordination between England’s midfielders and full-backs when attacking, resulting in poor defensive reorganisation that sometimes had the midfielders running back to cover the spaces left by the full-backs. Kosovo’s second goal shows Henderson running back as Alexander-Arnold was left high in the pitch.

This was also not helped by the lack of tracking back by Sterling and Sancho. Although both were dangerous when attacking, they barely provided cover for the midfielders or helped by cutting the move higher by Kosovo’s full-backs. See below the passive marking of Sancho as Kosovo has plenty of players move forward using his side. 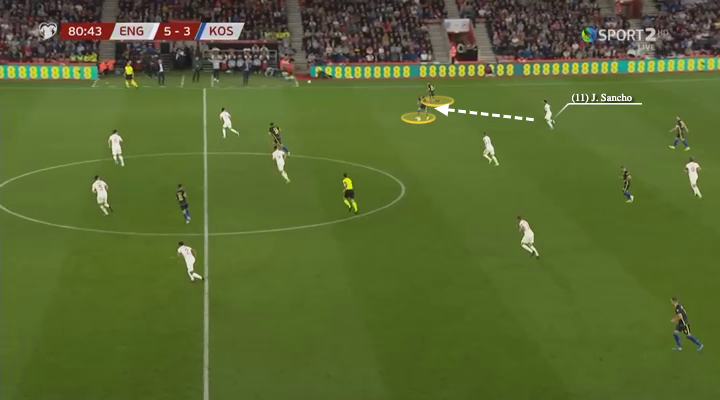 Gareth Southgate has still work to do if he wants England to be a real contender for next year’s Euros. They are very well positioned to qualify, but the defensive performance left plenty of doubts.

Kosovo found it easy in finding spaces close to England’s goal area, and there was a clear lack of coordination in the defensive shape of the team. Individually England has experienced players at the back, but more fluency and coordination is needed in the future.

Meanwhile, Kosovo showed that they have the means to fight for second spot in the group. They showed great mobility and physicality both in pressing and attacking. They still need to work on their defensive coordination. Their defence was badly positioned several times during the game especially after losing duels that should not have happened in the first place.

What this means is that they can avoid the 1v1 by pushing the rival to pass the ball back or forcing them to go wider and further from their goal area. Several times they tried to anticipate or attack the ball early and were caught out.