Italy took another big step towards securing qualification to Euro 2020 by beating Armenia 3-1 following goals from Andrea Belotti, Lorenzo Pellegrini and an own-goal. This tactical analysis will look at the tactics employed by both sides but mostly focus on Italy’s new identity under Roberto Mancini, particularly their passing patterns and attacking ideas. 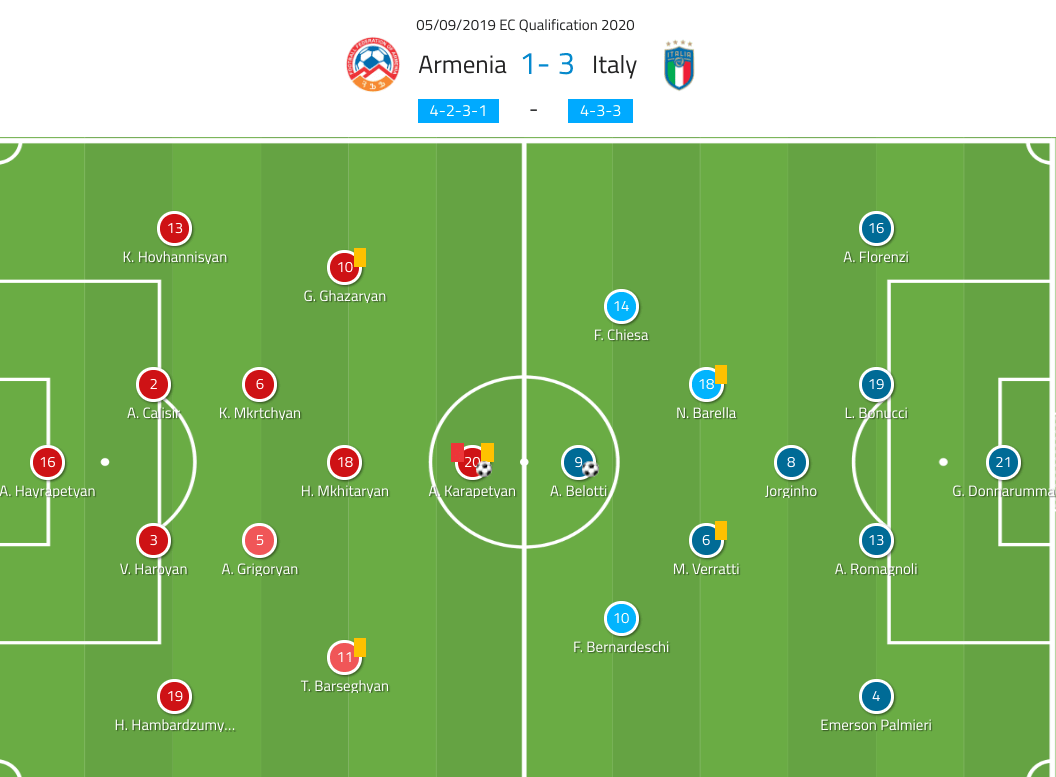 Armenia’s setup was a 4-4-1-1 where Henrikh Mkhitaryan played just behind the striker and eventual goalscorer, Alexander Karapetyan. As I will discuss in this piece, Armenia struggled with their defensive compactness despite setting up to frustrate the Italians.

Mancini continued with the very attacking 4-3-3 he has used in the last year or so. That meant Marco Verratti and Nicolò Barella partnering Jorginho in midfield. However, there were some changes since the win over Bosnia-Herzegovina in June though, as Gianluigi Donnarumma, Alessandro Florenzi, Alessio Romagnoli, Federico Bernardeschi and Andrea Belotti all came into the team.

As they have in their most recent matches, Italy rotated quite a bit when in possession. The two full-backs, Florenzi and Emerson, had very different roles as the right-back stayed deep and narrow to establish a back-three in possession while the Chelsea left-back moved high and wide down the wing. As a result, Federico Bernardeschi tucked inside from the left into the half-space, while Federico Chiesa maintained full width on the opposite side. The two Fiorentina academy graduates did, however, swap positions on several occasions and fulfil the opposite roles. In midfield, Barella would push high into the right-sided half-space while Verratti and Jorginho remained deeper, establishing a 3-2-4-1 in attack. We can see this shape below.

As we will see below, Italy hurt Armenia through their passing into the half-spaces where the home side had very poor coverage. Italy were impressive in their use of the ball as they varied between very methodical, short passing and more vertical passing as highlighted in the two images below. This is a huge positive as they demonstrate various ways and ideas to progress the ball.

It was evident throughout the game that Italy had made it a priority to exploit the space given to them in the half-spaces. The positioning of Bernardeschi/Chiesa and Barella in these areas gave Italy a 4 vs 3 numerical advantage in midfield that Armenia never found a way to combat. The midfield box was very helpful in Italy’s ability to control possession and progress the ball as Verratti and Jorginho often drew pressure and then fed the ball into the more attacking midfielders. In the image below, Bernardeschi and Verratti combine to find Barella in plenty of space between the lines of Armenia’s defence and midfield. 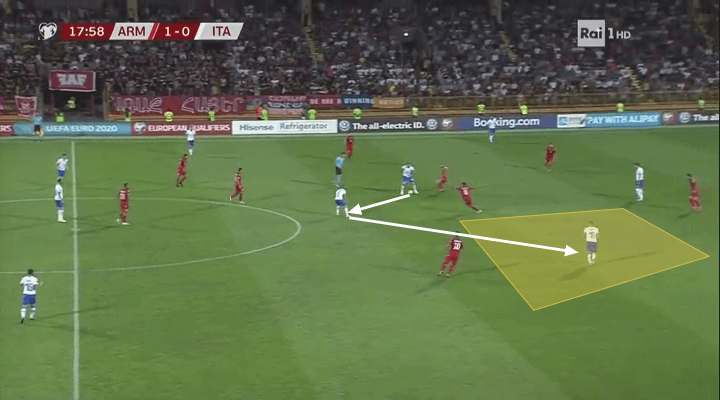 Italy’s attacking structure was very good all through the game as they overloaded the central areas but maintained the wide threat provided by the left-back and the right-winger. This meant the Italians always had a dangerous area to attack and use to progress the ball past Armenia’s last line. In the image below, we can see how Italy looked to carve their way through Armenia’s quite spacious defence.

What makes Italy a dangerous side is that they can combine their attractive short-passing game with a more direct threat, as mentioned above. One of the methods they sometimes use is lofted passes over the defence to attackers running into depth. The image below highlights Jorginho playing a pass over the top to Belotti who scored, albeit from an offside position. Here, the positioning of Barella and Bernardeschi between the lines is critical since it draws the attention of the defenders which allows Belotti to attack the space behind the defence without any real disturbance. 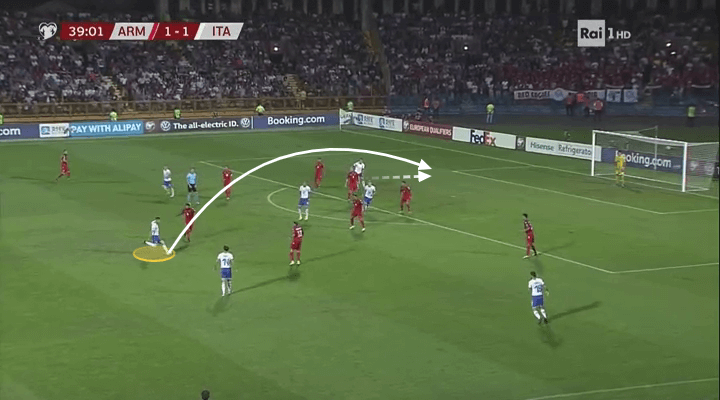 However, while Italy’s possession play was largely impressive, they did have some issues in the first half in dealing with Armenia’s counter-attacks. This was largely due to Verratti and Jorginho often becoming drawn to the same side in order to connect with each other in possession. That is an obvious strength as long as Italy has the ball, given the press-resistance and passing ability of both players, but when the ball is lost and Italy’s otherwise effective counter-press fails, Mancini’s men failed to stop the counters. The below image highlights Armenia winning the ball prior to their opening goal. Look at the positions of Verratti and Jorginho- the midfield is totally open for the home side to attack. 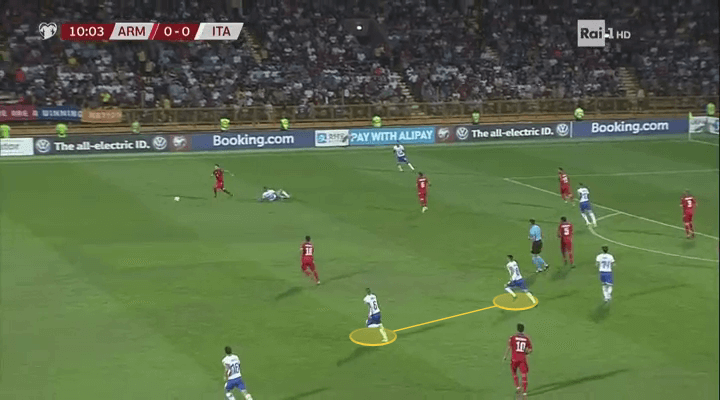 As the obvious underdog in this game, everyone expected Armenia to sit off and look to hit Italy on the break (which they did very well). However, the defensive setup of the home side was poor and extremely open, which helped Italy to dominate the ball and progress the ball easily. Additionally, Italy created a plethora of good chances but were quite wasteful in front of goal. The image below highlights the main issue with Armenia’s 4-4-1-1: the space between the defence and midfield was enormous.

The problem was recurring, as seen below, where the two Armenian central midfielders are drawn out of position due to their man-orientated focus on Verratti and Barella in this instance. With Romagnoli (white) in possession, the Milan centre-back has a simple, progressive passing lane open to Bernardeschi between the lines. 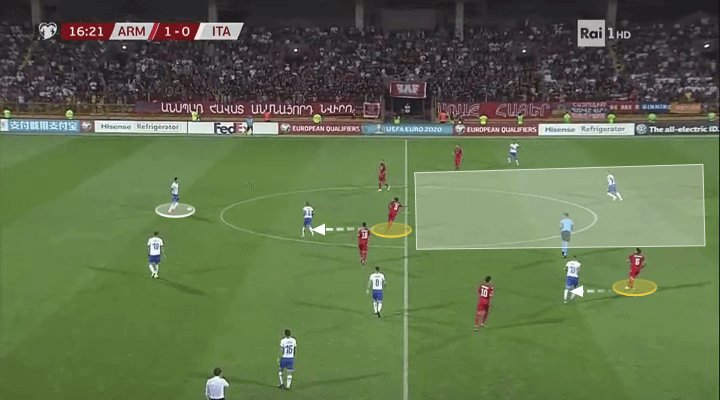 The movement of Bernardeschi, in particular, proved problematic for the Armenians. The right-back, Hovhannes Hambardzumyan, had a nightmare due to the Juventus attacker’s movement. As you see below, Hambardzumyan was often attracted to follow Bernardeschi inside, but that left Emerson free down the side as Hambardzumyan got little defensive help from his winger Tigran Barseghyan. On the occasions when Hambardzumyan decided to stay wide to deal with Emerson, Bernardeschi invariably was free between the lines. This issue highlights how Armenia seemed quite unprepared as to how they would deal with Italy’s setup which wasn’t a surprise at all.

Another example of Hambardzumyan’s conundrum can be seen below as he (black) is caught in the middle between dealing with Bernardeschi or defending against Emerson out wide. Also, note how huge that uncovered space between the lines is again. Armenia’s compactness was horrendous at many times and it prevented them from frustrating Italy, playing-wise, as they could have done. 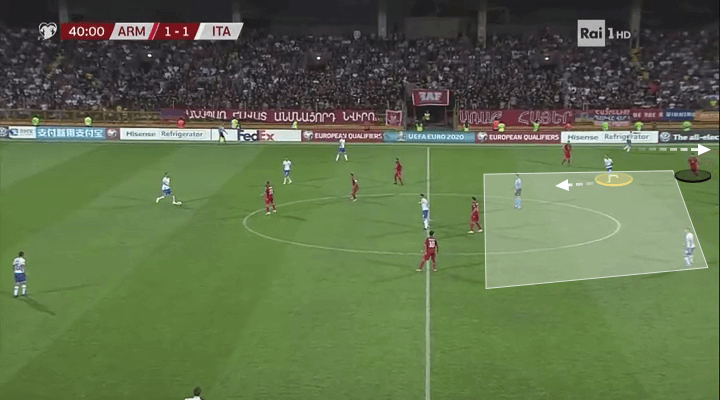 After Armenia had their goalscorer Karpatyan sent off at the end of the first half, Mancini made a good change in Italy’s attacking shape. With an extra man, he pushed Florenzi up the right wing, leaving only Bonucci and Romagnoli back to construct the attacks. With Florenzi now joining the attack in the wide area, the winger (most often Chiesa) who had provided the width previously, could now move inside and provide an extra option between the lines. We can see the changes to the back-four when building from the back in the image below.

Mancini also made a decisive change in terms of his personnel when replacing Chiesa with Pellegrini. With the Roma midfielder on the pitch, Italy had an extra creator on the pitch to break down Armenia’s defensive line. Pellegrini occupied the left-sided half-space with Barella continuing in the right and Bernardeschi playing further forward in and around Belotti. We can see this new attacking shape below.

The changes made Italy’s attacking shape even more dangerous as they kept their effective midfield box that provided options between the lines, maintained the maximum width provided by the full-backs and gained an additional attacker, Bernardeschi, in a higher central position to use with deeper passes. Eventually, the positioning of Pellegrini would prove decisive as he made a diagonal run from the left to head in Bonucci’s cross to put Italy 2-1 up.

As this match analysis has shown, Italy seem to be on the right track under Roberto Mancini. Their playing style is based around the very technically comfortable players they have in the team and it suits them well. With five wins from their first five Euro 2020 Qualifiers, Italy are on course to finish top of the group and qualify for next summer’s showpiece. Additionally, playing like they are now, Italy might be ready to challenge for the medals at that tournament.