On Friday, Portugal played Germany in a Group F Euro 2020 fixture. It was Germany who came out on top, bouncing back from their previous loss to France, to beat the Portuguese 4-2. It was an interesting game, where the momentum switched between either side as the game progressed. Germany had an early goal disallowed, due to a handball in the build up from Bayern Munich‘s Thomas Muller, and it was Portugal that ended up taking the lead, through Cristiano Ronaldo. However, the Germans found themselves ahead at half time, courtesy of own goals from Raphael Guerreiro and Ruben Dias. Portugal weren’t able to recover and swiftly found themselves down 4-1 in the second half, before a consolation goal from Diego Jota rounded up the scoring on the day.

This tactical analysis gives an in-depth analysis of the tactics used by both sides in this fixture.

Portugal fielded a 4-1-4-1 formation, with no personnel changes from their 3-0 win over Hungary, The only difference was with Danilo Pereira being employed as a single pivot in this game, whereas against Hungary he was joined as a double pivot by William Carvalho.

Similarly, Germany fielded the same line-up as in their 1-0 loss to the French. Most notably, Joshua Kimmich continued in the right-wing back position, as did Serge Gnabry in the centre-forward role. Muller, and Chelsea‘s Kai Havertz played behind him, in slightly more narrow roles than they did in the French game, the impact of which will be explained later on in this analysis. 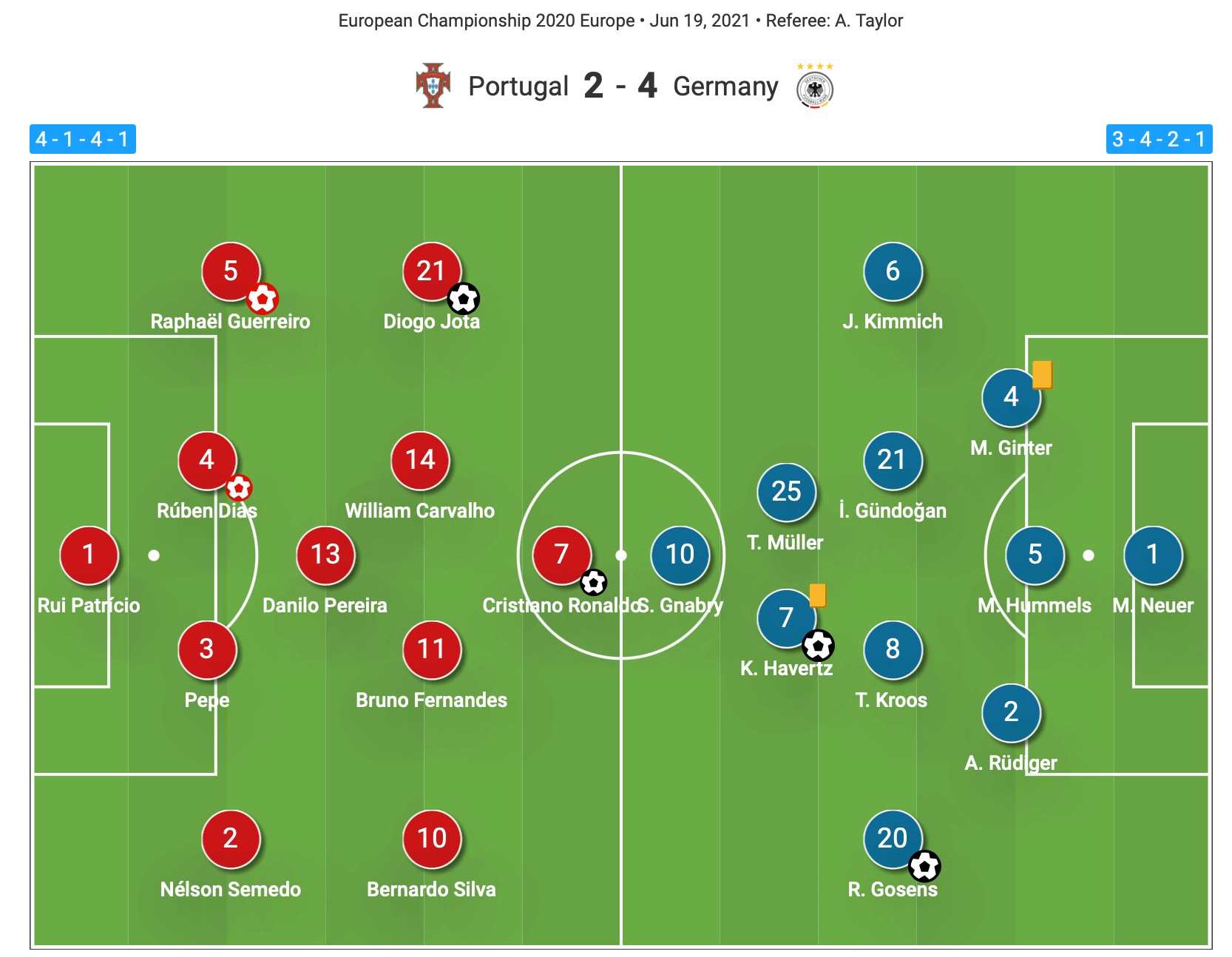 Portugal’s use of quick breaks 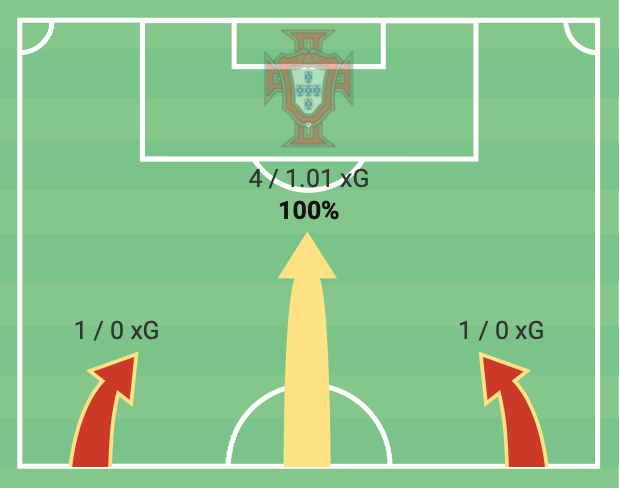 Portugal conceded possession to Germany, taking just a 41.72% share of possession on the day. It was clear from the word go that they intended to hurt the Germans on transition. This won’t be the only time Germany are targeted in this way in this tournament. With a midfield duo of Ilkay Gundogan and Toni Kroos, whilst outstanding ball players, neither are particularly known for their defensive work. With Gosens and Kimmich playing as wing-backs there will be space to hit in behind on the counter against that back three of Antonio Rudiger, Mats Hummels and Mathias Ginter. When you look at the players in this German starting XI, it makes sense to look to hurt them on the break with direct attacking play.

Portugal managed just seven shots in total over the course of the game, and yet three of these came from counter-attacks. With an overall 1.96xG for the game, we can see that just over half of this value came from their counter-attacks. These came overwhelmingly through the centre of the pitch, with Cristiano Ronaldo the focal point of the attacks.

Their first goal came from such an event, with Ronaldo surging forward in the central channel. His presence was enough to draw the attention of Germany’s centre-backs towards his run, as we can see in the image below, and Diego Jota was able to steal into the space behind and receive the pass over the top. 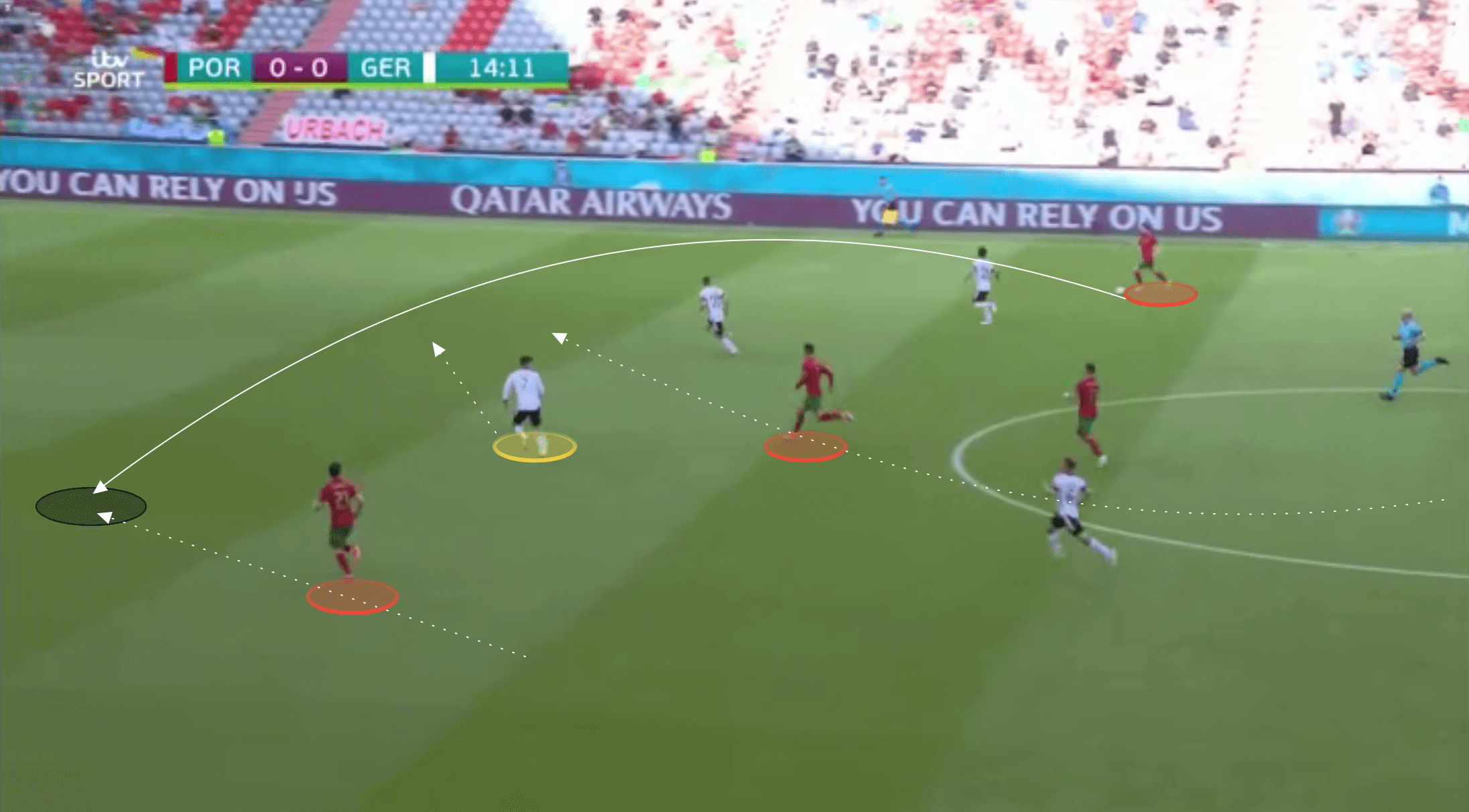 Diego Jota was then able to roll the ball across goal for Ronaldo to punch home.

When Portugal were able to break immediately from Rui Patricio they were very effective but understandably less so when Germany’s defence were behind the ball and in shape. Even when Portugal turned the ball over in midfield they still looked to play forward quickly. There was a lack of compactness in attack though, particularly when Ronaldo dropped in as we can see below. 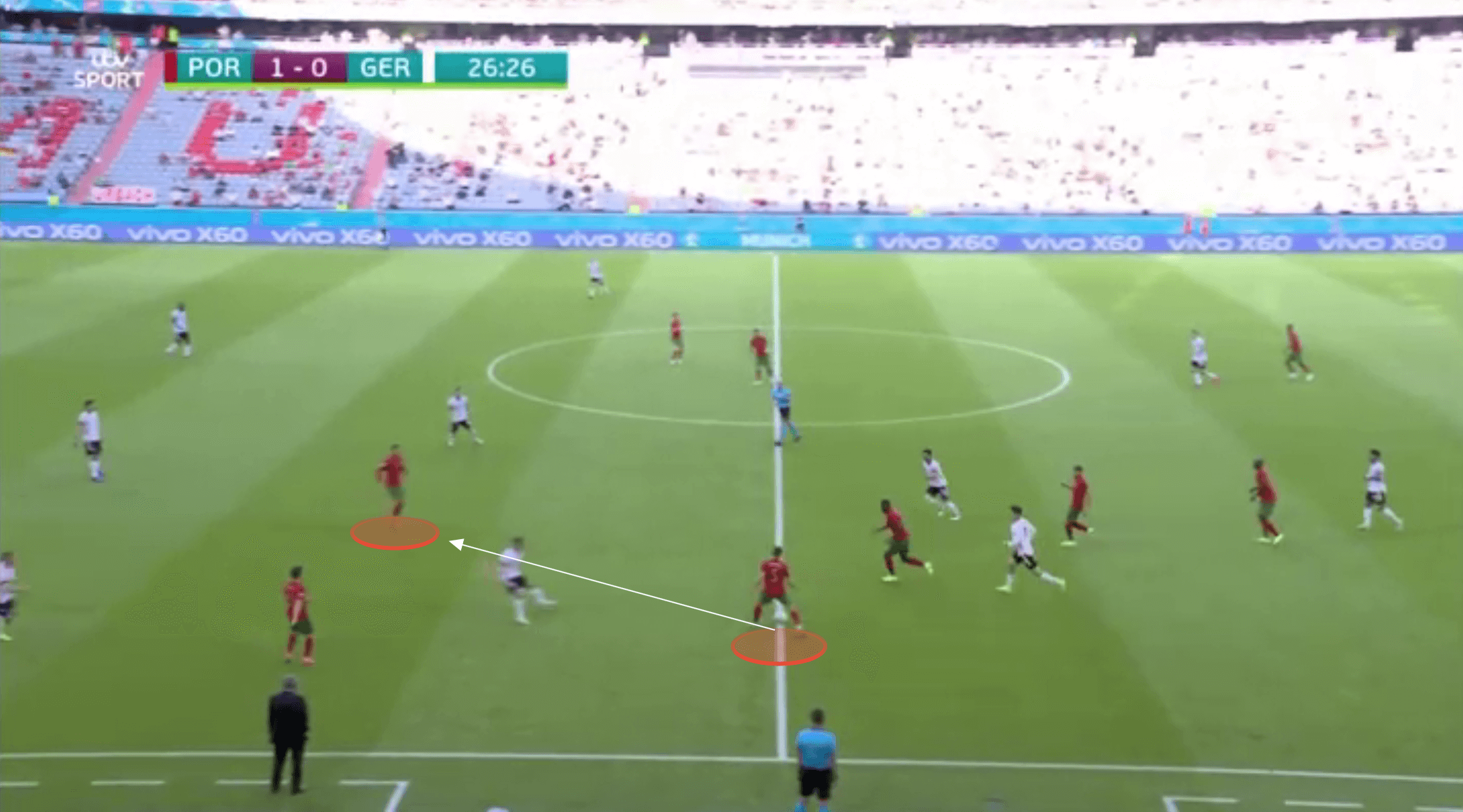 Ronaldo would look to get on the ball in deeper areas, and would find space as he sought to do so. However, as he offloaded possession, there were no runs in behind from his supporting cast.

Below is a perfect example as William Carvalho received the pass from Ronaldo and surged forward. We can see that he was instantly surrounded by four German defenders. There is a lack of any kind of runs being made in behind, with Portugal struggling to have players push forward into attacking areas in these instances. We can also see how deep Ronaldo remained, not impacting the counter. 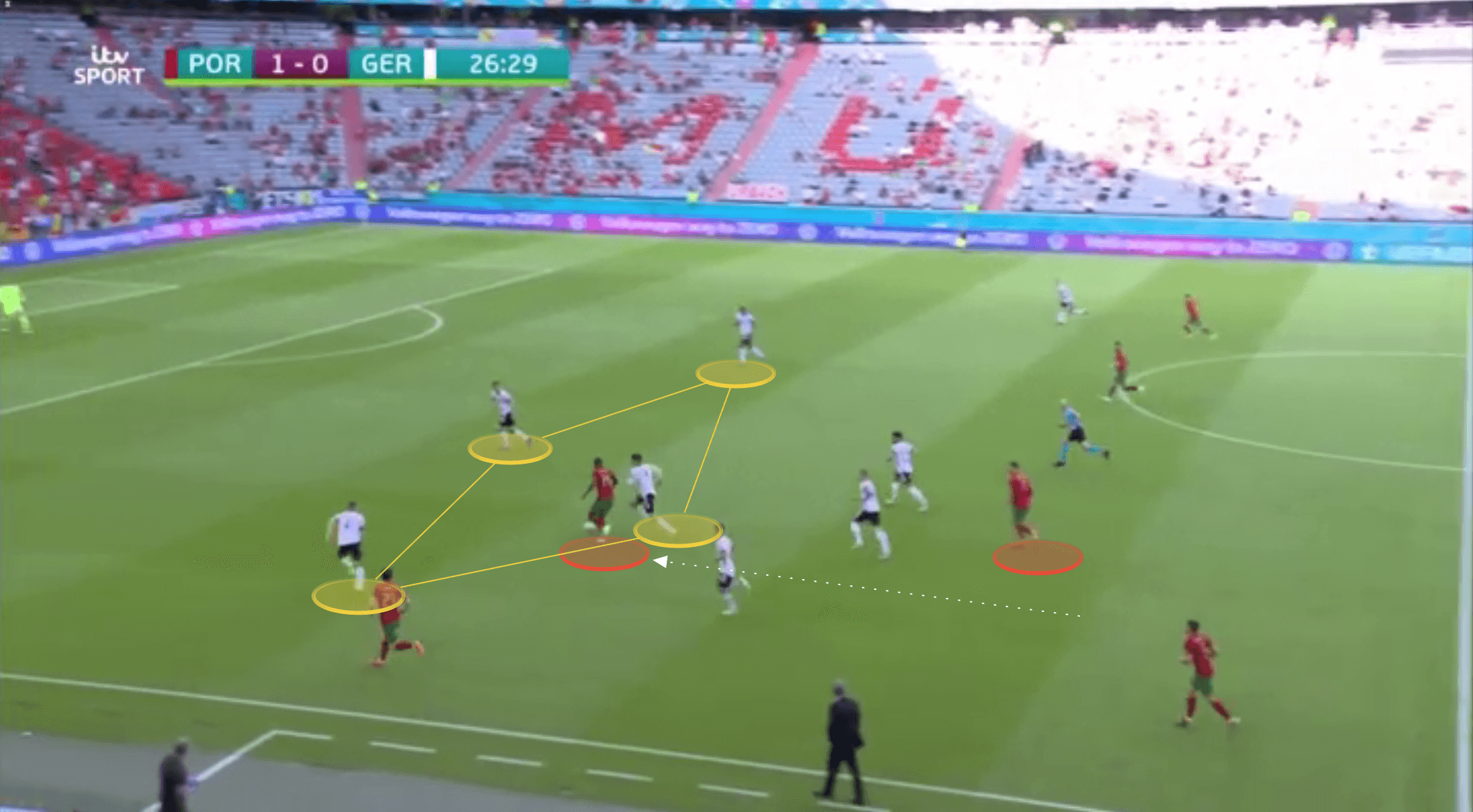 The Germans looked to exploit the attacking width provided by the wing-backs by narrowing Portugal’s 4-5-1 out of possession as much as possible. They used quick interplay between their midfielders and all three of Gnabry, Havertz and Muller were given the licence to drop in and help overload in central areas.

We can see the effect this had on Portugal’s shape in the image below, whilst the high and wide positioning of Robin Gosens on the left flank should be noted. 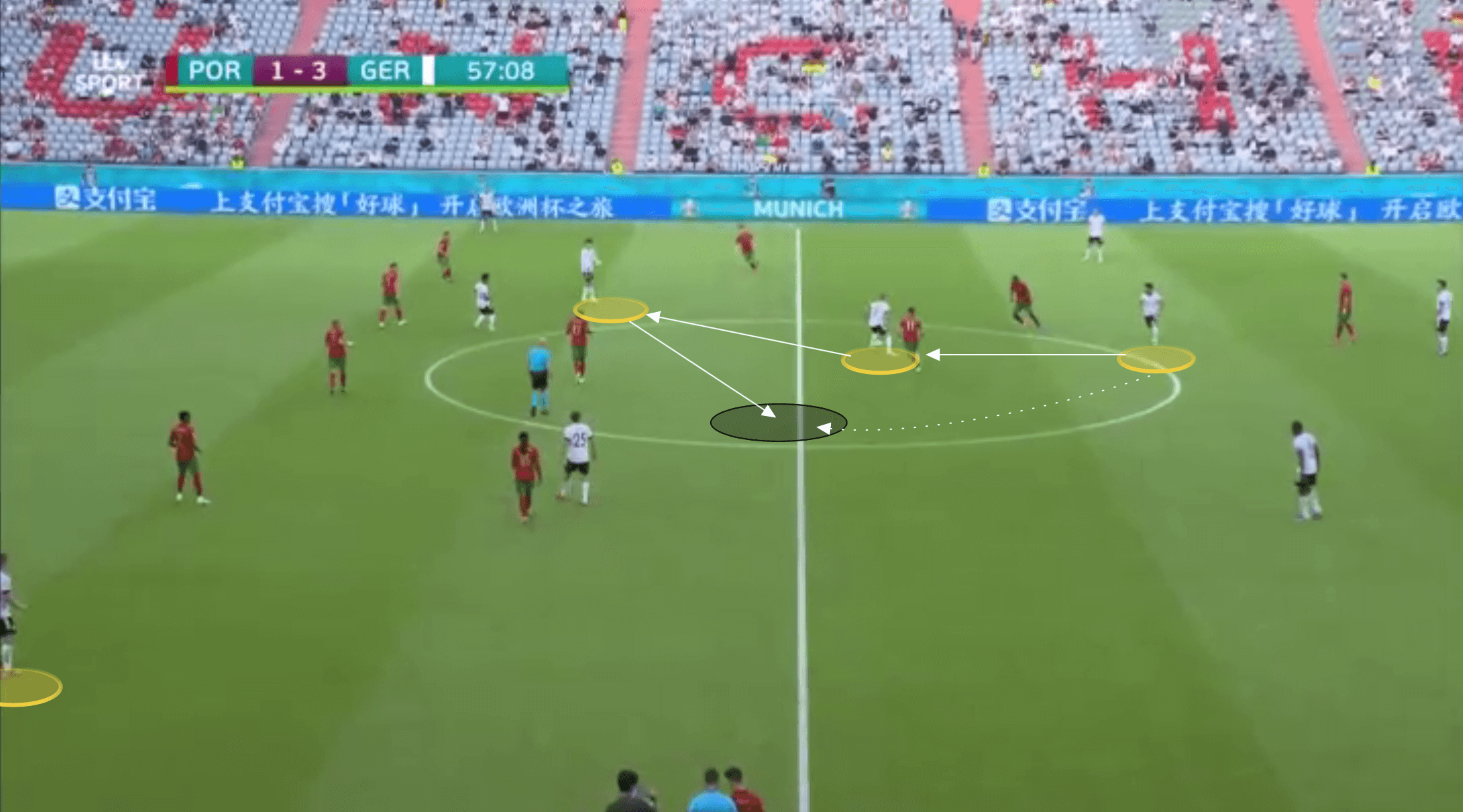 Germany’s defenders would push forward to allow them to stretch the pitch too. Below we can see right-sided centre-back Ginter pushing forward to provide an outlet as Germany drew the Portuguese shape towards the left flank. 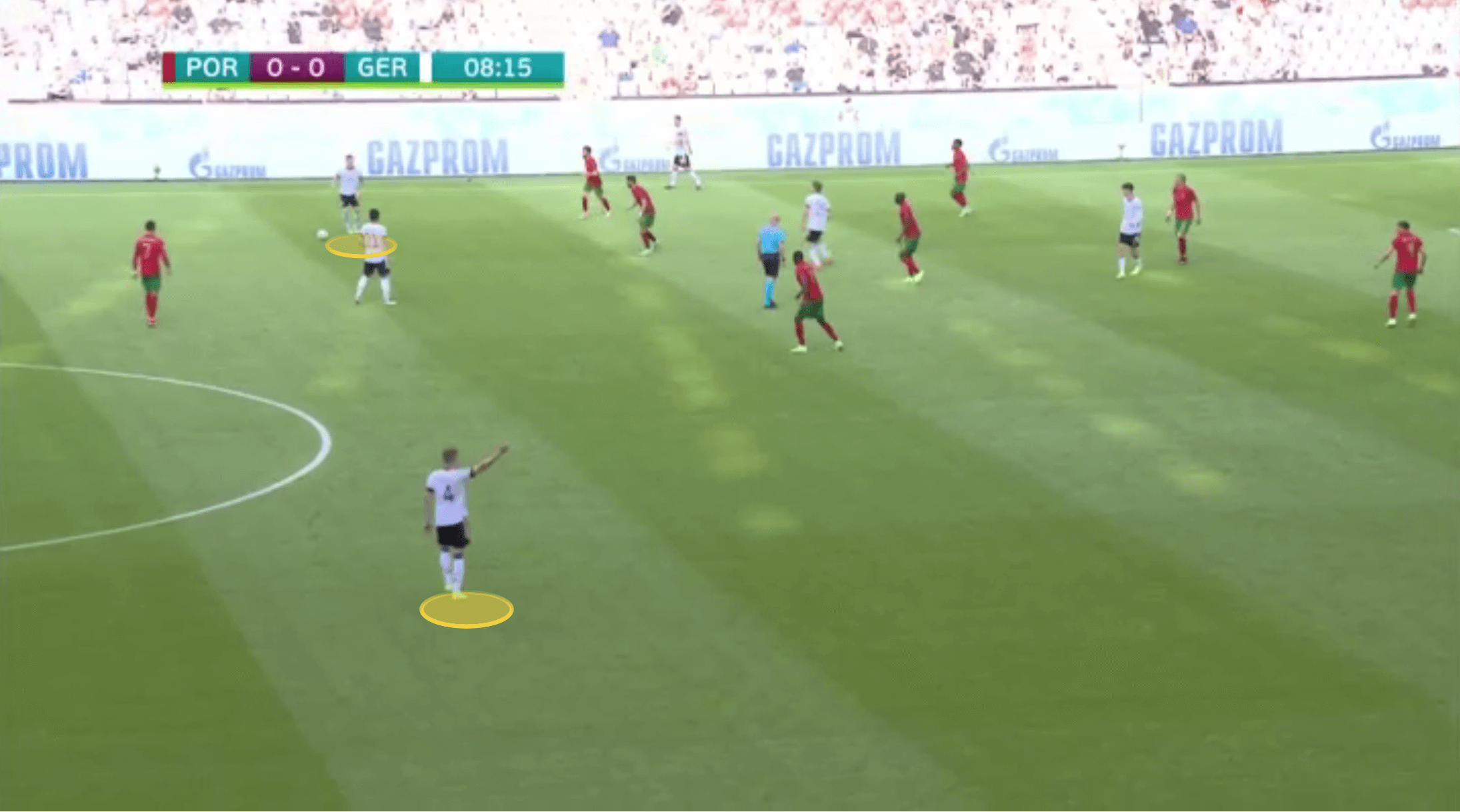 But what allowed Germany’s wing-backs to push even further forward was how aggressive the German centre-backs positioning was. When Hummels felt there was the possibility to step forward and help switch play himself, he would do so. This prompted Ginter to move out of that position and shift wide to where right wing-back Kimmich would have been. And then of course this would allow Kimmich to push further forward. 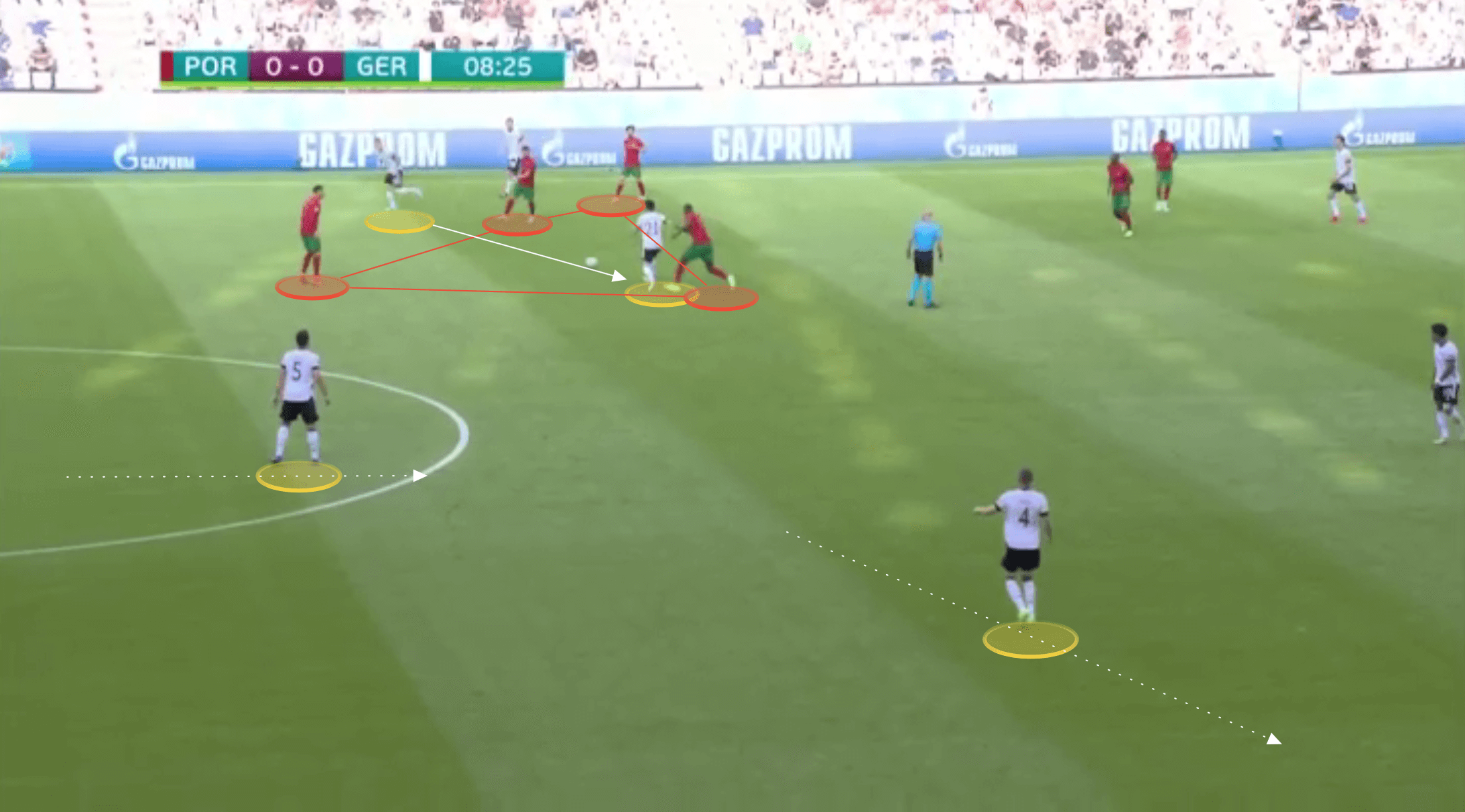 Throughout their possession phase, Germany looked to have their attacking players cover the entire width of the pitch. We can see how with both wing-backs pushed high in the image below, Portugal’s back four is outnumbered. 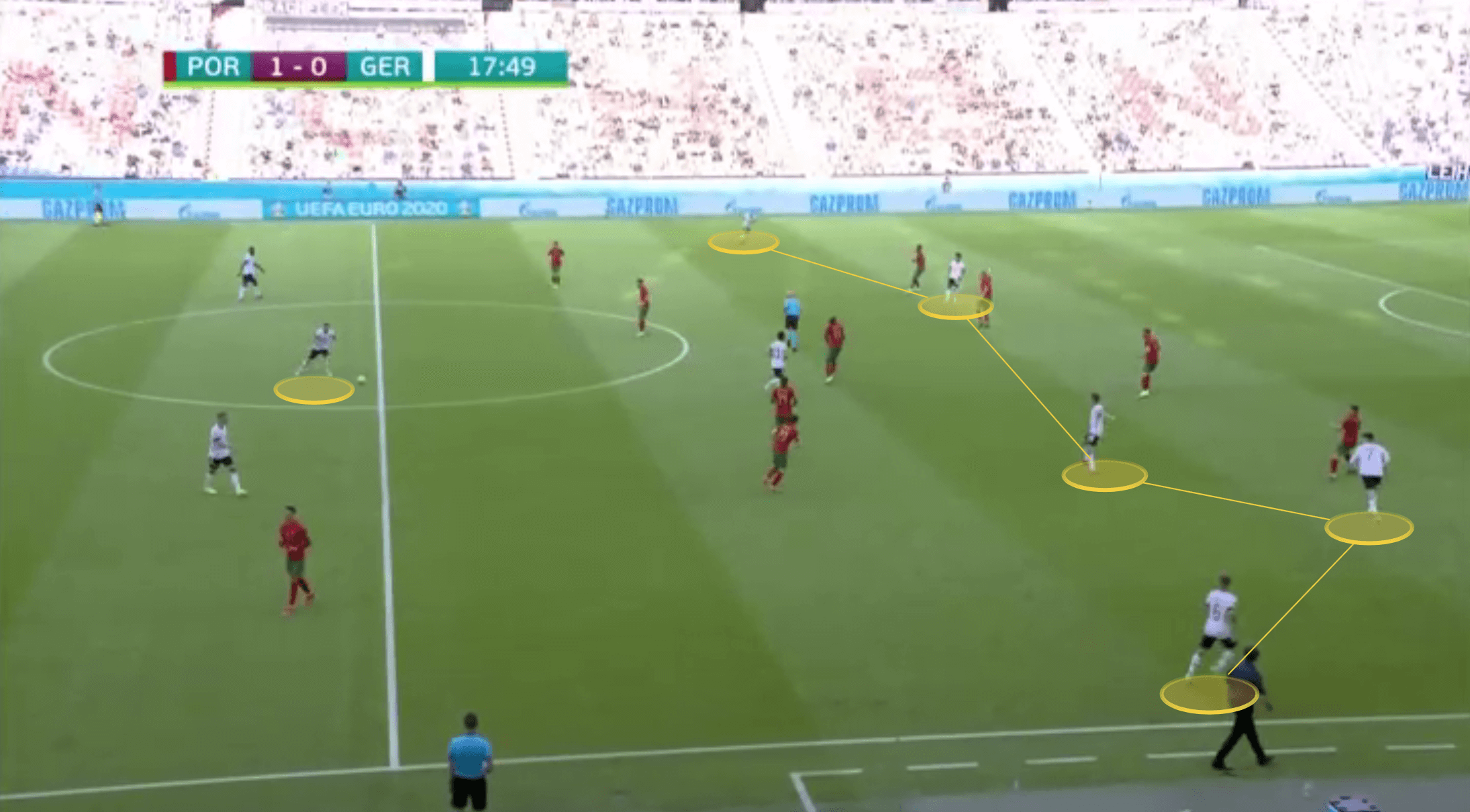 Kroos would drop deep to get on the ball and would hit diagonal balls in behind on top of using combination play with those around him. We can see in the previous image how Portugal’s midfield five stay rigidly narrow, and whilst  they are heavily protecting any central forward passes from Kroos, the only German player in this area is Gundogan. This left plenty of space in between the lines for Muller, Gnabry or Havertz to drop into, but it also meant that both Kimmich and Gosens were necessary attacking outlets for Germany to use to play behind.

By playing into the wing-backs, Germany could draw the Portuguese full-backs out of shape and have their central attacking players make runs in behind. 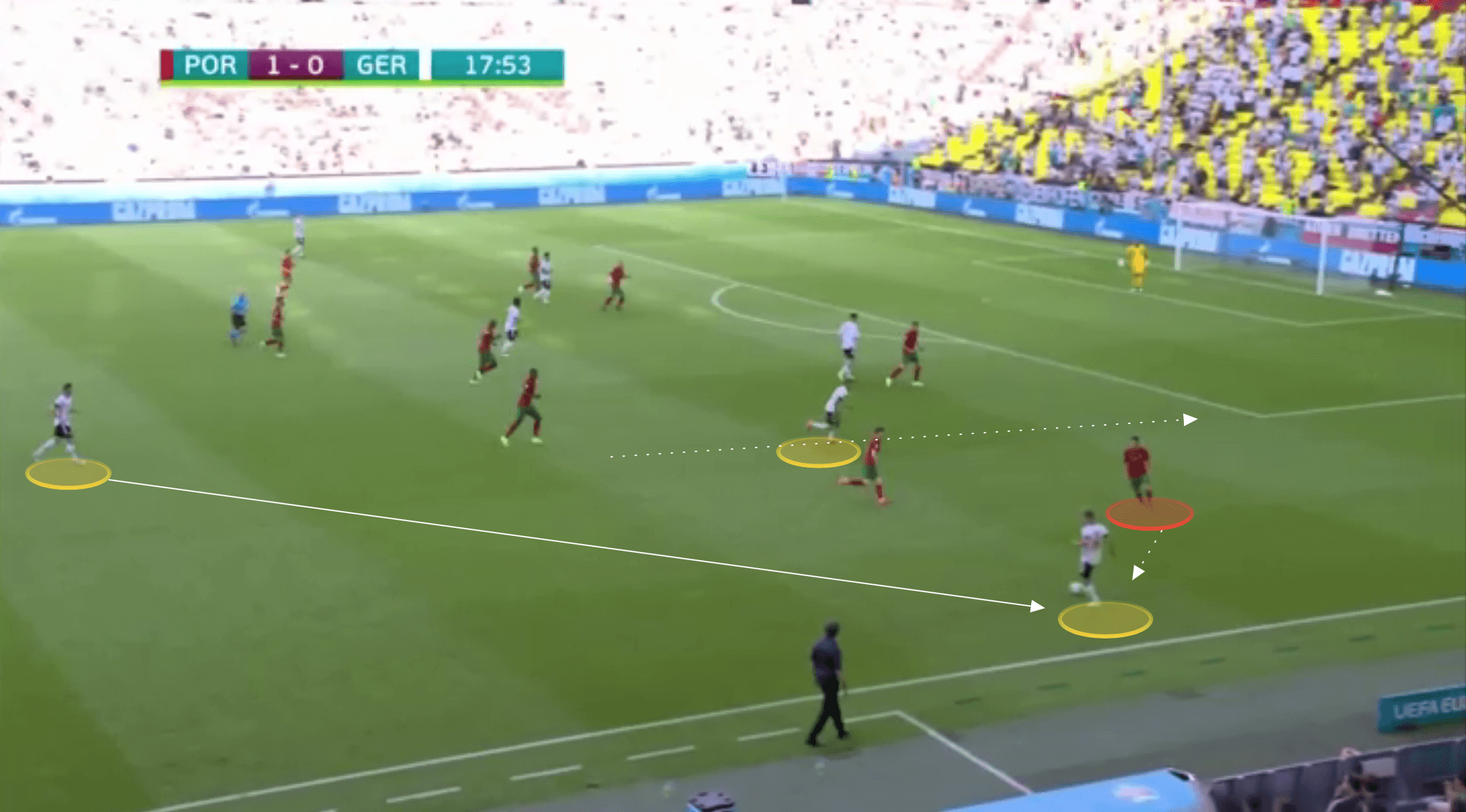 Or Kroos might look to instantly play in a wing-back behind. We can see Kimmich looking for this with an angled 45 degree run behind. 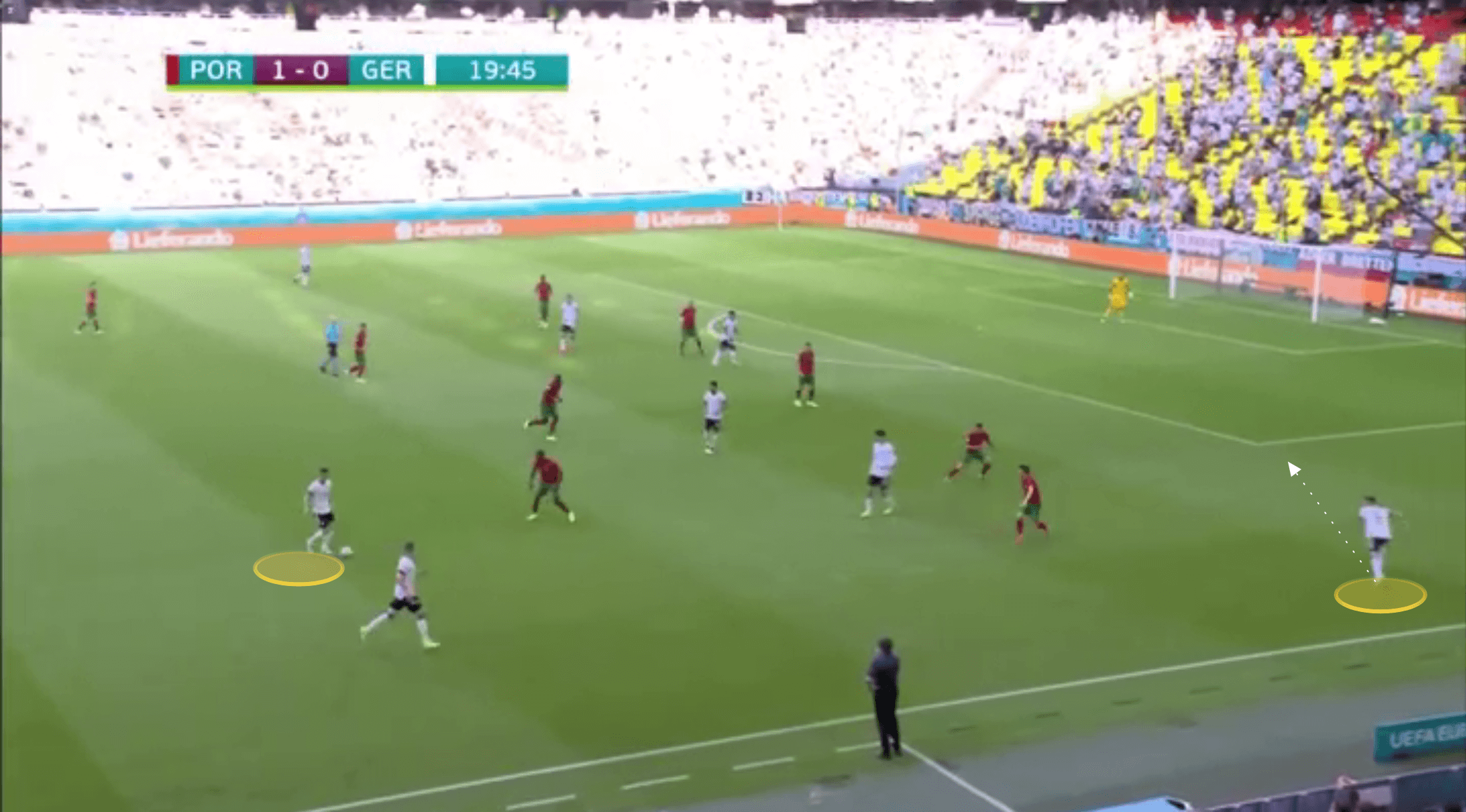 The use of Gosens in attack

However, of the two German wing-backs, it was Gosens who was most effective. He was purposefully left very wide and high by Joachim Low, and as we can see from the pass map below, Germany looked to have their attacking trio play closer to the right side, and therefore more of their build-up came in areas further away from Gosens. 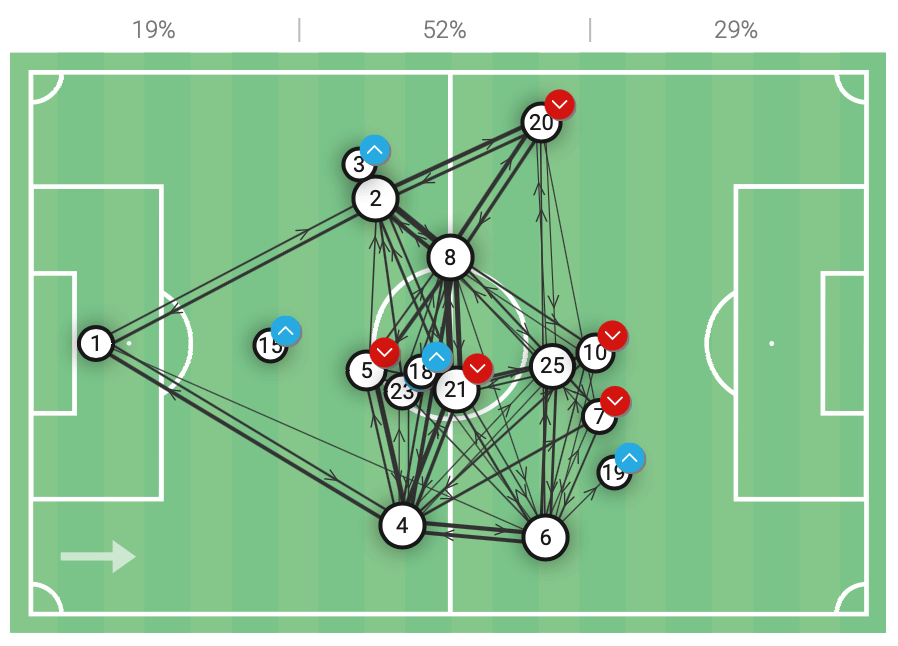 It was through this tactic that Germany were able to get their third and, to an extent, fourth goals of the game.

For the third, they focus their play away from the left flank and Portugal’s defence dropped into a compact shape. Gnabry’s run in behind towards the right side of the 18-yard-box created enough space for the pass out to Gosens, who was then able to have the time and space to play across goal for Havertz to score from. 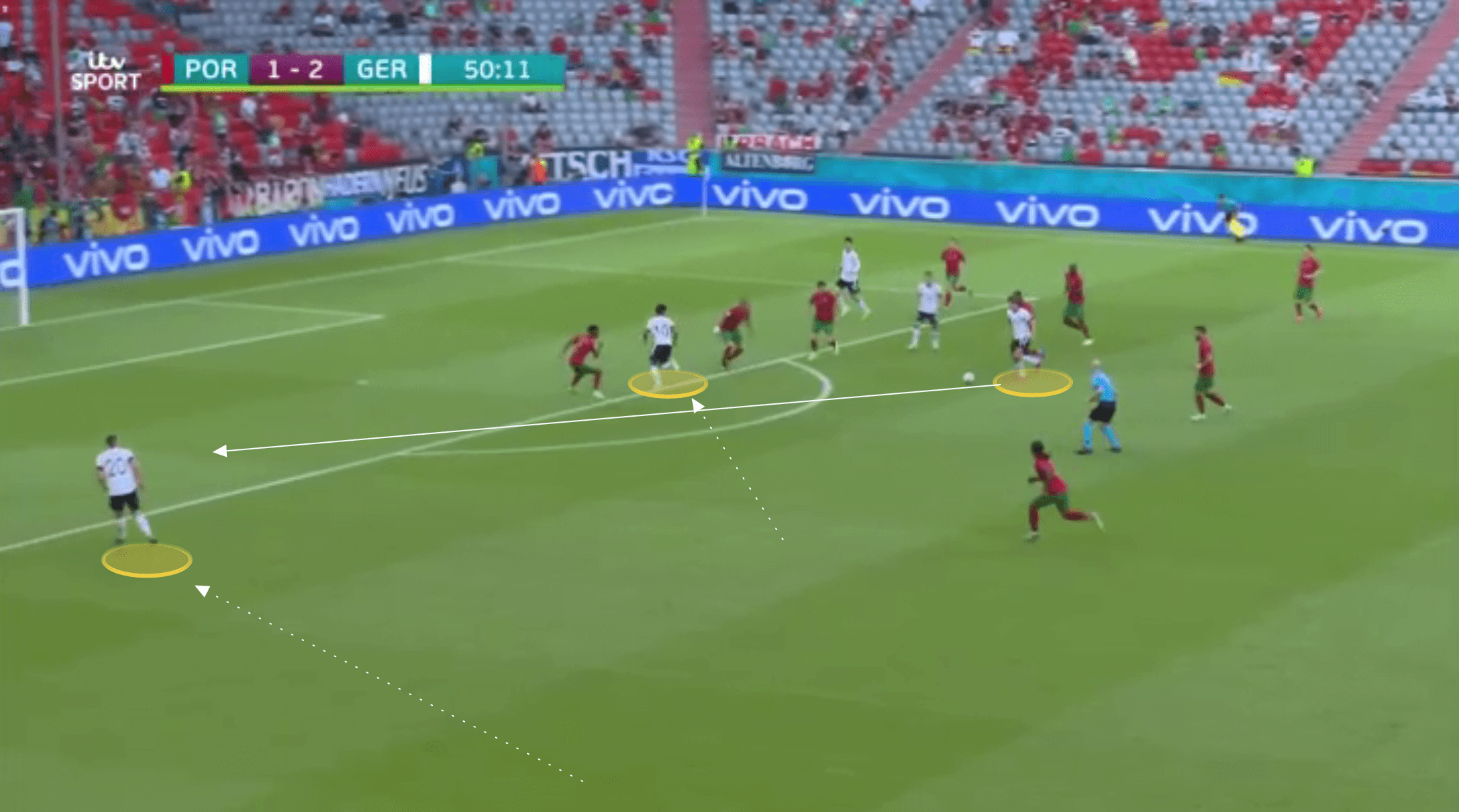 Again for the fourth goal, Germany were able to pick out Gosens at the back post, and this was partly down to some abysmal marking from Rafa Silva, who allowed the wing-back to just glide into the box whilst the Portuguese refrained from getting goal side. This allowed Gosens to score on the hour mark, and put the game to bed with 30 minutes left to play. 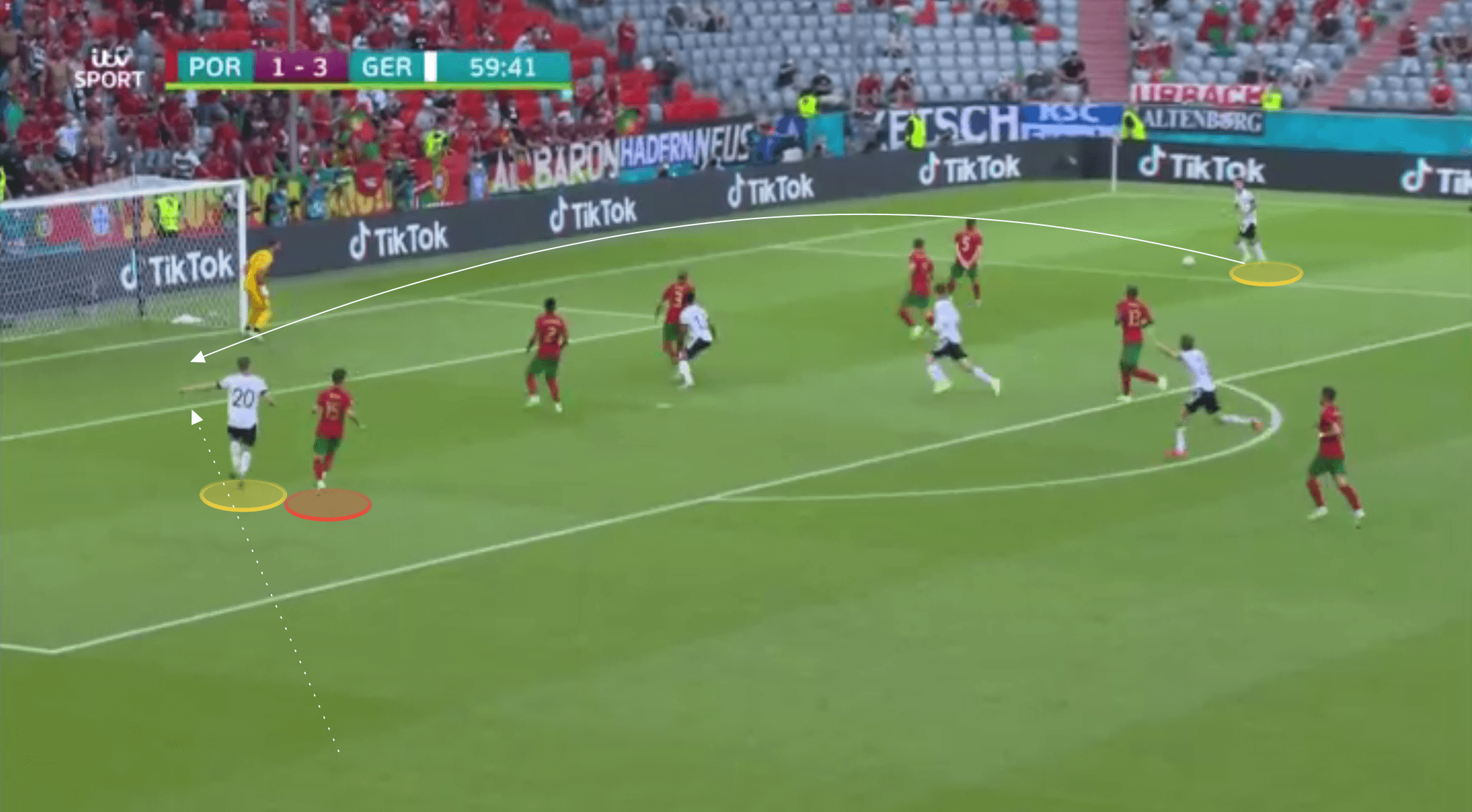 It wasn’t just through combination and narrowing the opponent where Germany were able to exploit the wing-backs.

With Muller and Havertz playing either side of Gnabry they naturally operated in the half-spaces, and were able to shift across to create overloads with their wing-backs against the Portugal full-backs. This overload could be accentuated by Gnabry dropping into the 10 space to receive a pass, and encouraging one of the Portugal centre-backs to step forward, as we can see below. This instantly created a 2v1 on one side. 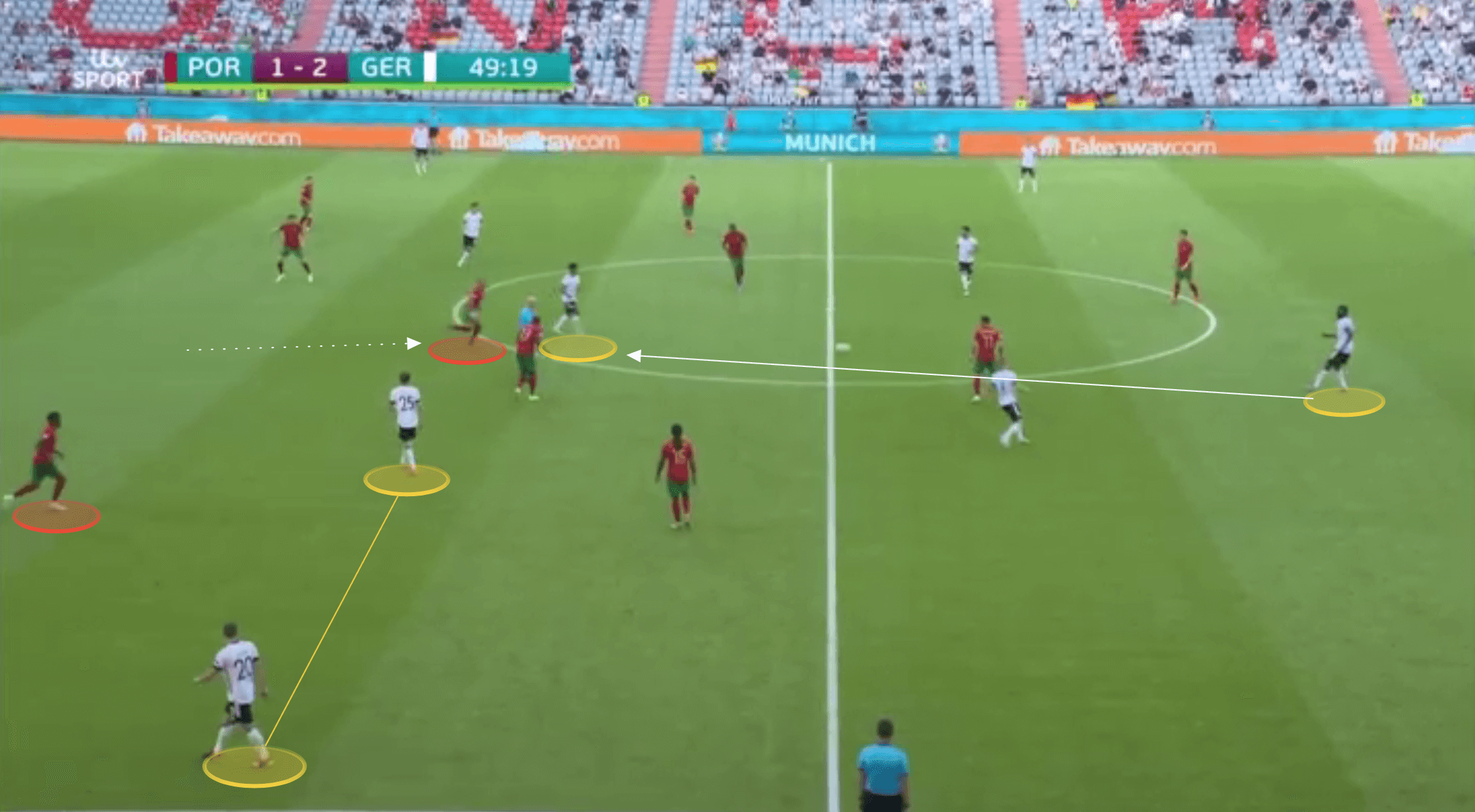 Gnabry would look to bounce the ball back safely to a player who could then pick out the wing-back with a direct diagonal pass, and allow the inside forward to run in behind and exploit the overload. 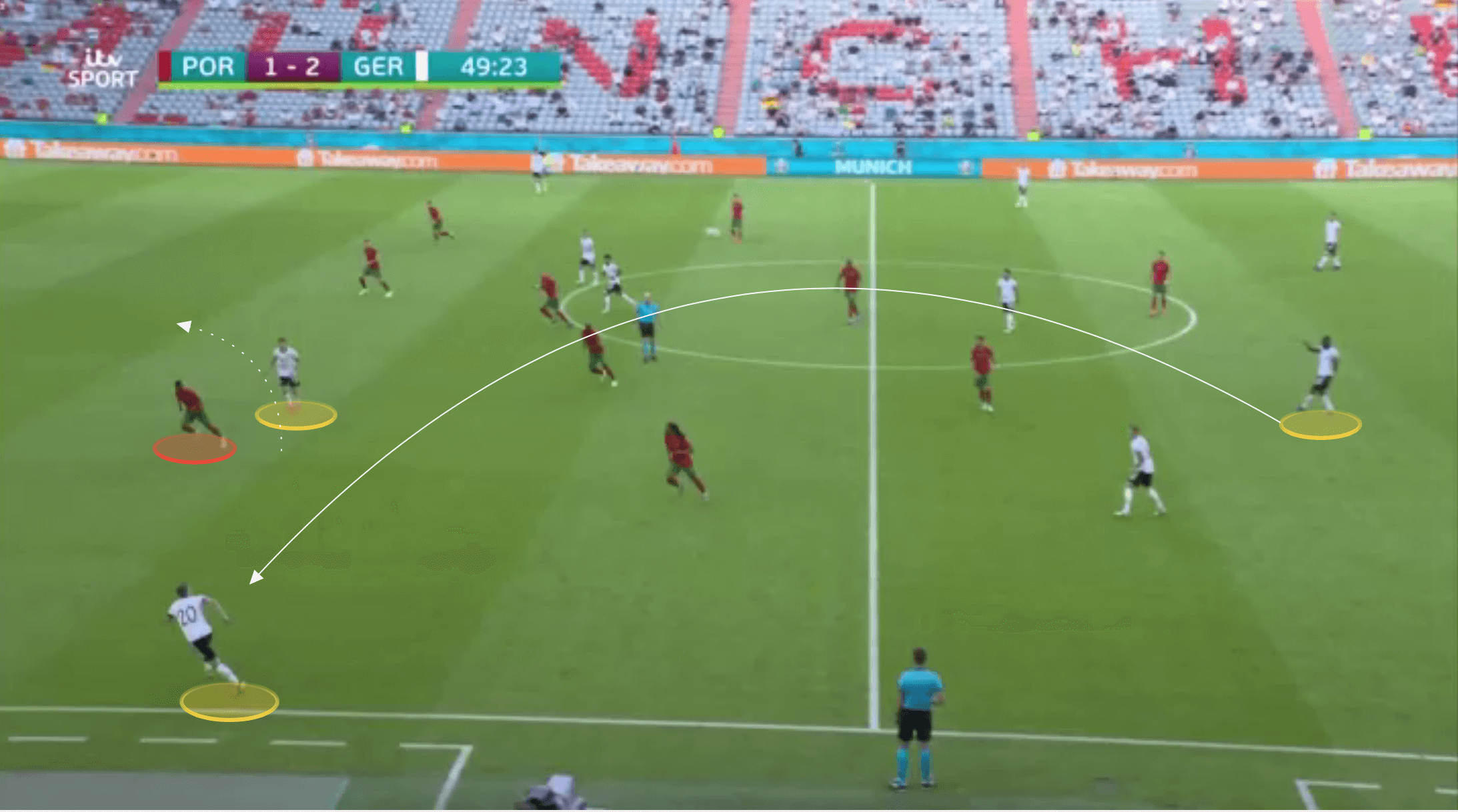 The result of this game, along with France’s draw to Hungary, means the final games in Group F will be very interesting to watch. Portugal looked dominant in their 3-0 win over Hungary, but this result and performance was a far cry from that game, whilst it was the opposite for the Germans. They looked void of ideas against the French and yet have bounced back from that result to put four past one of the tournament favourites. It’s too early to have any true insight into the direction of Euro 2020, but this game, along with the France-Hungary game, has certainly delayed us being able to truly predict the strongest teams emerging from Group F.