Euro 2020: Spain out, but Olmo and Pedri point to the future vs Italy – tactical analysis

Italy faced Spain at Wembley in what promised to be an epic semi-final at EURO 2020, and it did not disappoint, as we got arguably the best game of the tournament so far. Spain had a third straight game go to extra-time, and while they had prevailed on penalties against Switzerland in the quarter-finals, this time, the Azzurri held their nerve better to book their place back at Wembley on Sunday. Both sides had some interesting tactics on show, and in this tactical analysis piece, we will look at how both managers set their sides up and adapted as the game went on. 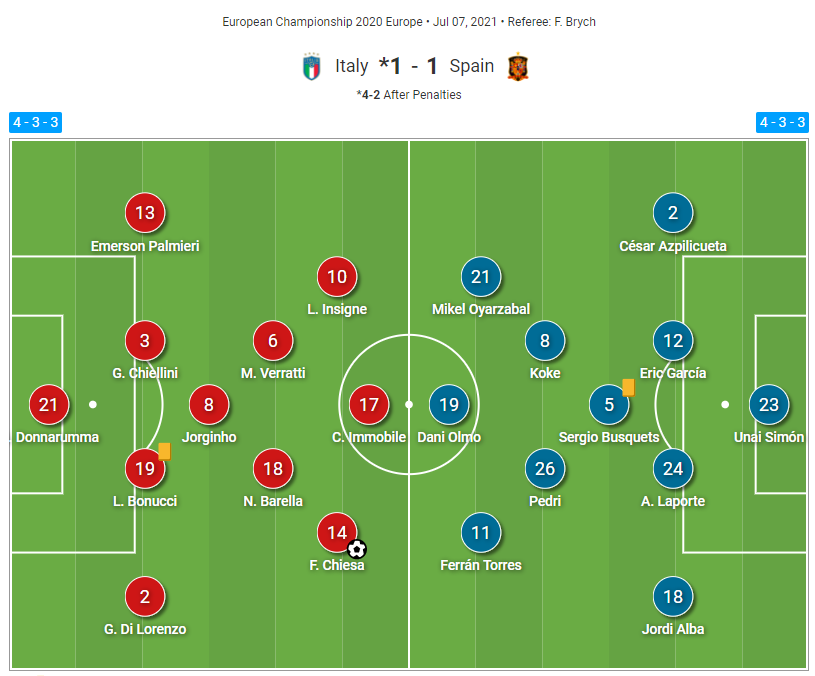 Roberto Mancini was forced into one change for this match, with Leonardo Spinazzola, who has been one of the players of EURO 2020 so far, suffering an Achilles tendon injury in Italy’s quarter-final win over Belgium, and so Emerson Palmieri came in at left-back to replace him. The rest of the side was as expected.

Luis Enrique also had an injury issue to deal with, as Pablo Sarabia was unable to recover in time for this game, with Dani Olmo replacing him. This was expected; what was unexpected was that Enrique dropped Alvaro Morata and played Mikel Oyarzabal instead, with Olmo operating as a false nine.

Spain completely dominated the first half of this match, and Dani Olmo was a big reason for this. With Georgio Chiellini and Leonardo Bonucci at the heart of the Italian defence, Enrique opted against using a traditional striker up front – instead, Olmo played as a roaming forward who was frequently dropping deep and playing in the half-spaces, in front of the Italian centre-backs. This meant that the two Italian centre-backs often did not have a direct opponent to mark, and one of them would have to step up to pick up Olmo or another Spanish player – something neither player is especially comfortable at. Olmo’s positioning also helped Spain create numerical overloads in midfield which allowed them to progress quite easily into the final third. 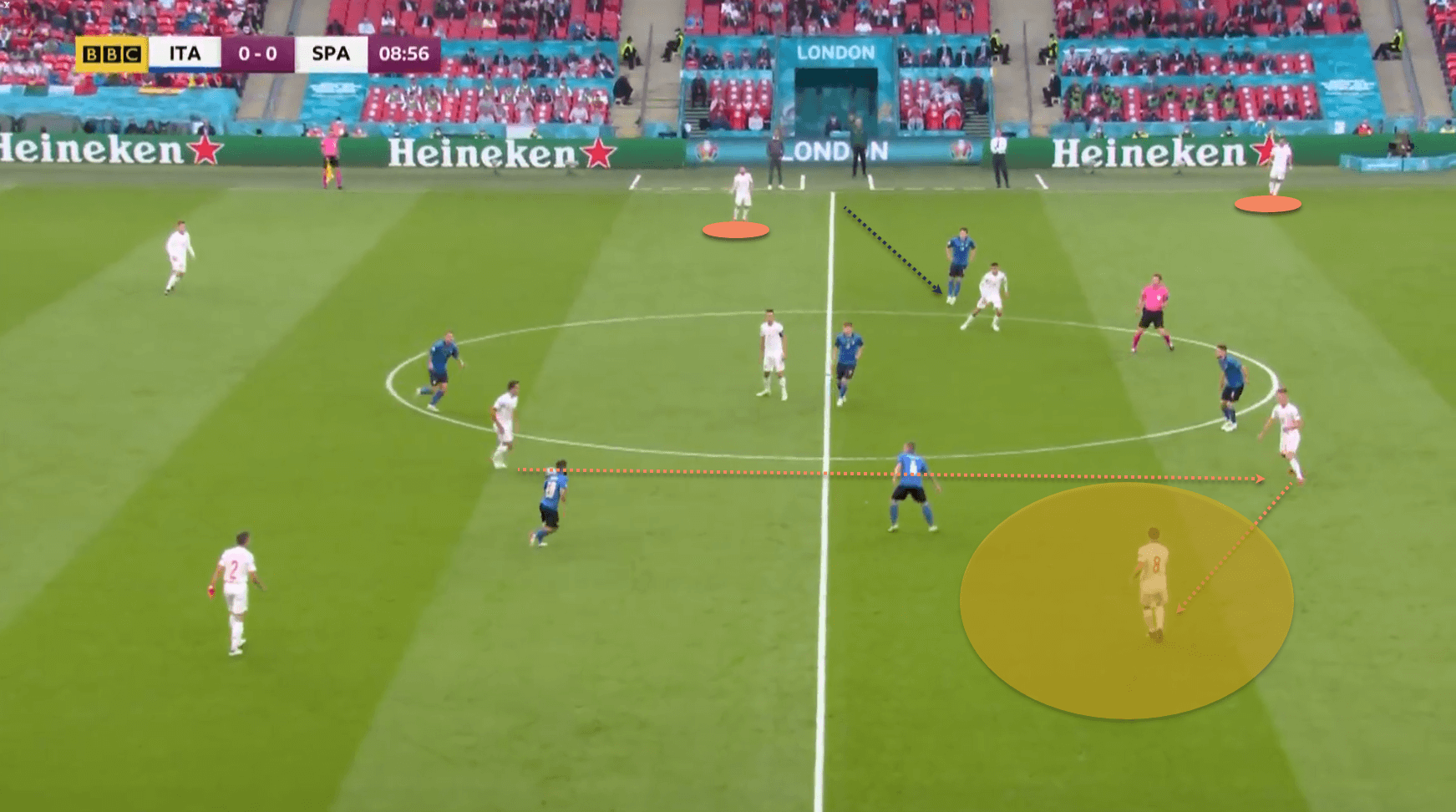 Here, Olmo drops off into midfield, and his presence means that Koke is unmarked, allowing him to receive possession easily when Olmo plays the ball to him after receiving it from Eric Garcia. Also note how Federico Chiesa has been drawn infield from the right flank to pick up Pedri here, as Spain would have a numerical overload in midfield instead – however, this has the effect of opening up space on the left for both Jordi Alba and Ferran Torres, another theme that would occur repeatedly throughout the match.

Olmo’s positioning caused Jorginho a lot of problems at the base of the Italian midfield. The Chelsea man would often be outnumbered 2v1 in this zone, and it was therefore quite easy for Spain to bypass him. 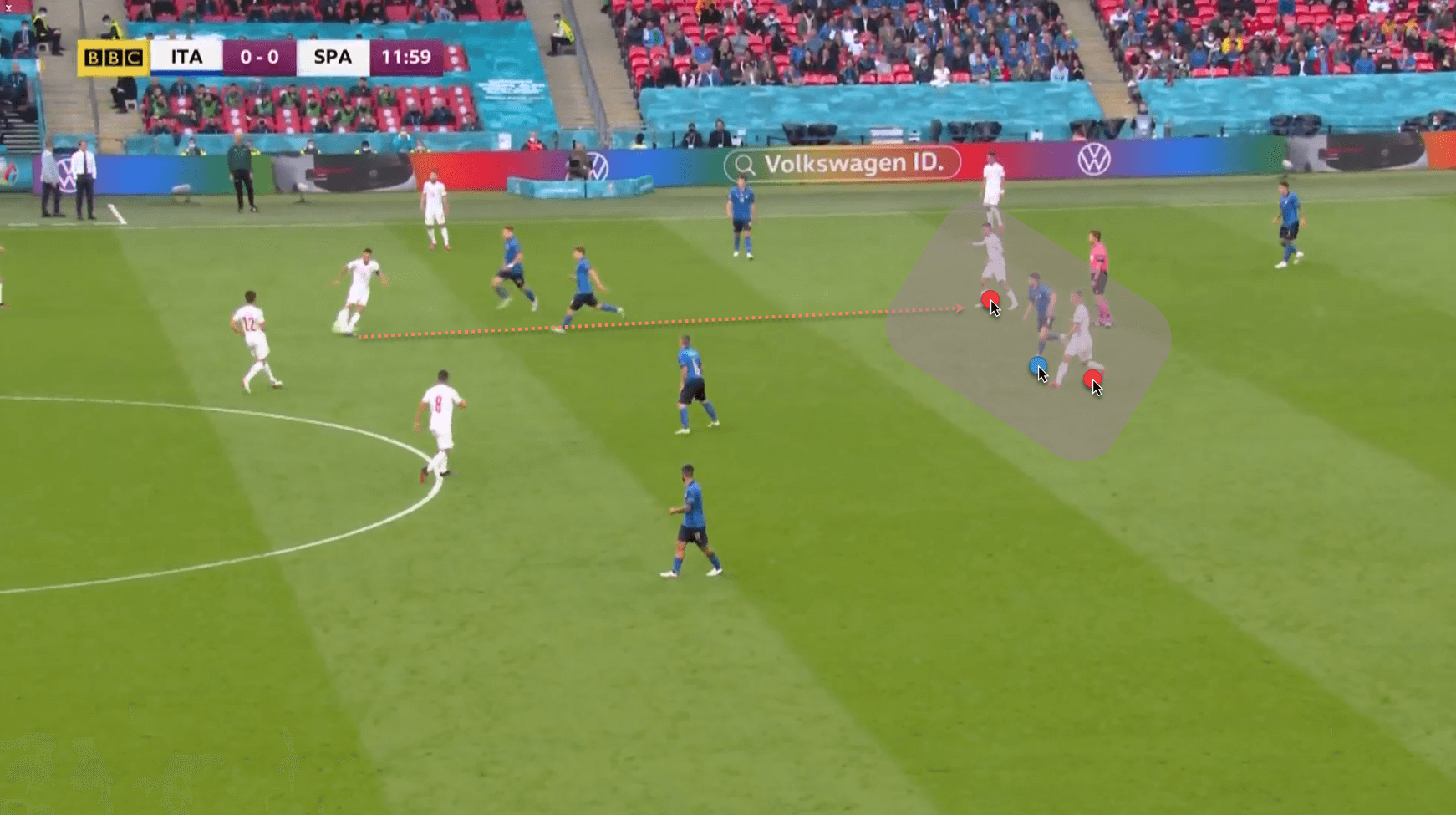 This is in the build-up to one of Spain’s best opportunities of the match – note how Olmo and Pedri are both in Jorginho’s zone here, overloading him and making it easy for Sergio Busquets to find either player with a pass through the lines – in this case Pedri, since Jorginho is closer to Olmo. 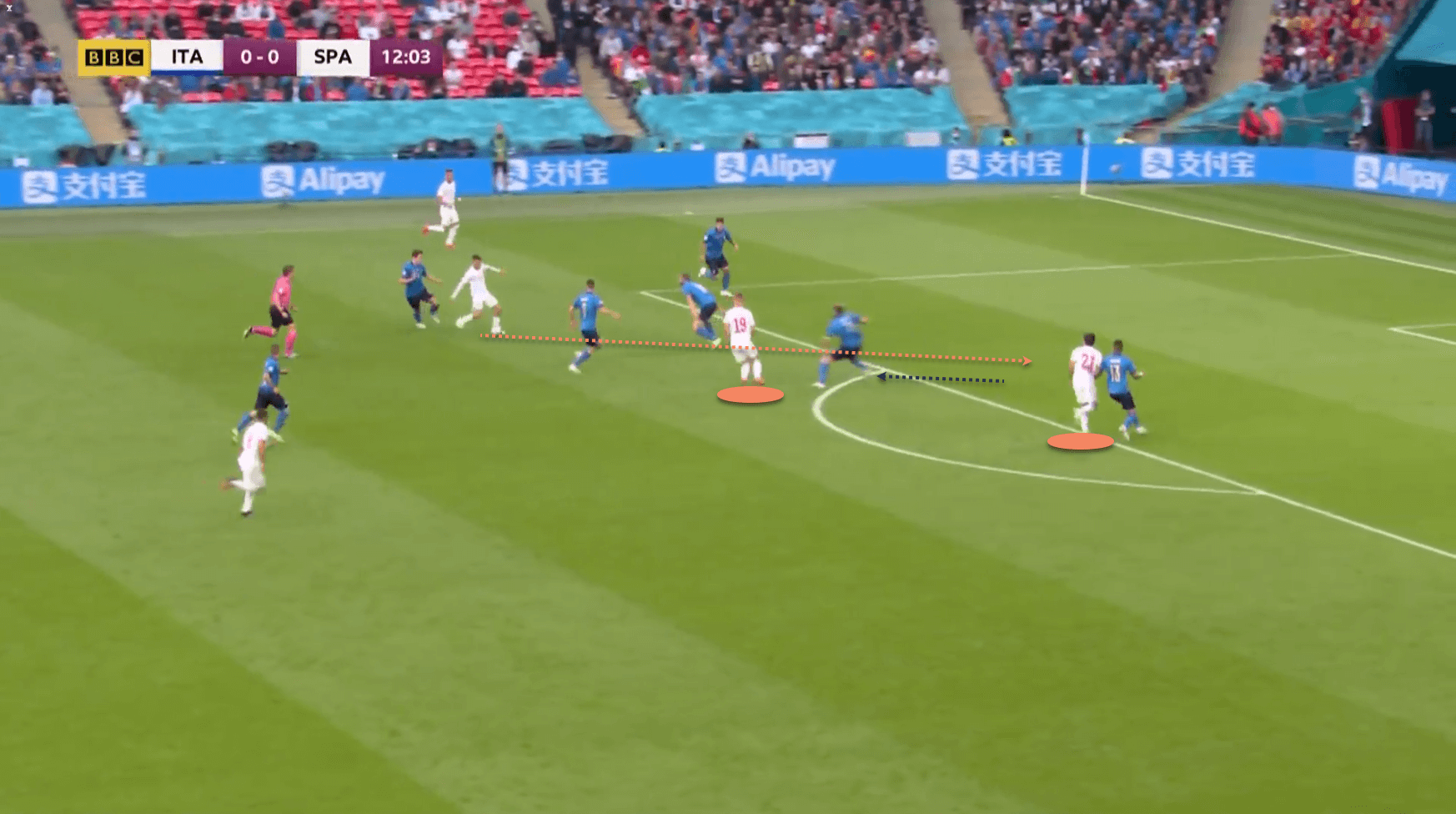 Pedri turns and runs forward, before delivering a superb ball into the box that Oyarzabal (running in from the right) fails to control. Olmo’s positioning is important here too – the RB Leipzig man’s presence draws Chiellini out just as Pedri looks to play the ball, which opens up that channel for the 18-year-old to make the pass. 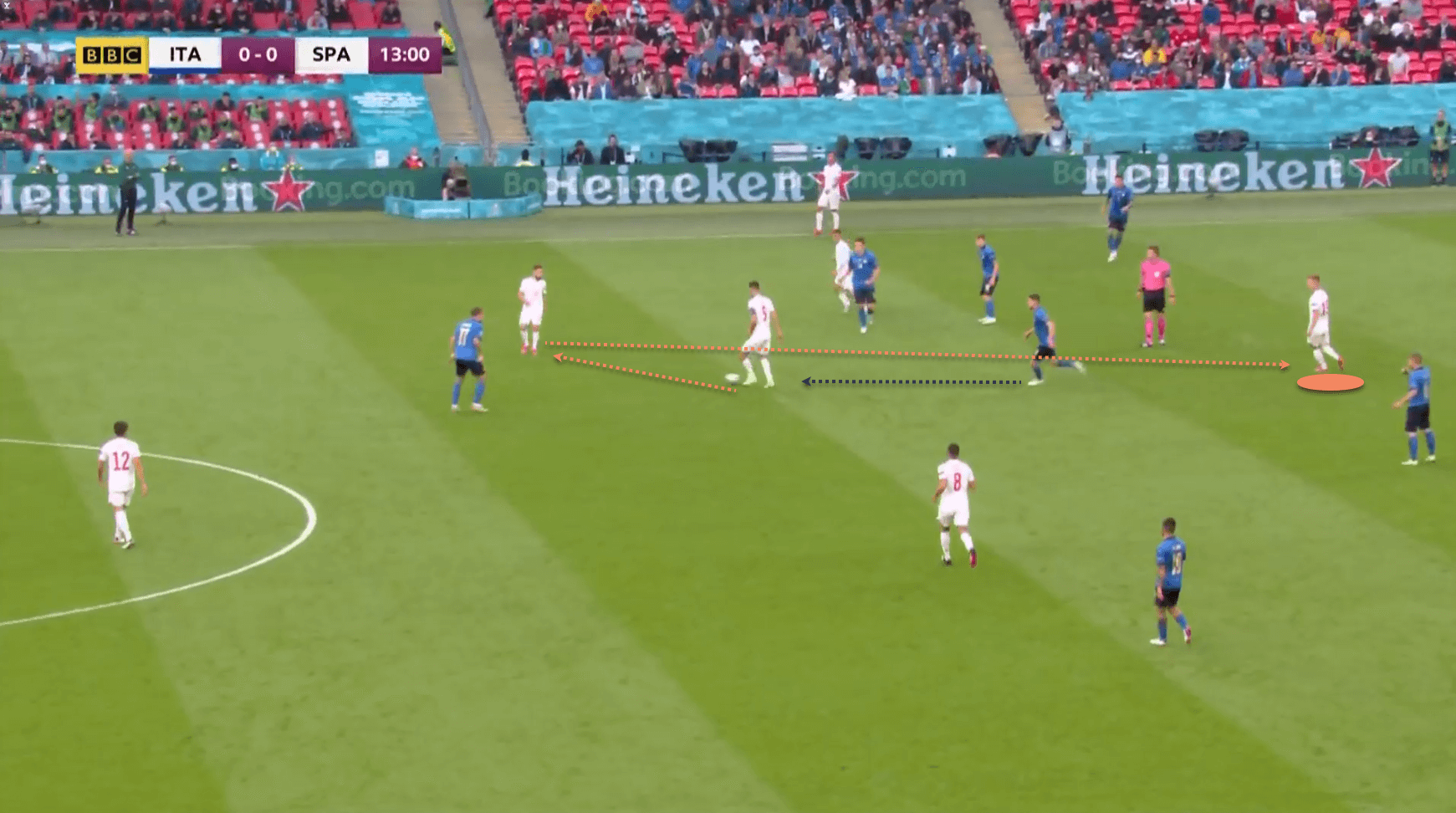 Another example of Jorginho being bypassed easily here – Alba moves infield after exchanging passes with Pedri, and having passed to Busquets, receives it back and then finds Olmo in space behind Jorginho, who is rushing forward to close Busquets down. 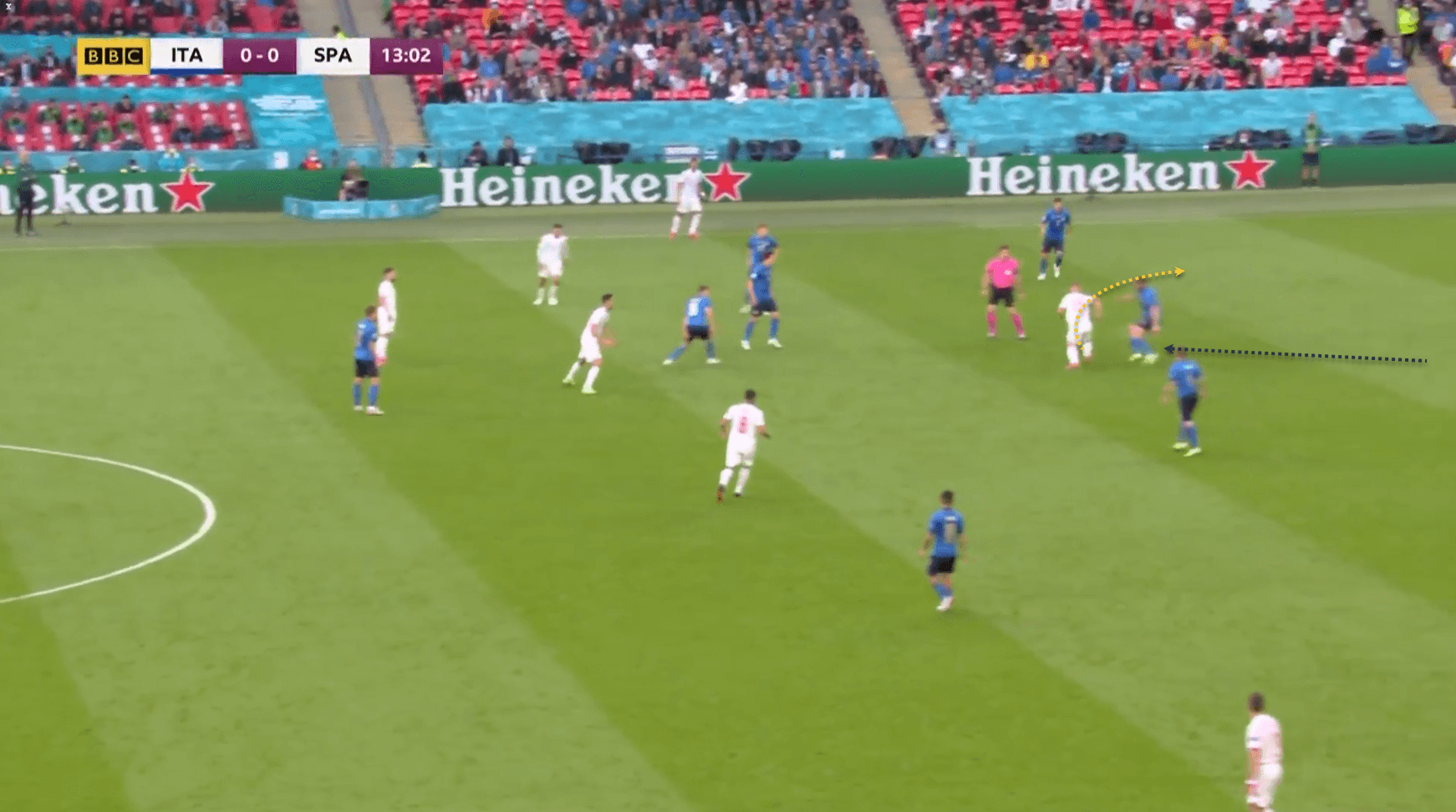 As Olmo receives possession, Bonucci is forced to step out and confront him, with the 23-year-old able to turn and get past him into space.

Olmo’s positioning caused Italy problems throughout the match, and he played his role perfectly in this regard, but he did struggle to have a direct impact in front of goal, adding to Spain’s general issue of being good at creating chances but poor at putting them away throughout EURO 2020.

Italy’s strategy of running in behind pays off eventually

In contrast to Spain, for whom their central striker dropped off the backline, Ciro Immobile constantly kept running in behind the Spanish defensive line. While this did not work too well initially – Immobile was caught offside twice within the first five minutes – it did show how Italy could threaten as the match went on, and was most notably seen in the Italian goal. 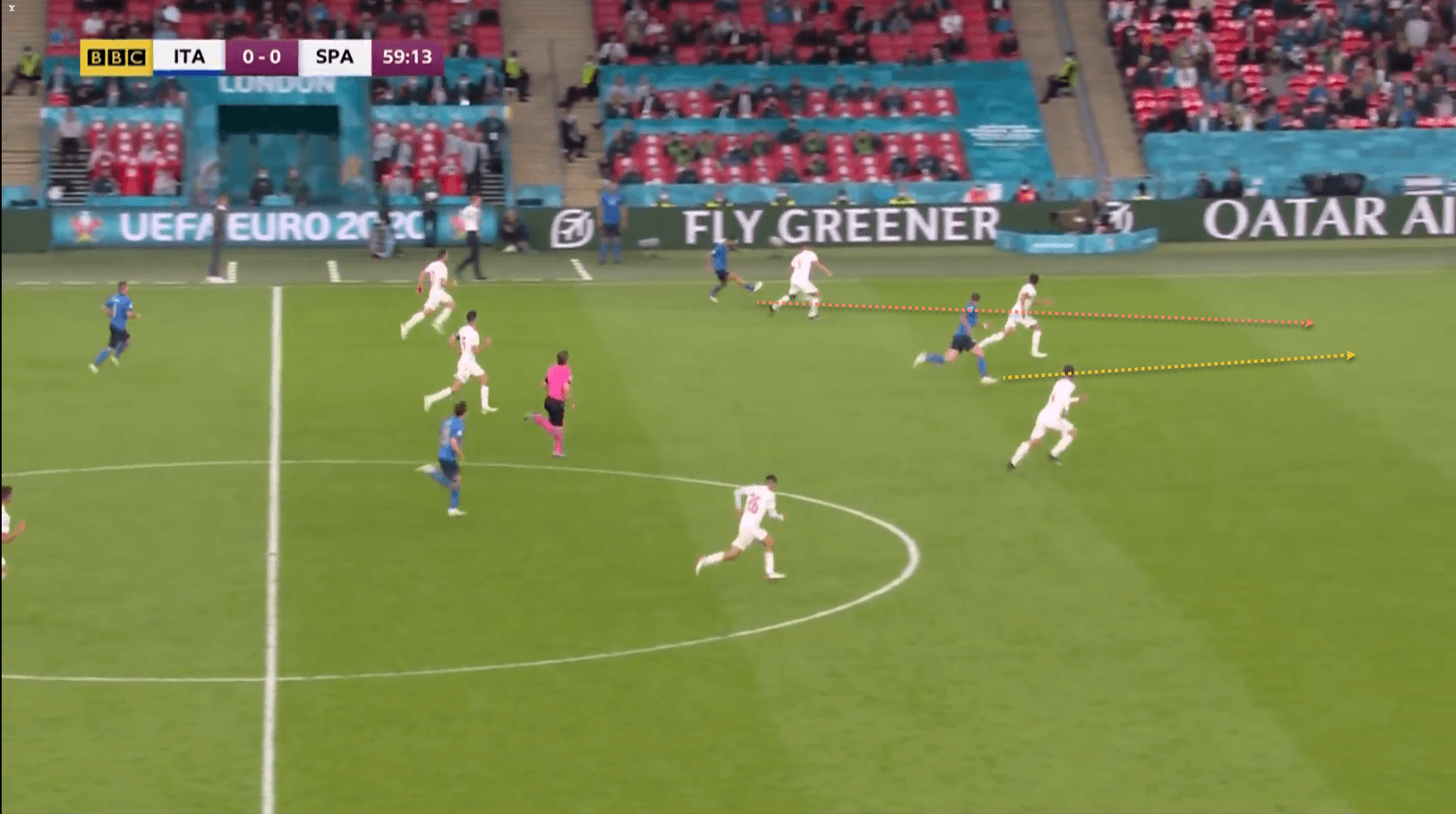 Morata goes from zero to hero to zero again

Spain’s saviour in this match, 10 minutes from time, was Alvaro Morata, who came off the bench to score their equalizer. He essentially did the same thing that Olmo was doing all match, dropping deep to create overloads in midfield before spinning in behind, but he crucially also had the finishing touch in front of goal, running onto Olmo’s lovely pass to place a left-footed finish past Gianluigi Donnarumma.

This was quite the redemption for Morata, who has endured a lot of criticism throughout EURO 2020, but of course, he would then go on to miss the decisive penalty in the shoot-out. Olmo missed his penalty as well, showing how penalty shoot-outs can be extremely random in that sense, where the best player of the match, and the player who scored the goal to bring the tie this far, both missed.

Italy are definitely deserved finalists at EURO 2020, based on their performances throughout the competition, even though Spain were the better side on the night and, as has been the story of their tournament, could have done much better with some more composure and quality in front of goal. Nevertheless, Luis Enrique has taken this side further than anyone would have thought, and with a young core based around the likes of Pedri, Olmo, Aymeric Laporte, Morata and more players coming through the ranks, they will definitely be a force to be reckoned with at the World Cup in 18 months time.

For the Azzurri, Mancini has had an even bigger transformative effect – they are unbeaten in 33 matches, and nobody would have picked them as finalists before EURO 2020 started. Italy will fancy their chances against England on Sunday, even with a partisan Wembley crowd against them, and it would be a triumph for the ages if they manage to prevail in the final.