EURO 2020: Why win against plucky Austria showed that Italy are not title contenders yet – tactical analysis

The Euro 2020 knockout rounds began on Saturday, with Wales falling short against Denmark, before Italy faced Austria in a game which looked, on paper, fairly straightforward, given the performances of both sides during the group stages. However, everything has a habit of being turned on its head when tournaments reach these rounds, and this game showed that.

In this tactical analysis, we will see how Italy struggled to match the same levels as they had in their group games, with poor passing and decision-making both notable features of their play. We will also see how Austria set up with counter-attacking tactics, making it difficult for Italy to break them down, and then attacked with pace when they got the ball. 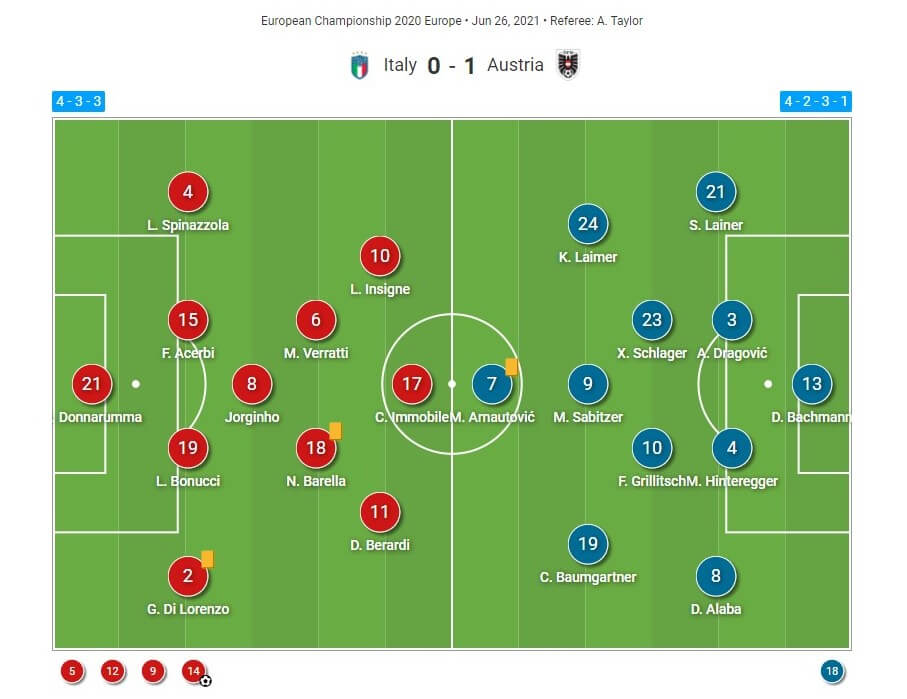 Italy reverted back to their first choice starting XI for this game, with plenty of squad players given opportunities in the Azzurri’s last game against Wales. Chelsea vice-captain Jorginho and PSG’s Marco Verratti kept their places in midfield, with Nicolo Barella returning to join them. In defence, Napoli’s Giovanni Di Lorenzo came in for Rafael Toloi at right-back, whilst Francesco Acerbi and Leonardo Spinazzola replaced Alessandro Bastoni and Emerson respectively. In attack, Federico Bernadeschi, Andrea Belotti and Federico Chiesa moved back to the bench, with the regular attacking trio of Domenico Berardi, Ciro Immobile and Lorenzo Insigne reclaiming their places on the pitch.

Austria, meanwhile, named the same 11 players who started their final group game against Ukraine. That meant that former Leicester City loanee Aleksandar Dragovic kept his place in the centre of defence, alongside Martin Hinteregger, whilst Real Madrid-bound David Alaba captained the side from left-back. Midfielder Xavier Schlager, who has impressed in the tournament so far, played as one of the defensive midfielders, whilst playmaker Marcel Sabitzer, who has been a big part of RB Leipzig’s rise in German football as their captain, again started behind former Stoke City and West Ham United forward Marko Arnautovic.

Many expected Italy to advance from this tie, given the level they had been playing at and the quality they had shown. However, as this analysis will demonstrate, there are still some rough edges to sort out as they continue to redevelop under former Manchester City and Inter Milan boss Roberto Mancini.

Italy looked to move the ball out to the wings as often as possible, using their wing-backs and wide forwards to get the ball into the box. However, in situations like this one, no players made runs into the box, instead remaining outside it and in front of the Austria defenders. This made it easy for Austria to defend against them, as they could watch Italy’s positioning and continually adjust their own structure to prevent runs into the box. Italy tended to pass backwards as a result, because that was the only way they could maintain possession, but it didn’t help them to shoot at goal.

When Italy did break through the defence, their final pass often let them down, and there were numerous occasions where they needed more quality in the open spaces during this game. Punishing teams who leave spaces open is something they have been good at, but they seemed to have lost that confidence here.

Defensively, they didn’t seem to be as well-organised either. Here, we see the build-up to Marko Arnautovic’s ruled-out goal, and, initially, it looks like they have covered him and stopped any potential shot being taken. However, Arnautovic has found a gap and moves through it, as the red arrow illustrates, with Italy momentarily losing their concentration, and only the offside flag let them off here. It was good play from Austria to create the chance, but Italy would not have been happy with the way they allowed Arnautovic to get behind them so easily.

Some of Italy’s struggles in this game were not necessarily due to their lack of quality. Here, we see how they have four attackers positioned outside the box, looking to receive the ball and shoot at goal. However, they are surrounded by Austrian players, whilst the ball is being closed down by another Austrian player on the far side wing. As that defender is positioned between the ball and the central attackers, he has prevented Italy from transferring the ball into the middle. As a result, Italy can only move the ball backwards, ending the attacking opportunity.

This section has shown some of the reasons why Italy struggled to break Austria down for 90 minutes during this game, with some of their play not being adventurous enough, making it easy for Austria to keep them out. Once Manuel Locatelli and Federico Chiesa came on in the second half, Italy began to ask more questions, and looked increasingly confident after their goals in extra-time. However, the fact that it took them that long to really pose a threat will give Roberto Mancini some concerns.

Austria were not expected by many to advance from this tie, but they looked to stay in the game as long as possible, whilst also creating their own goalscoring opportunities, and their tactics revolved around that theme.

When out of possession, they were compact defensively, making it hard for Italy to break through the middle of them. We see here how the defence is running backwards, but all four players are working together to ensure that no gaps are left open for Italy to exploit. As the defence was narrowly structured, they were able to drift across the pitch as needed, depending on where the ball was.

In the first half, Italy were forced to shoot from long distances, which decreased their accuracy in the final third. However, this was more down to the way they were being manipulated by the Austrian players, who were controlling these situations with their robust defensive shape.

Austria didn’t just look to stay back and defend, but counter-attacked as soon as they had the ball. In this image, we can see how they made the pitch as big as possible when in possession, always looking to move the ball into the attackers as quickly as possible. They mainly used the wings to do this, and it was a common sight to see full-backs Stefan Lainer and David Alaba in advanced positions as a result.

It is also notable that they made the pitch as big as possible when in possession, which made it harder for Italy to win the ball back. If any Austrian player was closed down, the ball was simply passed along the line, with Austria happy to be patient and wait for the right opportunity to attack forwards. Therefore, their counter-attack was very effective throughout the first half, and a key reason for them staying in the game longer than most thought they would.

As well as the full-backs’ advances, it was also common to see the attackers dropping back to pick up the ball in the midfield. What was crucial about this was that, when they did come short, others ran forward to give them passing options in forward areas, and this image shows that happening. Again, Austria are trying to keep the pitch as big as possible, making it harder for Italy to surround them.

In the second half, Austria didn’t counter-attack so often, and instead looked to frustrate Italy and keep them away from their goal.

The majority of the Austrian team are set up in three lines here, pushing Italy as far back as possible. Italy’s full-backs constantly advanced up the pitch during the game, allowing Insigne and Berardi to cut inside as often as possible, but this didn’t work as well for them in the second half, as they couldn’t pass forwards as often. Instead, they were forced to play sideways, with Spinazzola finding Di Lorenzo with a cross field ball here, as the blue arrow shows. Italy do have options in the middle, but the low block meant that those players were cut off from each other, so the attack would have likely broken down by playing into them.

This defensive organisation was largely down to the centre-backs, who dictated play and made plenty of clearances whenever Italy did send a ball into the box. Hinteregger, in the red circle, was particularly important in this, as he always saw the danger and won the ball before any Italian player reached it. In this regard, the Eintracht Frankfurt centre-back was one of Austria’s best players on the field, playing his part in Italy not having too many clear-cut opportunities to score.

Austria’s formation was fluid as well, with players allowed to move out of line and close the ball down, as is happening here. This is particularly important when there was a sizeable space between the Austria defence and midfield, as Italy would have had space and time there to launch an attack. However, by closing the ball down, they forced Italy to turn and retreat, rather than finding the spaces further forward. This again shows how Austria were aware of their surroundings throughout the game.

In conclusion, we have seen in this tactical analysis that, whilst Italy won the game, there are plenty of things that will have concerned them about their performance. After their group stage games, many tipped them as having an outside chance of reaching the latter stages of the tournament, but their struggles and poor composure show that they are not a finished product yet. Austria will be pleased with their performance, despite being knocked out of the tournament, and have shown other teams how to stop Italy’s feared attack. It will now be interesting to see how Belgium look to play against them tactically in the next round.