How did ten-man Ajax beat PSV and stay in the title race?

Ajax and PSV Eindhoven have been battling each other for the Eredivisie top spot throughout the season, so this game was one of great importance for both teams. When it comes to their form leading up to this game, PSV have been slightly more consistent having lost just once in 26 games. Meanwhile Ajax, probably because of their Champions League efforts, have suffered four defeats which let their rivals go five points clear at the top.

Ajax desperately needed to win the derby, otherwise they risked staying out of the title race, while PSV had the pressure of holding on to first place. In a game full of challenges for both sides, Erik ten Hag managed to switch between formations and get the best out of his 10-man team (due to Mazraoui seeing red) and celebrate a 3-1 win over the Eindhoven side.

Although PSV stayed strong until the end, a series of individual mistakes was the reason behind their hesitant performance. But let’s see how both managers tried to outplay each other in what turned to be one of the most important games this season. 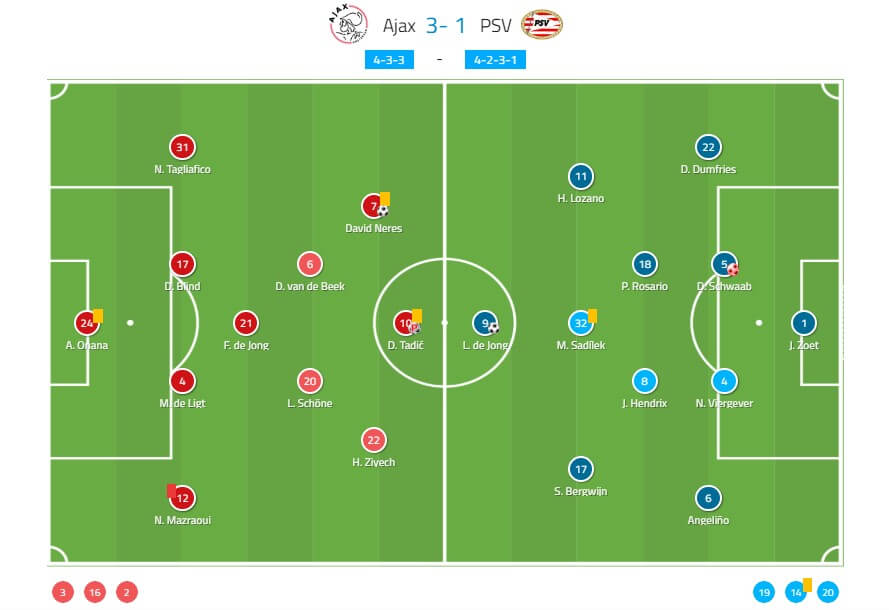 Erik ten Hag chose a 4-1-2-3 formation initially but little did he know that he would be forced to switch to a couple of different ones to be able to keep a positive result. In front of André Onana was the four-man defence including Noussair Mazraoui, Matthijs de Ligt, Daley Blind and Nicolás Tagliafico. As per usual, the midfield was formed by Frenkie de Jong, Donny van de Beek and Lasse Schöne. Up front, Erik den Tag relied on Dušan Tadić at the tip of the attack and Hakim Ziyech and David Neres on the right and left wings respectively.

There weren’t any surprises in Mark van Bommel choosing a 4-2-3-1 scheme. Jeroen Zoet was the keeper with Denzel Dumfries, Daniel Schwaab, Nick Viergever and Angeliño protecting him. Pablo Rosario and Jorrit Hendrix were positioned at the base of the midfield, whilst Michal Sadílek was operating in front of them. Steven Bergwijn and Hirving Lozano were positioned on the sides, while Luuk de Jong was used as the lone striker.

Ajax felt comfortable using the 4-3-3 formation during the first half as it was enough for them to keep the 1-0 lead which Daniel Schwaab gifted them with his own goal. It was a dynamic game with both teams struggling in terms of passing accuracy and holding on to the ball for long periods of time. There were loads of chances for both sides but each of them struggled to find the perfect finish.

PSV tried to overload their own half when out of possession, blocking the central passing lanes and limiting the space in which Van de Beek and De Jong could operate in. Although this structure helped on a few occasions it didn’t look like a real solution to stopping Ajax’s attacking ventures.

De Godenzonen were forced to spread out to the wings in an attempt to reach the final third. Just short of 90% of their attacks were built up through the middle, but as PSV located the danger straight away these weren’t the areas in which the hosts created their most dangerous goal opportunities.

In fact, being forced to use the wings did them a favour as their pace was hard to be outplayed. Using Ziyech turned out to be the right formula in the 21st minute as after receiving the ball he sent a perfectly measured cross to Tadić.

The Serbian used his outstanding attacking flair and off-the-ball abilities to sneak behind Schwaab’s back. The ball didn’t even reach Tadić due to a miscommunication between Schwaab and Zoet as the defender sent the ball in his own net.

Although it was an own goal the credit should be given to Ajax’s attacking versatility, as their actions would often force the defenders into individual mistakes.

Ajax would often try to build up from the back using long balls. They regularly ended up at Tadić’s feet as he would drop back in the central areas to receive the ball.

The player who ran the show, though, was Frenkie de Jong. His outstanding passing abilities were the reason for most of Ajax’s successful actions in the opposition half. He distributed the ball all over the place and sought open spaces to exploit. He ended up with 76% (76/100) of his actions and 94% of his passes being successful. No other player reached such a high success level in the game.

For proof of how immense his impact on the team’s performance was, look at the top five passing links for Ajax against PSV. He was at the centre of the actions as he helped hold on to the ball but also contribute to the build-up phase and distribute it to the final third. He actually sent nine passes to the final third with 100% accuracy.

It all worked well for them until the 57th minute when Mazraoui eventually saw red for a scary challenge on Angeliño. This immediately affected both side’s actions. A minute later, whilst Ajax were still trying to set a proper defensive structure when out of possession, PSV equalised. Thanks to a quality cross by Angeliño and a little help by Onana’s poor decision-making, Luuk de Jong scored a fantastic header to make it 1-1.

This forced some emergency actions by Erik ten Hag to switch to a 4-1-3-1 by taking off Lasse Schone in favour of Joël Veltman. This found Veltman at right-back with Ziyech and Neres dropping back to more midfield roles.

Ten-man Ajax didn’t stop their efforts and later on, it paid off. After using the video assistant the referee called a penalty kick for a foul against Neres. Dušan Tadić was unshakable from spot and made it 2-1 leaving the goalkeeper with no chance to react. In the final stages of the game, Ten Hag switched to 5-3-1 in order to keep the result. After a well-crafted team effort in added time, Neres made it 3-1.

Eindhoven were positioned in a 4-2-1-3 formation in order to use the full-backs as an attacking force when in possession. They managed to implement their strategy of using the flanks to attack, as most of their dangerous actions in the final third came from the wings. Although they used the left-hand side more often it turned out that their best chances came from challenges on the right.

As it happened with the attack for the equaliser Angeliño would go up the pitch all the time and cross. He became one of the most active players after Ajax took the lead again. Eight of the team’s 13 crosses were his.

The other player responsible for PSV keeping the possession and actually having these opportunities in the final third was Rosario. The 22-year-old sent 19 passes to the final third, which is an unbelievable effort. Even more impressive is that 15 of them were accurate.

As can be seen from the image below, similar to Frenkie de Jong, Rosario was the linking unit of the team.

When Ajax were applying a higher press, Luuk de Jong would drop back to receive long balls from the goalkeeper. The team eventually switched to 4-1-4-1 in the final stages of the game, but that didn’t help them to find the net.

The title race is back at its best as now there is only a two-point difference between PSV Eindhoven and Ajax. The challengers have some very important games until the end of the season and need to play to their potential as there is no room for mistakes for either side.

Ajax have the tough challenge to not only chase their rivals in the league but also keep the highest level of performance in the Champions League where they will meet Juventus. This is the moment for Ajax to get the most out of Frenkie de Jong’s last days at Johan Cruyff Arena before joining Barcelona and use him as a boost on the road to their first title since 2014.