Cristiano Ronaldo has started to gather some pace with his goalscoring and it was his double away at Empoli that stretched Juventus‘ lead at the top to six points. This tactical analysis looks at the trends of the game. Empoli impressed in the first half and caused Juve some trouble, but in the end the Bianconeri thoroughly deserved the win.

Empoli are interesting this season as they are the only Serie A side consistently using a 4-3-2-1 formation. They started the season in a 4-3-1-2 but has moved to the Christmas Tree formation in recent weeks. Their starting eleven included the interesting front-three of Slovenian Miha Zajc and Bosnian Rade Krunic behind striker Francesco Caputo.

Juventus continued with the striker-less formation which helped defeat Manchester United in midweek. The fluid front-three on this occasion was Cristiano Ronaldo, Paulo Dybala and Federico Bernardeschi while Rodrigo Bentancur continued in central midfield.

Let’s take a look at how Empoli approached the game and how Juventus overcame their opponents.

Empoli’s 4-3-2-1 is naturally a very centred formation. The back-four is protected by three central midfielders and two attacking midfielders playing behind a sole striker. You can see the setup in the image below. The focus was very clearly to prevent Juventus from progressing through the centre of the pitch. The 4-3-2-1 gives natural protection of the half-spaces and the centre while leaving the flanks free. 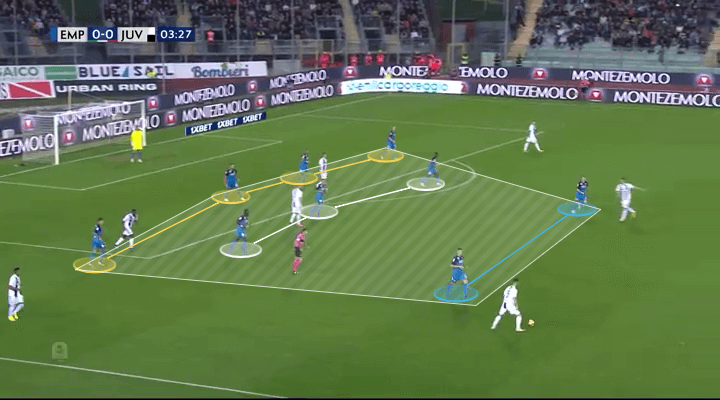 Empoli tried to make it very tight in central areas and force Juventus into the wide spaces. Below is a great example of how compact they were centrally. The midfield three is well connected to the two attacking midfielders. Juventus themselves chose to attack very narrowly with their front-three which made the centre of the pitch extremely congested. This suited Empoli as they blocked the central progression Juve sought. 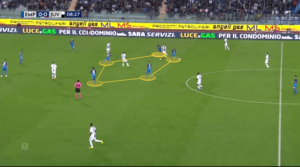 Empoli also engaged in some high-pressing at times. Knowing that Juve always try to play out from the back, Empoli’s front-three started high but allowed the first pass to be played from Szczesny. They then moved into a high-press against the two central defenders Rugani and Bonucci. Below is one example as Caputo and Acquah press Bonucci. The right-back Di Lorenzo joins the press and sprints forward to press left-back Alex Sandro with Krunic covering both the full-back and Acquah. 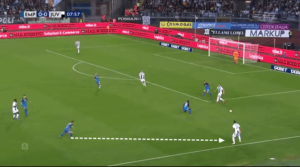 Empoli’s defensive approach made it difficult for Juve, but as we’ll see, Juve had the right tools to take the initiative anyway.

In attack, Empoli’s aim is to find their two creative Balkan attacking midfielders as often as possible. Below we see an example of where Zajc and Krunic position themselves in possession. They always looked for space behind Juventus’ midfield. This meant the midfield three of Acquah, the excellent Bennacer and Traore initiated the attacking play and looked to move the ball into the attackers. The full-backs Di Lorenzo and Antonelli were always providing width down the flanks. 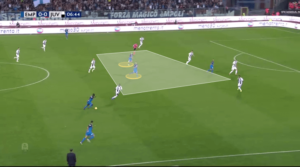 One area Empoli consistently looked to exploit was the space between Bonucci and Alex Sandro. They had clearly identified a weakness here, probably due to Bonucci preference to stay centrally as a right-footer playing as a left-sided centre-back. Krunic or Caputo would repeatedly make runs into this space. 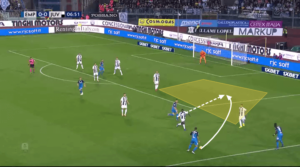 As the shape is so narrow, space will often be in the wide areas. This is where the full-backs are critical. With the front-three operating closely in the centre they need someone to stretch the opponent’s defensive line. This leads to the full-backs bombing on down the flanks in attack. In the below image you can see how Empoli’s right-back Di Lorenzo puts in a cross towards the front-three in the middle. 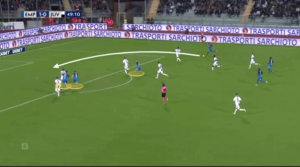 Empoli should also be praised for really trying to play football. They haven’t gotten the results yet as they find themselves in 18th. But they seem to believe they’ll get enough points playing their way. Against Juventus, they tried to play out of Juve’s man-orientated press time and time again. Below is a perfect example as Juve mark all of Empoli’s players closest to the ball. The right-back Di Lorenzo, however, is unmarked and the goalkeeper chips the ball into him. As the game went on Juve won the ball back quicker but I like the fact they believe in their way of playing and continues despite facing the toughest opponent in Italy. 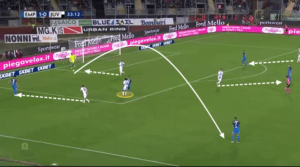 Due to Empoli being so narrow Juve needed to use the wide areas well to create chances and pressure. Juve did this by pushing their full-backs higher up the pitch. Particularly this was true of the positioning of left-back Alex Sandro. The Brazilian played as a left-winger and was a constant threat for Empoli’s defence. The below image is a good example of how Juve used Alex Sandro to stretch Empoli. The Brazilian has just received a crossfield-pass. Empoli’s right-back Di Lorenzo (blue) tries to get out but is too late. The right-sided central midfielder Acquah (red) is not close enough to give cover and Sandro dribbles past his opponent and delivers a dangerous cross. This was the downside with Empoli’s defensive approach. 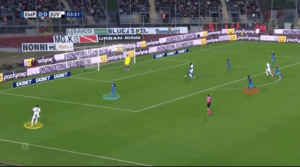 As mentioned, Juve used their midfield-three and front-three in very narrow positions to force Empoli to centre even further. Thus situations like above appeared quite often. With the 1vs1 ability of Alex Sandro, they were a constant threat down the left. Empoli also had some difficulties in dealing with the crosses that came flying in and Juve built pressure and created plenty of chances despite leaving it late to win it.

Defensively, Juve pressed Empoli with clear man-orientations. We can see this clearly in the below image as they look to press Empoli high. This disturbed Empoli’s build-up play and helped Juve recover the ball quickly as Empoli struggled to deal with the man-orientated pressing. 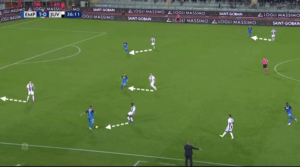 When defending deeper, Juve settled into a 4-4-1-1 shape with Bernardeschi as the right-sided midfield and Matuidi on the left. 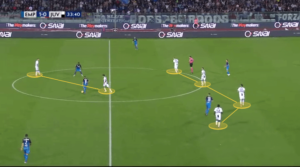 Juventus dominated the game and should have scored earlier but a very soft penalty and a Ronaldo thunderbolt was enough to win the game 2-1.

Juventus were comfortably the better side and deserved the victory but Empoli made it difficult for them. However, the Tuscans remain in the bottom three ahead of a daunting trip to Napoli. Juventus stretched their lead at Serie A’s summit to six points and look on course for another title defence. Can anyone keep their pace?