Two clubs who have endured underwhelming starts to the season went head-to-head on Sunday, as Brentford hosted Preston North End. The much-fancied Bees, who were playoff finalists last season, had only picked up four points before this clash. Preston were winless heading into their first-ever visit to the new Brentford Community Stadium.

And at half time, it seemed inevitable that North End’s winless start to the season would be extended to four matches. Two first-half goals from Brentford’s Ivan Toney saw them race into a 2-0 lead, which was harsh on Alex Neil’s men. However, his side rallied after the break to produce a stunning comeback. Scott Sinclair pulled one back after 53 minutes, and just seven minutes later the former Manchester City and Celtic winger produced the equaliser.

Brad Potts completed the turnaround three minutes later before Sean Maguire added some gloss to the scoreline. Four goals in 18 second-half minutes for a spirited Preston side, who ran out 4-2 winners.

This tactical analysis will delve into the tactics that both teams used. 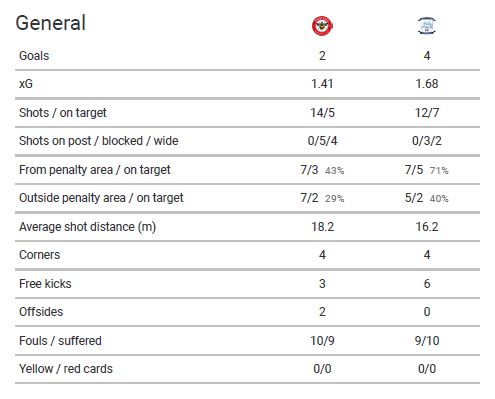 Thomas Frank started with Luke Daniels in goal, due to the continued absence of number one David Raya. Henrik Dalsgaard featured at right-back, with Dominic Thompson on the other side. Ethan Pinnock partnered Pontus Jansson at centre-back. Danish international Christian Norgaard started just in front of the defence, but he was replaced by compatriot Matias Jensen after suffering an injury 20 minutes in. Josh Da Silva and Emiliano Marcondes were the more advanced central midfielders. Sergi Canos and Bryan Mbeumo supported striker Ivan Toney from the flanks. There was no starting berth for Said Benrahma, but he did feature from the bench. 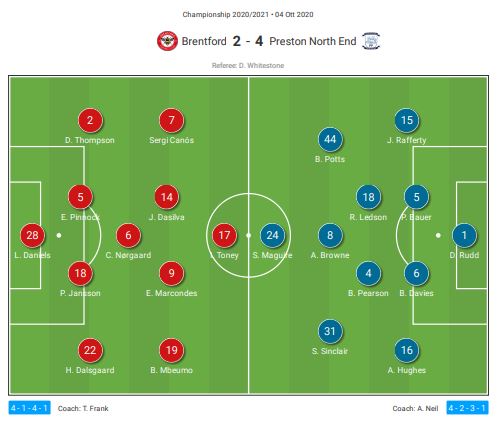 Declan Rudd started in between the sticks for the Lilywhites, behind the central defensive pairing of Patrick Bauer and Ben Davies. Joe Rafferty and Andrew Hughes were handed starts in the full-back positions. Ryan Ledson and Ben Pearson played in a double pivot in front of them, with Alan Browne starting as the attacking midfielder. Scott Sinclair and Brad Potts began at the side of him, behind lone striker Sean Maguire.

Brentford’s attacking play and the role of Josh Da Silva

Make no mistake, this was far from a vintage Brentford attacking performance. Even though they were 2-0 up after 40 minutes, it wasn’t like Preston’s goal was under siege throughout the first period. Frank’s side just demonstrated a bit more individual quality in attacking areas. In particular, the role of central midfielder Josh Da Silva was key to most of Brentford’s good attacking play throughout the contest. In his role as an advanced number eight, he’s given license to get in between the lines of the opposition’s defence and midfield. Da Silva often operates in half-spaces. In the image below, he’s ready to receive the ball in the half-space and between the lines of the opposition. 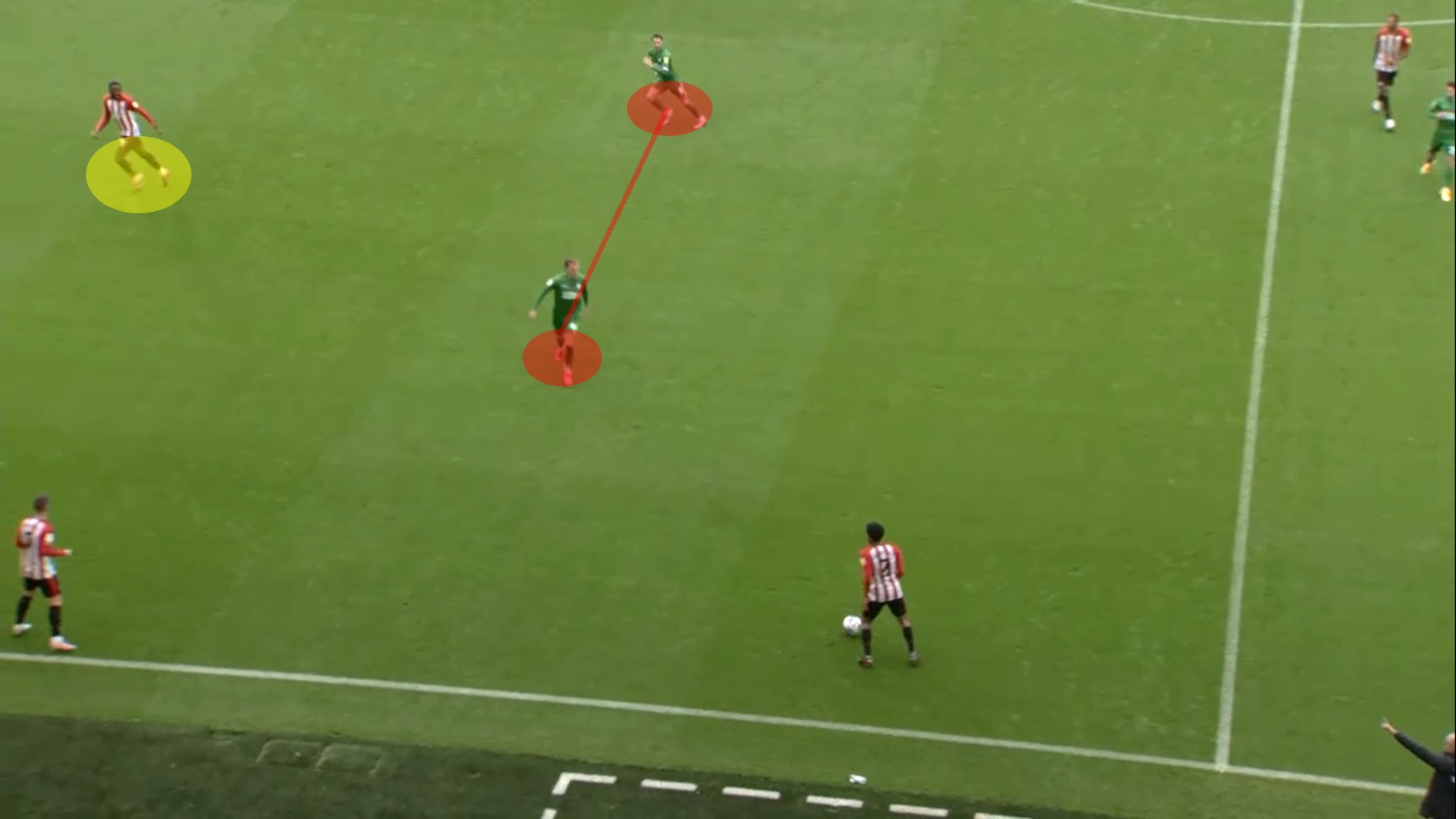 Players are often harder to pick up in these positions. As Da Silva is behind a Preston midfield who are facing forwards, he’s on the blindside of them so it’s hard for them to mark him. But if a defender pushes out to engage, he’ll leave space behind him for the Bees star to play the pass in behind. The 21-year-old takes the ball out to the left flank, before hitting a perfect pullback to Ivan Toney who puts Brentford 1-0 up. 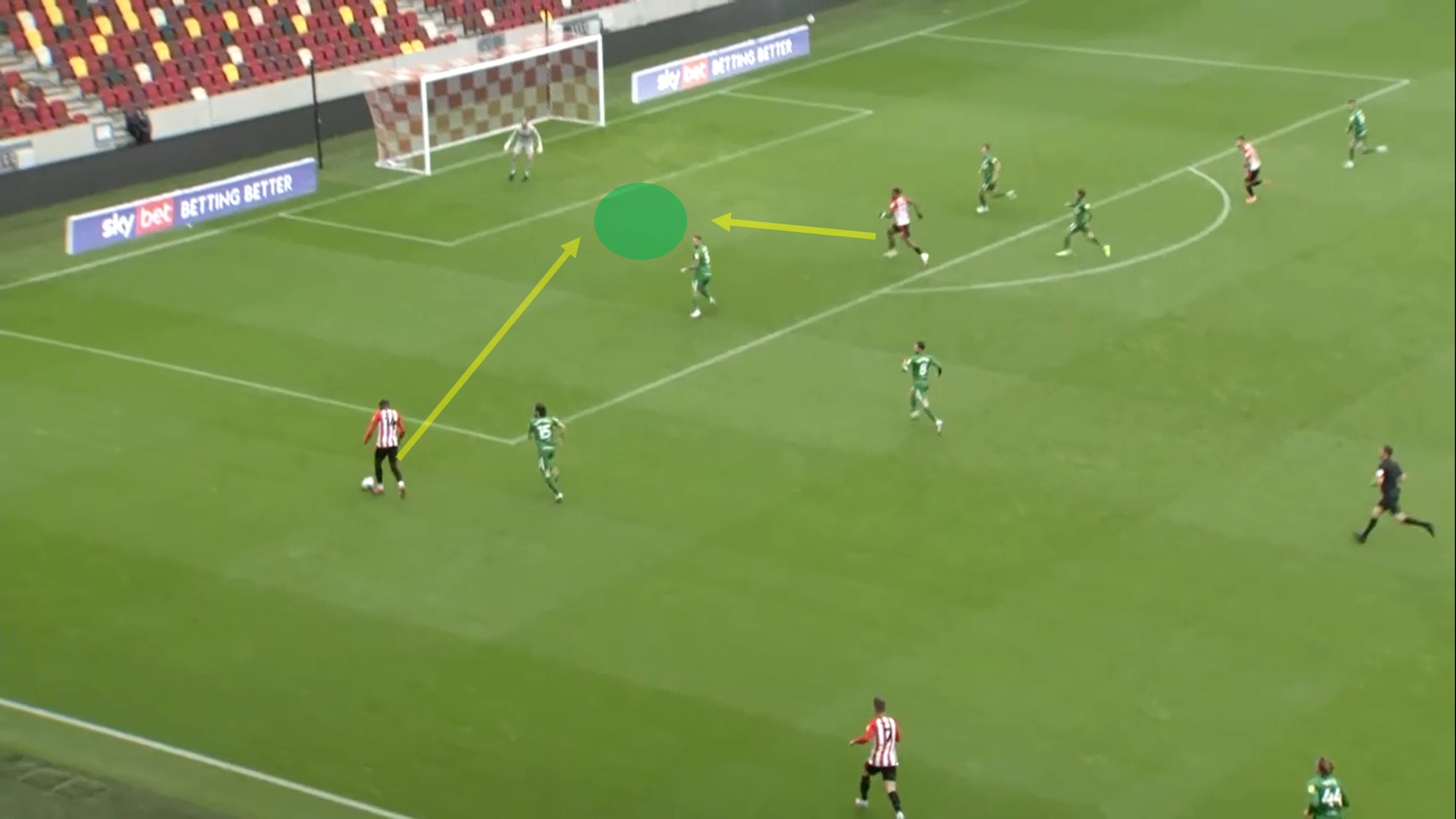 Positional rotation is central to the way Brentford like to attack, and in certain moments of the game, they did show the dangerous fluidity that makes them hard to defend against. In the image below, striker Toney drops deep to receive possession from centre-back Ethan Pinnock, before laying the ball back to Norgaard. 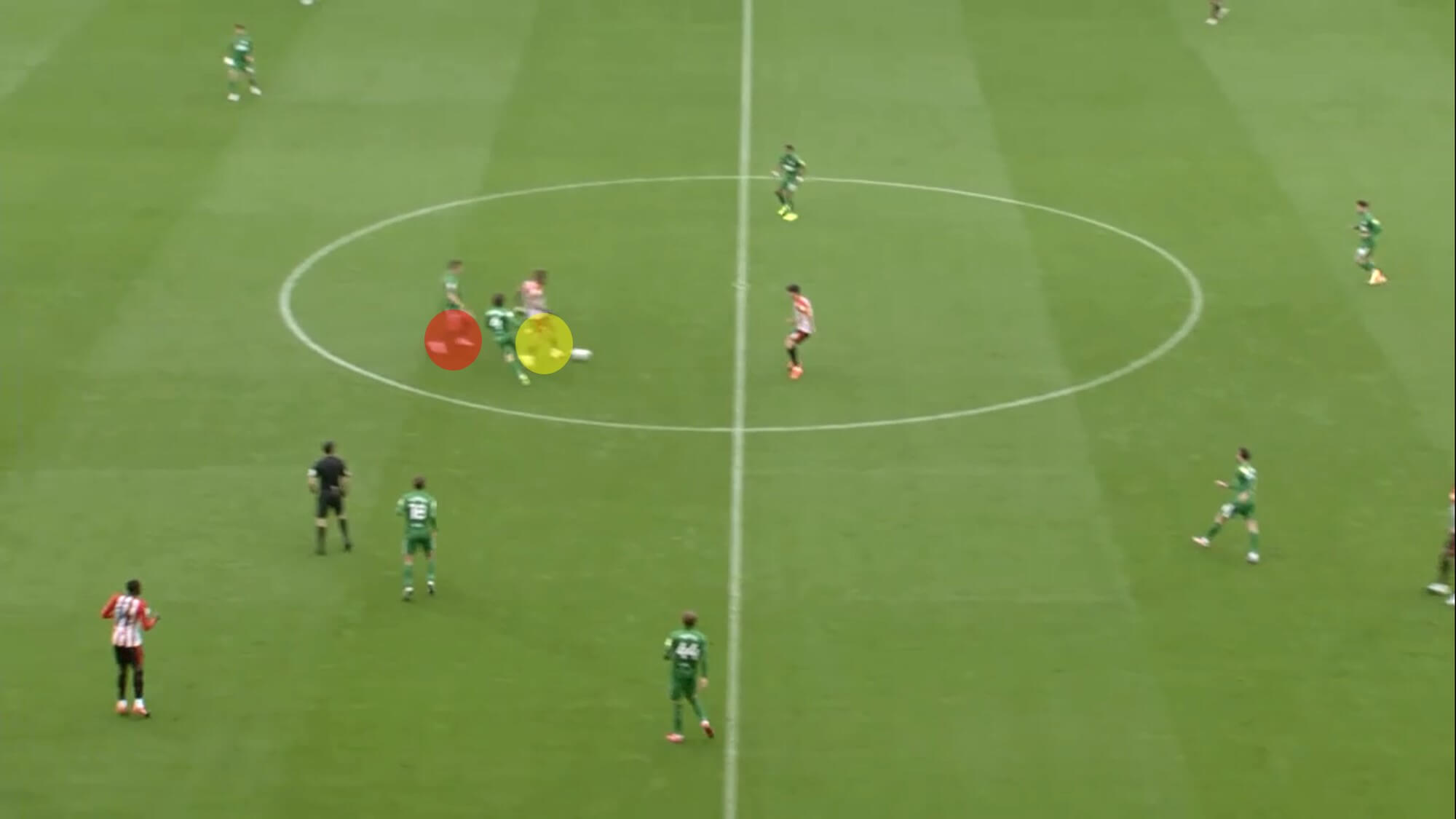 Ben Davies, Preston’s central defender, vacates the defensive line to get tight to Toney as he stops him from turning forwards on the ball. However, by doing this he’s left a gap in the defence that can be exploited. Marcondes pushes forward from midfield to get in behind the defence, as he latches onto the through ball played by Da Silva. 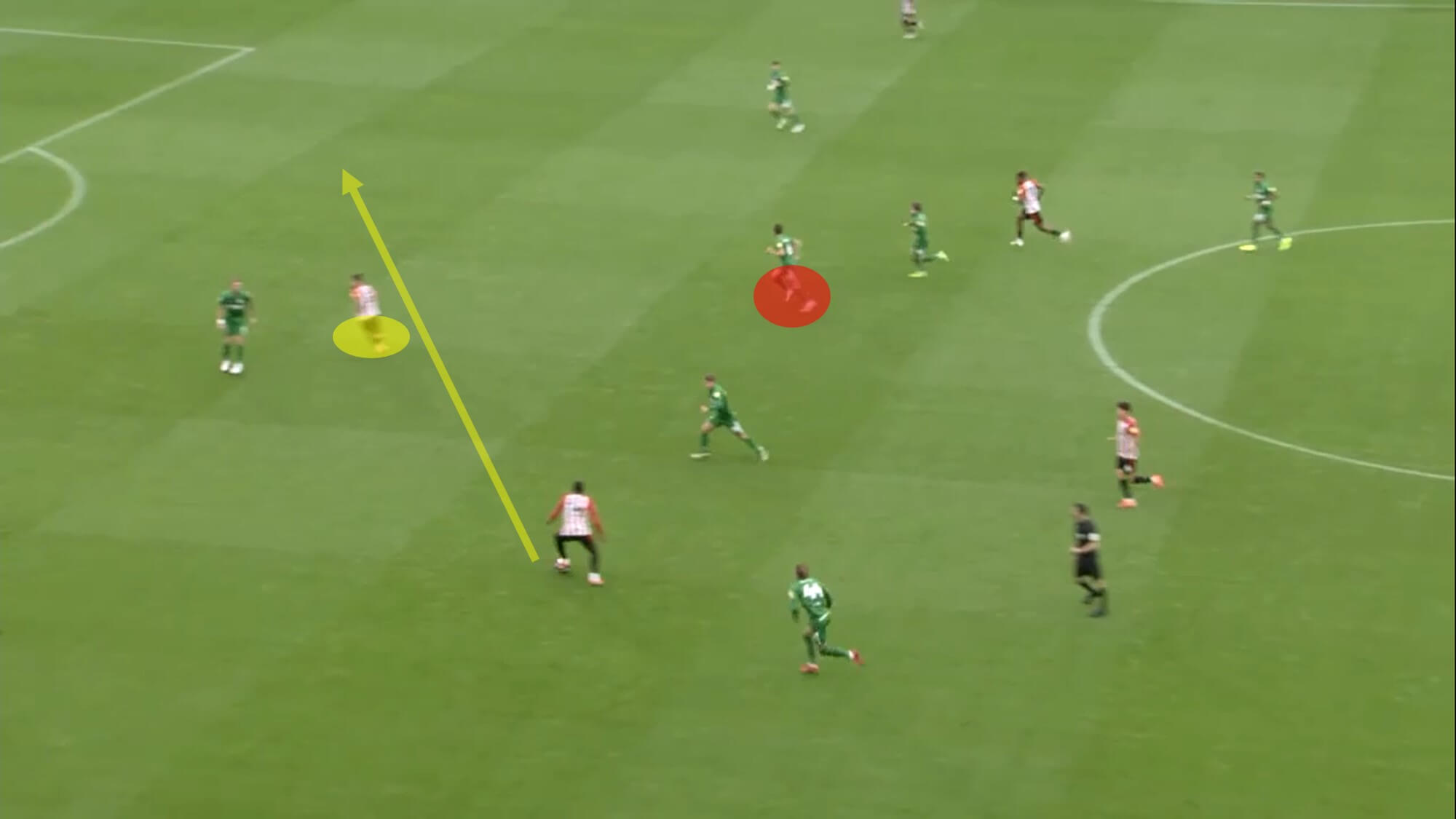 In the second period, Brentford’s methods of attacking changed. Due to their decision to sit deeper, their main route to the final third was through counter-attacking. Again, Da Silva was key to this. Despite the Bees’ lack of potency after the interval, there were a couple of times when he managed to carry the ball forward from deep areas and lead breakaways for his team. 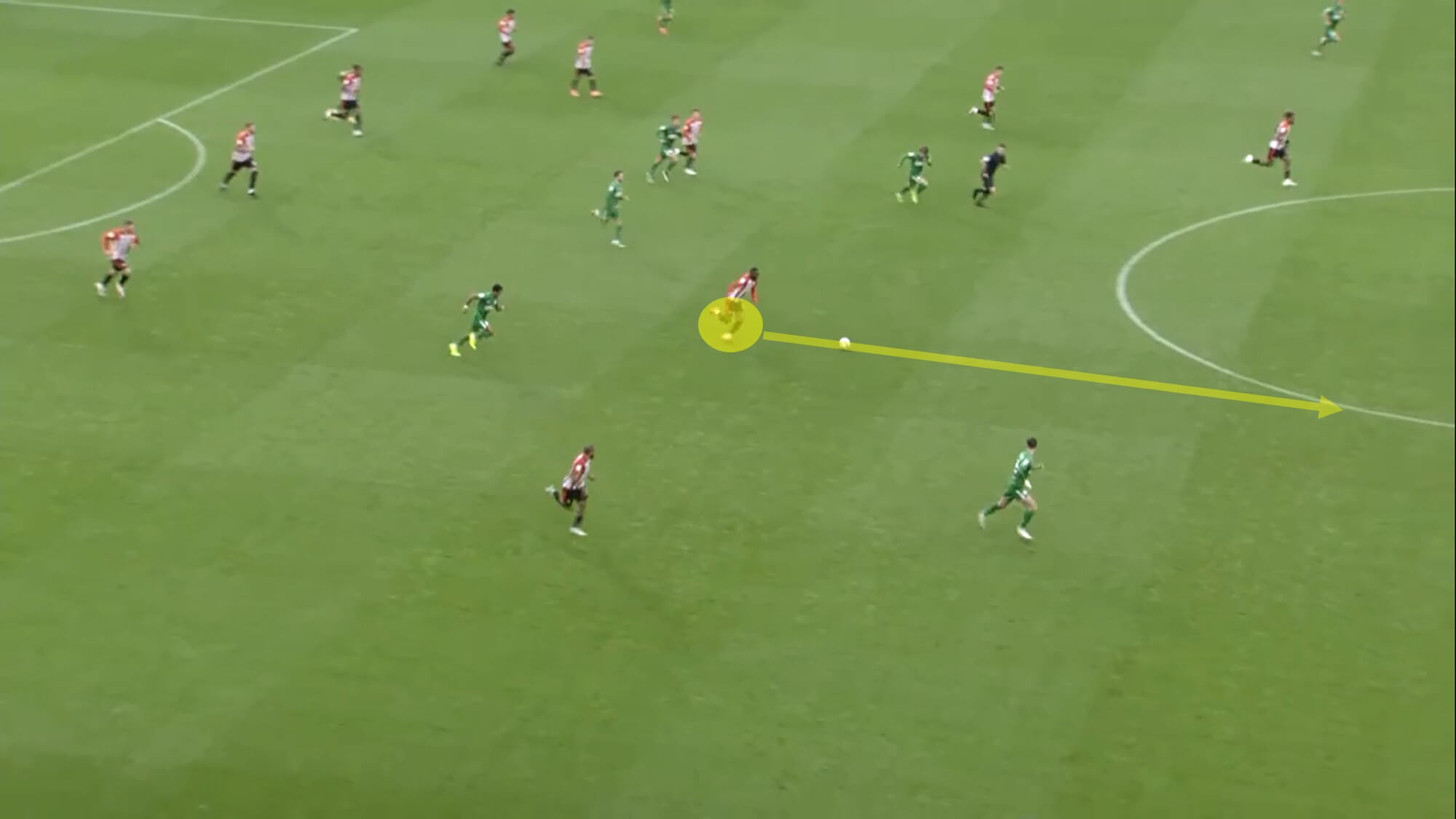 The thing that stood out most about North End’s performance was the aggression and intensity they demonstrated. Alex Neil doesn’t have the players at his disposal to pass Brentford off the park, but they made up for their technical disadvantage by being incredibly awkward to play against. When the hosts had the ball in their own half, North End would push men forward to apply pressure on the man in possession. They would also use a man-marking system to cut out the nearby passing options. This forced Brentford long, and due to their physical advantage, Preston were first to a lot of the headers and second balls.

Their success is doing this is shown by the fact that despite having less technically gifted players, Preston had 52% of the possession. Brentford’s average possession duration was 11 seconds, whereas the Lilywhites averaged 13 seconds on the ball. The away side also ended the match with an average passes allowed per defensive action (PPDA) of 8.3. Brentford’s PPDA was 17.9.

Preston’s counter-pressing involved players jumping forward from their starting positions to apply pressure to the man on the ball. In the image below, right-back Joe Rafferty pushes forward to press Da Silva. 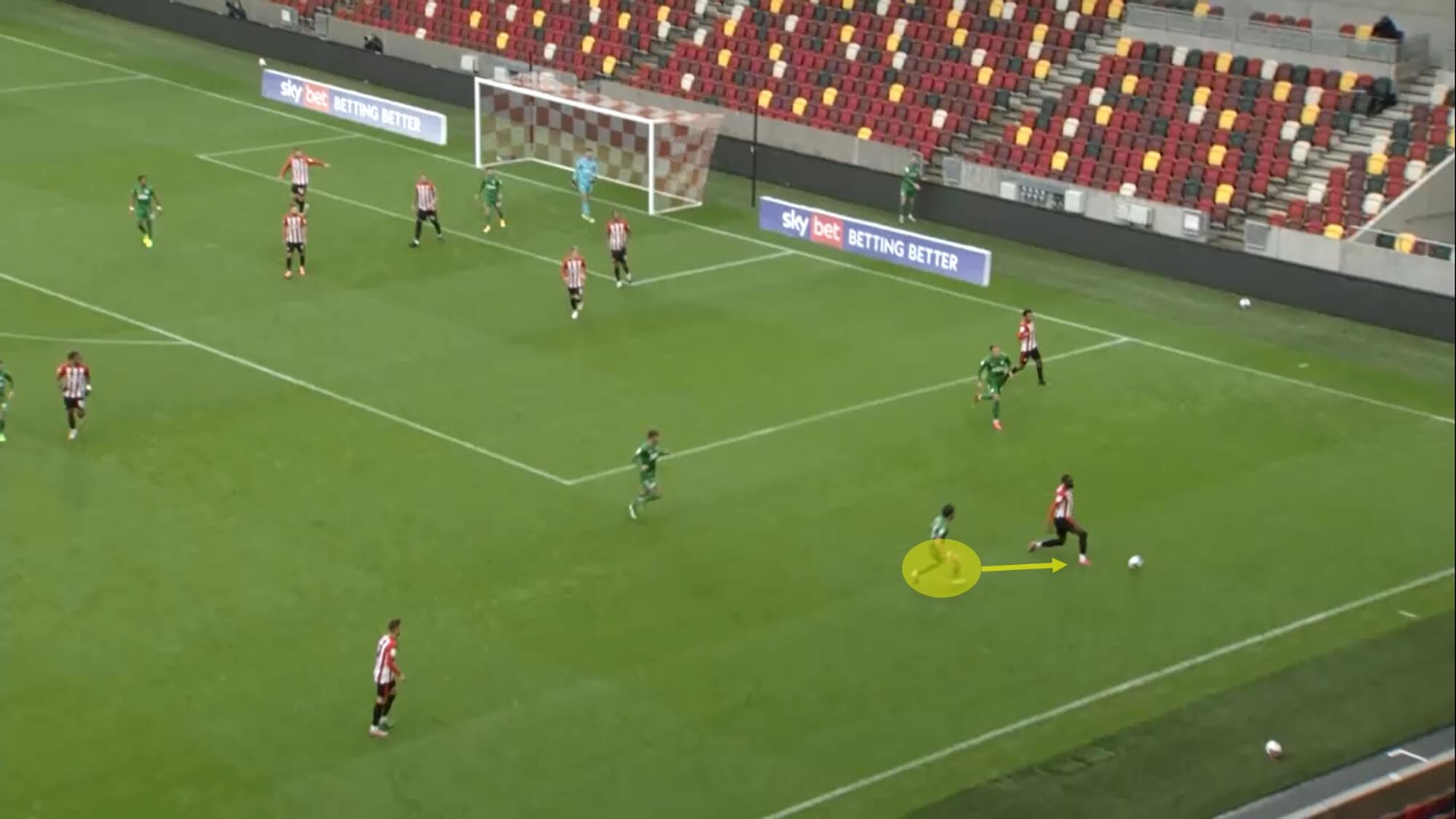 By doing this, he does risk leaving the Brentford winger Sergi Canos free if Da Silva can find him with a pass. However, Preston’s counter-pressing usually forced turnovers. Their equalising goal was a fantastic example of their ability to counter-press high up. In a similar fashion to the last image, left-back Andrew Hughes vacates his left-back position to squeeze high up the pitch. 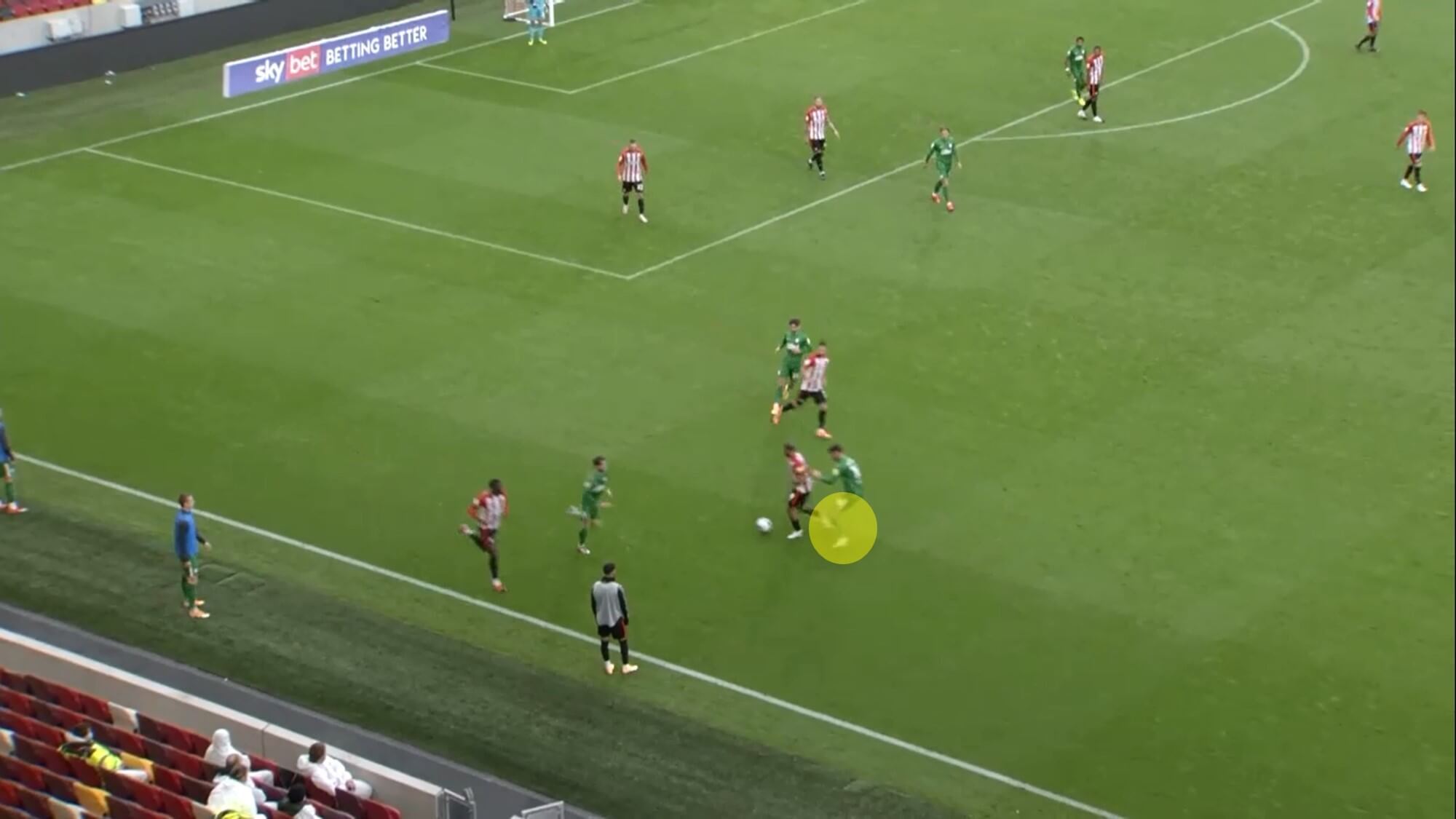 He manages to tackle Brentford’s Bryan Mbuemo, before advancing down the left side. The fact he won the ball back so quickly after Preston had lost possession caught Brentford’s backline out because they don’t drop a few yards to ensure that there isn’t much space between Preston’s Scott Sinclair and the goal. 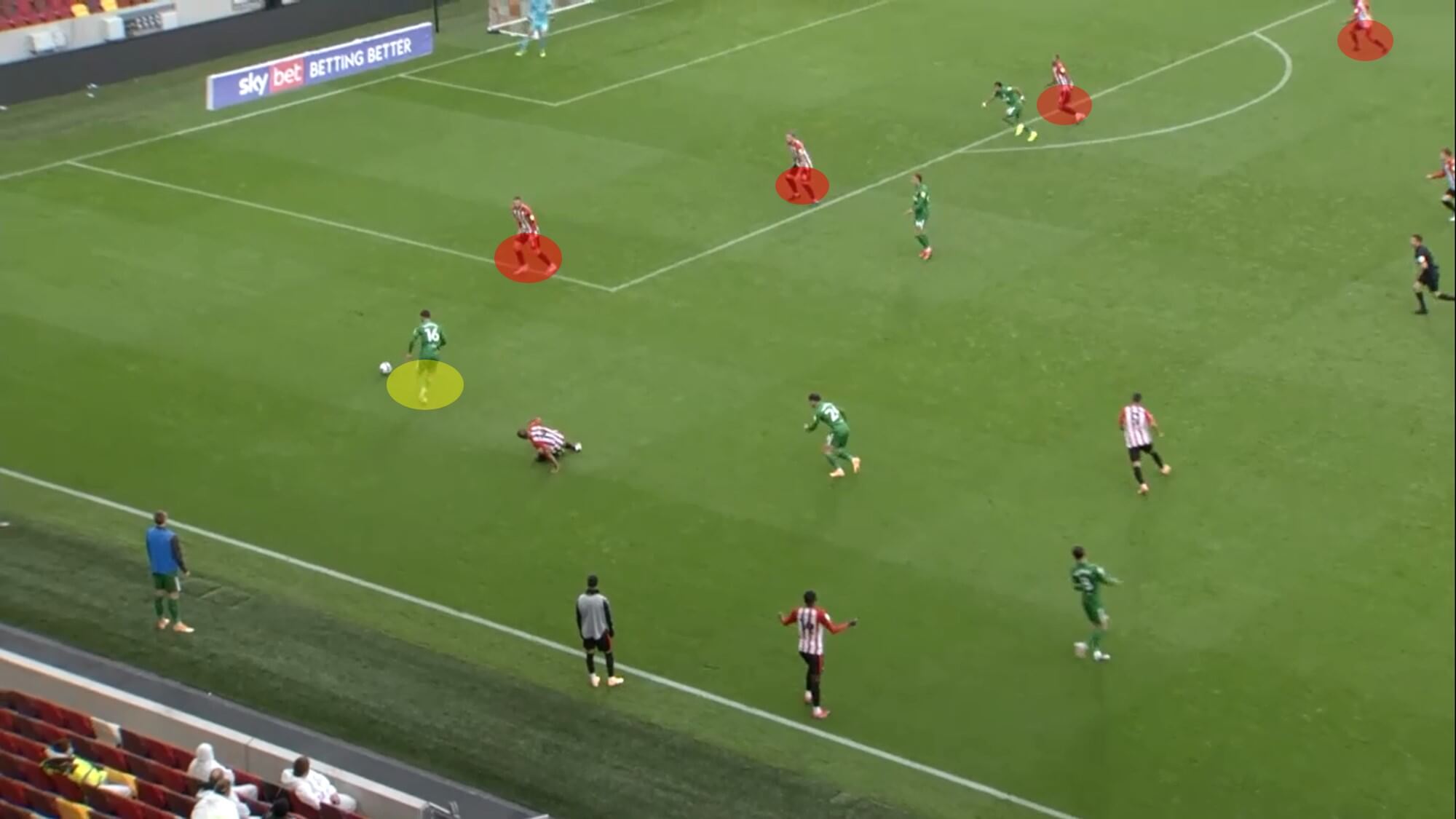 This results in Hughes having a lot of space to cut the ball back into, and Sinclair gets on the end of it to score.

Preston did play some very good football in the final third when they were in possession. This came to fruition a lot more in the second half, as Brentford focused on sitting back and trying to be difficult to break down. North End used positional rotations to drag defenders out of position in their more calculated, positional attacks. The attacking quartet of Potts, Browne, Sinclair and Maguire were all very interchangeable, making them harder to pick up as their fluidity allowed them to create space for each other. In the image below, we get a screenshot of how they managed to break the Brentford defence down. 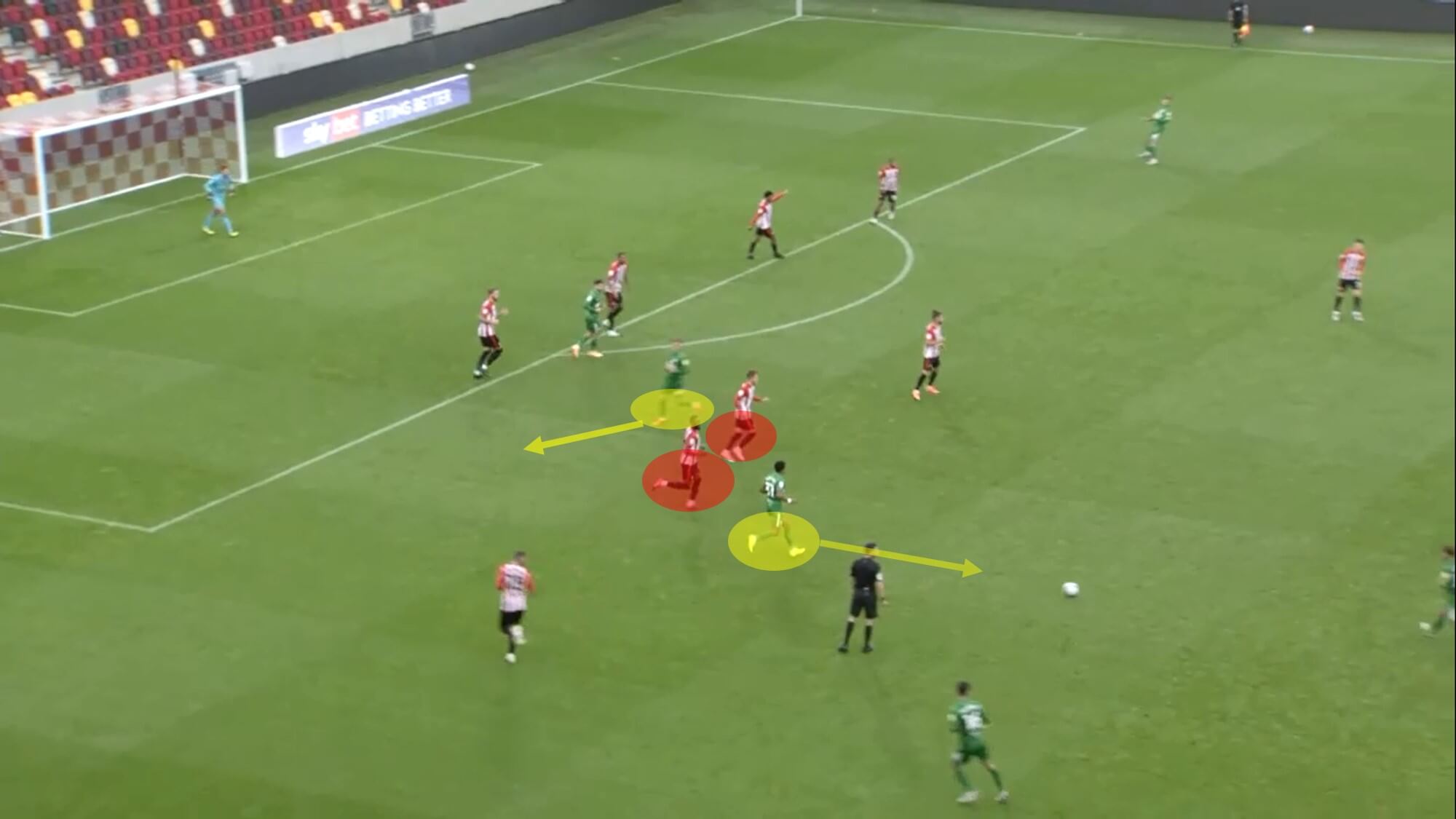 Sinclair picked up the ball on the left, before playing the pass back infield. Potts, who originally was playing on the right, had moved to a central position with Browne moving to the right. As Sinclair goes backwards, he catches the attention of Brentford’s two nearest midfielders (circled). This means that they now have their back to their own goal. Potts sees the opportunity to get in behind them untracked because of this and he pushes over to the left, occupying the space that Sinclair had just vacated. The Preston attacking midfielder can then receive the ball between the lines in the left half-space, and he managed to carry it forward and score. 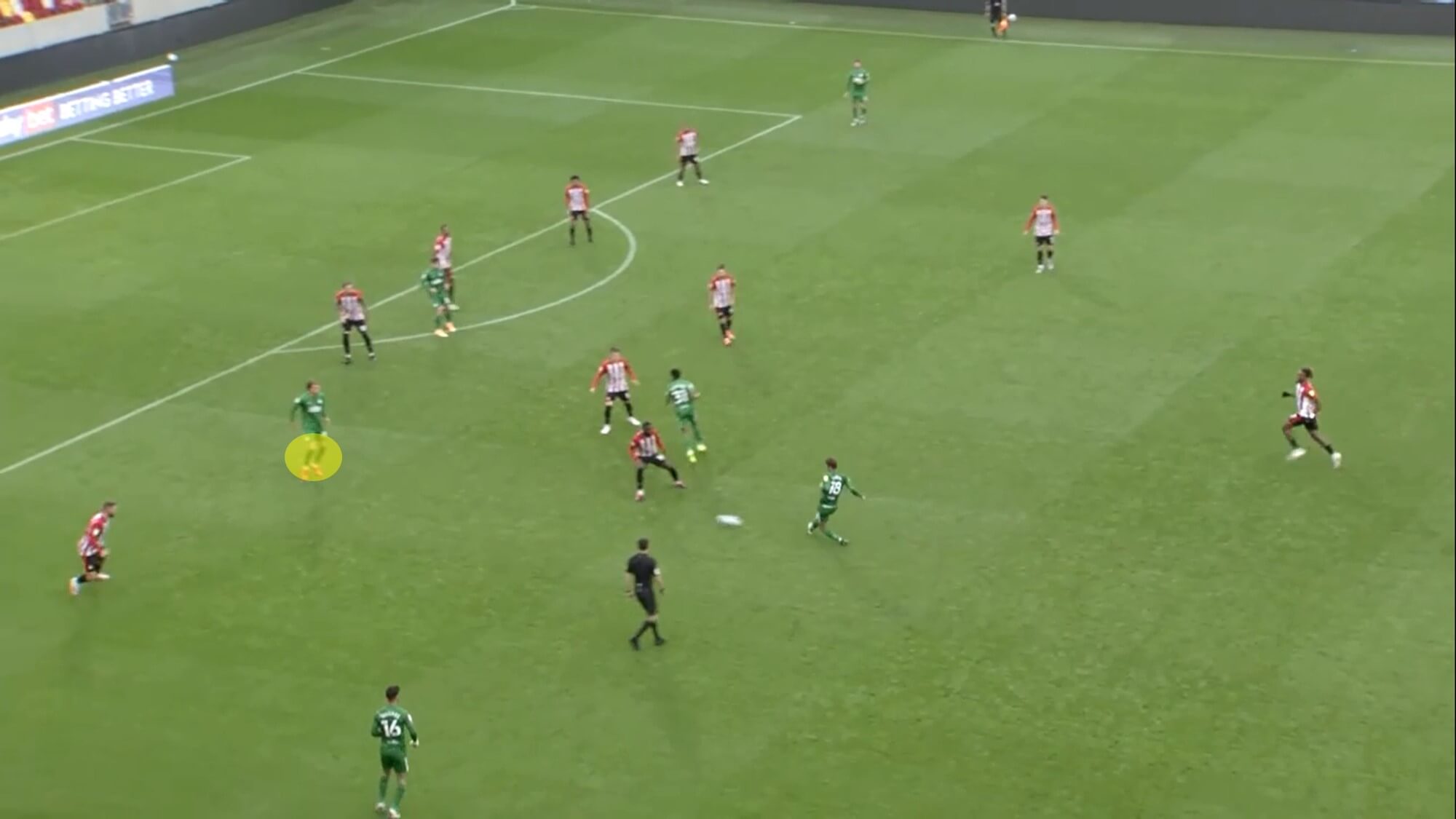 Of course, a second-half collapse so dramatic wasn’t solely caused by good Preston attacking and counter-pressing. The Bees defended woefully after the interval, and it’s clear that Thomas Frank’s tactics didn’t help their cause. A defence that conceded the second-lowest amount of goals last season was a shadow of its former self. As they were 2-0 up at the break, the home side decided to invite the Lilywhites onto them in the second half.

The image below is one of the many examples of Brentford sitting too deep, and defending with too many men behind the ball. Nine outfield players are behind the ball here, with nobody getting within a suitable distance of Ben Pearson to close him down. 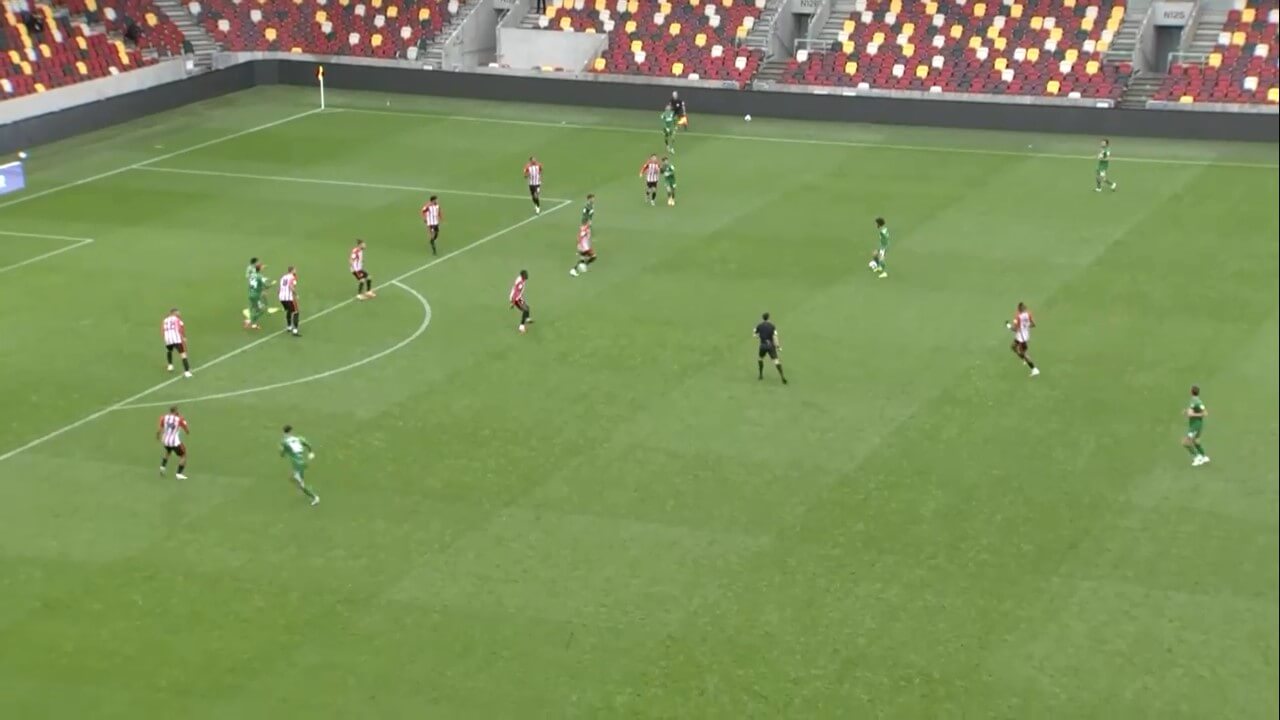 This means he’s got time to pick out a dangerous pass without the worry of losing possession, and due to the deepness of the backline, he could potentially make a pass into the penalty area.

Their defensive approach meant that every time they won back possession they were under pressure because they won the ball back in deep areas. That combined with Preston’s successful counter-pressing meant they were rarely able to string passes together or launch successful breaks. As a result, they kept handing the ball back to their Lancashire-based opponents who could launch another attack.

This analysis has explained some of the reasons for this stunning comeback, and Thomas Frank’s men will be keen to learn from a sobering afternoon of football. Brentford are usually a side we associate with open, attacking football. But it’s not quite clicking for them so far this season, and that second-half display was the antithesis of what we’re used to seeing from the Bees. As for Preston, Alex Neil will be delighted with a stunning second-half fightback. He could have rightly felt hard done by to be two goals down at the break, but he didn’t panic. Preston’s tactical approach didn’t change massively, they just pressed even higher after the break, took their chances and got their rewards.

This result leaves the two teams next to each other in the EFL Championship table, with Preston in 14th and Brentford in 15th.