Nottingham Forest hosted Brentford at the City Ground on Saturday as they looked to continue their impressive start to the Championship season.

They have lost only once this campaign – on the first day of the season against West Bromwich Albion – and sat in the play-off places ahead of this clash. As for Brentford, they were 15th moving into this game and were looking to build some momentum after drawing two and winning one of their last three games.

It was Forest who secured the win here with a 1-0 victory thanks to a 56th-minute Ben Watson goal. In this tactical analysis, we will provide analysis of the tactics of both teams, and look at how the home side secured their sixth win of the season. 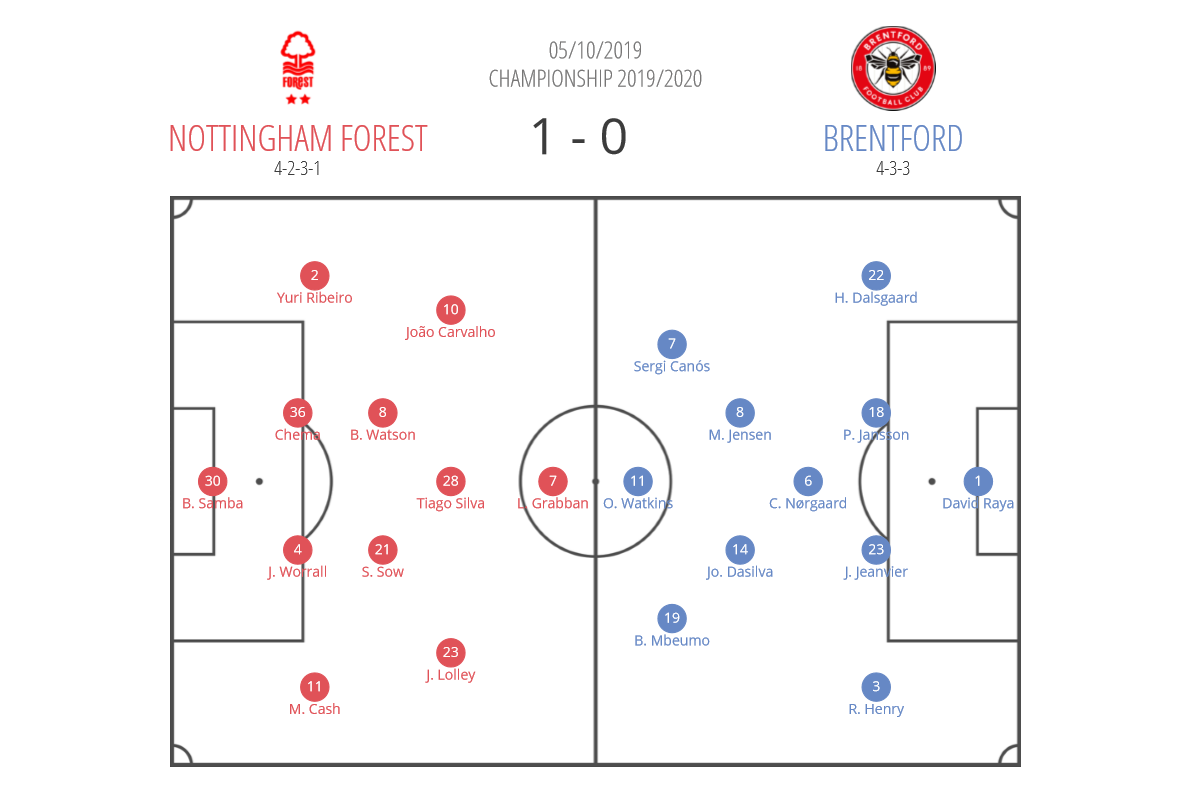 Sabri Lamouchi made three changes to the Forest side that drew 1-1 against Blackburn Rovers on Tuesday night: João Carvalho, Tiago Silva and Chema Rodriguez came into the eleven, replacing Sammy Ameobi, Tobias Figueiredo and Jack Robinson respectively. Carvalho and Silva lined up on the left side and centrally of an attacking three behind striker Lewis Grabban (joining Joe Lolley on the right-hand side), whilst Chema partnered Joe Worrall in the centre of defence. Watson and Samba Sow were the two midfielders tasked with providing defensive security in the middle of the pitch.

As for their opponents, manager Thomas Frank made two alterations after their 1-1 draw at home to Bristol City on Wednesday evening, Said Benrahma and Kamohelo Mokotjo making way for Bryan Mbeumo and Mathias Jensen. Mbeumo started wide on the left, with Jensen offering a box-to-box, energetic style alongside Josh Dasilva from the centre of the pitch, the pair operating slightly further forward than the more conservative Christian Norgaard. Seven-goal top scorer Ollie Watkins continued up front.

With the aesthetically-pleasing style of football that Lamouchi has implemented at the club, it was a clear ploy by Brentford to try and stifle the flow of Forest by pressing them high in order to not allow them the chance to easily build from deep. They were looking to disrupt the rhythm of the home side by trying to deny any spaces opening up centrally from which Forest’s offensive players could profit in. They were content for Forest to continue to circulate the ball in their own defensive line so long as they were not able to pass through the high press they were operating with.

In order to try and combat this, Forest were producing great horizontal width in their defensive third as they looked to find a way beyond the pressing Brentford men. Full-backs Matty Cash and Yuri Ribeiro would pull right out onto their respective touchlines to try and stretch Brentford as wide as possible in the hope of opening up a gap, or gaps, within Brentford’s lines that they could then break lines and pass through.

The shape made by Forest in their build-up play can be seen below, with Watson on the ball and Ribeiro and Cash both extremely wide. Cash, the ball-far full-back in this instance, has a lot of space to operate in, with Brentford content to remain narrow to try and ensure they are not played through. The space afforded to Cash (and Ribeiro when he found himself in the same situation) in addition to the presence of Chema, Worrall and Samba ensured that Lamouchi’s men could continue to keep the ball moving and thereby drag around the Brentford press in search of an opening to find their forward-thinking players and thus turn defence into attack. 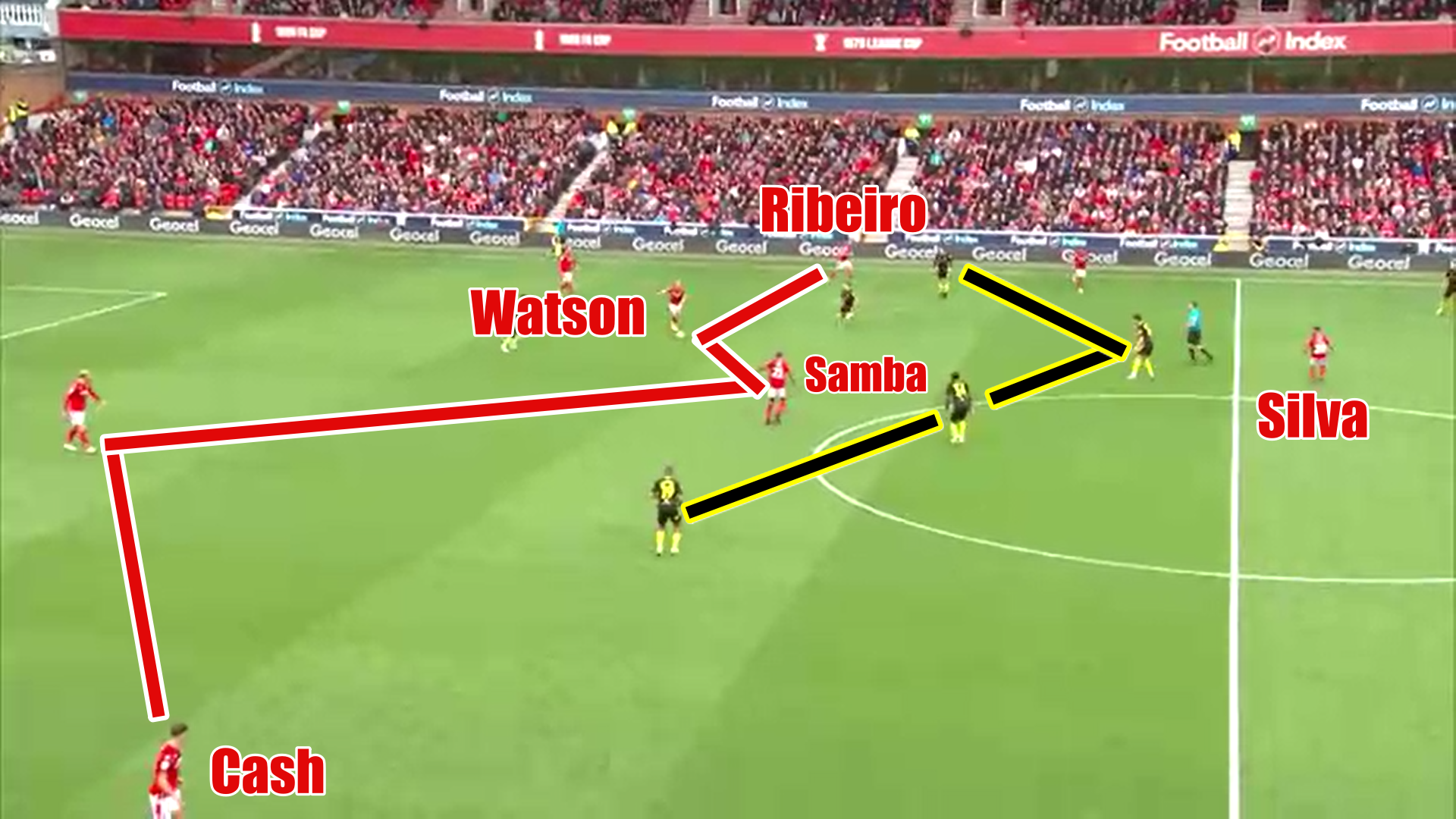 Still with reference to the above image, Silva is in a large amount of space behind the first Brentford pressing line as he is seeking to be able to receive the ball, turn, and run at the Brentford defence. The recognition skills of Watson are able to identify a passing lane open up within the Brentford pressing line, of which he is able to thread a line-breaking pass through (below). This ball instantly takes five Brentford men out of the game (players highlighted) as they are now the wrong side of the man on the ball (Silva) and retreating towards their own goal. Although nothing came from this particular instance, it is a clear example of how the Londoners were seeking to stifle their hosts, and how Forest reacted against this tactic. 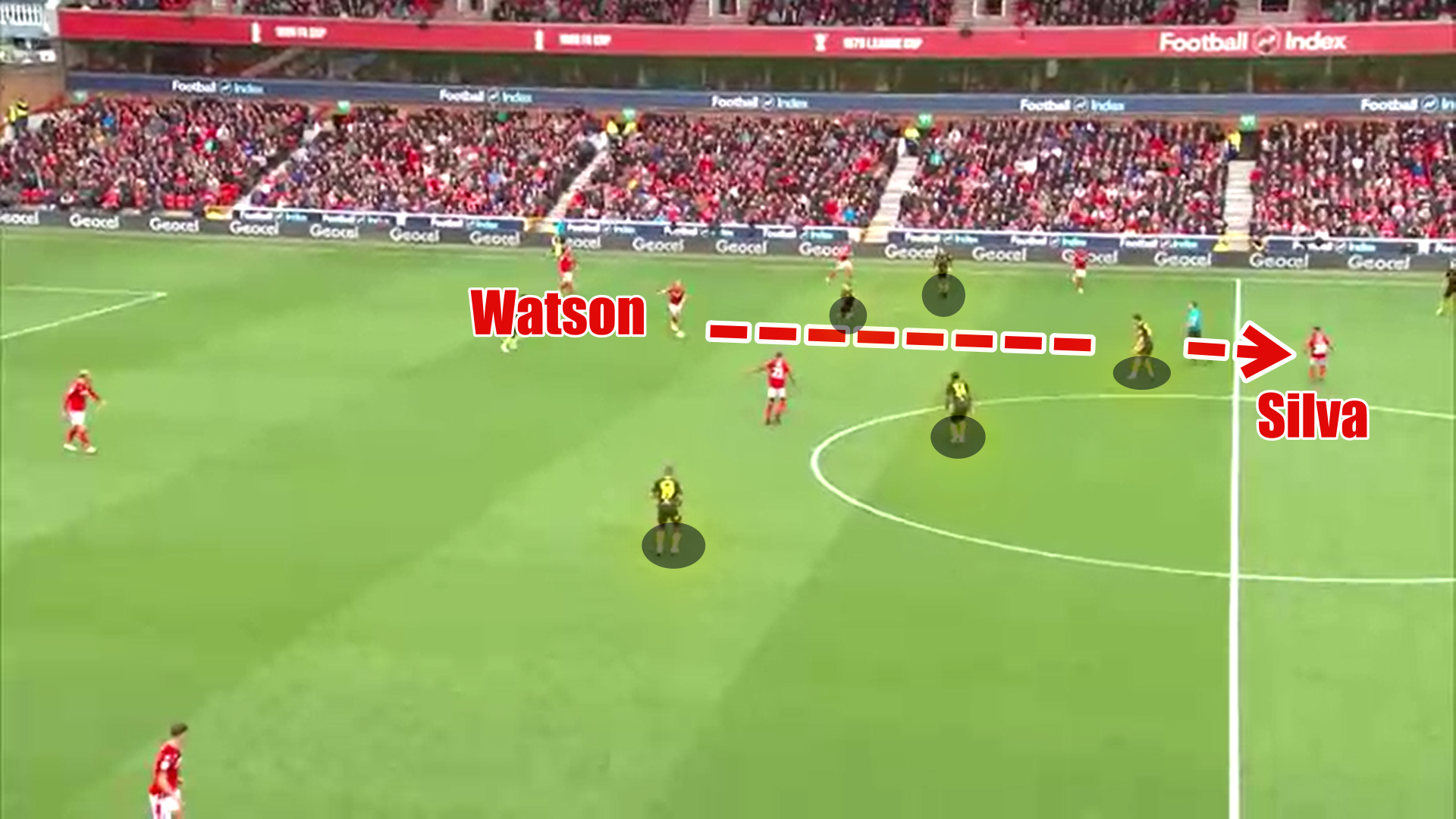 In an intriguing game of cat and mouse, Brentford then reacted after the break to ensure that such occasions were not able to happen as easy with an alteration in their set-up when out of possession. They opted to sit slightly deeper off the ball with a flat bank of a midfield four and Norgaard sitting as a genuine defensive midfielder, marshalling Silva as he looked to find gaps in which to operate in – as seen below. 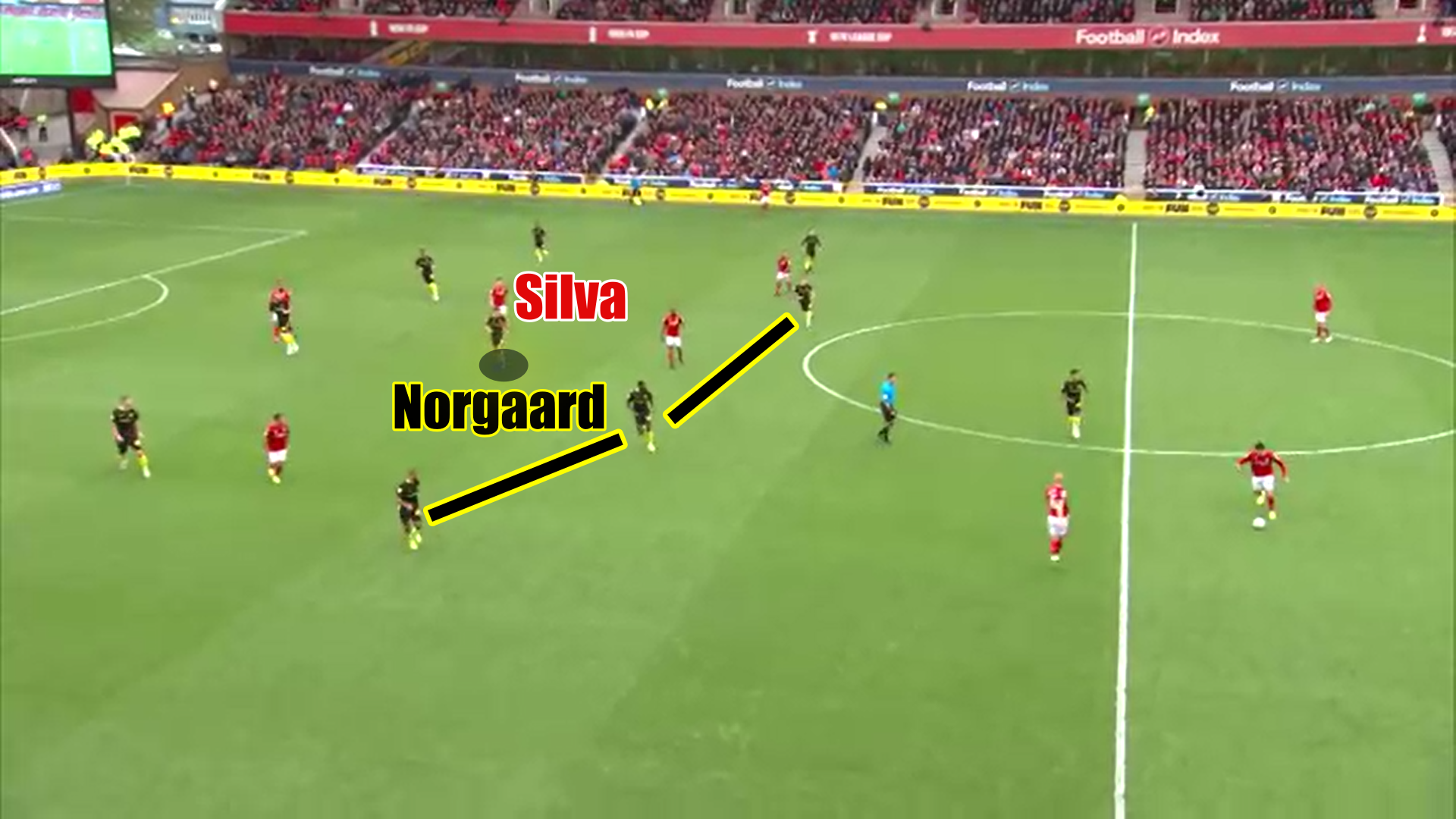 Offensively, the greatest danger posed by the Bees’ attackers is their pace and skill when presented with space in the final third. Just as they tried to restrict space for Forest’s attacking stars, Frank set his team up in a way that was able to (try) and capitalise on the spaces opened that their speedy forwards could break into.

Their forward triad of Mbeumo, Watkins and Sergi Canos were all stretched across the width of the Forest defence, all looking to be on the shoulder of their defender to then burst in behind.

They were aggressive in their wish to try to build out from the back, and, much like Forest, stretched their defenders wide and dropped in Norsgaard when receiving the ball off the goalkeeper to give themselves the best chance of retaining and building from such positions (below). Forest committed three players high to prevent Brentford from being able to easily get on the ball and advance up the pitch – however, this method was not without danger itself.

As it was Carvalho and Lolley – the two wide attackers – who committed with Grabban to try and pen the Bees in, this created spaces behind the pair for goalkeeper David Raya to play beyond the press and into his full-backs, who could then attack. 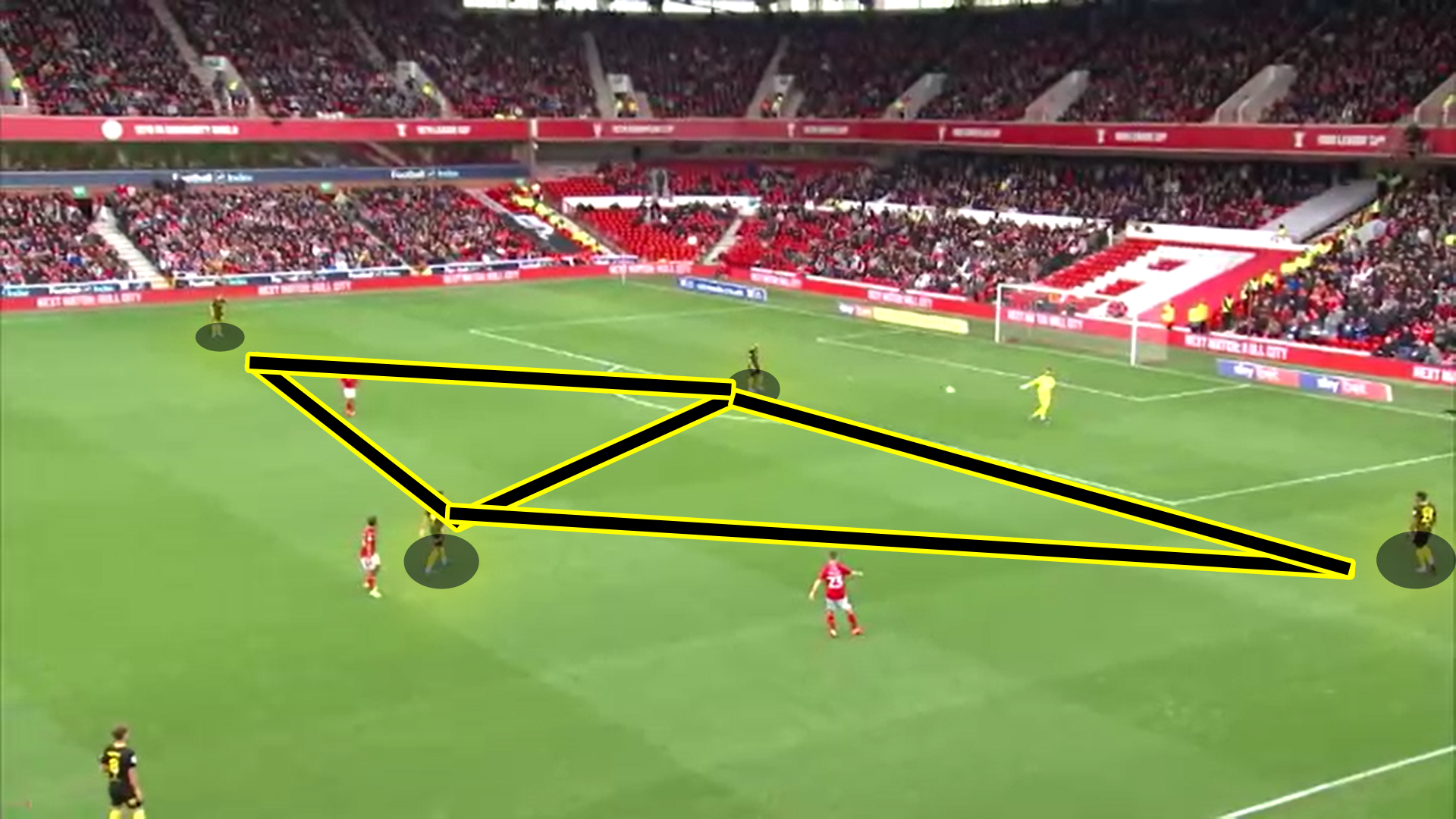 One such occasion is seen below, with Rico Henry able to profit from such a move as he is passed into after Lolley had pressed high to try and engage the split central defenders. As Lolley is now the wrong side of Henry, the left-back can drive into the space indicated by the black box and advance on the Forest defence. Furthermore, Canos, Watkins and Mbuemo were situated ready to run in behind their defenders, pushing them back in order to ensure they are able to react and deal with any such runs in behind them. 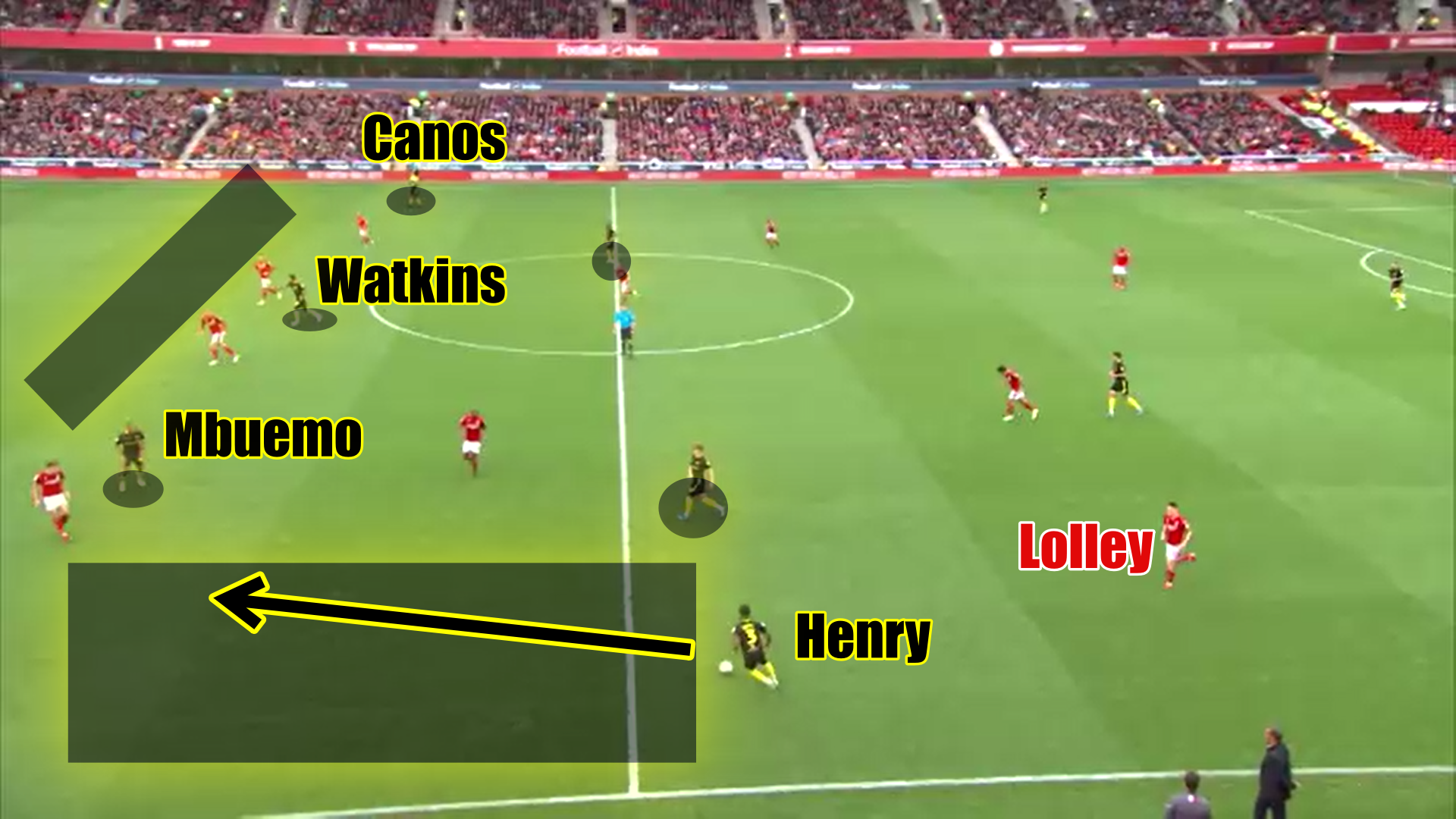 In the above example, it was a case of the former; in the below image, right-back Henrik Dalsgaard did not make a run into the open space behind Ribeiro and so there was a lack of width in Brentford’s attack that ultimately saw the move break down. 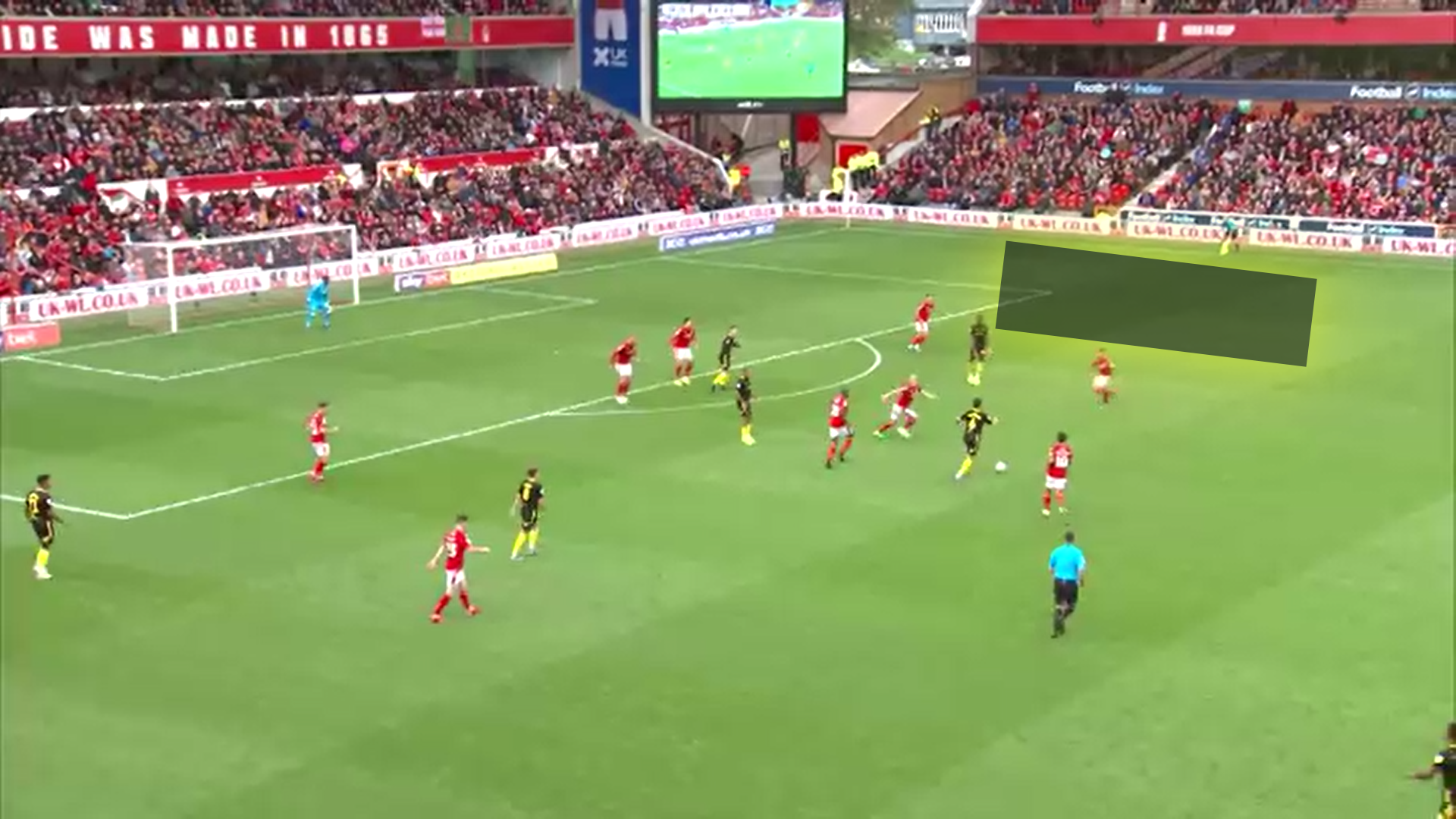 With the free-flowing style used by their team, there is a danger that Forest could be hurt in transition should they not be structured in their positioning off the ball. With the full-backs being so important to their offensive success, their progression up the pitch is balanced by some smart positioning from both Watson and Sow.

Whenever their ball-near full-back was joining in with the attack, Watson or Sow would drop into the half-space to provide defensive cover and thereby retain the horizontal and vertical balance that allows them to be an attacking threat. This movement would give the full-back the licence to not be conservative in his offensive positioning, as he knew he had that insurance policy behind him should they lose the ball and be countered on. Two such examples are shown below. 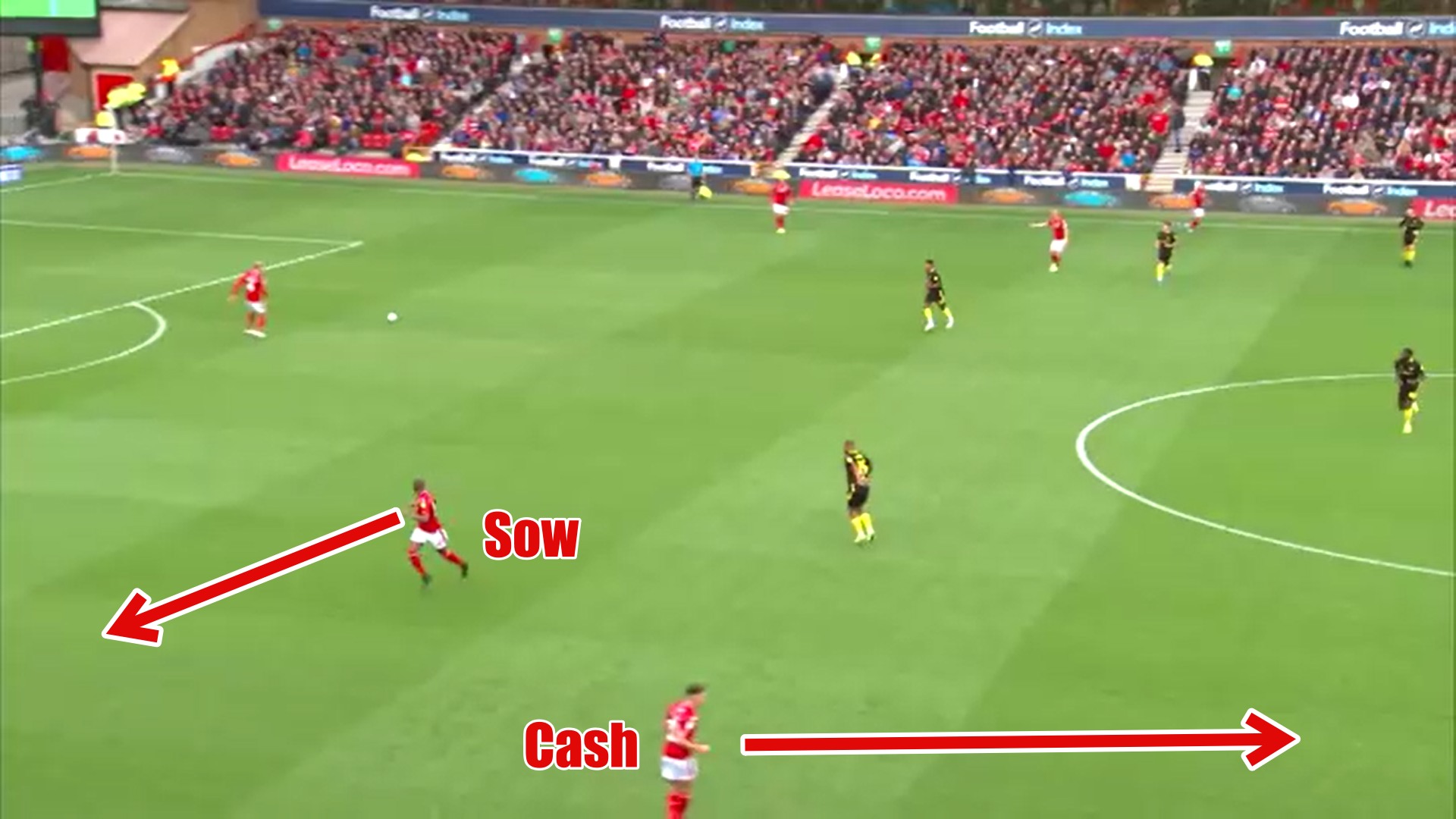 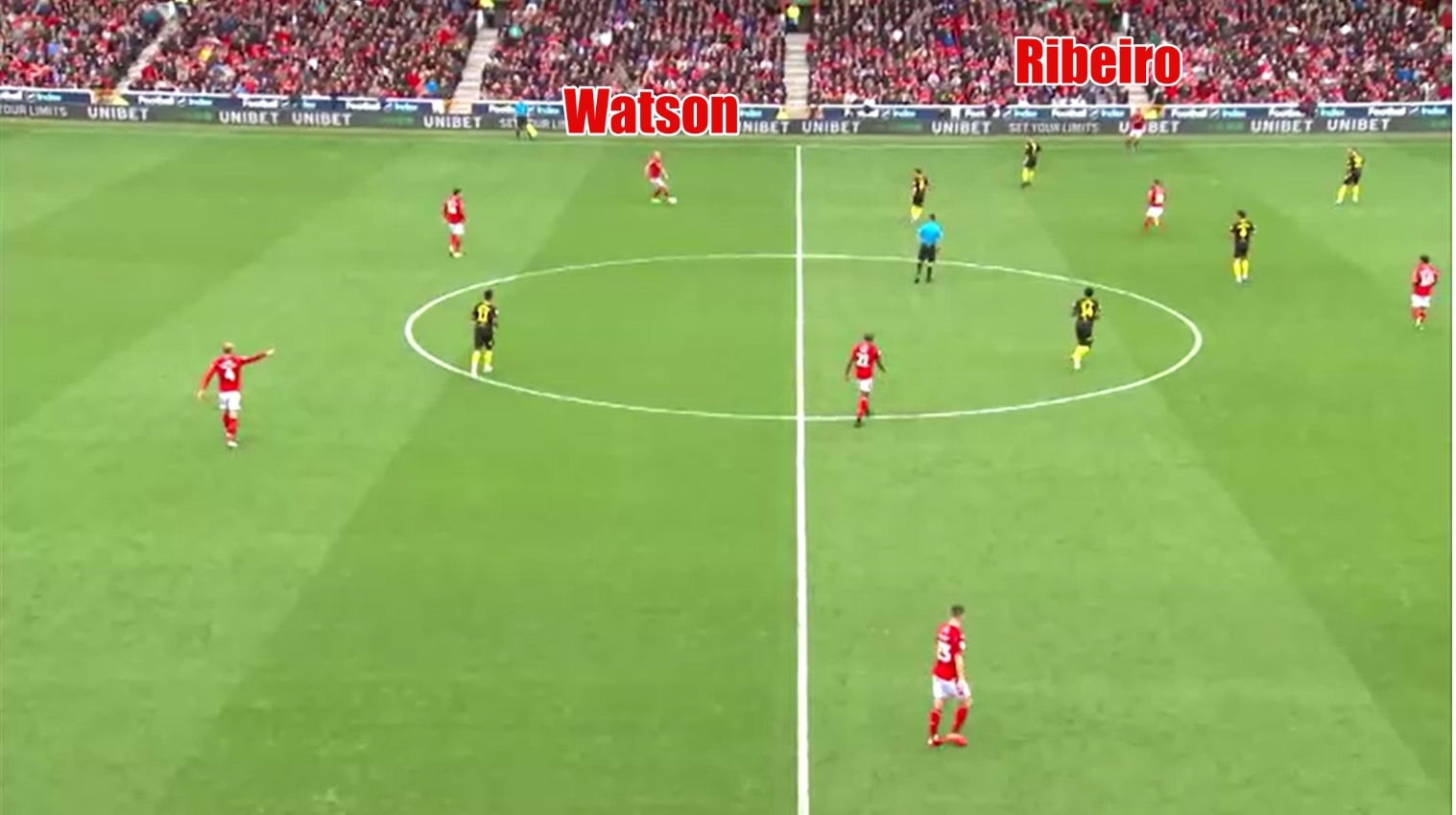 With Cash and Ribeiro being more offensively proficient than Watson and Sow, yet the latter pair having greater ability and understanding of breaking up play, it made sense for them to rotate positions in order to maximise their respective abilities and thus allow their team to become a more fluent, cohesive unit as a consequence.

Furthermore, as this rotation would push Ribeiro and Cash higher up the pitch, the energetic duo could then use their seemingly limitless energy reserves to press Brentford in transition within the Bees’ defensive third – another bonus of having the two players in offensive areas. Not only did they allow for a greater quality on the ball, but they could also assist their team in their hunt to quickly win the ball back.

Overall it was an entertaining match between two teams who look to play football in an entertaining, eye-catching manner. They are two sides that have been influenced by their foreign head coach, and will surely only get stronger, develop a deeper understanding of their system and thus become an overall more dominant side as the season progresses. Both are clearly well able of keeping the ball and being able to dominate their opponents with smart movements and patterns of play in spells; the key difference here was Forest’s clinicality in the final third. They were able to capitalise on their opening and make Brentford pay – which ultimately proved to be the difference.