As is often the case in the lower leagues of the EFL, several teams higher up the footballing pyramid release young, talented players on loan as they look for their potential stars of the future to gain experience of men’s football week in, week out. One such case is that of Rhys Norrington-Davies, who is on a season-long loan at League One Rochdale from Sheffield United.

The left-back spent last season with Barrow in the National League and has now been tasked with becoming a regular in the third tier with Dale. In this scout report, we will use our tactical analysis to analyse how Norrington-Davies has started in Lancashire, and see how he is adapting to life as a first-team EFL player.

What do the stats say?

The 20-year-old has impressed in his (albeit limited) time at Spotland, providing defensive solidity in addition to genuine attacking potency, making himself one of the first names on Brian Barry-Murphy’s team sheet. He has shown his ability in-and-around the final third of the pitch, averaging 3.29 progressive runs per match, whilst he also sees 46.4% of his crosses reach their target. 38.1% of dribbles he attempts are successful, with him winning on average 36.4% of his offensive duels. Furthermore, he has around 1.71 touches in the opposition box and draws 1.73 fouls per game. His attacking significance to his side is highlighted by the fact that of the 87 times he has lost the ball so far this season, 55 (63.2%) of those have been in the opposition half.

When looking at the defensive side of his game, he is dominant in 68.9% of defensive duels he gets into, also winning 60.7% of aerial duels. He makes around 5.57 interceptions per 90 minutes.

How does he fit into Dale’s style of play?

Rochdale have gathered plenty of plaudits for the ultra-aesthetic style of play and tactics they have adopted this season under Barry-Murphy, and Norrington-Davies has been – and will likely continue to be – a vital part of their system. As they look to play short from the goalkeeper – no matter how heavily they may be being pressed – then they are reliant on overloading from deep and occupying a number of horizontal and vertical passing lanes in order to provide a variety of options for the man on the ball to give themselves the best chance of being able to advance out of the defensive third with the ball. 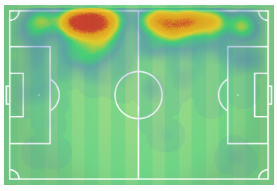 As can be seen by the above heatmap and backed up by the following image, Norrington-Davies spends the majority of his time hugging the touchline in his defensive third. 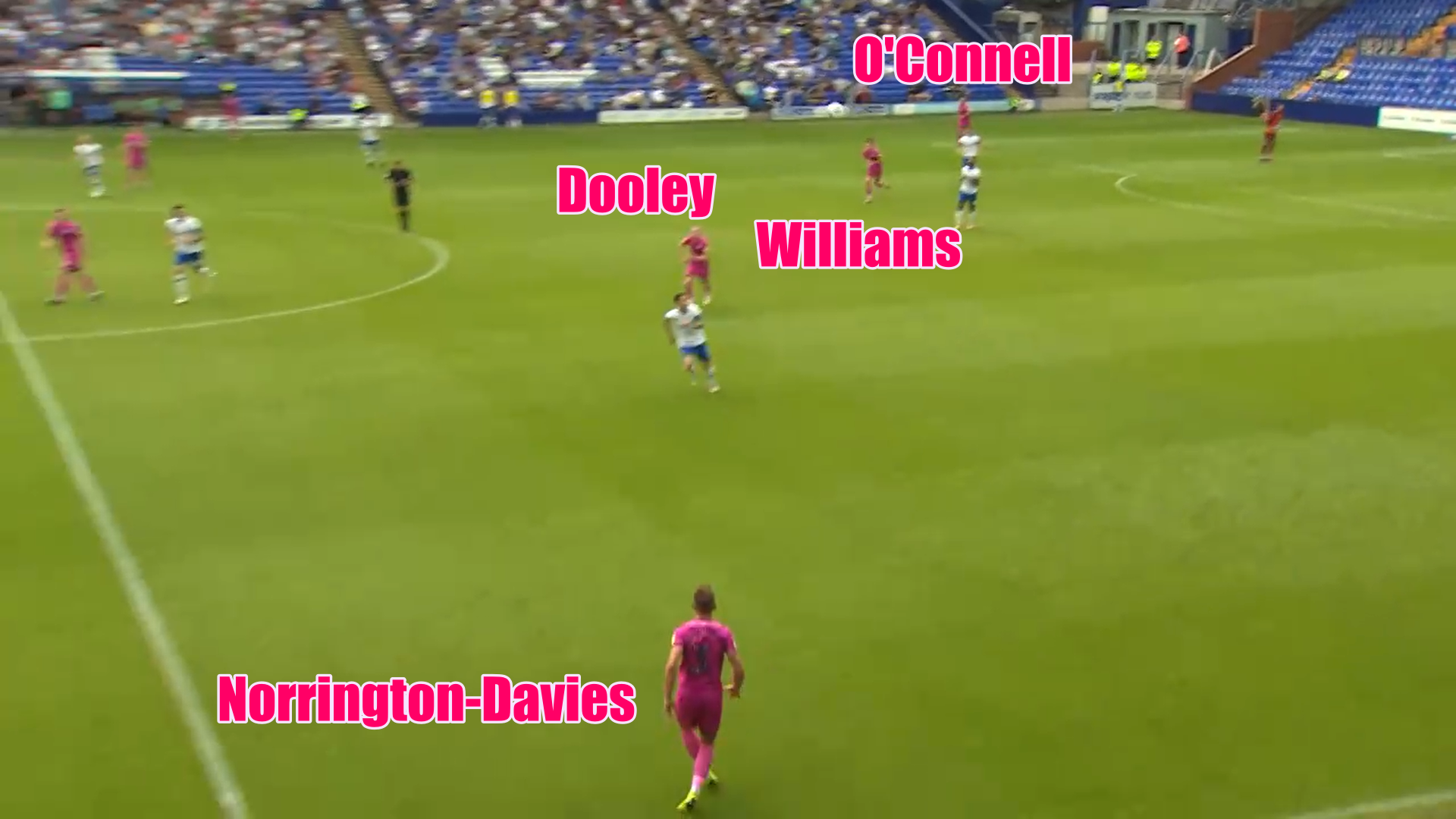 The above image is a perfect example of how Dale look to construct attacks: they have their central defenders Eoghan O’Connell and Jimmy McNulty (out of shot on the right-hand side of the picture) split wide, which in turn allows midfielder MJ Williams to drop in and create a back three, and therefore gives goalkeeper Robert Sanchez greater options to choose from in his distribution.

Where Norrington-Davies fits in here is that he is not just situated as wide as possible horizontally, but he is very aggressive in his vertical positioning also. This thereby makes their defensive half as large as possible, as they are utilising almost every available space, and so makes it harder for the opposition to mark. If the opposition press those deepest (from a Rochdale perspective, i.e. the central defenders) and look to prevent Rochdale from building from deep, then it allows for Norrington-Davies and his fellow full-back to be opened up as a possibility. If the opposition sit off, then the Rochdale defence can receive the ball and step out with it, and look to overload from there.

Norrington-Davies is extremely adept at, once receiving the ball, advancing up the pitch in order to gain his team territory higher up. As Barry-Murphy looks for his side to be incisive in transition, the full-back’s willingness to instantly attack any open space upon receiving the ball is vital in this wish. 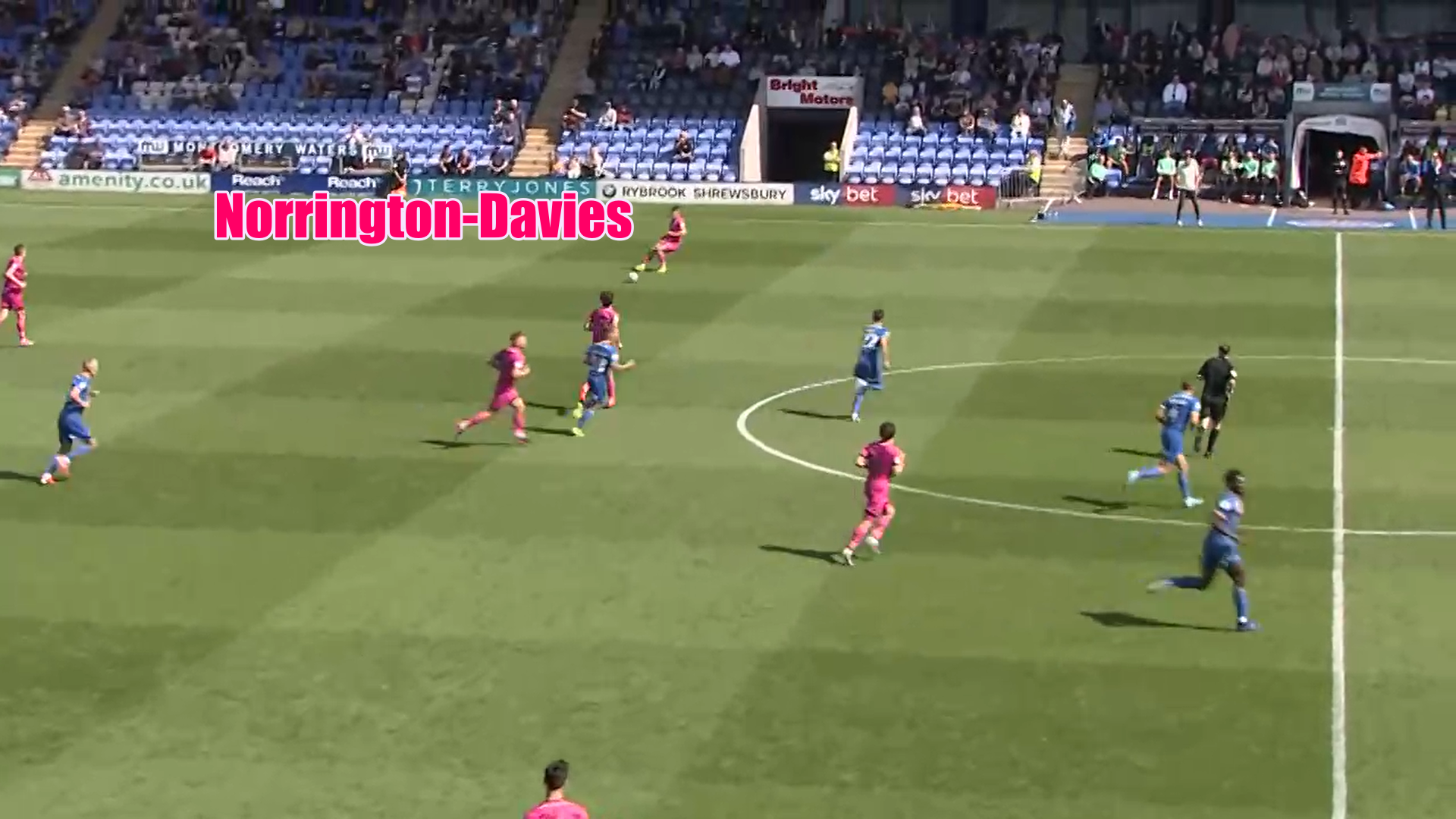 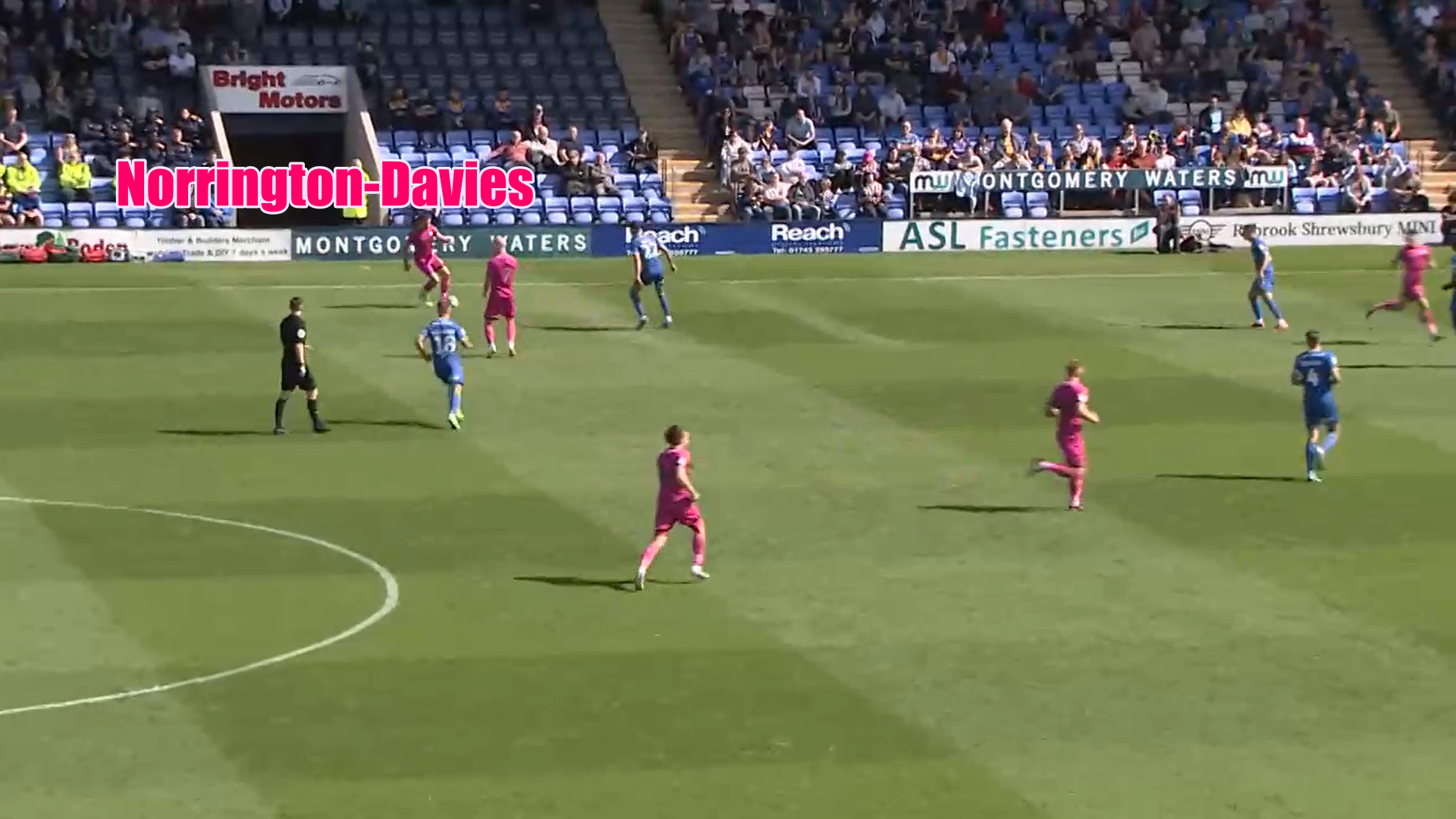 As can be witnessed above, as the ball comes to him he does not hesitate to look to advance. Where others may take a touch and assess their possible options, he has one thought in his mind: drive with the ball. His body positioning makes it clear as to what he intends to do, as it can be seen that he is looking to take the ball first time on the outside of his left foot and push it into the gaping, vacant space ahead of him. In doing so it takes him from around 20 metres inside their half to roughly 15 metres inside their opponents in a matter of seconds, gaining his side valuable territory in the process. If he had delayed this action then it would have allowed their opponents to reset and solidify their defensive structure, yet such was the immediacy of his run that it prevented them from doing so.

His ability to move the ball into wide areas and give his side an option from such a position is what allows them to then create from a central area. The attacking midfield players within the team can, as a result, occupy and overload central spaces as they need not worry about having to provide width to their attack due to Norrington-Davies’ presence out wide. Another example of this is explained below. 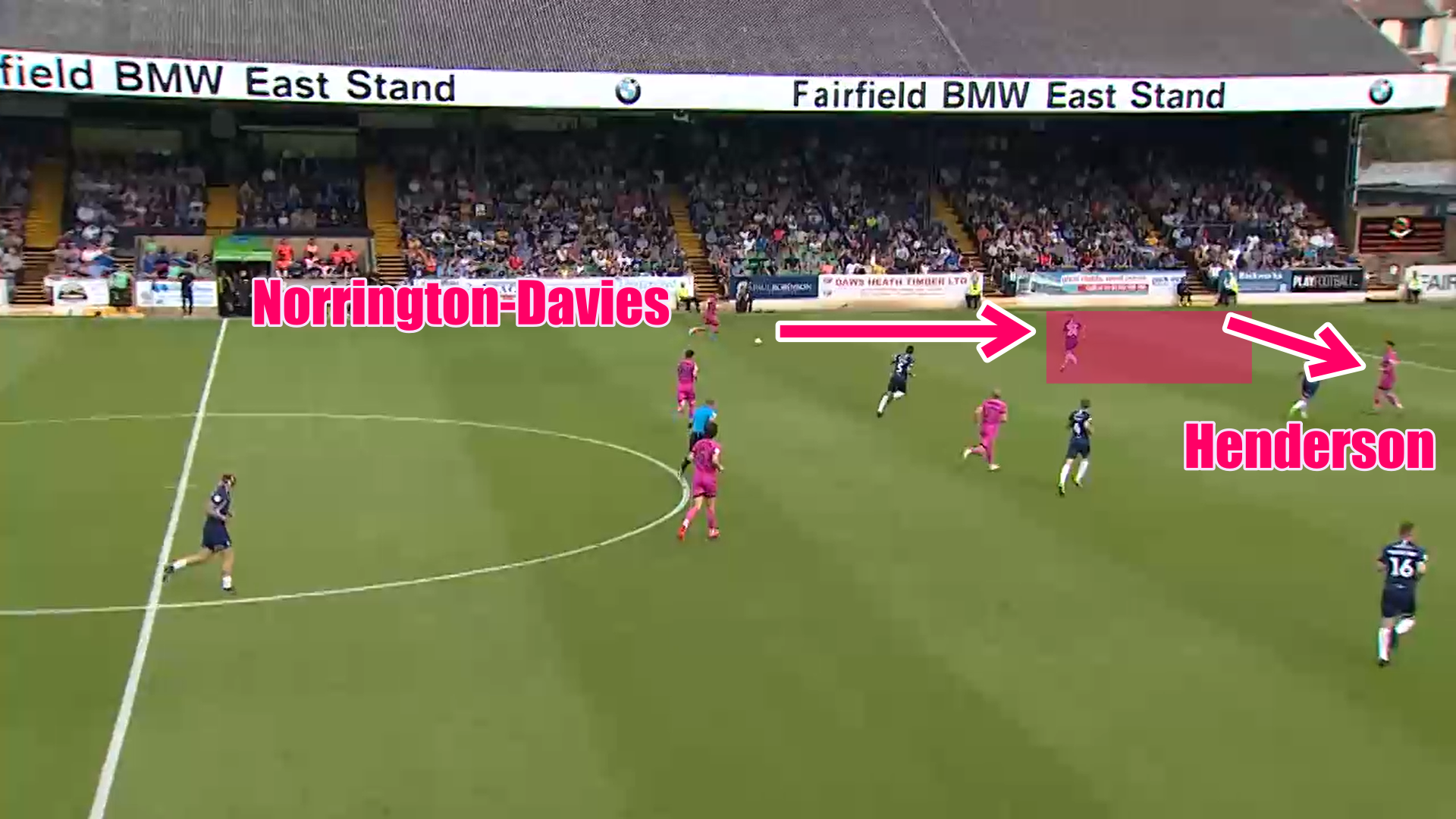 Here, the ball is worked out towards the run of the full-back. Upon doing so, forward Ian Henderson, who had previously been occupying the left half-space, retreats centrally. This movement is done for two reasons: to allow Norrington-Davies the space to run into and attack behind the opposing full-back, and to provide greater options for him to pass to centrally.

In another example from the same match, Rochdale’s third goal was the perfect illustration of Norrington-Davies’ attacking importance to the team. 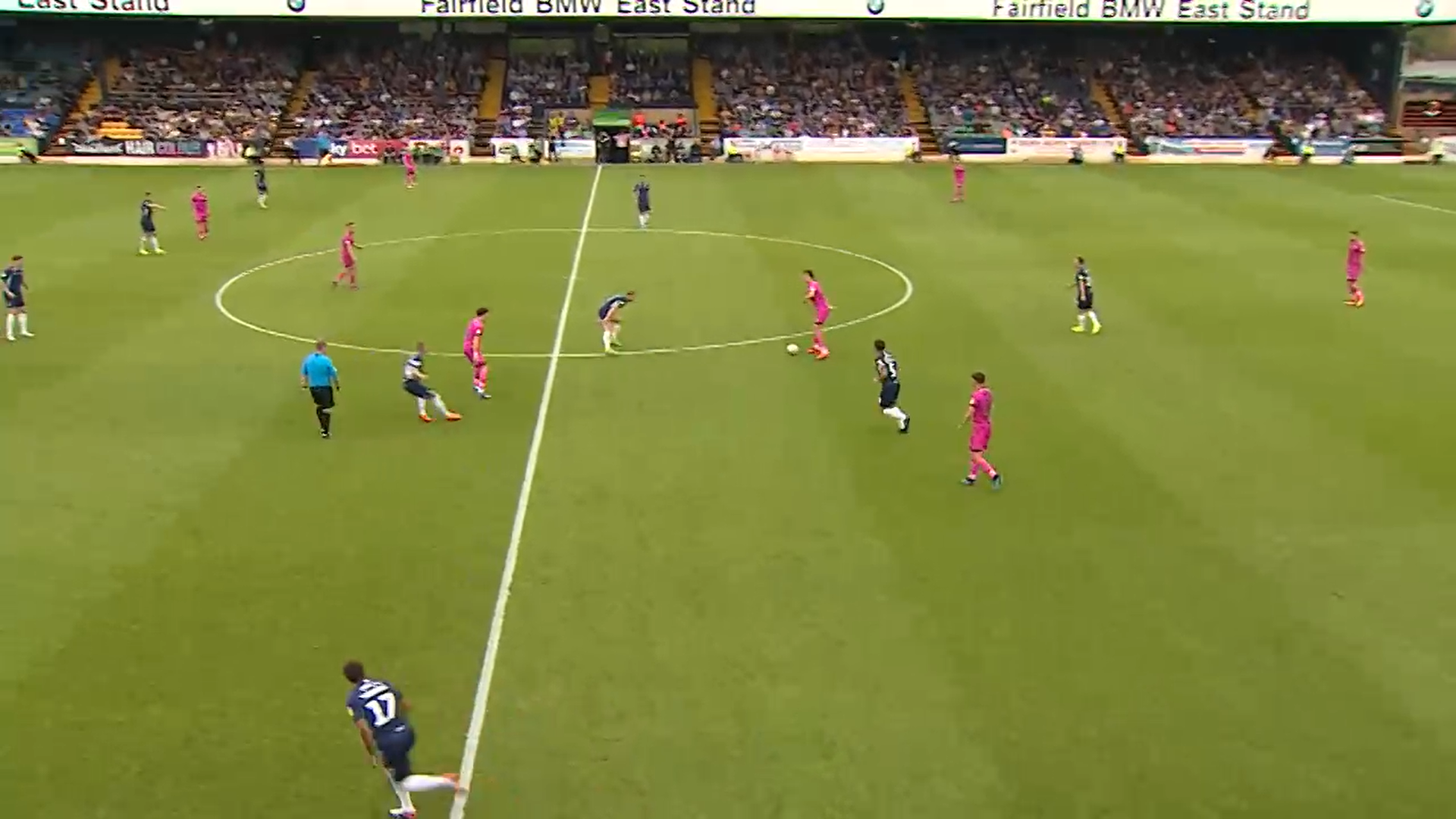 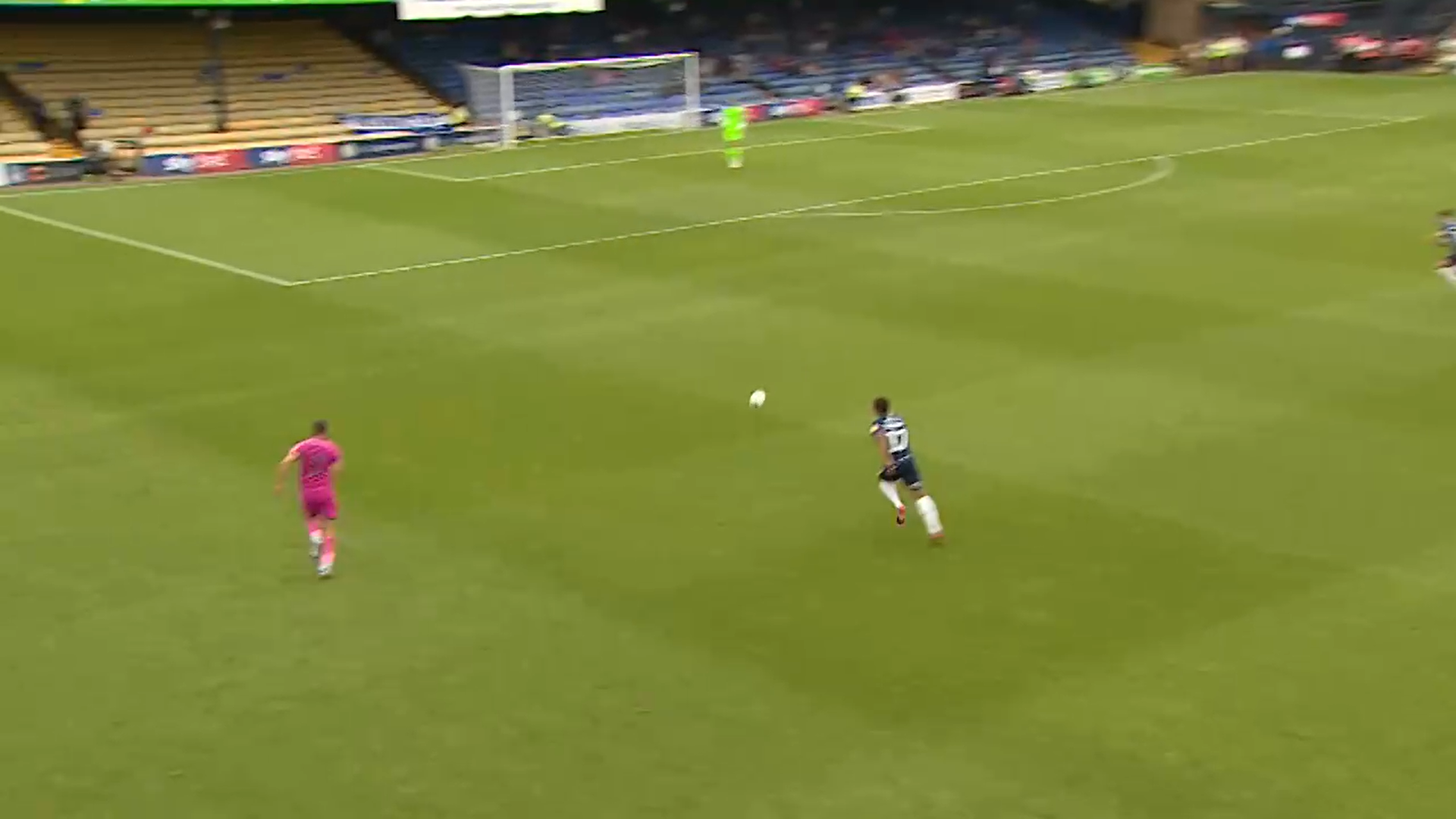 Situated wide on the left touchline, he allowed Dale to commit several players infield as they looked to overload such areas in order to retain and build (image one above). Once they had kept the ball and an opening was created, Williams was then able to feed a pass through to the run of the left-back, whose aggressive positioning had allowed Rochdale to retain width in their attack. 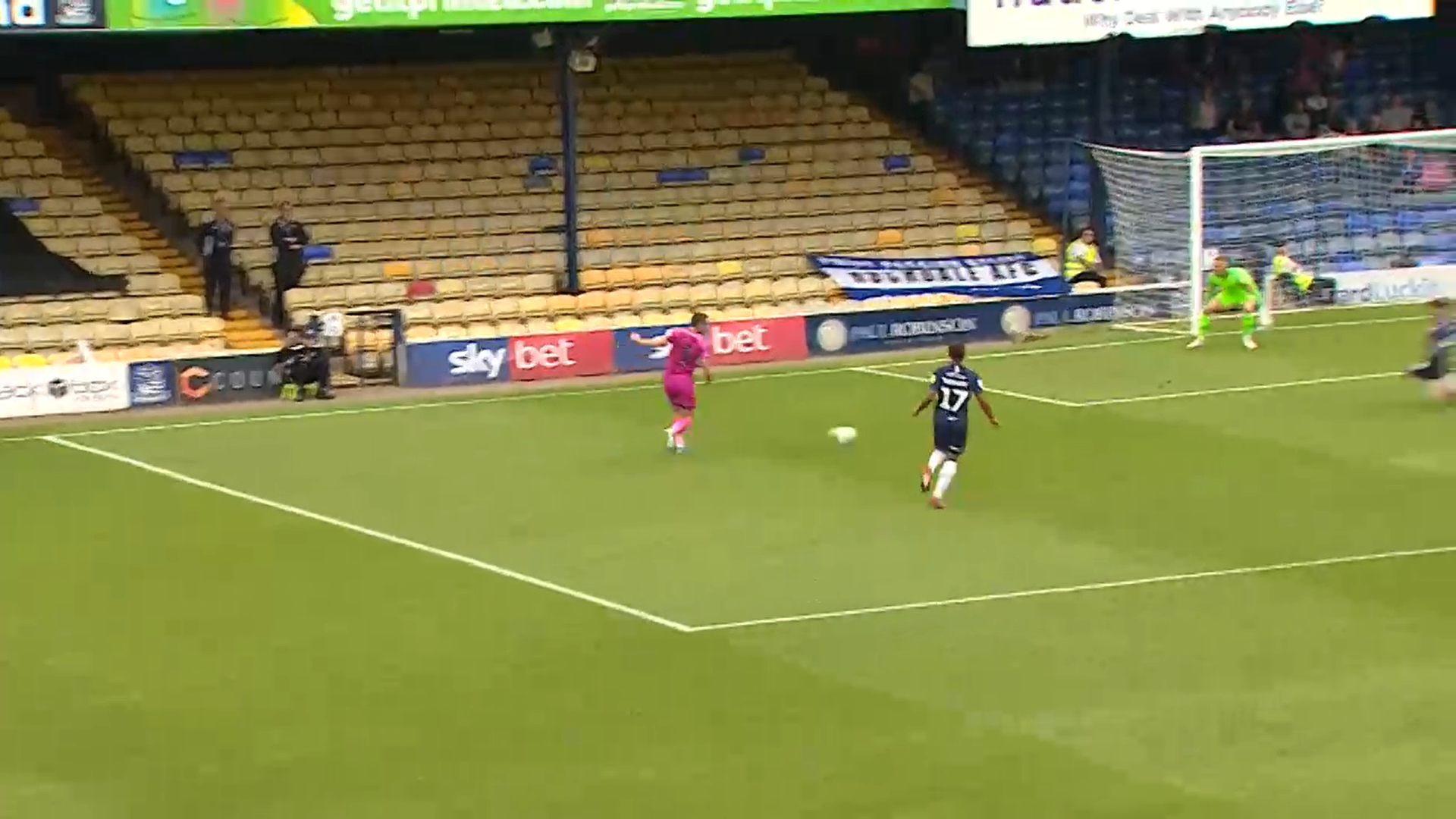 When the ball had been played through, he drove at goal before reaching the touchline, cutting the ball back and seeing it slammed home for their third goal of the day. 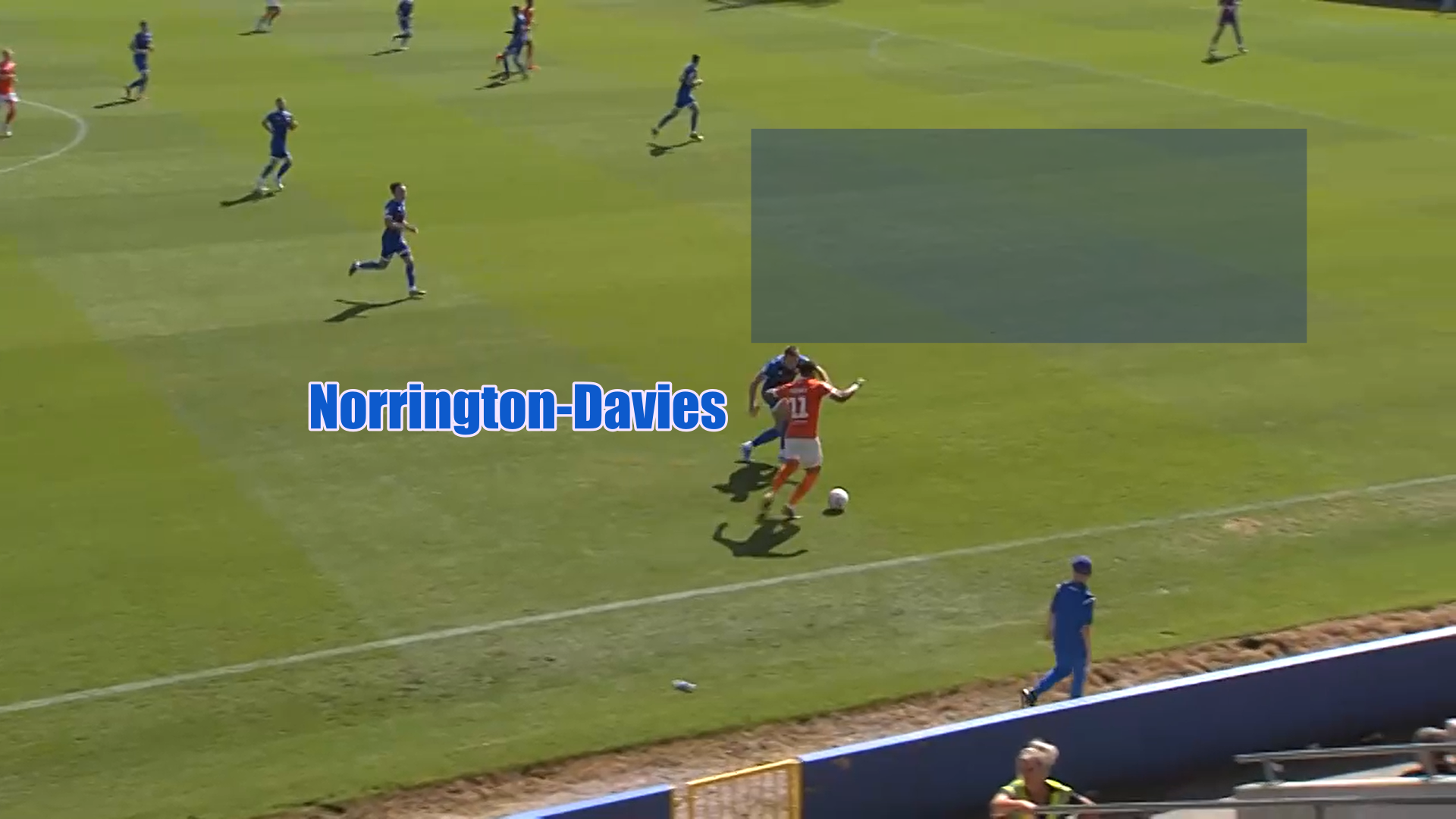 As is the case when attacking, he is quite an aggressive full-back who prefers to engage opposing wingers as opposed to sitting off them and giving them time and space on the ball. This can be seen below, where he chooses to risk leaving a large space in behind him in favour of engaging the winger and looking to beat him in a one-versus-one battle instead. He is clearly confident in both his own pace and mobility as if he felt it was a risk he would have likely sat off the winger in order to protect the space, instead trusting that he would be able to nullify his opponent in their direct battle. He uses the nearby touchline to his advantage by closing the possible space in front of the winger, and therefore reducing the number of ways he can go with the ball – in turn, making it easier to defend against. 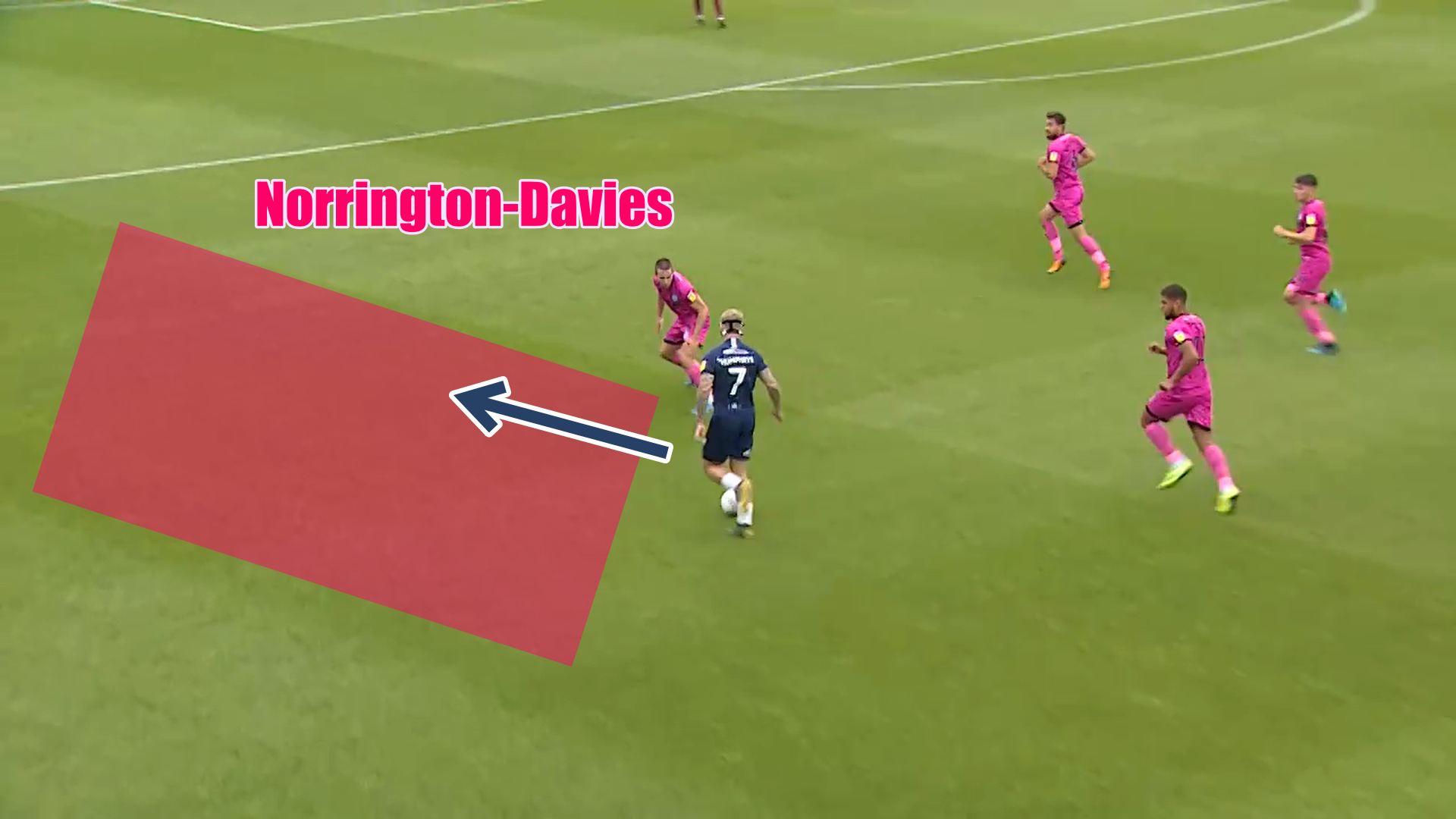 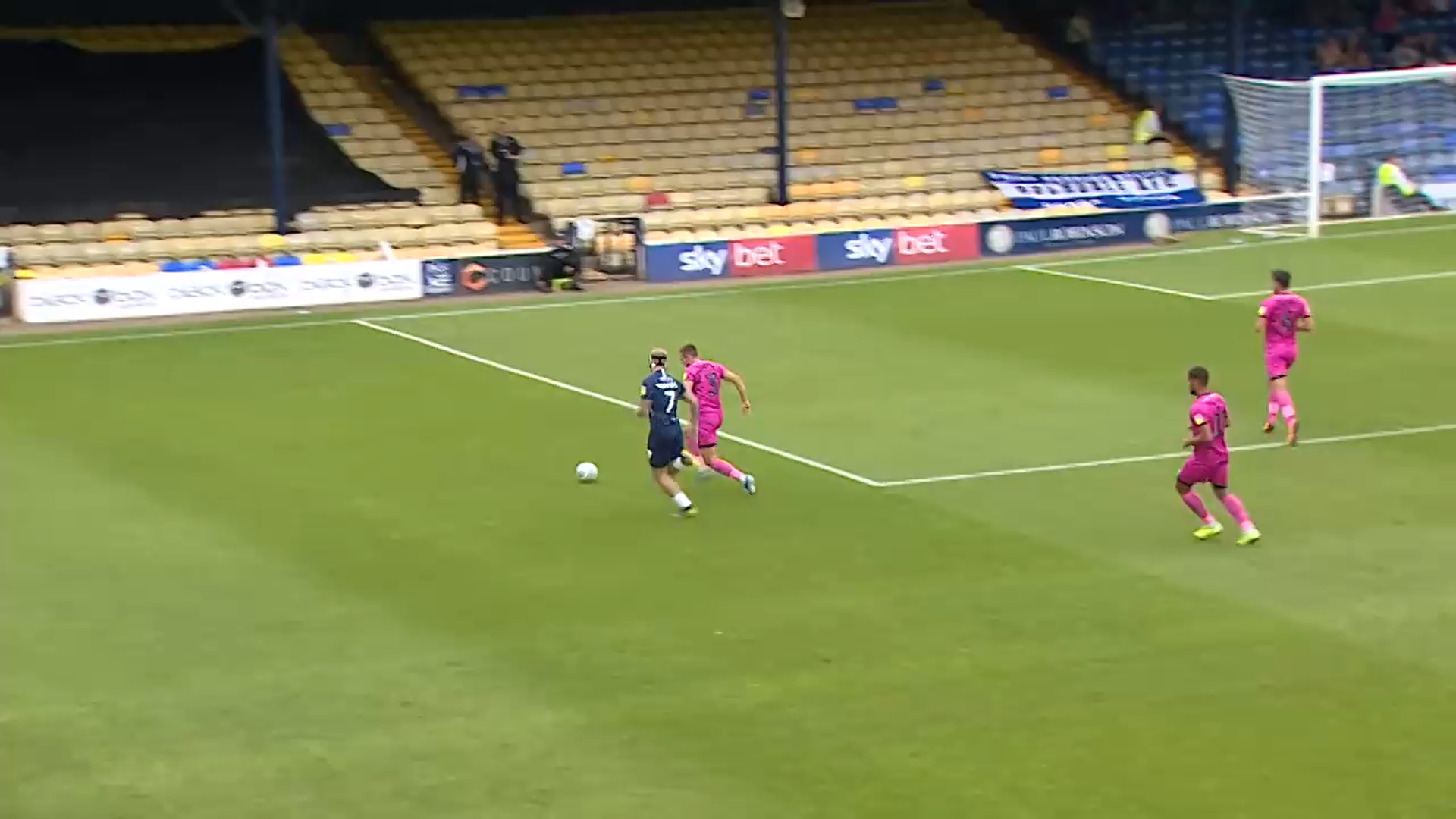 His one-versus-one defensive strengths are also highlighted again below, where he shows his man down the outside and towards the touchline, doing so through lining up his feet on the inside of the attacker, so that he has minimal room to cut inside, and if he does then there are three teammates who will be able to snuff out any potential danger from then on. Once the forward does look to beat him on the outside, he shows his speed by getting in front of the striker and ensuring he is between him and the ball so that the striker cannot get to it.

Both Norrington-Davies and his team have caught the eye already this campaign through a series of impressive displays. The defender has shown himself to be a vital part of Dale’s armoury for both his defensive and offensive skills, and will surely only continue to get stronger the more he plays League One football. If he can continue his rate of improvement he will surely be given the chance to prove himself at a higher level – whether that be with his parent club or elsewhere.