Swansea City entertained Hull City in their opening match of the 2019/20 Sky Bet Championship season on Saturday. Both teams were taking to the field for the first time under their new managers – Steve Cooper and Grant McCann respectively – and were looking to kick off their campaigns in style.

Despite taking a second-minute lead through Kamil Grosicki, Hull succumbed 2-1 thanks to two goals in as many minutes by the hosts just after half time. In this tactical analysis, we will provide an in-depth look at the tactics utilised by both sides, and use analysis to show how the Swans came out on top. 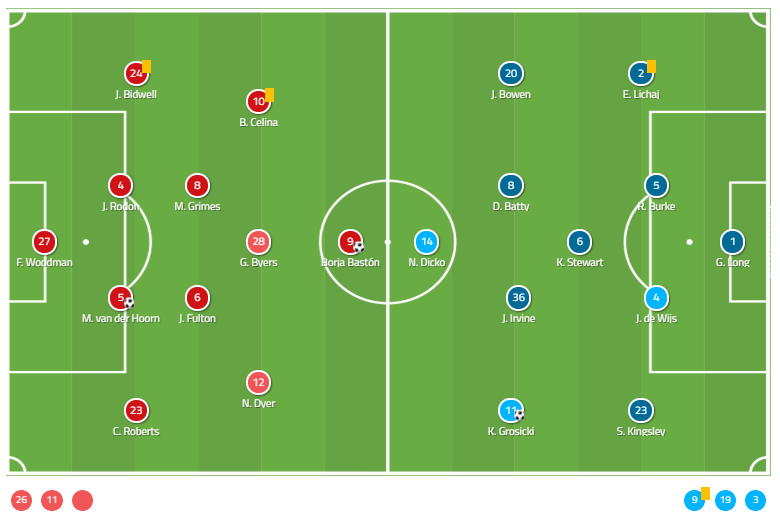 The home team were set up in a 4-2-3-1 formation by new boss Cooper, with Jay Fulton and Matt Grimes tasked with providing defensive protection in order to allow the attacking talents of offensive quartet Bersant Celina, George Byers, Nathan Dyer and Borja Baston to flourish. Grimes operated as a single pivot, looking to receive the ball from his defenders and use his smart passing range to fashion opportunities in the final third. In contrast, Fulton had more of a box-to-box role, as he looked to use his energy and stamina to get around the pitch to provide support.

As for the Tigers, McCann started with a 4-5-1 for the clash at the Liberty Stadium. The trio of Kevin Stewart, Daniel Batty and Jackson Irvine were the central midfield three, and all had slightly different responsibilities: Stewart to mainly give defensive solidity at the base; Batty to get up and down to aid both defensively and offensively; and Irvine as the most forward-thinking of the three to support lone striker Nouha Dicko.

Within Swansea’s system, the responsibility for the majority of their creativity in-and-around the penalty area falls upon the shoulders of Celina, Byers and Dyer. They are the mercurial talents whose jobs are simple: make things happen. The defensive protection they are given by Grimes and Fulton allows them to wholly concentrate on their attacking roles, and as a result, gives them the best possible chance of allowing their creative abilities to flourish. McCann clearly recognised this, and instructed his team to, quite understandably, look to prevent giving the triumvirate any large spaces in which to operate within.

The Tigers’ midfield was very compact, stifling any possible gaps from opening in order to reduce the chances of the Swansea attackers from having time on the ball. They looked to produce a lot of traffic centrally in order to prevent the Swans from playing through them, with the distance between the defence and midfield minimal.

As can be seen below, the defensive and midfield lines are highlighted. The Hull midfield are compact in order to reduce the space between themselves and their defensive colleagues from becoming too great. They would look to ensure any such gaps were as small as possible – such as the highlighted area in the graphic – in order to not allow Byers (the central of the three Swans attackers) to get on the ball and demonstrate his superb technique with the ball at his feet. Furthermore, the Hull midfield three were always goalside of Fulton and Grimes so that, if one of the two made a late third-man run beyond the ball in order to give greater numbers for their side, they were able to recognise and combat this also.

With the pace and trickery of Celina and Dyer out wide, the pair looked to hug the touchline, permanently situating themselves outside of their full-back in order to make the pitch as wide as possible and thereby hope to pull apart the compact Hull defensive shape. McCann did not want to give the duo either spaces behind their full-backs in which to run into, or time on the ball upon them receiving possession in order to be able to coordinate themselves and look to attack their defender. As a result, the positioning, relationship and understanding between the Hull full-backs and wide midfielders was crucial in not allowing the Swans’ wide men from wreaking havoc.

When possession was being circulated in the Swansea midfield with the aim of supplying either of Celina or Dyer in their defensive or central third, as soon as either of the two received the ball the Hull full-backs would instantly press them aggressively to ensure that they did not have the chance to run at them and fully put their pace and skill to good effect. This reactive pressing stifled the Swans of any width and therefore neutralised a large part of their attacking threat in the process.

Below is one such occasion where this occurred, with Eric Lichaj closing down Celina. In this example Celina does not have time to receive the ball, get his head up, survey possible options and then make a decision: he must do all of this in a fraction of second whilst being mercilessly hounded.

In addition to this, the relationship between full-back and wide midfielder was crucial in stopping the Swans’ wide attackers within the attacking third – however, it was the discipline of the whole team that allowed such defensive solidity.

Firstly, the Hull midfielders would line up narrowly in order to prevent gaps opening in central passing lanes, Byers being able to receive the ball in space and thus being played through via their defensive heart. The specific positioning that was vital here was the relative positions of full-back and wide midfielder: the wide midfielder must always be on the inside passing lane to that of the defender – in other words, diagonally in front of him. So, for the right-back, the right midfielder must be in front of him and diagonally to his left, whilst for the left-back, the left midfielder must be in front of him and diagonally to his right. This would then minimise the chance of the full-back having a ball played through inside of him between himself and his nearest central defender – as the midfielder was screening any such option – and could allow him to fully focus on the winger to his outside. If a ball was able to be squeezed between full-back and midfielder, the covering central defender would then be in a position to deal with any such danger. This can be seen in evidence below.

To piece all of the aforementioned details together we can look at the image below.

Central defender Mike van der Hoorn was in possession on the halfway line. Such is the narrow shape of the Hull midfield – and specifically left midfielder Grosicki – he has no options to play line-breaking passes to centrally and therefore must go wide. When he plays the ball out to Dyer, Kingsley is immediately pressing him in order to not allow him any space. As he is already on the touchline he cannot go around his man on the outside, and Grosicki is covering centrally too – meaning he would have to beat two men here if he were to be successful.

Build up from the back and wide overloads

Since the days of Roberto Martinez and Brendon Rodgers in particular, Swansea have had a reputation of being a side who play extremely easy-on-the-eye football and look to build up from the back when attacking – and it appears to be no different under new boss Cooper.

When goalkeeper Freddie Woodman was in possession, Cooper instructed his defenders to split, a central midfielder to drop in and his full-backs to position themselves high. These movements then made sure that they had options is as many horizontal and vertical passing lanes as possible in order to make it difficult for Hull to try and close them down and press. It would allow them to circulate the ball well with plenty of options, and utilise the whole width of the pitch when looking to construct an attack.

Additionally, as they had had no luck before with utilising wide spaces, Cooper also instructed his full-backs to provide greater options in attack to try and dominate in such areas. If he was able to dominate out wide then this would give his men a greater chance of opening up areas centrally as a result. Therefore, full-backs Connor Roberts and Jake Bidwell were clearly told to operate as wing-backs almost as they looked to take charge of the ball out wide. The following image is one such example of this, with Roberts overlapping Dyer after a quick switch of play – and creating a two-versus-one out wide. This alteration worked – as their first goal came after a cross from the right-hand side.

Hull operated within a medium-to-low block for much of the match, content to sit off the Swans’ backline, and give them time and space on the ball, as is illustrated by the below image where all of Hull’s players are within their own half when the ball is on the halfway line.

They were in no rush to get drawn out of their defensive shape in order to press the Swansea defenders, content instead to drop off and challenge their opponents to try and play through their compact defensive shape.

However, when they fell behind, this understandably shifted.

Whilst previously they were allowing Swansea plenty of time on the ball, now they were looking to pin their hosts in and now allow them to get on the ball and play. As is illustrated below – an image taken shortly after a short Swans goal kick – all of the Hull midfield and attack are now hunting for the ball and looking to dispossess Swansea. They produce a six-versus-five overload here in the opposing half such is their will to win the ball back near the goal, and when contrasted with the above information from earlier in the game, is the polar opposite to their initial approach.

Yet, Cooper is clearly a man of great principle – much like his two predecessors discussed before. He did not abandon his possession-based style of play as a result of Hull’s new tactic and continued to look to drop Grimes in to overload from deep in order to give themselves the best possible chance of retaining the ball and progressing up the pitch.

McCann must take encouragement from his team managing to frustrate Swansea, nullifying their strengths whilst also allowing his own side to flourish. The fact that both Swans goals came from balls into the box – the first from a cross, the second a second phase after a corner – shows that Hull were disciplined in open play, however ultimately lacked that ruthless edge needed to collect three points. As for Cooper, he will be delighted not just at collecting three points from his first match, but that his side were able to overcome such tricky opponents.