Bristol City’s surge towards the Championship play-offs continued on Saturday with a 2-0 home against Swansea City, the Swans’ first defeat of 2019. In this tactical analysis, we’ll look in detail at both teams’ setups, the key tactical battles and how Bristol City maintained their excellent run of form.

The win for Lee Johnson’s men, their seventh in a row in all competitions, sees them edge into the top six ahead of Derby County on goal difference as former Chelsea legend Frank Lampard’s side dropped points against Preston North End.

Following another eventful deadline for Swansea City to say the least, manager Graham Potter was lacking an attacking outlet and this proved to be their downfall. Leroy Fer’s loan to Aston Villa fell through but he was missing anyway through injury. Jefferson Montero completed a move to West Brom while Dan James’ expected move to Leeds United failed in the final hour. He was left out of the squad having missed training late last week.

The teams and setups

After recent success with a 4-3-3 formation, Swansea manager Graham Potter switched back to a 4-2-3-1. He had to bring in the likes of George Byers, Joel Asoro and Luciano Narsingh to his matchday squad following further outgoings on transfer deadline day.

Bristol City adopted a 4-4-1-1 system which dropped back into a solid 4-4-2 block that proved to be difficult for Swansea City to penetrate throughout during the 90 minutes. 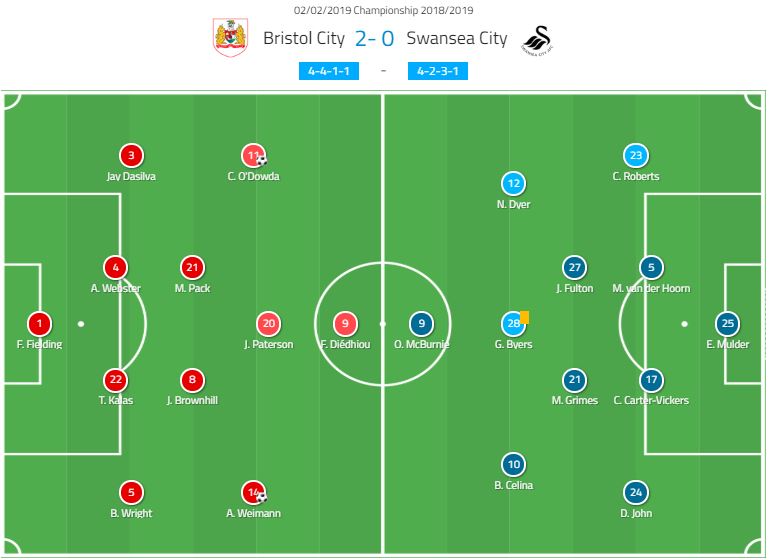 Bristol City did press high in the early part of the game but they soon dropped back into a solid, narrow 4-4-2 defensive shape as shown below.

One of the Bristol City strikers pushes forward to press Matt Grimes who often dropped deep in between the two centre-backs to start attacking moves from deep. Up against a narrow Bristol City side, Swansea City’s best hopes of getting forward were via the full-backs down the flanks.

It was the same for the home side too. Both needed to switch the play away from congested areas, and Bristol City proved to be the better of the two at doing this. Compared to the visitors, they had more space to attack in wide areas due to their effective switch of play from one side to another.

Looking at the above, Bristol City were able to switch play from one side of the pitch to the other, forcing the Swans to quickly track back and providing themselves with open space to attack into.

After switching play, Lee Johnson’s side would quickly switch it back across. They were constantly looking to move their opposition from side to side and to open up gaps through the channels.

The above screenshot also shows the need for Swansea to move their right-back Connor Roberts out of the defensive line to track Bristol City’s attacking left-back. This left a huge gap between Roberts and right centre-back Mike van der Hoorn. Fortunately, it didn’t prove to be too much of a worry for Swansea in the first half with no half-space runners.

Swansea also looked to switch the play but they didn’t do as effective a job as their opponents. Not only that, they didn’t look to switch play as frequently as their hosts, often preferring to play much shorter and quicker passes in midfield.

Below, Matt Grimes decides against a long pass over to the far left side where Declan John has space ahead of him, despite having shown an excellent long-pass ability as a deep-lying midfielder. Often in these situations, Grimes would look to play the shorter pass with Celina available in the centre-circle. 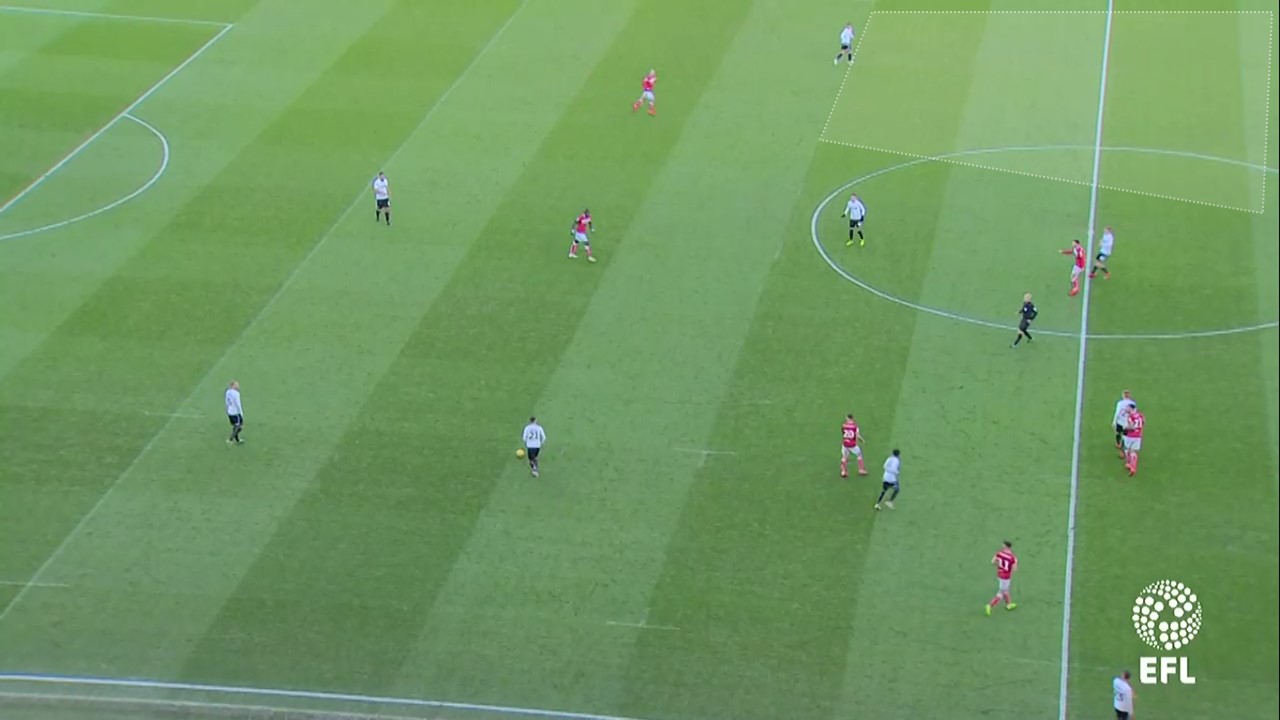 Having possession slightly further forward and nearer to the centre circle in his own half, Grimes now decides to release left-back John down the left side. The former Rangers full-back has struggled to earn a regular starting place for Swansea this season. This was his best performance of the season, however, and he was their best outlet during the game. 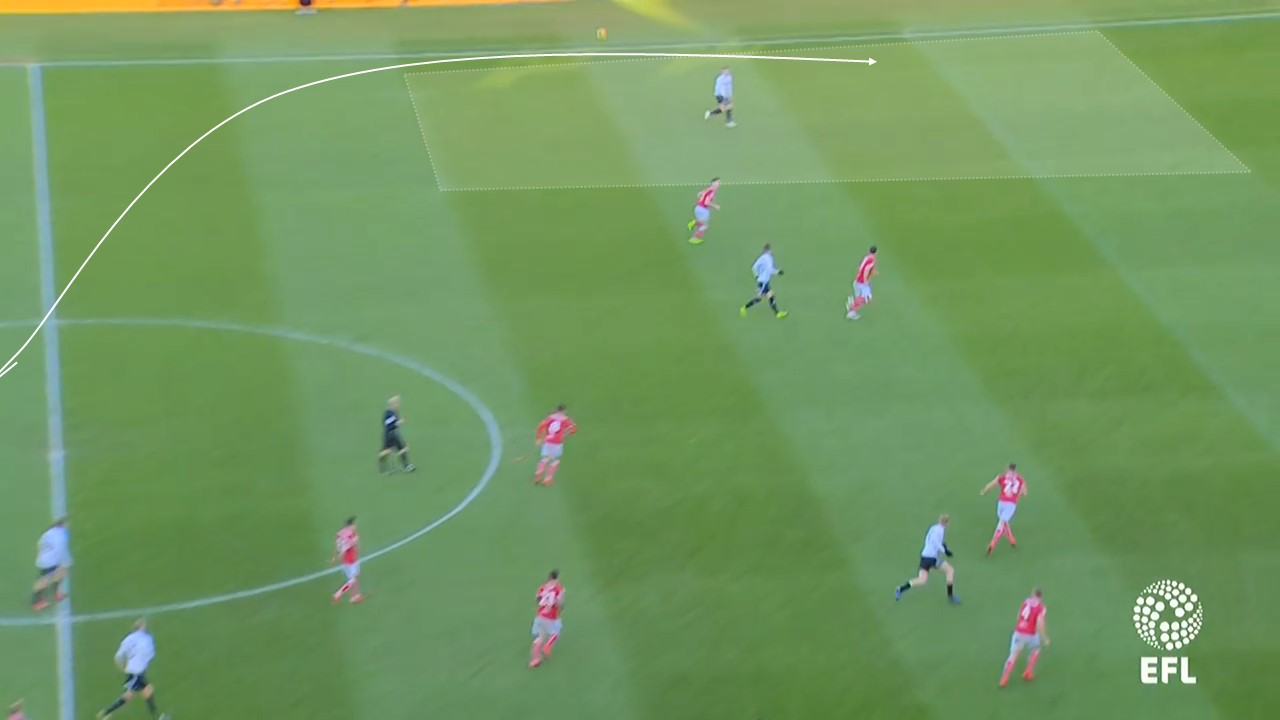 Bristol City were effective at forcing Swansea down the sides as their narrow defensive shape congested the middle of the pitch. When the ball did go out to the flanks, Swansea often had to go backwards as the hosts blocked the inside channel as shown below. 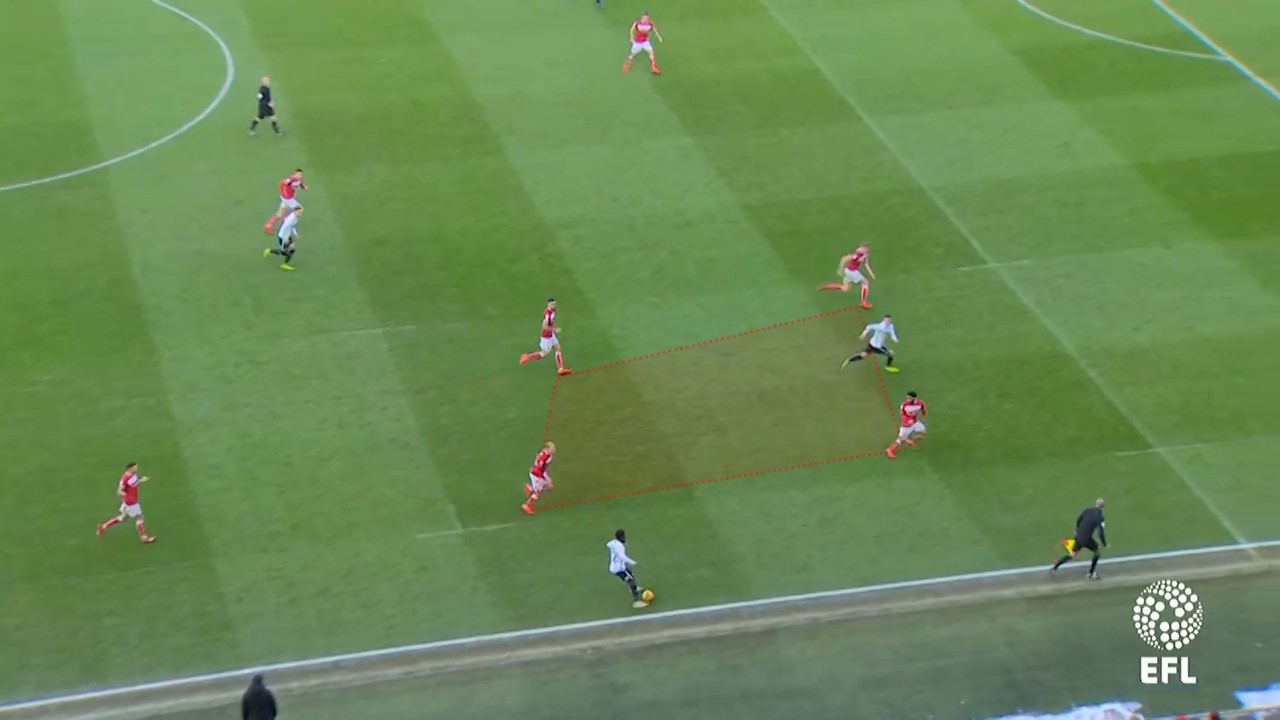 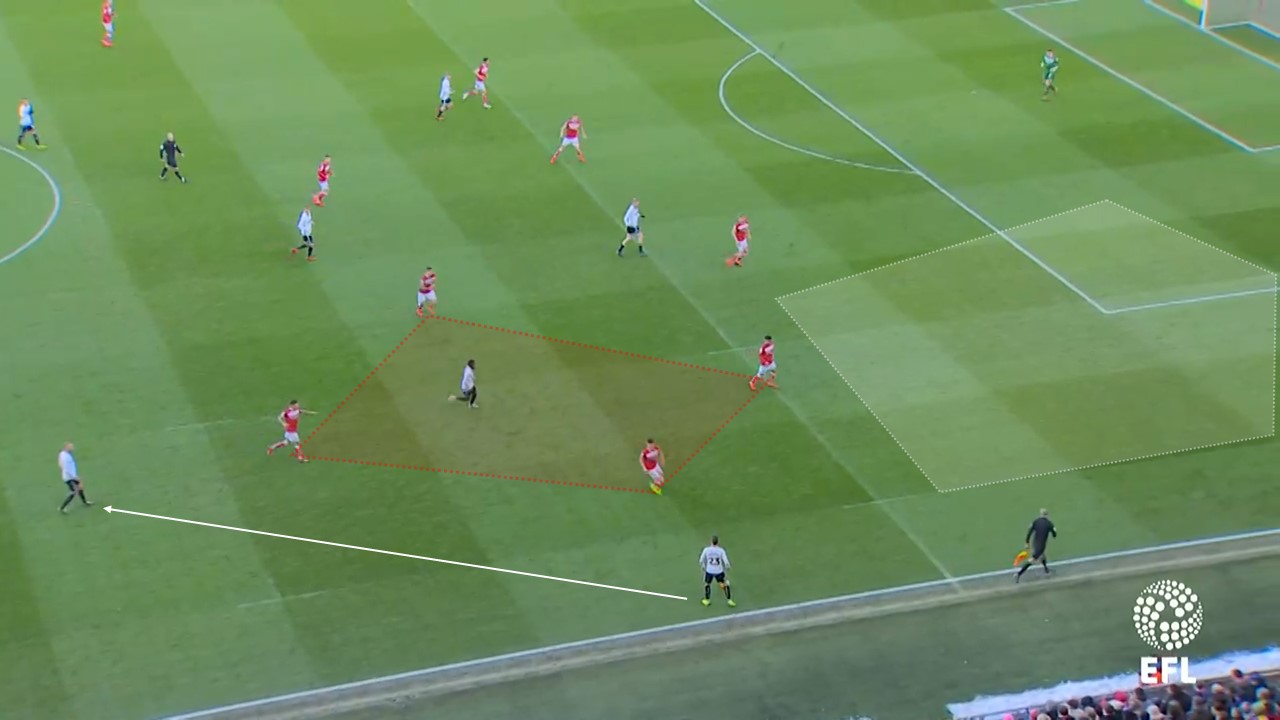 Bristol City also blocked passing lanes through the middle and into wide options which stressed the need for longer, diagonal passes to release the full-backs.

Below, Grimes has to aim a long diagonal pass towards the right back as Bristol City block passing lanes to release John. Lee Johnson’s side later realised that the latter was Swansea’s best method of getting balls into the penalty area. After taking the lead early in the second half, they dropped back further, shifting a player out to mark him closely and thus forming a back five. 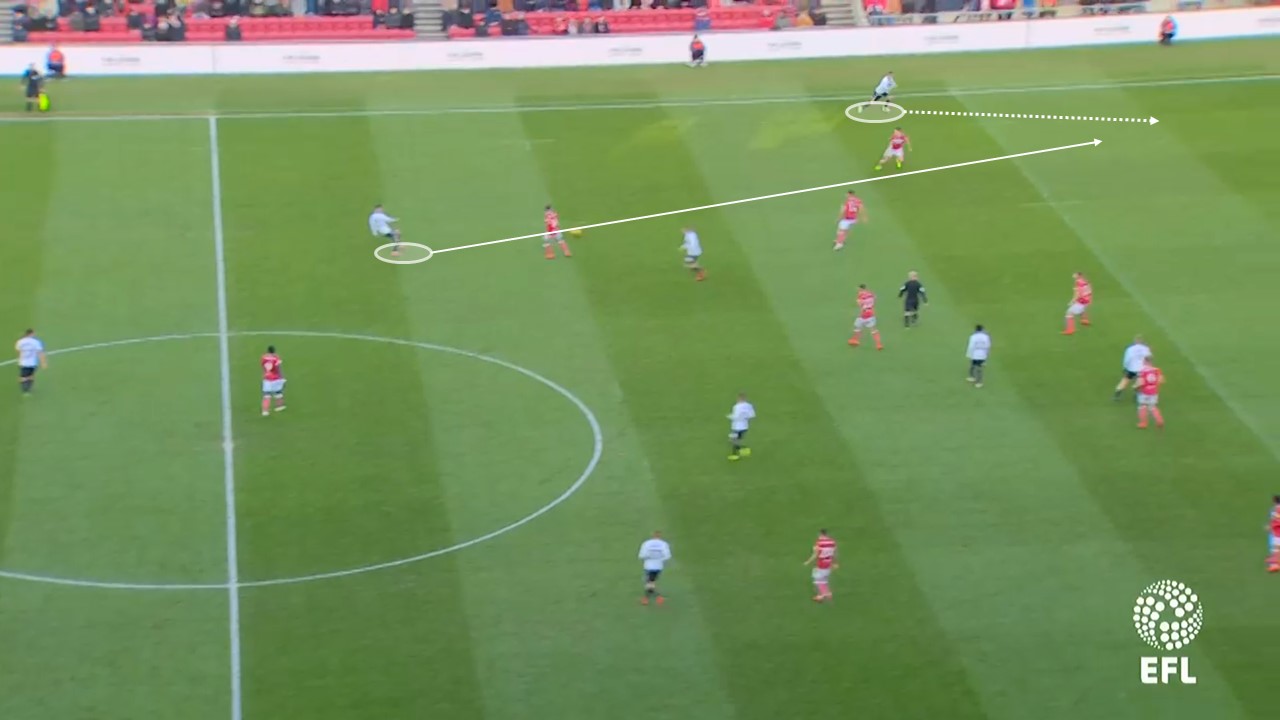 Both sides adopted narrow defensive shapes and they both looked to release their full-backs to get the ball into space in behind. 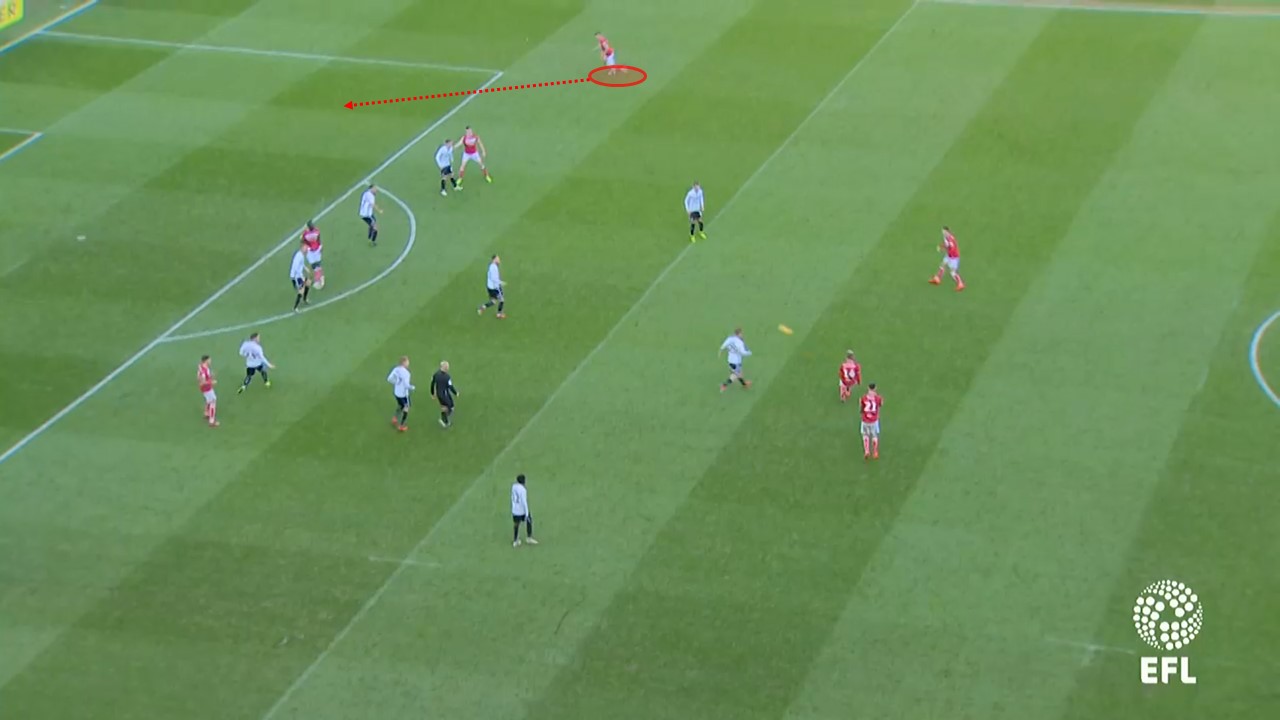 The only difference between the two setups was Swansea City left Oli McBurnie (out of the picture) further forward as an out-ball option from deep, as shown below as they sit in a 4-4-1-1.

The first half saw two well-drilled sides cancel each other out. Declan John was Swansea’s best source of getting the ball into good shooting positions inside the box, but the saves made by the home goalkeeper were relatively comfortable ones.

Bristol City should have taken the lead shortly before half-time after a quick counter-attack following a Swansea corner. This got them into a 5v3 situation as Swansea were desperately trying to track back. The final shot on goal came in as they created a one-on-one situation, but it was aimed too directly at the goalkeeper who was able to make the save and keep the game goalless going into the break.

Bristol City were gifted the lead within the first minute of the second half. A poor mistake from Swansea came when they left five players concentrated in a tight area in their own right-hand side of the pitch. They regain possession in this area, but Jay Fulton keeps hold of the ball and is soon dispossessed near the touchline.

You can see Bristol City’s number 20 Jamie Paterson available in space if his side can regain possession above. They do, and they release him down the left in plenty of space. He sends in a cross and Andreas Weimann heads it beyond the goalkeeper’s reach and into the bottom left corner of the net. 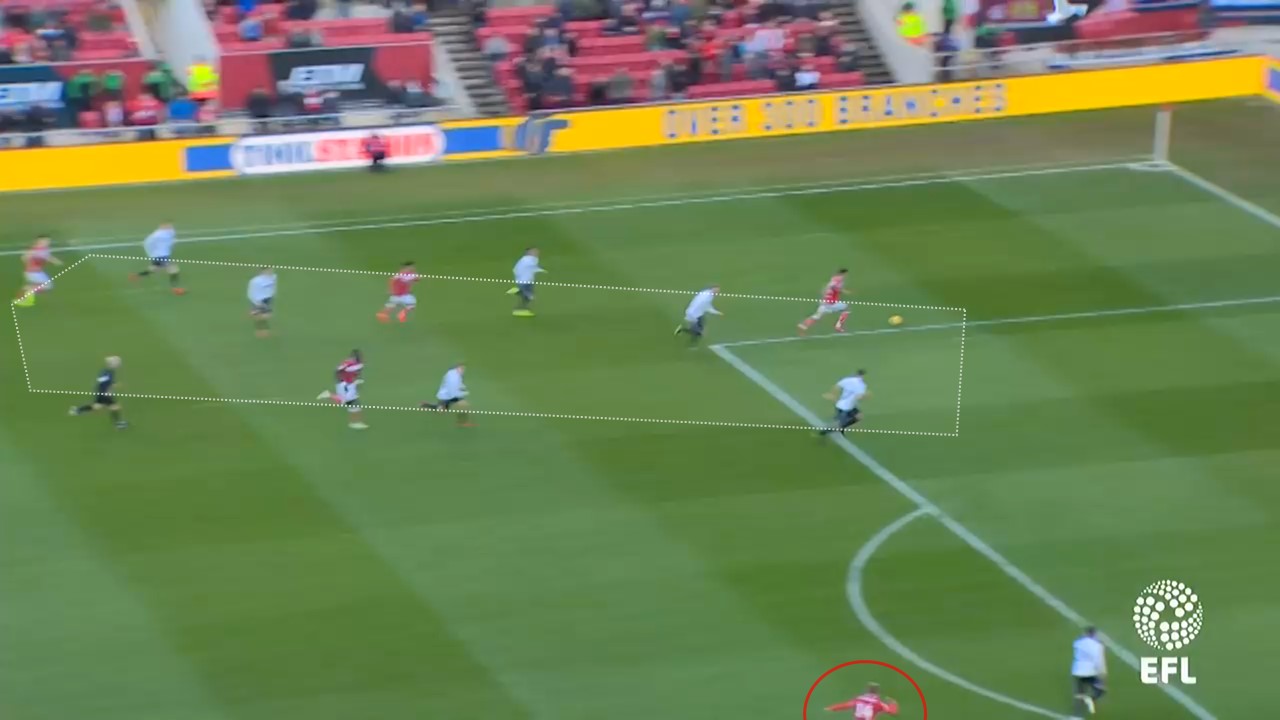 In an effort to help his team get back into the game, Swansea City boss Graham Potter made a number of tactical and personnel changes. Bristol City, with a 1-0 lead, were happy to sit deeper with a back five and hope to catch Swansea on the counter. This approach worked as despite making changes, the Swans still couldn’t find a way to break through.

Potter’s first change saw Oli McBurnie and Nathan Dyer swapping roles. McBurnie moved out to the right after Dyer had struggled to hold on to possession in that position in the first half. Dyer moved to the middle forming a diamond with Fulton and Byers on each side with Grimes remaining deep. 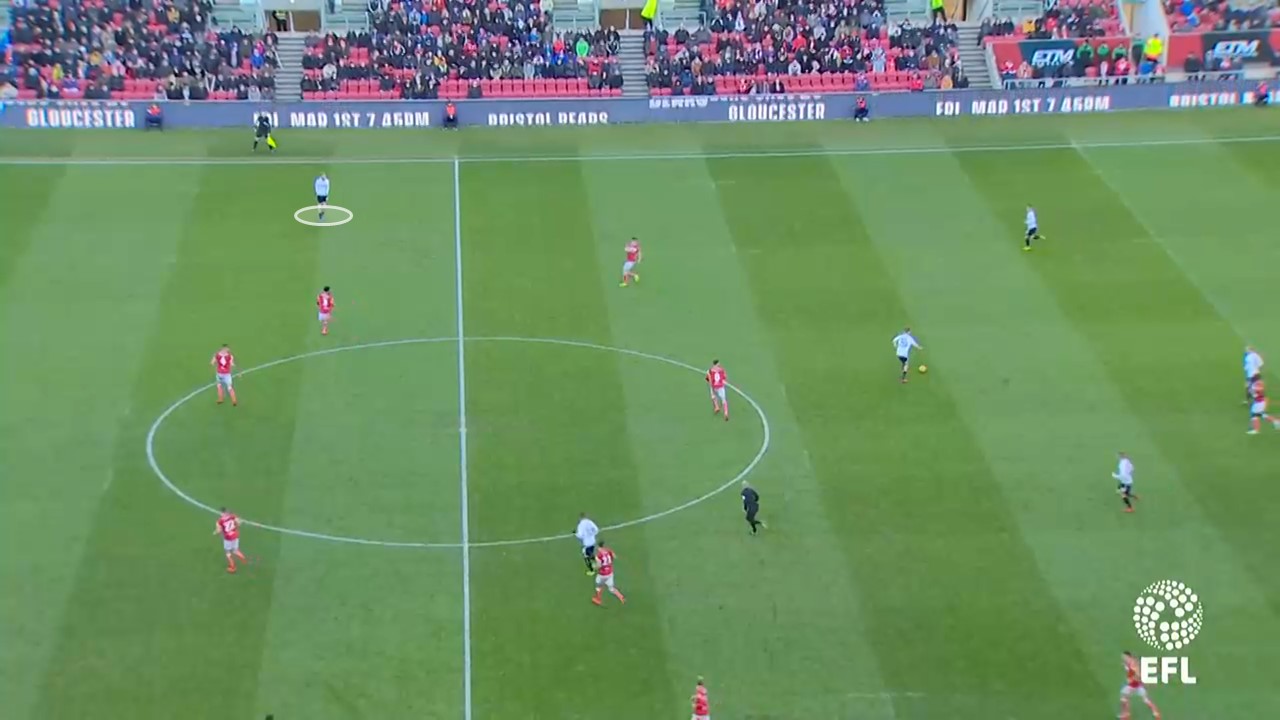 As you can see below, Bristol City remained compact and narrow, forcing Swansea City down the sides. What’s worth pointing out in the screenshot below is the position of Bristol City striker Famara Diedhiou. He blocks a passing lane to Mike van der Hoorn, who’s usually Swansea’s key man when it comes to vertical passes from the defensive line.

Bristol City also have two players on either side of their narrow shape blocking passes out wide to the full-backs, forcing Grimes to often play short passes across the backline. Far too often there were opportunities where he had the time and space to hit long diagonals but he often chose the shorter option.

As we mentioned earlier, recognising that left-back Declan John was Swansea’s most effective outlet down the left, Bristol City aimed to pin him back in the second half (below). 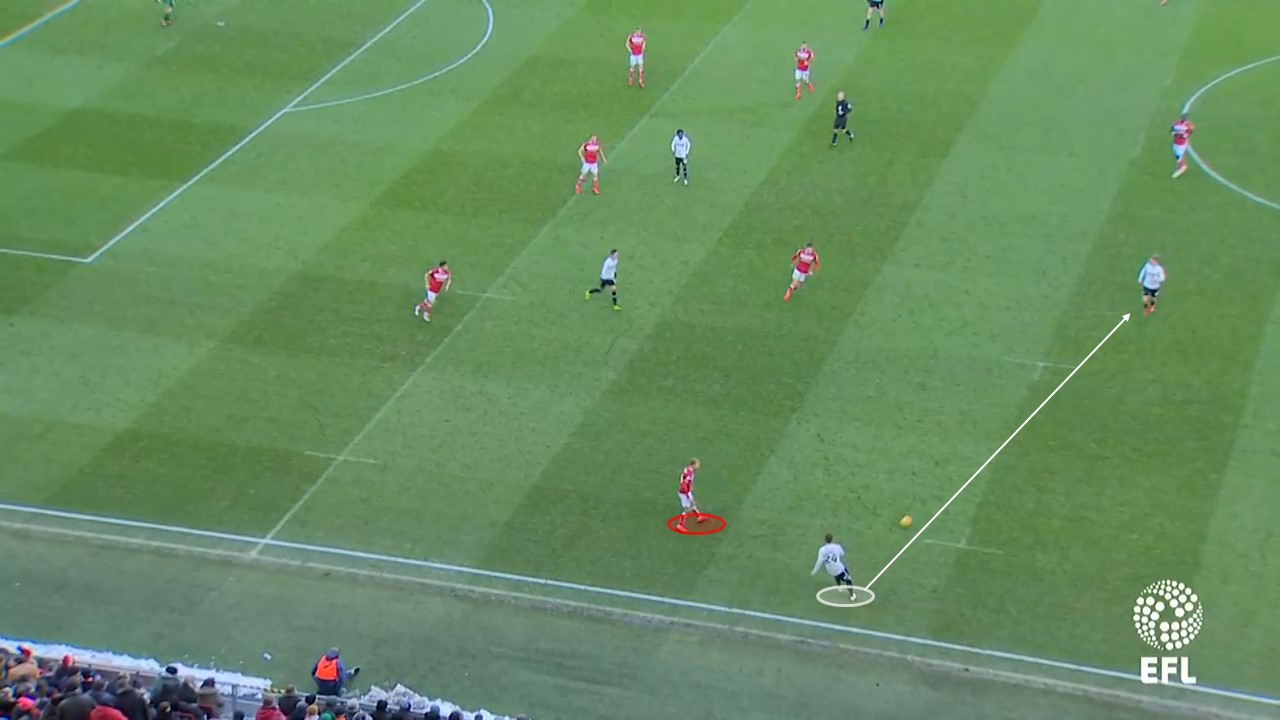 Compared to the screenshot before the one above that shows Swansea’s deep build-up play against Bristol City’s narrow defensive setup, the one below shows the home side building from the back.

The main comparison here is how Bristol City are more spaced out across the pitch while Swansea looked to get players involved through the middle. They have four players in a wide left position, giving them a numerical advantage if they choose to hit a long diagonal. With Swansea’s midfielders needing to spread out to track the wide players, there’s more open space. 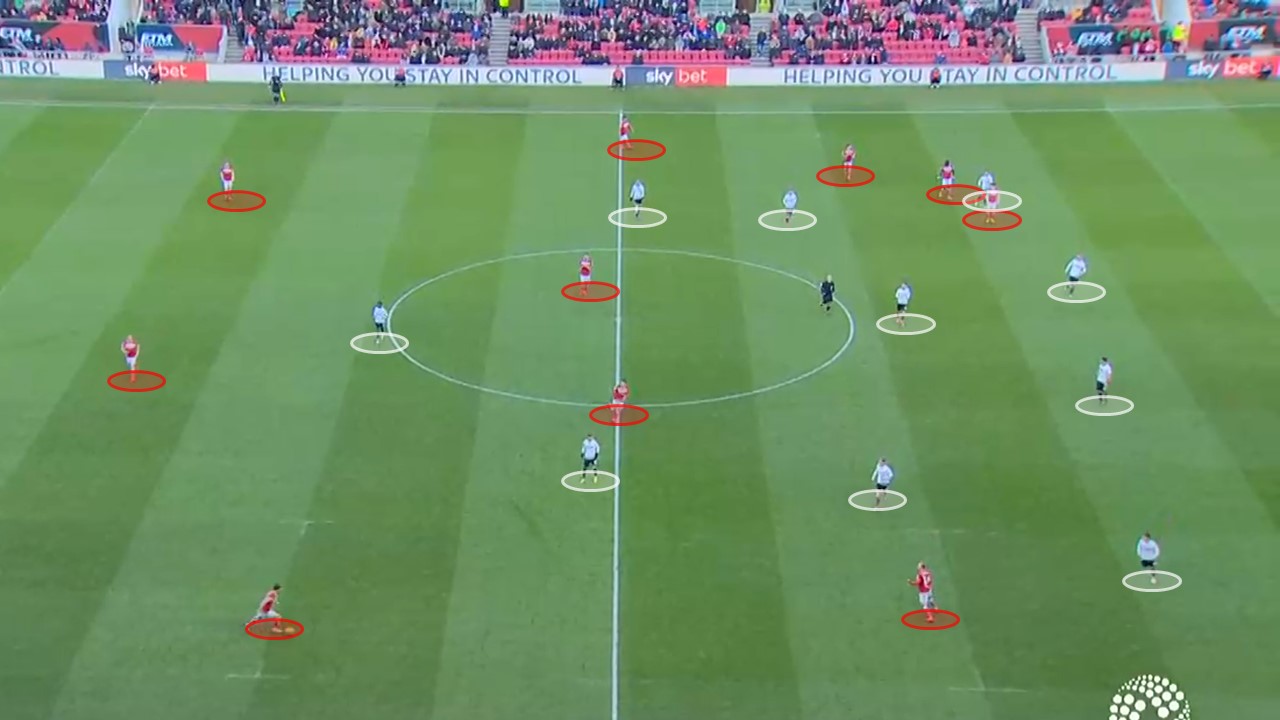 Swansea’s struggles to penetrate through Bristol City’s deep defensive line continued with very little space between the lines, as shown below. They sit in a 4-3-3 defensive shape here with their left-sided midfielder able to drop back to create a back five when required. 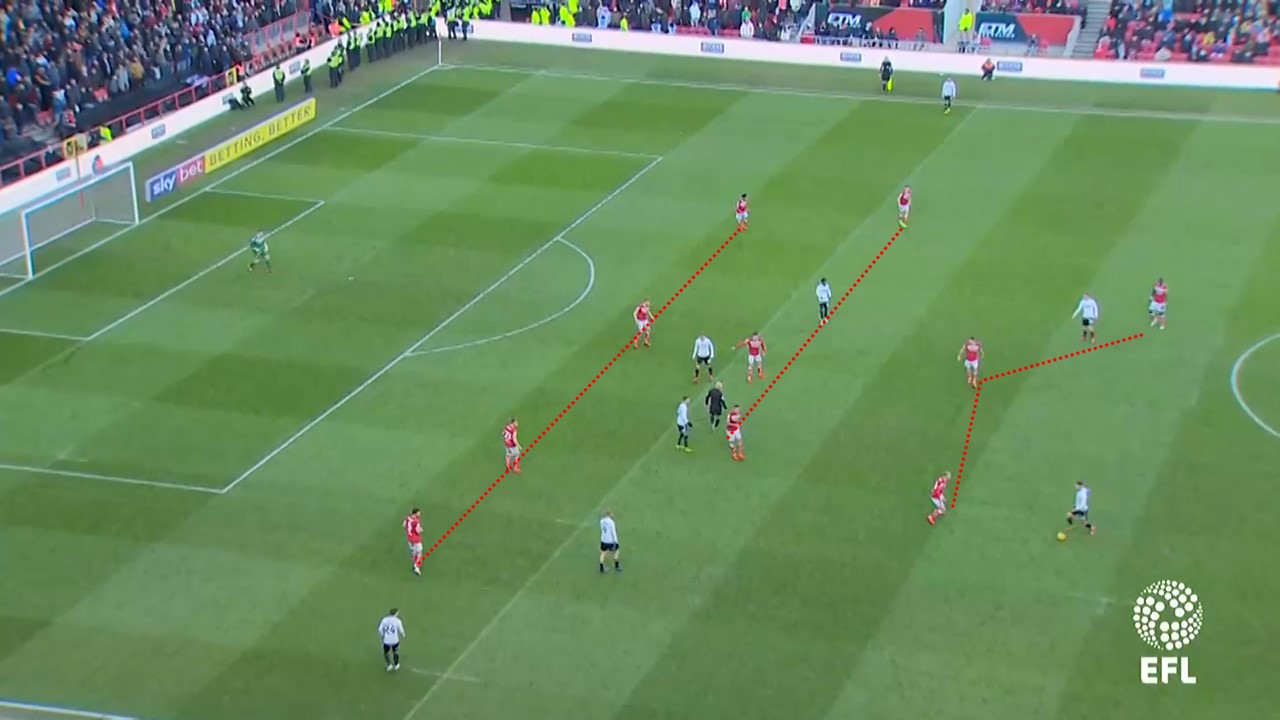 Swansea City were also too slow in possession and in moving the ball to opposite sides of the pitch. This allowed the hosts to quickly get across and close down the gaps through the wide channels.

Graham Potter later made a change, adding Joel Asoro in the hope that he could cause a threat with his pace. Initially, he directly replaced Nathan Dyer through the middle, before Potter later made another switch, moving McBurnie in the middle alongside substitute striker Courtney Baker-Richardson with Asoro hugging the right touchline.

The former Sunderland forward has been out of the senior team for a number of months now having failed to impress following his £2m move from the League One outfit in the summer and it showed. 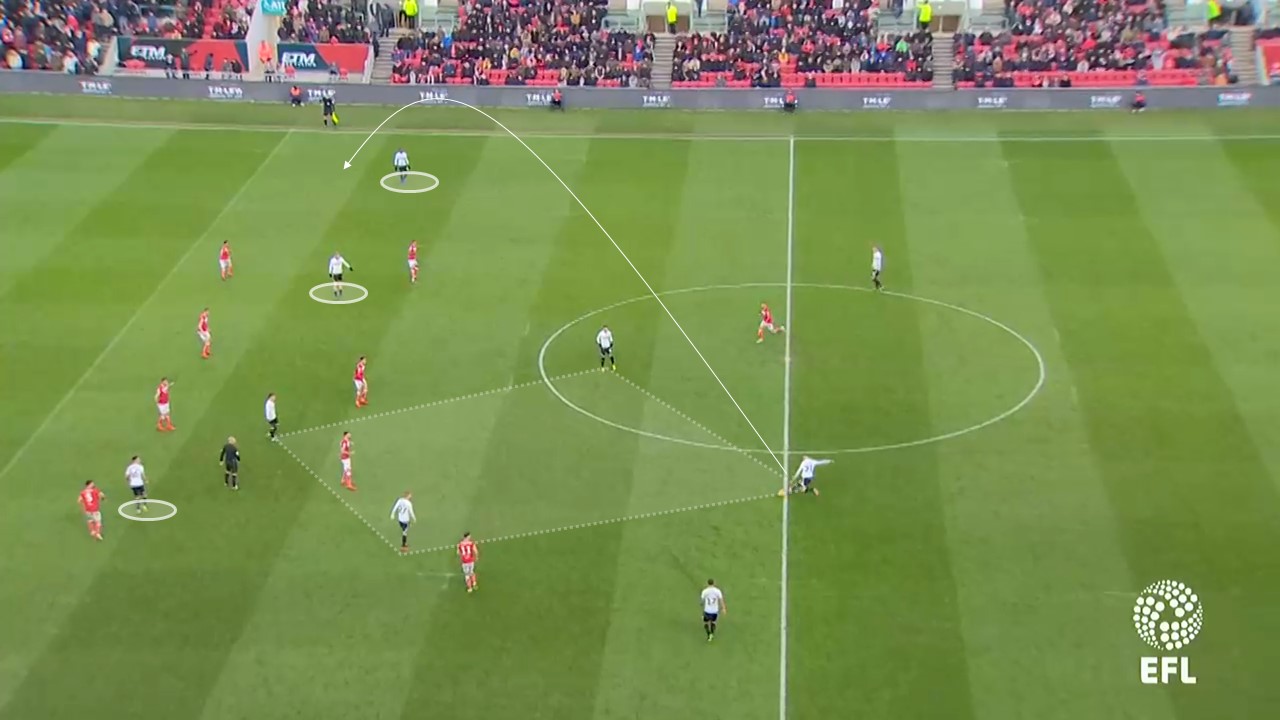 Bristol City made it 2-0 with 16 minutes  of normal time remaining, and it was another soft goal to concede from Swansea’s point of view. Following an unconventional long and high clearance from Spurs loanee Cameron Carter-Vickers, Bristol City win possession. They then feed the ball through Swansea’s half and in behind the defensive line for Callum O’Dowda to slot it underneath goalkeeper Erwin Mulder. 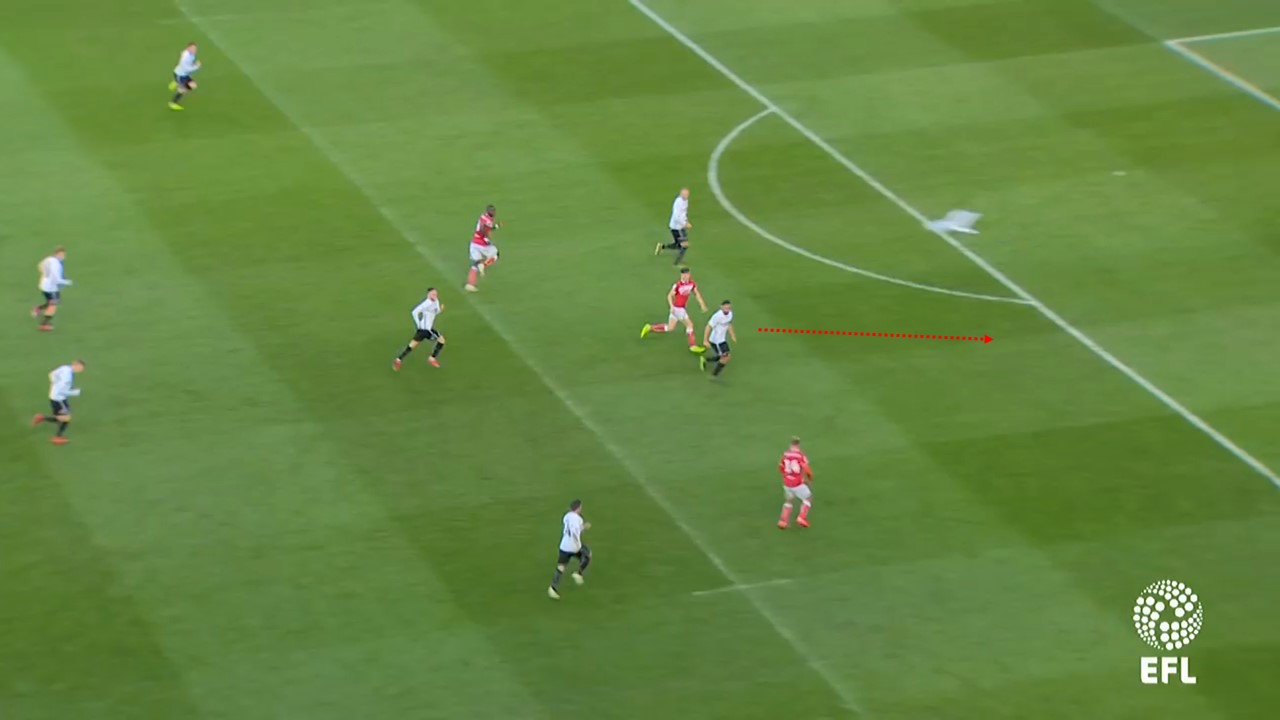 The hosts almost made it 3-0 with a similar position but this time the effort on goal was saved (below). 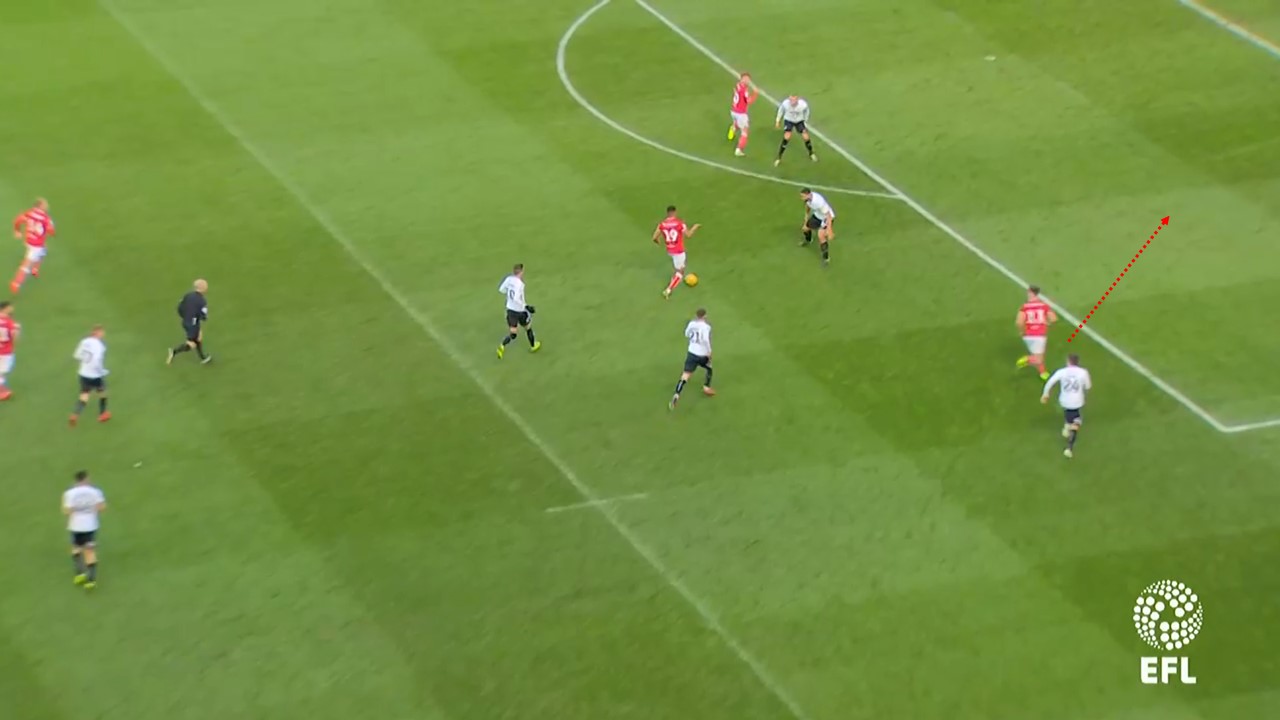 Bristol City’s march towards the playoffs continues with their seventh consecutive victory in all competitions and another solid defensive display. However, after failing to beat 10-man Birmingham City at home last Tuesday and this 2-0 defeat at Ashton Gate – ending their unbeaten run start to the new year – Swansea’s own playoff hopes still look out of reach.

Without Dan James or Jefferson Montero as starters or as options from the bench, Swansea were desperately limited for an attacking outlet. They have relied heavily on pace and trickery in wide positions, using James’ pace to chase balls in behind. On Tuesday night they had Montero’s trickery to create two goals to rescue a point against Birmingham City. Without those elements, they had to rely on more intricate passing through the middle, but this only created half chances, most of which came from long range.