There was a very important game at the City Ground this weekend as Nottingham Forest hosted Bristol City. Both teams were standing close to the play-off places in the table and this game could have taken either one them closer to that all-important top six.

It promised to be an interesting encounter between two teams in the Championship with different styles of attacking football. In this tactical analysis we will have a look at how both teams manifested themselves going forward and the change in formation that won Bristol the game.

Former Republic of Ireland boss Martin O’Neill came in as the new Nottingham Forest manager. The club legend chose to start with a 4-4-2 formation with Grabban and Murphy playing as the two strikers. He had to set out a different team to their defeat earlier against Reading. The away team hadn’t been beaten in 10 games and Bristol City’s Lee Johnson opted for a 4-1-4-1 formation with captain Pack playing between the defence and midfield.

The home team remained in the 4-4-2 formation throughout the game. The introduction of Guedioura and Dias as subs didn’t not affect the formation. Bristol did make a change however, with Johnson switching to a 4-4-1-1 formation after Palmer came on in the 64th minute. The move certainly had its effect on the game, since Diedhiou’s winner was a result of that change in formation.

Nottingham Forest wanted to establish themselves with an attacking style of play with their new manager. On paper they played a 4-4-2 formation, but in attack Forest changed their formation to a 4-3-3. In this formation Grabban and Murphy were still the strikers, but were joined by deep-lying midfielder Lolley who played as a winger on those occasions.

Lolley played as a right winger, and tried to get the ball into the box to Murphy and Grabban. In total there 14 attacks down the right flank, mostly conducted by Lolley, which accounted for 23% of all Forest’s attacks.

The other option when in possession of the ball was for the central defenders to pass to left-back Osborn. Whereas Lolley was posing as a deep-lying midfielder on the right, Osborn did the same as a deep-lying defender. He tried to distribute the ball to the strikers with decent crosses.

There were always three players in the box to try and convert those chances supplied by either Osborn or Lolley. On this occasion Grabban and Murphy were joined by midfielder Colback. Forest had a quite clear yet conservative plan of attack: the central defenders got the ball, then tried to find the left-back Osborne or right midfielder Lolley. They would then swing a cross in, hoping that the strikers and attacking midfielders would convert those chances. O’Neill stuck to this plan all afternoon, without success.

Bristol City seemed to have a rather clear plan when it came to attacking. Their 4-1-4-1 formation contained a very important role for captain Pack, who served as a fifth defender without the ball and as the fifth midfielder with it. 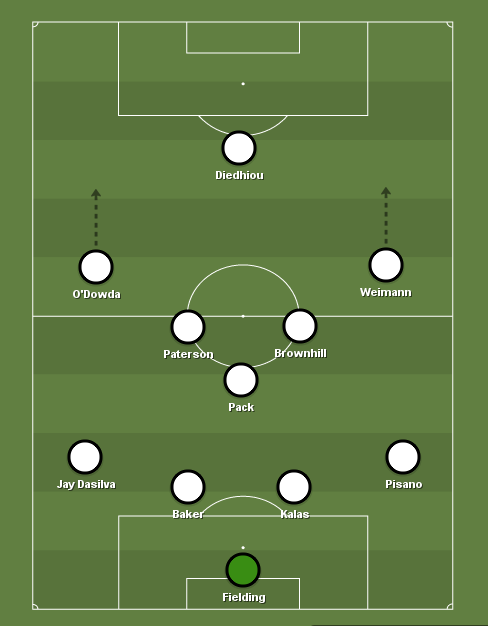 In this formation O’Dowda and Weimann were given the task of running down the line and get crosses in for Diedhiou, assisted by central midfielders Paterson and Brownhill. The wide midfielders changed position twice, but this was the plan until the 64th minute, after which Johnson intervened. 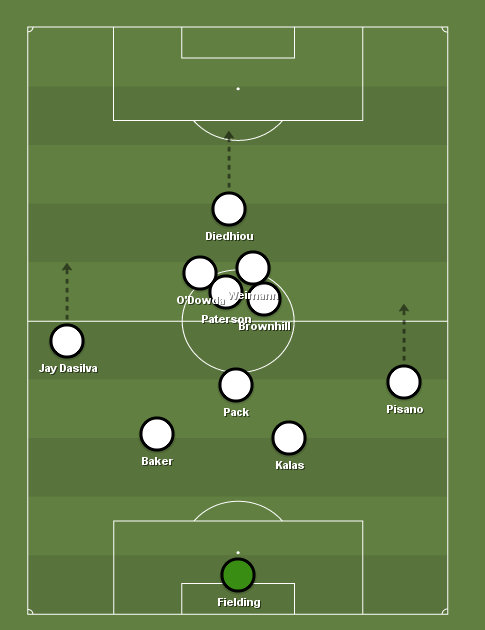 The visitors’ attacking plan wasn’t that different from their opponents’. Both the left-back and right-back had a huge contribution to each attack by Bristol City. They were more direct and put more players in their attack.

The full-backs were playing high, and key to the distribution to them was Brownhill. He saw the movement of Pisano as seen above and the movement of Jay Dasilva, as seen below.

Jay Dasilva and Pisano got forward down the line and on occasion produced a decent cross, which Diedhiou assisted by O’Dowda, Weimann, Paterson or Brownhill, tried to convert.

Bristol tried to attack through this strategy, but were not successful for a long period in the game. Although their attacking football was quite direct, their initial approach to the game was one of pragmatism and trying to hold off the opposition dominance.

Bristol City changed their formation after an hour of play. Johnson had seen enough of the game to see that Nottingham Forest couldn’t capitalise on their dominance and were not sharp enough finishing their chances. Bristol then changed their formation, sensing there was a result to get at the City Ground and move up the Championship table. They changed from a 4-1-4-1 formation to a 4-4-1-1 formation, after Palmer came on for Paterson.

Throughout the game Bristol tried to give a lot of through balls, but they weren’t very successful. This was because there was only on striker up front who had little support going forward in those situations. With the change of formation, Diedhiou had support from Palmer, and that created a higher chance of converting a decent through ball into a goal.

Where earlier in the game a through-ball was only chased by one player in the 4-1-4-1 formation, now both Weimann and Diedhiou were targets for Palmer in the more dominant 4-4-1-1 formation.

Weimann can get after Palmer’s pas and gives the assist to Diedhiou’s goal in the 70th minute of the game. This would prove to be the winner, and justify Johnson’s bold move to play two strikers.

Both teams were ranked closely to each other in the Championship table before the game. Nottingham Forest were looking for a good start under their new manager, but were quite conservative with their 4-4-2 approach to the game.

Bristol City were quite conservative as well, playing the same attacking football style as their opponents. However, the change in the 64th minute to move to a 4-4-1-1 formation, rather than a 4-1-4-1 formation, made sure that Bristol City went home with the three points and left Forest with a lot of work to do.