Swansea City’s outside chances of a play-off place took a blow on Tuesday evening as they needed a late 94th minute injury time equaliser. It did, however, maintain their unbeaten start to 2019 against 10-man Birmingham City.

In our tactical analysis of this Championship clash, we’ll take a look at the key tactical battles and how Birmingham’s long-ball style proved to be problematic for the more stylish Swans. It was a significant contract in styles. Garry Monk’s Blues were happy to sit back in their own half and limit the gaps through the channels, relying on quick counters and long balls from the goalkeeper to create attacking opportunities.

Swansea City, meanwhile, have been devastating at times since the turn of the year with their quick transitions and good vertical passing. Birmingham City were keen to prevent the hosts from playing to these strengths.

Graham Potter switched from a 4-2-3-1 to a 4-3-3 after its success in the Championship clash against Sheffield United and FA Cup against Gillingham. Matt Grimes played as a deep-lying midfielder, slotting in between the two centre-backs to start play from deep with Fer and Celina ahead of him.

Former Swansea City manager and Blues boss Garry Monk adopted a standard 4-4-2, sitting back in a deep block and looking to play long-balls to their front two. 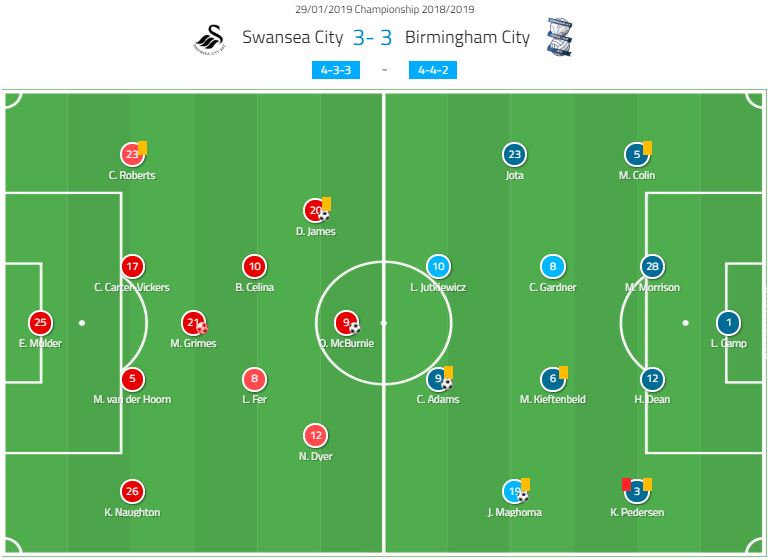 Swans too predictable, Birmingham block the right side

Swansea City were able to dominate large periods of the game due to Birmingham’s willingness to sit deep. However, the home side were far too predictable in their build-up play early on, overly relying on the right-hand side of the pitch to progress forward. Birmingham always ensured that they had players well positioned to block the vertical passes from former Ajax defender Mike van der Hoorn.

With no success from low forward passes down the wide right channel, Van der Hoorn was soon forced to lift his passes for the likes of Nathan Dyer to chase in behind.

Birmingham also made good use of their front two in their 4-4-2 defensive block, ensuring that both strikers were well placed to block passes into both Matt Grimes and Leroy Fer.

The touch map below shows the average touches for the first 10 minutes of the match and you can see Swansea’s early dependence on the right side of the pitch with four players averaging touches in this area ahead of Van der Hoorn.

Swansea needed to switch their play and look for alternative routes down the opposite side of the pitch, but they persisted on trying to make strides down the right. 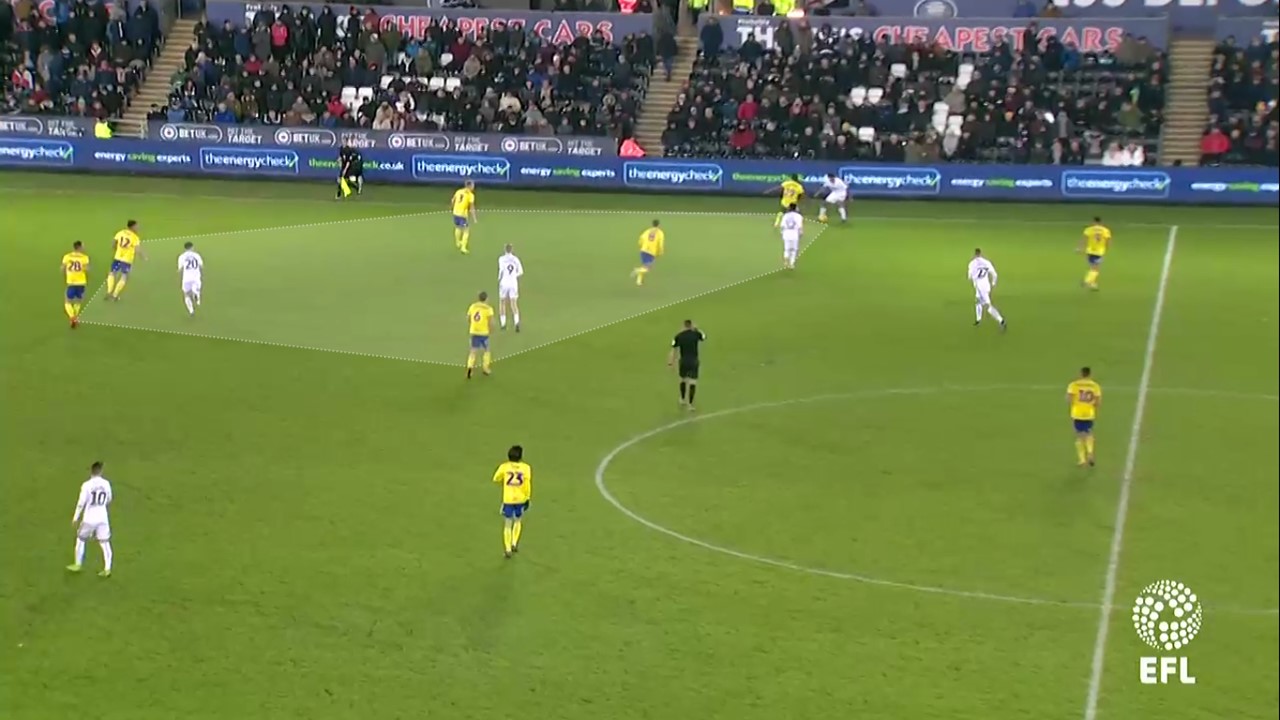 Playing alongside Mike van der Hoorn, Cameron Carter-Vickers rarely, if ever, looked to make a forward pass as he constantly shifted the ball across to his Dutch team-mate to build moves from the back.

Below shows a typical movement of the ball from Carter-Vickers. The right-sided midfielder, Jay Fulton, moves out to the right flank in preparation for the pass from Van der Hoorn as he looks to anchor the play down that side.

In an effort to help their attempts to attack down the right, Swansea City made a minor switch. Winger Nathan Dyer dropped deep to help link up the passes, filling the gap left behind by Jay Fulton who moved out to the touchline as shown below. 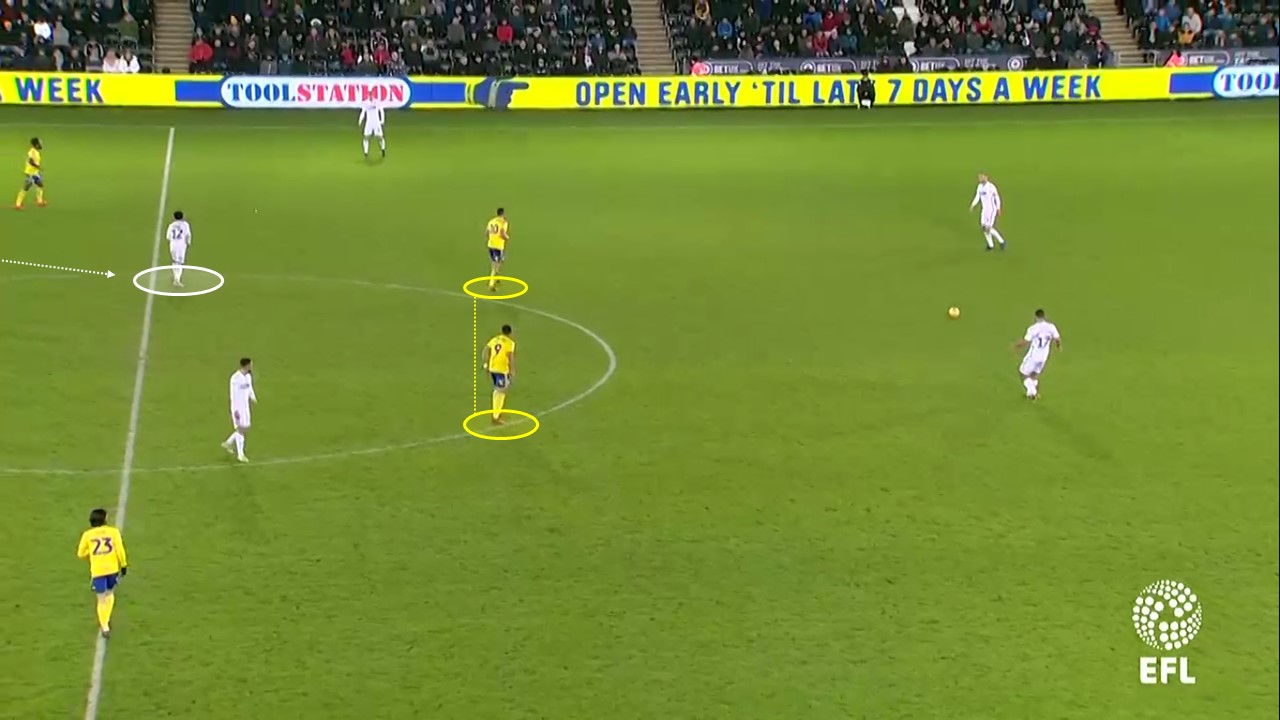 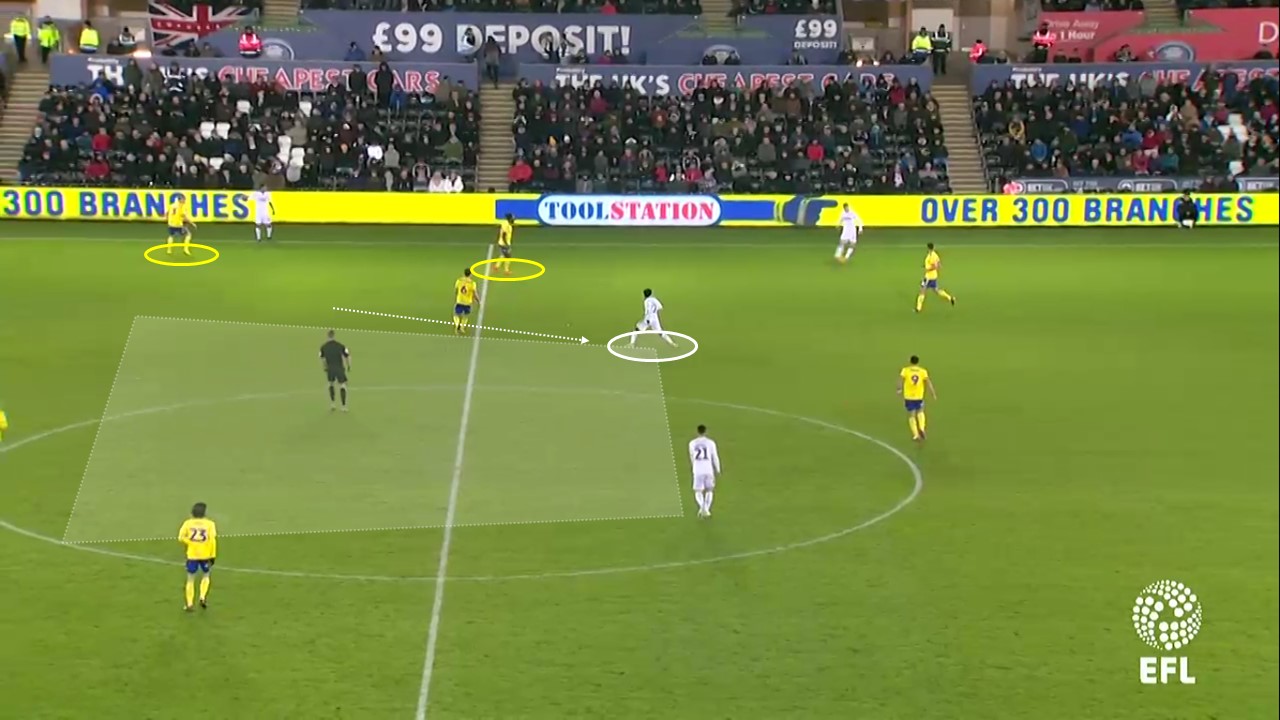 Despite Swansea’s struggles to get forward and Birmingham’s solid defensive and deep block, the home side were able to take the lead midway through the first half. Unsurprisingly, it didn’t come via build-up play from a deep wide right position.

Instead, Matt Grimes wins possession in his own half and makes a quick pass up to Nathan Dyer. The forward move quickly progresses with McBurnie and James linking up through the middle. Dan James runs through on goal and fires past Lee Camp to give the hosts the lead.

Birmingham’s goalkeeper Lee Camp was one of their main sources of getting the ball forward. The other was winning the ball in wide areas and playing quick balls to their front two.

After a dominant start from Swansea, Birmingham were quickly level again 13 minutes later against the run of play. It couldn’t have been a simpler move from the visitors and these long ball situations occurred on at least four or five occasions – of which we’ll demonstrate later in this tactical analysis.

Below shows the ball played long from the goalkeeper and aimed towards their striker. Three Swansea City midfielders are running back and are attracted to the ball, unaware of the goalscorer Maghoma moving forward into the left inside channel behind them. Nathan Dyer doesn’t spot the danger here, failing to drop back and get goal side. 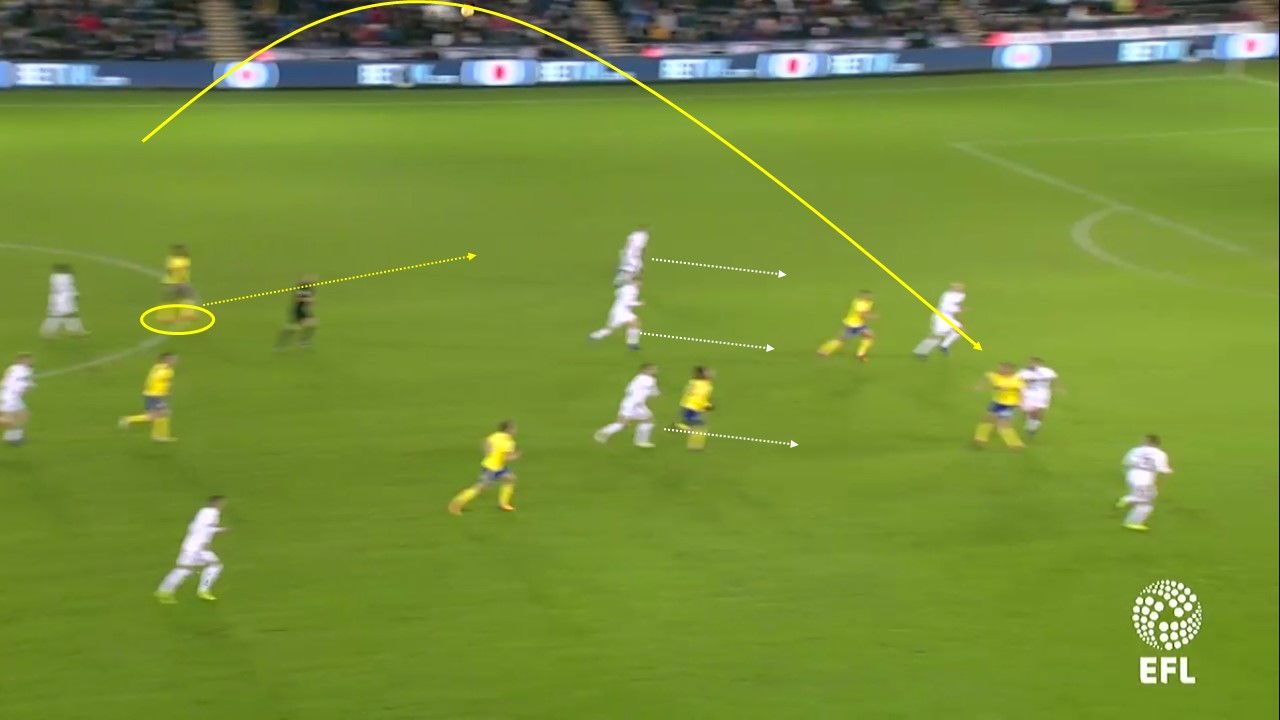 As the Blues win the loose ball from the knockdown, the ball is helped across to Maghoma and played forward into space in front of him. Kyle Naughton (circled) backs off and allows him to finish low past Erwin Mulder into the far corner. 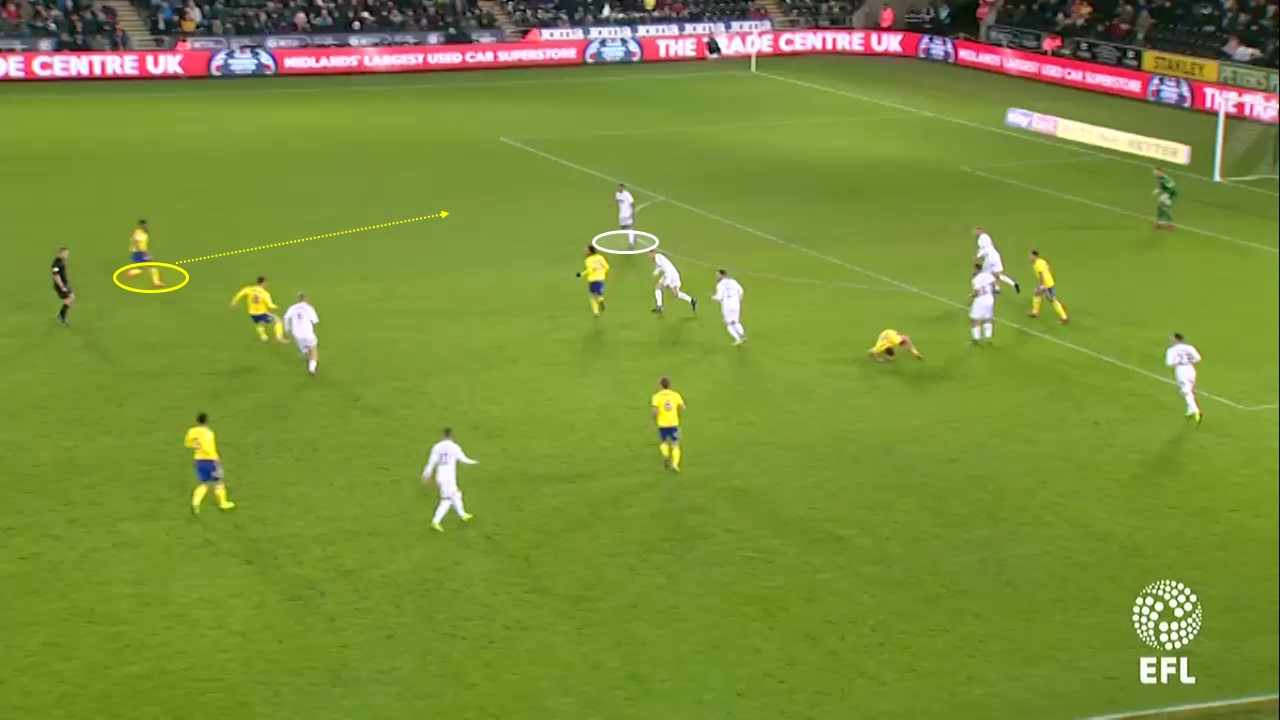 Swansea manager Graham Potter recognised his side’s problems in trying to play down the right and he finally made another tactical switch by moving Dan James from a central attacking role to a wide left one.

As one of their biggest attacking assets, James’ move to the left would help the team to shift their focus down this side. There was still a need though to shift play across and away from these tight and congested areas but Matt Grimes was often marked and unavailable to make use of his long diagonal pass abilities.

Below shows an example of an opportunity for Swansea to quickly recycle the ball across to the right flank. Birmingham City are defensively narrow but their play is far too slow, allowing the opposition time to get back into a solid shape and close the gaps. 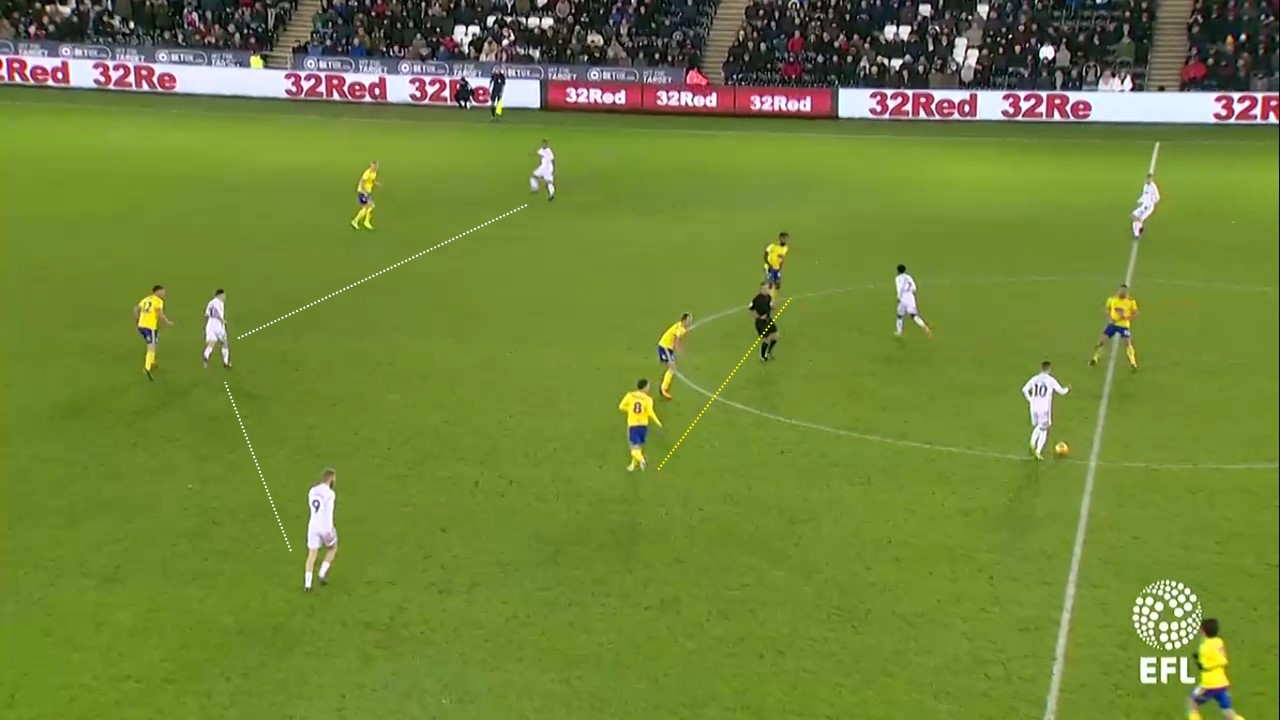 With Dan James now hugging the left touch-line following the sending off of Birmingham’s left back Pedersen, Swansea City finally started to create some openings as McBurnie and Celina linked up with the winger down this near side. 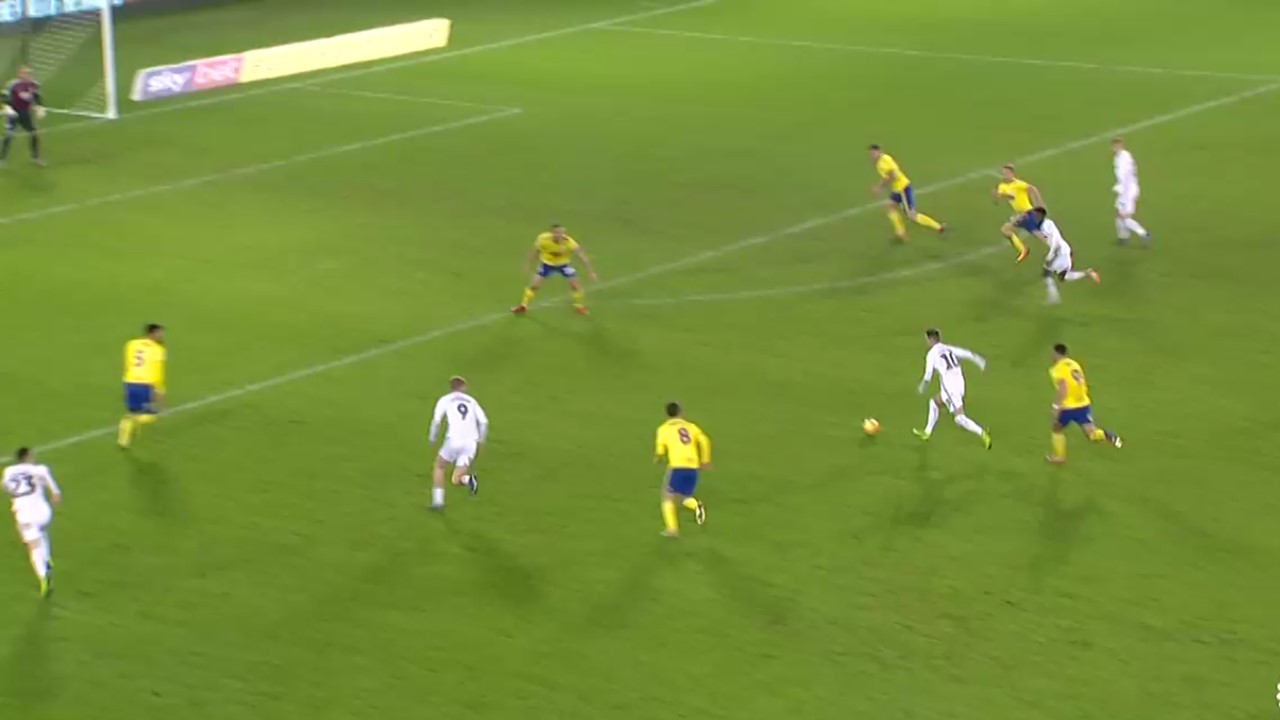 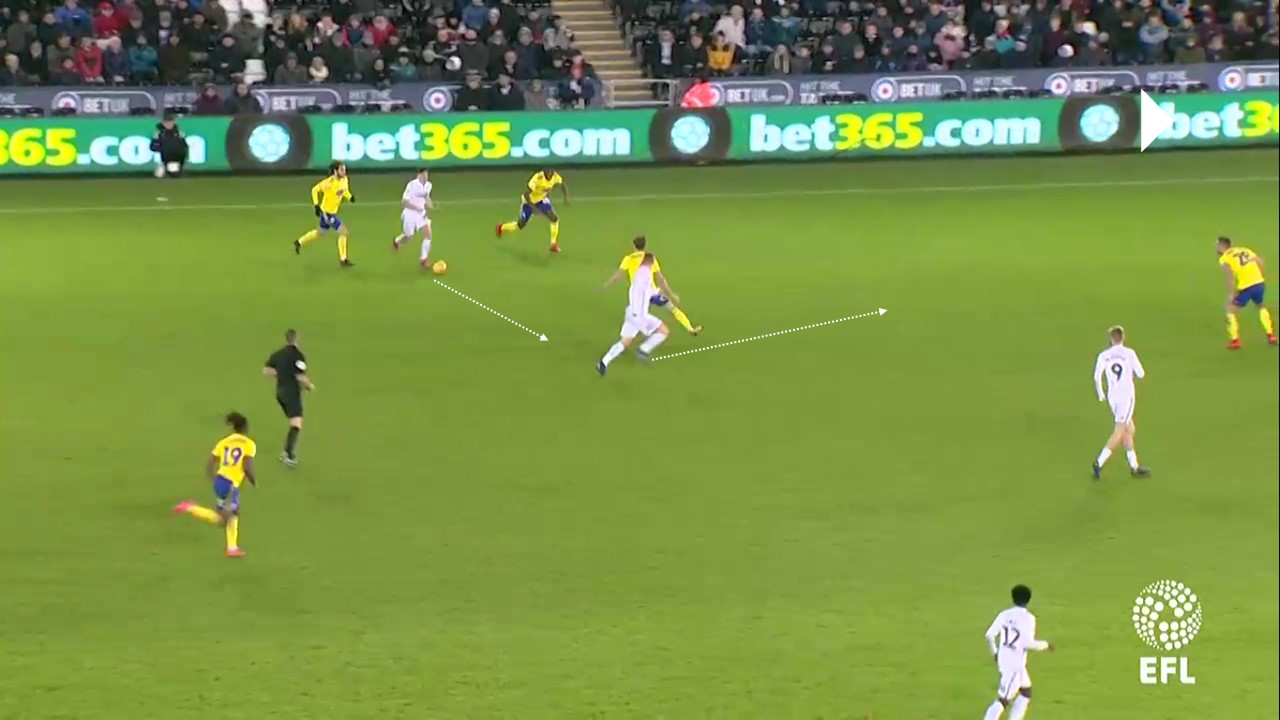 Despite going down to 10 men at the end of the first half, manager Garry Monk was reluctant to drop a striker back to restore a four-man midfield. Instead, he left both strikers upfield, as they would provide a useful out ball option from deep.

Winning balls deep in their own half and playing long on the counter was their preferred style anyway. Swansea City finally began to shift their play from side to side, rather than persisting with playing in tight areas down the right flank.

Swansea City did shift the play from side to side in the second half but it was all too often in non-dangerous areas on the edge of the final third. Birmingham continued to drop very deep across the back making it very difficult to get players in behind. 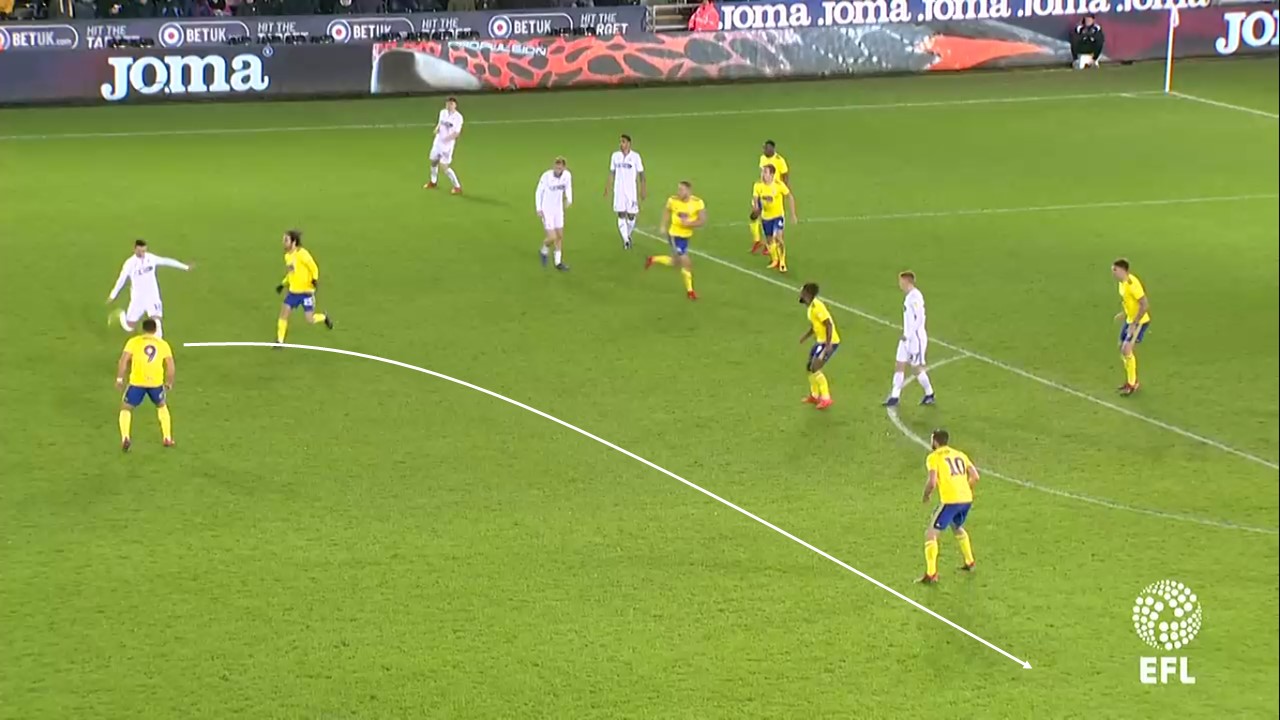 Below, you can see Birmingham’s typical 4-3-2 shape as left-sided midfielder Maghoma moves forward and out of the midfield line to press Connor Roberts in possession. 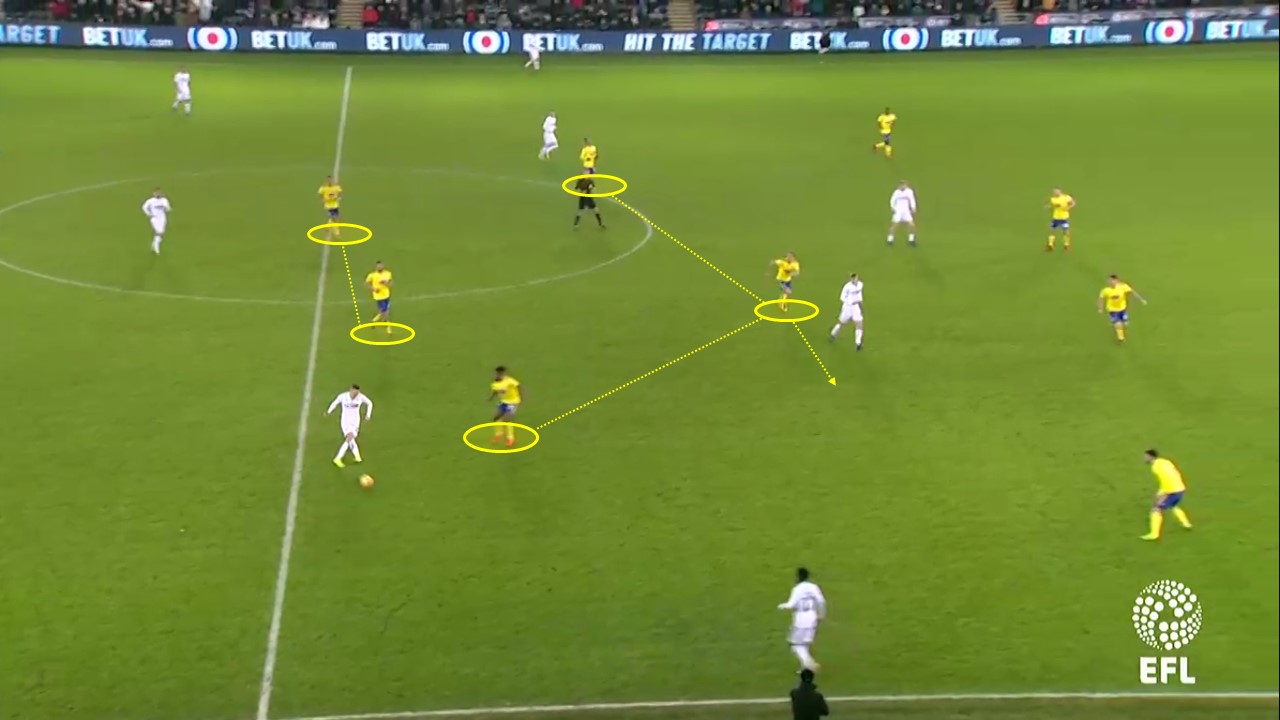 With Swansea still having no joy against Birmingham’s stubborn defensive shape, Potter made another change – bringing on Jefferson Montero and establishing two out-and-out wingers hugging the touchlines.

With Matt Grimes enjoying more time and space in his deep midfield position – as well as others – Swansea could now switch the play and send long balls over to the Ecuadorian winger. 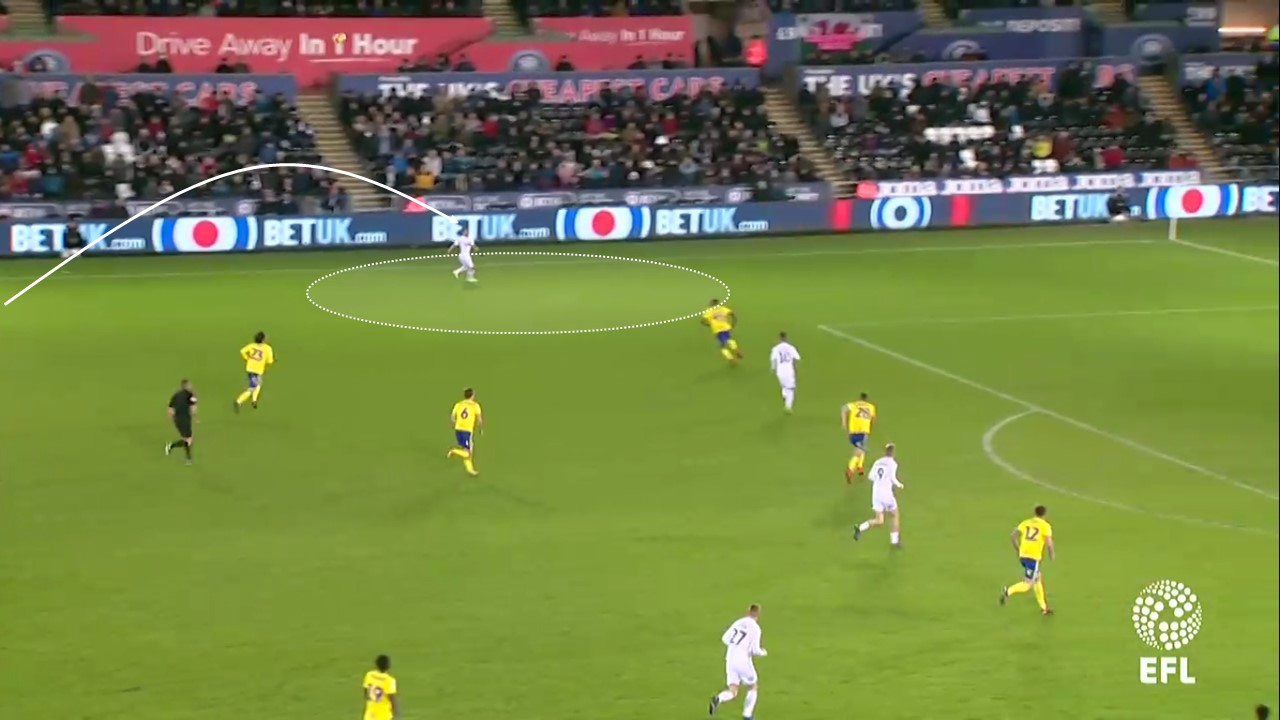 Birmingham City did as good a job as they could to double-mark Montero over on Swansea’s left side. He was still able to cause plenty of problems with his ability to beat a defender from a standing start. 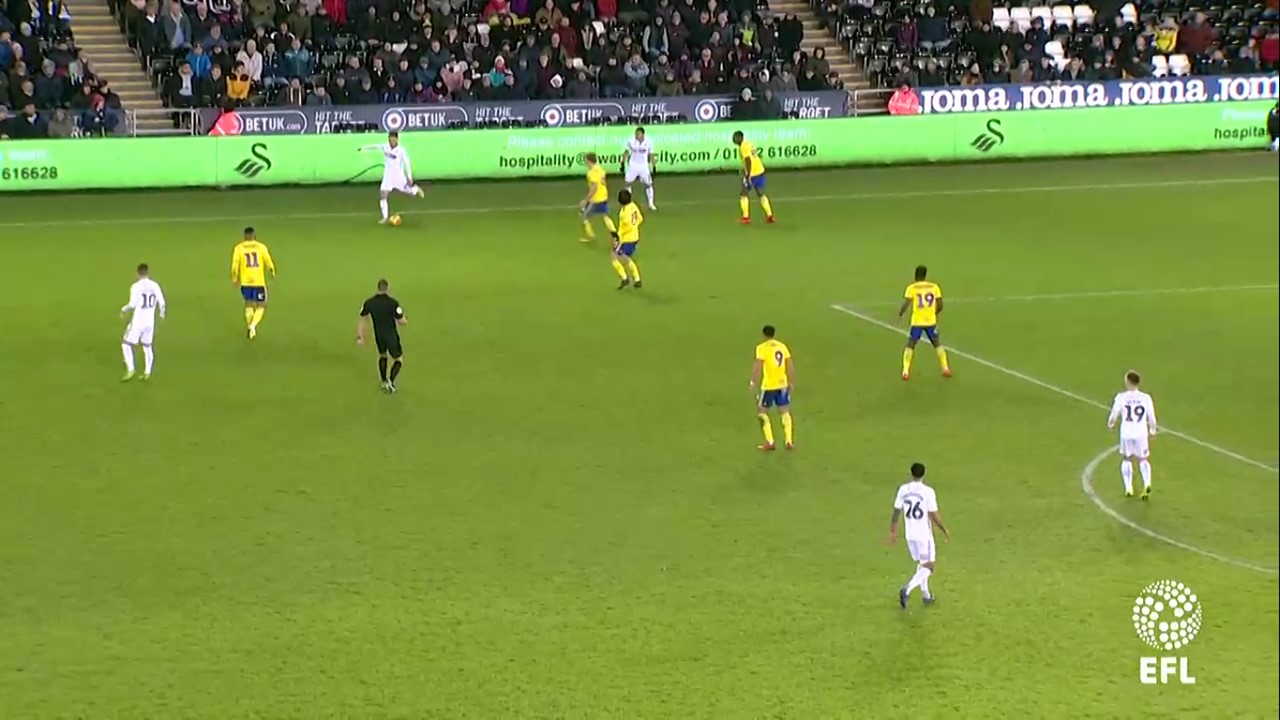 The diagram below shows Swansea City’s dribble attempts (red dots) in the second half and you can see how they all occur down the left side.

In terms of crosses, these were shared evenly between the two wingers with 5 each from Montero and James respectively. The second half crossing locations are shown below via the red dots. 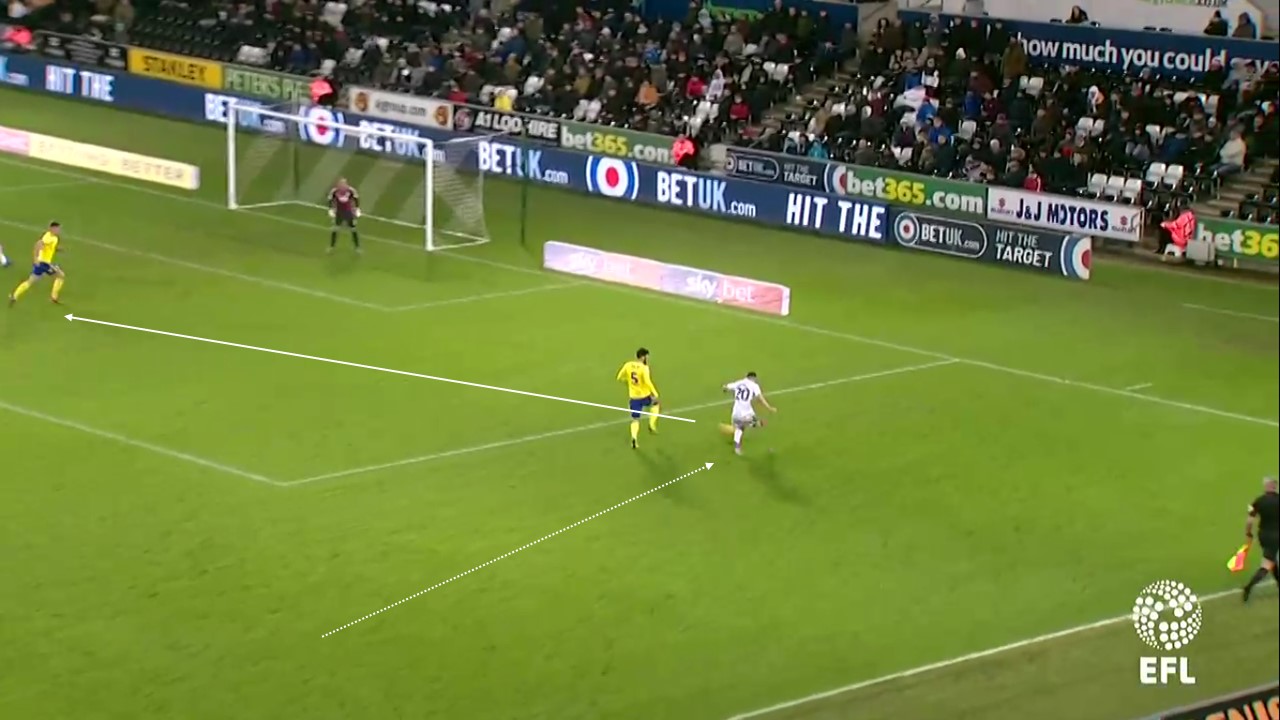 It was Montero’s ability down the left that allowed Swansea City to restore their one-goal advantage after 65 minutes.

Swansea shoot themselves in the foot – twice

Leading 2-1 and continuing to dominate possession, you might have assumed that Graham Potter’s side would go on and take three points to close within three of the play-off positions. But this wasn’t the first time that they’ve let slip such a strong winning position; Ipswich at home is another. Another long ball, this time a free-kick, is sent from the right towards the far post. There’s a mis-match in terms of marking at the far post as the shorter Matt Grimes is beaten in the air.

The ball bounces and as two players run across the front post in an attempt to win it, goalkeeper Erwin Mulder makes a mess of it, flapping at the ball with no success, the ball is in the back of the net and Birmingham are level again. 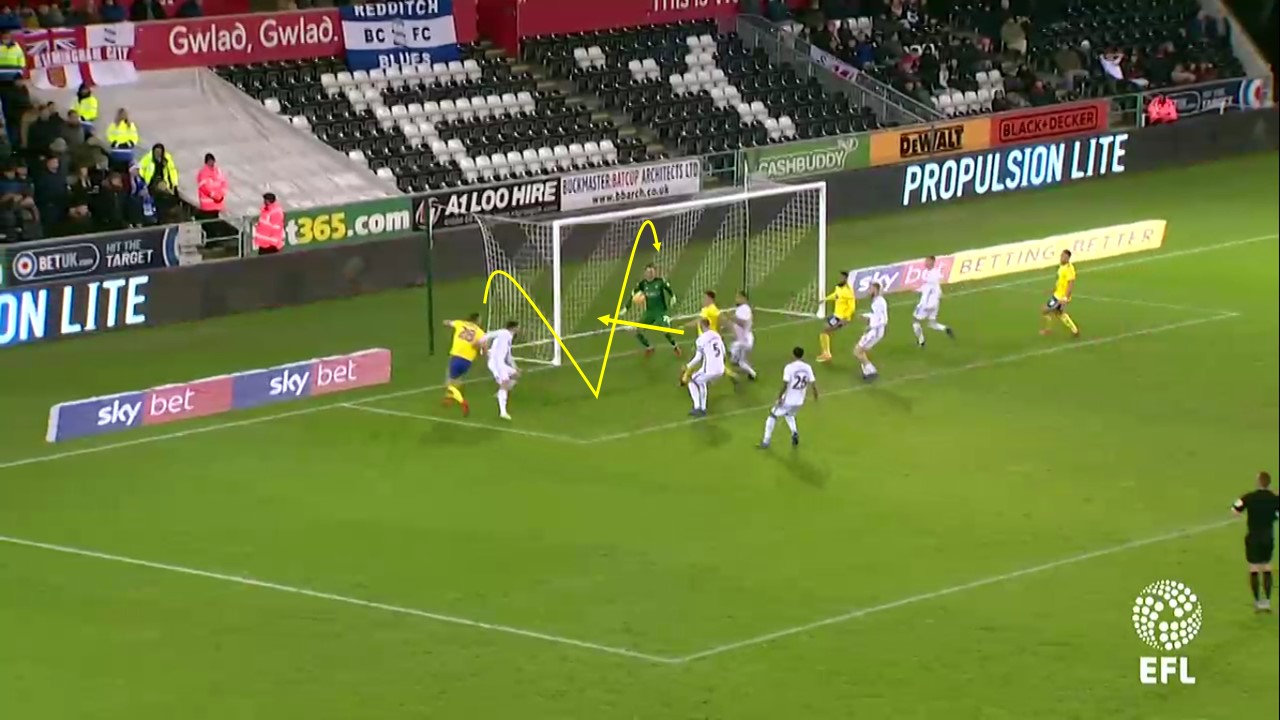 That equaliser was just two minutes after McBurnie had restored Swansea’s lead. Four minutes later and the Blues are in front: 3-2. You could probably guess by now how Birmingham City created their third goal.

Below shows another example of Swansea’s poor shape defending a long ball from the goalkeeper. The knockdown is lost, Swansea are too narrow and Maghoma again finds himself in space in the channel to receive the ball. 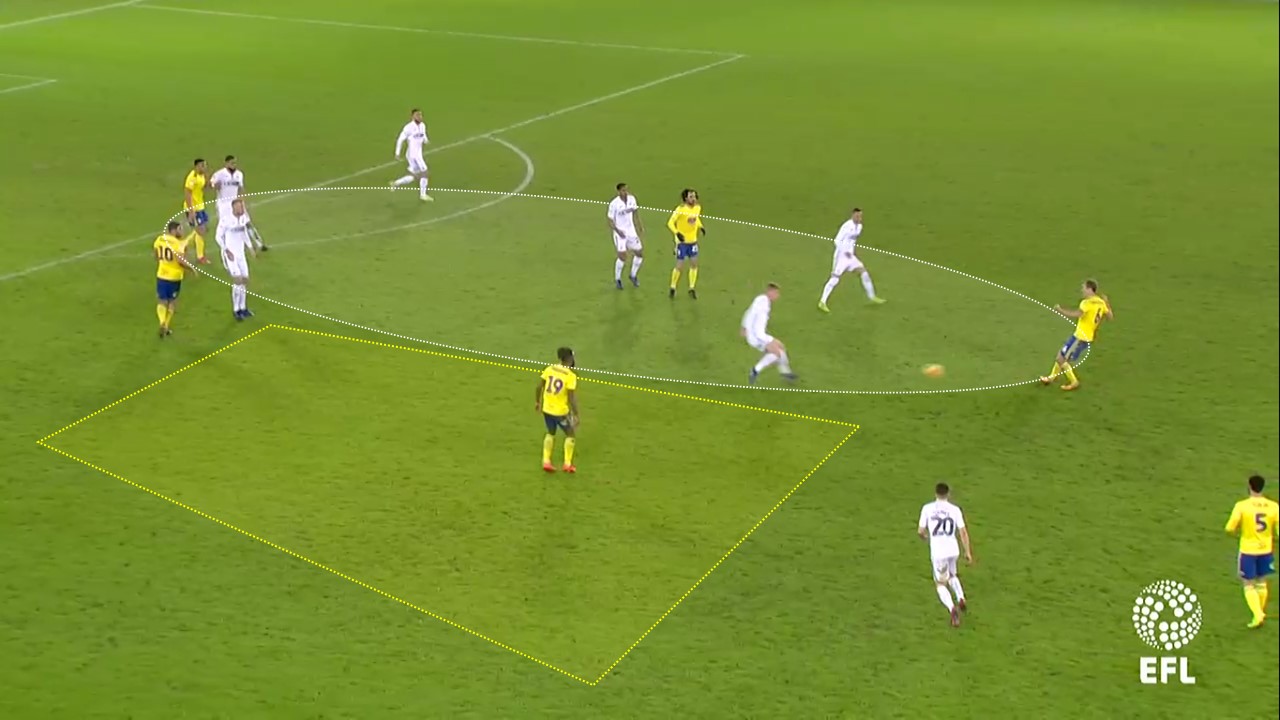 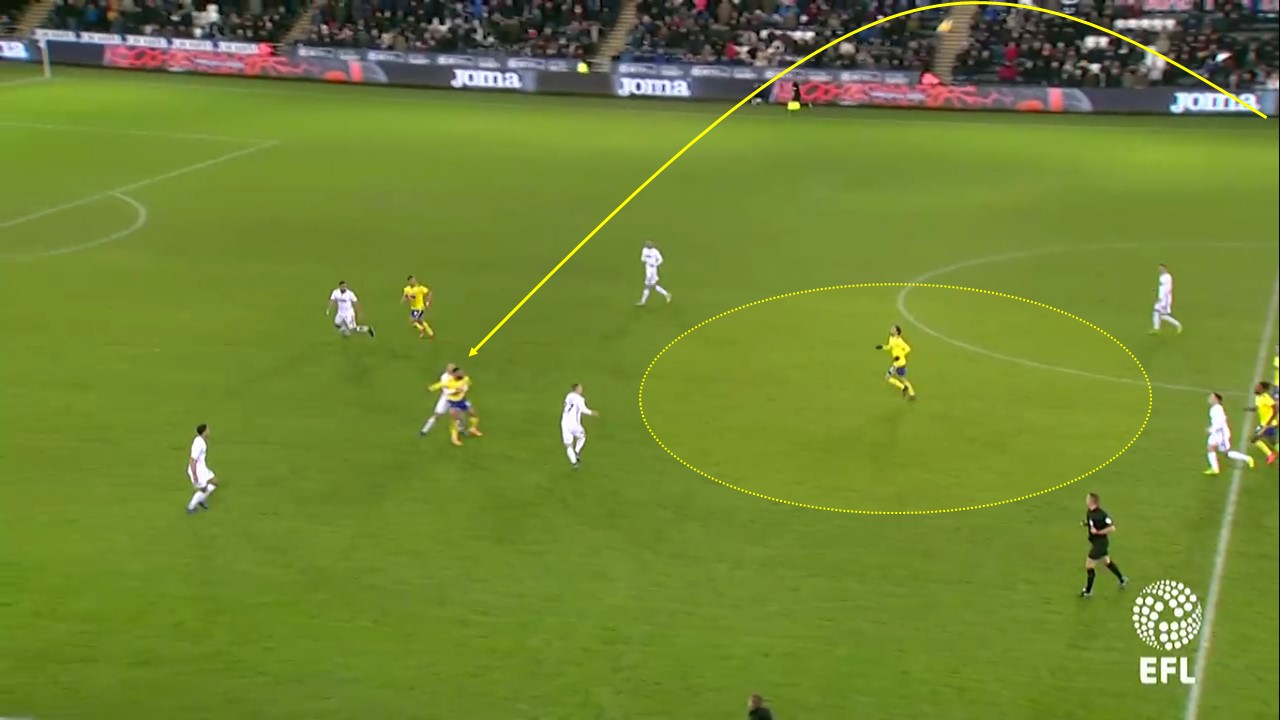 Yet again, Birmingham aim a long ball from the goalkeeper. The aerial challenge is initially won by Swansea midfielder Jay Fulton but Bersant Celina is soon dispossessed just inside the opposition’s half and Birmingham have two players well positioned to attack into the space in front of them. 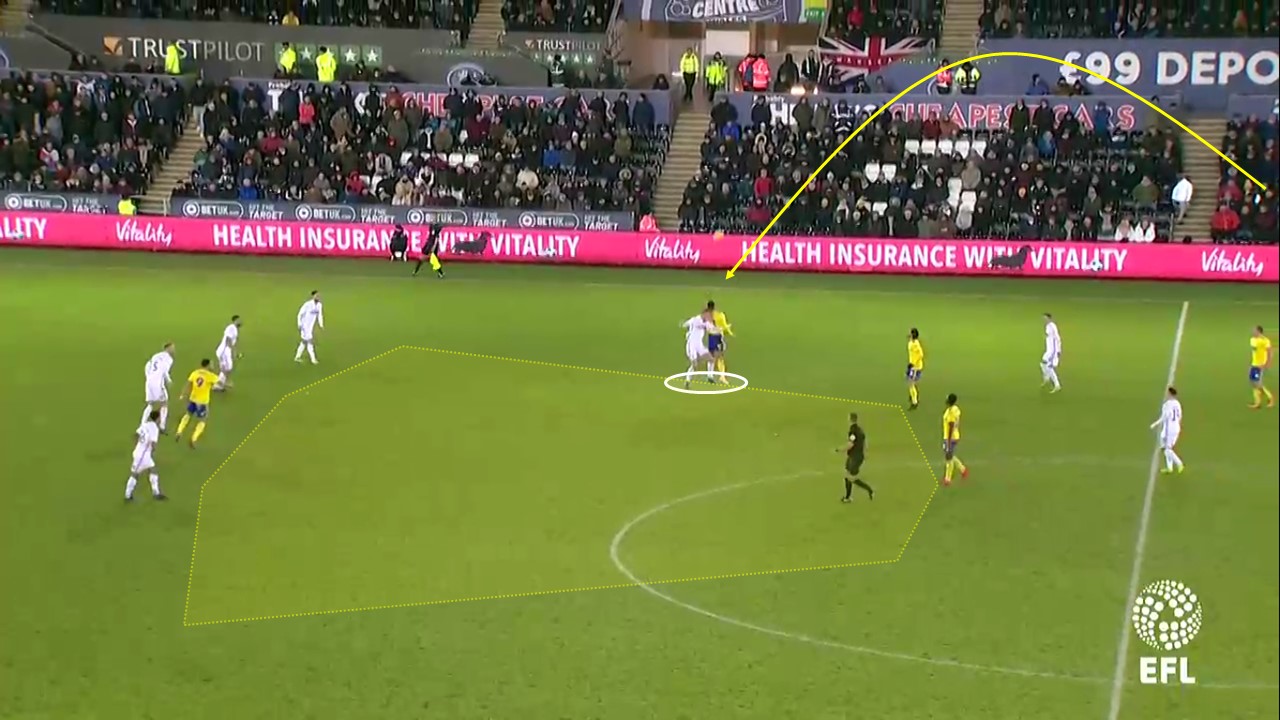 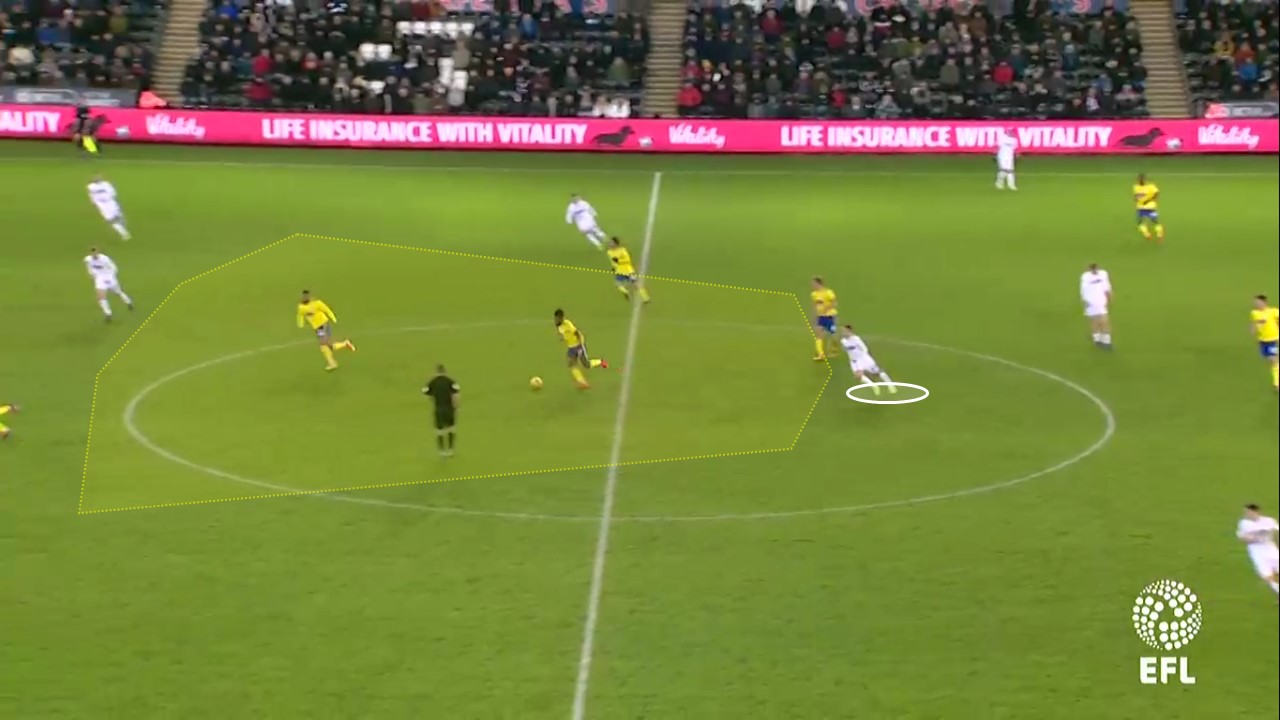 Similar to their first goal, Kyle Naughton backs off the on-coming attacker. This time Che Adams curls in an unstoppable shot as Birmingham lead 3-2 with 19 minutes of normal time remaining. 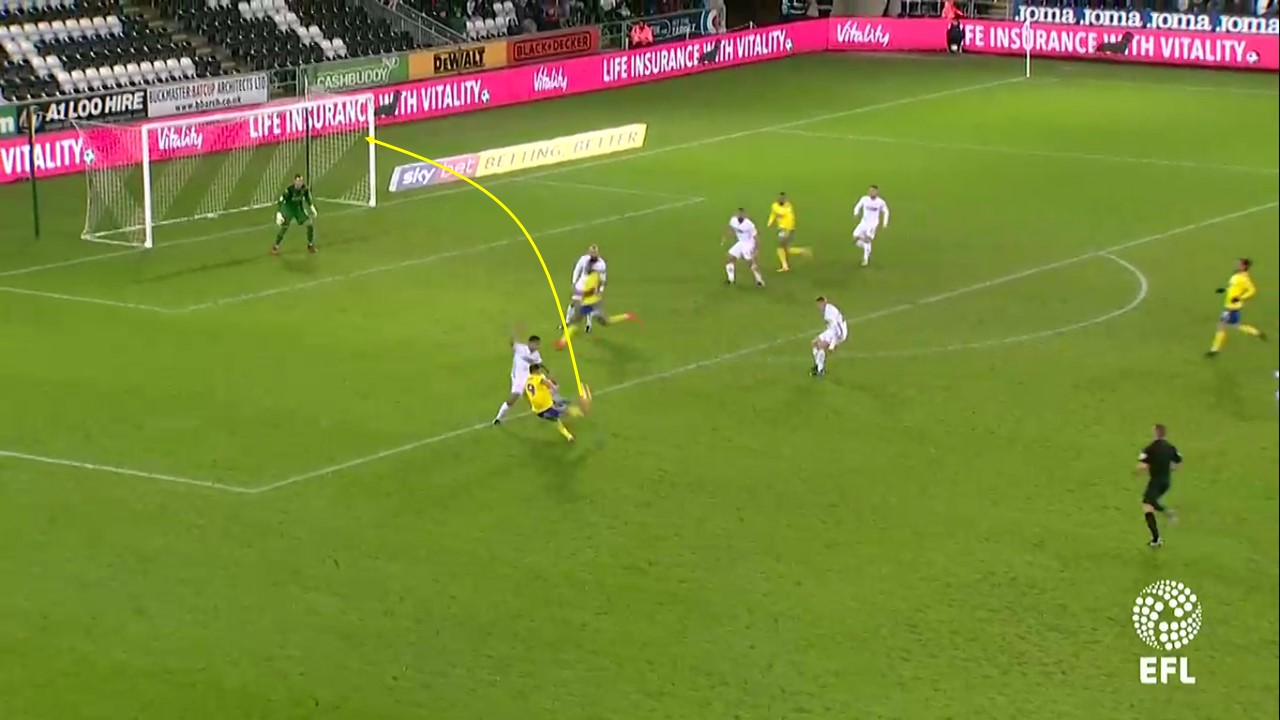 The introduction of Jefferson Montero proved to be a key substitution after 56 minutes for the home side. At the same time, Potter made yet another tactical switch by moving deep-lying midfielder Matt Grimes to left back and moving Kyle Naughton into midfield. The logic here was likely to get a better balance in the side with a natural left-footer able to feed passes to Montero.

However, Swansea did suffer a little without Grimes in the centre and his ability to switch the play via long diagonal passes. In an attempt to compensate for that, the centre-backs Van der Hoorn and Carter-Vickers both pushed forward into Birmingham’s half to offer this option when required. 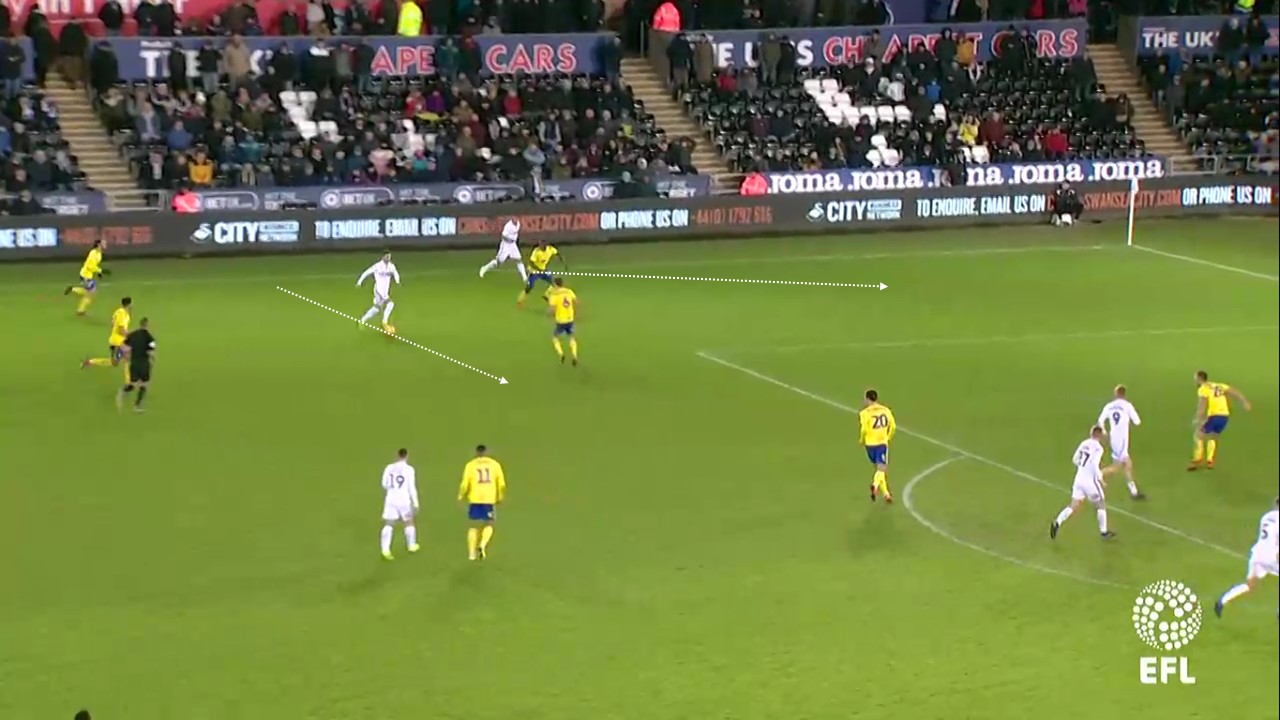 Bersant Celina, who had a relatively quiet game by his standards, was more involved in the second half after barely seeing any action in the first given his side’s persistence down the right flank.

In the build-up to the late equaliser, as shown above, he makes a useful run inside before feeding Montero towards the by-line. He sends in another cross, this time a higher one towards the far post that defender Mike van der Hoorn heads back across for McBurnie to finish from close range. 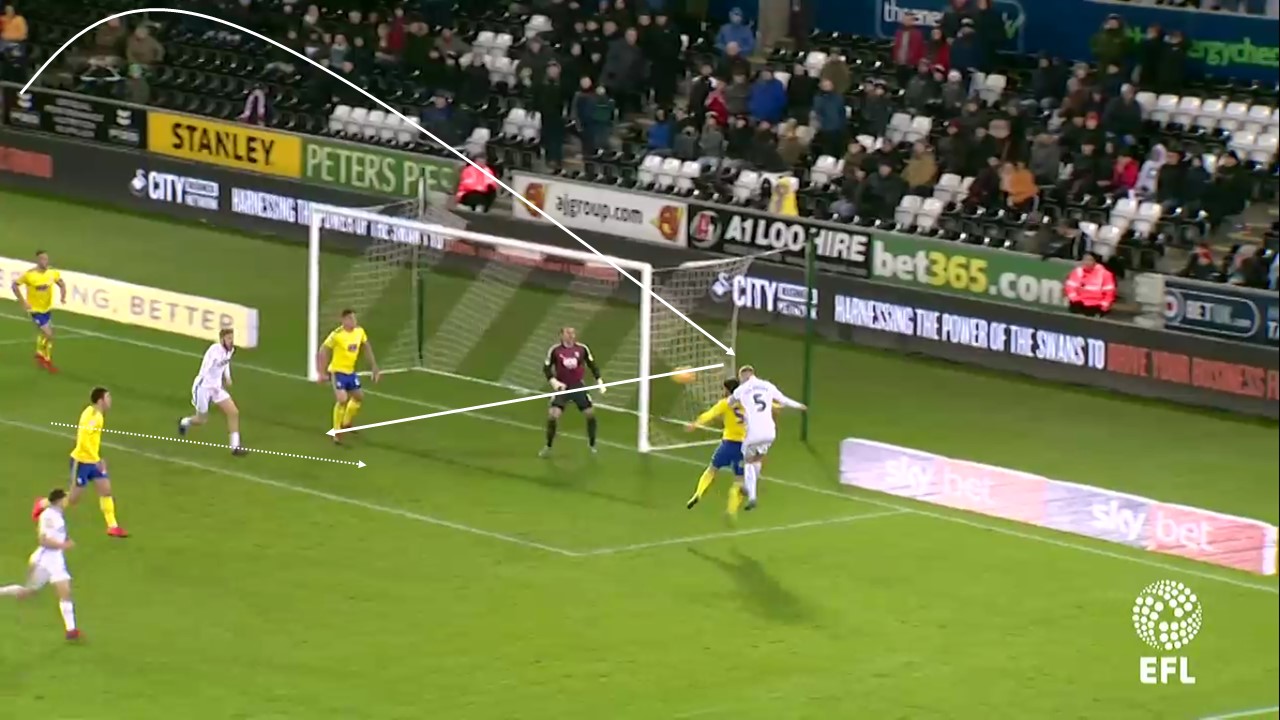 This was another missed opportunity for Swansea City in their race for a play-off place. They’ve dropped points from winning positions too often this season which is why they can’t compete amongst the top six.

Birmingham City will be disappointed not to have seen the game out and get the win. They did well with 10 men, especially considering Swansea City had both Montero and Dan James on either flank. They restricted Swansea throughout the first half and caused them problems with their long-ball direct approach.