It’s only been a week since Maurizio Sarri made a grand addition in Chelsea’s squad in the form of Gonzalo Higuain with the aim of enhancing Chelsea‘s attacking strength. However, his boys still faced an embarrassing 4-0 defeat which slipped them out of the Champions League qualification spots where they’ve been for a while.

The defeat is not in any way attributable to the Argentine international who just made his debut and still needs time to set himself up in Sarri’s Chelsea. It was rather both the laxity of Chelsea’s defence and the gap in Chelsea‘s playmaking squad which was all behind the latest loss.

Throughout the 90 minutes, Chelsea couldn’t create any significant chance except Kovacic’s headed shot which hit the crossbar out of the Croatian’s hard luck. This tactical analysis explains how Chelsea were stung by their flawed tactical schemes in both attacking and defensive phases and how Bournemouth’s pressing scheme worked wonders.

Chelsea played with their usual 4-3-3 set up featuring debutant Gonzalo Higuain leading the front line. Meanwhile, Bournemouth started with a 4-2-3-1 line-up but mostly played with a more defensive 4-4-1-1 or 4-4-2 formation since they were not the ones dominating the possession. 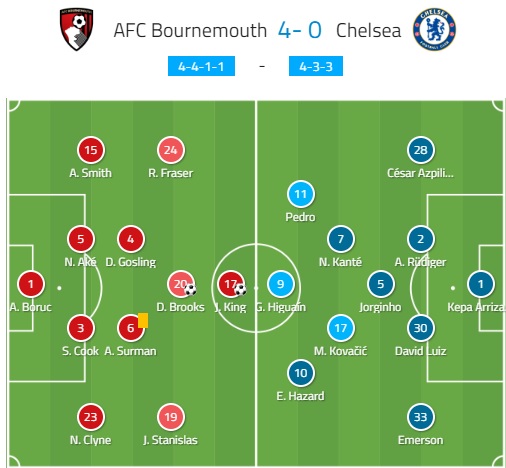 The home team employed a ball-oriented press against their visitors. Near the halfway line, the Cherries were even more aggressive gegenpressing Chelsea, while they formed a flat low-block defence as the Blues approached the final third of the pitch.

In the image below, Bournemouth players were instigating their ball-oriented press as Chelsea reached their half with the ball.

In the image below, Bournemouth’s defence has completely assumed a 4-4-2 defensive shape after they encountered Eden Hazard in position to create an attack in a dangerous area.

Such a defensive tactical plan caused Chelsea to face as many as 52 interceptions by Bournemouth, more than the average of 48 interceptions Chelsea have faced this season so far.

Due to Bournemouth’s defensive strategy of implementing a ball-oriented press turning to a low-block, the Blues were hardly able to create any significant chances.

To escape from Bournemouth’s pressing scheme and make their way towards the attacking third, Chelsea relied either on long balls or counter-attacks.

However, the problem here was that the origin of Chelsea’s long balls or counter-attacks remained in their defensive half. Since Bournemouth were executing a ball-oriented multi-marking scheme as they approached Chelsea’s half and forming a low-block defence as they approached their defensive third, Chelsea’s strategy of playing long from their own half would never turn out to be effective.

This is because balls played long into Bournemouth’s half would eventually get caught up in the home team’s low block defence. Even the short, Sarri-style passing did not do the trick either in Chelsea’s final third, due to the home team’s flat defence.

In the image below, as Hazard receives a long pass from Jorginho (out of frame), Chelsea’s attack would soon get nullified because Bournemouth’s backline was already all set to shape up without the ball.

Chelsea dominated possession with their long passing game from the defensive half and short passing game in the opposition half, but they couldn’t create anything from it. Besides, a massive proportion of their possession was comprised of lateral passes which Chelsea desperately had to play to escape the pressing game.

Sarri’s men played 306 lateral passes in total, which was much higher than their season average of 238 lateral passes. The only way Chelsea could have made their way out of Bournemouth’s gegenpressing scheme would have been to play long balls from the middle of the park instead of playing it back from their defensive half. In the middle region, Chelsea could have distracted Bournemouth’s players, as the latter would gegenpress in a multi-marking fashion.

This would have made spaces for Chelsea to play long attacks into the more advanced regions now left unoccupied by Bournemouth. It would also have given an opportunity to Chelsea to provide enough room for their attack by the time the ball landed into the final third.

However, Chelsea had no one in the middle to play long balls or long through-passes accurate enough to create anything significant in the way David Luiz does. Jorginho could have some made contribution in this respect, but he remained mostly stuck in the defensive half during initial phases of build-up. This is not the first time that the crucial issue of lacking long-passing talent in Chelsea’s midfield has brought about an embarrassing loss.

Now that Chelsea were almost incapable of creating any game-changing opportunities, they eventually became more vulnerable to conceding them. In the second half Sarri made more use of his full-backs. Chelsea’s backline also pushed up from their comfort zone. Azpilicueta too came into advanced areas during attacking phases. However, that’s where it started getting even riskier.

In the build-up to the first goal conceded by Chelsea, as Azpilicueta was caught upfield in Bournemouth’s area, the hosts countered through the open space left by the Spaniard’s marauding run. To make up for this, other Chelsea players were forced to occupy and press along the right wing which left the more dangerous central areas open to attack for the home team.

This gave Brooks the chance to receive a lofted pass from his teammate, as shown in the following image. He found enough space and time to play an assist towards King, right in the centre, from which the striker scored the first goal of the game.

This was not the only instance when Chelsea’s backline failed to pay attention to Bournemouth’s attacking threat due to being out of position. All the four goals Chelsea conceded came as a result of this inattentiveness.

In the build-up leading to Bournemouth’s second goal, Azpilicueta had again pushed up  away from his position during the counter-attack and so had some of his teammates. Then there was no coordination among the remaining players on how to play the passing game.

Out of this confusion, Luiz’s pass to Jorginho was intercepted as shown in the image below. As Chelsea’s backline, including Luiz, had been drawn out of a safe area already, the situation precipitated the second goal.

The third goal was conceded when Chelsea’s midfield line was not positioned to defend the opposing counter-attack. As shown in the picture below Bournemouth had enough space to pass into the empty space. With Chelsea’s defence again out of position already, the home team comfortably converted the ensuing chance out of the visitors’ usual negligent attitude.

Chelsea conceded the final goal in stoppage time. As Bournemouth earned an indirect free kick, Stanislas was substituted off for Chris Mepham. The free kick was played just following the tactical substitution, which was enough to distract the already inattentive Chelsea’s defence and allow Daniels to head home with relative ease.

In short, it seemed there were 11 players couldn’t get their heads on straight while the others used every possible chance they could. Chelsea demonstrated flaw after flaw that Bournemouth simply picked apart. 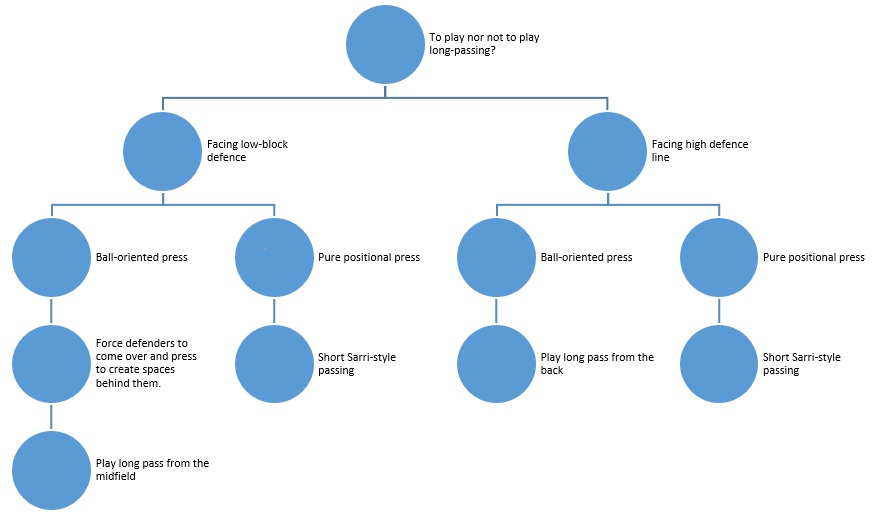 The Blues lacked the capacity to play long through-balls or high passes from midfield, which caused them to push their defensive line forward. This only ended up throwing away their defensive cover due to their lack of positioning. It’s time for Chelsea and Sarri to consider the necessity of another playmaker in the midfield, particularly who could create attacking opportunities to bypass opposition midfield lines by using long passes.