Nuno Espirito Santo’s Wolves travel to Merseyside to face Marco Silva’s Everton in what promises to be a fascinating encounter. Wolves and Everton find themselves in a mini-league, if you will, which includes both of them, Watford, Bournemouth, Leicester and West Ham. The prize for winning this mini-league is a seventh-placed finish and the reward of Europa League football (providing one of the top six win the FA Cup).

The reasoning behind the emphasis on prize is twofold. Firstly, the Europa League gets a lot of disrespect from certain quarters. When teams like Burnley fail to take it seriously, it’s hardly surprising. All the same, if you’re not aiming for the Europa League and you’re not in the top six, what’s the point? Secondly, it’s rather well documented that the Premier League is swimming in money. The higher you finish, the more money you earn – simple.

This is Wolves’ third game in a row against teams from the aforementioned mini-league. The two previous games, against Leicester and most recently West Ham, have yielded six points and seven goals.

Everton’s last two league games have resulted in one win and a loss. After losing to a resurgent Southampton prior to the FA Cup tie against Millwall, they beat Huddersfield 1-0. Perhaps it wasn’t that impressive on paper, but they did have 10 men for the last 25 minutes after Lucas Digne was shown a straight red card.

Everton are the definition of inconsistent this season. Nothing screams that out more than losing 6-2 at home to Spurs before following it up with a 5-1 win at Turf Moor against Burnley. It’s not either of those games that we shall be looking at, though. We will be placing the spotlight on Everton’s New Year’s Day loss at home to Leicester in this Premier League preview.

Certain elements are going to be more important than others. So, instead of beating around the bush, the focus will be on the goal that Leicester scored, Everton’s shape, where they attempted to score from and the patterns of the game. Starting with the most logical place first, we look at Everton’s shape.

In this game against Leicester, it could be argued that Silva’s side were playing either 4-2-3-1 or 4-3-3. Michael Keane (#4) and Kurt Zouma (#5) form the central defensive partnership. Digne (#12) provides more width on the left than Jonjoe Kenny (#43) does on the right, although that’s not too much of a problem as Seamus Coleman has now returned to the starting lineup and will almost definitely start at right-back.

Left-back is somewhat of a problem position for Everton as Digne is suspended and Baines is thought to be missing after coming off injured against Huddersfield in the week. Brendan Galloway would be one of the players that Silva could look at, but he’s not yet at full fitness. Alternatively, Jonjoe Kenny could be asked to play on the left. With this looking the most likely option, Matt Doherty will be chomping at the bit.

As you can see from above, Kenny tends to be slightly more conservative when it comes to going forward. Doherty has been in fine form going forward this season however, and you’d think would still pose Kenny several problems.

Aside from the defensive issues, Idrissa Gueye (#17) was heavily linked with PSG in January but he has remained on Merseyside for now. If he is fit enough to play, he will sit in front of the back two and dictate play from there.

It will probably be Andre Gomes (#8), Gylfi Sigurdsson (#10) and one more who start in midfield for the Toffees. If Gueye is fit, it’ll be him. If not, Tom Davies, who started against Huddersfield, will be in line for another starting berth. Those three against Ruben Neves, Leander Dendoncker and Joao Moutinho will be a fascinating battle. Dendoncker, who doesn’t get nearly enough credit, acts as Moutinho’s and Neves’ chaperone and allows both of them to play the game they’re so good at doing.

From the above image, it is evident that Richarlison (#30) and Theo Walcott (#11) provide width rather than acting as inside forwards. Something that Wolves’ back three should be wary of, especially with Nuno’s tactical outlook set up to bomb the wing-backs forward, is getting pulled to one side and midfield runners occupying the space vacated.

This is very much how I envisage the momentum playing out tomorrow. Wolves, much like Leicester, will be more than happy to relinquish possession of the ball to the hosts. Nuno’s side operate much better on the counter-attack and do really struggle in games where they face teams who sit deep such as Watford, Brighton, Huddersfield. Considering Wolves’ tendency to concede goals from set pieces, Everton’s best chance of scoring could well be from a corner or a dangerous free kick.

Everton had more than enough chances against Claude Puel’s side. However, their highest chance on the xG scale was 0.13 which give us two facts. Firstly, Leicester defended admirably. Secondly, despite their volume of chance Everton didn’t create anything clear cut.

Looking at it from Wolves’ defensive point of view, there were 14 attempts inside the penalty area for Everton. From that 14, five of them came from set pieces. As we highlighted earlier, Wolves have conceded many of their goals from set pieces. If Silva’s side can replicate the number of attempts against the Black Country side, there’s a high possibility that at least one will find its way past Rui Patricio.

Leicester’s efforts were few and far between but clearly the biggest chance of the game was Leicester’s goal (0.33 xG). That all came about from a lack of concentration from Kurt Zouma, as you can see below.

Zouma gifts half a yard 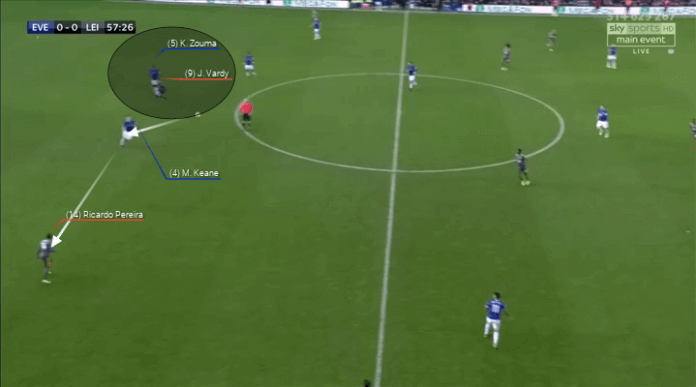 As easy as one… 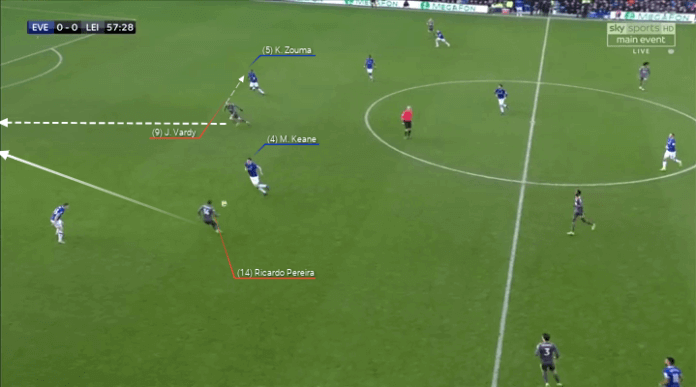 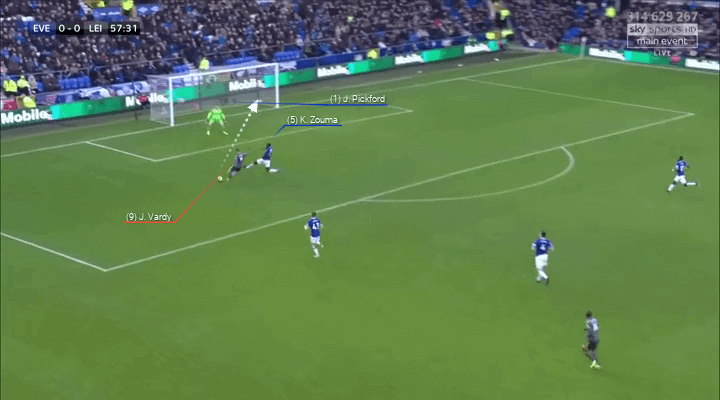 Neither Zouma nor Keane cover themselves in glory with this goal. When you throw Diogo Jota and Raul Jimenez’s red hot form into the mixer, Zouma and Keane’s lack of cohesion could prove problematic for The Toffees.

West Ham really struggled against Wolves’ shape and they also played with four at the back, so it all depends on how Marco Silva views the game: play to win or play not to lose? It will be a dangerous game, especially if you play the wrong hand at the wrong time. An intriguing matchup awaits.

Both sides will want to win this game to send a message to the others in the mini-league. When they met on the opening day of the season at Molineux, it finished 2-2. Nevertheless, both sides have come a long way since then and if anyone manages to predict the right score, they’re a better person than I am. For the record, I’m going Everton 1-3 Wolves.