Borussia Dortmund took on Borussia Monchengladbach at home last week Friday(21/12) on Bundesliga matchday 17. It was a highly anticipated match as Monchengladbach were hot on form, and came into this game ahead of Bayern Munich in 2nd place. Dortmund, of course, led the league before this game and were out to ensure that they maintained a healthy lead ahead of the winter break.

The game ended 2-1 in favour of Dortmund thanks to goals from Jadon Sancho and Marco Reus. Although Dortmund took the lead in the first half, Christoph Kramer gave Monchengladbach an equalizer before half-time.

To understand the tactical context of this match, it’s important to understand how both teams’ pressing styles had an effect on the game. Both teams used midfield pressing, in contrasting ways with contrasting results.

Gladbach, allowed Dortmund to retain the majority of possession, by opting to set up a midfield block rather than pressure the centre-backs on the ball. They went for a position-oriented style, choosing to defend deep midfield zones and maintain a compact shape. The aim was to prevent Dortmund from penetrating areas in-between their midfield and defensive lines.

Using a 4-5-1 out of possession, they had good coverage in the centre of the field, which meant that Dortmund were usually be outnumbered ahead of the ball. Kramer played as the lone-pivot, tracking any player (usually Reus) who was positioned in attacking midfield zones. With Axel Witsel and Thomas Delaney playing as Dortmund’s double-pivot, their positioning was naturally conservative and both rarely ventured in-behind Gladbach’s midfield line. So in the opening exchanges of the game, Gladbach’s midfielders found it very easy to keep play in front of them as the team maintained compaction and there was only Marco Reus(and Alcacer at times) to deal with inside their defensive block.

Dortmund’s passing and movement in the early stages was ineffective for penetrating Gladbach’s block and creating space closer to goal to create goal-scoring opportunities. Usually, they focus their attacking towards the half-spaces inside the final 3rd. This was particularly challenging against Gladbach because of how their midfield 5 were spaced out and each player was responsible for a vertical channel. So Dortmund had to be patient and take an indirect approach to penetrating Gladbach’s block. They focused on circulating the ball into wide areas, with the aim of pulling Gladbach’s midfielders towards the ball and creating 2v2, 2v1, 2v2 situations on the far side.

As mentioned before, in the early stages of the game they struggled to do so and possession was more balanced but because of Gladbach’s ineffective use of the ball, Dortmund controlled possession for longer periods. This allowed them to perform a few penetrations down the wings, but they still failed to create goal-scoring opportunities consistently when they did get inside the final 3rd. The problem with their approach was that it was predictable and Gladbach more often than not would be able to shift and cover space around the ball and maintain balance on the far side. Only one real chance was created in possession, but that was when Gladbach were disorganized whilst pushing up after a corner was cleared. Hakimi managed to play a laser pass from inside Dortmund’s half, into Guerreiro in the final 3rd. After Guerreiro played a pass to Reus who made an underlapping run, Reus crossed to Alcacer who shot poorly and Dortmund failed to convert a really promising opportunity.

Dortmund’s midfield pressing gave Gladbach the time and space to retain the ball in deep areas without high pressure. They focused their attacks on the wide areas particularly getting the ball into Hazard and Hermann to link up with their midfielders and get crosses into the box. Their attacks started at the back where they would circulate the ball along the backline and progress towards the halfway line. Gladbach looked to create 1v1’s or ideally 2v1’s for their wingers and that’s why the two 8’s were mostly uninvolved during the build-up. Once they managed to create 1v1 or 2v1 situations, they would launch long passes into the forwards. What was striking about their play in possession was the fact that their midfielders were basically uninvolved in the build-up. Kramer was marked by Reus and Alcacer as one tracked him while the other blocked the passing lane into the centre. Zakaria and Neuhaus would stay high up the field, closer to Plea, at centre-forward, and near the wingers, Hazard and Hermann. Plus, Sancho and Guerreiro were positioned very narrowly, in the half-space, which further discouraged any passes down the centre and the midfielders dropping deep to support

Gladbach created only 1 shot in the first half using this approach and their attacking failure was a result of not being able to manipulate Dortmund’s shape to create the conditions they sought out wide. Firstly, the centre-backs were reluctant to dribble forwards when they had space ahead of them. With the 8’s and wingers already occupying advanced zones, carrying the ball forwards would’ve congested play, while risking open space in the backline. It would’ve made pressing much easier for Dortmund as they wouldn’t have had to cover much space. The one time, Bayer did dribble forwards, it resulted in a lightning-quick counter-attack by Dortmund finished off by Sancho for the opener.

Contrastingly, Kramer’s equalizer came at the end of a move in which Gladbach opened up Dortmund through clever positional play and composure in isolated situations. It all started when Dortmund failed to drop into shape early enough after an attempted press with little pressure. Zakaria dropped deep to support Fabian Johnson on the ball and his movement attracted Guerreiro, which meant that when Zakaria made a pass to Hermann, the wingers received it in isolation with Hakimi. Hermann’s move infield dragged two players with him(while Zakaria made a forward run) before he found Hazard who dropped off from the backline before playing a one-touch pass in-behind to Zakaria. Zakaria crossed from wide into the box and Kramer converted to make the score 1-1.

They were really careful not to leave the backline exposed but the truth is the real problem lay with the positioning of both of their 8’s, who basically acted as wide no.10’s. This made them unprepared to stop counter-attacks because of the amount of open space on either side of Kramer. In the 2nd half, they conceded a second again at the end of a counter-attack. They did a great job of nullifying the threat of Jadon Sancho in the first half but as soon as Dortmund regained possession Sancho showed his quality while Gladbach were still recovering.  He managed to combine brilliantly with Reus before the ball got to Gotze. Gotze made a brilliant low cross for Reus to convert and score the winner.

The rest of the game played out in the same fashion as the first half, with Dortmund controlling the majority of possession. At the same time though, the balance of power in this match was even but the game was won by the team that committed fewer errors, with Gladbach suffering a loss because of a lack of defensive balance while attacking. 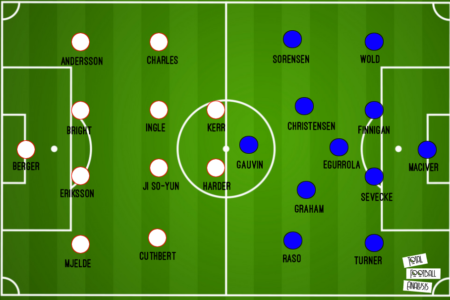 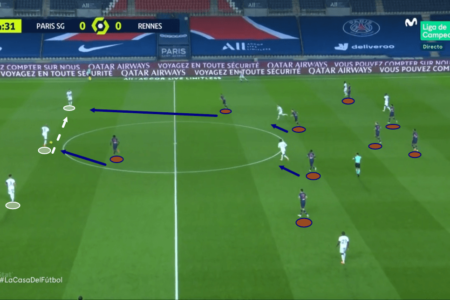