Despite falling away with a five losses in seven games from the end of January to the start of April, Chelsea have clawed their way back into contention for a Champions League spot just as the top four seemed to be settled.

With their run to the final of that competition distracting them and tiring already weary legs, Liverpool are limping across the finish line in the league, as draws against Everton, West Brom and Stoke deny them that confirmation of a spot for next year in Europe’s premier tournament without having to win it at the end of this month. Injuries to Alex Oxlade-Chamberlain, Adam Lallana, Emre Can, Joe Gomez and Joel Matip haven’t helped in a squad lacking depth for the congested schedule.

Antonio Conte lined up in a 3-5-1-1 formation, with Thibaut Courtois in goal, a back three of Cesar Azpilicueta, Gary Cahill and Antonio Rudiger, flanked by Marcos Alonso and Victor Moses, a midfield of N’Golo Kante, Cesc Fabregas and Tiemoue Bakayoko, and Eden Hazard playing off of Olivier Giroud.

Jurgen Klopp set up his team in the usual 4-3-3 formation, but with several changes having endured a tough game against Roma in mid-week: Lorius Karius remained, as did Andrew Roberton, Virgil van Dijk and Dejan Lovren, while Nathaniel Clyne came in at right-back as Trent Alexander-Arnold moved into the midfield alongside Georginio Wijnaldum and James Milner, and the usual front three of Roberto Firmino, Sadio Mane and Mohamed Salah ahead of them.

With their preference for deep defending and lots of cover, Chelsea would pose a problem for Liverpool at the best of times, so with the additional fatigue making it harder for Liverpool to cover ground and sprint as Klopp’s tactics require, Liverpool were always going to find it difficult to break Chelsea down.

And it was breaking Chelsea down that Liverpool had to do. From the off, Chelsea settled back into a deep 5-3-2 formation and forced Liverpool to play through them. The back five ensured there was lots of cover against Liverpool’s front three, with no space behind them for the pacey forwards to run into, while the three ahead of them ensured there was no space for Firmino to drop off into. With Hazard and Giroud blocking passes into the midfield and the three behind them keeping tight to protect the centre, it was difficult for Liverpool to even play it into the midfield, with the ball mostly moving from side to side around the backline.

Liverpool only real had one way to get around this: Alexander-Arnold would pull out to the flank and collect the ball close to the touchline. This had several benefits. Firstly, it allowed Clyne to push high up the pitch down the right and stretch the backline, safe in the knowledge that Alexander-Arnold was covering him. Secondly, it allowed Alexander-Arnold to pick up the ball in an area he’s more used to playing in, meaning parts of his game didn’t have to change and helping him adjust to a different role. Thirdly, it asked questions of Bakayoko, who was playing deep in his own half close to the defence then having to run out to the half-way line to close down Alexander-Arnold, while also leaving just the two midfielders to cover in front of the defence.

By doing this, Alexander-Arnold usually had the space to pick out a long pass over the top, which created Liverpool’s best chances. First, he lifted the ball over the top for Firmino to strike first time from a tight angle, then he later sent over another for Salah to run onto, which Chelsea’s defenders got away but Liverpool’s pressing on the second ball created an opportunity for Mane. These were Liverpool’s best chances but they were half-chances at best. Alexander-Arnold had the space to pick out passes but he still had little space to aim at behind the defence, meaning the passes had to be perfectly-placed and the forwards’ runs had to be perfectly-timed, then, even if they did get the ball, they were surrounded by Chelsea defenders. 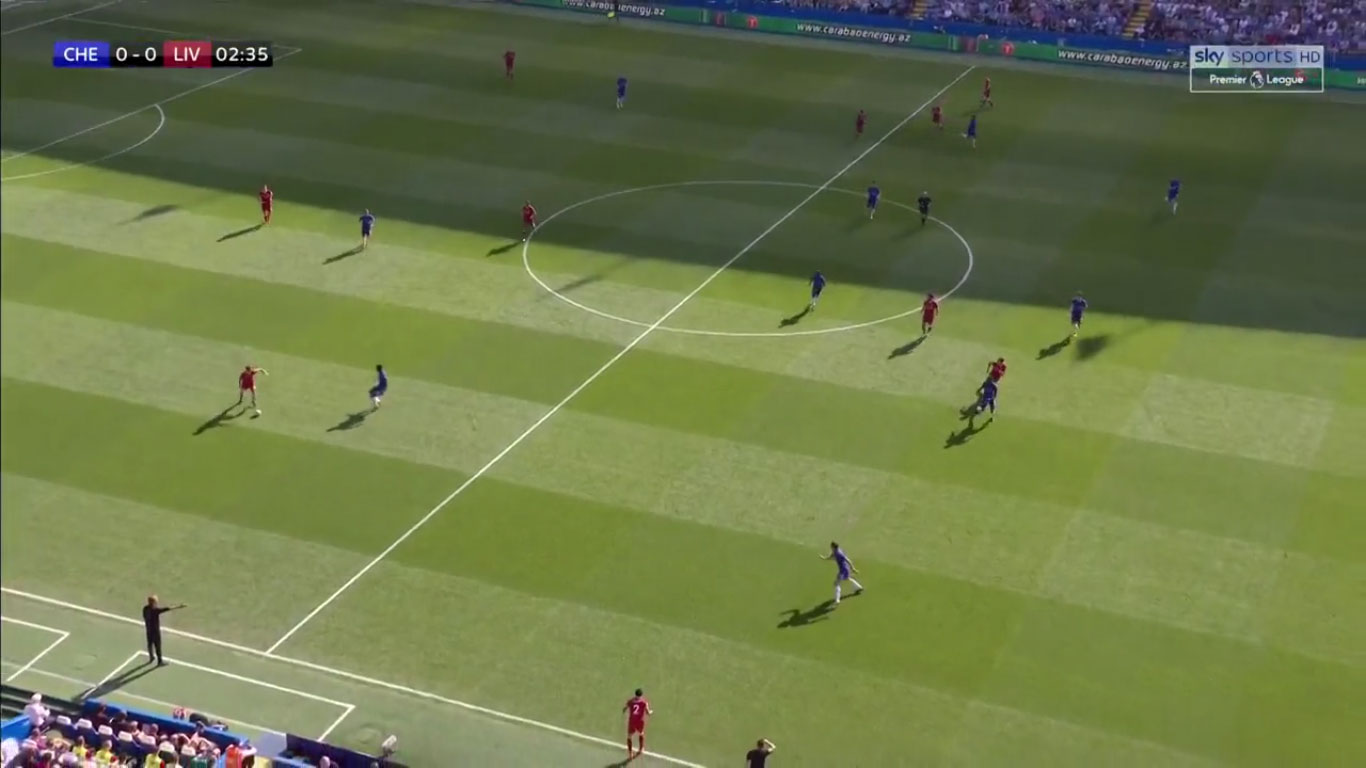 Liverpool’s other chances came either from counter-pressing around Chelsea’s box or from counters, with Chelsea’s tendency to flood the opposition box for crosses, combined with neither Bakayoko or Fabregas moving too quickly to get back once the ball was lost, making it possible for Liverpool’s players to drive straight through the middle of the pitch to the other end. Again though, this required a lot of athleticism which Liverpool’s players couldn’t really muster and Chelsea rarely attacked enough to make it a workable strategy.

One possible avenue of attack that was never really targeted was attacking that space that Bakayoko left to close down Alexander-Arnold, but this was perhaps because that box-to-box player that should have been making those runs was Alexander-Arnold within this system.

There was one moment where Lovren pushed forward on the ball down the right and played into the feet of Firmino dropping off into this gap, drawing in three Chelsea players, which allowed Alexander-Arnold to make a run off the back of Kante into the space Firmino had left, however this happened only once. Having Lovren push forward like this was probably unwise as it left Wijnaldum and Van Dijk alone against Hazard and Giroud, however it might have been what was necessary to break down a stubborn Chelsea defence.

Despite creating Liverpool’s best chances, Alexander-Arnold didn’t have a particularly good game. Although he’s played in midfield at youth level, a game there against one of the country’s best teams looked beyond him. At right-back he doesn’t usually have to check his shoulder when receiving the ball as his back is to the touchline, however he gave the ball away a few times against Chelsea as he was unaware of someone coming in to steal the ball from behind him, while he also had problems tracking runners. This wasn’t helped by him and Milner constantly switching sides throughout the game – this was presumably to make Milner’s runs from midfield harder for Chelsea to track, but, given Alexander-Arnold was struggling, changing all his reference points every 10 minutes might have made things more difficult than necessary for him.

That said, much of his struggle came down simply to fatigue. Milner was suffering even more from this, running on fumes from the first minute, so the two of them weren’t close to the running required of them, which benefited Chelsea both defensively and offensively.

Chelsea’s attacks generally consisted of long balls up to Giroud. As he was on the right of the forward pairing, this put him up against Van Dijk though, and the Frenchman was rarely able to win aerial challenges against the dominant 6ft 4 defender. Had he been against Lovren he might have had more success, as the aggressive Croat can be drawn into challenges he shouldn’t, but with the way Chelsea set up, he had to settle for fighting a losing battle with Van Dijk.

Chelsea had far more success sending it out to the wing-backs instead. As Liverpool try to keep their wingers high up the pitch, it’s the job of the outside midfielders in the three to move out and support the full-backs in defence (although with the success of Salah this has sometimes become a 4-4-2, with Mane moving back to support Robertson and Salah staying high in the centre). With Milner and Alexander-Arnold (and Mane) lacking the legs to cover the ground, Robertson and Clyne could often be left one-on-one though, and after lots of running in midweek Robertson was struggling against Moses.

This was what ultimately cost Liverpool the match, with Moses cutting in from the right to cross for Giroud to head home. The goal looks worse in slow-motion for Lovren, who fails to compete in the header with Giroud because he was distracted by the run of Fabregas, but it’s such a split second decision there’s little he can do.

The game then continued as it had before. Chelsea sat back and Liverpool failed to break them down. The home side showed little attacking ambition but they still looked more likely to score than their opposition.

With victory, the hope of Champions League football for Chelsea remains next season, although Liverpool can confirm their place before the final with a victory over a Brighton side with little to play for. The issues with breaking down a deep defence remain for Liverpool, however they have bigger things to think about and simply getting through the 90 minutes without any more injuries was a relief.