Chelsea vs Manchester United was the lone Premier League battle in the fifth round of the FA Cup. Maurizio Sarri’s beleaguered Chelsea team were dumped out of the cup by two first-half Manchester United goals. The loss has put Sarri firmly on thin ice as Chelsea fan patience is wearing out due to Sarri’s predictability in the team setup.

Chelsea trotted out the expected 4-3-3 formation. The midfield was anchored by Jorginho with Mateo Kovacic and N’Golo Kante higher up the pitch. New signing Gonzalo Higuain got the start in the central forward position flanked by Eden Hazard and Pedro. Cesar Azpilicueta, Antonio Rudiger, David Luiz, and Marcos Alonso comprised the back line with Kepa Arrizabalaga was in goal.

Manchester United started in a 4-3-1-2 formation. Ex-Chelsea player Juan Mata slotted into the attacking midfield spot in place of the injured Jesse Lingard. Marcus Rashford and Romelu Lukaku started up top. Nemanja Matic anchored the midfield with Ander Herrera on the right and Paul Pogba on the left. Ashley Young, Chris Smalling, Victor Lindelof, and Luke Show completed the back line with the Argentinian Sergio Romero in goal. 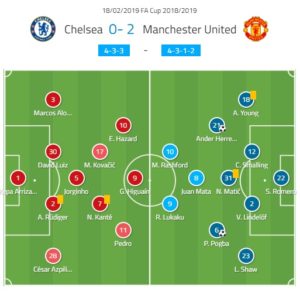 From the off, Manchester United showed a clear attacking intention of exploiting the space behind the Chelsea full-backs and dragging their central defenders out of shape. Here we see a chance in the very first minute. Pogba is on the ball with Mata between the lines. Notice Lukaku, highlighted below, positioned all the way out on the left touchline. 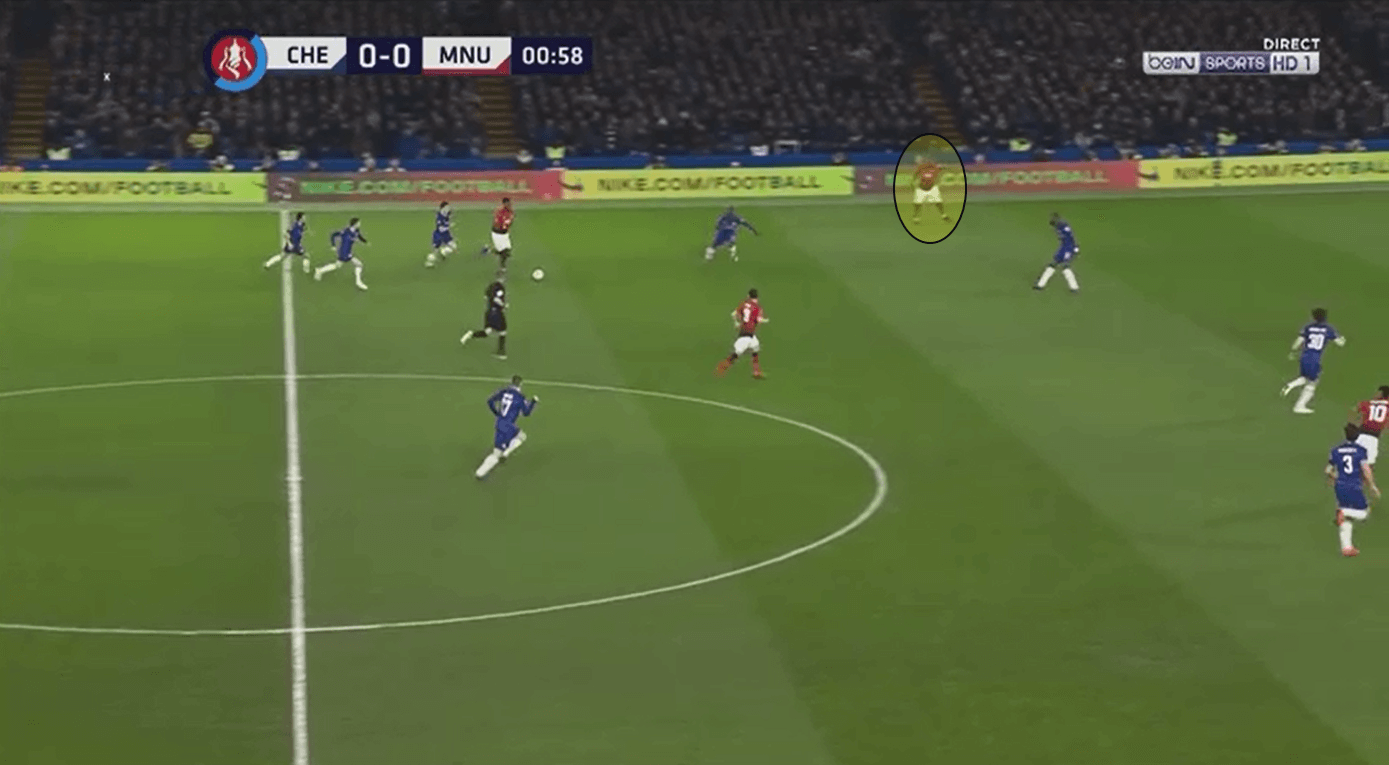 The Chelsea full-back is caught high up the field. Manchester United had the clear intention of getting the ball in behind on the flanks to draw out and isolate the Chelsea central defender Antonio Rudiger.

From the aerial view, Pogba plays the ball inside to Mata who plays Lukaku down the line. Rashford is a willing runner for a crossed ball into the box. A desperate lunge by Chelsea’s David Luiz saves the early goal. 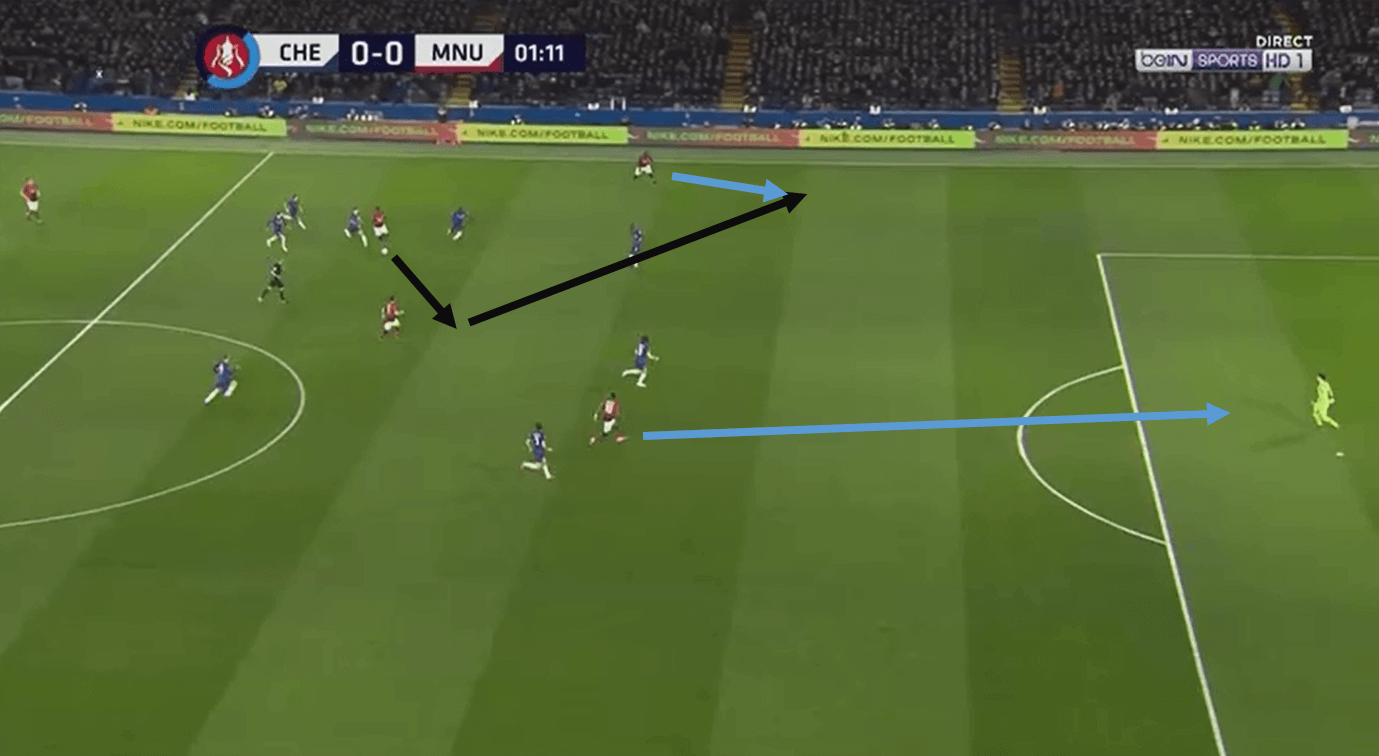 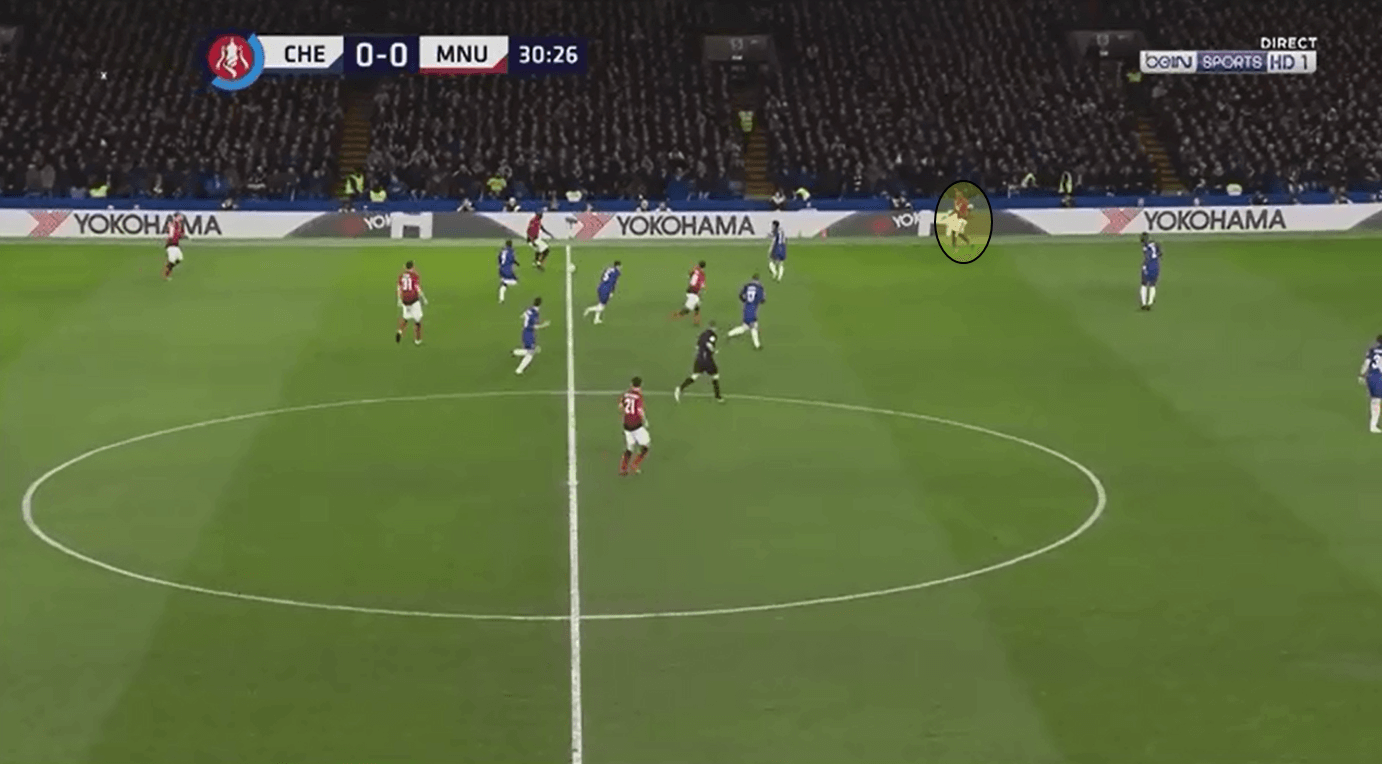 From the aerial view below, Lukaku plays Mata between the lines, who in turn plays Pogba into the wide channel. Once again Rudiger is successfully isolated through Manchester United intentionally targeting the area behind the full-back. Rashford once again makes a great hard run into the box. The difference for the goal is that Herrera, highlighted below, is a willing runner to get into the box with Rashford. 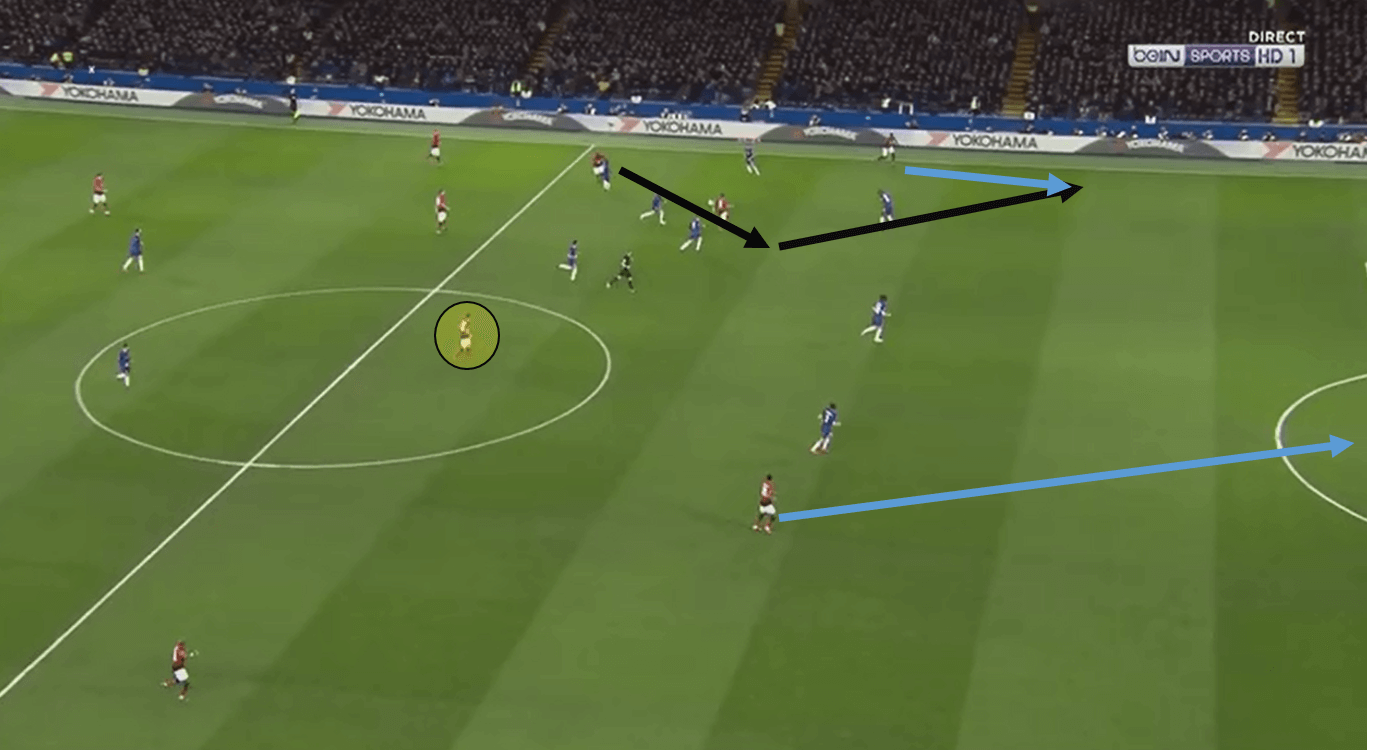 Rashford’s run draws the attention of the defence and Herrera, calling for the ball with arm aloft, makes a committed run into the box. While isolated with Rudiger, Pogba is able to create enough space to put in a perfect cross for the Herrera goal. 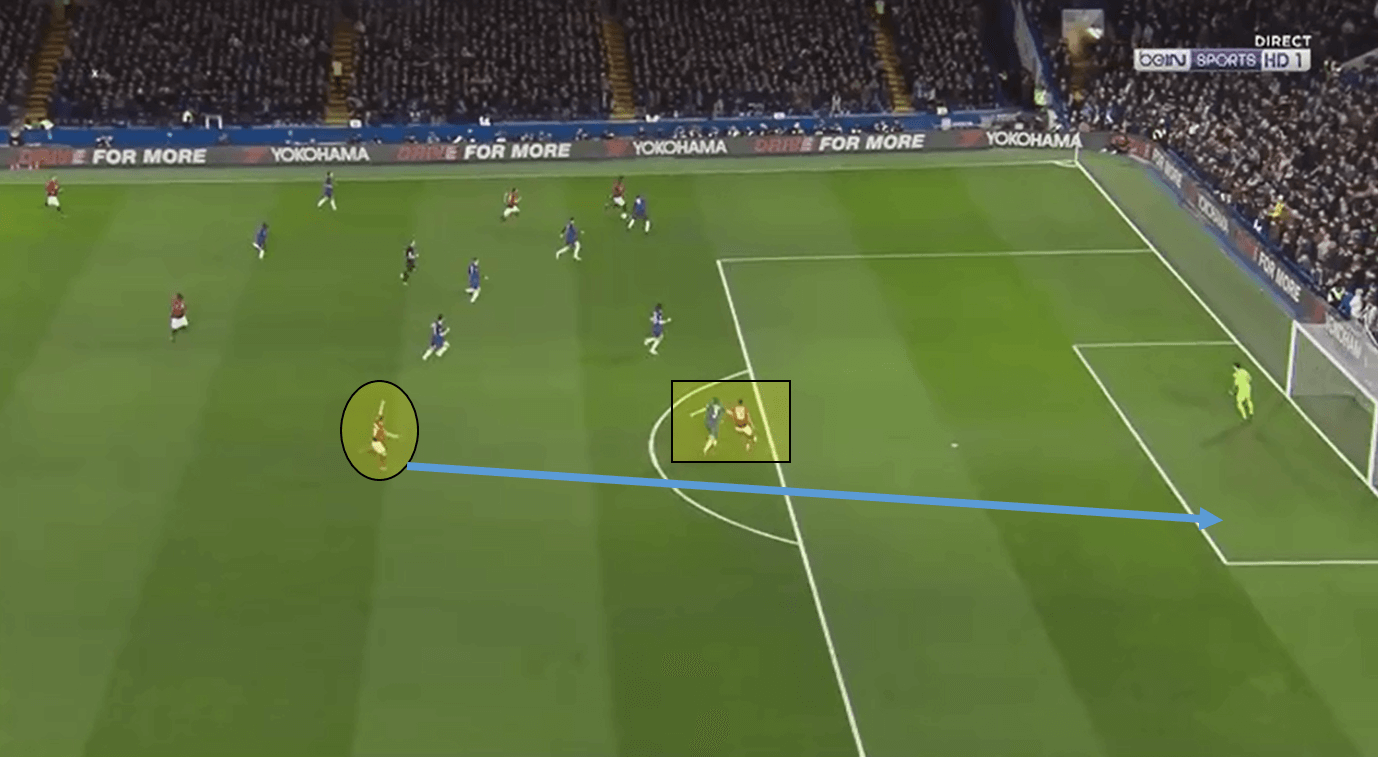 The attacking game plan was crystal clear. Attack into the space behind the Chelsea full-backs and get runners into the centre of the box. According to whoscored.com, Manchester United attacked 78% of the time down the flanks and only 22% of the time through the middle. They consistently positioned a forward or midfielder on the sideline to exploit the space behind the Chelsea full-backs.

Manchester United’s focus on the flanks combined with the additional strategy of getting runners into the box to take advantage of the Chelsea central defenders moving out of shape. According to the whoscored.com, Manchester United took 57% of their shots from the middle channel.

Both goals were the result of Manchester United isolating an attacker in the wide channel against a Chelsea central defender, and a midfielder making a committed run into the middle of the penalty area. Clear tactical instructions from the manager can be seen from Manchester United’s 78% of attacks down the channels and 57% of shots from the centre.

During the first 30 minutes of the match with the match at 0-0, Manchester United had Rashford and Lukaku pushed up on the Chelsea central defenders, Rudiger and Luiz. This defensive positioning left the flanks vulnerable to Chelsea overloads. Here Rudiger plays a ball to an overload on the left. 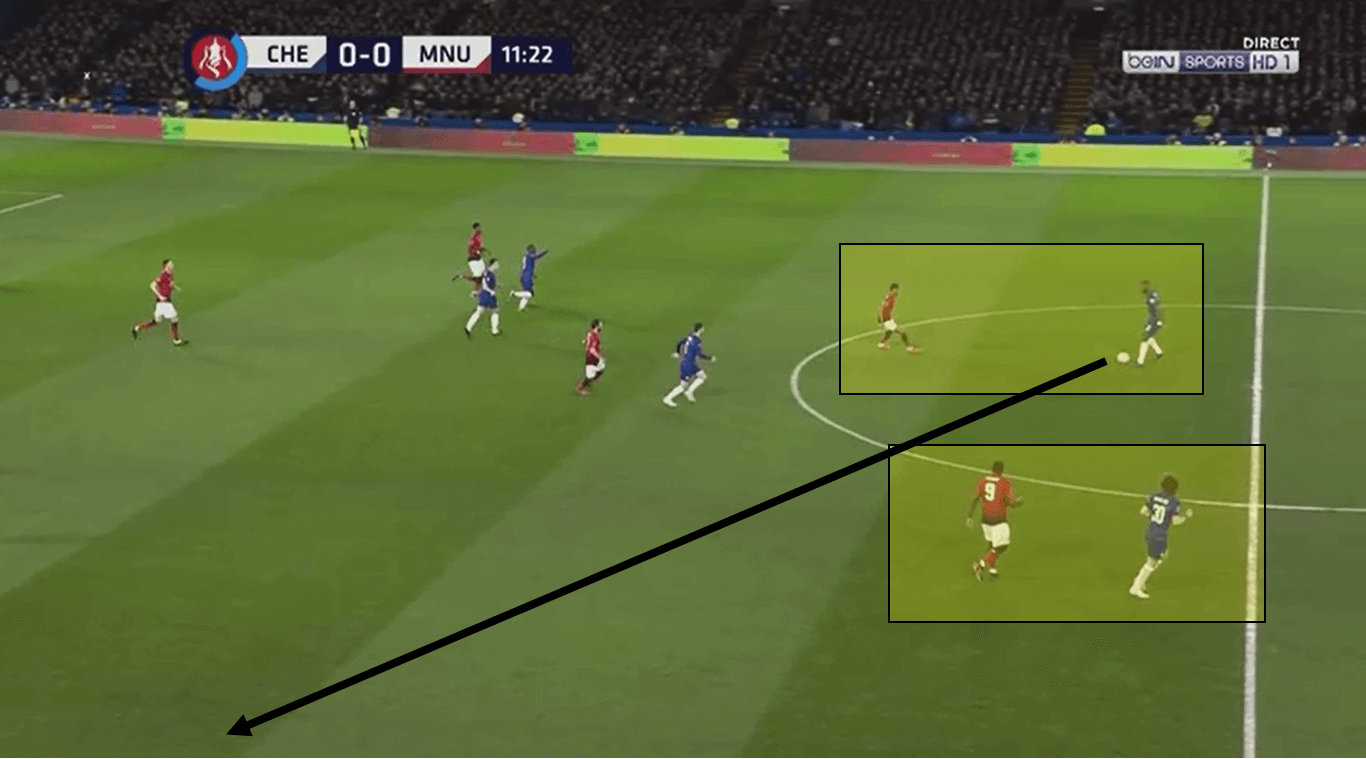 Kovacic receives the ball from Rudiger and has a 3v2 overload. Hazard and Alonso combine to get a great shot for Hazard that blazed just wide of the post. 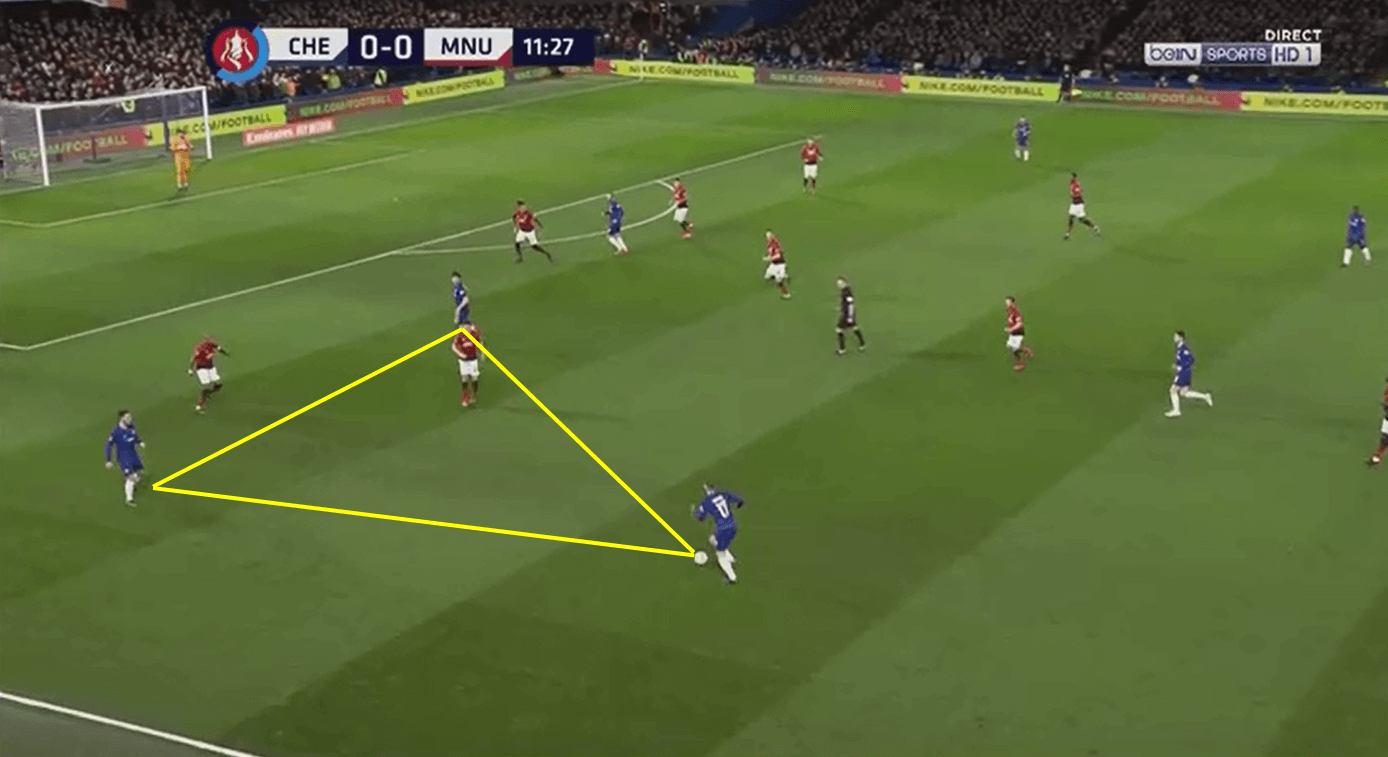 Again with the game at 0-0, Chelsea are able to exploit the space on the wing due to Rashford and Lukaku defending narrowly with the Chelsea central defenders. Below Kante switches the ball wide to Azpilicueta. The Spaniard is able to pick out Higuain with a great cross that split the Manchester United defenders. The visitors dodged a great Chelsea chance as the header went wide. 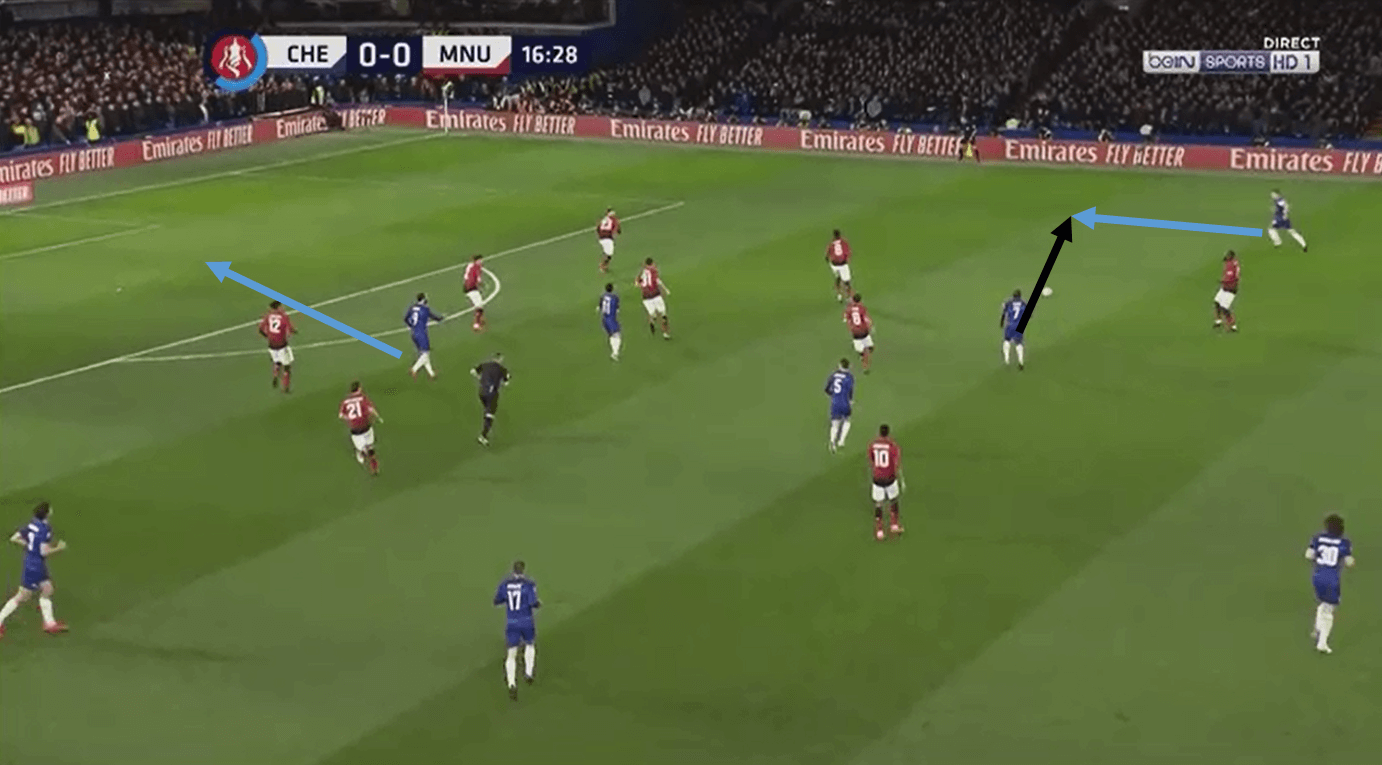 Manchester United defensive setup when ahead 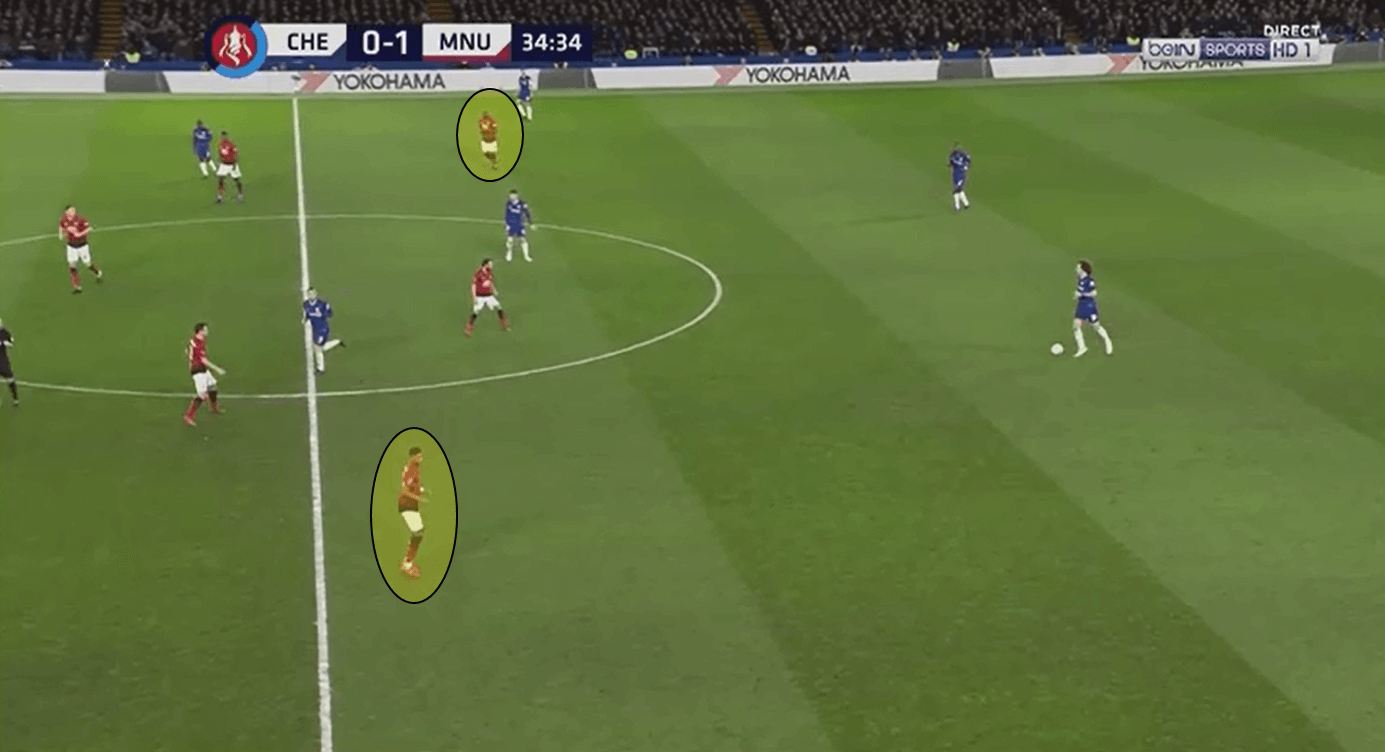 This adjustment made Mata the highest defender for Manchester United. With the lead, Manchester United were able to adjust defensively to take away the overloads wide where Chelsea were having much success. 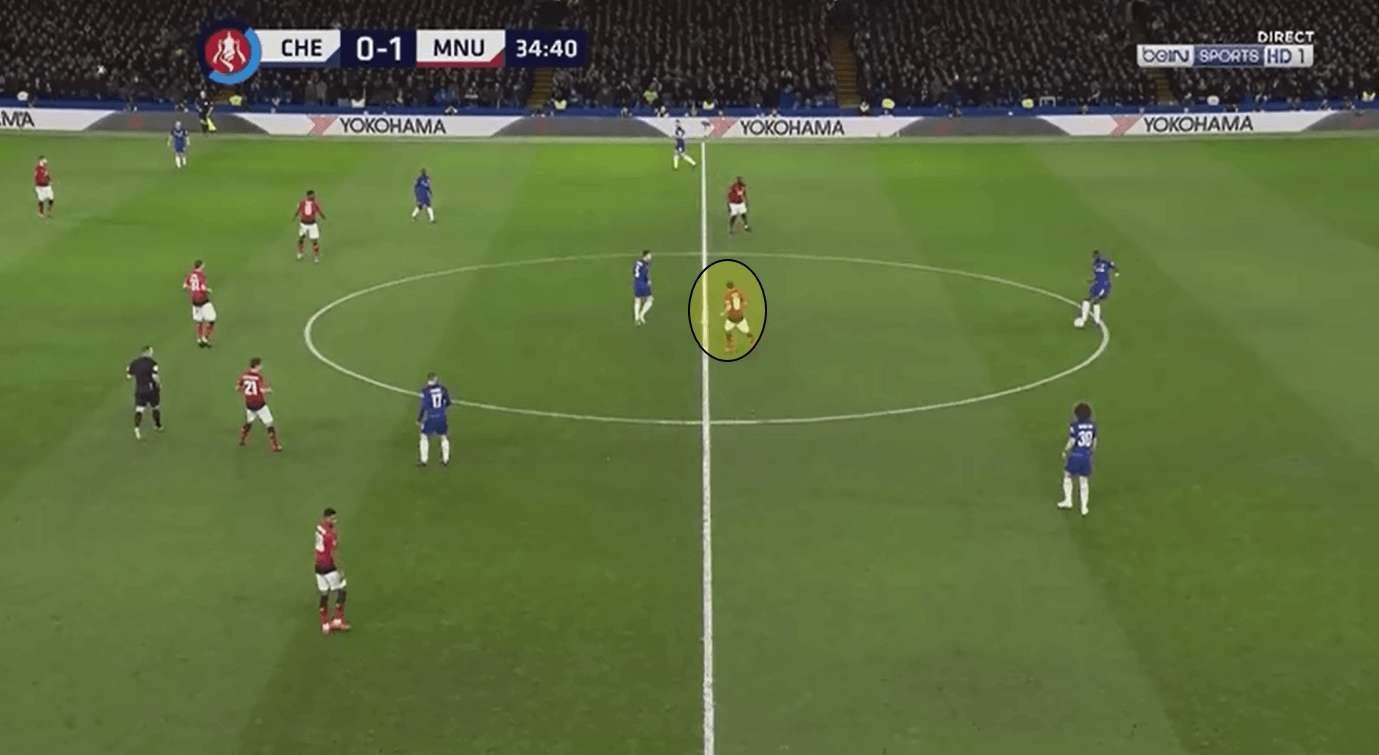 Mata was charged with shadowing Jorginho and stepping to Rudiger or Luiz if they crossed midfield with the ball. Here we see Luiz dribbling forward with Mata closing down. Notice Rashford, highlighted, has his back turned to the ball and is intentionally tracking Alonso. Rashford has a sole focus of defending wide. 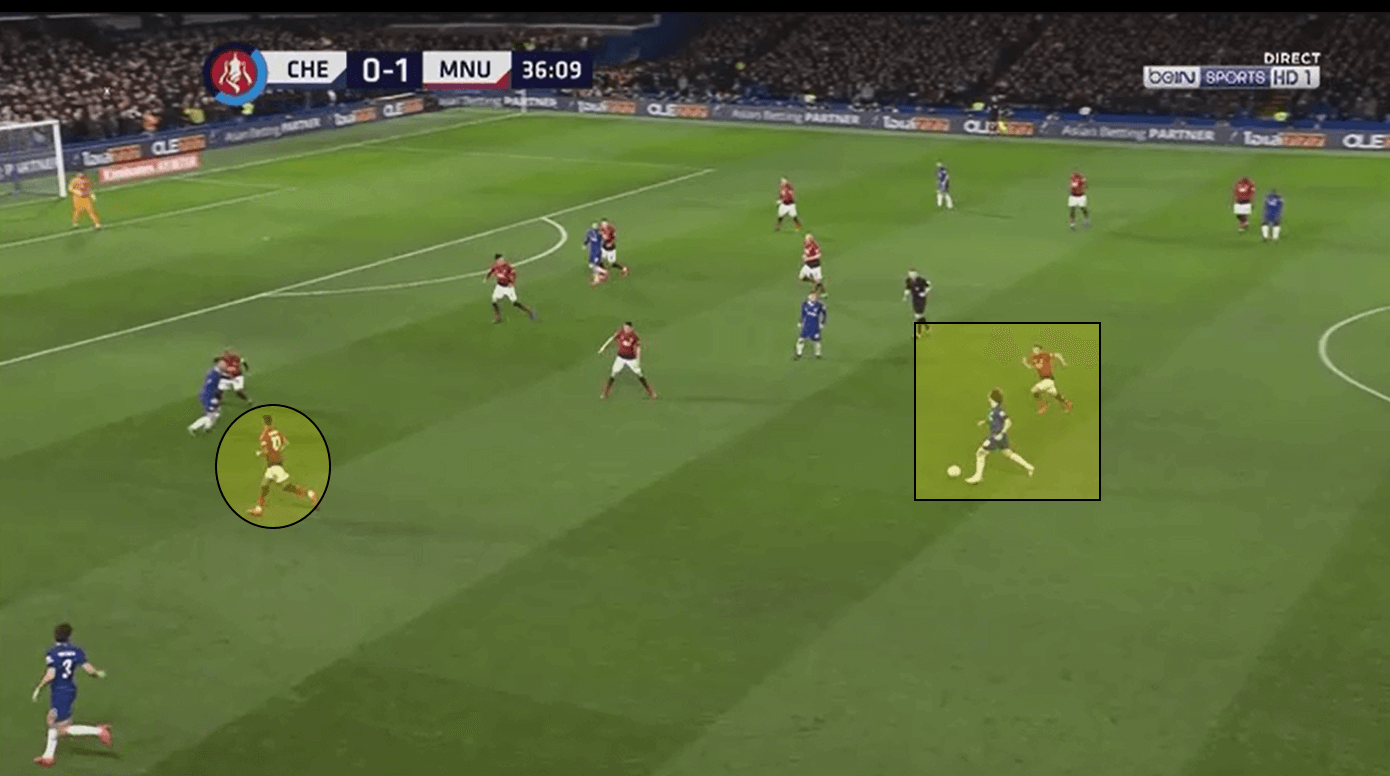 With the lead, it was a purposeful tactical change by Ole Gunnar Solskjær to take away the wide overloads and force Rudiger and Luiz to be playmakers. For the match, Rudiger and Luiz combined for 126 passes. They accounted for almost 20% of Chelsea’s passes. The central defensive duo had more passes than Jorginho and Hazard combined. While Chelsea held a 66% to 34% possession advantage, they had zero shots on target following the Manchester United defensive adjustment.