The summer of 2021 saw the dawn of the manager carousel, where the chopping and changing of head coaches were commonplace between clubs such as Bayern Munich and Juventus. A more unnoticed managerial appointment was Bo Svensson, who previously took charge of FC Liefering before taking the reins at FSV Mainz 05. Many might have taken a blind eye to the 42-year-old’s change of club, but spectators are now taking notice as Mainz are currently punching at the top of the Bundesliga table as they stood 5th place, with a marquee win vs RB Leipzig.

Adi Hütter was also a part of the manager merry-go-round as he vacated his position at Eintracht Frankfurt and has replaced Marco Rose at Borussia Mönchengladbach. Adi Hütter has not been as influential as the former as his Gladbach currently sat in 9th place with poor performances against Bayer Leverkusen, Union Berlin, and Hertha Berlin. Gladbach clearly has the talent to set the pace and progress, but Bo Svensson’s Mainz have clicked into gear, so this matchup should be a tight affair.

This tactical analysis will discuss Gladbach’s in possession tactics and the different variations utilised when trying to break down Mainz’s medium block. In addition, I will delve into qualities and downfalls when they have the ball and Gladbach’s use of Matthias Ginter to accommodate Joseph Scally.

Mainz made use of a 3-5-2 formation with Robin Zentner in goal, a back three, which comprised Stefan Bell, Alexander Hack, Moussa Niakhaté. In the wing-back positions was Aarón Martin on the left side and Silvan Widmer on the right. Within midfield positions, Lee Jae-sung, Dominik Kohr and Jean-Paul Boëtius. Mainz’s striker partnership comprised Karim Onisiwo and Jonathan Burkardt.

Gladbach traded their usual 4 at the back formation for a 3-4-2-1 formation with club captain Yann Sommer in goal: former Dortmund defender, Matthias Ginter, Nico Elvedi, Ramy Bensebaini. Luca Netz and Joseph Scally were placed at wing-back, with Kouadio Koné and Denis Zakaria as a double pivot. Within attacking positions, Jonas Hofmann, Alassane Pléa with Breel Embolo leading the line. 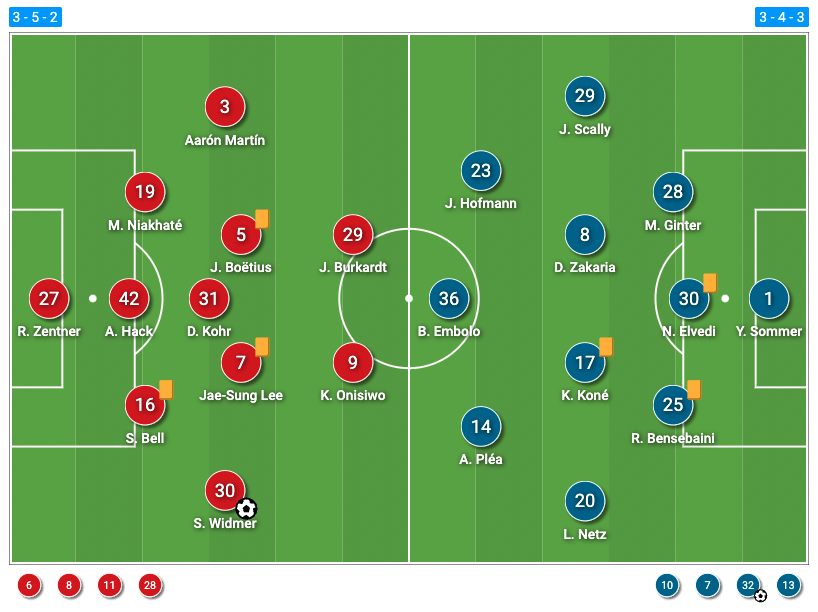 Coming into this game versus Mainz, Adi Hütter’s team had a coherent plan of how they were going to progress the ball forward and through the thirds. As mentioned prior, Gladbach utilised a 3-4-2-1 formation within this game, but during previous outings, set up in a 4-2-3-1 formation.

During the first phase of play, Gladbach employed different iterations for playing out. Within these different iterations, a common theme that was shown throughout was creating superiorities to beat the opposition press. For example, using a 3-2 build-up structure. Mainz pressed their opposition with a narrow front 3 and high midfield line, with their aim to deny space and time into the centre-backs on the ball and keep Gladbach’s double pivot within their cover shadow and in-result, stop passing lanes to Kouadio Koné and Denis Zakaria in midfield. Gladbach’s 3-2 structure was effective due to creating a 5v2 scenario within this phase.

In addition, Gladbach used width well as one of Jonas Hofmann or Florian Neuhaus, who came on as a substitute would drop into the back three stretching across the pitch, which created space for Alassane Pléa as he could collect the ball within half-space. Another build-up pattern that was utilised within the Gladbach playbook was a 3+1 structure, with rotations up-field. Kouadio Koné was more reserved within the six spaces just in front of the back three and Dennis Zakaria more advanced within the left half-space.

Through this movement, Alassane Pléa could shift into central areas and pick up the ball within the number ten position and be the point of a diamond in midfield. When this form of build-up began for Gladbach, Lee Jae-sung would vacate the Mainz’s front three and join the midfield line to pick up Dennis Zakaria which created a 4v3 situation in Gladbach’s favour. 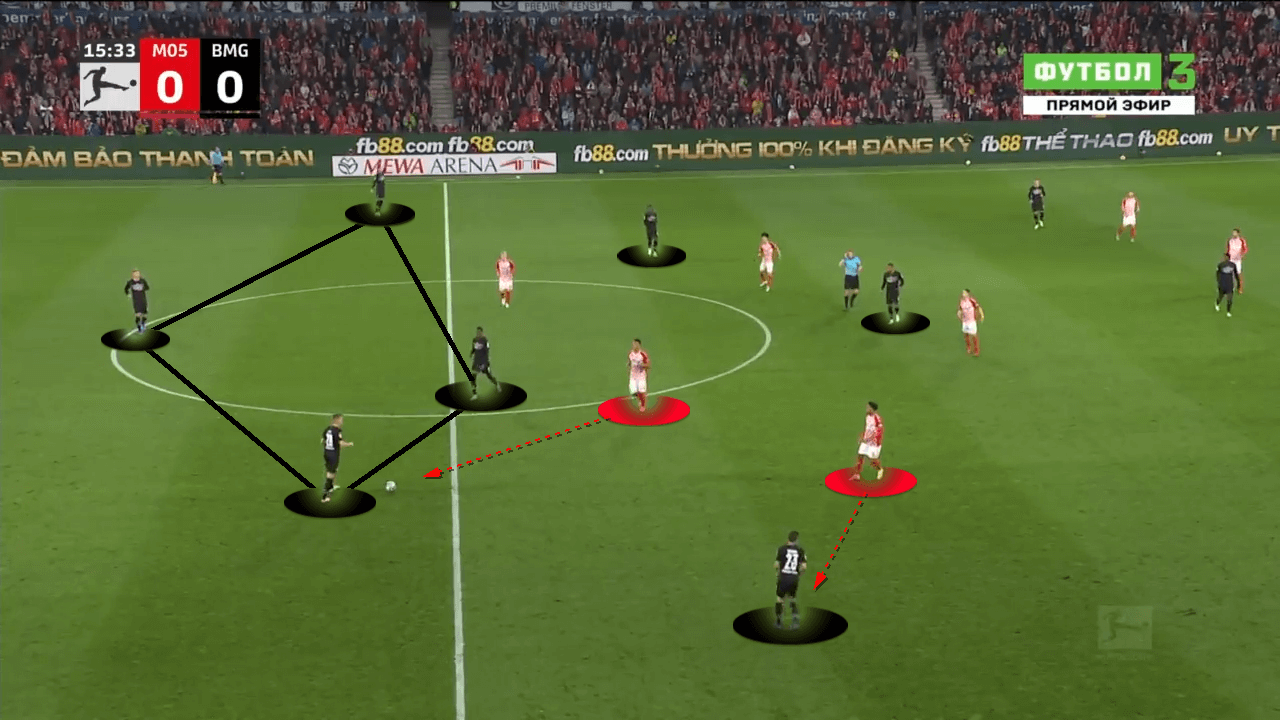 The good and bad of Mainz’s possession game

Bo Svensson’s Mainz team is not a possession team that passes opposition teams to death, based on the quality within the squad. This season, when Mainz has the ball, Mainz can create openings and cause issues for whoever they come up against. These two sides of their possession game were on display vs Gladbach. Similar to their to Gladbach, Mainz utilised a 3-2 structure, with their intention to play down the wings of the pitch and hurry the ball laterally and break forward.

Here we can see Mainz’s 3-2 structure in action vs Gladbach’s high press. Mainz moved the ball out wide; their double pivot comprising Dominik Kohr and Jean-Paul Boëtius is moving towards the ball carrier. 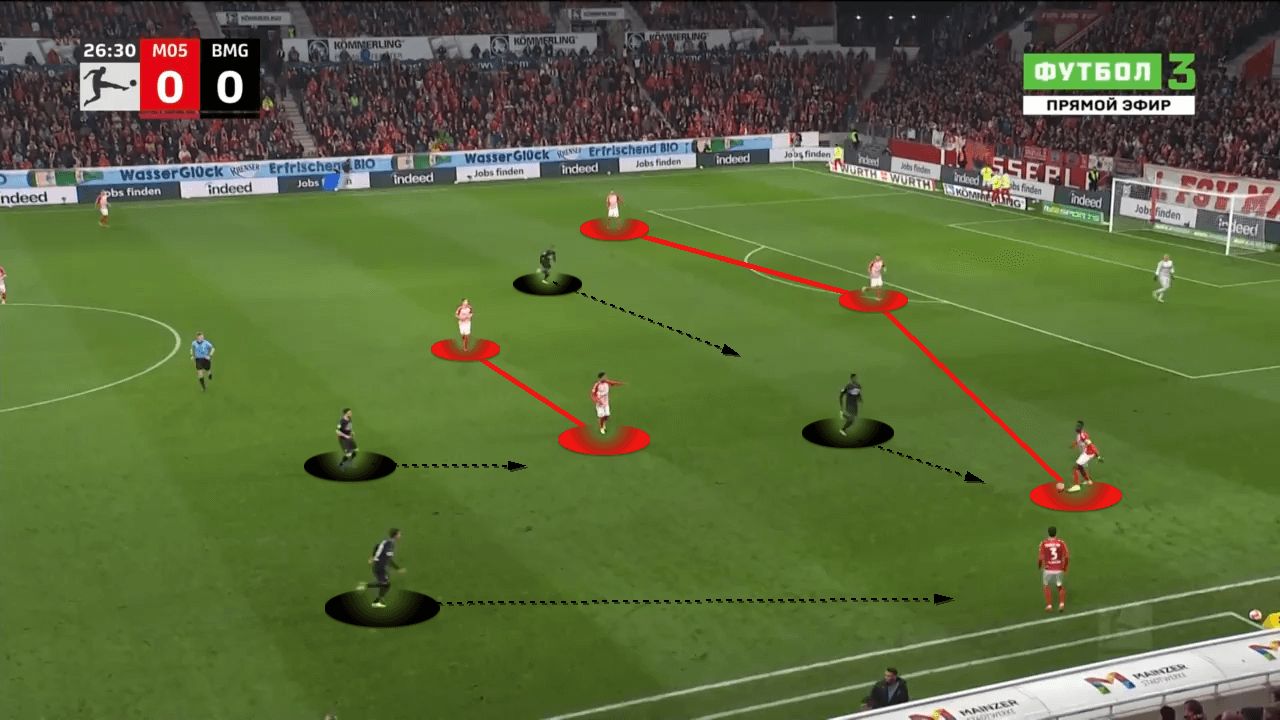 Within the same passage of play, Aarón Martin finds himself in possession of the ball and sends a long ball through to Silvan Widmer on the opposite side, in a substantial amount of space. Mainz could grant the right wing-back with so much green grass in front of him through their use of overloading one side to create space on the other. 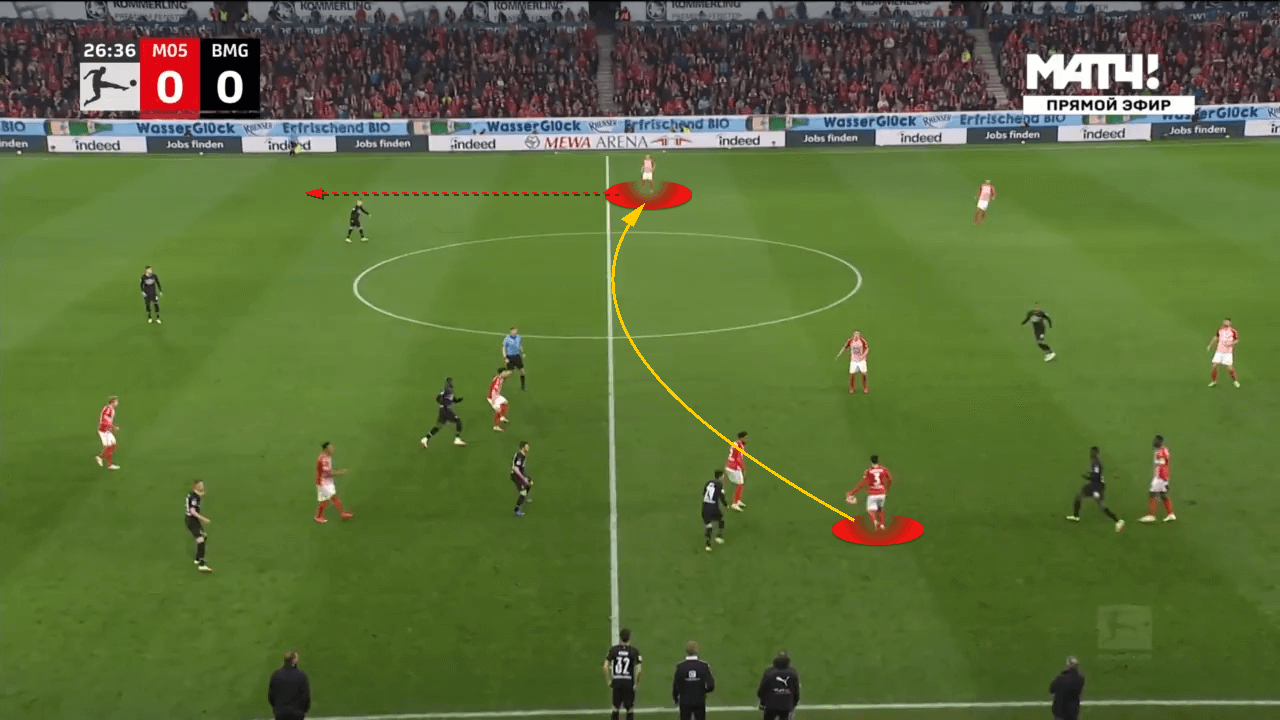 With this being said, when Mainz could not find lateral openings to the opposite flank, their possession game stopped being effective and resulted in long balls down the channel to striker Karim Onisiwo who was tasked to hold off opposition defenders while in possession of the ball while teammates arrived and supported.

Gladbach’s attack on the right-hand side

As described above, Gladbach attacked in a variety of ways which helped break down Mainz’ defensive block, but a key aspect of their attacking play was directly played down the right side of the field. Right-back Joseph Scally has been a revelation within the Gladbach side, as he possesses excellent ball manipulation skills and acute crossing from all angles. Adi Hütter is aware of the youngster’s attacking ability and tries to allow him to play within the final third as much as possible.

To facilitate this, right centre-back Matthias Ginter positioned himself as auxiliary right back, which allowed Scally to push forward, knowing he had security behind him. Once Gladbach was in this space within the final third, Joseph Scally and Jonas Hofmann did well to exchange passes between each other and create openings. 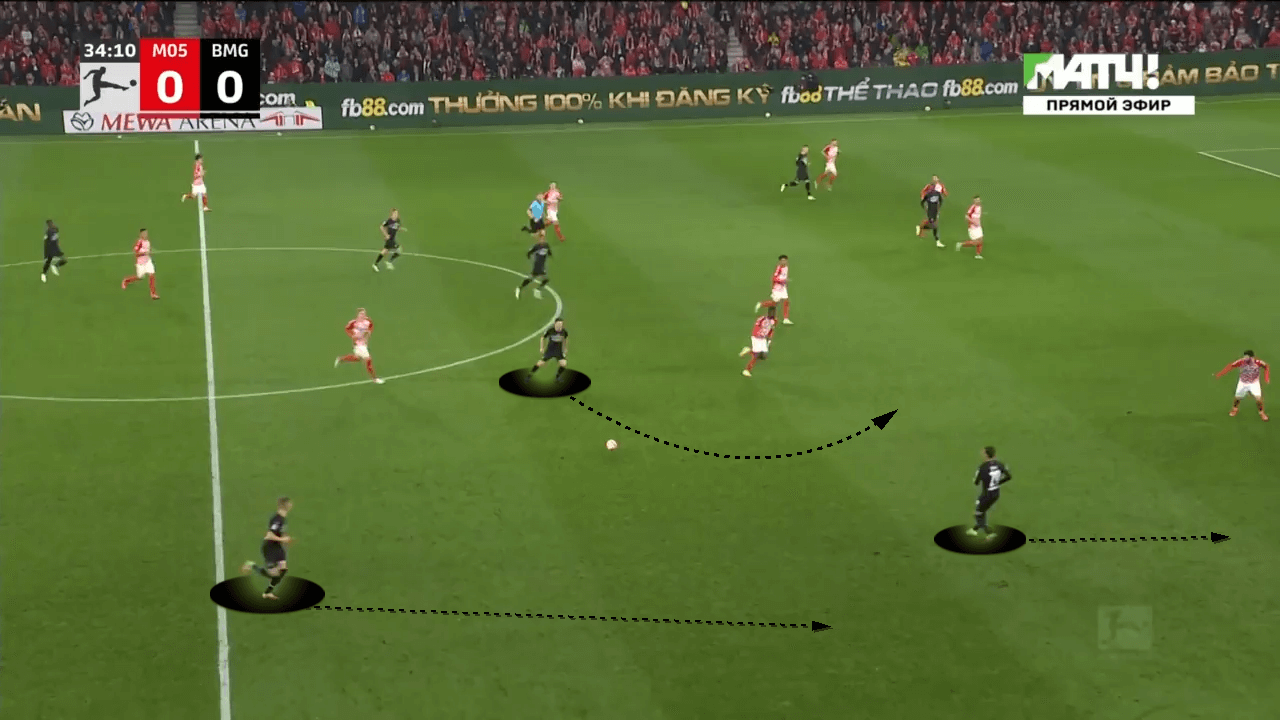 Roles have reversed as Mainz pushed for European places and Borussia Mönchengladbach sat 9th place coming into this Friday night affair. Gladbach took control of this game with no intention of letting that control go as they operated using different ways to move through the thirds. Gladbach’s goal was quite fortunate, but their play deserved a slice of luck. Mainz excelled in some areas as well, but lacked diversity within their play, which allowed them to grab all three points.