The 11th game week of the 2021-22 Premier League season featured the Manchester Derby where local rivals Manchester United and Manchester City battled it out at the Old Trafford. While City have so far had a decent start to the season with a couple of upsets like the one against Crystal Palace last week, United have had a very poor season with pressure mounting enormously on Ole Gunnar Solksjaer’s head owing to their poor string of performances over the last couple of months.

Despite winning handsomely against Spurs, Ole’s men had a lot to prove against much more formidable opposition and local rival City with a win seriously important to their season and the future of Ole at the club.

This tactical analysis features the tactics used by both the managers and how Pep Guardiola outclassed his counter-part to take away the 3 points comfortably. Let’s begin the analysis.

Manchester United lined up in the same formation that Ole has been using since the Liverpool hammering. With Varane being injured, Bailly was drafted in his place while Greenwood came into the lineup for the injured Cavani. 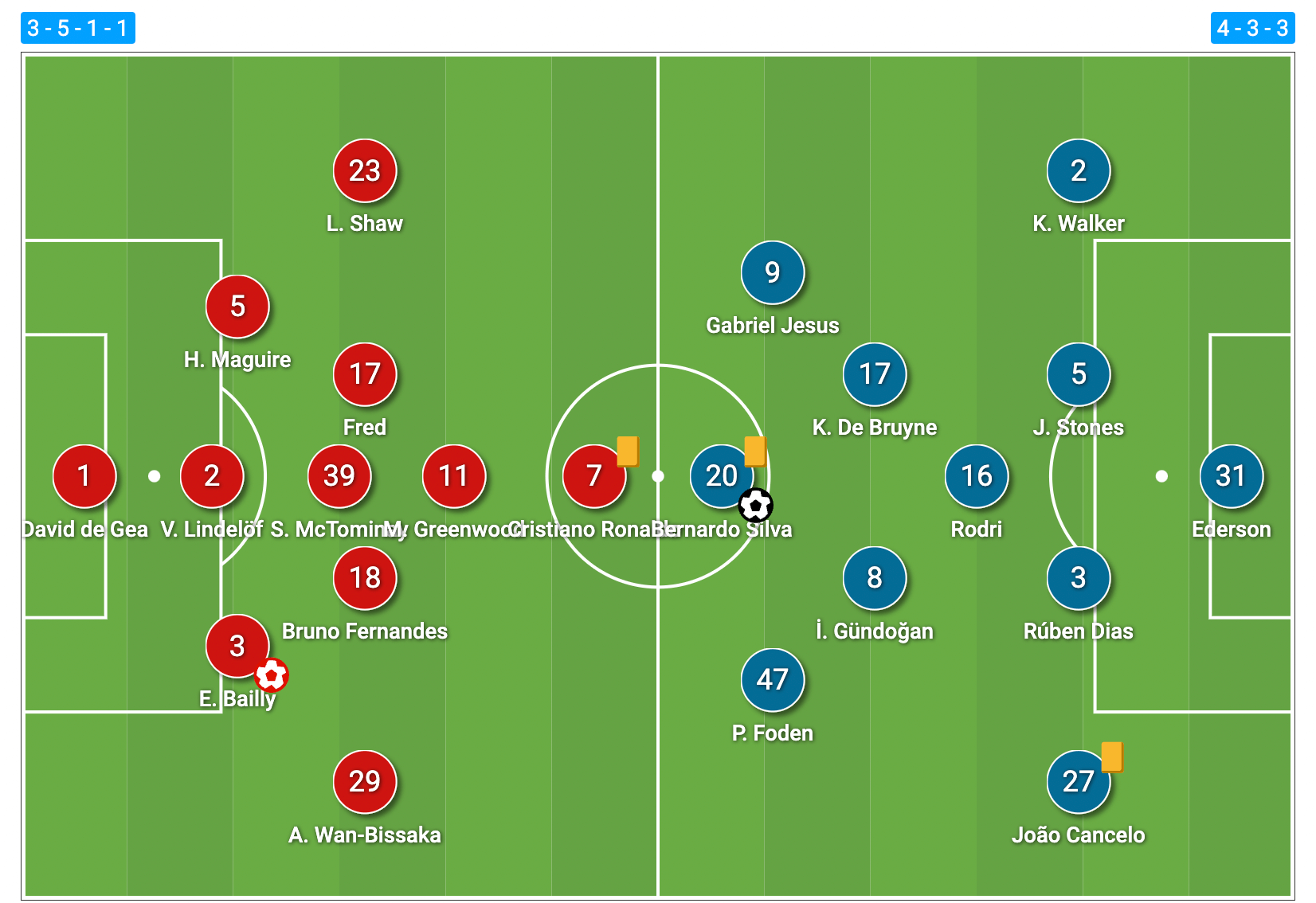 Manchester City, on the other hand, made two changes to the lineup where Stones replaced the suspended Laporte while Gundogan replaced Jack Grealish in the lineup as Guardiola once again went with a double false-9.

City’s plan in for the game

With United using a 3-4-1-2 in possession, City decided to go with the same 4-3-3 that they been using under Guardiola since his arrival at the club. Ole has been using the system ever since the hammering United received at the hands of Liverpool. It worked to an extent against Spurs and Atalanta but against the latter, there were a few issues with the system which City also looked to target.

The system shifted to a 3-5-1-1 off the ball where Ronaldo would be the lone forward while Greenwood would drop behind and look to mark Rodri and keep close tabs on him. Fernandes would form a 3-man midfield alongside McTominay and Fred where the former would be the defensive pivot. 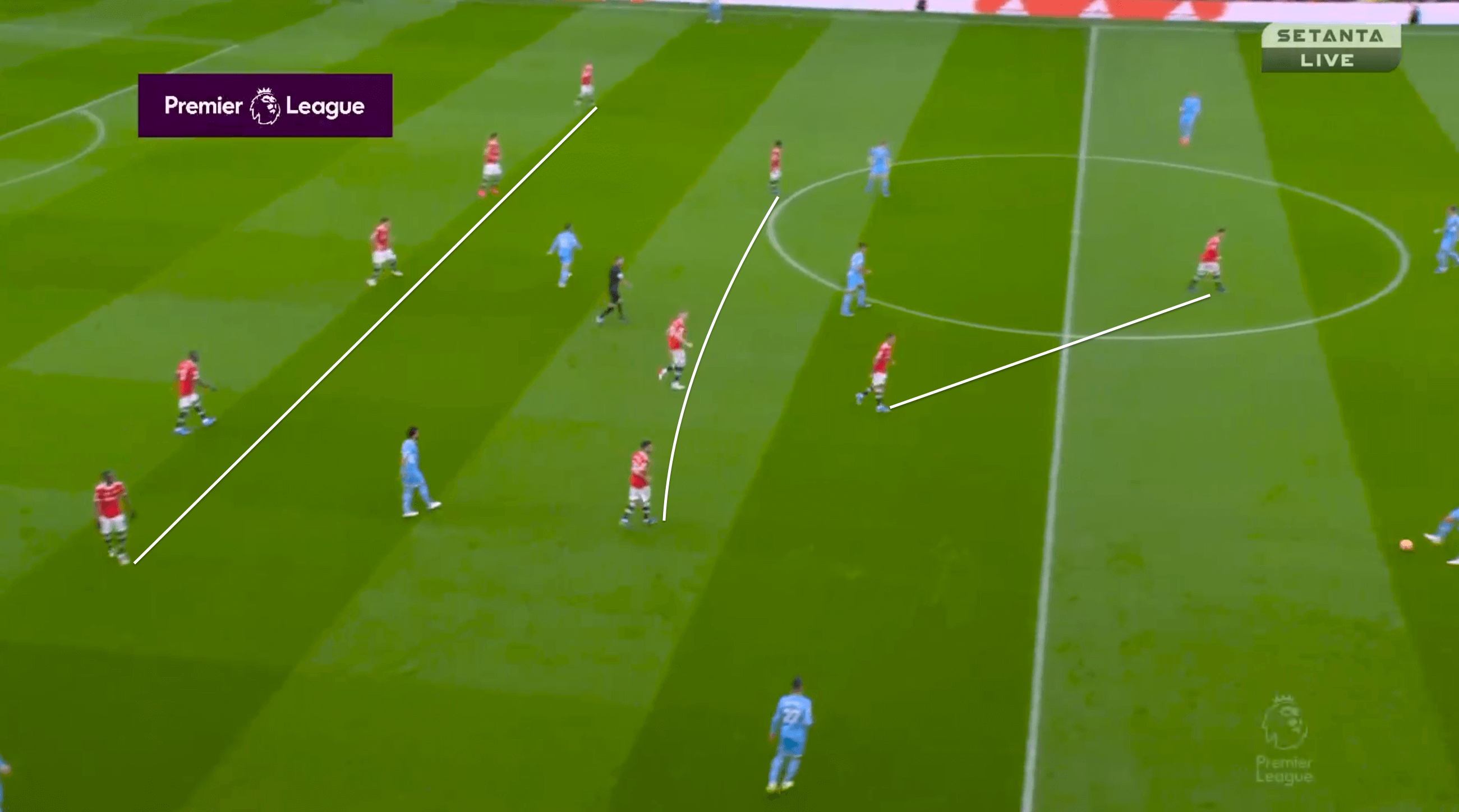 The idea was to squeeze the space centrally from United’s point of view that would deny the space for the City players to make run into and drop. The likes of Gundogan, who played as a false-9 alongside Bernado Silva is an expert in doing this. But the issue for United were the lack of intensity in their press especially in the wide areas where winning the ball back is considered a key thing there. But United decided against that and were more passive in their press. 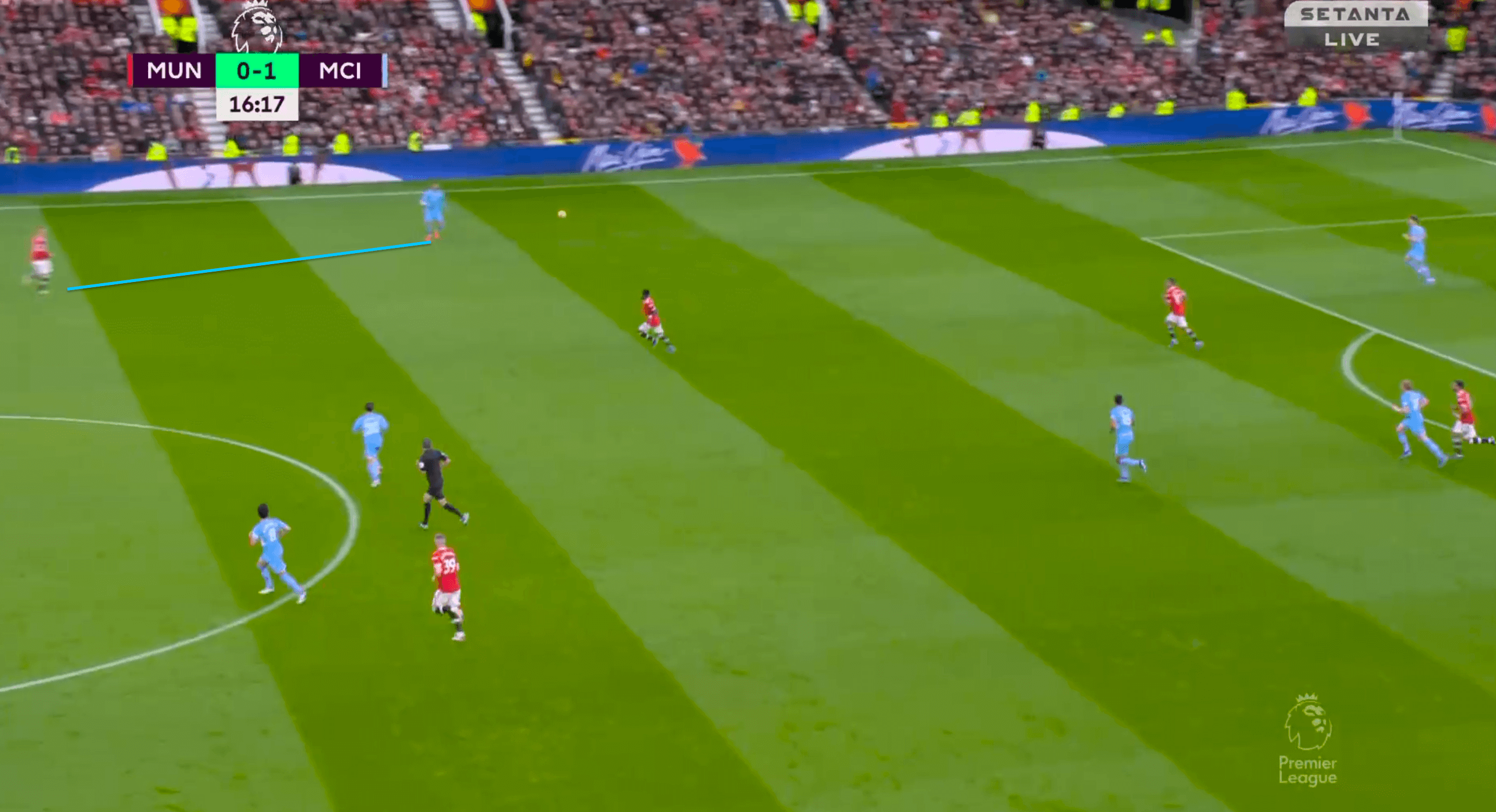 We can see that in the above image where the front players have pressed high to win the ball higher up the pitch. But when the ball moves to the flank towards Kyle Walker, Luke Shaw is very deep and doesn’t press higher up the pitch. This means that Walker can receive the ball and move forward with it or play to a player in space.

But the main thing that Pep and his side were prepared and trained were to use switches of play to the opposite flank to immediately use the space when United’s midfield were dragged from side to side. This is probably the weakness of the 3-5-2 system as there is too much space conceded on the far side half-space. We can see that in the image below where we can see that Cancelo has too much space ahead on the far side and if played, he could exploit the space and be in a 2v1 situation against AWB. 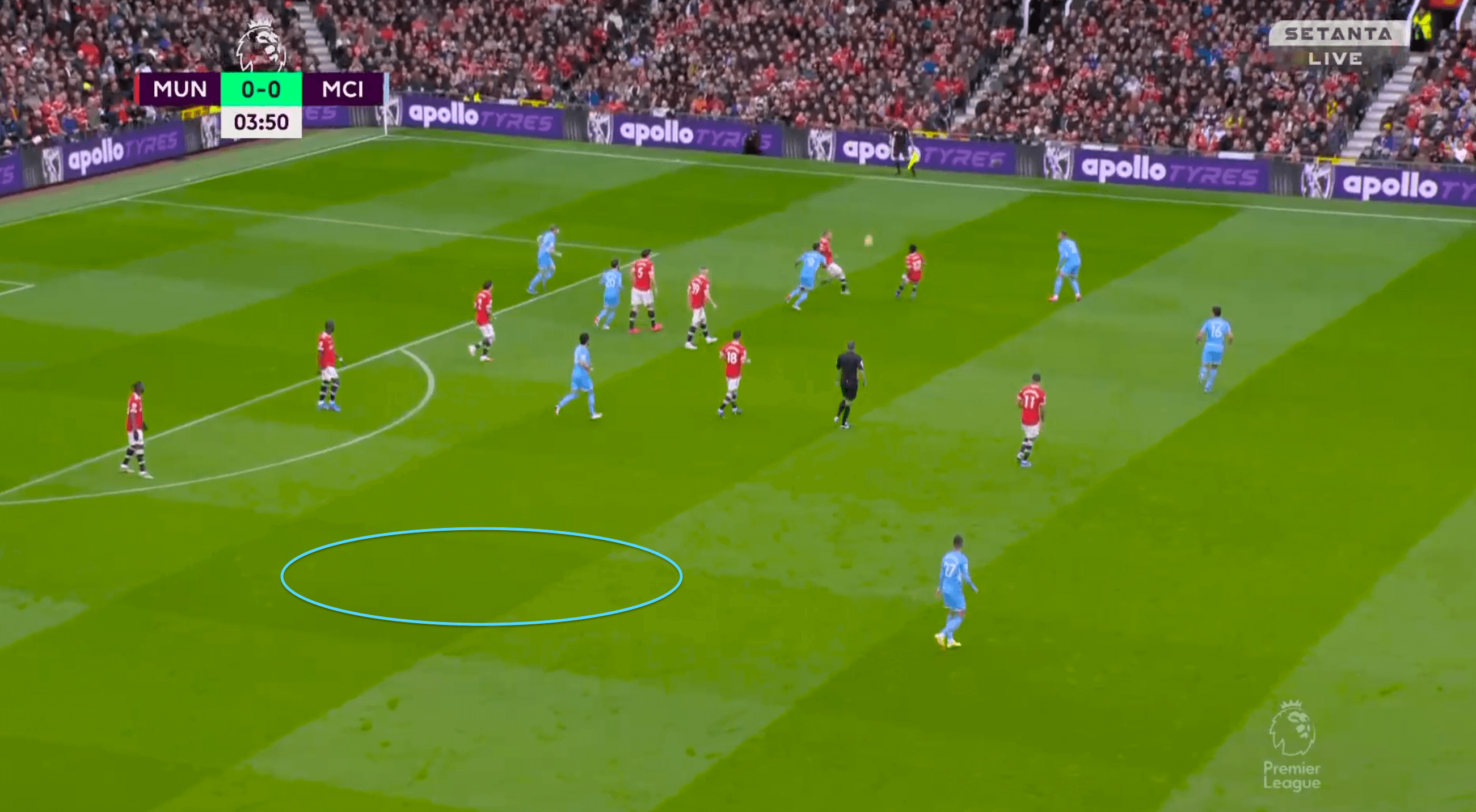 Another example can be seen below where this time City starts to play out from the back on the right side and after entering the 2nd phase they look to switch the ball to the right flank where KDB and Gabriel Jesus have a 2v1 situation against Luke Shaw which puts City in an advantage. This is probably due to the shift of players from one flank to the other since the 3-men midfield have to cover for the lack of winger in the system, when they move across the space opens on the opposite side. 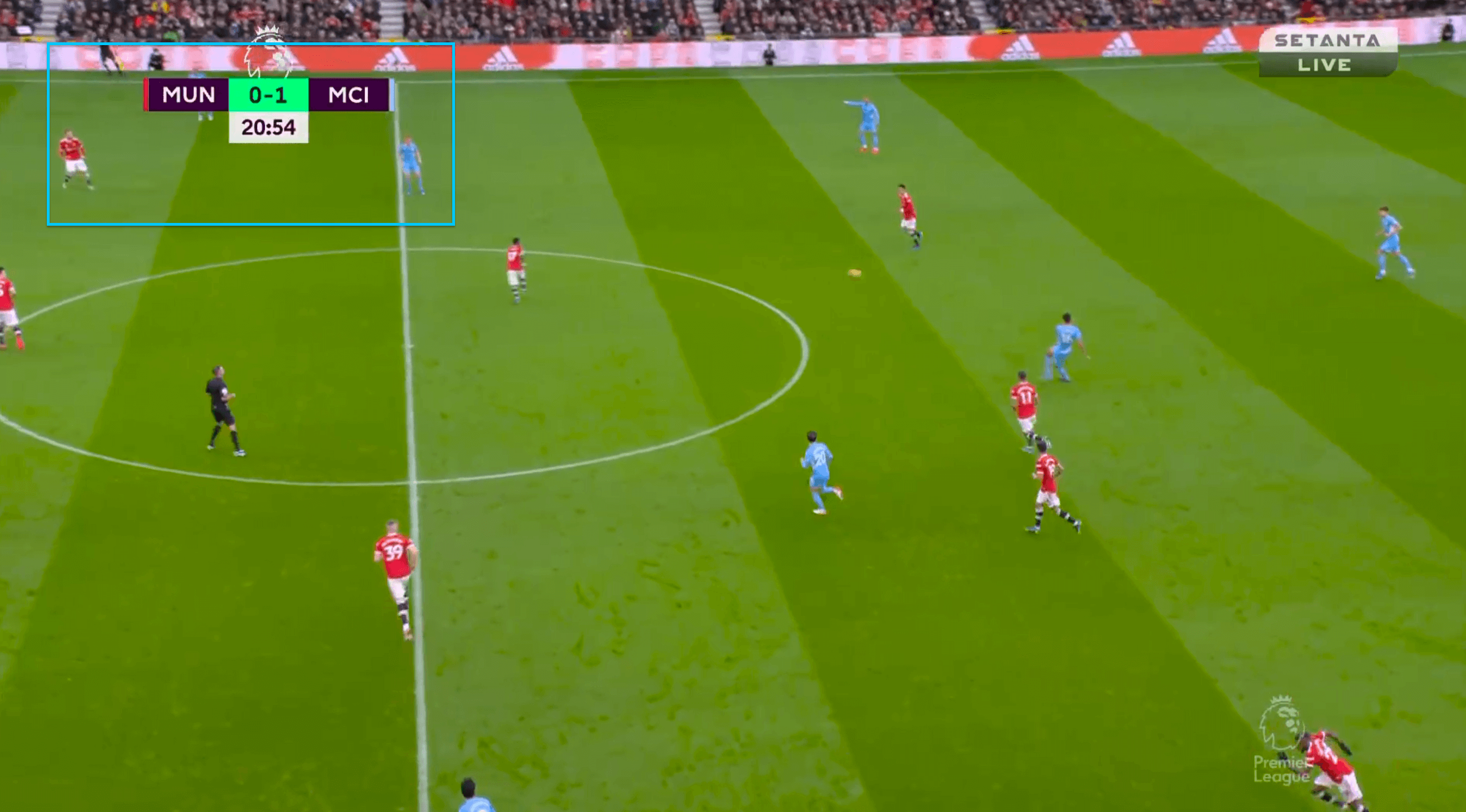 This was proper homework from the Pep’s men as they knew the issues United could pose with their new formation especially with the results that Ole’s men have had against them in the past. The main issue arose from lack of press from the wing-back which should have been prioritized once City took the lead. The problem to have the midfielders cover for the lack of wide players pressing up is that it would eventually open spaces in the centre which again should be covered by the other player where he moves to that side. This domino effect is what creates the vacant half-space.

We can see Fred pressing higher up in the image below as Luke Shaw is deeper. This means that United have to shift wide with their midfielders and Mctominay is now dragged towards the wide regions as a result. This means that Gundogan can now drop into the space and a passing lane is also open to him for KDB. 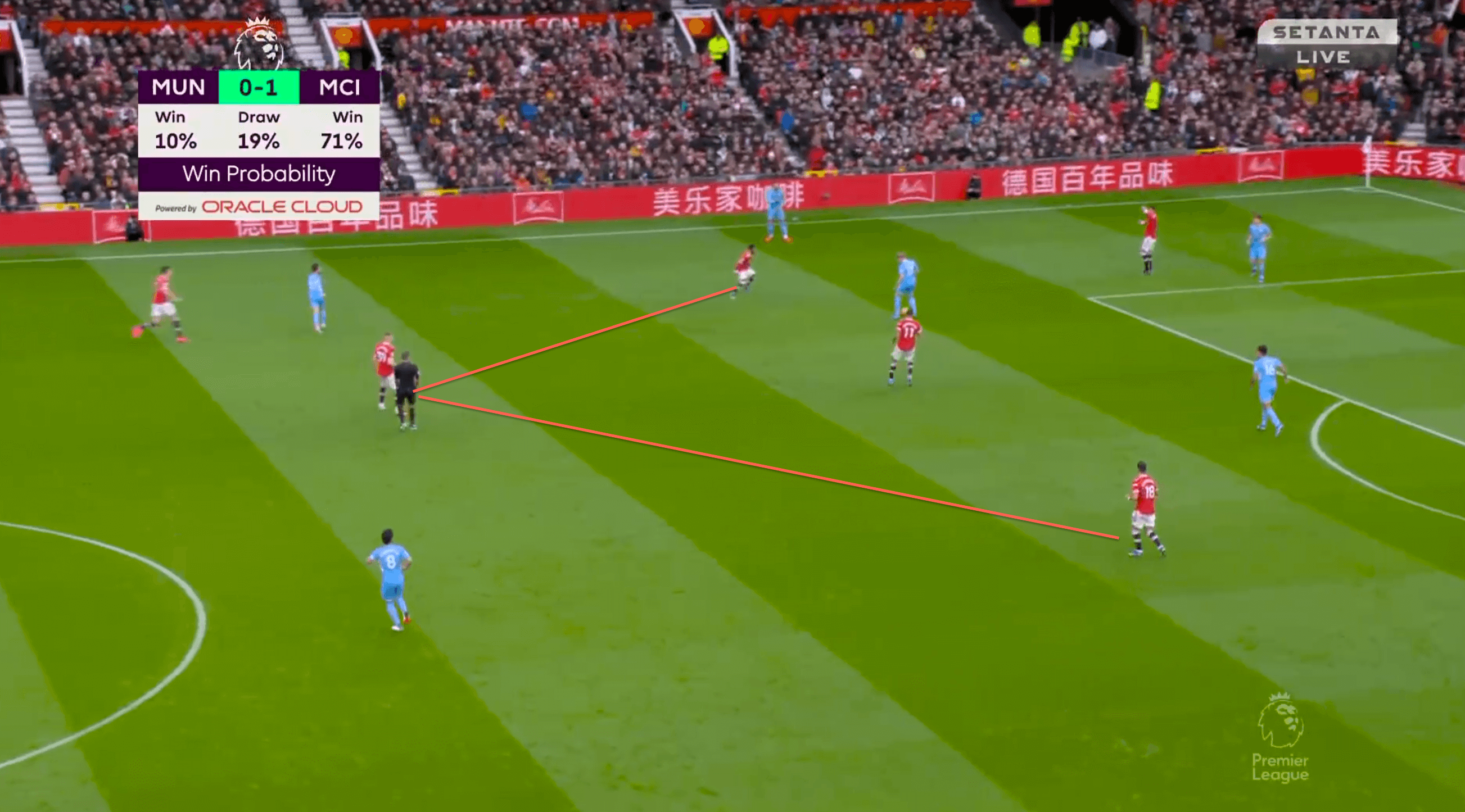 This shifting across was a very strenuous task for the United midfielders especially McTominay in the pivot as both Gundogan and KDB constantly looked to drop deep and show themselves for the ball in the middle-third like in the image below. 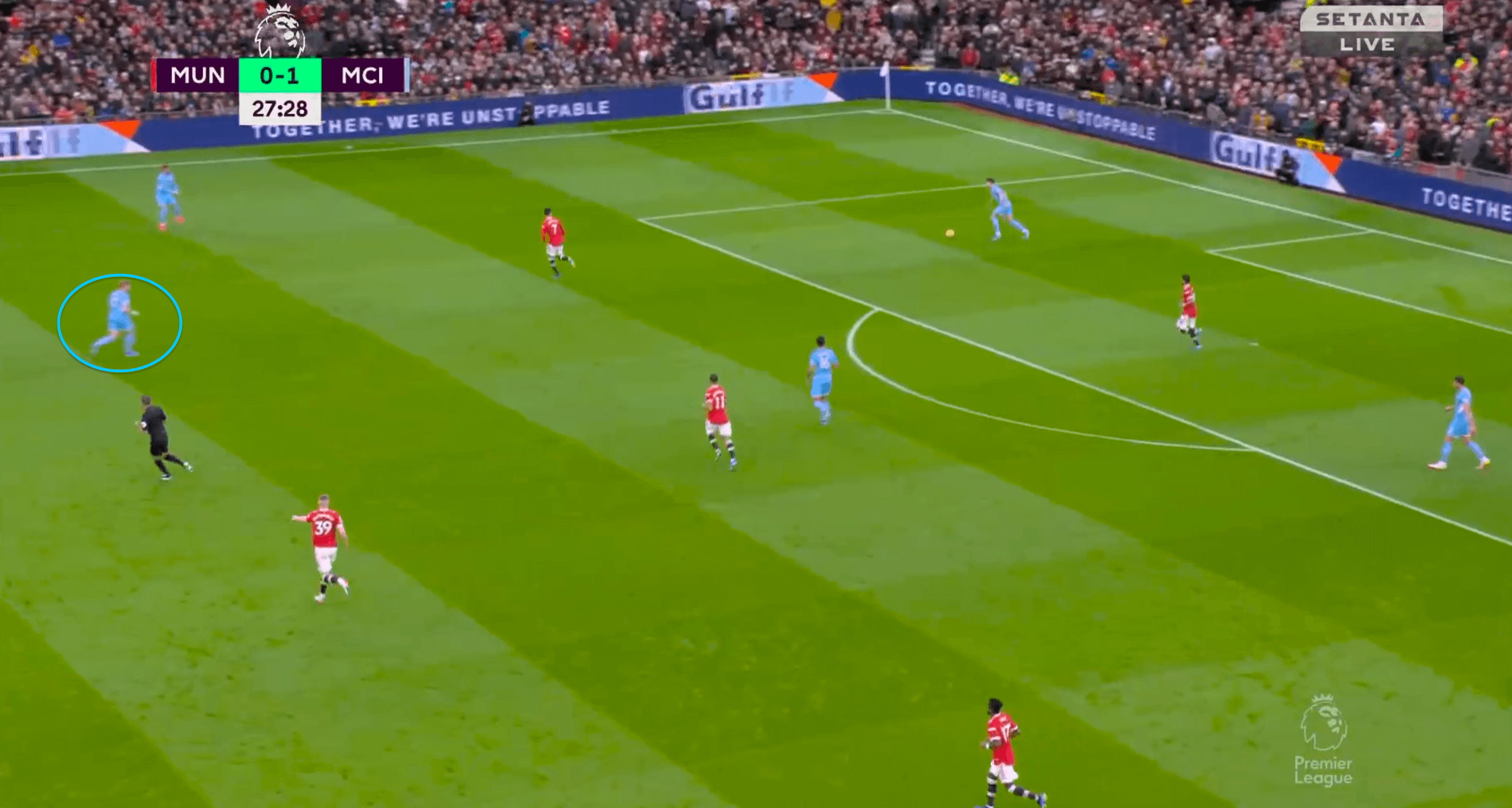 It wasn’t only during switches that City were able to create overloads against the wing-backs in the flanks. Even on the near side, they were able to do it, especially once United conceded. Having to chase from behind, the United players resorted to intense press and now the wing-backs pressed the City full-backs. This opened up space for the run for any of the City players as they made runs in between the WB and wide CB. We can see Foden making a run like that on the blindside of AWB when he goes out to press Cancelo and Bailly being very narrower means that Gundogan can slide the ball to him. 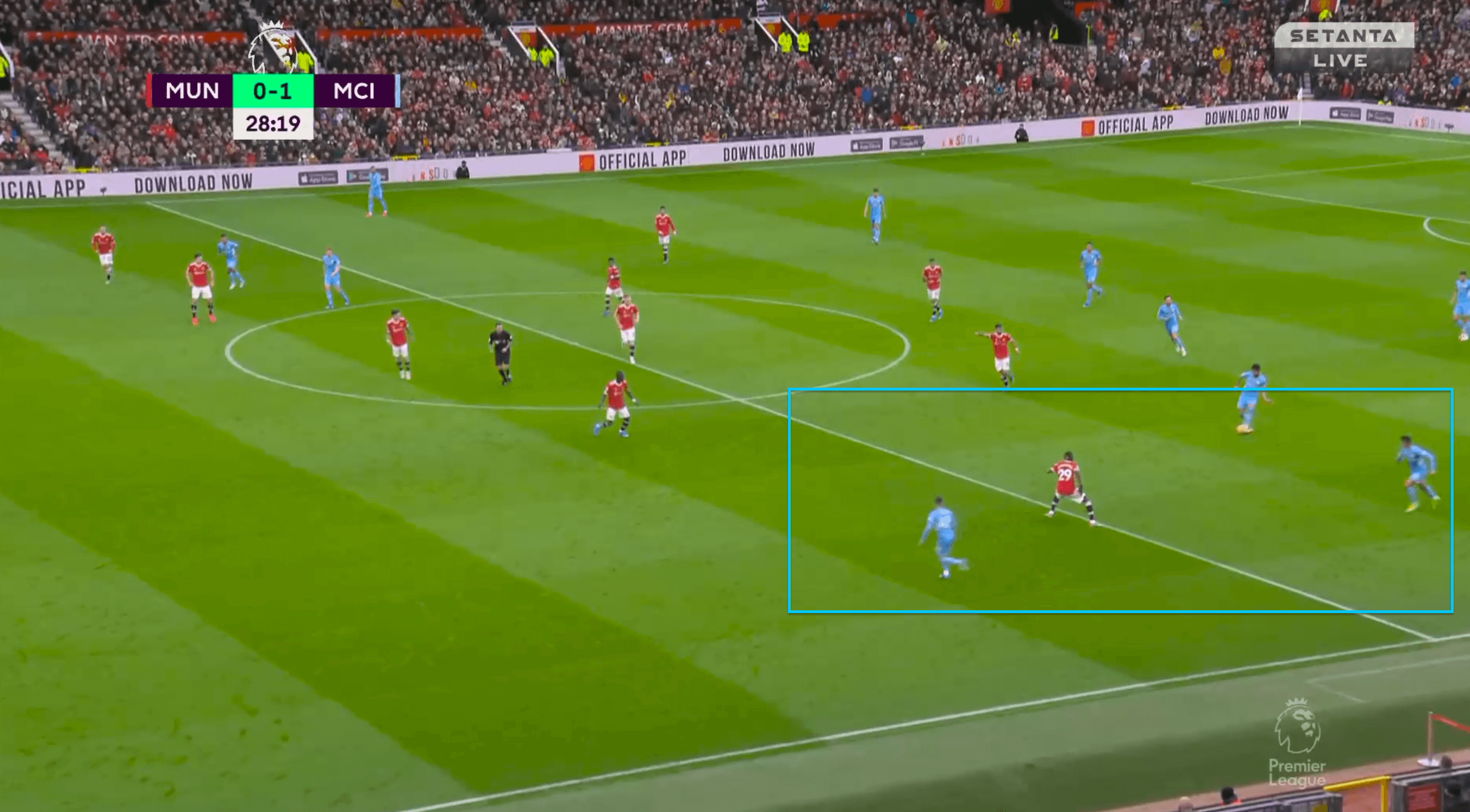 Even without possession City were comfortably able to stop United from playing out from the back easily. They went out in a 4-4-2 pressing shape where the KDB and Silva were the two forward pressing 2 of United’s CB while Baily would slot himself to the RB pushing AWB further. United didn’t look to use this and this allowed City to keep the two pivots on cover-shadow while pressing while the wingers would press the full-backs like in the image below. 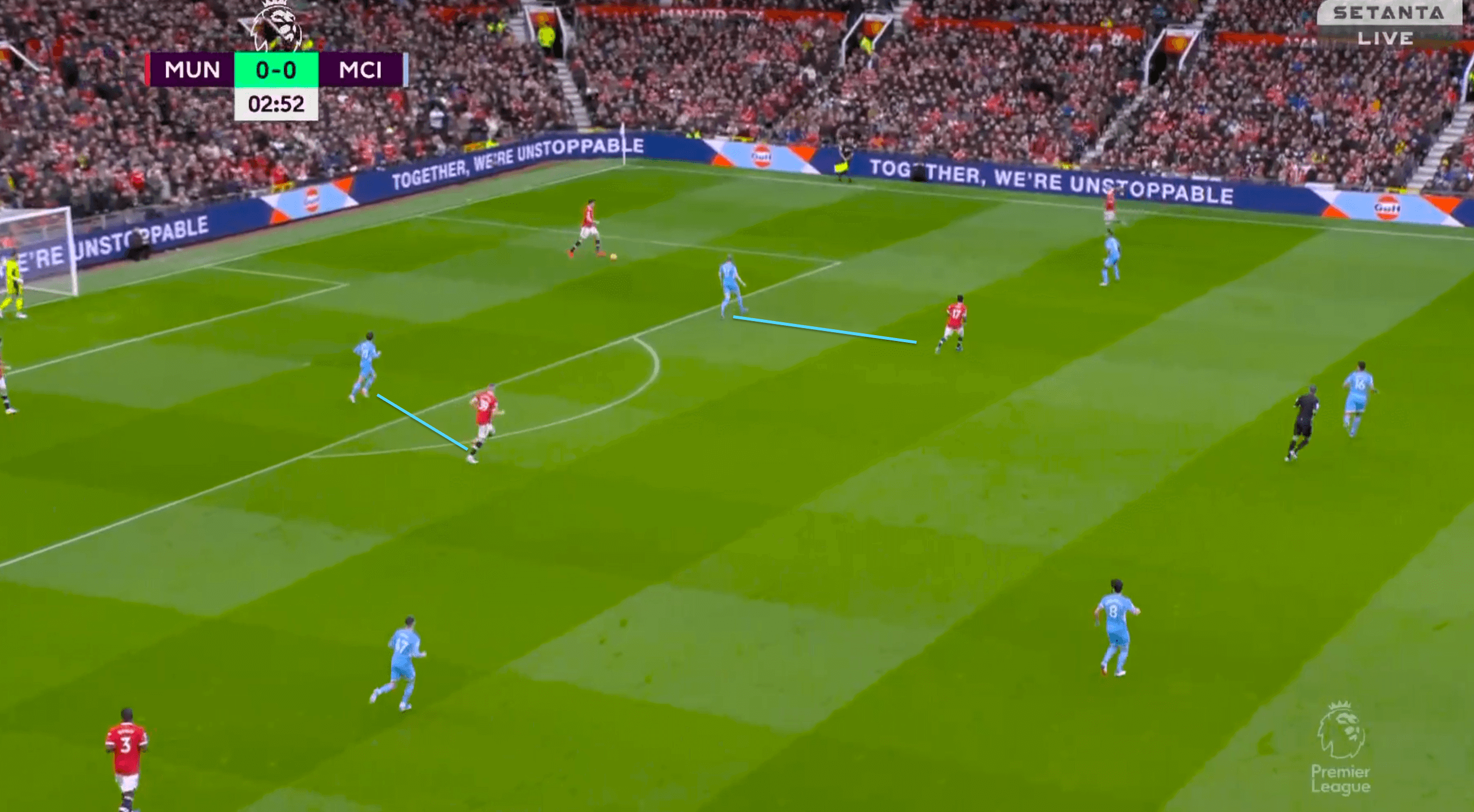 Many things will define Ole’s tenure as a manager but if there is one negative aspect in that it would be the lack of proper structure and system put in play despite being here for almost 3 years. The coaching issues still seem to be persistent and United players despite their individual talents look way off in team combinations, etc.

For example, there were many instances when United decided to play through the City press but didn’t get their basics right where players were oriented in wrong angles or some of them weren’t showing for the ball and that left the ball-carrier with very less options. We can see in the image below, where Mctominay is being left on the cover shadow by Silva while the latter goes to press Maguire, who is having the ball. Mctominay here has to come out of the cover shadow to show himself for a pass and he doesn’t do that leaving Maguire with no potential good options. 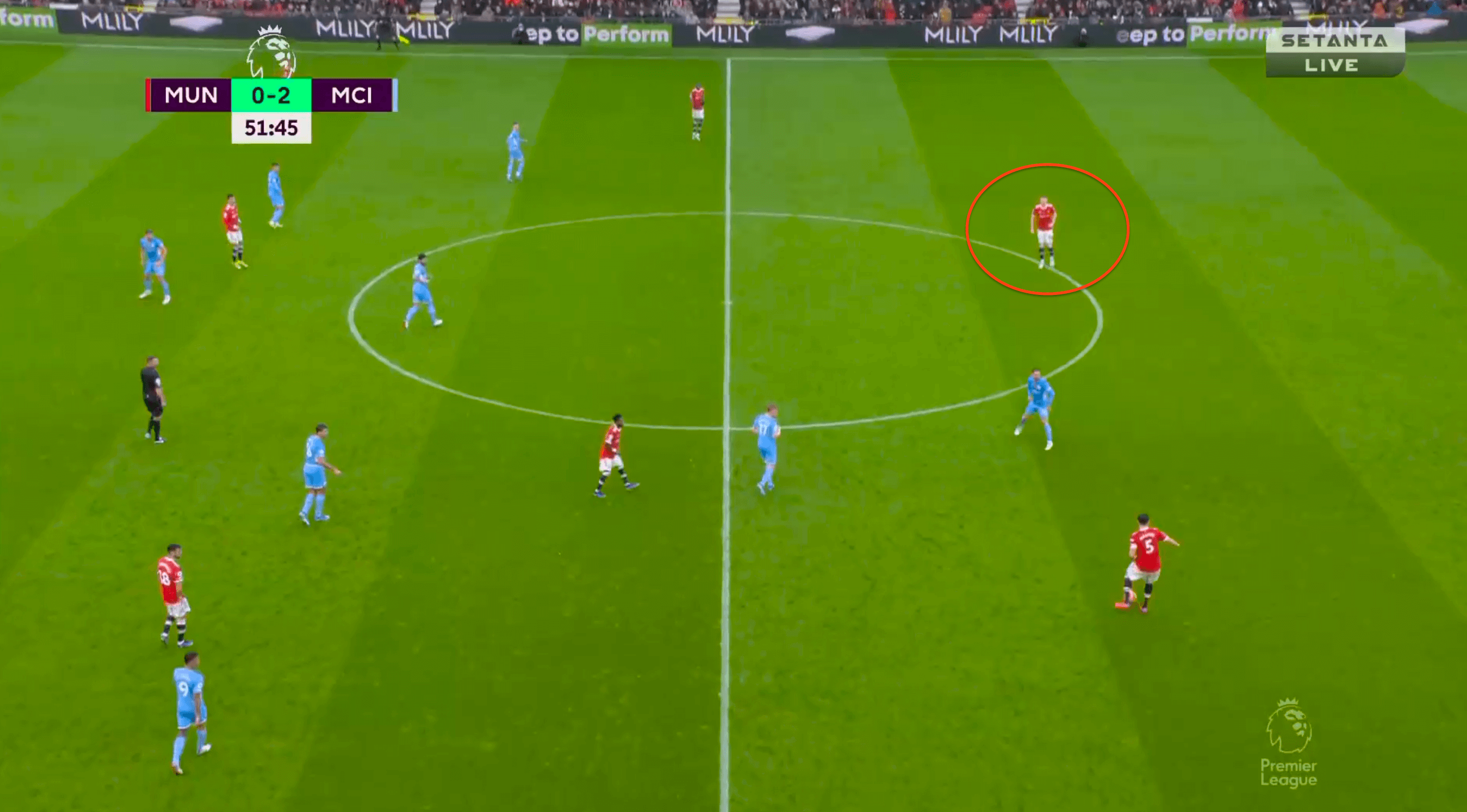 The use of 3-5-2 is amplified only if the wing-backs are given the freedom to push forward and play very high so that the width is supplemented well. But here United didn’t use the width well keeping Shaw very deep and the likes of Ronaldo had to stay wider which means that there is no central presence that can pin the CBs in the middle and drag them with their runs. 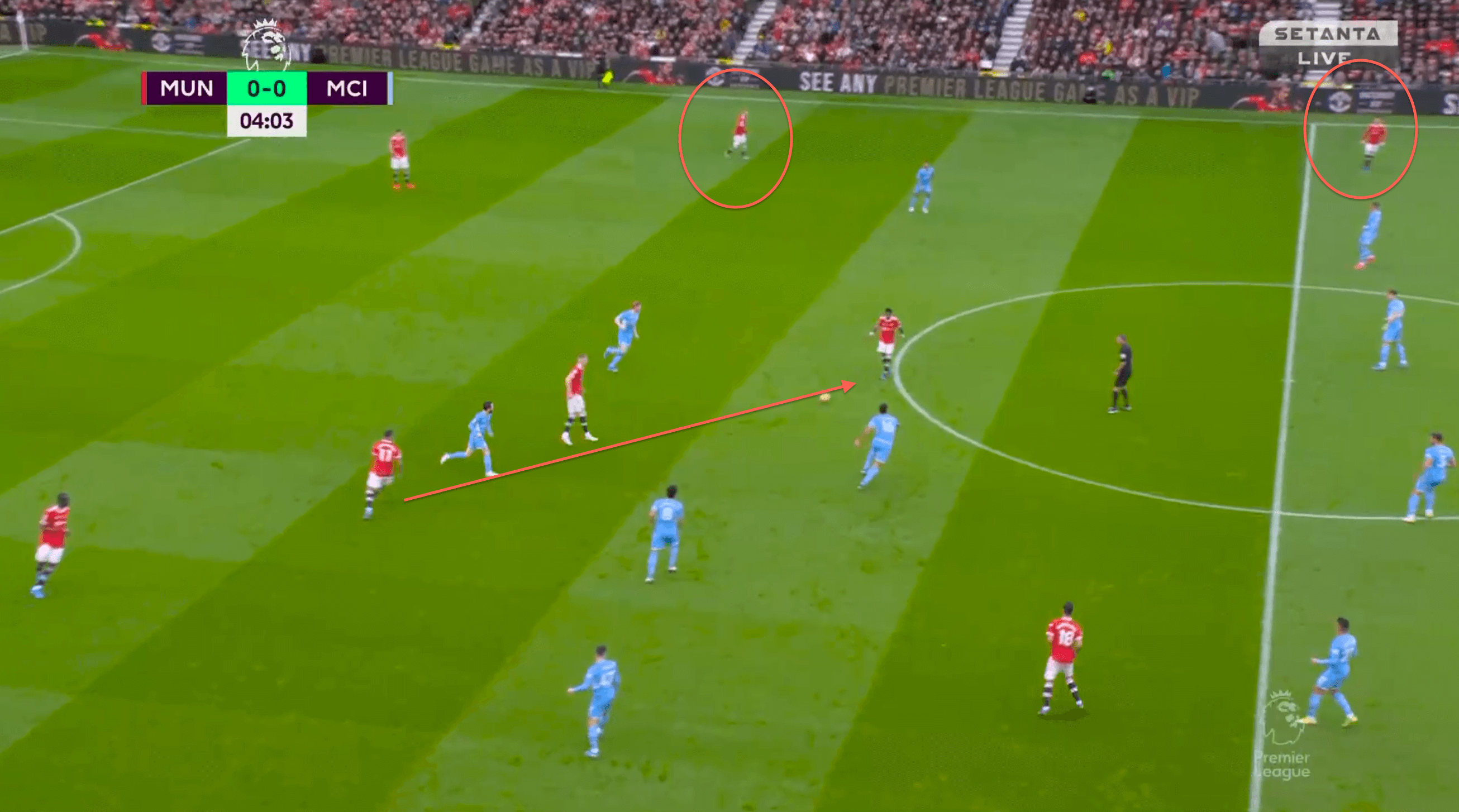 With Ole using Ronaldo and Greenwood as his two-strike options, it gave United one big issue on the ball where both of them are very ball-hogging in their play where they would like to get the ball into their feet. This is where United missed the presence of Edinson Cavani as he is great with his movement off the ball and constantly runs into space that drags the defence always. We can see that in the image below where both Greenwood and Ronaldo are static without making runs especially Greenwood who should be making a run into the space behind so that it could open the lane for Maguire to pass to him or at least drag the player. 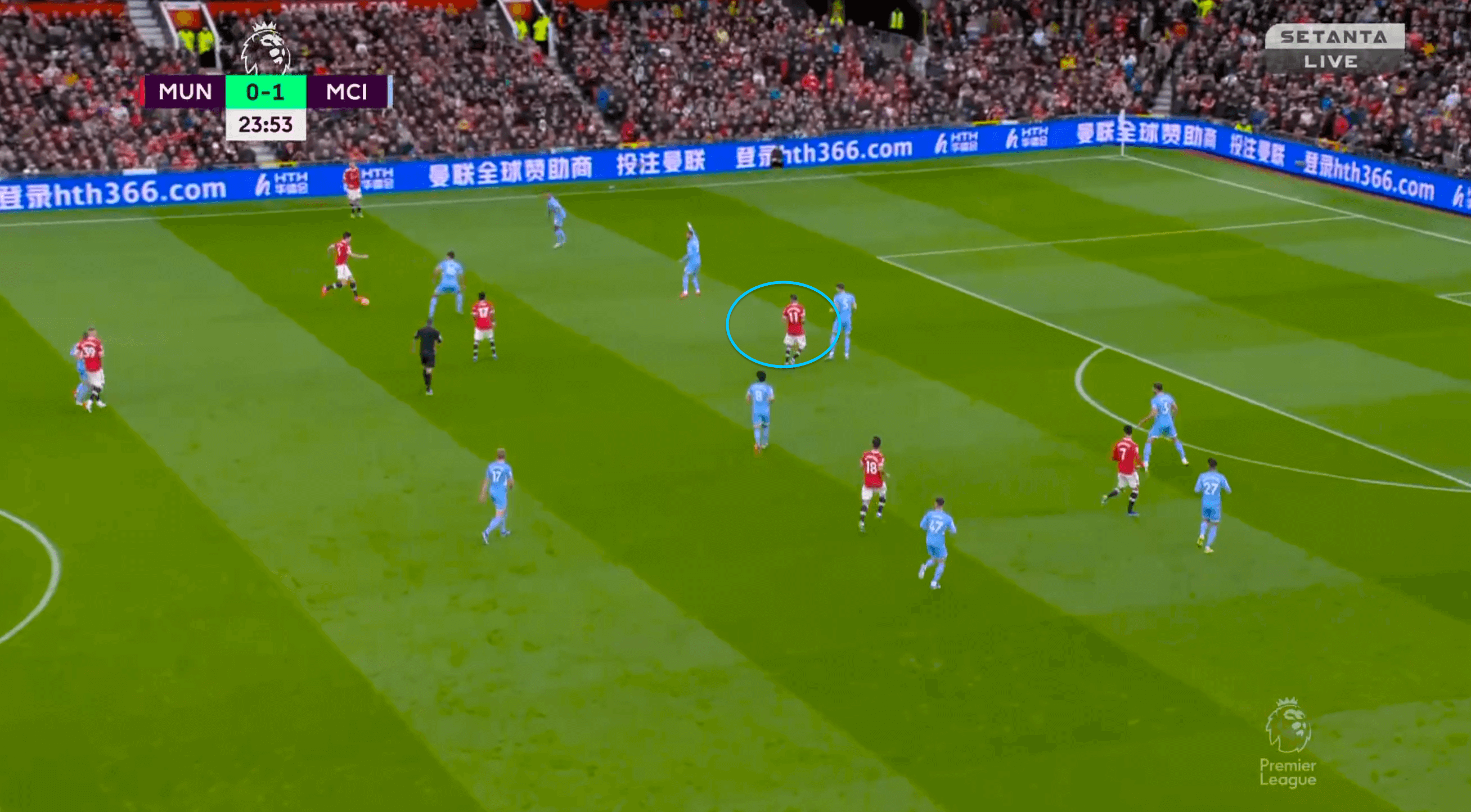 Making runs into spaces is one of the key things in modern football which many top clubs use and emphasize on the majority of its players to do so. Another example can be seen below where AWB is seen having the ball and Fred is in half-space. He has space to run into and that particular zone is very valuable to make runs. But he doesn’t do that which means that AWB does not have an option to pass the ball into. 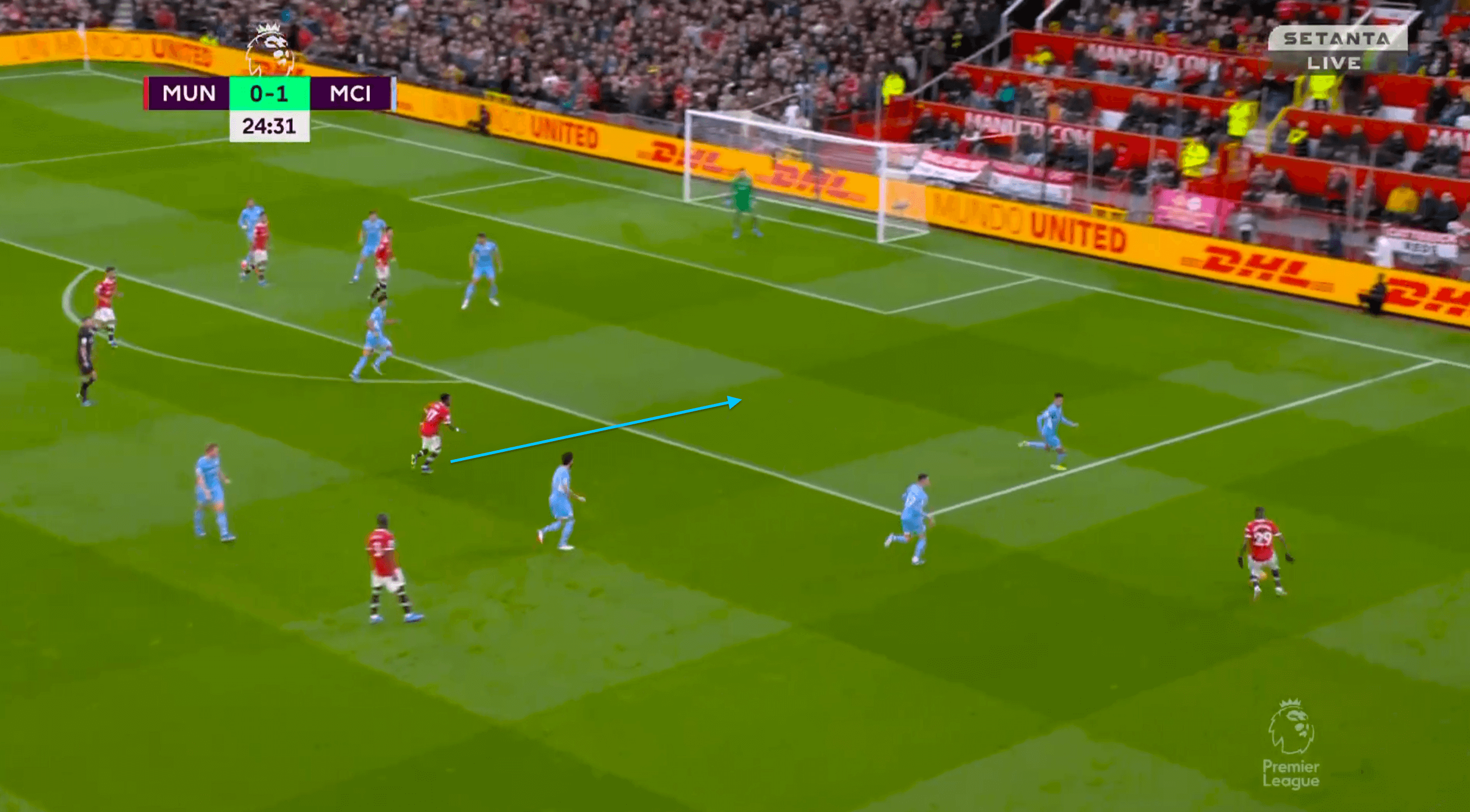 Even during defensive phases, to give more freedom to the forwards during counter-attacks situations, they are left very higher up the pitch which means that they don’t track back efficiently and support their full-backs. We can see an example of Sancho higher-up and doesn’t check or scan his blindside which means that Gundogan can easily make a run and he receives the ball due to this. This is a concurrent issue in many United games where the full-backs are exposed which leads to them being put into numerous unwanted situations throughout. 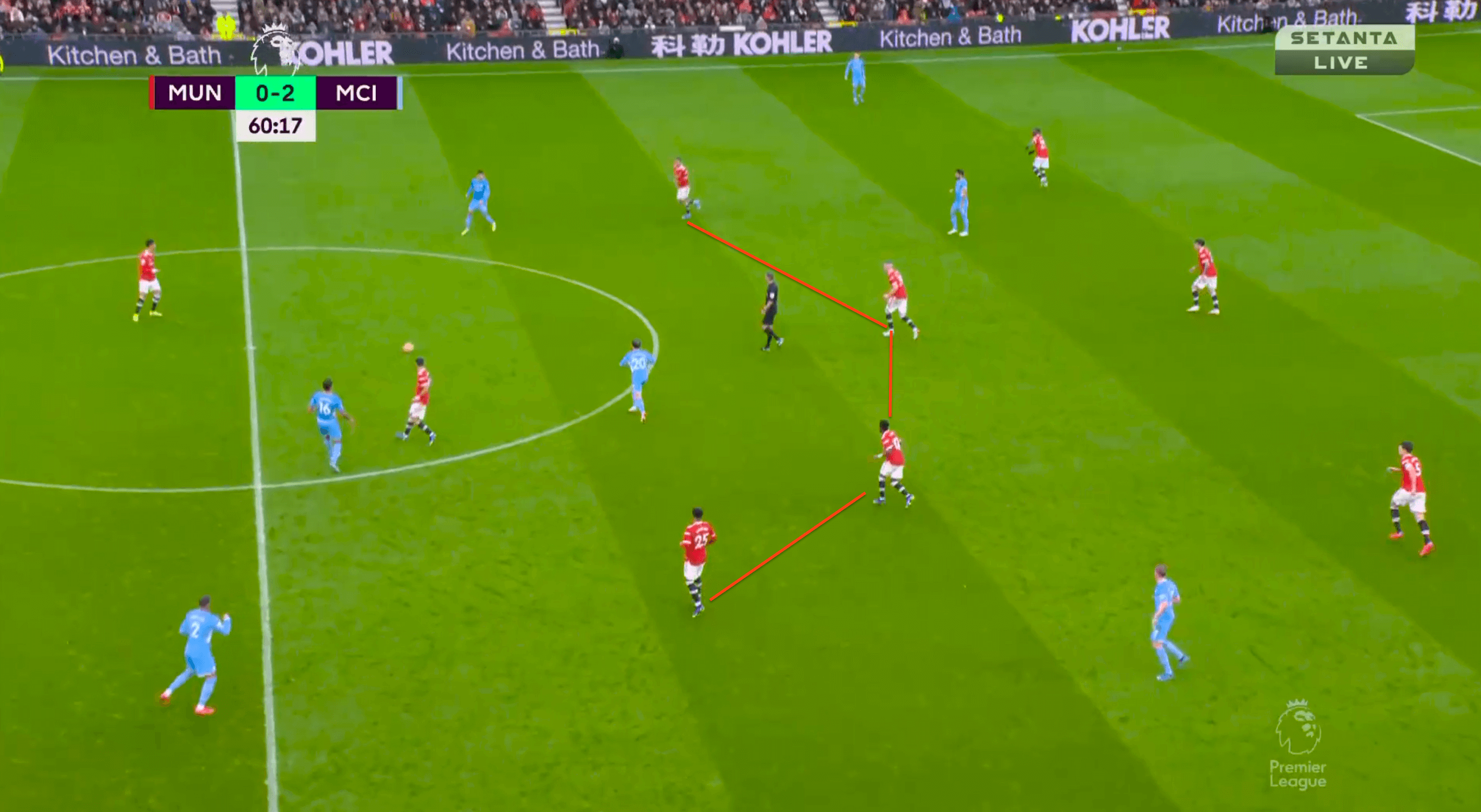 Even when they shifted to a 4-2-3-1 / 4-4-2 like in the image below in the second image the issues were still lingering and United struggled to give a comeback in the game which shows that the basics are fundamentals for every player to play and system and structures must be put in the proper way to facilitate the strengths of the players.

Despite not being in their actual best, Man City were able to get a comfortable win away from home and this tells us more about the issues that United have over their neighbour and how far the quality level is between them and their rivals at the top. City are closing in on the leaders, Chelsea. 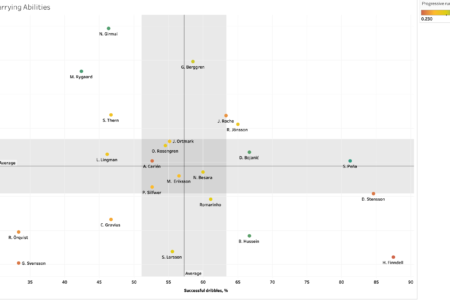