Only four games into the Bundesliga season we experienced our first top of the table clash. RB Leipzig have been the pace-setters in the early weeks, beating Union Berlin, Eintracht Frankfurt and Borussia Mönchengladbach. In doing so they had notched up an impressive nine goals in three games, whilst only conceding twice. Last season’s champions Bayern Munich have started well too. After the disappointment of the opening weekend’s draw to Hertha BSC, they bounced back by beating Schalke and demolishing Mainz 6-1. Through three games they had scored 11 goals and conceded three.

With Borussia Dortmund faltering against Union Berlin in a shock defeat at the end of August, it was the perfect chance for either Leipzig or Bayern to seize the momentum in the early stages of the chase for the Meisterschale.

Bayern took the lead in the third minute through Robert Lewandowski, but Emil Forsberg equalized before half time from the penalty spot. The game would finish 1-1. This tactical analysis examines the tactics used by both Julian Nagelsmann and Niko Kovač as their two sides battled it out at the Red Bull Arena. 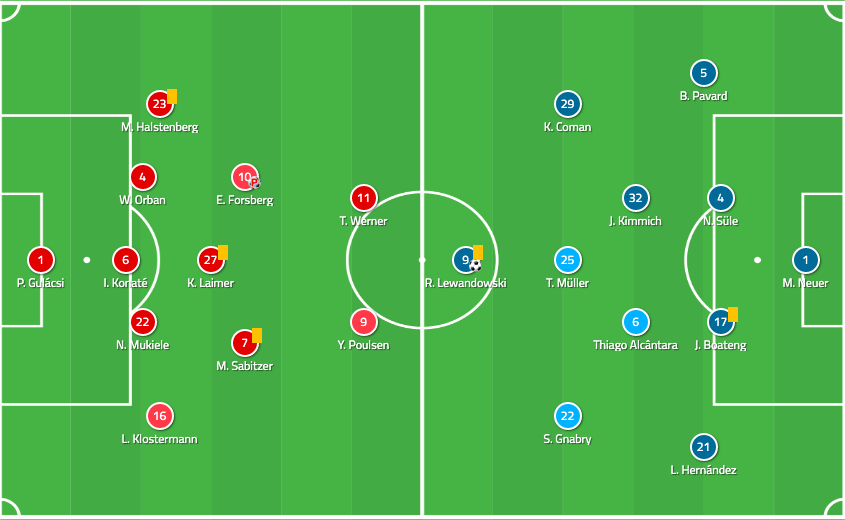 Leipzig began the game in a 5-3-2; a formation they used in their win over Frankfurt. However, in the second half, they reverted to a 4-2-3-1 to mirror Bayern’s 4-2-3-1 formation. Lukas Klostermann made way for centre-midfielder Diego Demme, whilst Nordi Mukiele was pushed to right-back.

Bayern naturally lined up in a more cautious formation than they had against Mainz, where they played a 4-3-3. In this game, they had played with Thiago Alcantara and Philippe Coutinho working as attacking midfielders. Although Alcantara kept his place, he was used in a deeper role. Coutinho was relegated to the bench.

Leipzig were dominated in possession for the majority of the game by Bayern. The only time Leipzig had more possession was in the first 15 minutes of the second half where they had 53%.

Bayern dominated the entirety of the first half with 77.33% of possession. However, in the second half, this dropped to 58.67%.

Munich looked after the ball far better with an 87.3% pass completion rate compared to Leipzig’s 76.03%, albeit 39.6% of Leipzig’s passes were forwards, compared to Bayern’s 28.4%. This shows how Bayern took a patient approach to their build-up play whereas Leipzig were more direct.

Bayern’s back four completed a total of 134 passes between them, whereas Leipzig completed just over double that amount of passes for the entire game with just 273 completed passes.

Kovač’s side showed a lot of patience in their build-up play, staying in possession of the ball for over 45 seconds on seven occasions throughout the game.

Thiago Alcantara and Joshua Kimmich were the heartbeat of the team with over 39.9% of Bayern’s passes in the game involving the two centre-midfielders. Kovac wanted them on the ball as often as possible and they had license to move as a pair wherever they saw fit to begin orchestrating Bayern’s attacks. 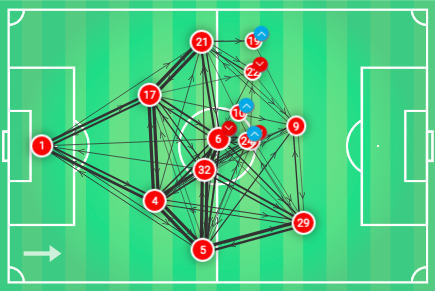 However, despite prolonged possession, they didn’t create more chances. Both teams recorded five shots on target, with Leipzig taking a total of 13 shots, compared to Bayern’s 12. Bayern’s finishing was disappointing too. The placement of their shots demonstrates a clear pattern of shooting at central areas of the Leipzig goal, and other than Lewandowski’s early strike, rarely bothered Leipzig keeper Péter Gulácsi. Although four of these shots on target came from Lewandowski, all of these instances were in the first half. In the second half, a resurgent Leipzig restricted them to just one shot on target.

There were definite contrasts in pressing styles between both sides, with Leipzig allowing Bayern more time on the ball and focusing on keeping a sturdy defensive shape, particularly in the first half. Bayern looked to press high, and their passes per defensive action was just 6.7 throughout the entire game as the below analysis shows. In the first half, they created several chances through winning the ball back in Leipzig’s defensive third. 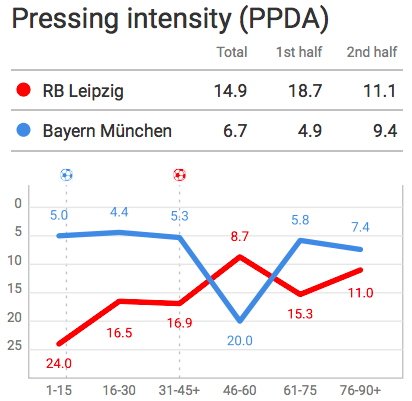 Regardless of their pressing differences, Leipzig still looked for the chance to catch Bayern cold in the first half, who perhaps took the time they had to build from the back for granted. Two of Leipzig’s three shots in the first half came from winning the ball back in high areas.

In the first half, two of Leipzig’s three shots from open play came by winning the ball back in a high area.

Unlike Bayern who focused their attacks down the right, Leipzig were balanced in where they launched attacks from. However, due to Coman’s high positioning, Pavard was left relatively exposed, and Leipzig enjoyed more threatening attacks from their own left-flank, as the image below shows.

They attacked in numbers, but also stayed narrow to allow space for their wing-backs to provide the width in attack. Despite changing to a back four in the second half, Nagelsmann still wanted Forsberg and Marcel Sabitzer to operate in the half-spaces. Therefore the full-backs were expected to get forward and support the attacks in wide areas.

They also stayed narrow in an attempt to encourage the Bayern defence to press the ball-carrier. In doing so one of their attacking players, most likely Yussuf Poulsen or Timo Werner would be able to slip into the space vacated by the pressing defender. However, Bayern had a plan to deal with this. 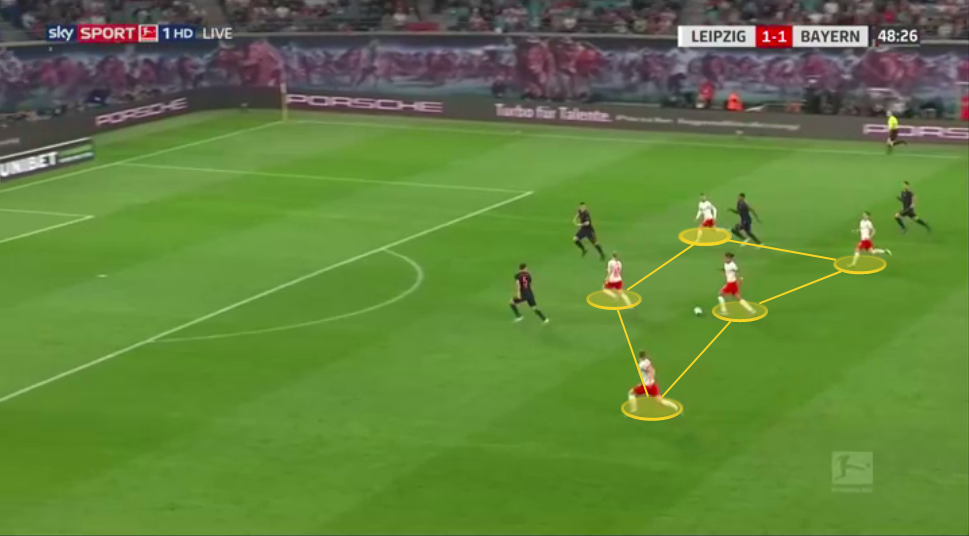 Munich’s defensive shape and their plan to deal with Werner

Werner is incredibly effective at capitalizing on poor defensive positioning and having space to run into behind the back four. Kovač ensured his defence nullified this threat by staying compact and dropping deep as Leipzig came forward with the ball.

Kimmich would drop very deep so the centre-backs didn’t need to press the attacking player, but rather could hold their shape.

By dropping deeper, Kimmich allowed the back four to continue to drop and reduce the space in behind them from which Werner could run into. It worked well and although Werner had six shots, he only hit the target on two occasions. This was incredibly important as leading up to this game, Werner had scored over half of Leipzig’s league goals this season.

Three of his shots came from outside the box, and none of his shots were in particularly dangerous areas, with an average xG per shot of 0.06. Before this game, he had only taken two shots outside of the box this season.

As mentioned earlier, Bayern pressed Leipzig and prevented them from having sustained periods of possession. As Leipzig looked to play out from the back, Bayern looked to close down Leipzig’s passing lanes. 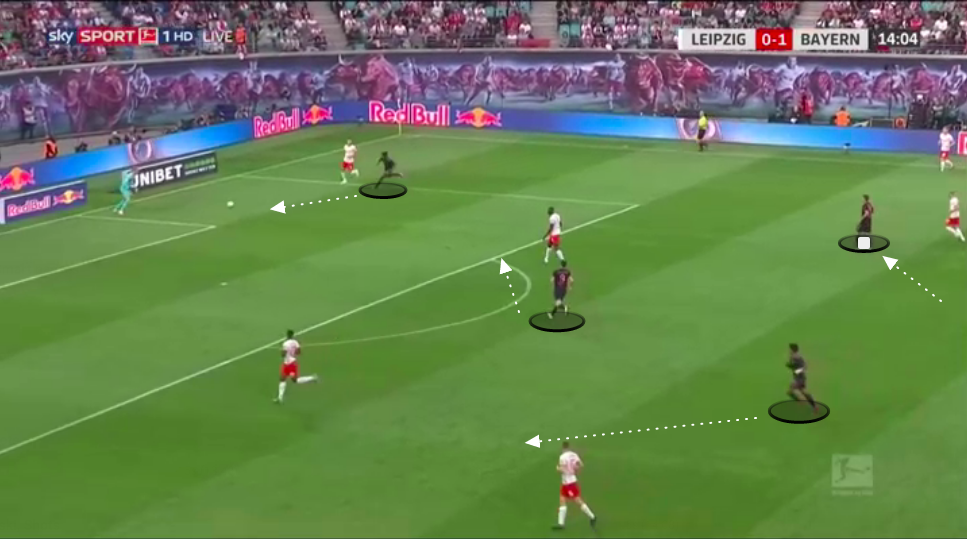 As Leipzig advanced further up the field, Bayern would change from a 4-2-3-1 to a 4-4-2 to press. They stayed narrow and looked to prevent Forsberg and Sabitzer from receiving the ball in the half-spaces. Their shape also kept them compact and meant there was less space behind the back four for Werner to use.

What is noticeable when analysing Leipzig’s pass map is the lack of passes from the back four into the centre of the midfield. This is heavily down to Bayern’s narrow defensive shape, as well as their success in winning the ball back in higher areas before Leipzig’s midfield were able to get hold of possession.

Attacking down the right-flank with Coman

Bayern based the majority of their attacks down the right flank, with 67% of their attacks coming through this side. Coman was the figurehead of these attacks, completing 11 of his 19 attempted dribbles on the day. Munich looked to isolate him as much as possible against Halstenberg, however, Leipzig did well to restrict him to a 33% cross completion rate from his nine crosses. 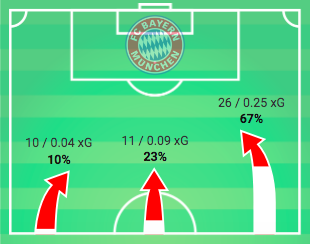 Coman was far from predictable in his attacking movements and wasn’t just a one-trick pony looking to take on Halstenberg at every opportunity. He varied his positioning from playing in the half-spaces to playing on the shoulder of the full-back and looking for the through ball. At times he even looked to cut inside and play as a playmaker from the middle of the pitch.

Over half of Bayern’s crosses came from the French winger, and Bayern’s cross-map for the entire game shows this was not a coincidence but a clear plan of attack.

Despite Bayern enjoying the majority of possession, it was an even game. In fact, despite Werner’s quiet afternoon, Leipzig had the better chances and had Manuel Neuer not made a wonderful reflex save from Sabitzer’s long-range shot, Leipzig would have been going home with all three points.

It is a result that neither side will necessarily be pleased with, but they both won’t be too upset with a point. With Dortmund dispatching Bayer Leverkusen 4-0, both Leipzig and Bayern will be well aware of the threat posed by them. Should it be a three-horse race, Leipzig and Bayern drawing against one another could cost them at the end of the season, should they come short against Dortmund themselves.