Rooney so far at Derby – any improvements or signs?

There was no major surprise when Phillip Cocu was dismissed by Derby County after a poor start to the season, with many fans being disappointed such a highly regarded manager could not shape this team into potential promotion challengers. With Derby on the verge of a major £60million takeover by Sheikh Khaled bin Zayed Al Nehayan, Derby turned to an interim appointment to get them through this period and ideally, out of the relegation places. Whilst it was known Wayne Rooney was eager on a move into coaching, no one could have anticipated how quickly he has jumped into this part of his career, and it seems to be, this is a relatively permanent move. But will this permanent move be in permanent charge of Derby, under the new ownership?

Rooney has started off his term in charge in solid form, unbeaten in his six games in sole charge and keeping four clean sheets, showing a decent improvement in performances and form whilst implementing his new philosophy. Despite this, Derby still find themselves in the relegation places, showing the struggles they faced under Cocu this season. Rooney has decided to not include himself in the squad when managing, seeing playing as a distraction from his management role. He is keen to move into management and sees this as the perfect opportunity to do so. Rooney feels the performances so far have justified his interim position and justified his credentials as the permanent manager.

In this tactical analysis, we will be looking at Rooney’s interim spell in charge of Derby so far, with the side showing signs of improvement and an upturn in form in his six games in charge. We will look to analyse through these six games what tactics Rooney has implemented, how successful these changes are and whether these changes are beneficial to Derby in the short and long term.

Derby have a recent history with hiring from the ‘golden’ age of English footballers, with Frank Lampard’s sole season in charge in 2018-19, before taking charge of Chelsea. It is tempting for those in charge of Derby currently to continue this trend following a relatively successful season under Lampard by hiring Wayne Rooney into the role, but will the new owners see it the same way?

Under Cocu, Derby continued to develop exciting, young talent, and this trend has continued under Rooney’s tutelage, particularly as he has decided not to play himself during his spell in interim charge. Rooney has typically picked the same core spine of his team in order to stabilise, solidify and control the centre of the field. He has typically picked Marshall in goal, with Matthew Clarke and Andre Wisdom at centre back (and Curtis Davies prior to his injury), with Krystian Bielik in a holding midfield role and Colin Kazim-Richards being preferred up top. 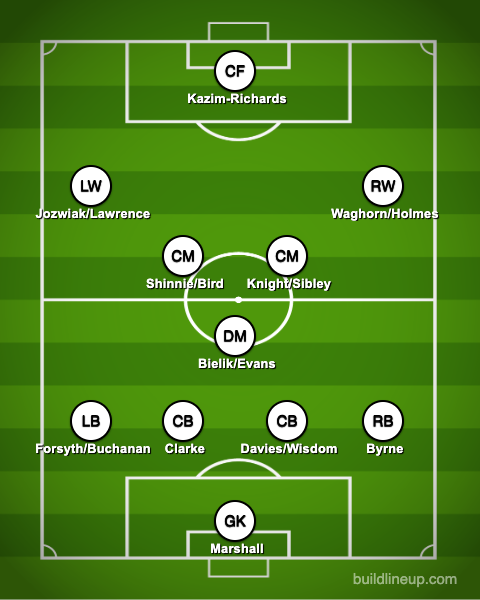 Graeme Shinnie has also featured frequently in a preferred 4-2-3-1, although in the last game against Swansea, we saw a shift to a 4-3-3 to great success. Rooney has looked to blend youth with experience, using the experienced Craig Forsyth frequently on the left in rotation with Lee Buchanan. He has also used the energy and tenacity of players such as Louie Sibley, Max Bird and Jason Knight, with Knight being key to their win against Millwall.

This change to a 4-3-3 against Swansea was a key turning point for Rooney’s side. Whilst his team were becoming more solid at the back, they were still struggling to find the net, registering consecutive 0-0 draws against Brentford and Stoke. Derby have been showing clear progression on a defensive front, but the match against Swansea was a turning point and a sign of real progression due to their attacking prowess in this game.

This balance of youth and experience in this current transition period for Derby is vital. Youth brings energy, commitment and something fresh, raw and new. Experience gets them through a rough patch and out of a rut through composed performances, a tactical understanding and aggressiveness to turn things around. This blend of qualities is vital to increasing Derby’s confidence and form. This aggressiveness is also a vital component of Rooney’s style of play, on the pitch, but also in management.

Rooney’s outlined recently a focus on an aggressive and committed approach, learned during his days under the tutelage of Sir Alex Ferguson. He expects commitment from all of his players on and off the ball, in defence and attack. He has looked however, to prioritise, focusing on their leaky early season defence, looking to fix this problem before their attacking issues. He has re-organised and simplified their defensive play, asking his defenders to sit back, be confident in defence and not allow the opposition any space in and around the box. This is evidenced in their most recent game against Swansea, who didn’t muster a single shot on target in the second half of their game.

In the below figure, we can see this clearly, with Derby collecting up eight first team players in their own box, in comparison to Swansea’s five, in order to shore up in the second half having taken a 2-0 lead. 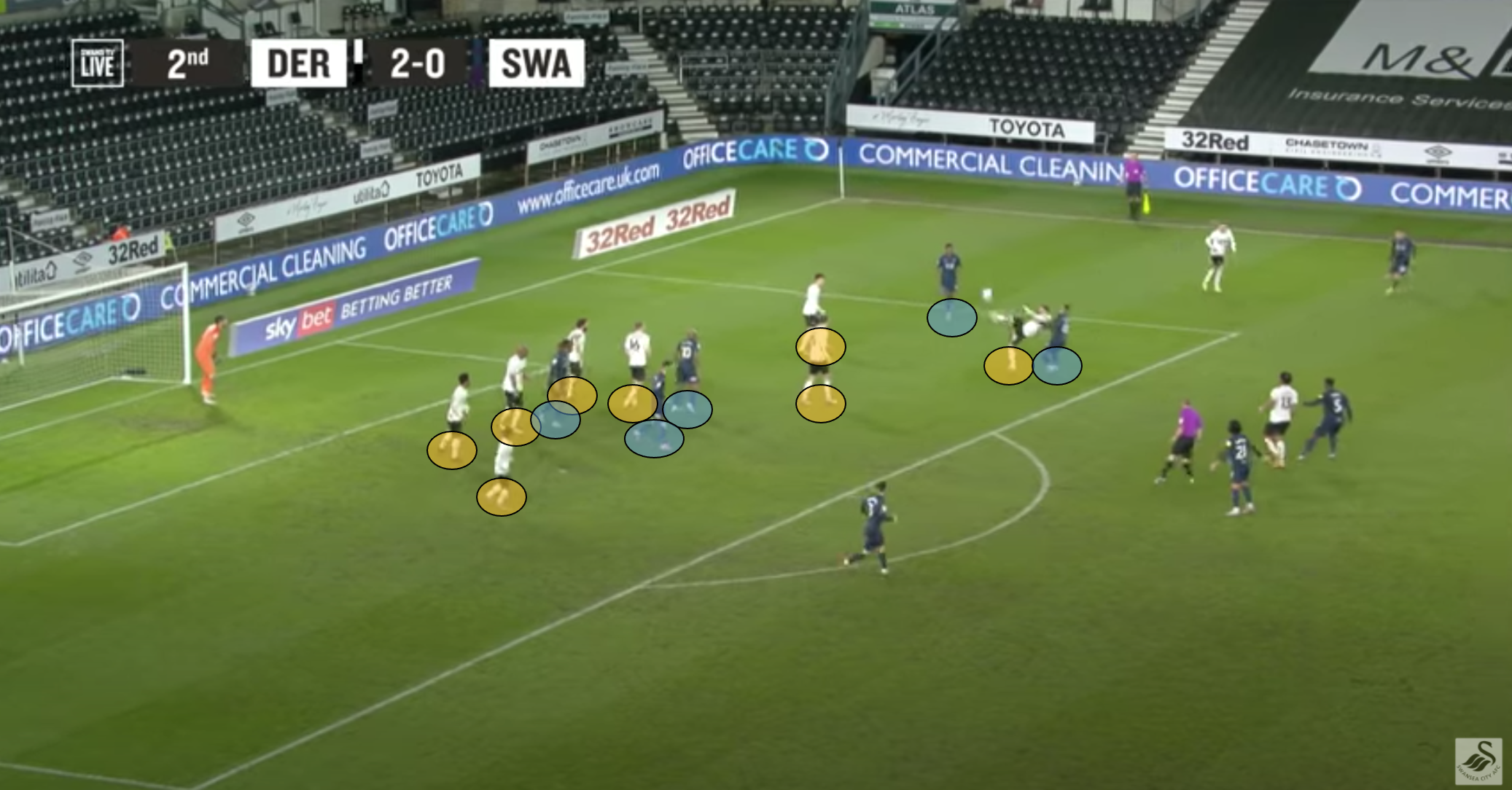 A key component to Rooney and his fellow coaches, Liam Rosenior and Shay Given, style of play has been, as previously mentioned, their use of youth and experience blending together nicely to incite different all-round performances. Jason Knight has brought them energy and commitment to their play, driving their creative play, whilst Shinnie has brought his expertise in the background play, in his ball-winning and ball-playing work. Krystian Bielik’s composure and calmness on the ball has helped Derby control the run of play better, his return from a long-term injury could not have come at a more perfect time for Rooney and was an option that Cocu dearly missed. In the below figures, we can see this increased pressing and commitment from his Derby side, with Waghorn, in particular, helping direct this play, pointing out a play to man-mark and cover to thwart an opposition attack. 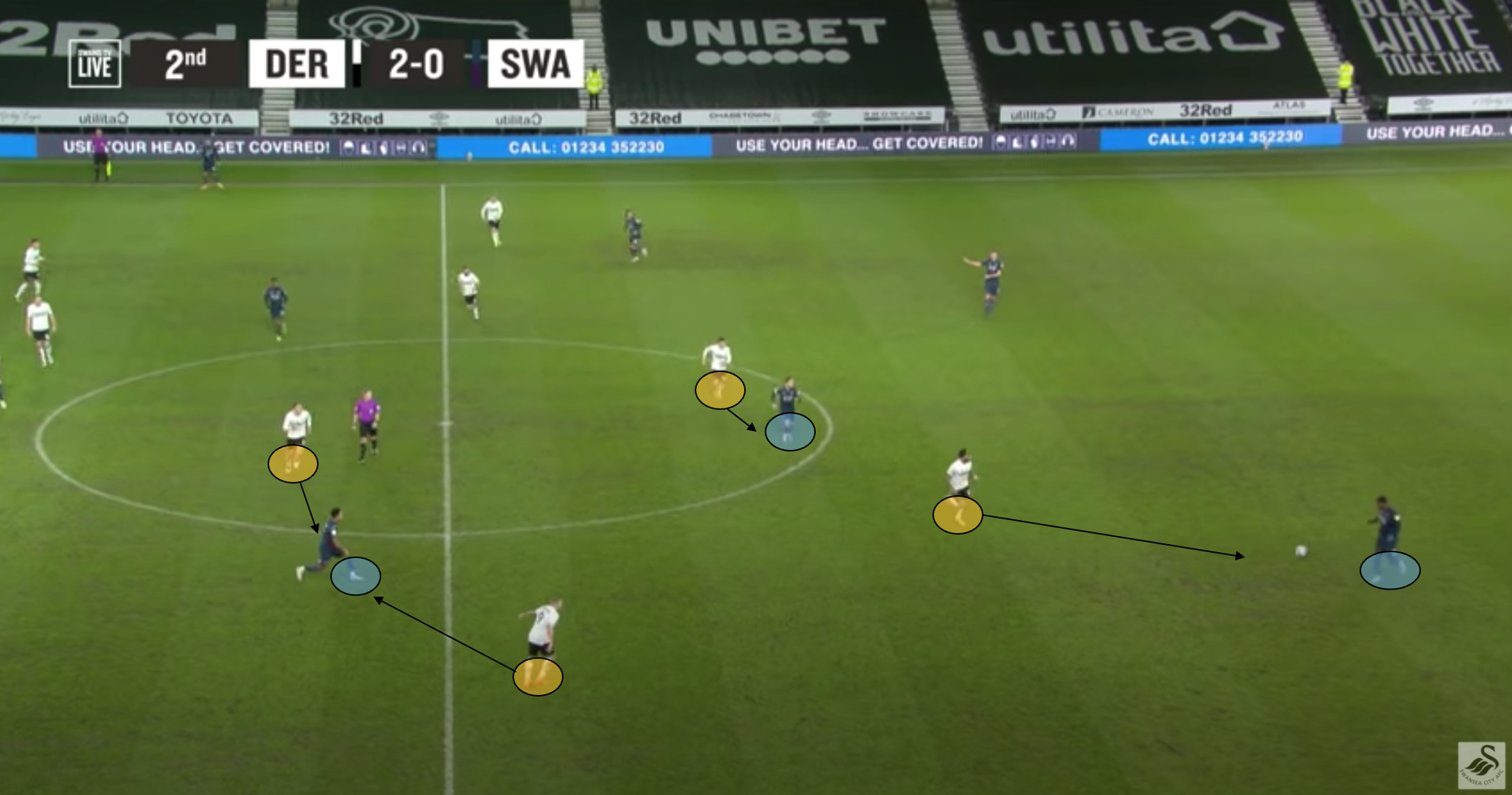 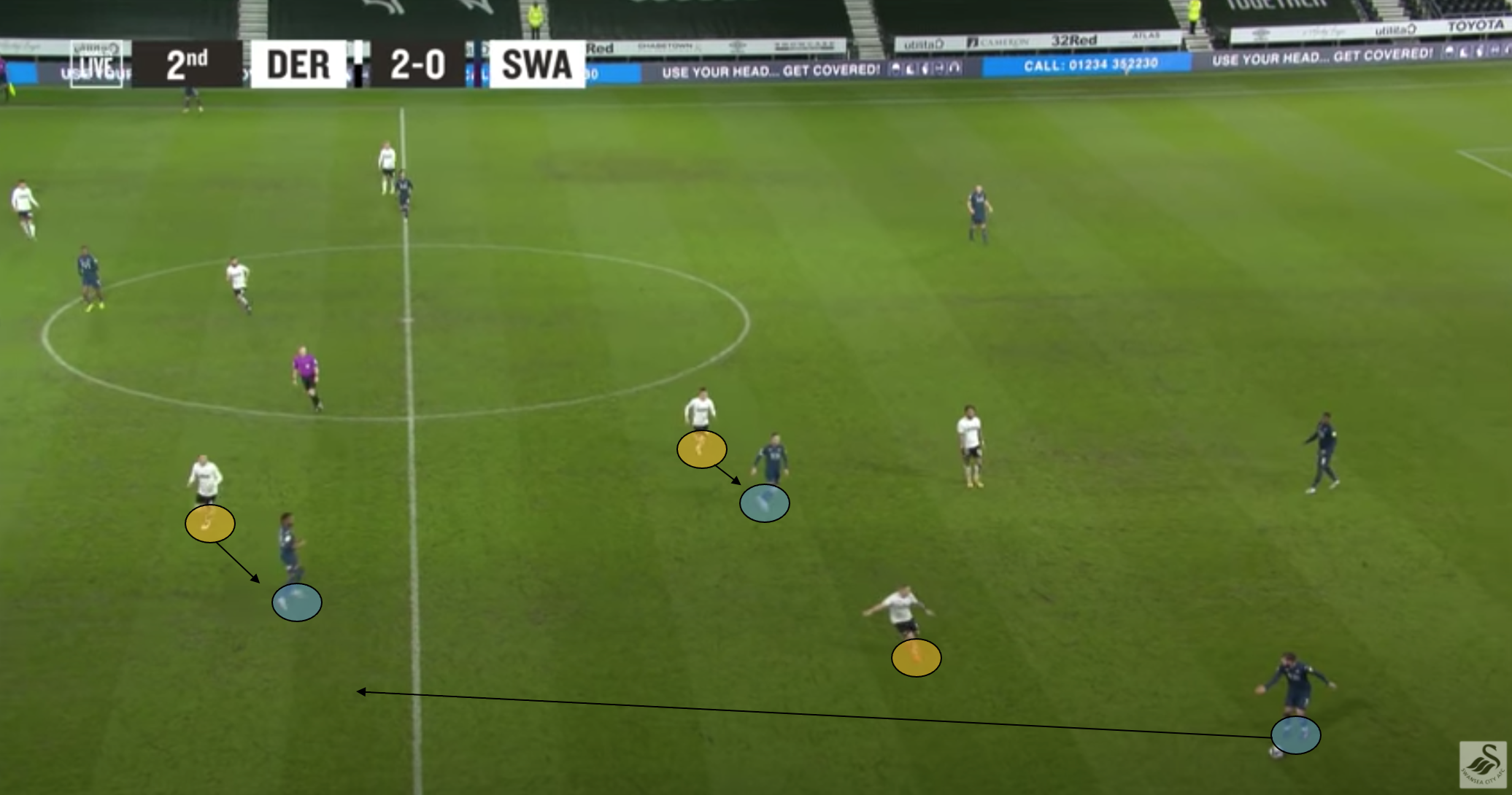 Another key tactical decision made by Rooney is the decision to focus their attacking play on Colin Kazim-Richards, a strong, physically aggressive striker, much in the mould of Rooney himself in his heyday. Richards’ experience could make him vital to Rooney’s system, although it is known Rooney is already looking ahead to the January window for further attacking options if he is the one making the decisions in January that is. In the below figure, we see Kazim-Richards fight for the loose ball, using his aggression to get in front of the Swansea defender, eventually leading to a tidy finish and a 1-0 lead. 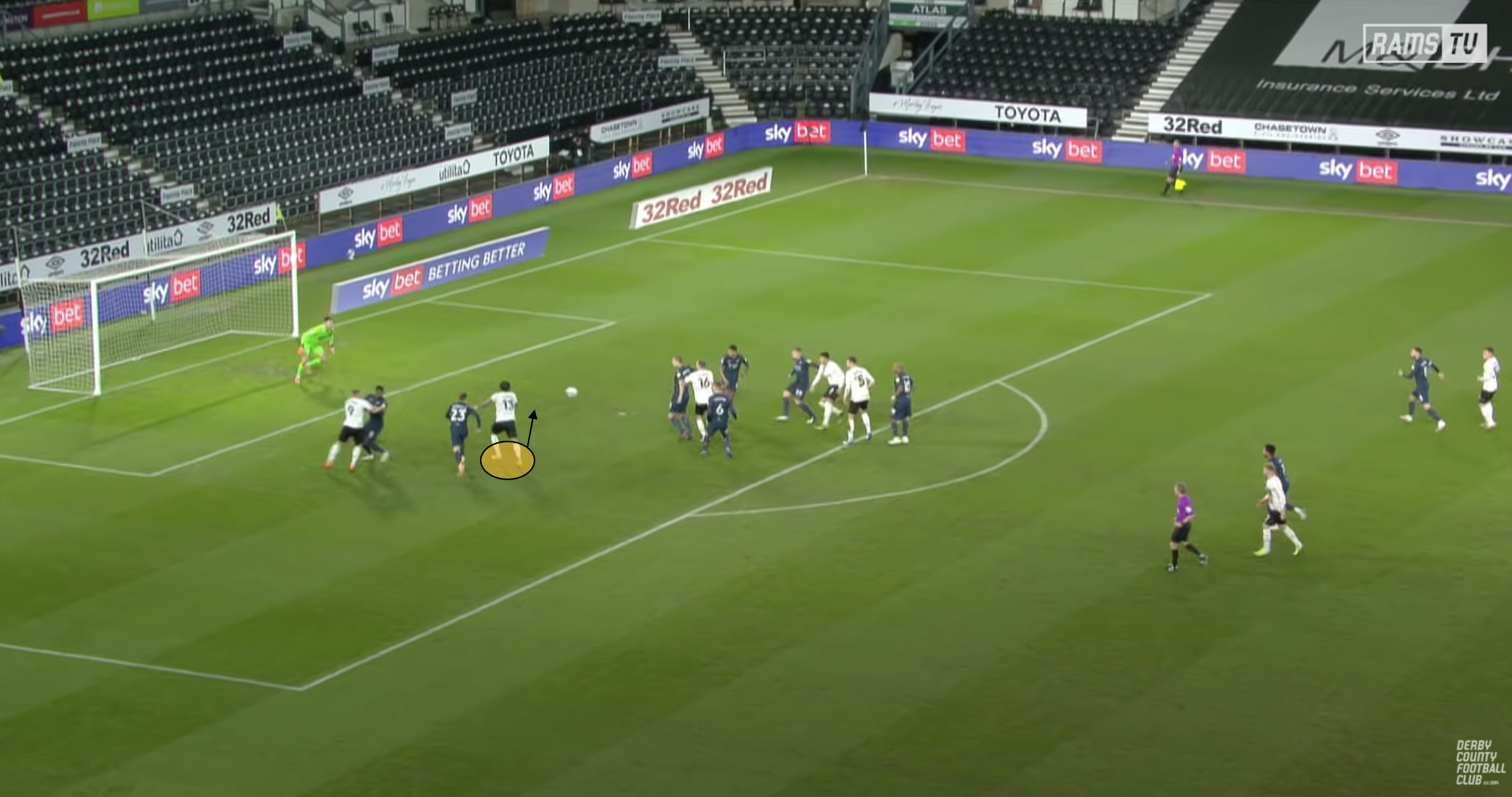 Kazim-Richards has been made the focal point of Derby’s attack and Rooney expects the intensity he played at for Manchester United from his strikers. In the below figure, we can see this intensity to get onto these loose balls or long passes, with Kazim-Richards calling for the long pass and him and Waghorn looking to reach it before the opposition and perhaps play each other through on goal. 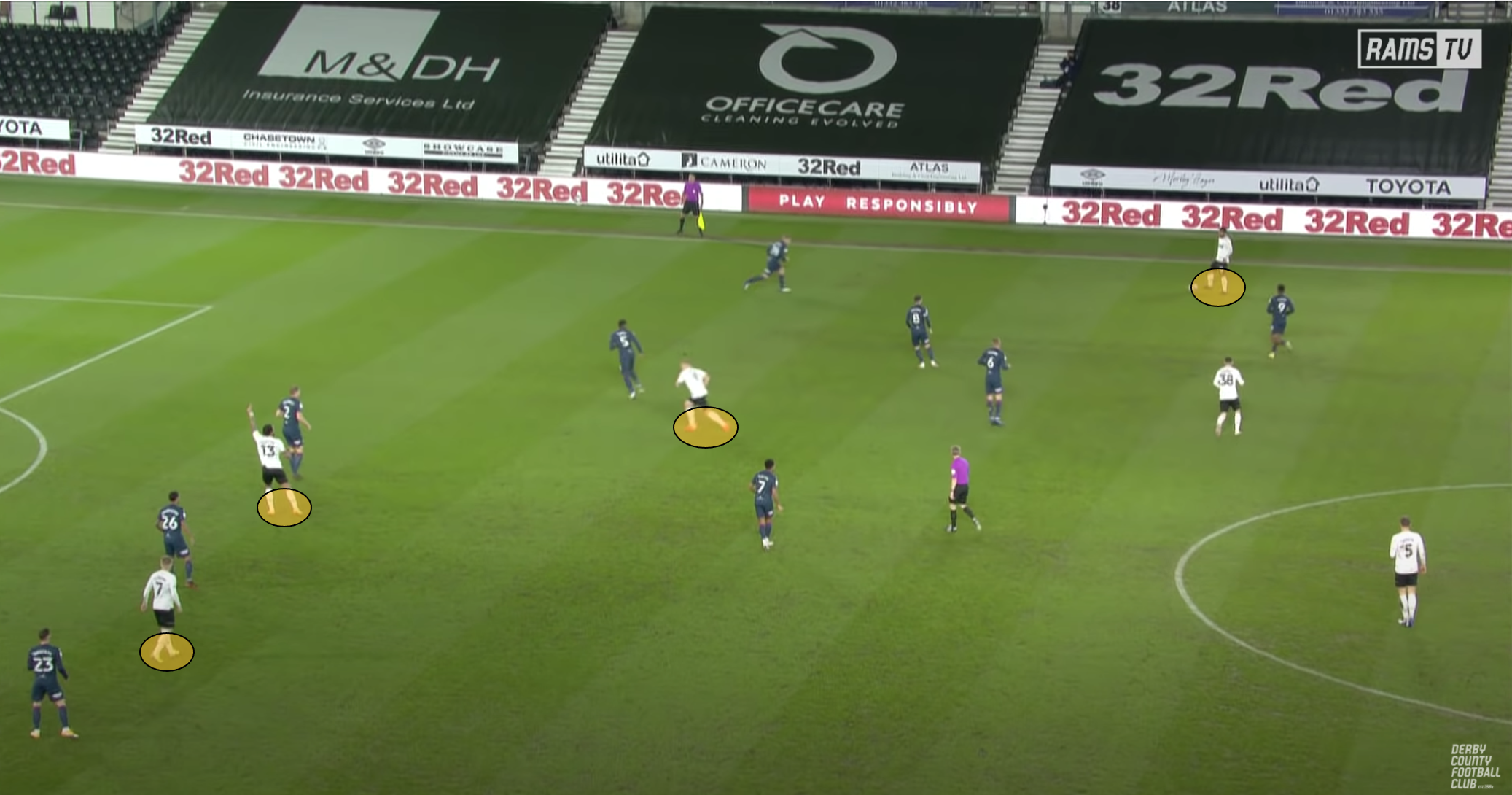 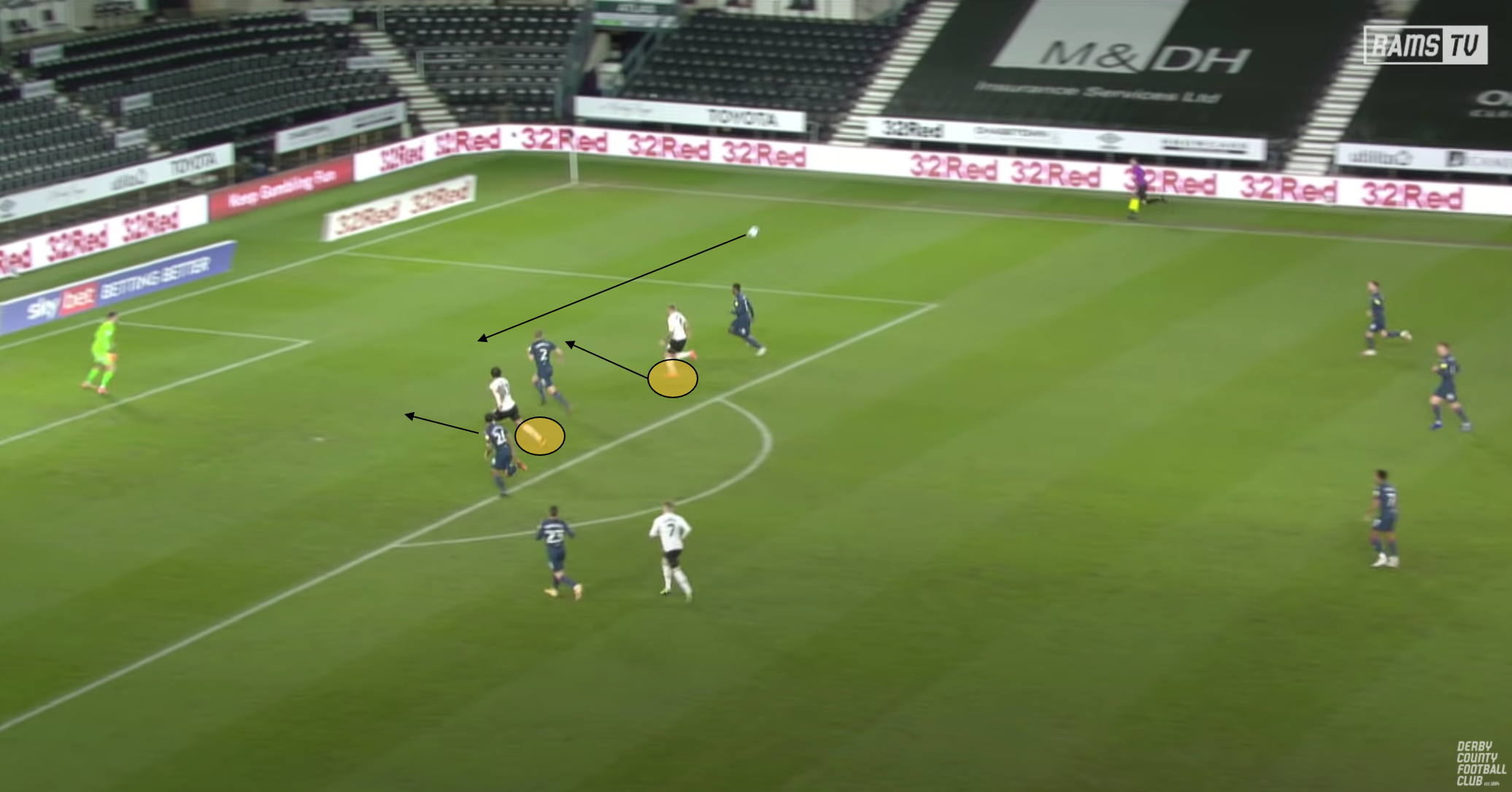 As stated earlier in the piece, Rooney is looking to model his style of play and work ethic off of Ferguson. He has simplified Derby’s play, re-focusing on the basics that the experienced players know all too well, whilst simplifying it for the younger players to learn. The Championship is a highly aggressive and competitive league. The defensive basics need to be there before you can even challenge in an exciting, attacking manner, and that will be the focus on Rooney’s mind after ticking the defensive box on his to-do list. This is the perfect way to reset his side. After all, Derby’s current aim is survival, they need not to look any further than this right now.

But, if we were to look ahead for Derby, it could clearly be said that Rooney is making a strong claim for the job on a permanent basis, regardless of the current position in terms of ownership of the club. Rooney’s first task in interim charge was to tighten the team up defensively. They were previously far too easy to play against, conceding. They need a more disciplined shape, which he has found. They needed to be more competitive, more determined and needed to get the basics right and so far, they are achieving this. However, being just six games in (eight if you include the games immediately following Cocu’s dismissal, which were seen as joint management games under Rooney, Rosenior and Given) means that it is perhaps too soon to make any decision one way or the other on his overall performance as head coach.

Rooney’s next task in the short term is to become more potent in attack and this is something Rooney is most certainly capable of. They will look to play at a faster tempo, which with the emergence of summer signing Kawil Jozwiak and the return to fitness of Jordon Ibe may be possible. They also want greater aggression in their attacking play, and Richards and Waghorn may be able to bring this at least in the short term.

Belief has returned to this Derby side and they will be hoping this upward momentum continues, even if they have been halted temporarily by a postponed fixture due to COVID-19 at Rotherham. They outplayed a strong and again high-flying Swansea side and this performance was full of promise and character. They now face a busy Christmas period as always, with Preston at home on Boxing Day followed by two away games, totalling 3 games in 7 days. These next three games could be a key determination as to whether Rooney is the right man to lead their charge back up the Championship table. 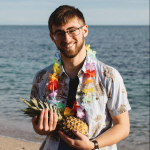