NorthEast United FC is a very different side from what they were last year, thanks to their newly appointed Head coach Gerard Nus. Former Liverpool coach has helped his side secure the fourth spot for the time being before the festive period. Whereas Odisha FC didn’t have the ideal start as they would be looking for in the Indian Super League. Stuart Baxter’s team is yet to register a win and are second last on the table with just 2 points in seven games.

In this tactical analysis, we will dissect the match events to understand the final outcome. The following analysis will focus on the tactics of the managers and learn about how it impacted the game. 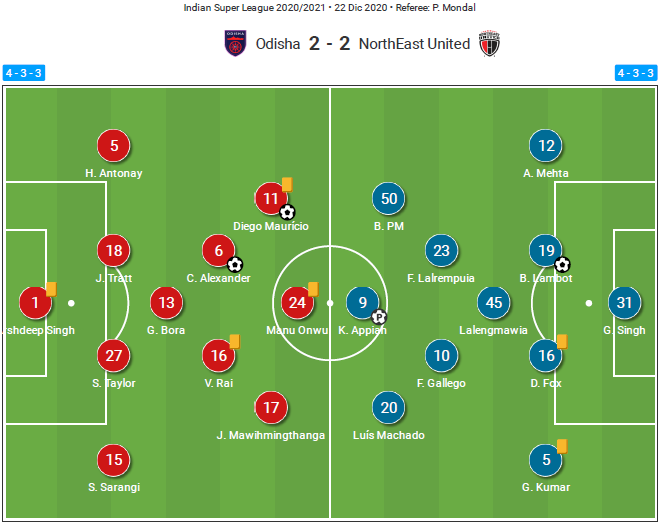 Since both sides started in the same 4-3-3 formation, the impact of the shape reduces and the weight shifts to the dynamism and individual abilities of the players. Baxter named an unchanged line-up from his 1-2 defeat against Bengaluru FC. Steven Taylor and Jacob Tratt continued their partnership in the backline. South African midfielder Cole Alexander played along with Gaurav Bora and Vinit Rai.

NorthEast United made four changes from their 1-0 defeat against Jamshedpur FC. Idrissa Sylla, Khumanthem Meetei and Rochharzela Rochharzela were replaced from the front-line with just the former Premier League striker Kwesi Appiah cementing his place. Khassa Camara was benched for the first time in place of Federico Gallego. The backline remains unchanged from the last match. 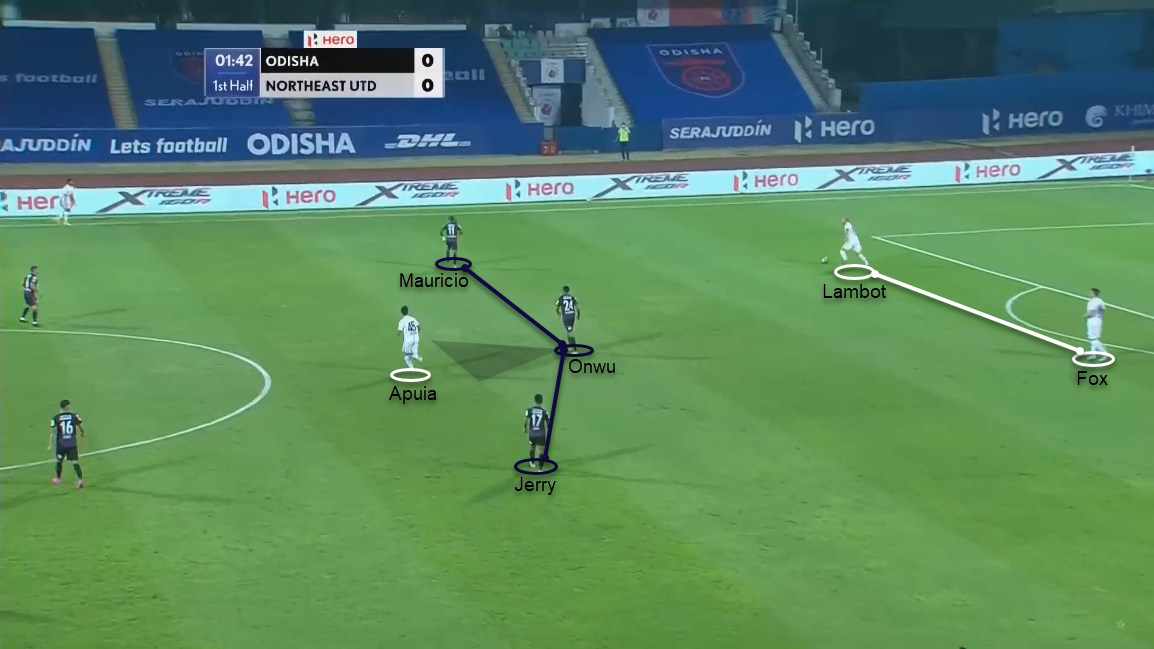 The Highlanders have averaged 37.8% possession so far in the past seven matches. However, in this match, they had the majority of the ball with 56%. That is because Odisha had a defensive set-up of 4-3-3 mid/low block. They observed strict space-oriented zonal marking with a low line of confrontation. As NorthEast pushed their full-backs higher, the two centre-backs Benjamin Lambot and Dylan Fox were put in a numerically inferior situation of 2v3. Yet they were rarely put under pressure by Odisha’s first line of defence as they focused on protecting the central space. 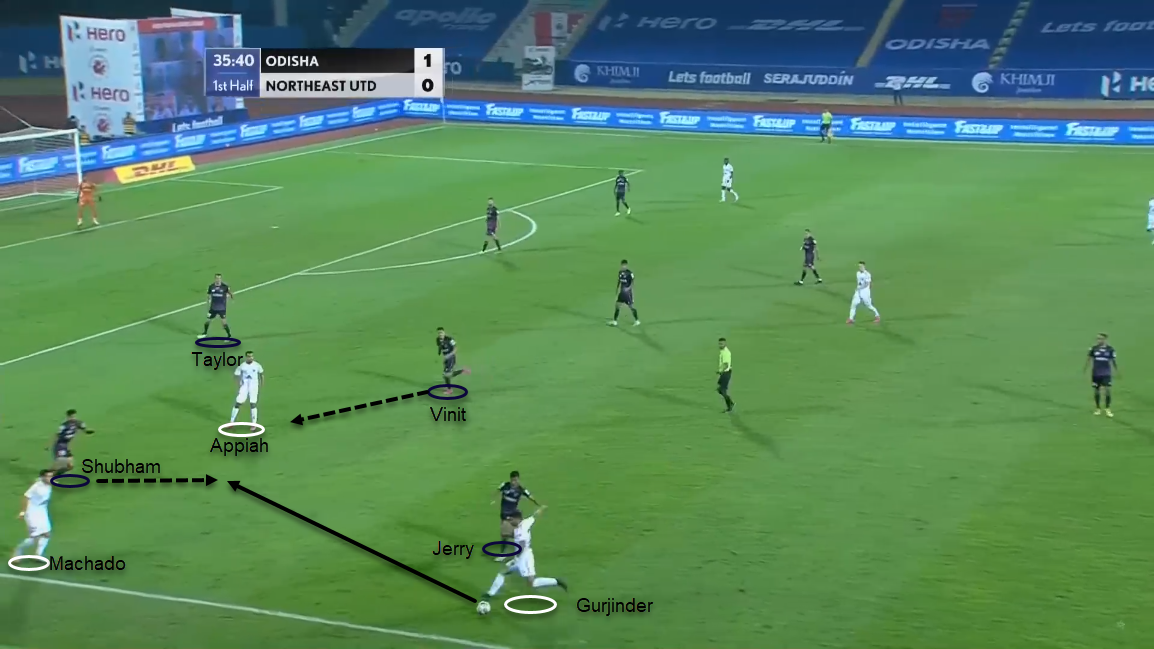 Odisha’s agenda was to force the play to the wider corridors with the motive to press in numbers. Their full-backs Shubham Sarangi (five recoveries) and Hendry Antonay (six recoveries) were very aggressive and gave minimum time to Diego Mauricio and Britto PM on the ball. They were helped by Vinit Rai (eight recoveries)and Cole Alexander (seven recoveries) on their respective flanks. Along with the ball sided centre-back and winger, Odisha put pressure with four players on the wings. The aggression from full-backs was imperative to force the play behind. This force NorthEast to play early crosses in the box or rely on combination play which was seldom effective. Machado’s movement did cause some trouble as he preferred to drift inside and deliver inswinging crosses or have a go at the goal.

NorthEast realised the defensive strategy of the Juggernauts after the first 15 minutes of the game. Federico Gallego started getting more involved in the build-up phase rather than staying in the left half-space. He was relieved of any sort of pressure due to Odisha’s zonal marking. The Uruguayan dropped deep to pick up passes from the centre-backs and deploy it to the forwards. He also manoeuvred in the central corridor to receive passes in the channel. 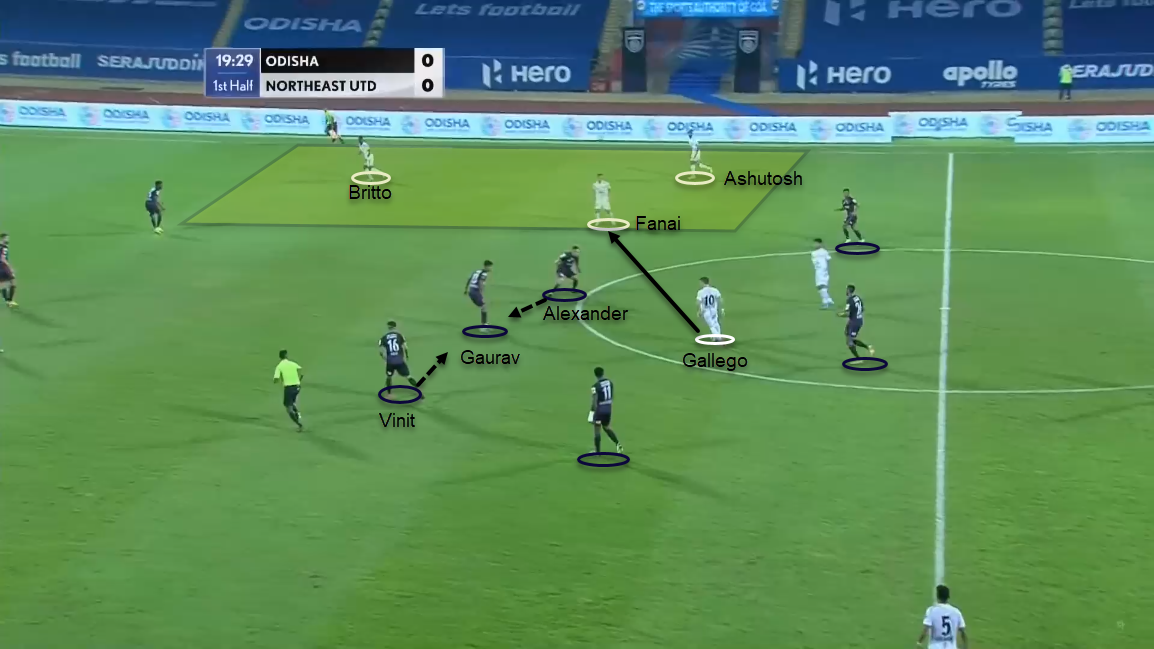 In such situations, the Juggernauts’ midfield adopted a passive approach to compress the central region instead of applying pressure. This gave Gallego time to choose his pass and offered NorthEast ample of space in the wide regions. They were also caught numerically inferior out-wide because of their space-oriented zonal approach. Odisha struggled when NorthEast was first able to play in the centre and then moved the ball out wide. Odisha was fortunate to be not punished from such exposed circumstances.

NorthEast and Odisha committed 19 and 17 fouls respectively. Numerous free-kicks along with corners and throw-ins led to the best opportunities for both sides in the game. Both teams managed to hit six shots on target from which five came directly/indirectly from set-pieces. The other shot on target came from a cross for both sides. 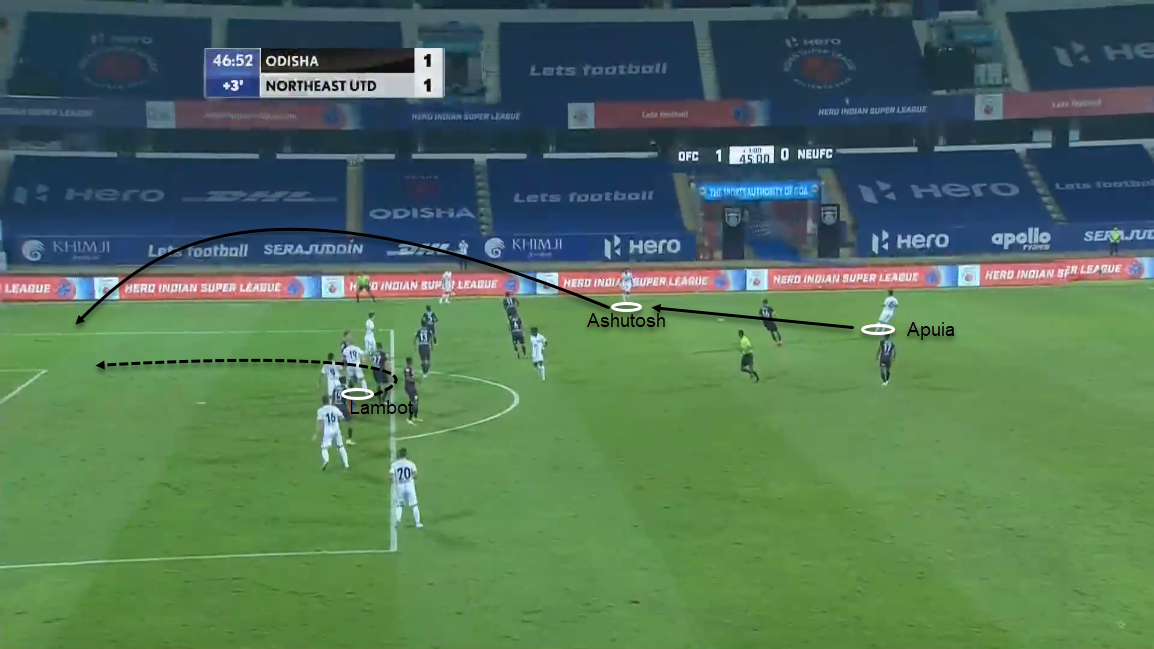 The Highlanders won an array of free-kicks in the final 10 minutes of the first half. We observed a few quick free-kicks taken while some were delivered deep into the box. Despite the delivery not being consistent to be recognised but the end targets (Kwesi Appiah and Lambot) were the same. A quick free-kick in the injury time disorganised Odisha’s set-up to deal with the set-piece. The final ball came to Ashutosh Mehta who delivered across at the front post from the deep. Lambot’s movement to run from the blindside to get in front of his man helped him win the header and get the equaliser for his team.

NorthEast’s second goal came from a precise penalty from Appiah. The Highlander forward came against Odisha’s goal-keeper Gurmeet Singh in a 1 v 1 situation. However, it’s debatable to know if there was any substantial contact which led to the foul for the penalty. 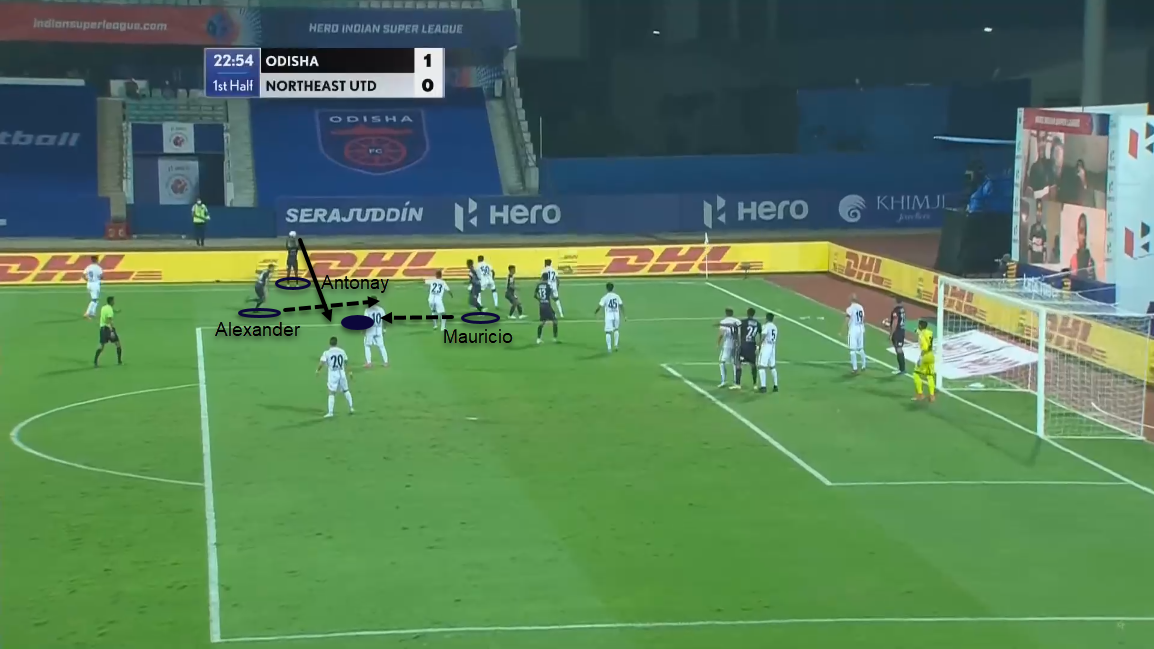 Odisha’s both the goals came from a throw-in from the left flank. In both scenarios, the common thing was the movement of Mauricio and Alexander to exchange positions. This was primarily done to vacate space for one another and lose their markers. Mauricio received the ball with his back facing the goal. He was quick to turn around and strike it hard and low into the near post. 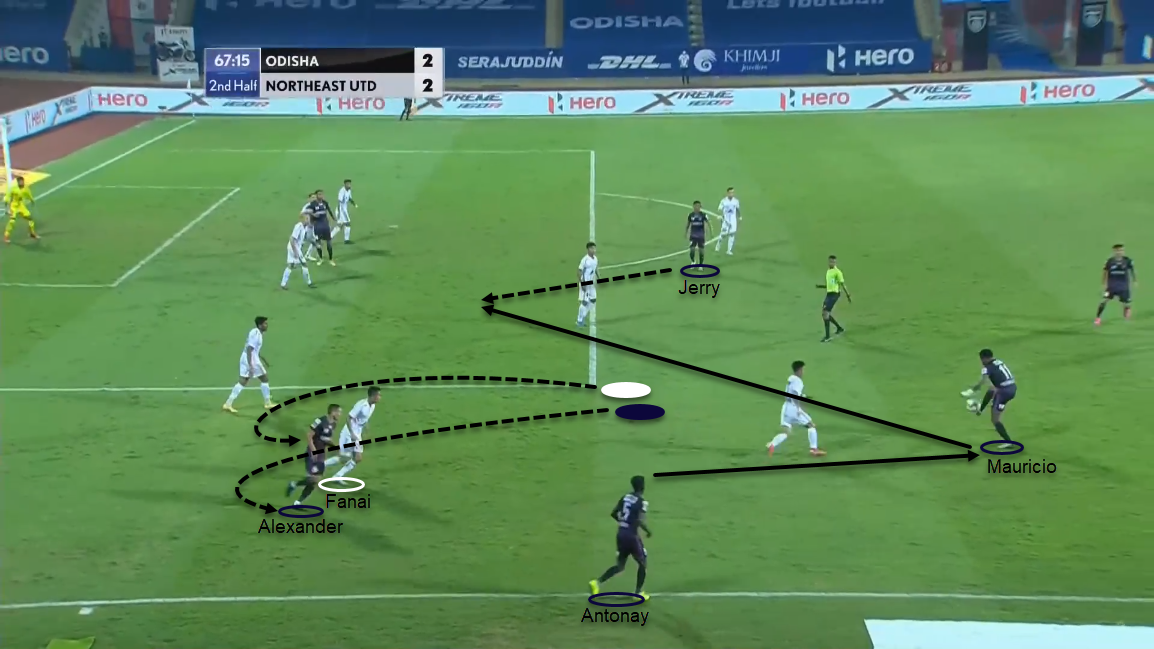 The second goal had similar development with Jerry being involved in the penalty box. Alexander smartly drew his man away for Mauricio to have space and time to receive the ball. The move ended with a spectacular curler from Alexander which gave Gurmeet Singh no chance to save it.

The Juggernauts were sceptical in progressing the ball from the deep. Arshdeep Singh took a direct route to find his striker Manuel Onwu who looked to flick the ball further up the field for his wingers. NorthEast United did engage higher up the field when Odisha had the ball in their defensive third. The Highlanders too defended in a 4-3-3 but with a different tactical idea. They followed a man-oriented zonal approach where players pressed in five channels respectively. 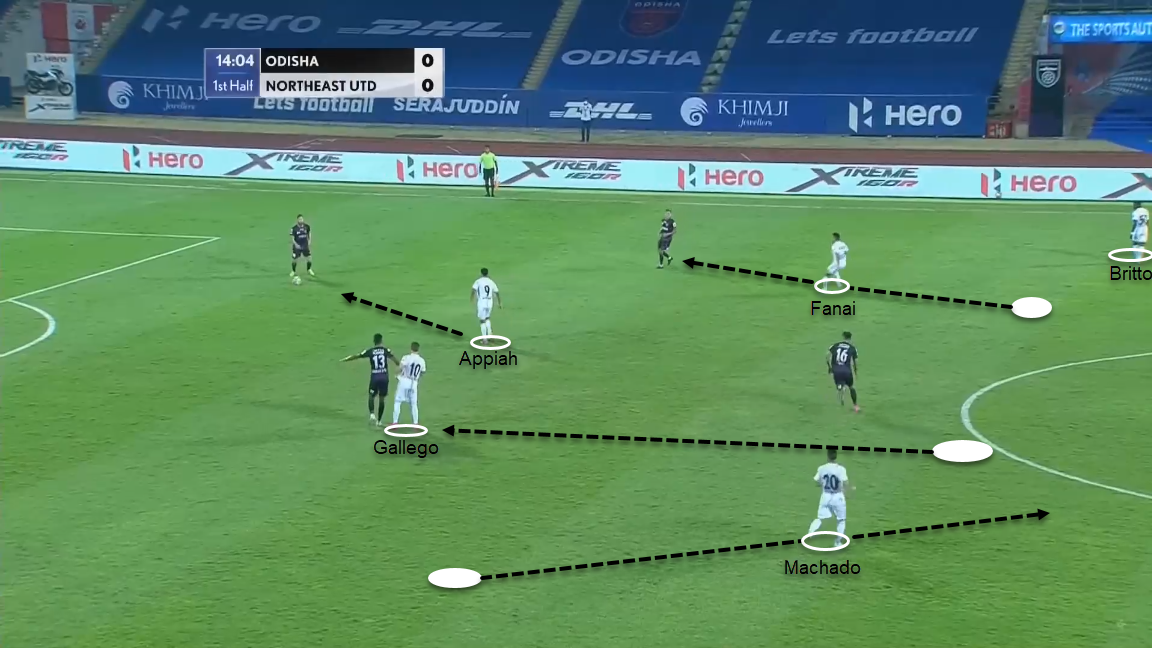 The centre-midfielders moved up closer to the opposition midfielders while the wingers dropped as the opposition full-backs moved up. Every player other than the striker (Appiah) were aware of their zonal channels and the players playing in those lines as they would mark them tightly. The back four stayed intact to deal with unforeseen threats like long balls over the top. 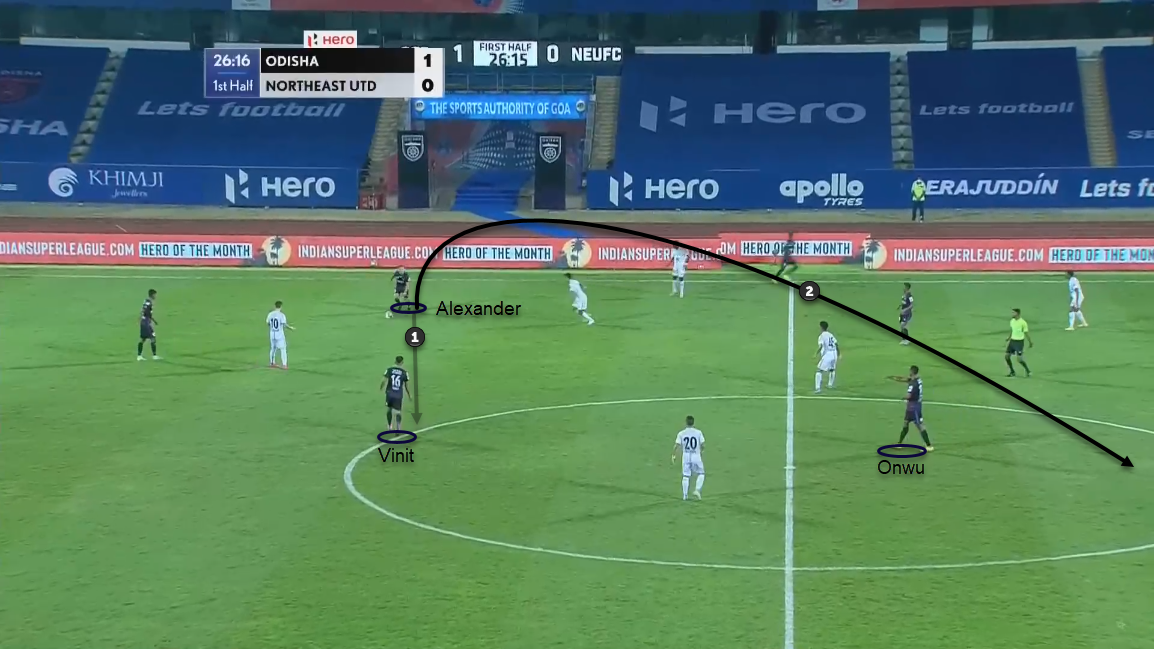 Despite the stringent structure, it was exposed to certain ideas such as positional interchanges, overloads etc. Yet the players would eventually deliver a long pass for the forwards. When Alexander received a pass from Antonay, Onwu had dropped back to support and pointed at Vinit to help him make a quicker and easier decision. However, Alexander opted to go long towards Jerry in spite of Vinit having to be free in space. His pass lacked weight and the trajectory was low due to which it fell in the path of Onwu who had to battle for it while not being prepared for it. NorthEast United won the second ball and Odisha gave away the possession cheaply. Odisha failed to create opportunities from open play and was therefore reliant on set-pieces for their chances.

The match was an end to end contest of creating constant goalscoring chances. The game was a close affair as NorthEast United and Odisha had xG of 2.75 and 2.40 respectively and it was more or less a fair result. Odisha face SC East Bengal next who are at the bottom of the table. NorthEast United will go up against last year’s champions ATK Mohun Bagan who are currently sitting at the second spot of the table.