I think if you told Coventry fans that after 34 games of this League one season they’d be sitting seven points clear of third place with a game in hand, then they would probably laugh at you. Their off-pitch ownership troubles have been well-documented in recent times leading to the Sky Blues being forced to play their home games at Birmingham City’s St. Andrews Stadium, 22.2 miles away from their usual home, the Ricoh Arena. Nevertheless, manager Mark Robins – in his second spell here – has guided them to lofty heights and has allowed the Sky Blues’ fans to dream once more.

This tactical analysis will focus on Robins’ tactical philosophy and conduct analysis on why Coventry has been so successful this campaign.

We typically associate the lower leagues of England as being a place where direct football is common and, due to the state of some the pitches, the obvious choice for a game-style whereby neat possession play is seen as impractical. Robins has subverted this perceived norm, having his team top of the league and playing some lovely, fluid football with some interesting tactical concepts.

Coventry’s tactics have allowed a few players in particular to flourish. Striker Matt Godden is currently standing at 14 goals for the season. Liam Walsh was brought in on loan from Bristol City in the summer to restart a stagnating career and has gone above and beyond expectations in a vital central-midfield role putting a number of man-of-the-match performances. Left-wing-back Sam McCallum may be the most interesting though, being recruited from Jamie Vardy’s V9 Academy, the young Englishman will be playing at Norwich City next season after the Canaries signed him in January them immediately loaned him back. The deal to sign McCallum could eventually get up £3.5m according to media reports.

Robins’ opts for a 3-4-2-1 formation in possession with a heavy emphasis on possession play. This formation morphs into a 5-2-2-1 out-of-possession.

As with many possession-based systems that play three-at-the-back, the centre-backs split wide to provide width to the build-up. This causes issues for an opposition press as there is now greater distance to cover. Furthermore, the wing-backs, as the only natural source of width, take up positions on the touchline to offer the pass down-the-line. Higher up the pitch, Robins elects for a more unconventional approach by essentially playing two 10s. This duo have a freer role to operate between-the-lines and in the half-spaces. Striker Godden’s main tactical responsibility is to offer depth. It is fair to classify Godden as a poacher and his instinct is to make penetrating runs beyond the last man, subsequently vertically stretching the opposition defence.

The role of the double pivot

When wanting to play out from the back having central-midfielders that are technically proficient and comfortable under pressure is imperative. They need to have adequate spatial awareness to create passing lanes and angles to nullify an opposition press and force the opponent’s pressing structure to be excellent in order to regain possession.

The regular midfield pair consists of Walsh and Scotsman Liam Kelly. Walsh, in particular, has been a standout performer, being able to routinely dictate games and generally acting as the lynchpin for play to flow through. The Bristol City loanee’s superb passing range lends itself very well for Coventry’s tactics. Walsh can switch the play well to a wing-back, whilst also being able to play the ball in-behind for Godden to attack. 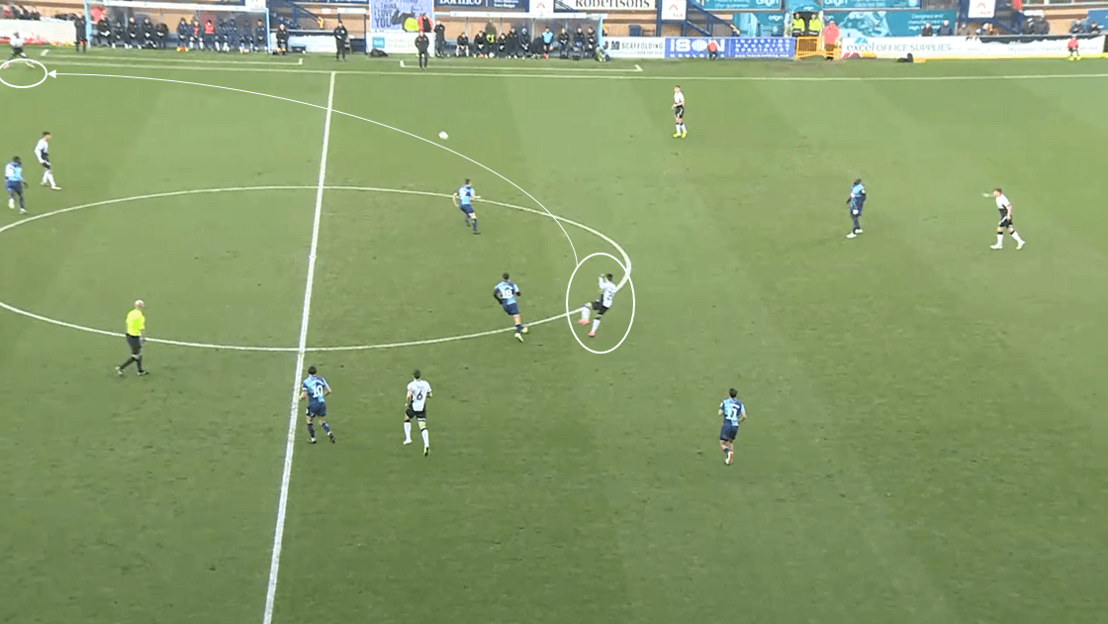 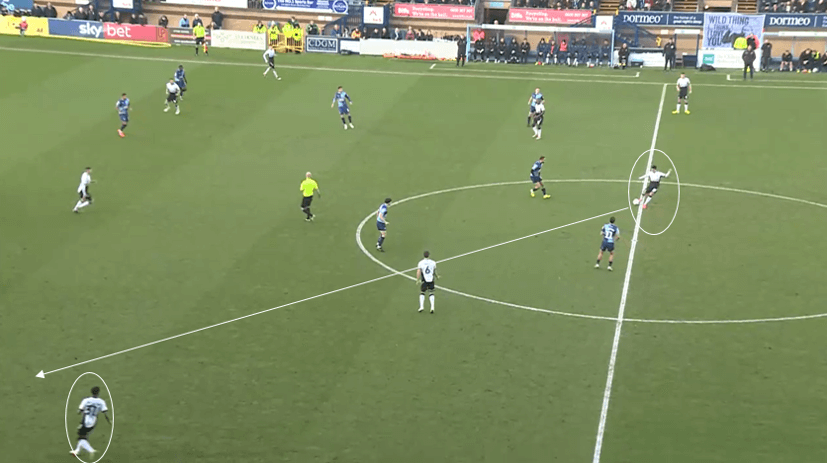 In the example above we see two instances of Walsh’s influence on Coventry’s attacking play. Initially, we see him pick the ball up centrally and hit a sweeping diagonal out to right-wing-back Fankaty Dabo. Walsh follows his pass, receiving off Dabo, and then switches the side of attack again towards left-wing-back McCallum. Having a player that can do this helps to quickly exploit issues in an opponent’s defensive set-up.

As mentioned earlier a central-midfielder in Robins’ system needs to be positionally aware to be available for passes. Striker Godden’s speciality is not winning aerial duels – instead, it is acting as a poacher. Therefore, having a midfield presence constantly, and being available much of the time allows teammates particular attributes to be maximised. For Coventry’s players, this involves technical instead of physical, direct football. In the image below we once again see Walsh cleverly situated in space, with no immediate pressure – to do this often requires a great deal of scanning to identify these pockets and is an accepted hallmark of an intuitive, quality central-midfielder. 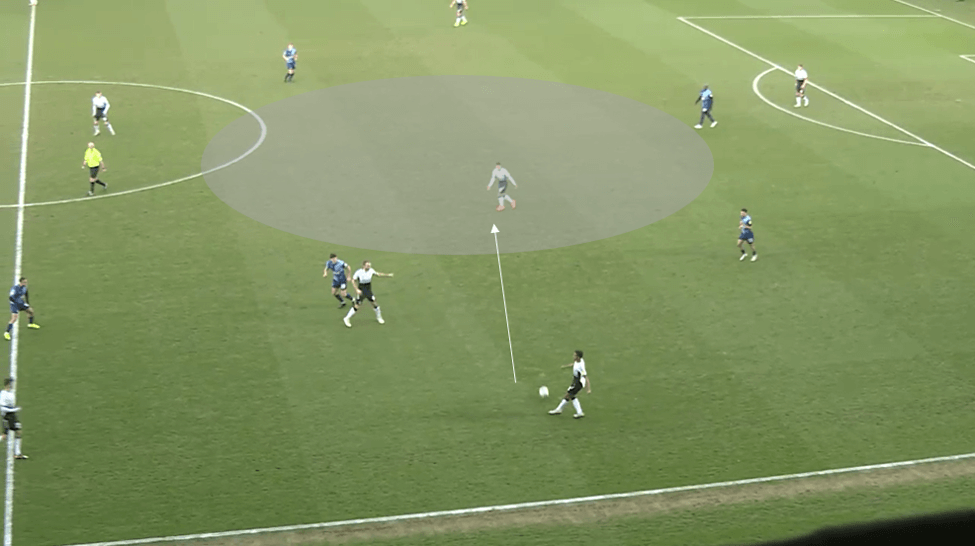 Another feature of the Coventry build-up phase is avoiding the over-occupation of the pivot space. Whilst it is important to have a presence you need to avoid it becoming congested. This is why, as you can see below, only one of Walsh or Kelly is situated centrally. No. 6 Kelly makes a movement out wide, emptying the pivot position for Walsh to shift across into. This rotational movement from Kelly has two purposes. The first, to attract the opposition thus releasing space elsewhere, as portrayed here. Alternatively, it is to prevent a teammate in a wide position becoming isolated and losing possession. 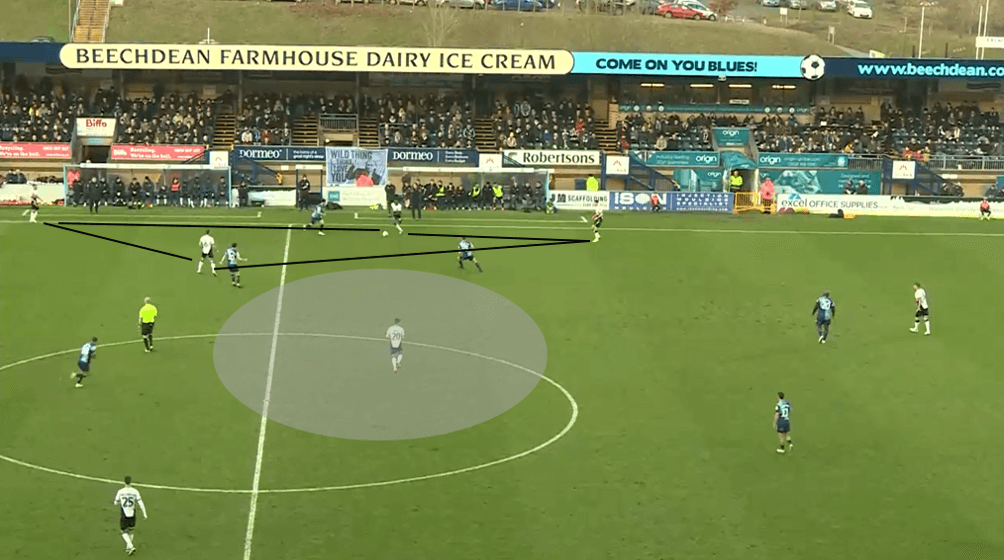 Another example of this can be seen against Ipswich below. No. 15 Dominic Hyam has possession and Walsh’s positioning creates a potential, line-breaking passing lane, which is ignored this time though. However, a diamond between Walsh and the three centre-backs is still visible, which is an ideal shape for ball progression due to its staggered nature. 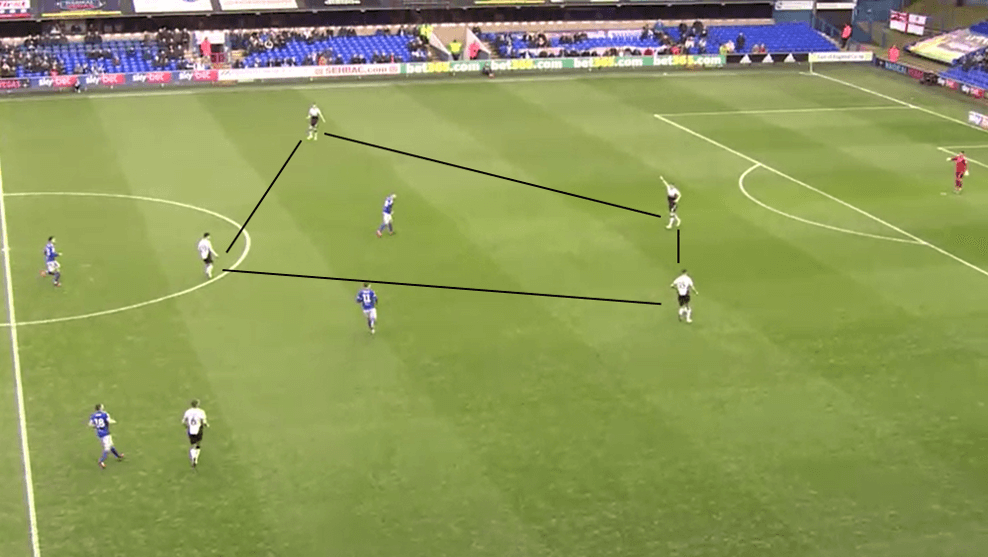 Prominence of the wing-backs

To avoid Coventry’s play becoming too centralised and thus crowded, there is a great deal of responsibility on McCallum and Dabo to have the energy to offer an alternative, wide attacking threat while still fulfilling their defensive jobs. It is important for them to laterally stretch the play and be potential crossers into the main attacking trio. Their youthfulness is beneficial to their stamina levels – Dabo is 24 and McCallum is even younger at 19. 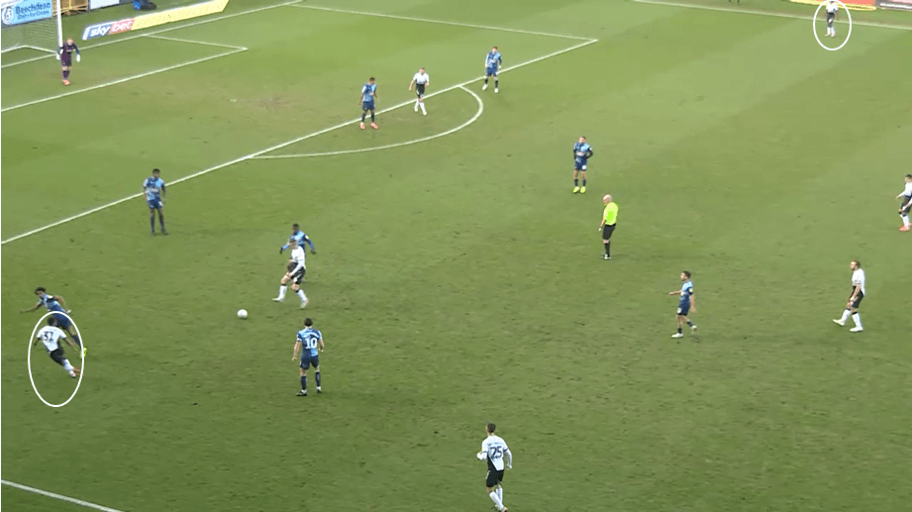 In the example above we can the significant role of the two during attacking phases of play. With the ball on left-flank, McCallum is actively involved in the play, beginning a depth run. In addition to this Dabo has given himself as much room as possible for a potential switch of play. Whilst the 24-year-old may not participate in this phase, his presence gives the Wycombe players problems.

The wing-backs’ importance cannot just be felt in the final third but during the build-up phase. Their respective positioning on the touchline maximises the space for receivers in central areas. We can see the benefits of this approach below. In the first picture Dabo, just off-screen, has occupied left-back Joe Jacobson allowing Zain Westbrooke to receive possession without pressure. Dabo then makes an overlapping run to prevent Jacobson pressing Westbrooke who then is free to make to another forward, lofted pass into Jordan Shipley, who is running from deep beyond the Wycombe defence. This move eventually results in a goal for Coventry after Shipley lays it off for Godden to rifle in. 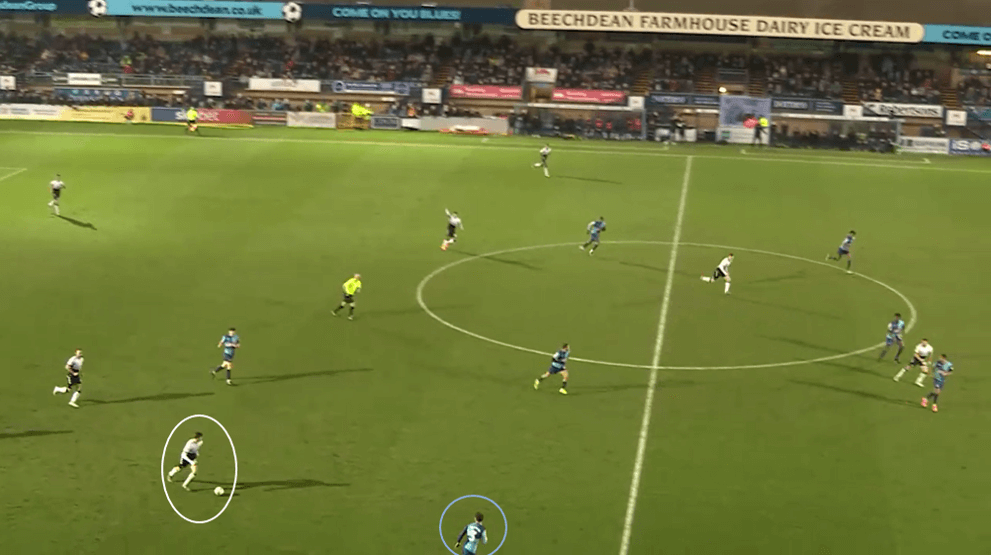 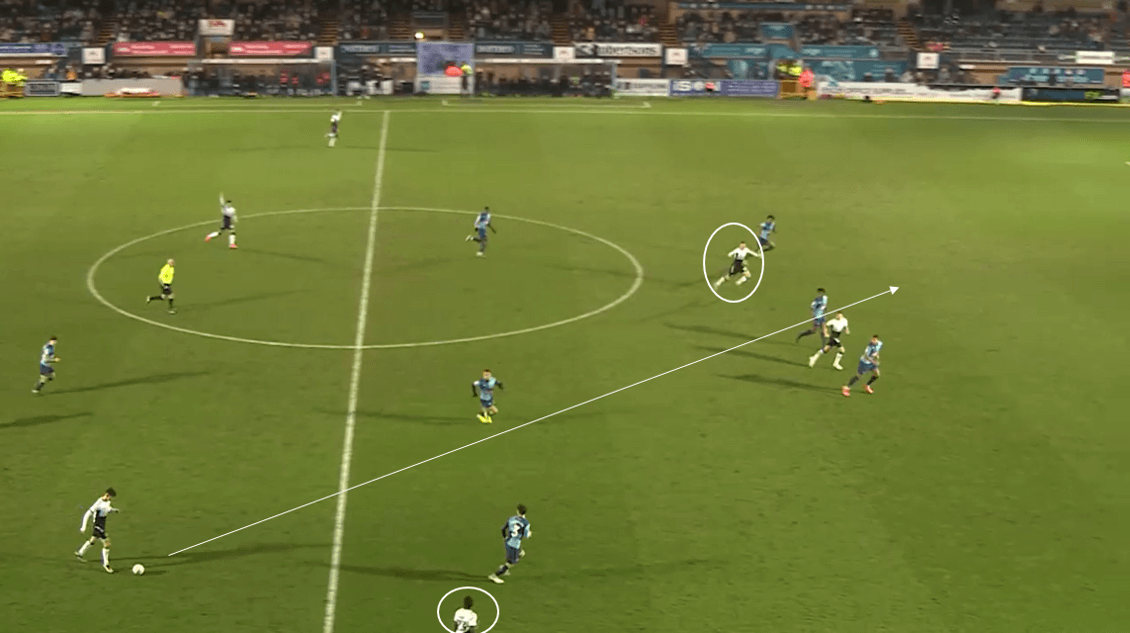 Furthermore, their roles help when Coventry have a goal-kick. Because Robins’ philosophy is intent on playing out of defence, the opposition may push up and thus squeezing space. Unlike a four-man defence, having wing-backs means there are more passing options to help with progression. Also, as you can see underneath, they are situated on an alternative, higher line, but there is the cover of the three centre-backs in case of a turnover.

Pressing players will then need to wary of the respective wing-backs in the wide areas for a potential line-pass, therefore, giving more space for the double pivot centrally. Here below, the No.2 Sido Jombati is aware of McCallum releasing Walsh who receives under little pressure. 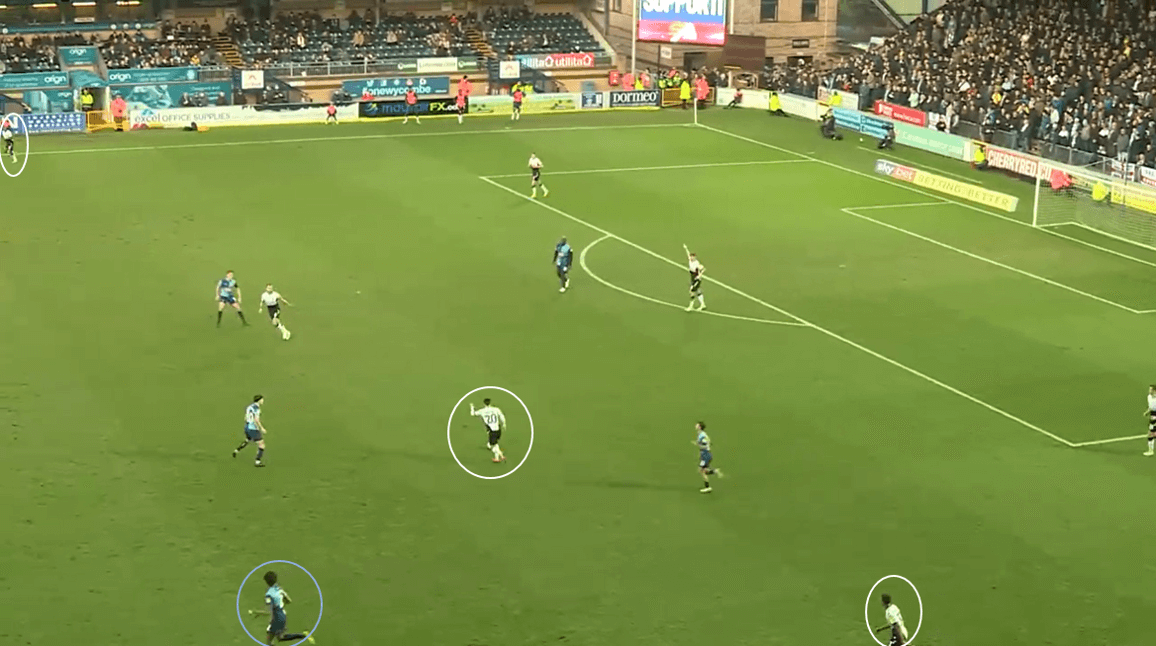 We’ve already outlined the principle of width in Robins’ philosophy, but depth is also a key part of his game model. These movements, commonly done by Godden, forces the opposition defence to back-track to marshal him (or others), thus potentially unbalancing their structure. Additionally, because Robins chooses to play two 10s, this freeing up of space for them provides them greater room to operate in. 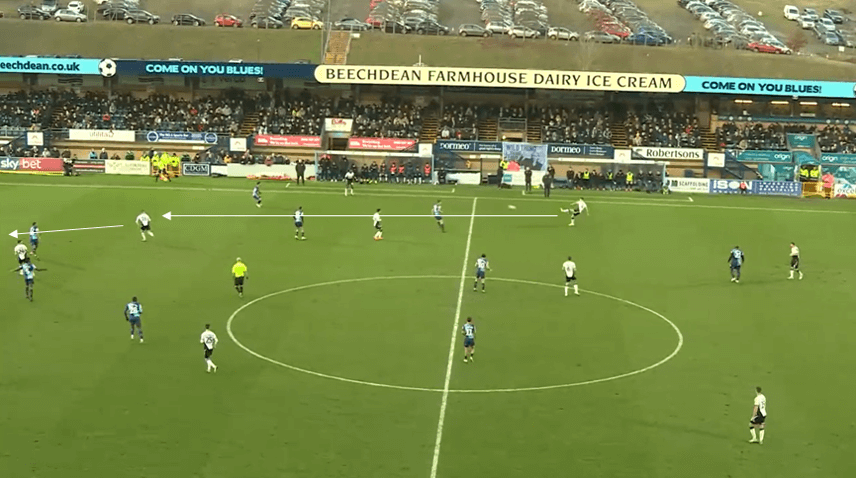 Here above we see this in practice – Godden’s positioning has helped free up Shipley by dragging the Wycombe defence a yard deeper. Shipley then exploits this newfound extra space by playing Godden in who scores.

Another example of this tactic is visible below, where Westbrooke hits a direct ball over the defence into Shipley who can lay it off for Godden to score. 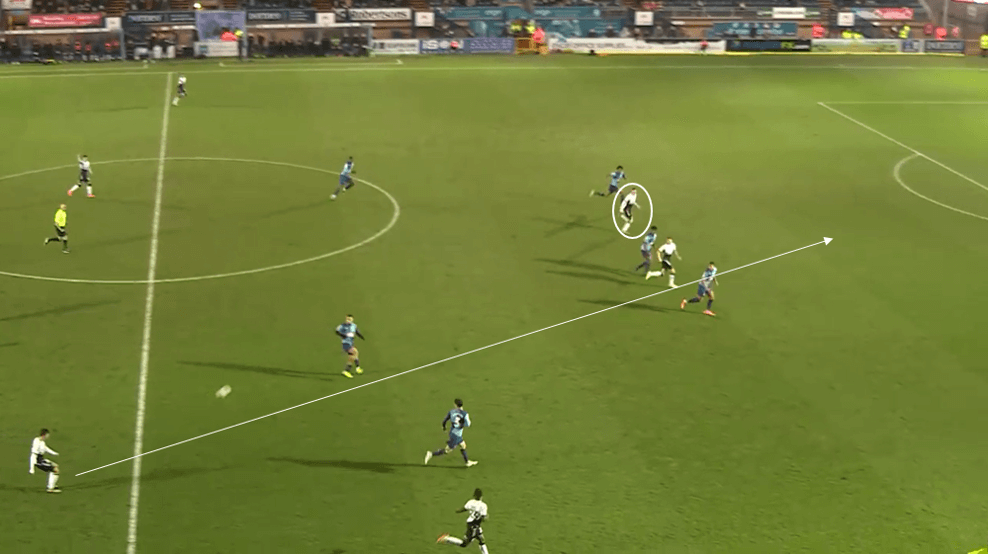 Because this method requires the ball to travel a longer distance and quite likely for the ball to go airborne there is naturally more risk attached to the pass. Therefore, supporting players need to advance along with the ball to offer additional options for the intended target of the initial pass. Neglecting this would likely result in possession being wasted frequently and the tactic’s effectiveness on a whole being severely diminished. For example, doing this when playing a 4-5-1 wouldn’t be advisable due to the distance between the lone forward and his teammates.

Coventry’s success this season has been quite the surprise. Amidst turmoil, Robins has united the club by implementing an attractive and effective playing style, with some interesting tactics that have taken them top of League One. Whether his game model is transferable to the Championship is another matter – we have seen the troubles of Luton Town and Barnsley this season of trying to play the same, expansive way. Perhaps there, if they manage to get promoted, we will see the true managerial ability and tactical nous of Robins.