The summer transfer window has now officially slammed shut after one of the most hectic last days in recent memory as clubs scrambled to fill perceived gaps within their squad. The end to the transfer window is a time when rational thought can go out of the window.

Before I worked within football, I assumed that deadline day was a time for clubs who were not ‘smart’ or ‘organised’ because of course you would look to have all of your business complete before that point, right? Well, while there is perhaps some truth to that, the reality is that no club can afford to completely sit things out. You always have to be aware of any potential opportunities for deals that suddenly become available where previously they were not realistic or achievable.

Even with that said though, I still believe that a ‘smart’ club will only be looking for these type of deals and not looking to add players in key areas of their squad.

There was a sense of panic around so many clubs as the window came to a close yesterday and you have to wonder how many of these deals were completed without real due diligence being completed. There are though, of course, always instances in which deals made towards the end of the window do work and we see those players become important pieces for their new sides.

In this data analysis piece, we will pick out four interesting transfers that occurred in the last week of the window. We will use data and statistics, from the 2021/22 season to give a decent sample size, to give an idea of the type of profile of the player that these clubs have signed and we will give a brief overview of each player.

The data for this piece is from Wyscout and has been converted to percentile rankings which compare each player to others who played in their division in the same position. 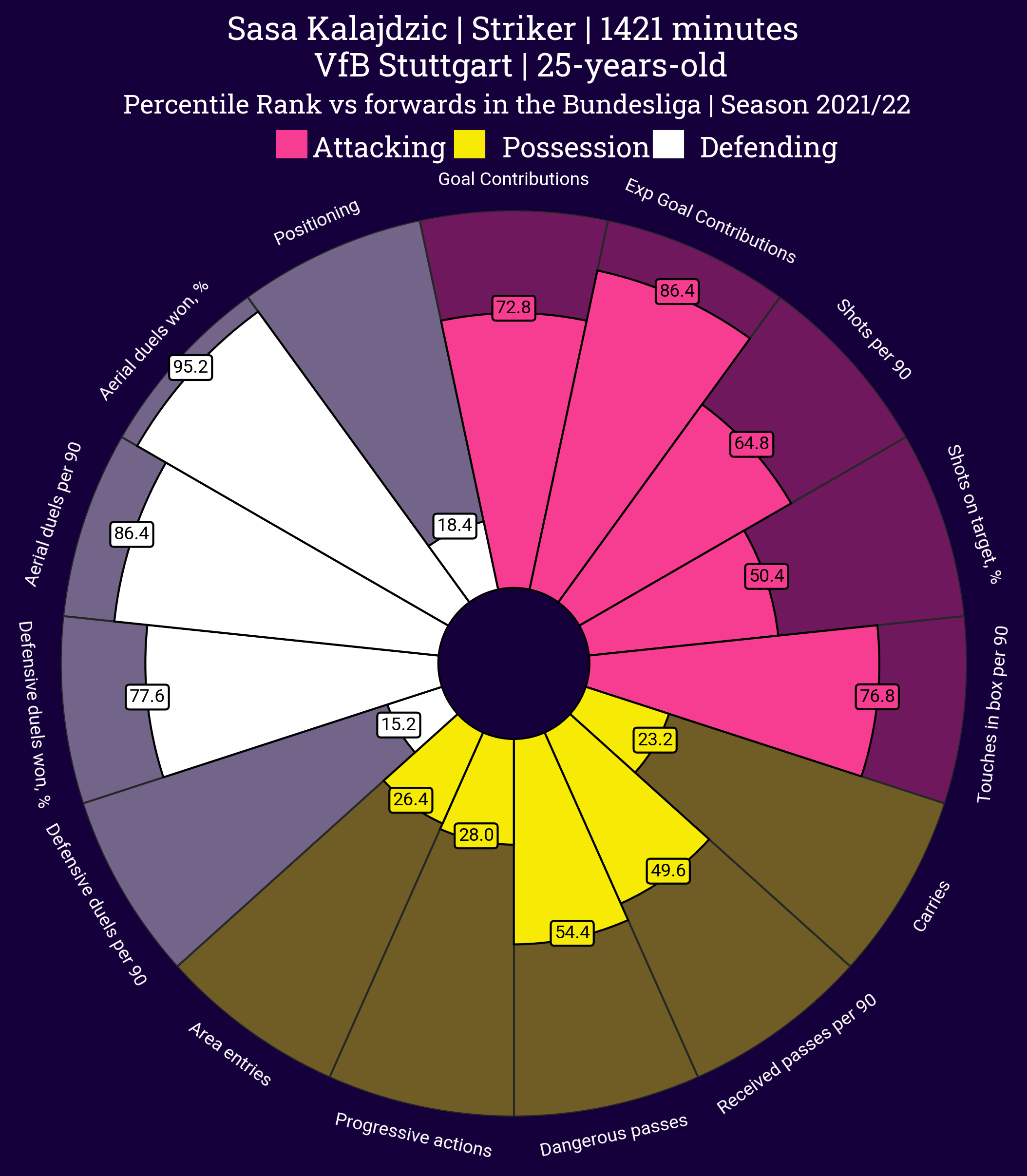 The move of the Austrian international striker Sasa Kalajdžić from VfB Stuttgart to the English Premier League was one that has made sense for a long time now. This would have, for example, been a move that would have improved Manchester United or Everton in particular given their issues at the striker position. As a consultancy, we at TFA HQ have actually done some work in the past on Kalajdžić and his suitability for the Premier League was very much surfaced in that report.

Wolves are the team, however, who have won the battle, if there was actually a battle, to sign the Austrian international and he represents a real upgrade at the position, at least given the loss of form of Raul Jimenez.

Let’s get the obvious part out of the way early on. Kalajdžić is huge, He is listed at 200cm | 6’7″ and unlike Peter Crouch, he is actually good in the air. We have to be careful, however, not to make the mistake in thinking that the Austrian international is a striker who can only play as a target forward in looking to win aerial duels and flick the ball on to more technical teammates. He is instead the embodiment of the term ‘good feet for a big man’ in that he has great touch and the ability to receive and manipulate the ball with his feet.

He is not a player who will threaten with runs behind the defensive line and he is not a ball carrier but if he receives the ball in the final third or penalty area then he does represent real danger. His timing, anticipation and movement, all of which are integral for forward players in the modern game, are also very good and his capacity to attack crosses from the wide areas will provide a real focal point for Wolves when they enter the final third.

Kalajdžić moved to Germany in 2019 when he signed for VfB Stuttgart from Admira Wacker and in that time he established himself as one of the best attacking players in the Bundesliga, to the point that he was reportedly close to joining Bayern Munich earlier in this window.

Going forward, we believe that Sasa Kalajdžić will have a positive impact on this Wolves side. 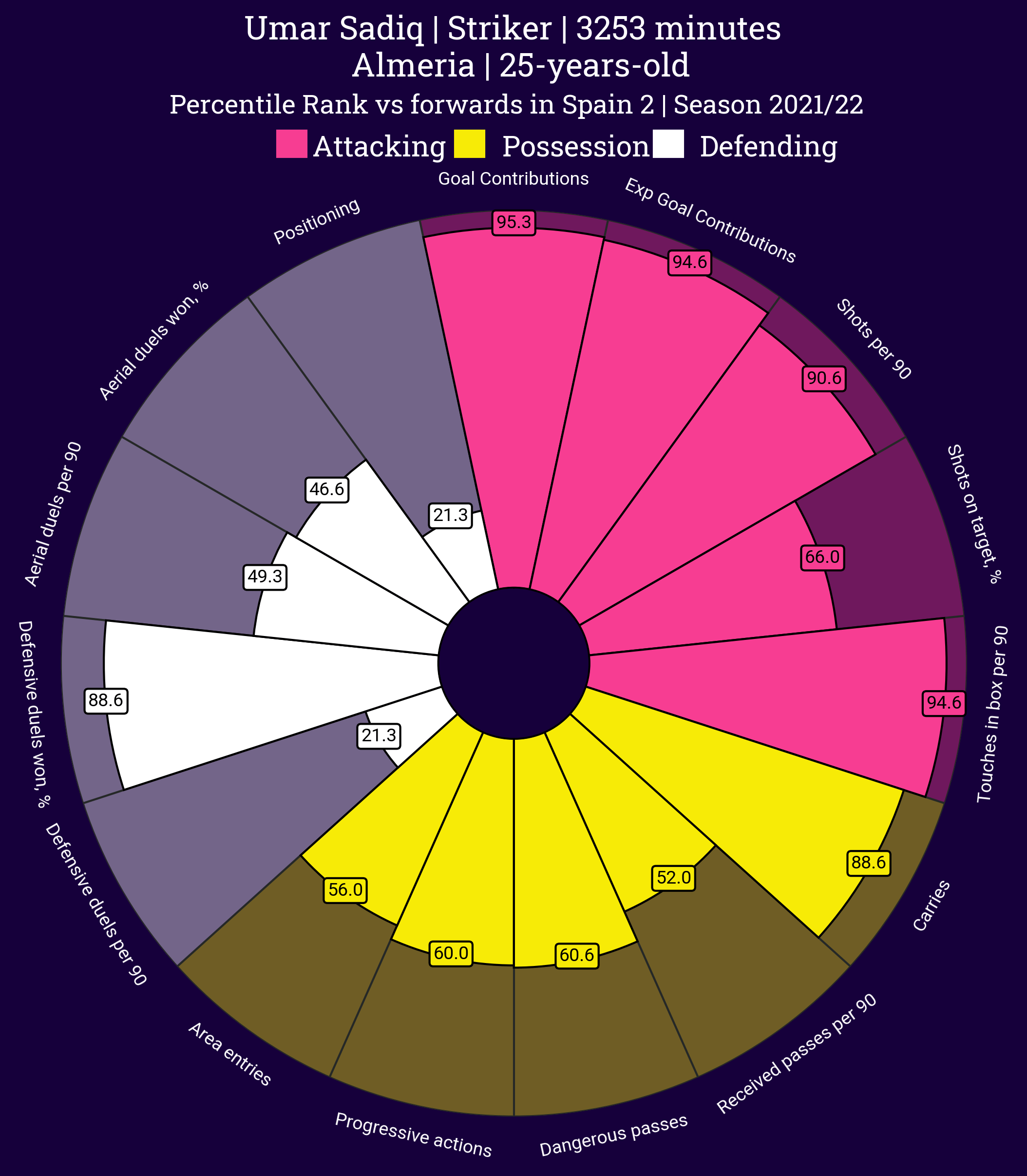 The next player on our list is the 25-year-old Nigerian international forward Umar Sadiq who has made the move within Spain from Almeira to Real Sociedad. In truth we could have included the striker that Sadiq has been brought in to replace as the Swedish international Alexander Isak made the move from Real Sociedad to Newcastle United. Instead, however, the decision to replace Isak with Sadiq is one that we find truly fascinating.

Sadiq is an interesting player as much for his career history to this point as for his output over the last two or three seasons or his career. He was initially on the books of Spezia in Italy before moving to AS Roma. What followed, however was a series of loan moves that took in the likes of Bologna, Torino , NAC Breda, Rangers, Perugia and Partizan Belgrade. He never really seized the opportunity in any of these loan moves before making the move to Partizan permanent for £1.8M in 2020. At that point his goal output exploded and he earned a move just 10 months later to UD Almería for £8.1M (where he was signed to replace a certain Darwin Nunez) and two seasons later he has moved to Real Sociedad for a reported £18M.

The Nigerian international is listed at 191cm | 6’4″ and he is a real handful in front of goal. He is quick and powerful with good movement and anticipation in the penalty area, although at times, he can look clumsy and less than graceful in front of goal. Nevertheless, in the build-up play he is someone that has proven himself to be extremely effective.

It will be fascinating to see what kind of impact Sadiq can have at a club with a higher standard of teammate. 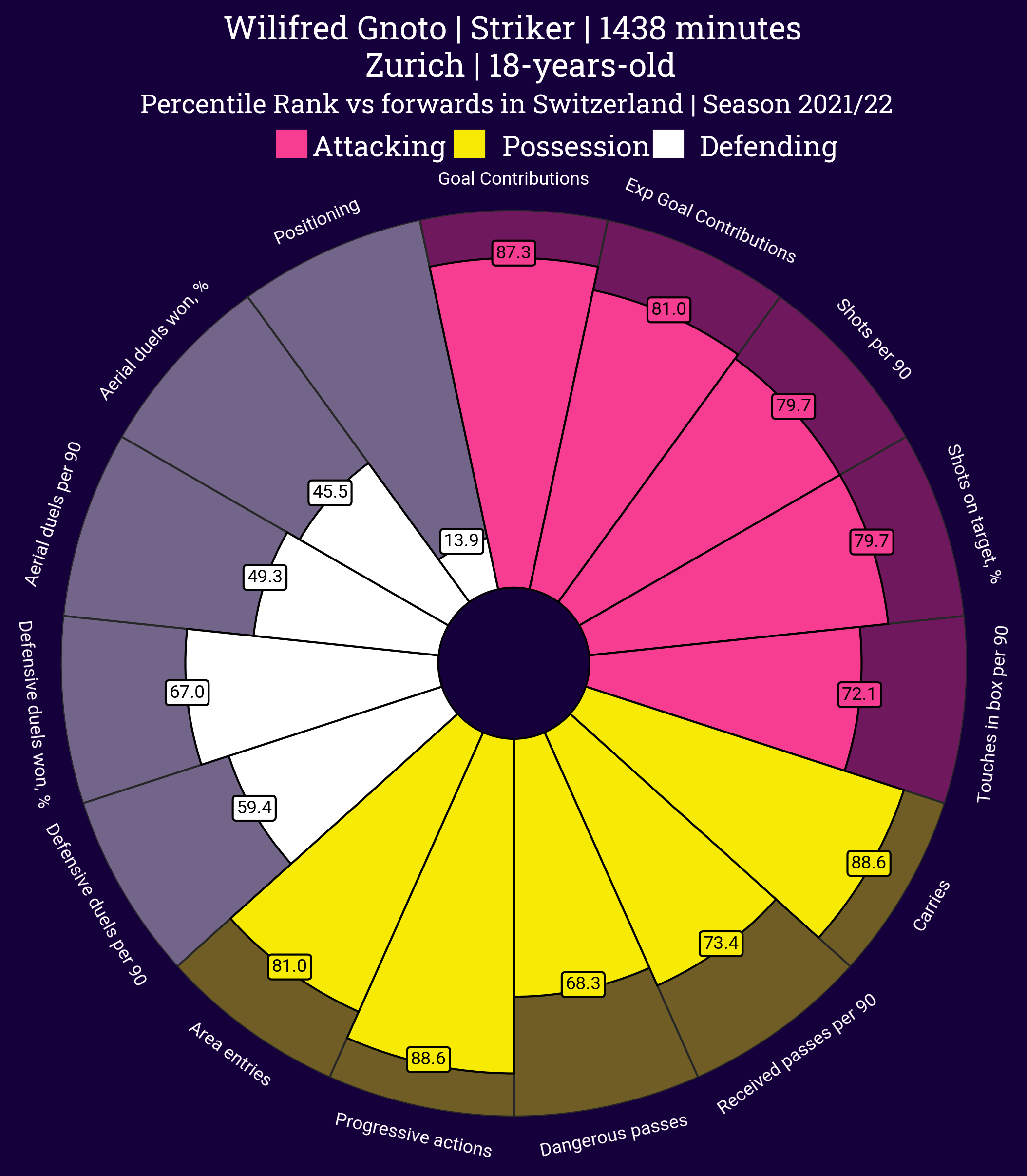 Next up, we have the move that perhaps represents the greatest variance in terms of boom or bust from the four deals that we have picked out in the move of the 18-year-old Italian international striker Wilifred Gnoto from FC Zurich to Leeds United. This was a move that was met with confusion from some sections of Leeds fans as they were, perhaps understandably, unfamiliar with the precocious 18-year-old forward. There are others, however, who are more than a little excited at the prospect of the young Italian moving to Elland Road. We at TFA definitely fall in the latter category.

Wilifred Gnoto is listed at 170cm | 5’7″ with a stocky build. He is an explosive and dynamic forward who has the ability to burst into space behind the defensive line. For such a young striker, he also displays very impressive attacking instincts in that he always seems to be positioned in the right place at the right time in the penalty area.

He was initially a product of the youth academy of Internazionale before moving in 2020 on a free transfer to join Zurich. In just two seasons the Swiss side have seen their investment in the young Italian turn a significant profit as Leeds have reportedly paid £4.05M to secure his signature. We should also point out at this point that Gnoto, despite only being 18-years-old, has already been capped four times for the senior Italian international team and he has one goal at full international level. 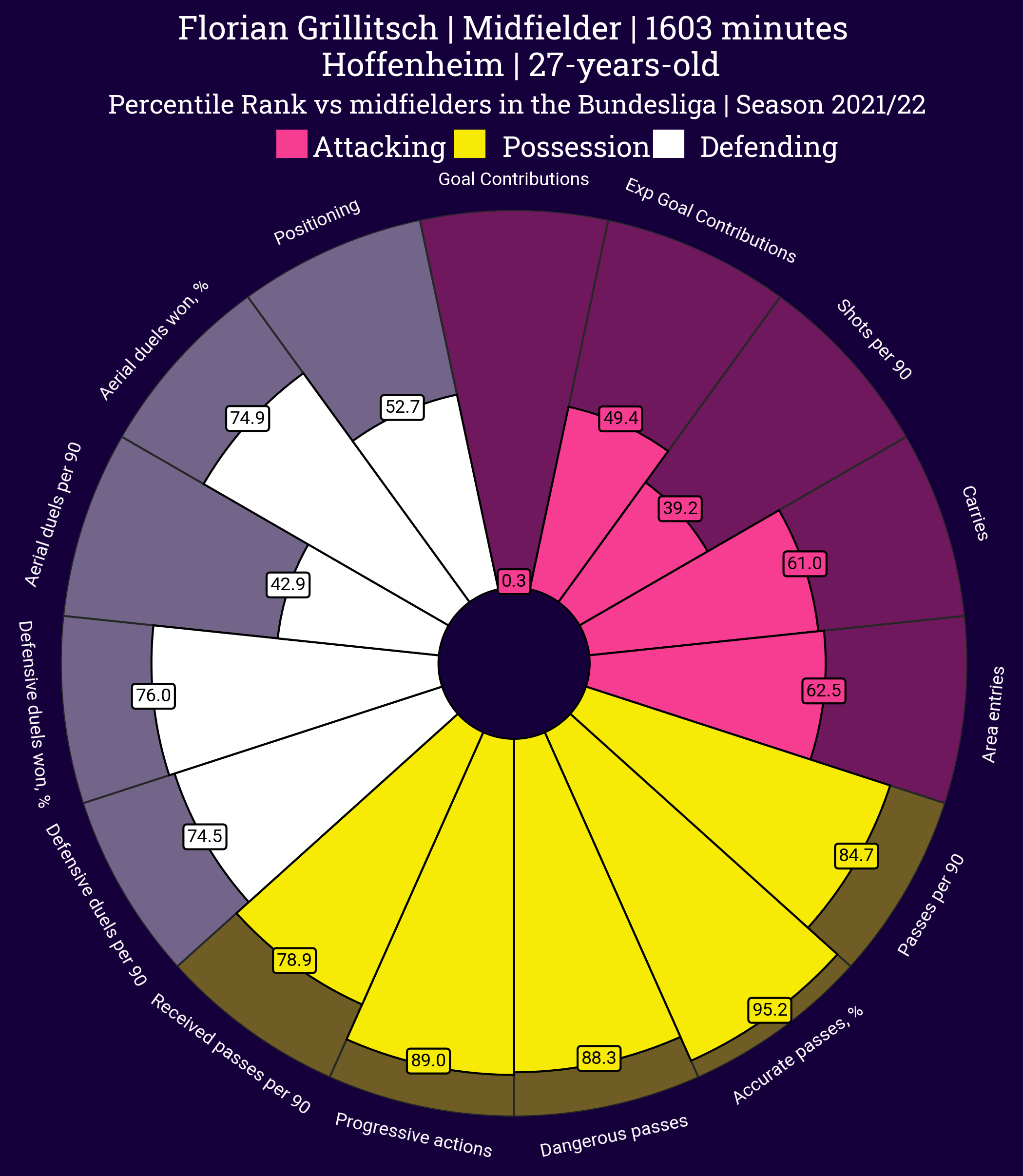 The last deal that we will discuss in this article has the potential to be the smartest of them all as Ajax moved on deadline day to secure the signing of the 27-year-old Austrian international Florian Grillitsch after the expiry of his contract at Hoffenheim. This might seem like an odd deal to have excited us so much as Grillitsch is not a flashy signing and his age, at 27, seems odd given the reputation of Ajax as a team that prioritises youth development.

In Florian Grillitsch, however, Ajax have signed one of the most intelligent and tactically flexible players in the top-five leagues last season. Grillitsch was primarily a defensive midfielder throughout his career. He was a true ‘6’ who sat at the base of the midfield and used his passing range to access all areas of the field.

Last season, we saw Grillitsch moved back to play as a central defender and, again from these positions, his ability on the ball was a real weapon for Hoffenheim. His versatility for Ajax will be a huge boost to their squad especially given the fact that they face so many sides who want to just sit off and defend in deep positions. Against these teams, his passing ability will help Ajax to unlock deep defences.

Florian Grillitsch was actually a product of the youth system at St Polten but he moved as a young player across the border to Werder Bremen. In 2017, Hoffenheim paid a reported £3.6M to secure the signature of the midfielder and Ajax have pulled off a real coup in signing the midfielder on a free transfer. At the time of writing, he has been capped times at senior international level by Austria.

We believe that Grillitsch will become a key player for this youthful Ajax side.

The truth about football is that the process of signing and recruiting players never truly comes to an end. Recruitment departments within club will have barely missed a step into moving on to January now and the smarter clubs are even looking at next summer and beyond.

The four players that we have picked out in this analysis piece represent some interesting pieces of business that we believe will lead to success for their clubs across the rest of this season.