The victory saw Erik ten Hag’s men win their third game in a row, pushing them up to fifth place in the Premier League table. In what was looking like a disastrous start to his reign, the former Ajax manager has now appeared to stop the rot by winning back-to-back away matches for the first time in over a year.

Each passing game is starting to show different imprints of ten Hag’s tactical identity and with the media speculation surrounding Cristiano Ronaldo’s future now over, United can look forward and start aiming to build momentum.

On the opposite bench, Brendan Rodgers and Leicester City’s troubles continue as the defeat now leaves the club winless in five games and rooted to the bottom of the league table. This was the fourth defeat in a row for Leicester, and with the club being restricted in the transfer market this summer, the pressure is now on Rodgers to raise the performance of his players.

This tactical analysis will focus on the key tactics and tactical traits that helped Manchester United earn the victory. We will look at how both teams set up and examine how United’s counterattacks could have led to them winning by a greater margin. Finally, we will look at how Leicester’s defensive frailties are leading to them being too easy to play through. 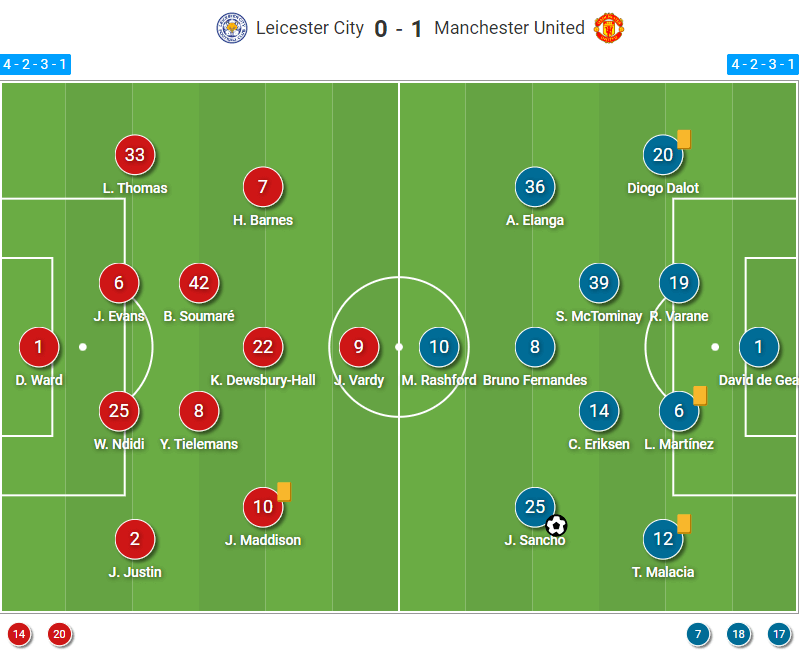 Both Wilfred Ndidi and James Maddison returned to Leicester’s starting eleven after they missed out against Chelsea last Saturday.

Although there was heavy speculation surrounding the future of Youri Tielemans and whether he would remain a Leicester City player, he started the game and has remained with the club.

Erik ten Hag was in a similar position with Ronaldo and his future at the club. With the Portuguese superstar ready and willing to leave the club, they didn’t receive any offers on deadline day, and he started the match as a substitute along with new signing Casemiro. With United playing two games in three days and Arsenal being the next opponent, it was suspected that ten Hag might rotate his team, but he has kept the same starting line-up from Saturday’s win against Southampton.

Both teams lined up in a 4-2-3-1 formation. However, it was clear from early in the game that was just a base formation as out of possession they both set up in a 4-1-4-1 and both aimed to defend high up the pitch, making themselves difficult to play through.

From Manchester United’s perspective, the 4-2-3-1 enables them to accommodate both Christian Eriksen and Bruno Fernandes in the same team without playing a number 6. So far, ten Hag has used the 4-2-3-1 73% of the time this season, but once Casemiro becomes more acquainted with the league and his teammates, it provides ten Hag with the opportunity to be more flexible.

For Leicester City, the 4-2-3-1 formation feels more of a necessity to be able to play all his attacking players. Compared to ren Hag, Rodgers has only used the formation 40% of the time this season but has switched between five other formations during stages in the other four league matches.

The images below show how Rodgers and ten Hag used the same tactics when playing against the ball to support their high defensive structure.  You can see United’s left-back Tyrell Malacia pushes up into midfield alongside Christian Eriksen. This is to provide additional support centrally in case Leicester succeed in playing through United’s defensive shape and get space in between the lines. 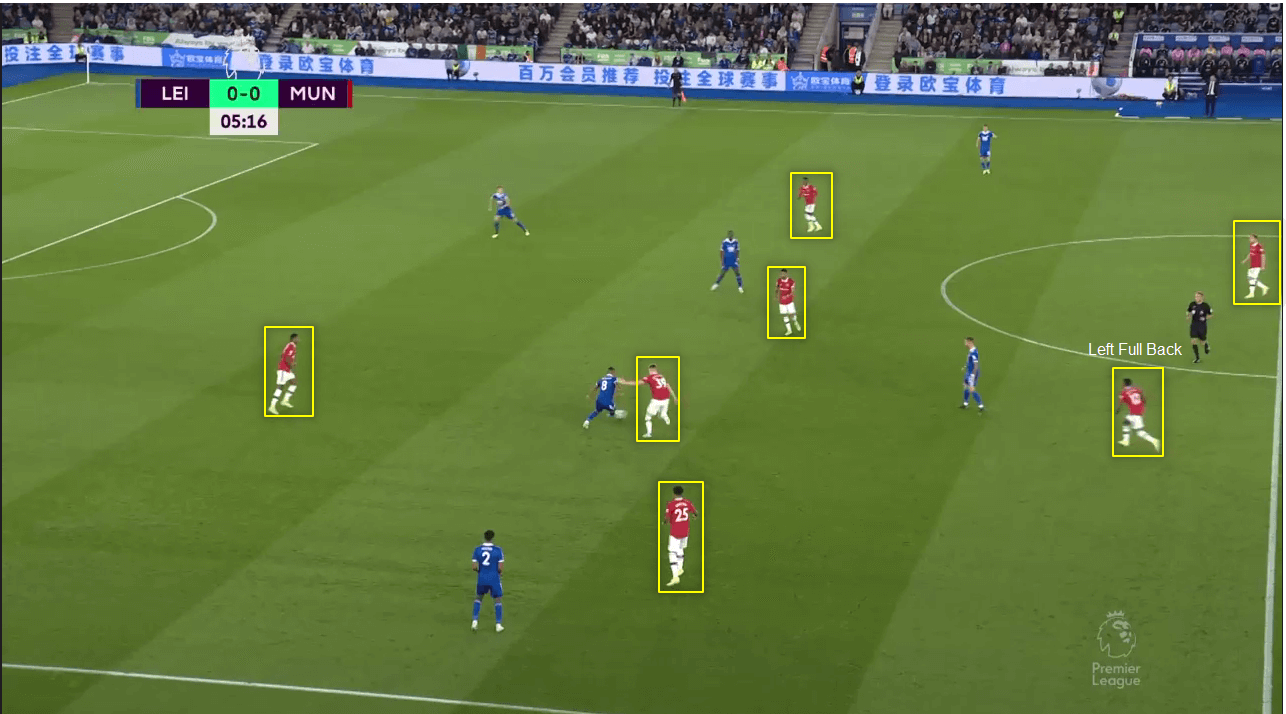 The same goes for Leicester below, you can see how James Justin pushes up alongside Boubakary Soumaré which creates an identical defensive shape to United on the image above. The purpose was the same to provide extra security in the centre of the pitch in case United were to succeed in playing through Leicester’s defensive structure. 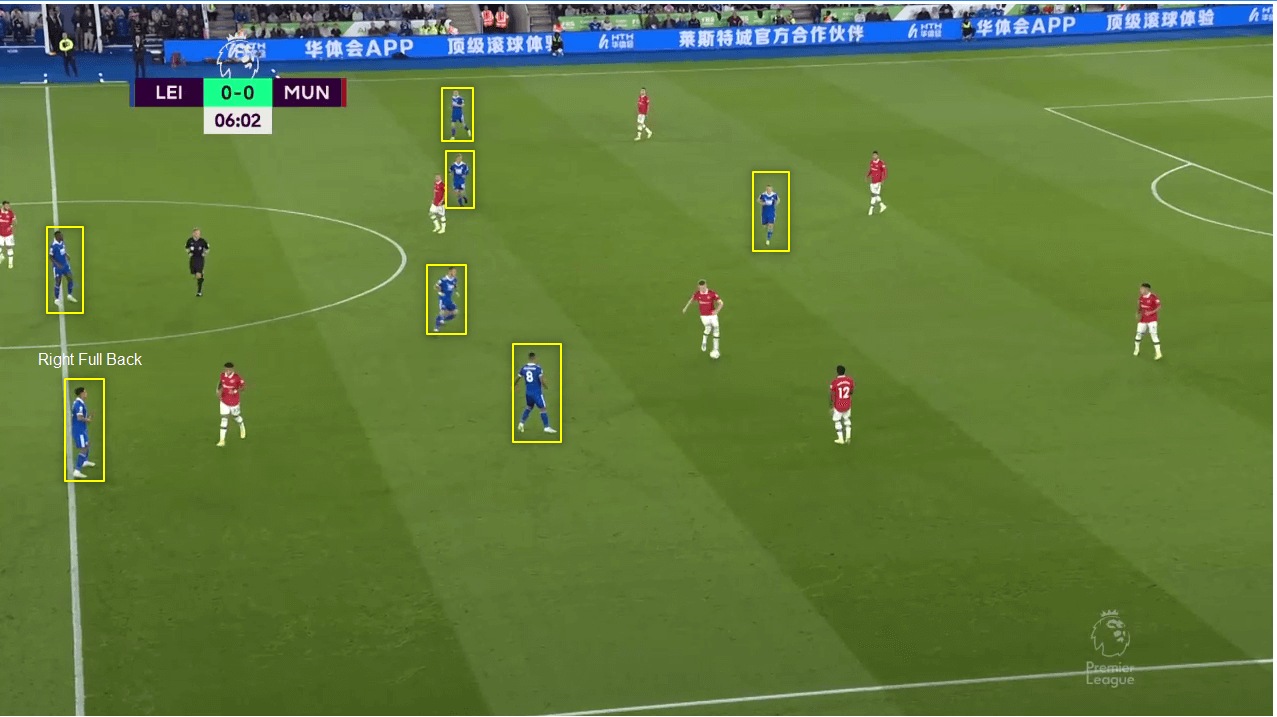 United aimed to keep their shape. They didn’t press Leicester’s back four when they held possession in the defensive third, it was only once the play progressed through to the middle third that United’s press was triggered.

Leicester’s tactics were different. They actively pressed Manchester United’s back four when they were building up with a man-oriented press. Each of their midfielders would leave their defensive line to press the man in possession, creating a 4-4-2 defensive shape.

Leicester’s defensive frailties continued throughout this match.  The defensive structure and set-up that the Foxes used wasn’t solid, aggressive, or organized enough to cope with Manchester United’s quick progressive passing. Their defensive shape was broken too easy by United right throughout the pitch.

The two images below show a passage of play in order eight seconds apart. The sequence shows United building up through their defence. You can see straight away that the Leicester press is not intense or quick enough as James Maddison approaches Tyrell Malacia, but there is no coordination within their pressing structure as Jamie Vardy is not anticipating Malacia playing the ball back to Martinez. At the point Maddison presses, Vardy should be arching his run to block the passing lane from Martinez to Varane, pushing Martinez out wide with the ball and limiting his passing options. 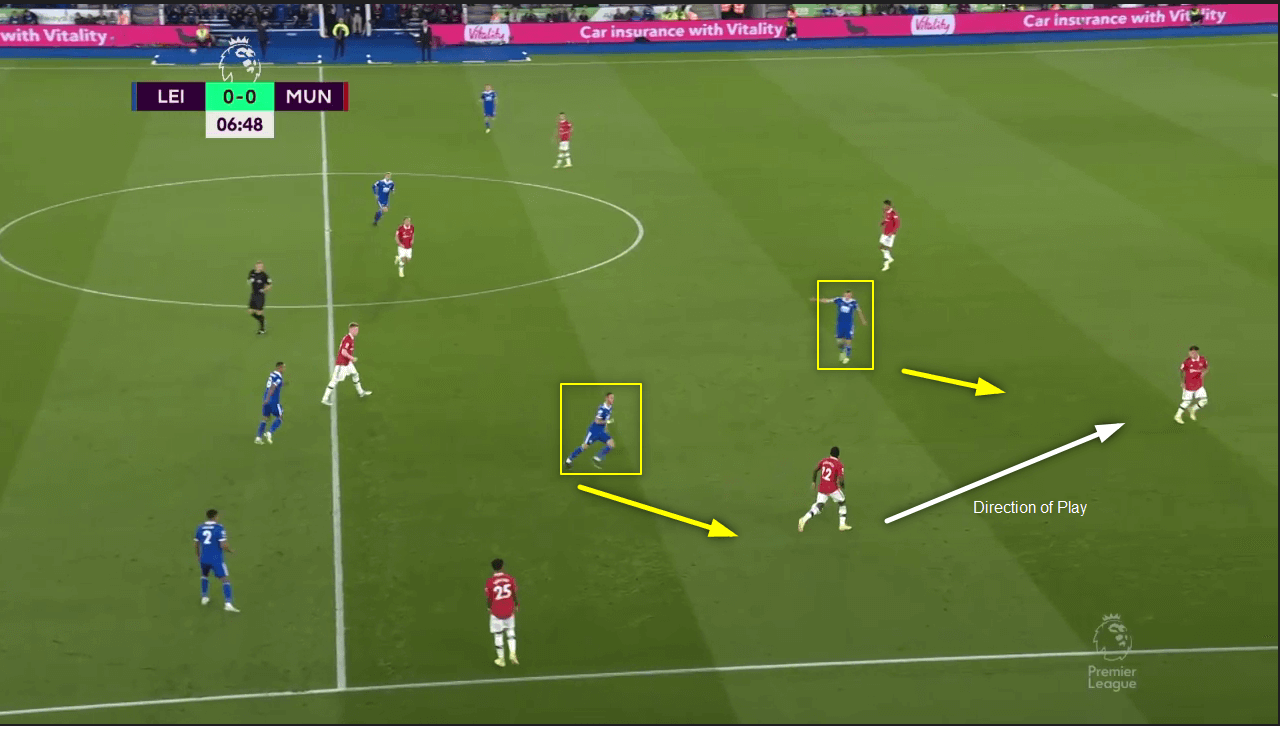 However, this doesn’t happen, and it leads to this below. Martinez plays a forward pass into Bruno Fernandes which breaks Leicester’s lines.

We mentioned earlier in the analysis how Leicester applied a man-oriented press and therefore their 4-1-4-1 defensive shape would switch to a 4-4-2 shape. But because there is no organisation to their press, and it isn’t applied properly, you can see how disjointed the defensive shape becomes as Martinez plays his pass to Fernandes.

United have three players beyond Leicester’s midfield and have created potential overloads down the left-hand side and through the centre. 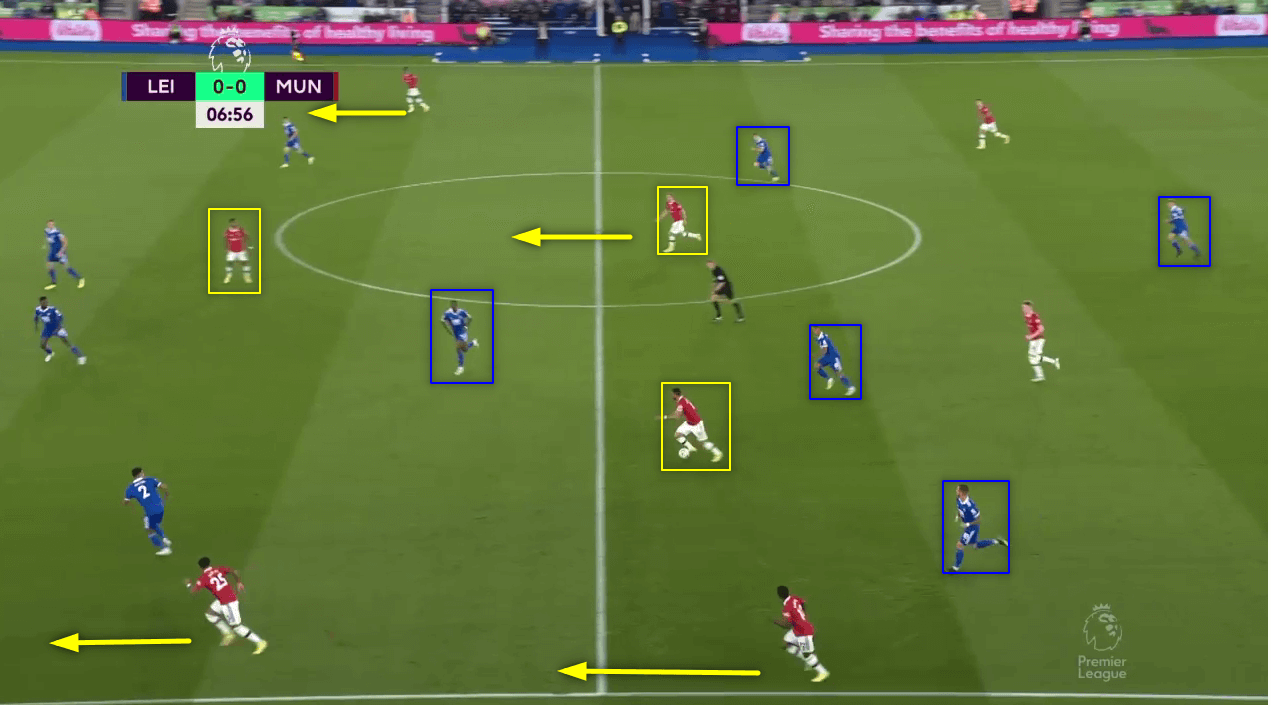 It was when the initial press was applied, that Leicester’s defence became vulnerable. It was clear that either the players are not good enough to press the ball and control the space but they were also not prepared for United’s verticality. 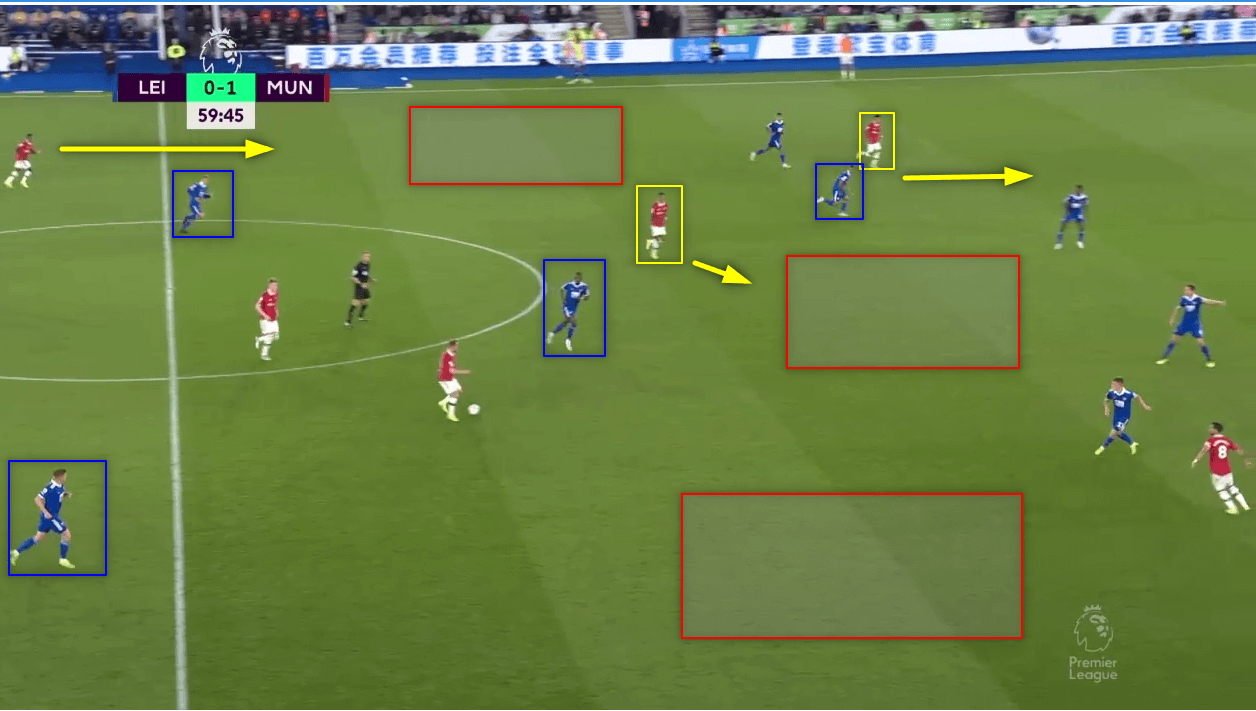 It wasn’t just the defensive shape not being organised that was proving to be an issue for Leicester. It was how many passes it was taking for Manchester United to get into positive areas. As Casemiro receives the ball, he receives this from 1 direct pass from United’s defence.

You can see how much space he is in and how no pressure is being applied on the ball by Leicester.  It will be a huge concern for Brendan Rodgers that a player can hold possession in his team’s half and his midfield holds no shape in front of the defence 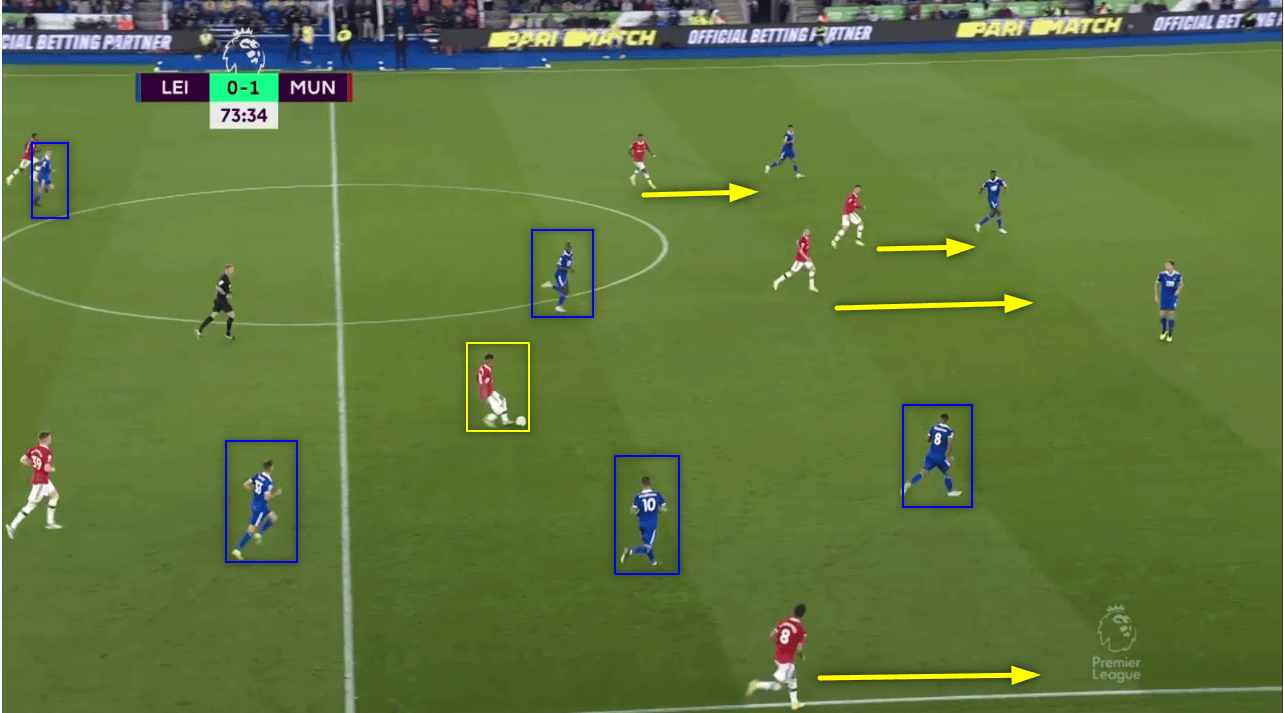 As much as Leicester’s defensive frailties played a role in the outcome of the game, it was Manchester United’s quick transitions and vertical passing game that assisted in Leicester becoming so unorganised defensively.

Whether it be through counterattacking or just progressive play through each third of the pitch, Leicester struggled throughout with how ten Hag’s team turned over the play whilst being in possession. Although a team playing with verticality risks conceding possession more, it was a risk worth taking for United as they were creating opportunities right across Leicester’s defensive third and taking advantage of their defensive vulnerabilities.

The below image shows how United are 1v1 with each of Leicester’s defenders. They have progressed the play down the right-hand side and looked to exploit the space behind the full-back, whilst looking to exploit the space through the centre with Christian Eriksen’s run from midfield. 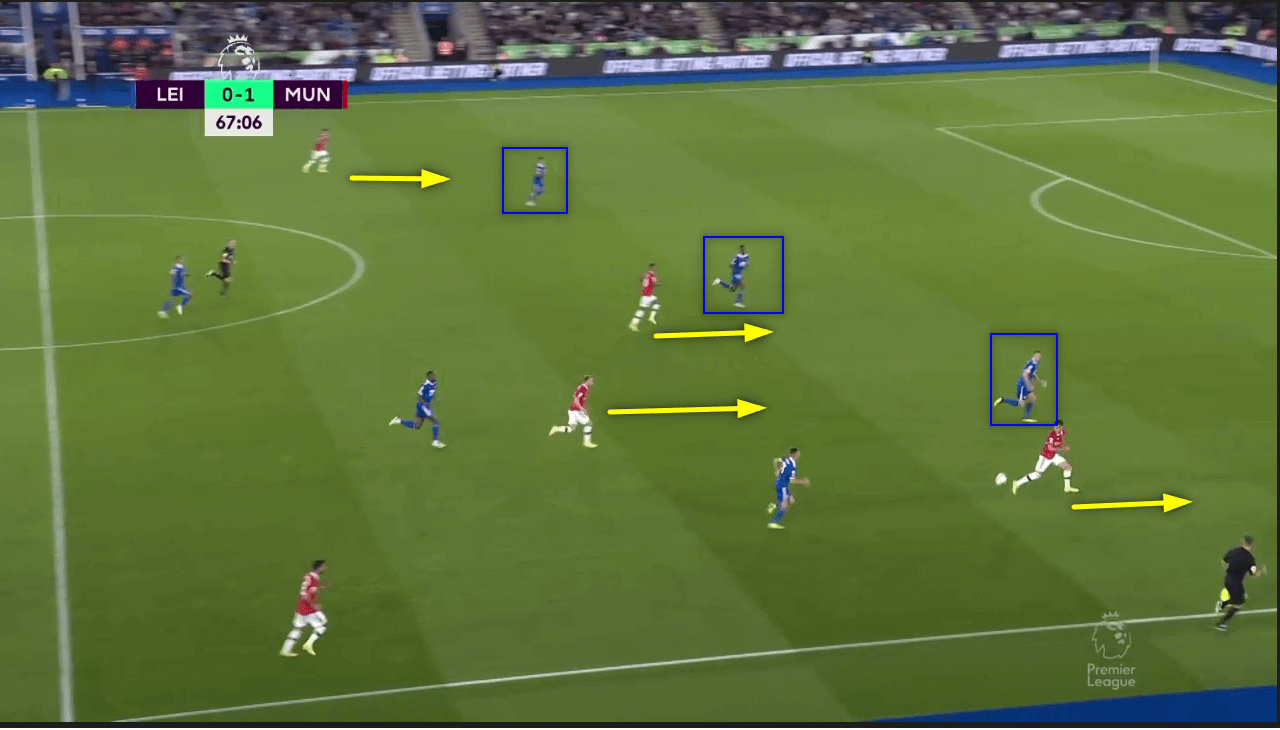 It was a constant theme throughout the second half as Manchester United’s tactics were to draw Leicester in and allow them to have the ball in certain areas as it enabled United greater opportunities and more space to be able to attack due to Leicester not being able to win the ball back effectively.

The attacking play from below isn’t a result of a counterattack, it happens from the United building across the pitch and Leicester ball chasing. They kept creating numerical advantages as they attacked, this is because the off-the-ball movement was also creating problems.

As Rashford pulls away from the ball and onro the outside of Jonny Evans, it means that Wilfred Ndidi can get out to the right to meet the ball because of the space it would create and leave in the centre. Therefore quick runs from midfield in these scenarios are key regardless of whether you get the ball. 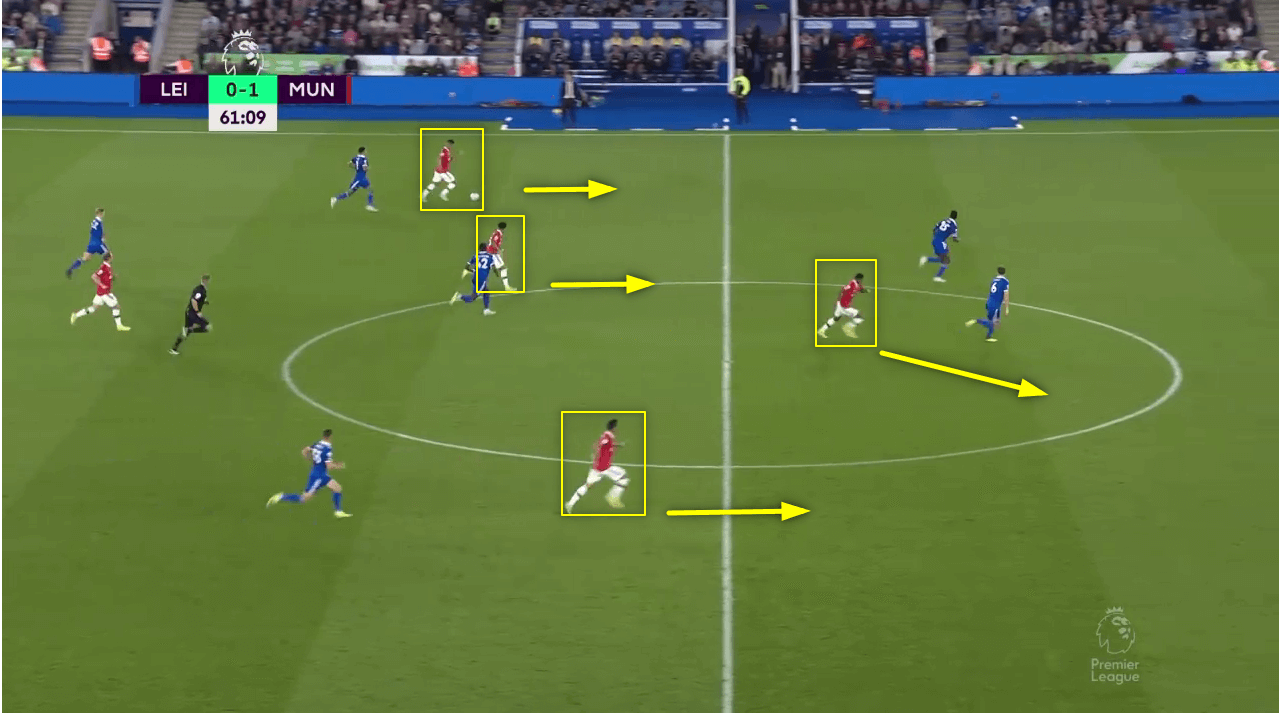 This is another quick turnover from United. Casemiro wins the ball in this instance and straight away plays the ball into the space vacated by Leicester. Once Fernandes receives the pass, he plays in Eriksen and United are 3v2 with Leicester’s centre-backs.

The key to ten Hags’ tactics in this match wasn’t just playing with verticality in possession, it was the movement and how quickly they recognised space to attack. Although they were indecisive in the final third and should have created more clear goal-scoring opportunities, it’s clear that they have been working on attacking transitions on the training pitch.

Casemiro will be fundamental to Manchester United maintaining this style of play under ten Hag. His ability in possession will aid United’s procession with the ball and his ability out of possession will be vital for United’s defensive transitions as they continue to attack in numbers.

That type of influence in this game was clear from the moment he was brought on. His ability to be able to see the play in front of him and progress the play will be hugely beneficial for ten Hag being able to implement his philosophy at the club.

The images below show how he immediately makes himself available to receive the play from the centre-backs, which is ideal during the build-up phase. He then breaks Leicester’s defensive shape with one progressive pass to Eriksen who can attack the space between Leicester City’s defence and midfield. 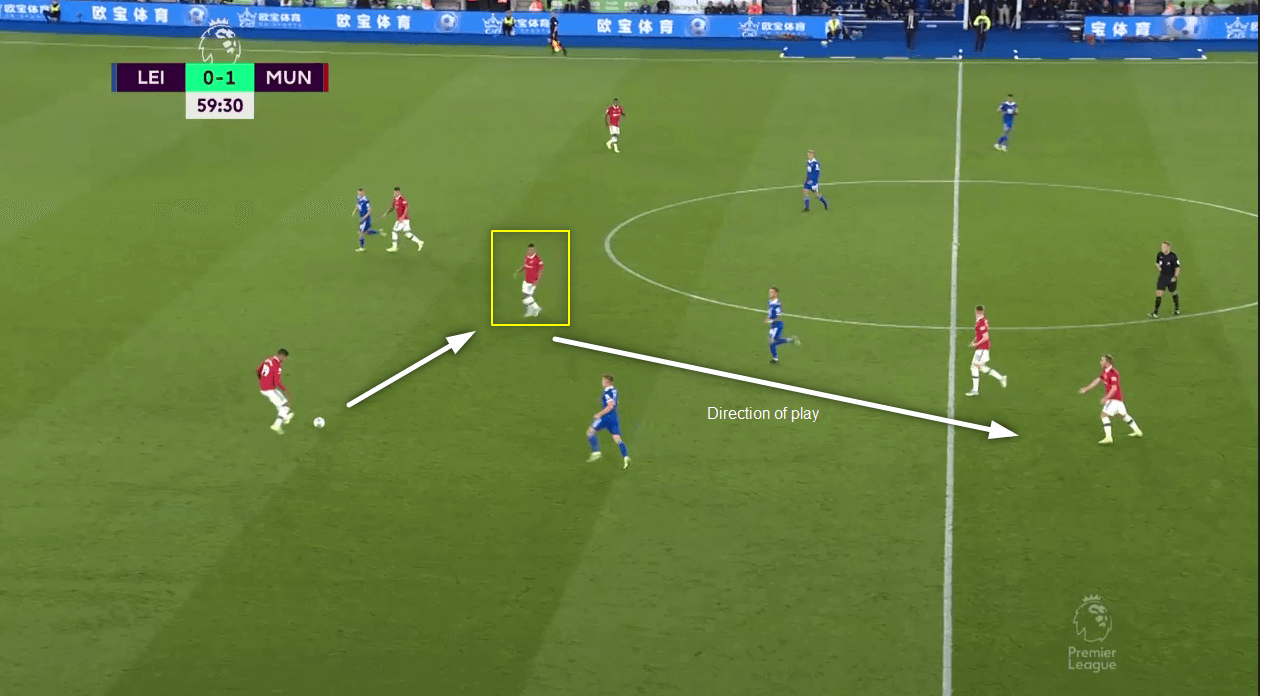 The same happened again seconds later after the play breaks down. United win the ball back McTominay plays the pass to Casemiro and with one first-time pass plays in Eriksen. Each pass takes out a minimum of two players to bypass Leicester’s midfield. 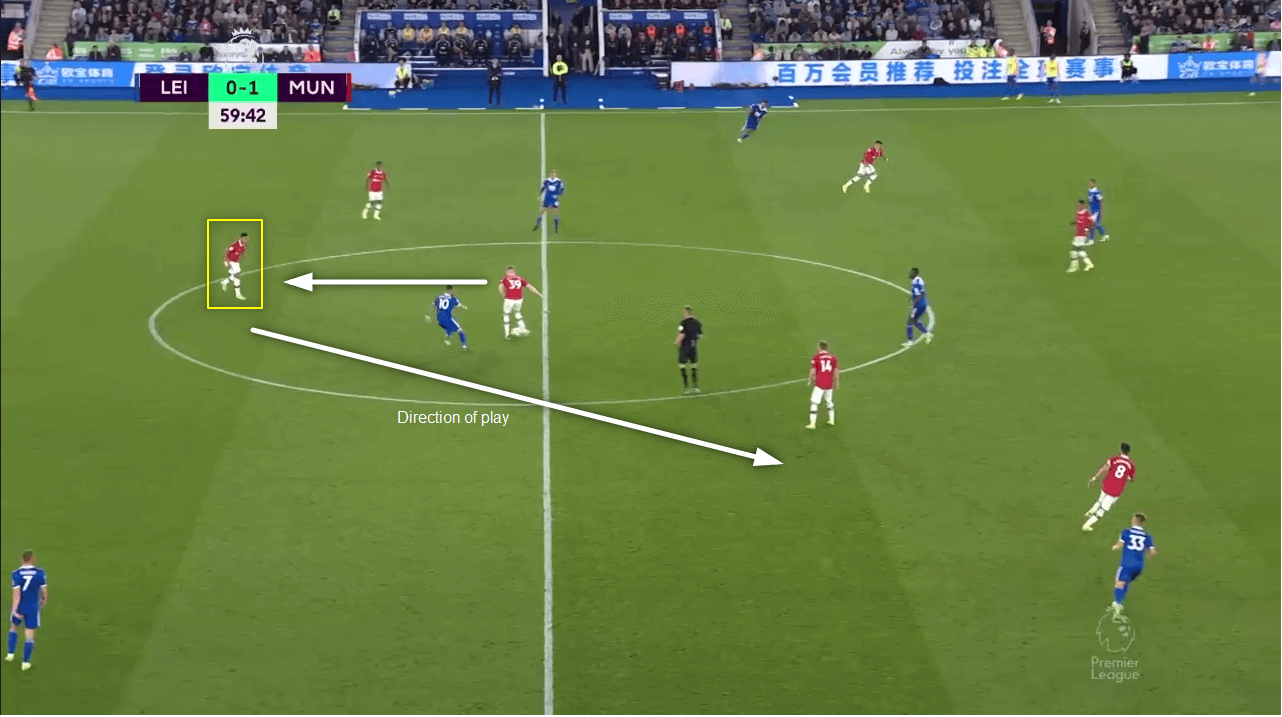 His defensive skills will be equally as important as his passing ability. If United maintain this style of play that revolves around playing a quick vertical passing game and quick attacking transitions, then the play will also be quick turnaround against them, and their attackers could be caught out of position. This would leave the team vulnerable during their defensive transitions.

He is very good at anticipating the play and breaking up attacks in this situation.

This analysis has shown three key tactical components from the match between Leicester City and Manchester United. We have focused on the key tactics implemented by ten Hag and how they helped United get a result.

Although Leicester remained in the game and did create goal-scoring opportunities, the key points we have raised show Leicester have defensive problems Rodgers and his coaching staff have to work on, with United progressing slowly but surely under ten Hag.