Ligue 1 Data Analysis: Are Lille lucky to be on top?

Last couple of weeks on our site you could read data analysis on Premier League, Bundesliga, La Liga, Serie A and this week it is about Ligue 1. Similarly to Serie A and Bundesliga lately there was domination by Juventus and Bayern while in France the club that dominated last years was PSG. They are facing great competition from their rivals in Ligue 1 and this season they will have a tough task to get on top based on the current situation.

Going through this analysis we will see how similar are teams from the middle to bottom part of the table while the top six teams on the table are clearly better than the rest. This analysis contains important data and statistics which will give us better insight in the performance of the clubs from Ligue 1.

The first graph we will analyze consists of created metrics called defensive and offensive performance. Both metrics are in percentage value and they represent the team variance between xG and goals. 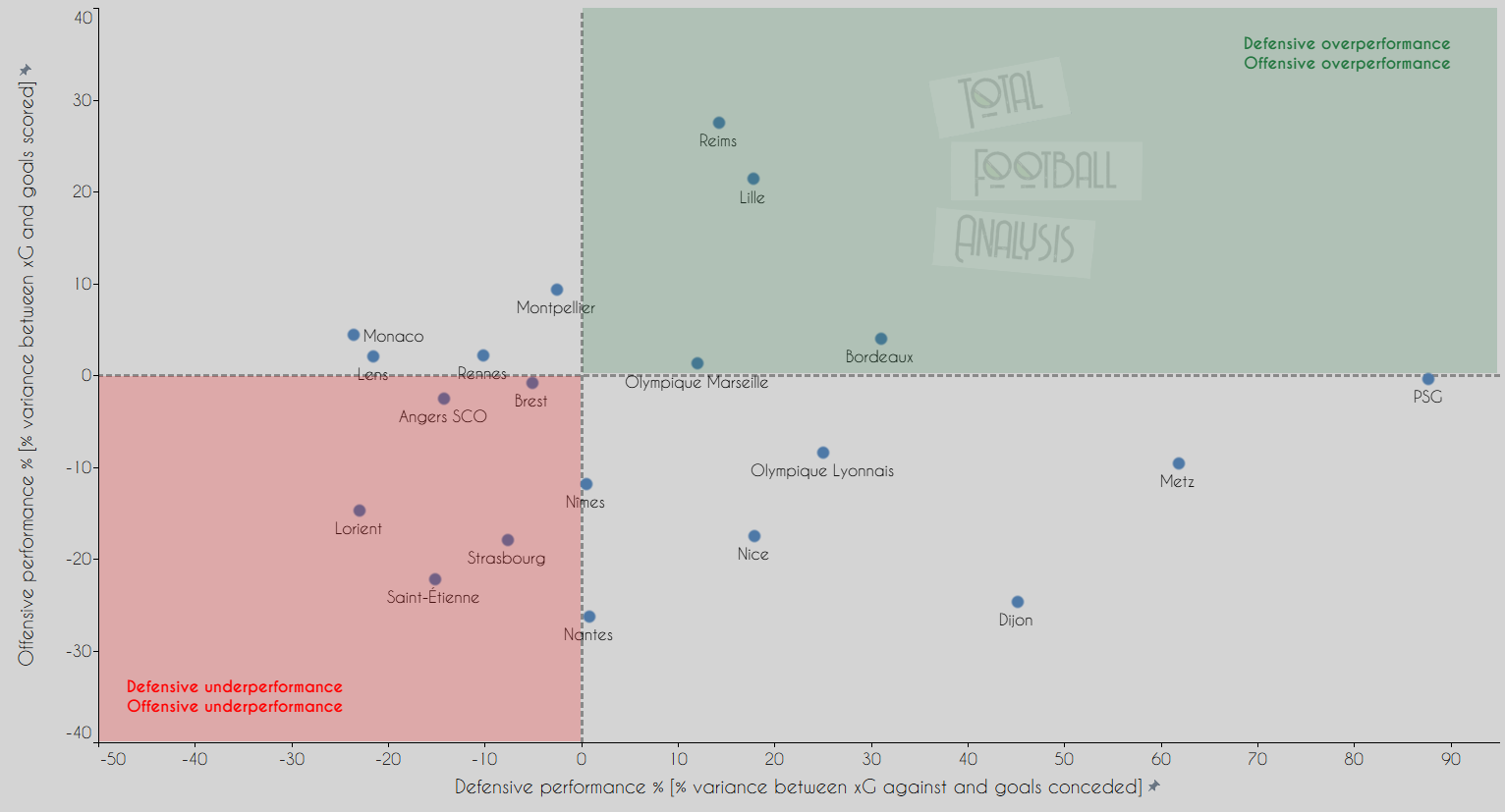 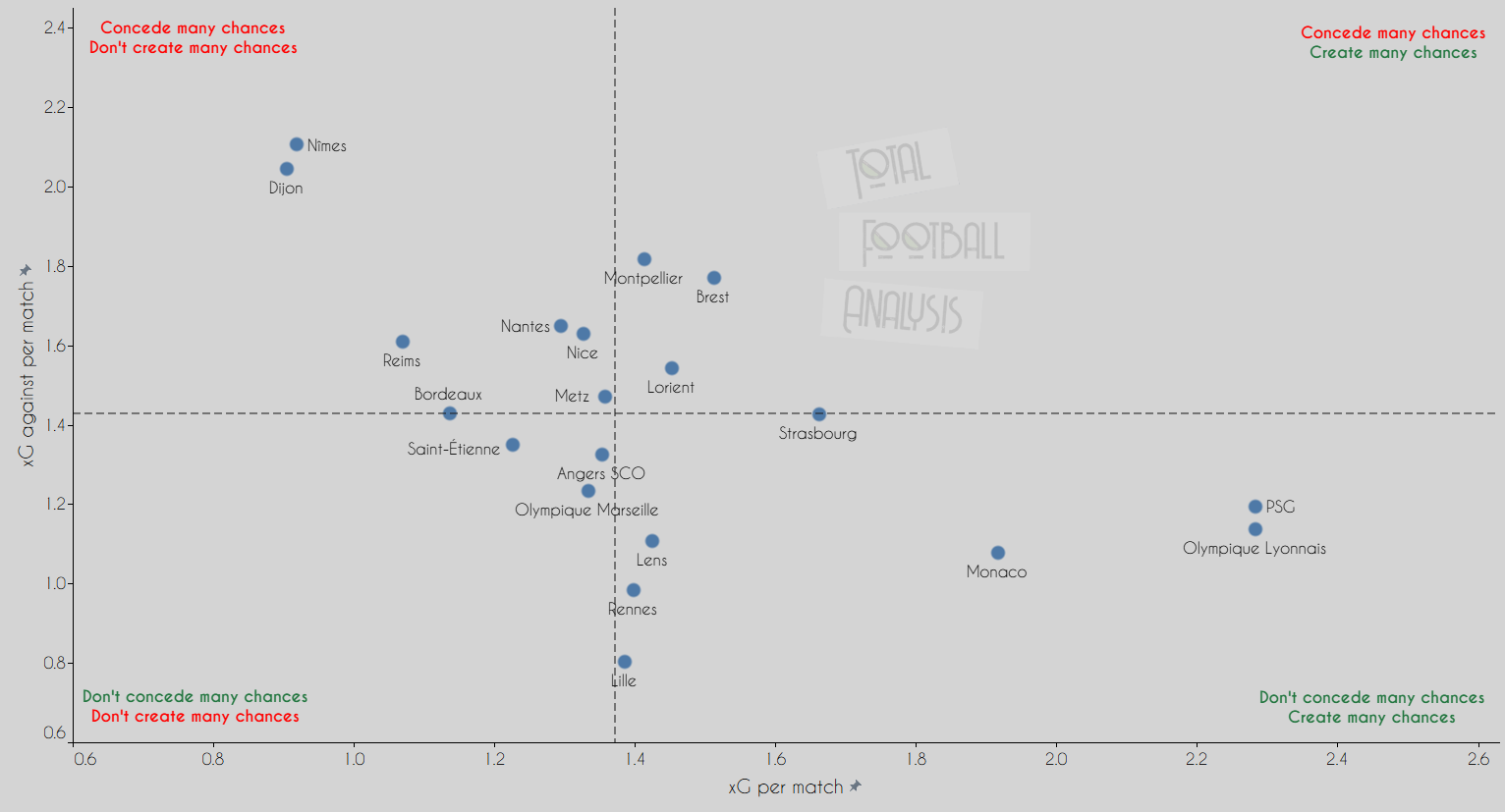 In this graph, we can see that PSG, Lyon and Monaco are clearly better than the rest of the league when it comes to creating chances and getting into promising goalscoring situations. They are fighting for top places with Lille who shows the best defence because they allow the least amount of chances for their opponents based on xG against per 90. Only team who has below one xG against per 90 is Rennes. As we saw on the previous graph PSG is the biggest defensive overperformer and they are the best in conceded goals conceding only 14 goals compared to Lille’s 15 goals which is 2nd best in the league.  Last two teams on the table are Nimes and Dijon who are clearly the worst teams in the league, only teams that are creating less than one xG per match and allowing more than two xG against per match. Montpellier and Brest are playing entertaining matches and they allow a lot of high-quality chances for their opponents while also creating an above-average number of chances. On Brest matches there is 3.82 goals on average per match while on Montpellier matches there is 3.35 goals on average per match which is surely exciting for neutral fans to watch.

In this section, we will take a detailed look into teams shooting and passing tendencies, while also analysing how dangerous they are in set-pieces. First we will take a look how often teams shoot and what is their average shooting distance. 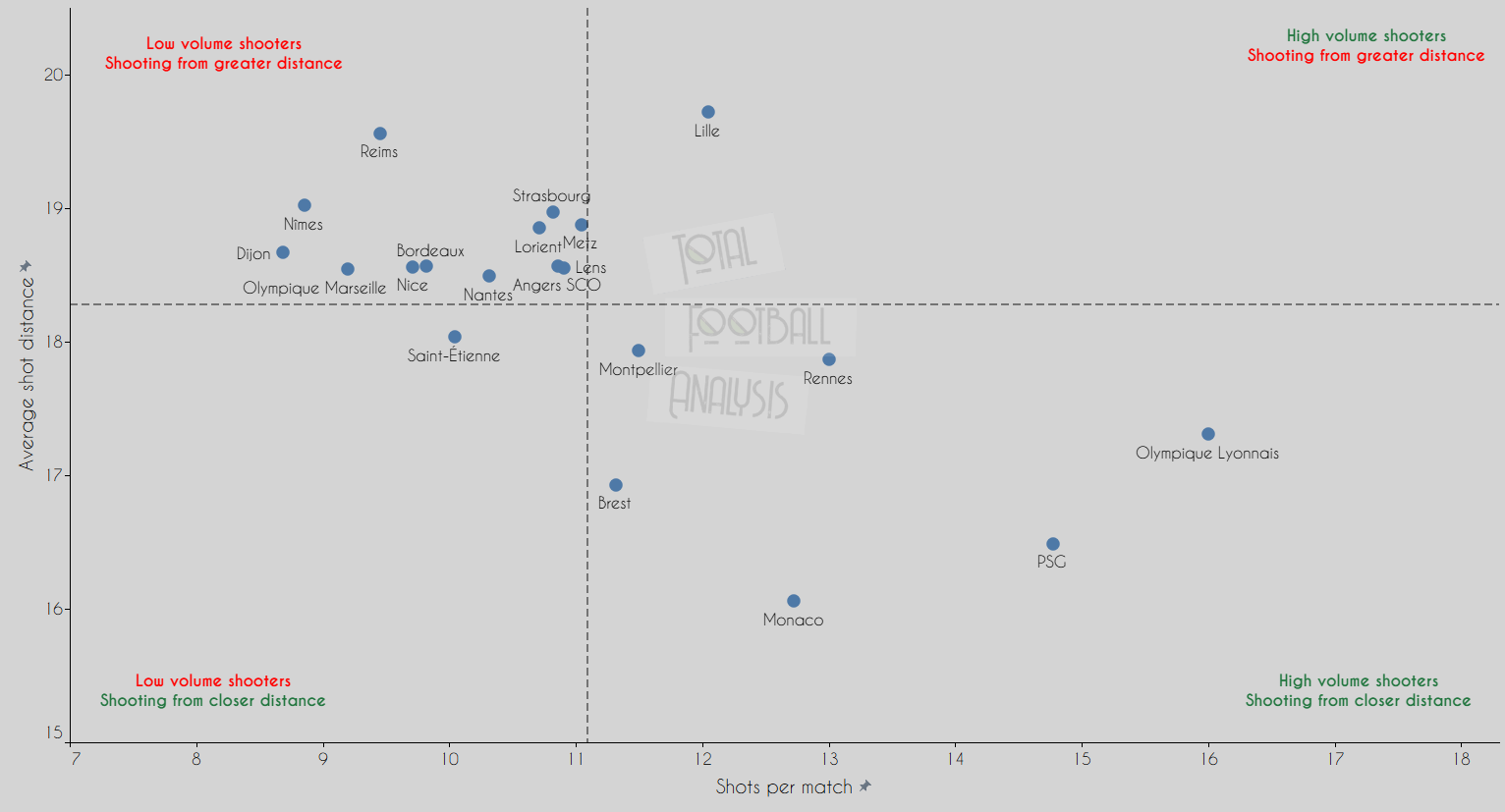 When it comes to shots it is not surprising to see teams like Lyon, PSG and Monaco being one of the frequent shooting teams in the league. Monaco and PSG shoot from the closest distance compared to the others. League leaders Lille show why they are overperforming in the attack because they are the team that shoots from biggest average distance in the league which is impressive given their efficiency, but also concerning in the long-term. Because of the big separation from Lyon, PSG, Monaco and Rennes there are 12 teams that are below average in both metrics. It is concerning for those teams that they shoot less than 11 times per match and from a greater distance than 18 metres. It could be said that apart from the top half teams’ others don’t create enough to shoot from closer distance or they are just not patient enough and attempt shots from long-range distances.

On the next graph we will evaluate the passing tendencies of Ligue 1 teams. It will show us which teams are more direct and which teams tend to play more positional football. Size of the circle represents the average possession in %. 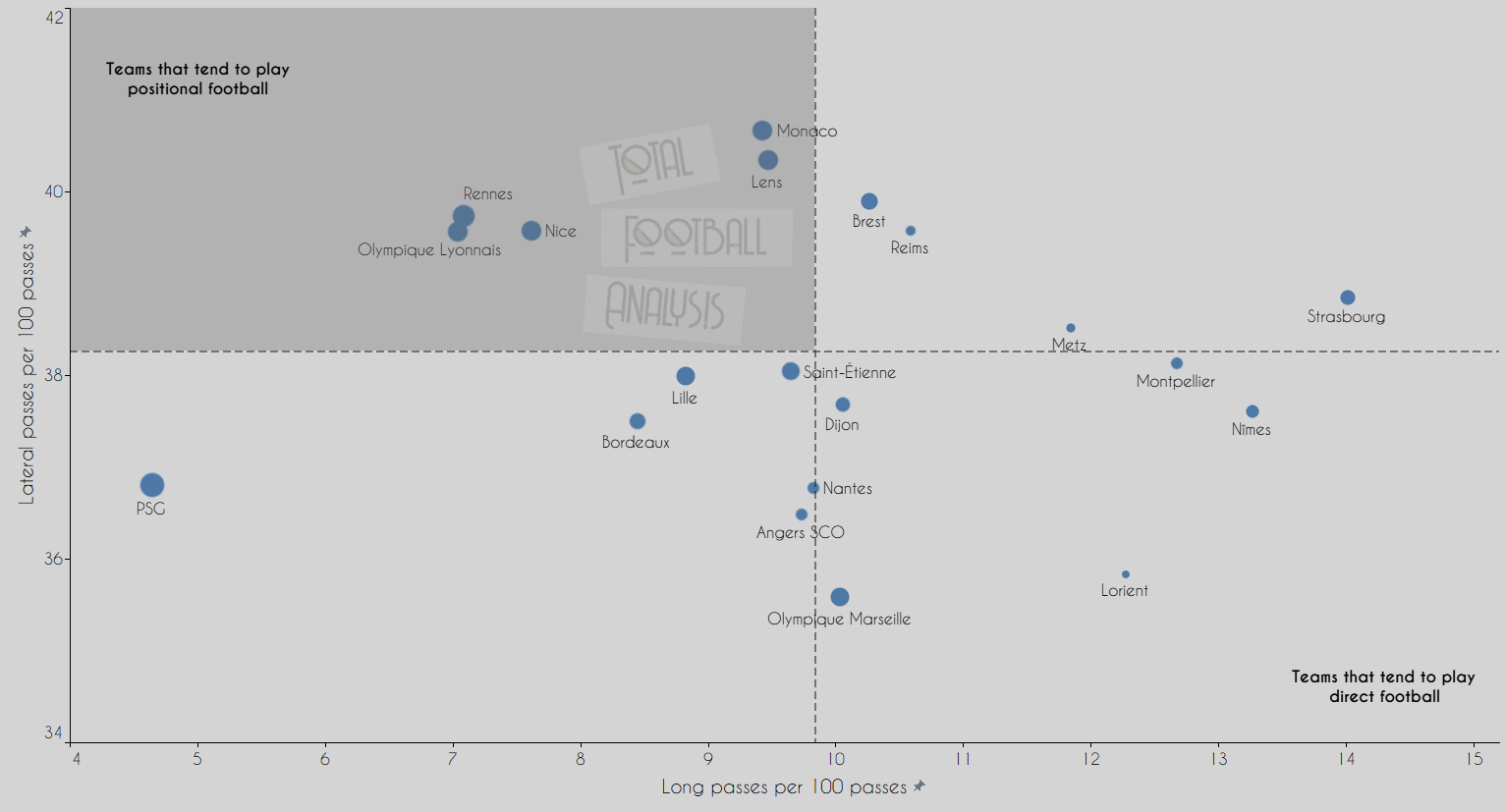 In this graph we can see that PSG is having high possession, but they are not playing too many lateral passes and they try to be more progressive with the ball with a tendency to attack opponents without giving them too much time to prepare for their attack. Lyon, Rennes and Nice look like the teams that tend to be more positional and patient with the ball when in possession, while Monaco and Lens are in that group as well with slight tendency to attempt more long passes. Lorient is clearly the most direct team with lowest average ball possession in the league. Marseille seems like the most impatient team in the league with the lowest tendency to play laterally.

The last graph in this section will show us how dangerous are teams in the set-pieces. 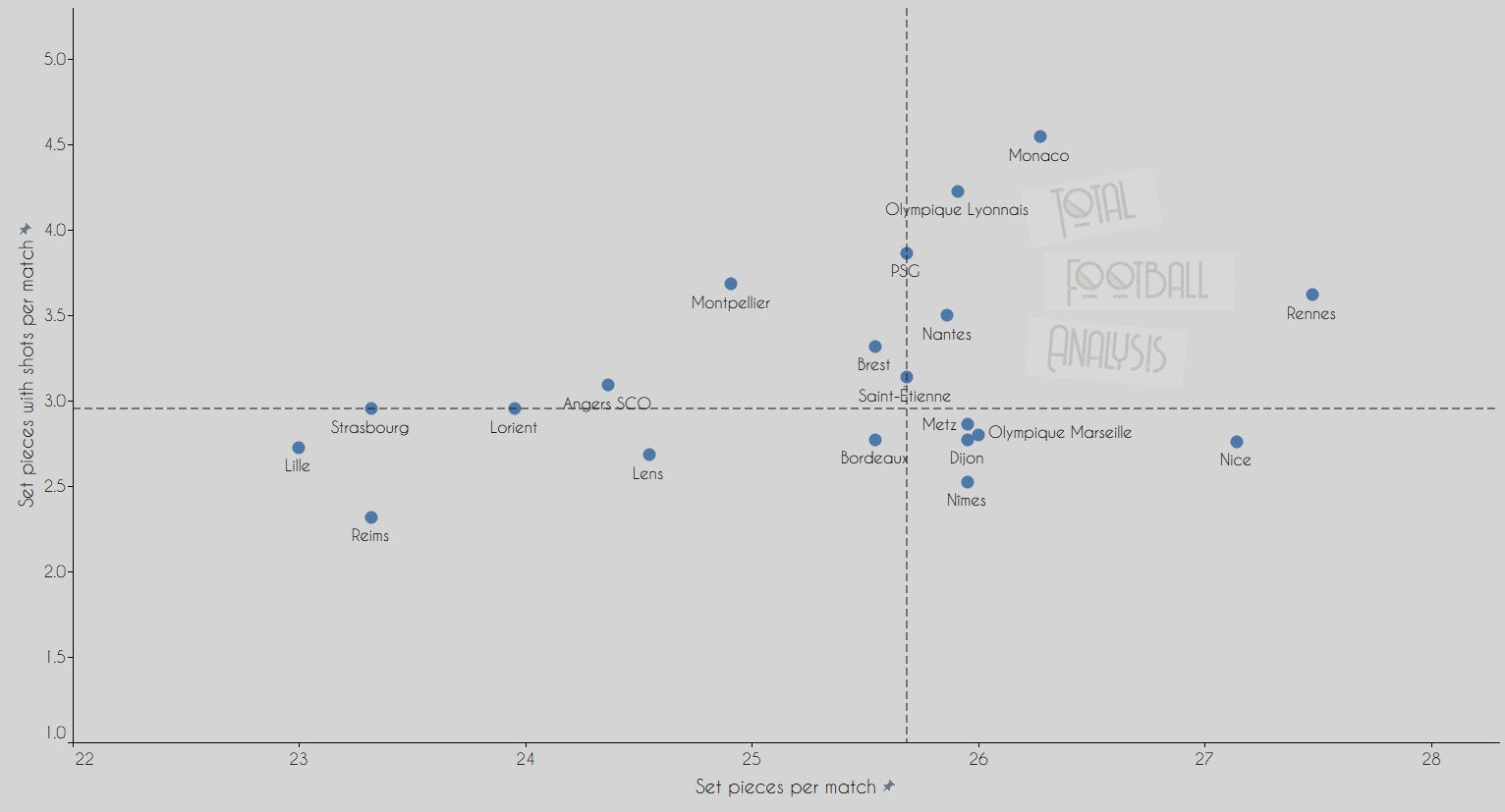 In this section we saw pretty strong numbers by Lyon, PSG and Monaco who all show they are an attacking force in the league.

In the last section, we will take a look into teams success in duels and also their tendency to press higher and actively trying to regain possession. The graph below shows how successful are teams in defensive duels and aerial duels in percentage. 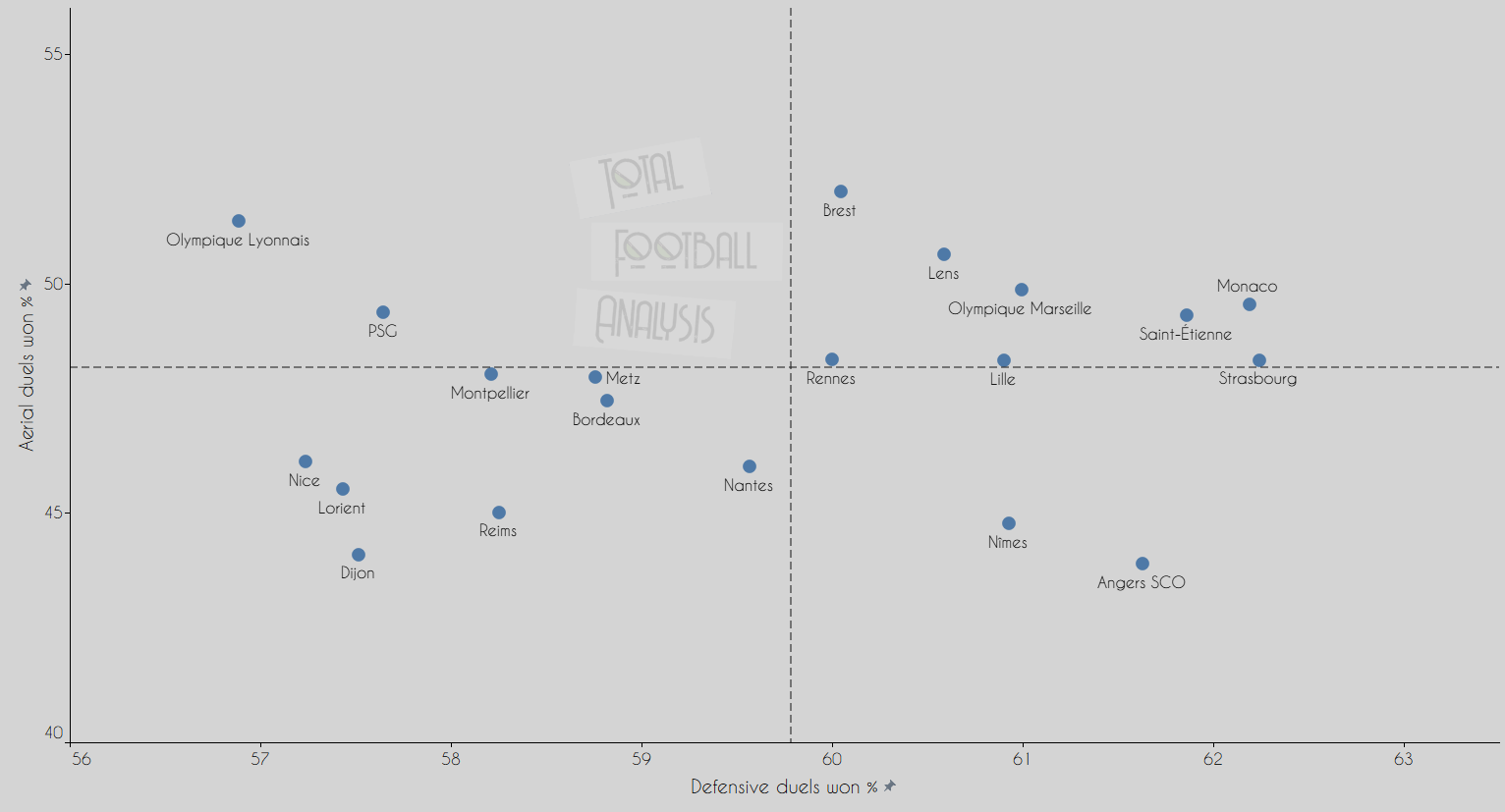 On this graph we can see that Lyon and PSG are the only teams who are below average in defensive duels success rate and above average in aerial duels success rate. It is interesting that Lyon is the least successful team in defensive duels won % while being 2nd best in aerial duels won %. Monaco and Lille are above average in both metrics accompanied by Strasbourg, Saint-Etienne, Marseille, Lens, Brest and Rennes. We can see that on this graph there is no pattern based on league position like it was the case for most of the attacking-oriented graphs which shows that the main difference in the league is in the offensive quality between the clubs. 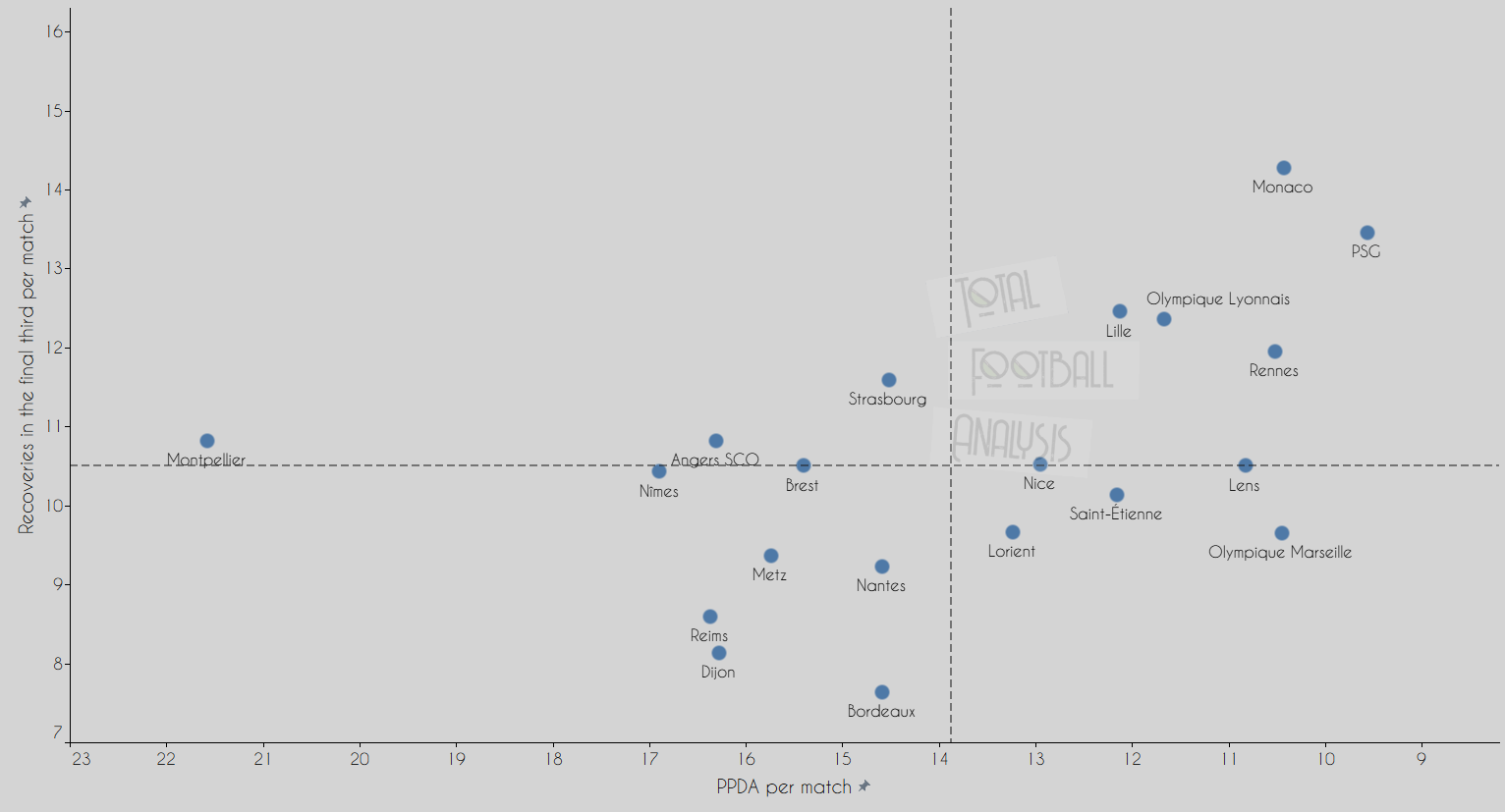 Based on the defensive metrics we can conclude that Monaco and Lille qualities stand out because they are above average in both graphs.

Lille defensive qualities are on a high level and it is the biggest reason they are on the top, along with overperformance in the attack. It would be harsh to conclude that they are lucky to be on top because they showed constant performances which could be decisive if they are able to keep it on that level. Monaco and Lyon shouldn’t be ignored as well given their strong performances lately, especially Monaco who is unbeaten in the last eight league matches with seven wins and one draw. Nimes and Dijon performances indicate that they are on their way to Ligue 2 showing abysmal numbers both defensively and offensively, which is hard to overcome. It is a little concerning for the quality of the league to see such difference in offensive quality between 6-7 teams and the rest of the league. However, battle at the top will bring us an exciting few months in the Ligue 1 and it will be interesting to see can Pochettino bring the best from PSG squad in their push for another title.