Like many previous Bundesliga seasons, many people made predictions at the start of the season that Bayern Munich will win the title. Given the squad they have at their disposal it is not surprising that they are the favourites for the Bundesliga title, but also that they are one of the main favourites to win the Champions League to follow up last season’s success. This analysis, however, will show us why Bayern can’t relax too much like in previous seasons while also showing that Bundesliga teams perform well in European competitions for a reason. All the Bundesliga teams that reached the group phase of the Champions League and Europa League went qualified to the knockout phase this season.

Through this data analysis, we will take a look at the numbers of the Bundesliga clubs and compare them in different statistics

The first graph we will analyze consists of created metrics called defensive and offensive performance. Both metrics are in percentage and they represent the team variance between xG and goals. 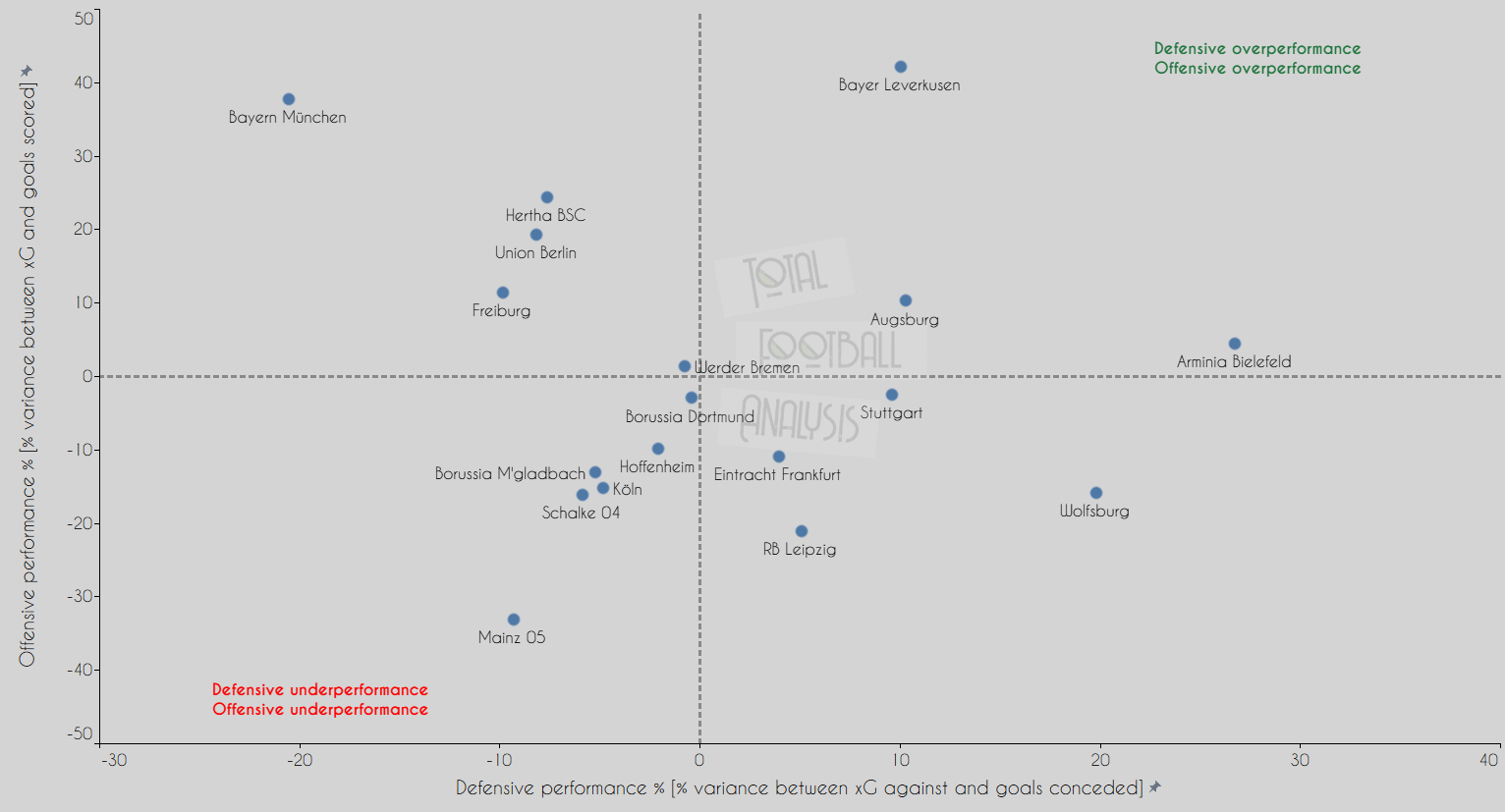 When we talk about teams who overperform their expected goal values, on this graph it is clear that Bayer Leverkusen are the biggest overperformer. Leverkusen are 1st for offensive performance % and 4th for defensive performance %. The other two teams who overperform in both directions are Arminia Bielefeld and Augsburg who are both in the lower part of the table. Even though Arminia are the 15th placed team, they have conceded less than expected and thus big compliments should go in the direction of their goalkeeper Ortega Moreno. Mainz is the biggest underperformer in the league and it is not surprising that they are 17th on the table. Schalke 04 and Köln are in that underperforming bracket s well and they are in 18th and 16th place on the table respectively. It is interesting to find Borussia Mönchengladbach and Hoffenheim as underperformers in the Bundesliga given their strong performances in European competitions this season. Both teams should perform better than they currently do based on their playing squad. Bayern are the 2nd biggest offensive performer and the biggest underperformer in terms of their defence. Their matches often end with a lot of goals on both sides and it is clear that they have certain problems in defence and that Manuel Neuer is in bad form this season. Second-placed RB Leipzig are the 2nd biggest offensive underperformer which says a lot about Timo Werner’s importance for them, but it also looks like Werner is missing RB Leipzig as well, given his poor start at Chelsea. It seems that Werder Bremen and Borussia Dortmund are finding themselves close to what was expected from them based on the expected goals model. 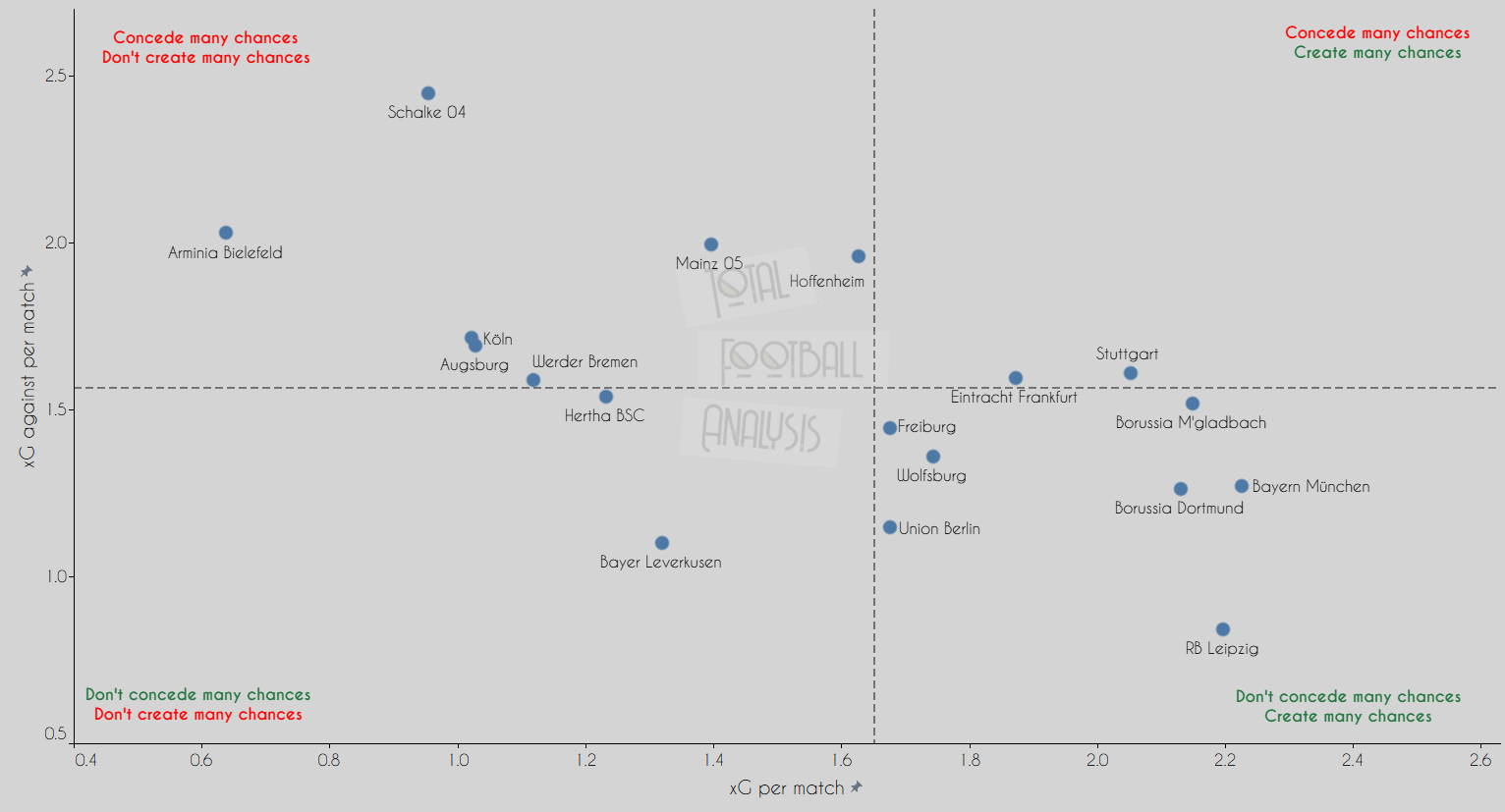 Based on this graph RB Leipzig are clearly performing the best in the league and they have the best defence in the league as well, being the only team that allow below one xG against per match. What is concerning for them is that they are creating the 2nd largest amount of xG per match just behind Bayern but have scored 20 goals fewer than Bayern. Finishing is their main enemy so far and if they start converting chances more often they could make a push for a title. We can see that Schalke 04 and Arminia are the worst teams based on these two metrics. It is clear why Leverkusen are the biggest attacking overperformer because they create almost one xG per match less than RB Leipzig but have managed to score two more than them.

In this section, we will take a detailed look into teams’ shooting and passing tendencies, while also analysing how dangerous they are from set-pieces. First we will take a look at how often teams shoot and what is their average shooting distance. 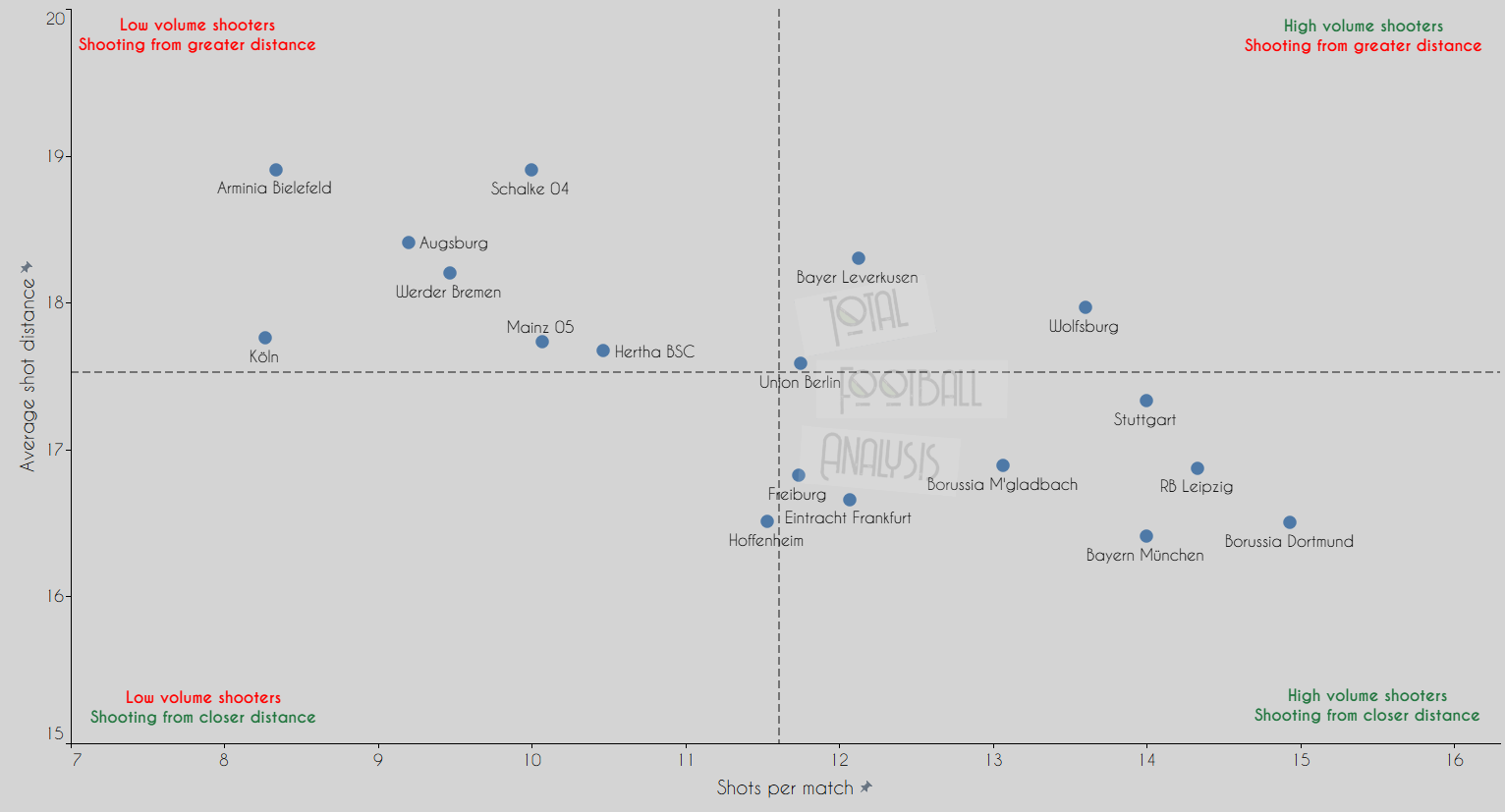 There is no surprise here that teams who have the highest xG per match are the teams who shoot the most. Dortmund are the only team which shoots more than 15 times per match and Bayern are the team which shoots from the closest distance compared to the other teams in the league. Teams that are shooting less and mostly from greater distances are the teams that occupy the lower half of the table. It is clear why Arminia are the lowest-scoring team in the league – they have scored only 10 goals and we can’t be surprised given they are shooting just slightly above 8 times per match and from the furthest distance compared to the other clubs. One of the reasons why Leverkusen have low xG per match is because they often shoot from greater distances; however they have showed quality finishing and scored some low-quality chances which led to overperformance in the attack.

On the next graph we will evaluate passing tendencies and which teams are more direct and which teams tend to play more positional football. The size of the circle represents the average possession in %. 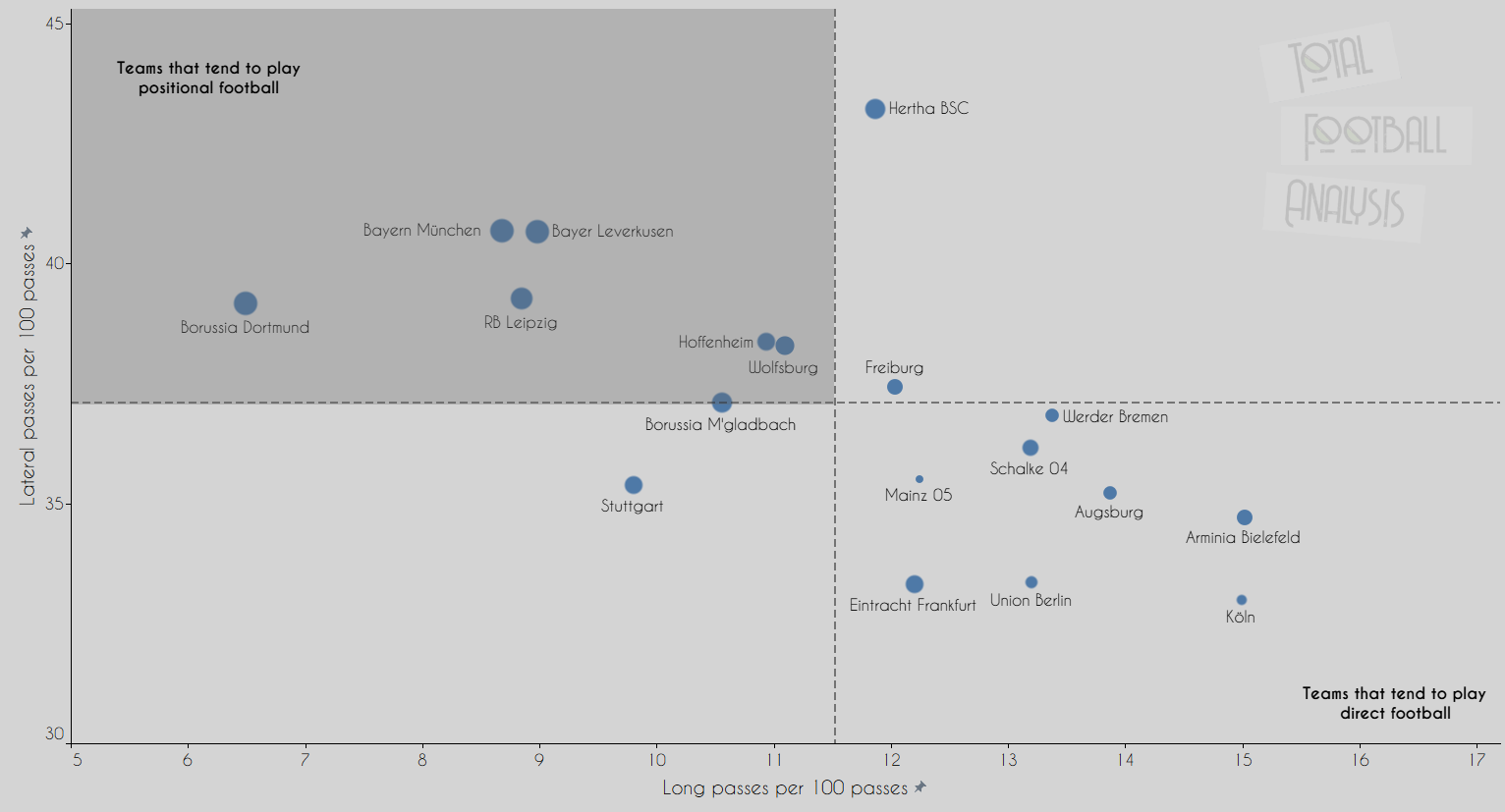 What we can see here is that Dortmund are a team that avoids long passes and tend to play patient attacks with more short and lateral passes. The top three teams in the league – Bayern, Leipzig and Leverkusen are really similar on this graph and it looks like they prefer a similar style of play. Union Berlin and Eintracht Frankfurt are two of the teams that tend to play direct football and tend to start counter-attacks whenever it is possible. Both of those teams are pretty successful in their style given their position on the table. Köln and Arminia show the highest tendency to attempt long passes and play directly. One anomaly on this graph are Hertha, since they are above average in both metrics – they tend to attempt the highest number of lateral passes per 100 passes which shows that they lack directness and creativity if we take into account their xG per match and league position.

The last graph in this section will show us how dangerous teams are from set-pieces. 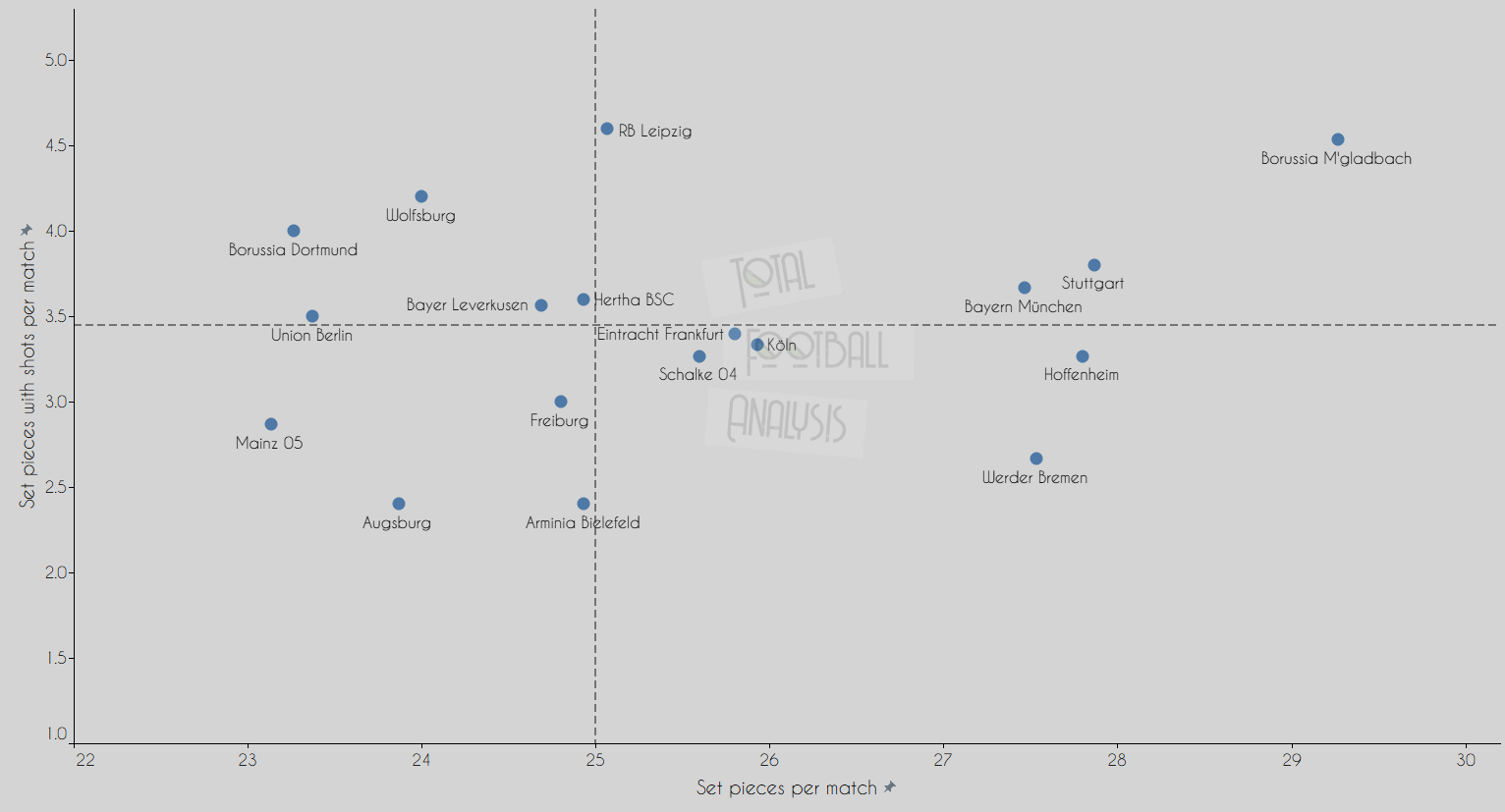 Gladbach and Leipzig are the only teams that attempt more than 4.5 shots after set-pieces per match, but we can label Leipzig as the most dangerous team from set-pieces because they take four set-pieces fewer than Gladbach per match but have scored 6 goals after set-pieces this season. Leverkusen and Union Berlin have scored 10 and 9 respectively which is surely one of the reasons why they are so high on the league table.

In the last section, we will take a look into teams’ success in duels and also their tendency to press higher and actively try to regain possession. The graph below shows how successful teams are in defensive duels and aerial duels in percentage. 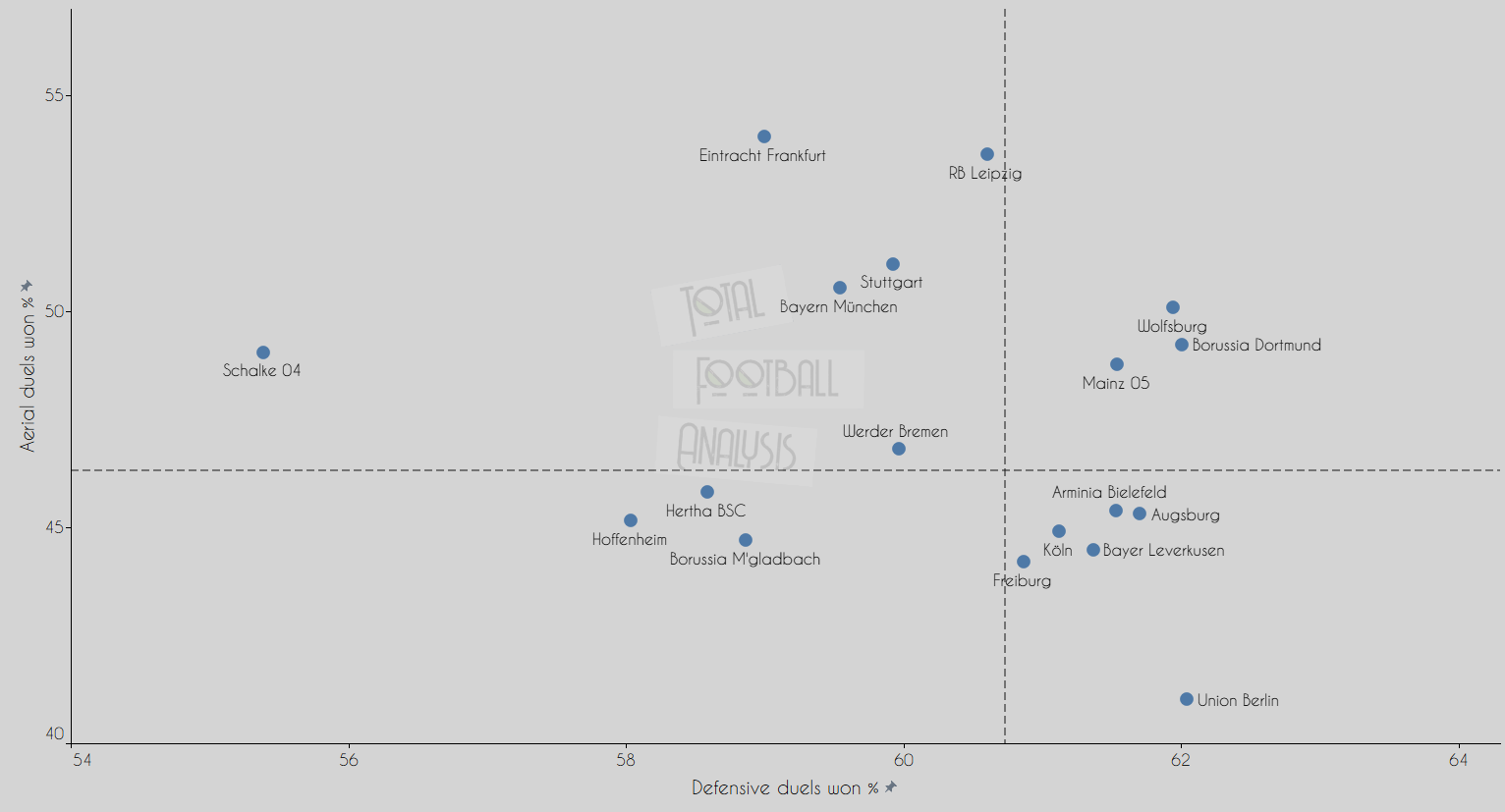 Three teams are above average for both metrics: Wolfsburg, Dortmund and Mainz 05. Clearly the worst team for defensive duels are Schalke 04 and it is not surprising why they are the worst defence in the league, having conceding 42 goals in 16 matches. Hoffenheim, Hertha and Gladbach are below average for both metrics and all three teams are performing below expectations. There could be a connection here because they all allow 1.5 xG against per match which is a high amount of quality chances for their opponents. Leipzig and Eintracht Frankfurt win the most aerial duels while Union Berlin win the least amount of their aerial duels, however they have the highest success rate for defensive duels in the league. 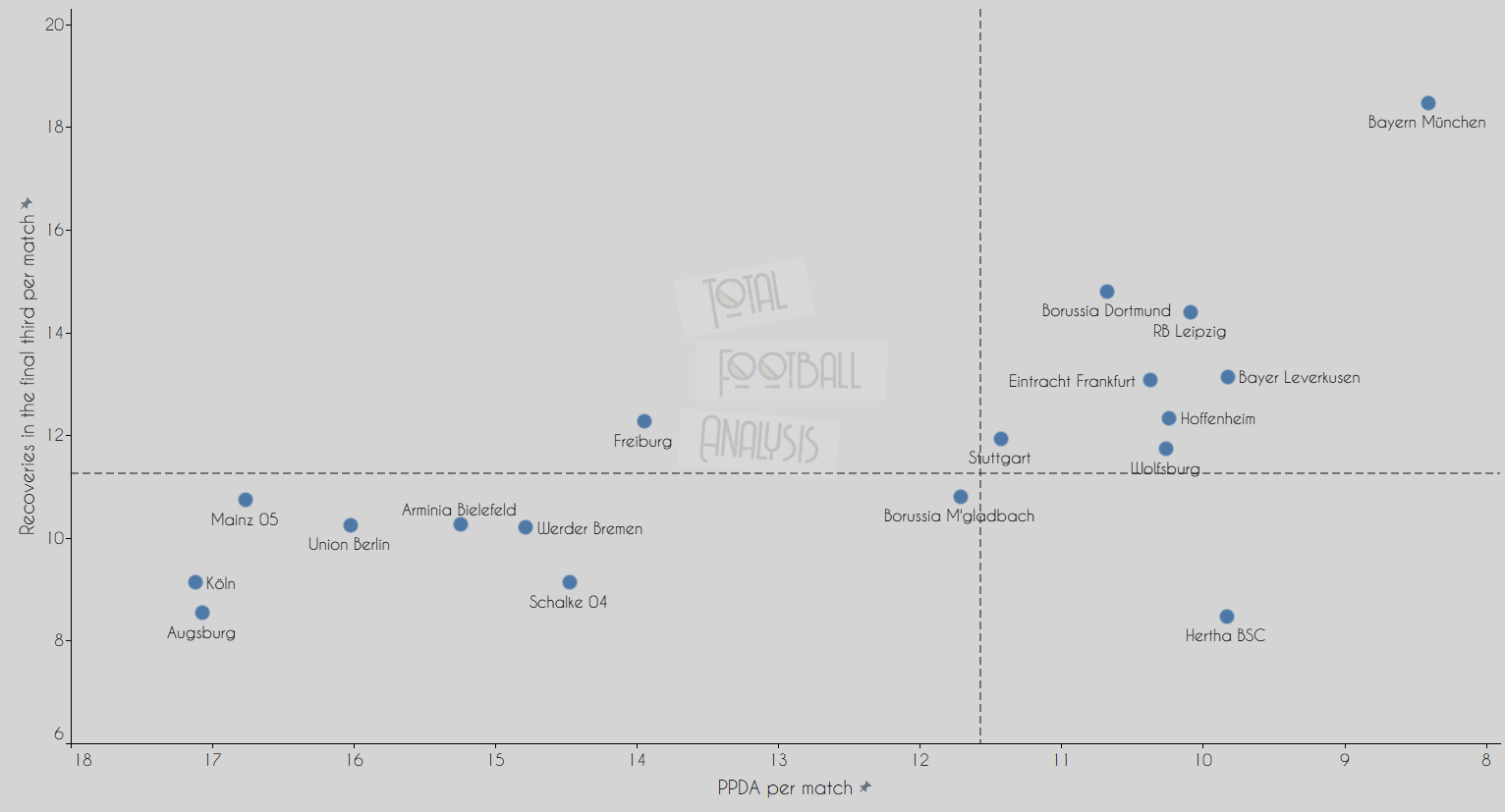 Through this analysis, we have evaluated various metrics that indicate how Bundesliga teams have performed compared to each other. Bayern surely have the best squad in the league, but they are four points ahead of Leipzig based on the individual quality of their players. According to the data RB Leipzig are better defensively and they are close to Bayern’s numbers in attack, but their finishing has let them down. Some of the other Bundesliga teams have shown strong performances as well and they could unsettle both teams at the top given the tight schedule they are facing in the second half of the season.