Mohammed Salisu arrived at Southampton from Real Valladolid in the summer of 2020 for a small fee of around £10 million. At the age of 22, Salisu is having an impressive season in the Premier League and is establishing himself as arguably the most impressive young centre-back in the league. Last season he featured rarely for the Saints with only 15 appearances in all competitions. This season, Hassenhuttl placed his faith in the young Ghanian defender and that faith is certainly being restored now. In recent weeks Southampton has recorded some impressive results with victory against Tottenham Hotspur and two draws against Manchester City and Manchester United. In these games, Salisu was instrumental in their defensive performance and has since gained a lot of praise and attention.

This scout report and tactical analysis will take a look into Salisu’s game and the reasons why is he having such an impressive season.

The importance of data in football is ever-growing and this is particularly the case for assessing and evaluating individual performances. In this analysis, we will look at some important metrics for assessing defenders and see how Salisu ranks amongst fellow centre-backs in the Premier League. The data shows Salisu against all Premier League centre-backs with a minimum of 500 minutes for their club this season. Both attacking and defensive contributions will be assessed in this data section. 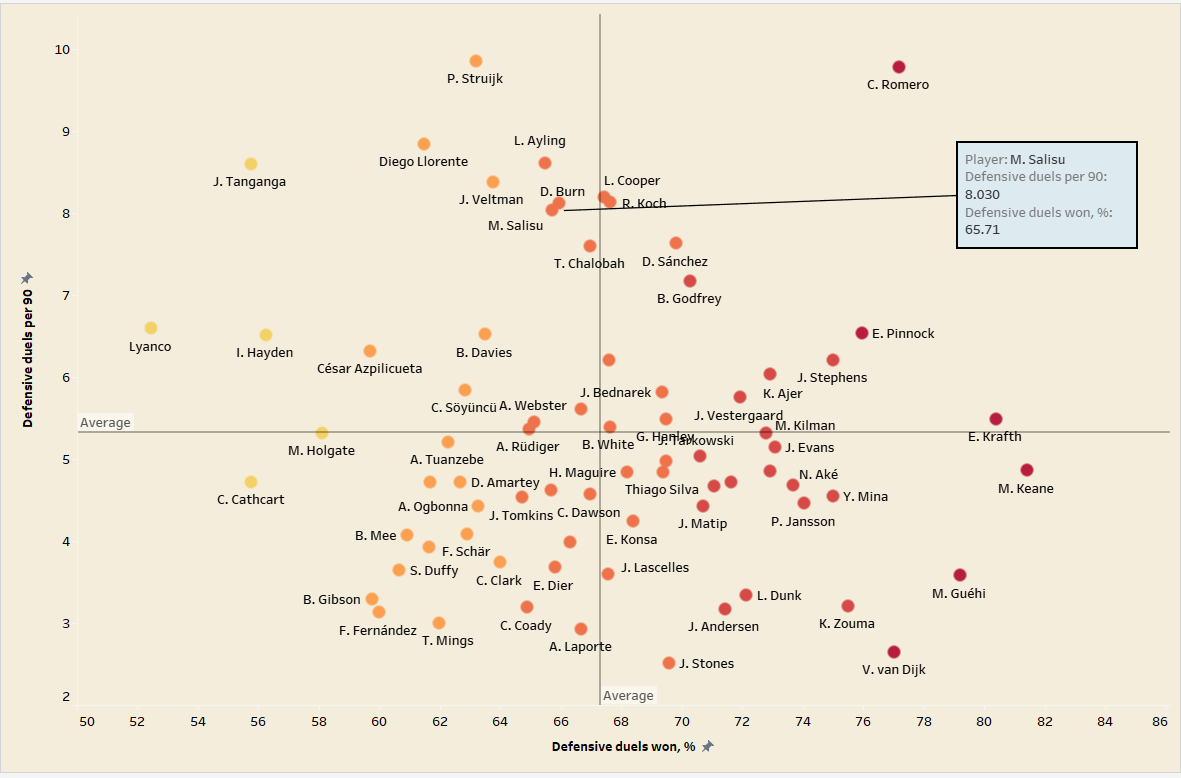 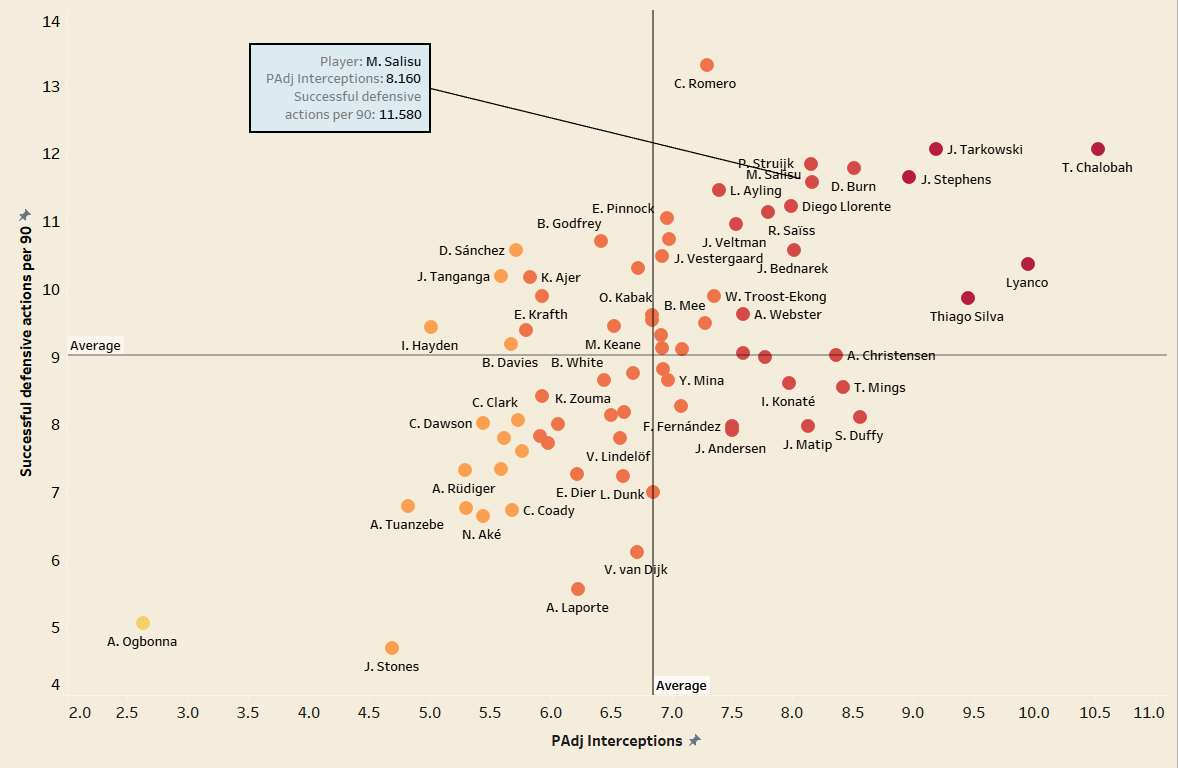 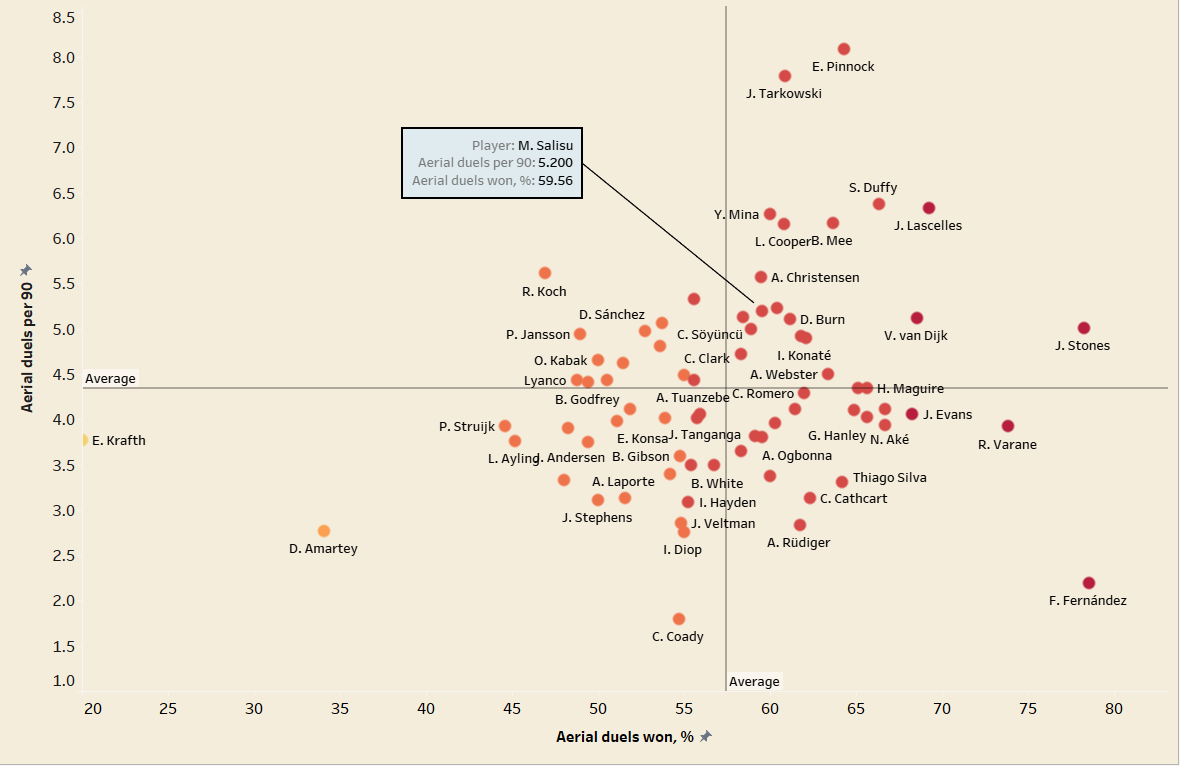 These graphs show Salisu is a complete defender and able to effectively contribute in different forms of defending whether it’s aerial battles or making interceptions. However, assessing defenders using data isn’t the most accurate way to do so. Lots of defensive qualities cannot be fully quantified using data, as they are often intangible and hard to record. Think about positioning or reading of the game. This will help explain why someone like Virgil Van Dijk’s metrics doesn’t jump off the page despite being one of the worlds best defenders. Although it’s not perfect it can still be helpful. 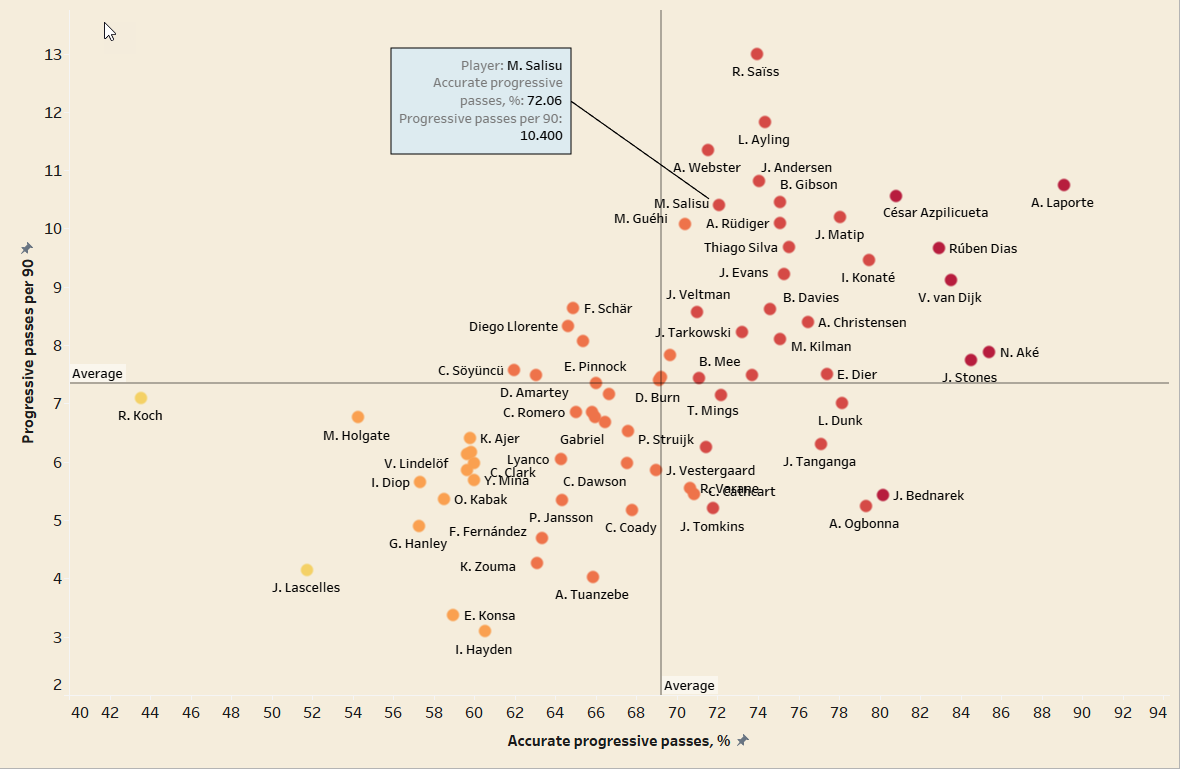 Salisu is one of the league’s best in progressive passes, with a high volume of passes with an above-average accuracy rate.

This is also the case for passes to the final third, where he again has high volume and a high accuracy rate. This makes Salisu valuable in possession as with his passing he can move the ball into more advanced and dangerous areas for his team. 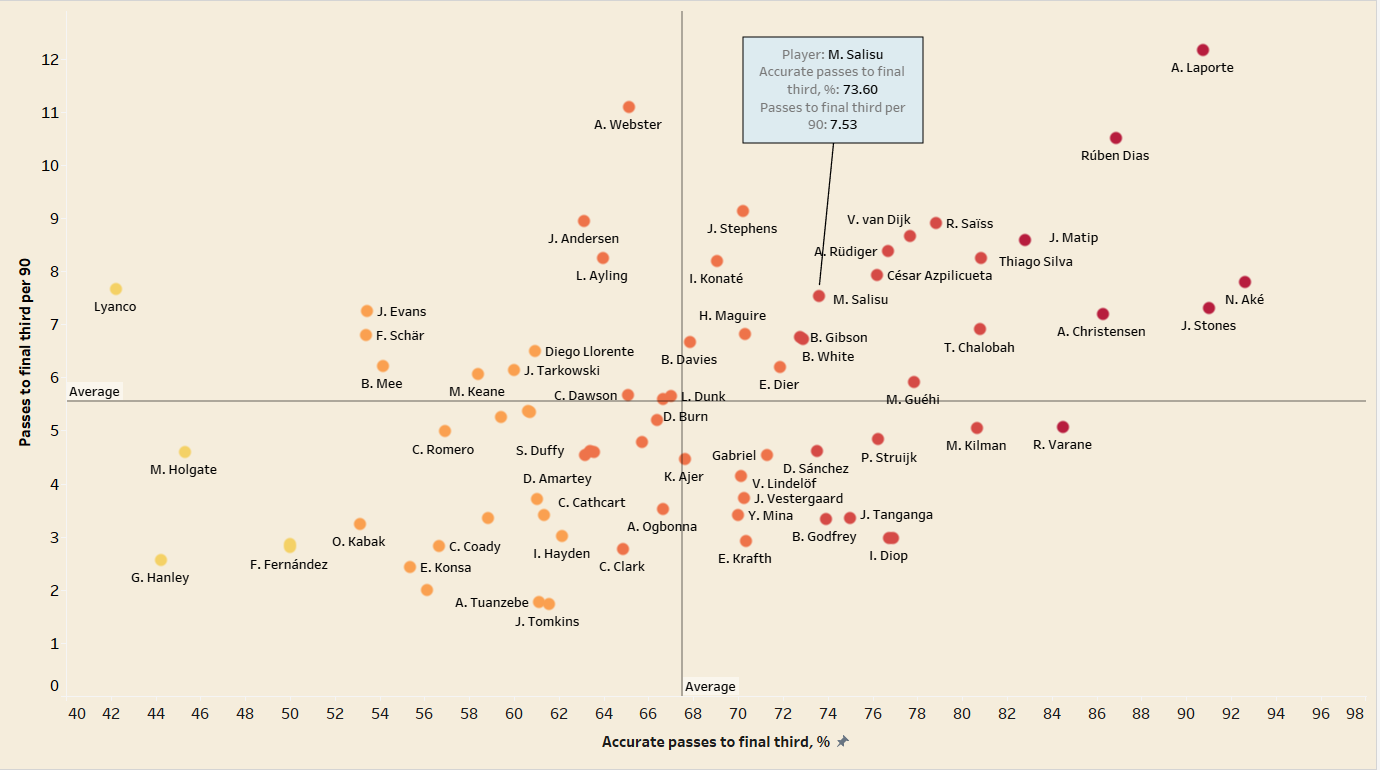 The data section of this scout report should indicate that Salisu is becoming one of the Premier League’s best both on and off the ball. We have now addressed data, but as already discussed it isn’t the best or only way to evaluate a player, so we will look at Salisu in a more traditional manner.

The data section of this analysis has told us that Salisu is good on the ball with the ability to progress the ball up the field using his passing range and ability. We will now take a look at a few examples of doing this for Southampton. Salisu is left-footed which provides a nice balance to the Southampton defence and when playing on the left side of a centre-back partnership makes it much easier when on the ball.

The first example came at Old Trafford in a recent fixture against Manchester United. Salisu has picked up the ball of his goalkeeper carried it forward, due to Manchester United sitting in a tactical deep block. He then decided to play the ball forward into Southampton forward Che Adams. 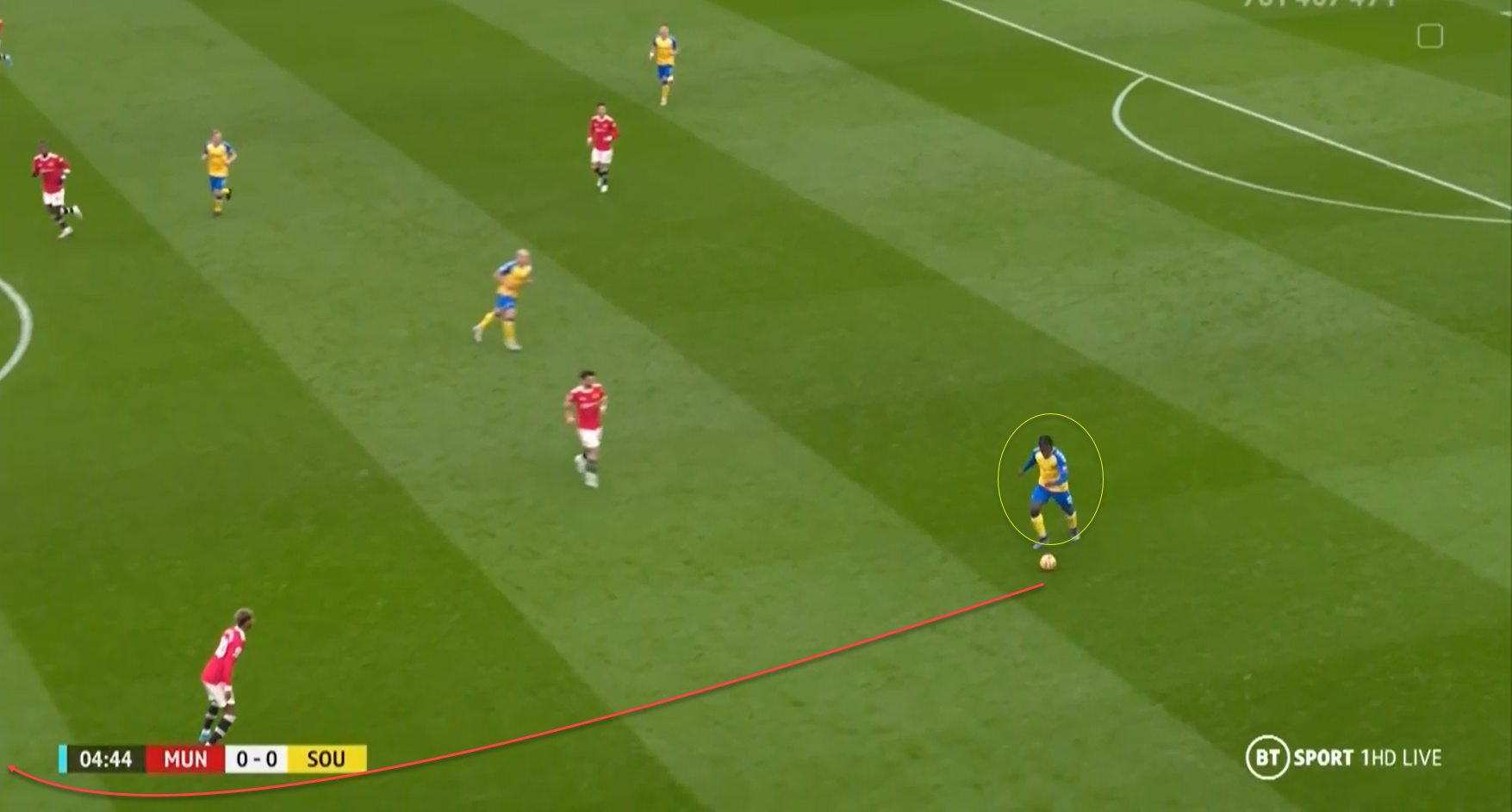 The pass does a great job of beating the midfield block and putting the ball into the opposition half. If Che Adams managed to hold the ball up it could be a goal-scoring opportunity for Southampton. 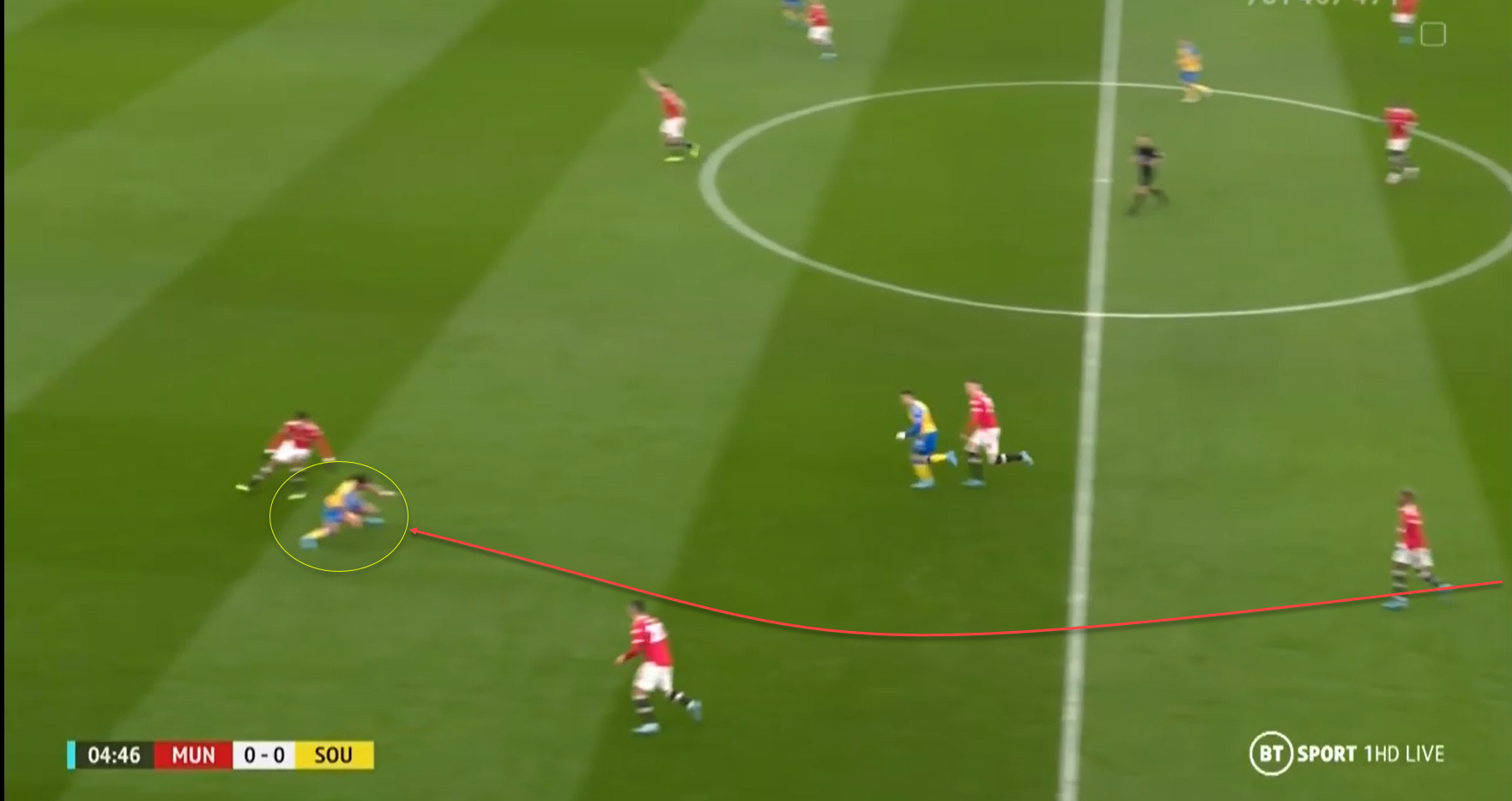 The next pass is in a similar situation in the same game, with Manchester United sitting so deep it provides a lot of opportunities for Salisu to progress the ball. in a similar manner, Salisu opens his body up and wants to play a pass beyond the midfield block into the opposition half.

This time the pass is more successful with Salisu managing to find space for his teammate – who has acres of space to run and carry the ball into, in the opposition final third.

These two examples are designed to show the types of passes Salisu makes and is able to make for his team. They are both progressive passes and into the opposition half, showing that Salisu is a valuable player when it comes to build-up play.

Salisu is a defender who thrives off defending his box and 6-yard area, making last-ditch tackles or blocks. This suits Southampton as they often face teams who dominate possession. The Majority of Salisu’s best defensive actions are in those instances when he’s defending his own 6-yard box. In addition, his strongest attributes are his physical ones, with him being very quick and strong which can make him very hard to beat 1 v 1. This example is from their game against Brentford and shows Salisu’s strong 1 v 1 defending. Brentford has just won the ball and has released  Mbuemo down the left side. Mbuemo has space and an advantage on Salisu but his speed allows him to get back and close the space off.

Salisu waits for him to stop the ball before lunging in to make a well-timed challenge and dislodge the ball out of Mbuemo’s control.

The ball is still in play and Brentford right wing-back Rasmussen is going to gather the ball. But Salisu rises to his feet quickly and makes another excellent challenge.

Showing great athleticism to make two well-timed challenges. His 1 v 1 defending is one of his best attributed alongside his ability to defend his box.

Salisu is also an active defender who likes to engage and make duels or defensive actions, this is supported by the data. This can sometimes lead to him being slightly rash and leading to errors but sometimes it also leads to him making great double challenges like shown above. However, when assessing a player, you consider both the advantages and disadvantages. As shown here. Leicester has the ball on the left-hand side, Lookman is going to play a pass inside too James Maddison. Salisu doesn’t get too tight as this would leave space in behind but as the pass goes into Maddison he tries lunging in to make a tackle.

Salisu manages to get a small touch on the ball but is now out of the game on the floor, Leicester gathers the ball and exploits the massive whole in the Southampton defence left by Salisu.

If this comes off it looks like an excellent challenge but when it doesn’t it leads to a goal-scoring opportunity for the opposition.

If Salisu is going to make the next level, he needs to have better decision making as to when going for those sorts of challenges but also to stay on his feet more and be more composed. We must also remember he is 22 and still learning and developing.

This season has seen Salisu step up and become one of the most promising centre-backs in the Premier League. This is shown by both his data analysis and tactical analysis. At the age of 22, he will only develop, grow and mature into a more complete defender but he does have all the skills needed, he just needs a little bit of refinement. This is in regard to both his in possession and out of possession attributes. With Southampton’s track record of recruitment and player development don’t be surprised if you see Salisu go all the way to the top