Crystal Palace 2020/21: Is it sustainable to defend and attack in such separate blocks? – scout report

Crystal Palace has started the Premier League season in blistering fashion. The Eagles picked up three points against Manchester United on the first match of the season, and their form has not slowed down. After a string of good results, despite losing to both Chelsea and Everton, Palace currently sits in eighth place on the table. This early run of positive form has showcased quality football where Roy Hogdson’s tactics are at the forefront of discussion. Despite not having the best squad, the Palace manager has found a way to make his side very difficult to play against.

In the past, we saw glimpses of Palace and their ability, but the results were not always there. Crystal Palace finished 14th in the Premier League last season which saw them battle at the latter end of the season to stay in the top flight. That campaign saw them win only ten matches. This season, there is a reason for optimism after registering three victories out of their first six matches. Hogdson has figured out how to set up his side and the tactics are providing dividends.

Hodgson plays a 4-4-2 formation which sees a very separated attack and defensive block. When the opposition is attacking, Palace sits in a low block, making it very difficult for the team to break them down. However, in the attacking phases of the match, Palace is extremely dynamic with four attacking players, leaving the defenders out of the build-up.

This tactical analysis and scout report will look into whether it is sustainable for Crystal Palace to defend and attack in such separate blocks.

In order to understand how Crystal Palace play, it is important to see how Hogdson’s tactics influence the play in his 4-4-2 formation. This formation is less popular in modern-day football due to the less dynamic nature of the attacking football, but Palace makes this work for their players.

Hogdson knows that players such as Andros Townsend, Wilfried Zaha, Jeffrey Schlupp, and Eberechi Eze all have a tremendous pace going forward. This is taken into account as Hogdson sets up his teams due to the importance of them to play on the counter-attack. In the defensive stage of the game, Palace is deep in a low block.

This tactical system occurs when the defending team is pushed right back against their own goal. Each player is in their own half and the opposing team has the ball well inside the half they are attacking. This creates an onslaught of attacking sequences and a difficult time managing the match for the defending side. However, if you are able to have a disciplined defensive unit, the low block can be equally as challenging for the opposing team.

The formation below shows how Palace will set up defensively, with a fairly standard 4-4-2 shape being in place. Due to the two lines of four midfielders and defenders, any team that tries to play into space between those two lines will have a difficult time. This usually forces opposing teams to play crosses in early or try and shift the point of attacking in order to break down Palace. While they are not perfect in defending, their determination to sit deep actually allows for their attacking players to become more of a threat. 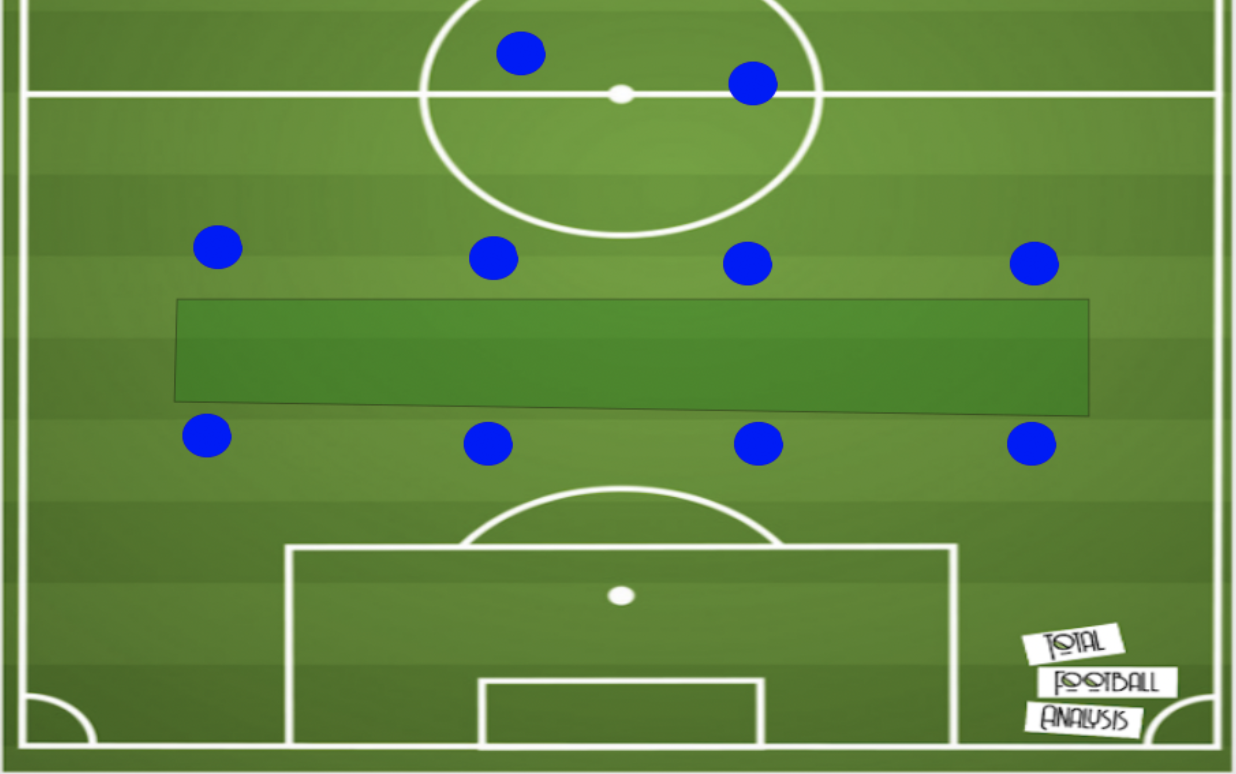 This analysis in the recent match against Fulham shows how the Eagles like to defend. It is early on in the match but they are comfortable in the low block. Fulham has a tremendously difficult task to move the ball forward, and the circled attackers are basically ineffective due to Palace’s positioning to close down the ball.

When attacking, Crystal Palace finds themselves executing a counterattack in many cases. Again, the reason for this being the pace of the Eagles attack-minded players. The formation switches from a 4-4-2 to a 4-2-4 with the outside midfielders joining in the attack. Sometimes Zaha will even drop into the number 10 role making a 4-2-3-1 formation in attack. The key here is the two pivot players whose primary job is to protect the backline. They will not venture forward and will let the attacking players do a majority of the creative responsibility. This works for Palace as they will always have six players back to defend if a transition is to occur.

The analysis below shows an example of the pivot player distributing the ball to the attack as Crystal Palace look to break on the counter. This example shows how Zaha likes to show up in areas of the pitch in order to command the ball and drive forward. Simultaneously, Townsend is calling for the ball to take it up the wing, while Schlupp is on the opposite wing making a run forward. While this is happening, the two midfielders will stay stagnant and help cover the back four. 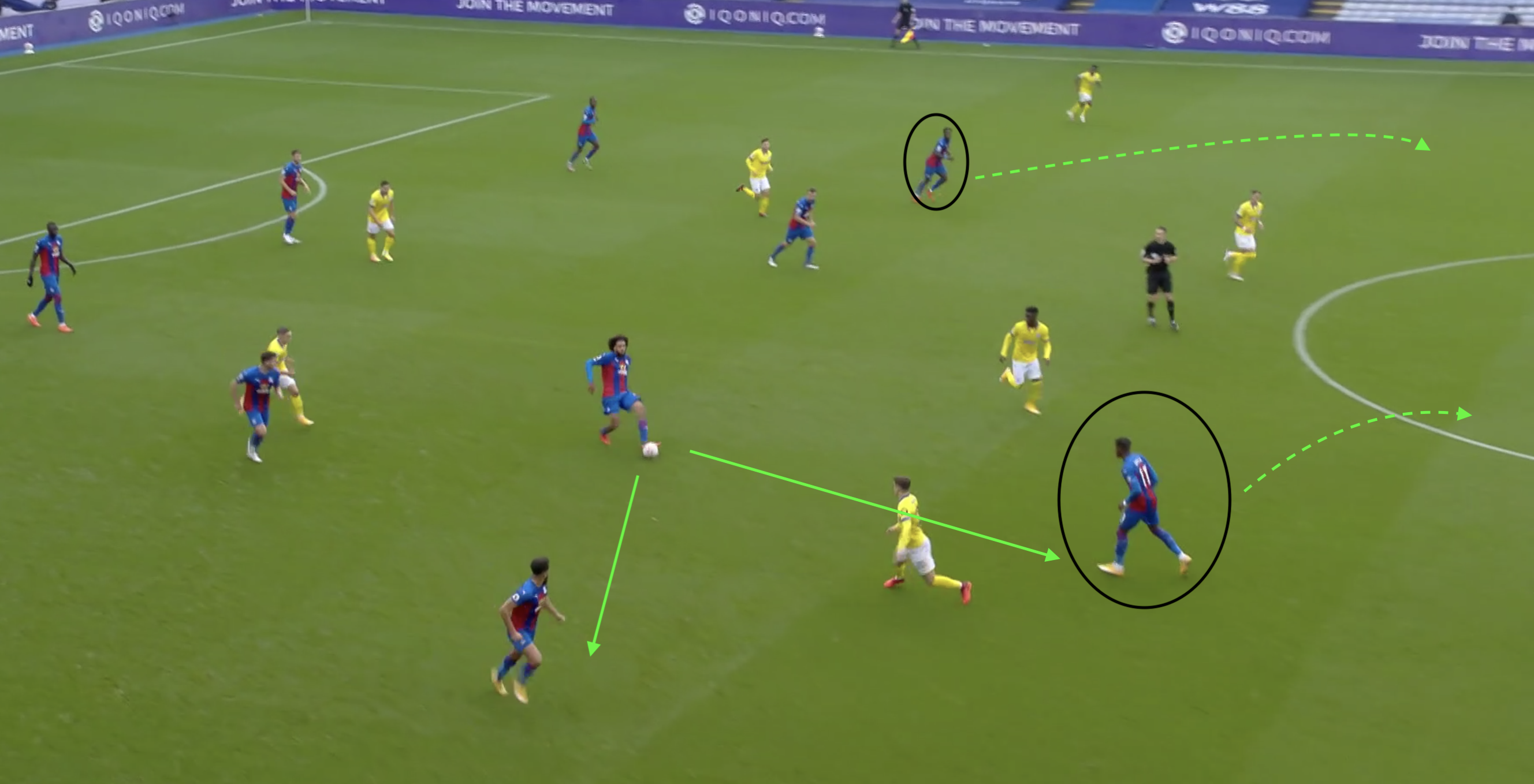 Now that it is understood how Palace’s shape looks while attacking and defending, we can begin to answer the question of is it sustainable or not. For teams of lower caliber and ability to bring in top talents, teams such as Crystal Palace and Aston Villa do rely more heavily on particular players. In Palace’s case, Zaha is a crucial piece to this puzzle, and his form will determine whether the Eagles impressive form can continue. His individual impact could be compared to the likes of Jack Grealish of Aston Villa. Both players are incredibly shifty and powerful dribblers of the ball who can attack from anywhere on the pitch.

Zaha has been the focal point of the counter-attack for Hogdson due to this ball-carrying ability. He is constantly finding areas of danger and taking on players to get into the box. His newfound importance and role for the team have seen his position change from the wings to the middle of the park, where he is proving to be far more effective. Thus far in the Premier League season, Zaha has scored five goals, which is one better than the entirety of last season. Again, this form is a testament to the change in position Hogdson implemented.

By getting Zaha on the ball, he is far more dangerous in both goal scoring and goal creating. In the example below, Zaha gets on the ball and is able to provide a fantastic reverse ball assist for Palace to score their first goal of the match against Fulham. These kinds of passes are what is the difference for Palace who does not score many goals. They rely on getting ahead then letting their defensive block control the match. This level of skill from Zaha is again why the Eagles are so dependent on him.

In order for Palace to continue to find success by having such separated blocks depends on Zaha’s fitness and form. He is a crucial player in creating and driving the ball forward up the pitch. His ability takes pressure off of other players and allows for free-flowing football.

Importance of outside midfielders

While Zaha is clearly an important piece of the puzzle, the importance of the wingers in Hogdson’s 4-4-2 is crucial to the team’s tactics. As discussed, the formation when in transition can change to a 4-2-4, where the outside midfielders will advance far up the pitch. In order to do this, players such as Schlupp and Townsend have to put in heavy yards up and down the pitch. Without this energy, Palace could be exposed when in a defensive transition or the forwards would be left with no support in an attacking transition.

The analysis below shows an example of the heavy yards the outside midfielders must put in so Palace can keep their shape. In this instance, Solly March has the ball and is looking towards his left side. With Palace potentially outnumbered, Townsend fulfills his tactical duties by tracking back. As you can see, the Eagles still keep the back four shape that serves them so well.

The ability to play with such separate blocks would not be possible without the hard work of players like Townsend. Although he is known for his attacking capabilities and shooting, he is still able to put in the shift necessary for success.

Crystal Palace has a formula that is working as of late, but with fixtures such as Leeds United and Wolves on the horizon, it will be a testing few weeks. The separate blocks have been sustainable thus far. The reasons these tactics work is primarily due to the effectiveness of Zaha, the importance of the outside midfielders understanding their tactical instructions, and the role of the pivot players providing a shield for the defense. This formula has worked and with three victories in three, it would be foolish to suggest Hogdson will make any changes to his tactics.

However, especially if Zaha gets injured or loses form, Palace may find it difficult to be so effective while playing with such separate blocks. Although it is not the most attractive football, these tactics have been the difference for Palace who have enjoyed a great start to the season. It will be interesting to see how the side progresses.