Marseille came into this game off the back of a bad run, having taken just one point from their previous two games. However, they managed to beat PSG in a tense game full of problems in matchday three, which shows that they have a team capable of competing against top teams. Having now achieved eight points in five games, they need to step their game up if they want to compete well in the UEFA Champions League.

On the other hand, Metz had won their previous game but had lost their first three games. It has to be said though, that the games they had were mainly against contenders to end up in the first places of Ligue 1. These games were decided by fine margins though, which proves that they were able to compete against these superior teams.

The match between these teams ended 1-1, with Metz going ahead first. Marseille managed to draw in the last minute and deservedly so, as they were the better team throughout the game.

In this tactical analysis, we will observe the tactics used by both teams and how these changed over the game. In this analysis, we will see how Marseille, which is the superior team, planned their game against Metz, who aimed to be the surprise of the day. 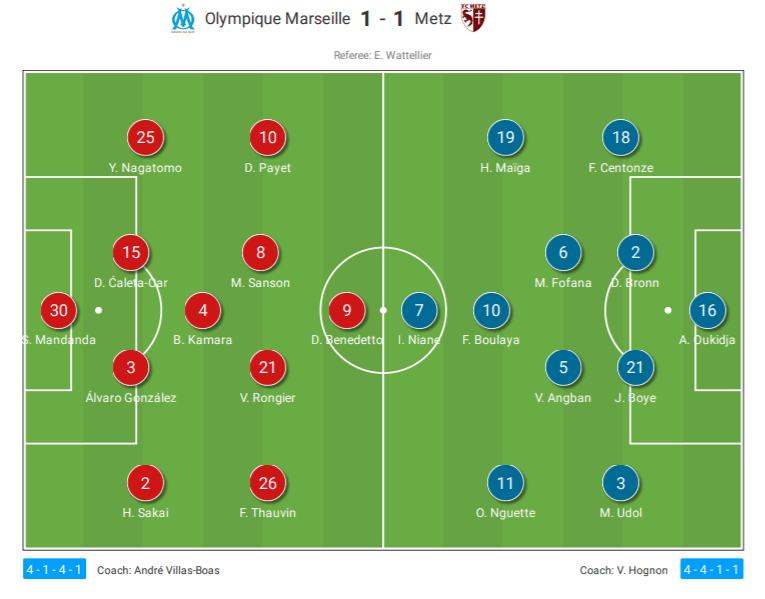 Marseille started with a strong team in a 4-1-4-1 with the two Japanese players Hiroki Sakai and Yuto Nagatomo as full-backs. Above them were Florian Thauvin and Dimitri Payet, both players of a high level. In the middle were Boubacar Kamara, as a defensive midfielder, with Morgan Sanson and Valentin Rongier in front of him. The attack was led by Darío Benedetto.

Metz played a 4-4-1-1 with Farid Boulaya linking up the midfield and the striker. Up front was Ibrahima Niane and to his sides were Opa Nguette and Habib Maïga. Then, the defence was made up by Matthieu Udol and Fabien Centonze as full-backs with the help of John Boye and Dylan Bronn as centre-backs.

Throughout the whole game, Marseille pressed higher and more intensely than Metz. Marseille pressed high to recover the ball as soon as possible and start another attack. This is a tactic that is frequently used by the team that is more superior to their opponent as it minimises the other team’s options to attack and maximises your time on the ball.

Their high press can be seen in the image below. We can see how Payet comes to help the striker to mark the two centre-backs and that the two Marseille centre-midfielders have come up to mark the opponent midfielders.

Moreover, since Payet has gone up and he is the left-winger, this has left the opponent right-back open. Therefore, the Marseille left-back is running to cover this player. This can be dangerous as the left-back will be leaving space open behind him. This can be taken advantage of by movement into that space by Metz players. 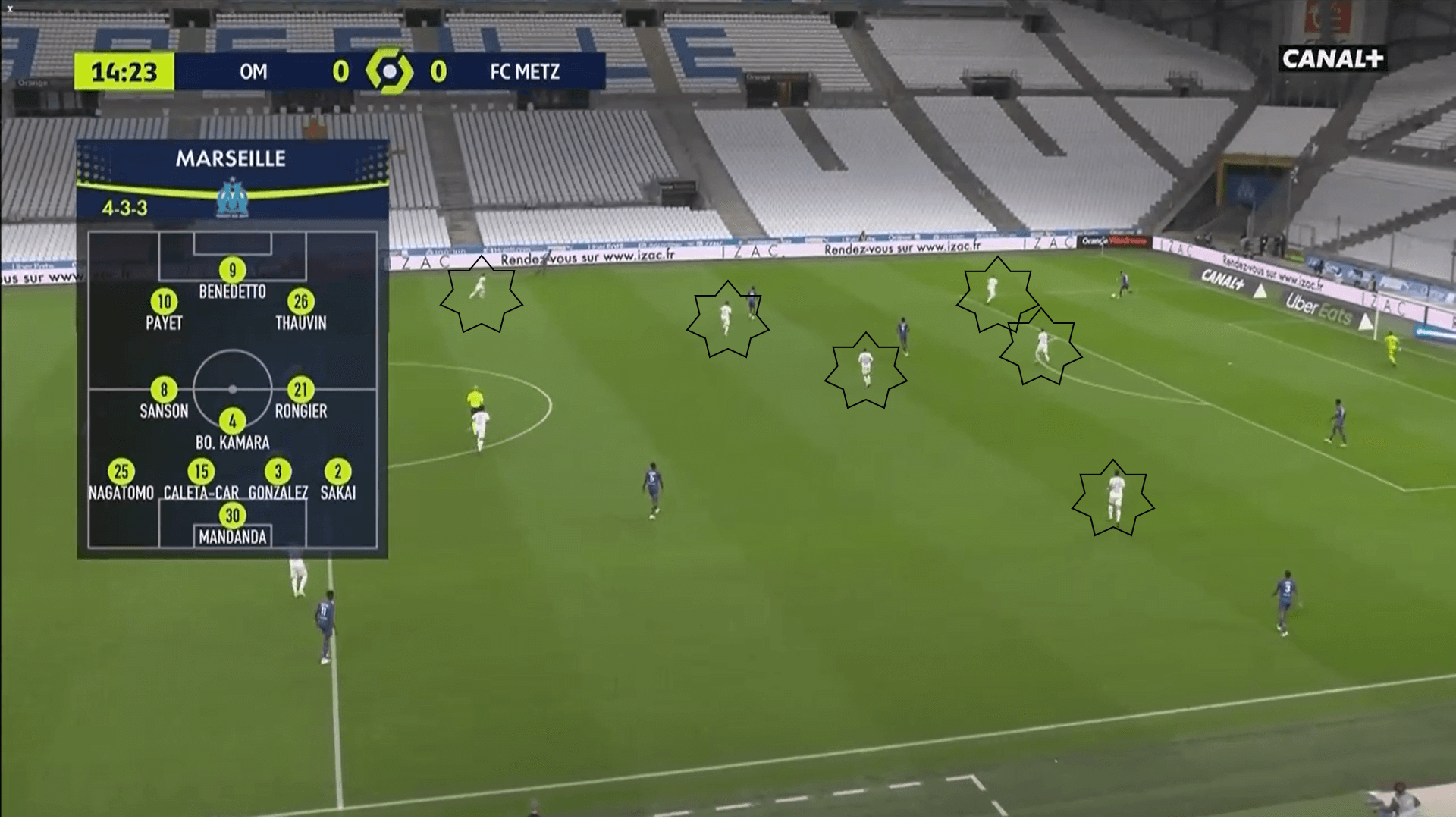 Additionally, Marseille performed an intense counter-press to be able to regain the ball as quickly as possible in a high position. This strategy is commonly used by Barcelona by rapidly pressing the man in possession and also blocking all possible close options.

This is seen in the example below, where there are five Marseille players forming a circle around the player in possession to force him to make an error. Through this counter-pressing, Marseille made sure that Metz had problems in creating plays.

This was especially effective in the first half, which was dominated by Marseille as they had most of the possession (66%) and a PPDA of 9.8, compared to Metz’s 26.5. PPDA is passes per defensive action so the lower the number, the more intense and effective your team’s pressure is. 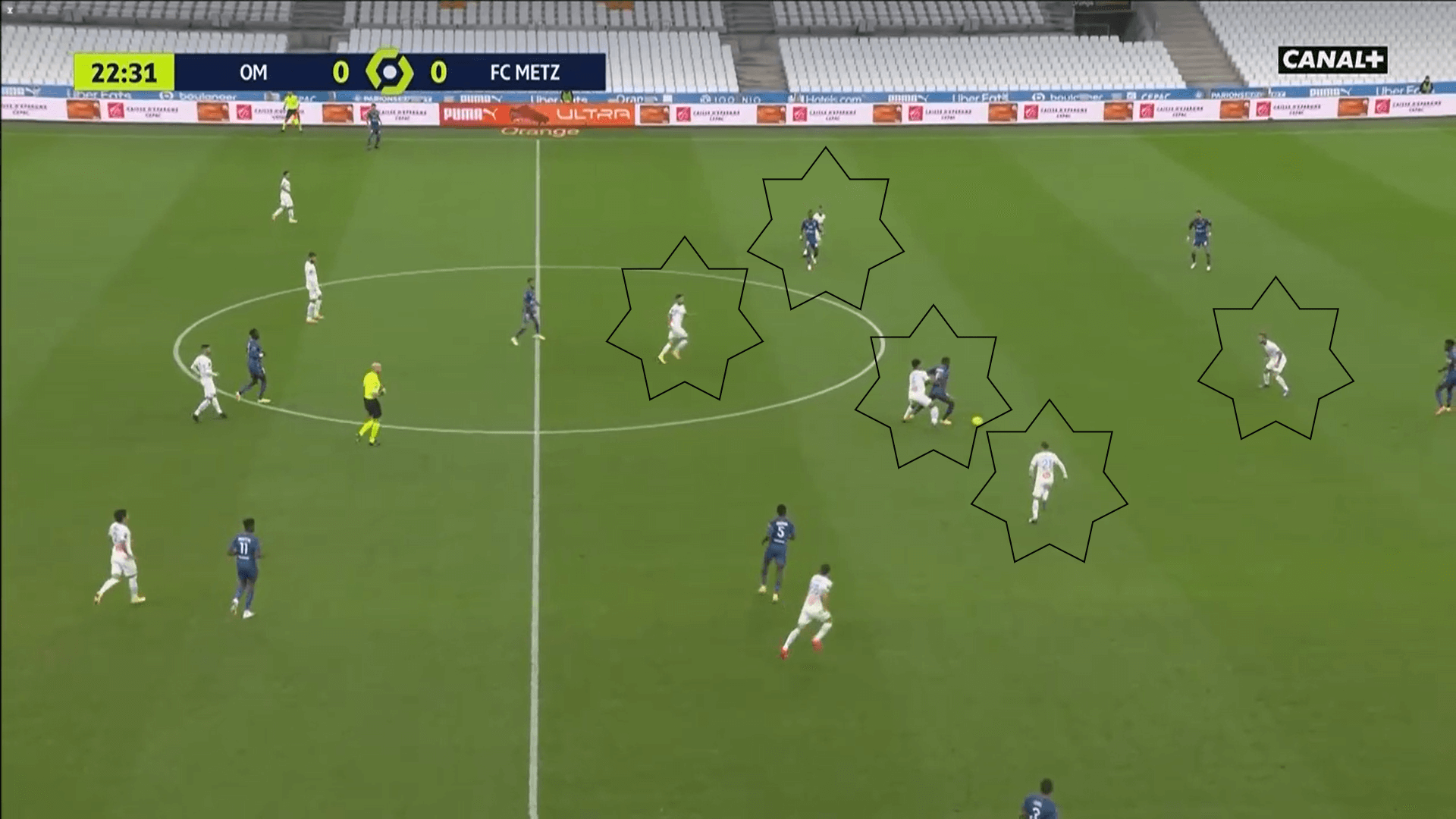 Moving on to Metz, they were not very intense in the first half and pressed in a medium-high block. However, there was little pressure on the centre-backs when they got close to their line of pressure and this enabled them to freely move the ball until they found a good option.

As mentioned before, they had a PPDA of 26.5 in the first half. This is a very high number and shows that they allowed Marseille to play with plenty of time on the ball. However, they lowered this number in the second half, which we will discuss now. 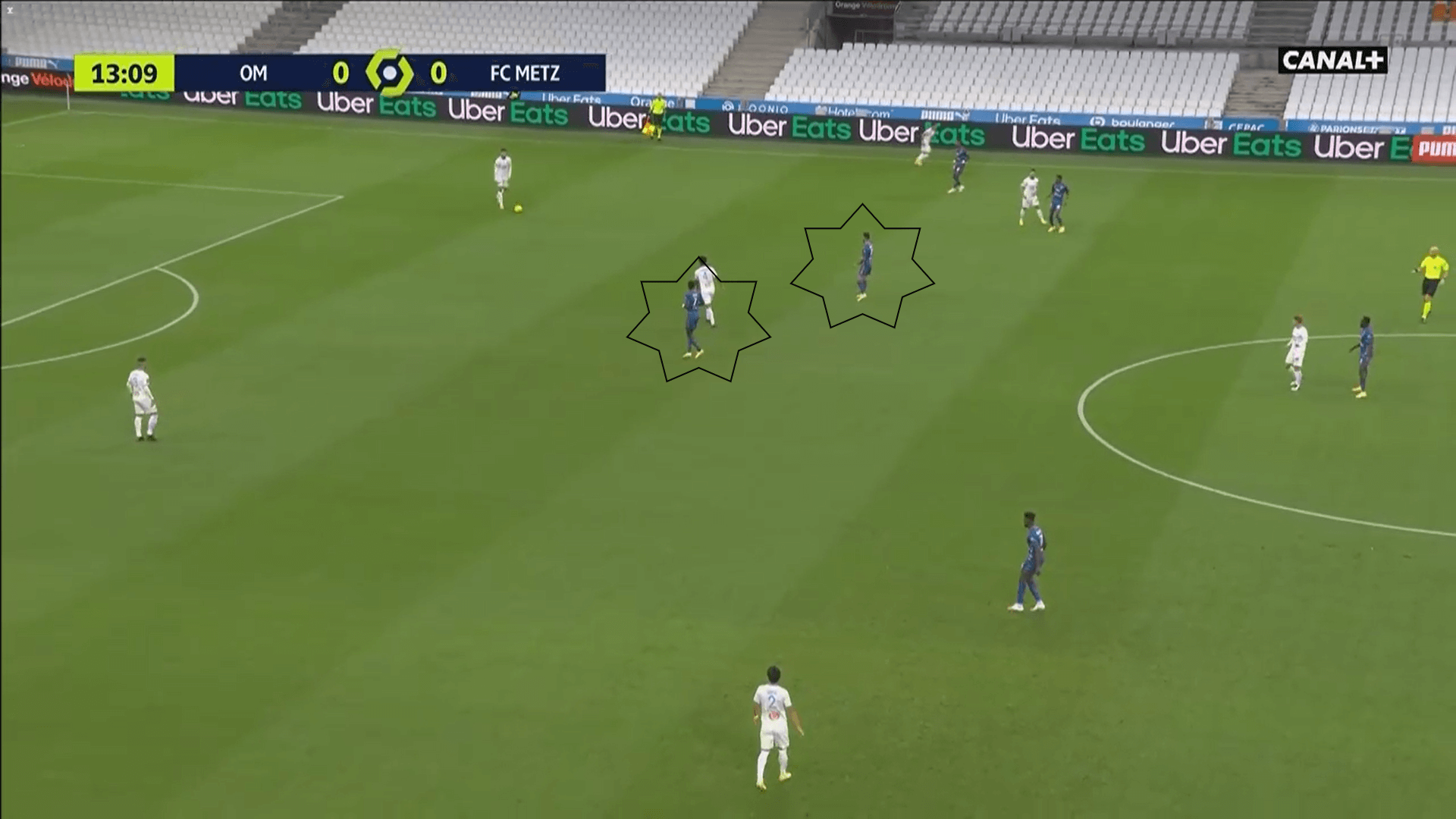 In the second half, Metz’s coach Vincent Hognon ordered them to press higher up and with more intensity. He must have seen that Marseille were too comfortable on the ball and this allowed them space and time to create plays.

This change in their pressure reduced their PPDA in the second half to 17.2 which is a substantial difference from before. Additionally, this better pressure allowed them to have more of the ball because they were recovering it quicker. Now their possession percentage increased to 46% and this allowed them to link up better.

Their high pressure is shown in the image below. The striker and the attacking-midfielder had to keep switching between pressuring a centre-back or the defensive midfielder that came down to help. The wingers then came up or went back depending on if the ball was on their side or not.

He has to position himself between these to be able to have time to pressure them when they get the ball. But if one of them manages to control the ball well, it is a 2 vs 1 situation. 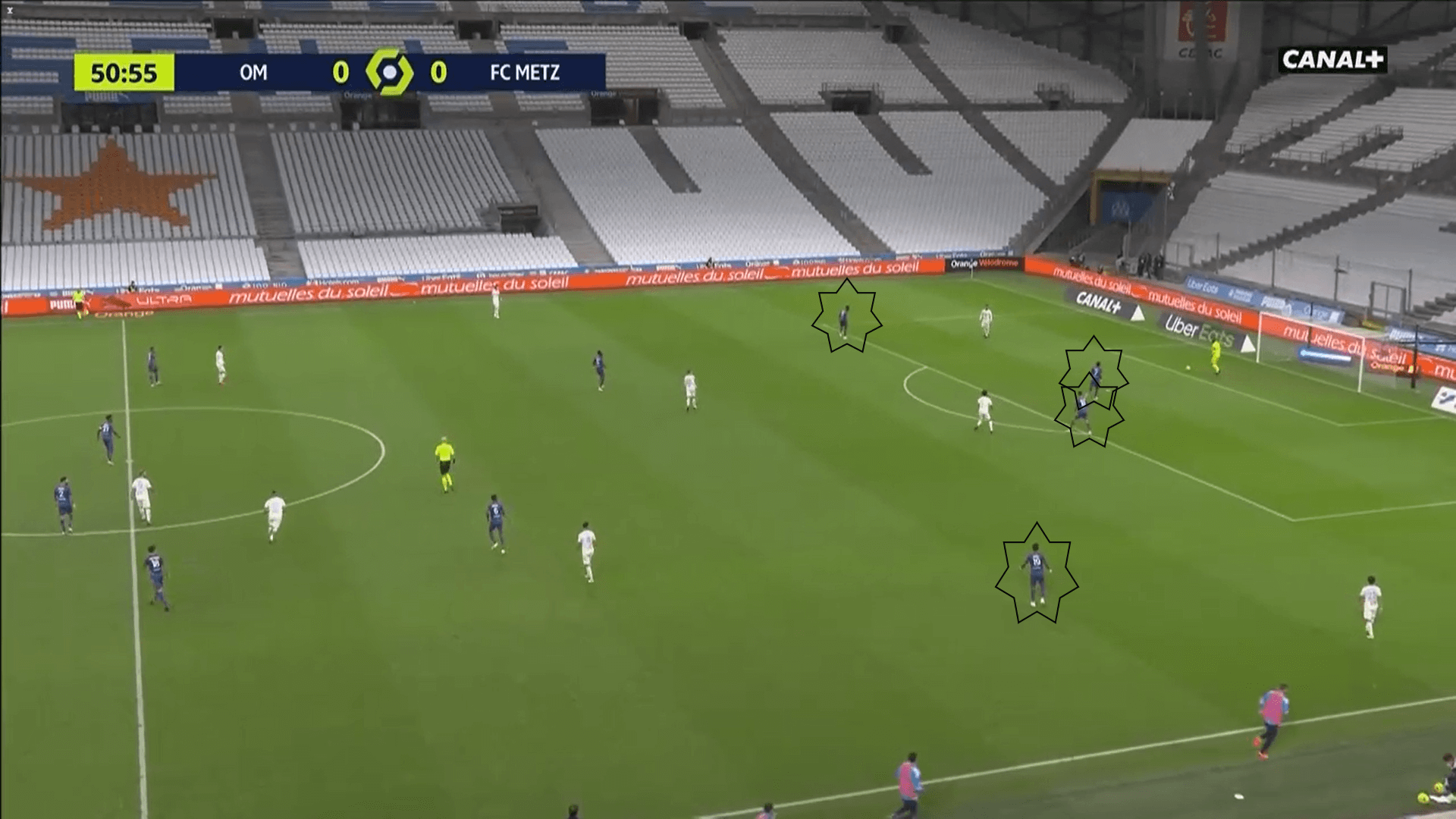 Movement in the wings

Marseille had different options to create space in the wing. They preferred to attack through the wing instead of through the middle because it is easier and also because they have the two most talented players on the wings, Thauvin and Payet.

If they wanted to attack through the wing, they needed to have mechanisms to create space. The first one was with the defensive-midfielder dropping down to help the centre-backs in the build-up. This made the two centre-back go wider to distance themselves from him.

Therefore, the right-back had to move up because the right centre-back would occupy his place. This allowed for him to move forwards and also to be an easy passing option for the centre-back. This movement is seen in the example below.

Additionally, it also made the opponent left-winger drop back to stay in line with the Marseille right-back and thus gave more space to the right centre-back. 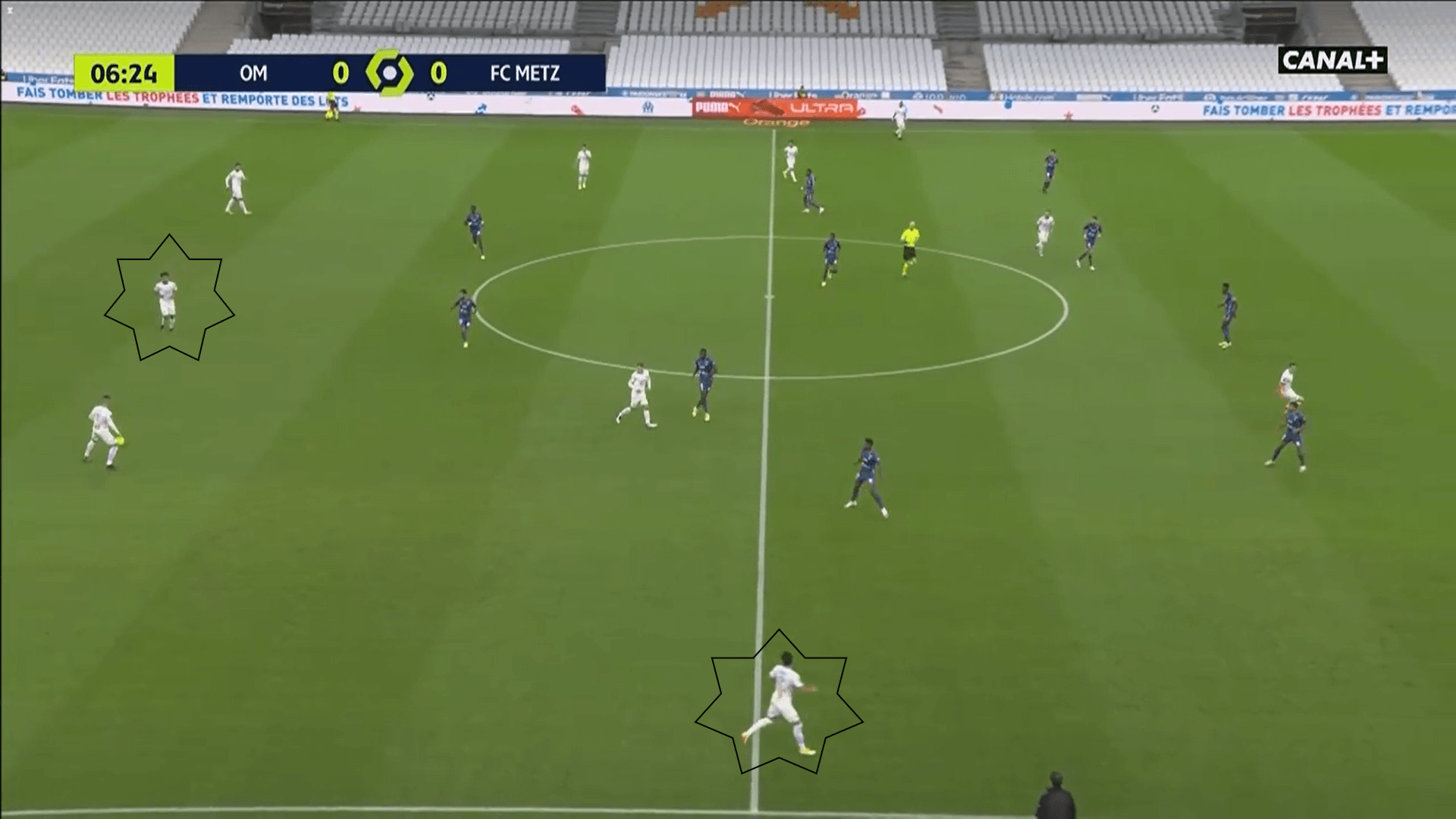 Another way they created space in the wing was with the winger making a run inside and taking the opponent full-back with him. This then left a lot of space for the Marseille right-back to run into and if the opponent left-winger were not aware of this happening, the right-back could go into the space alone.

Marseille would do the same on the left side but instead of Payet making a run in behind, he would go inside and ask for the ball through the middle. Either way, the space for the full-back is created. 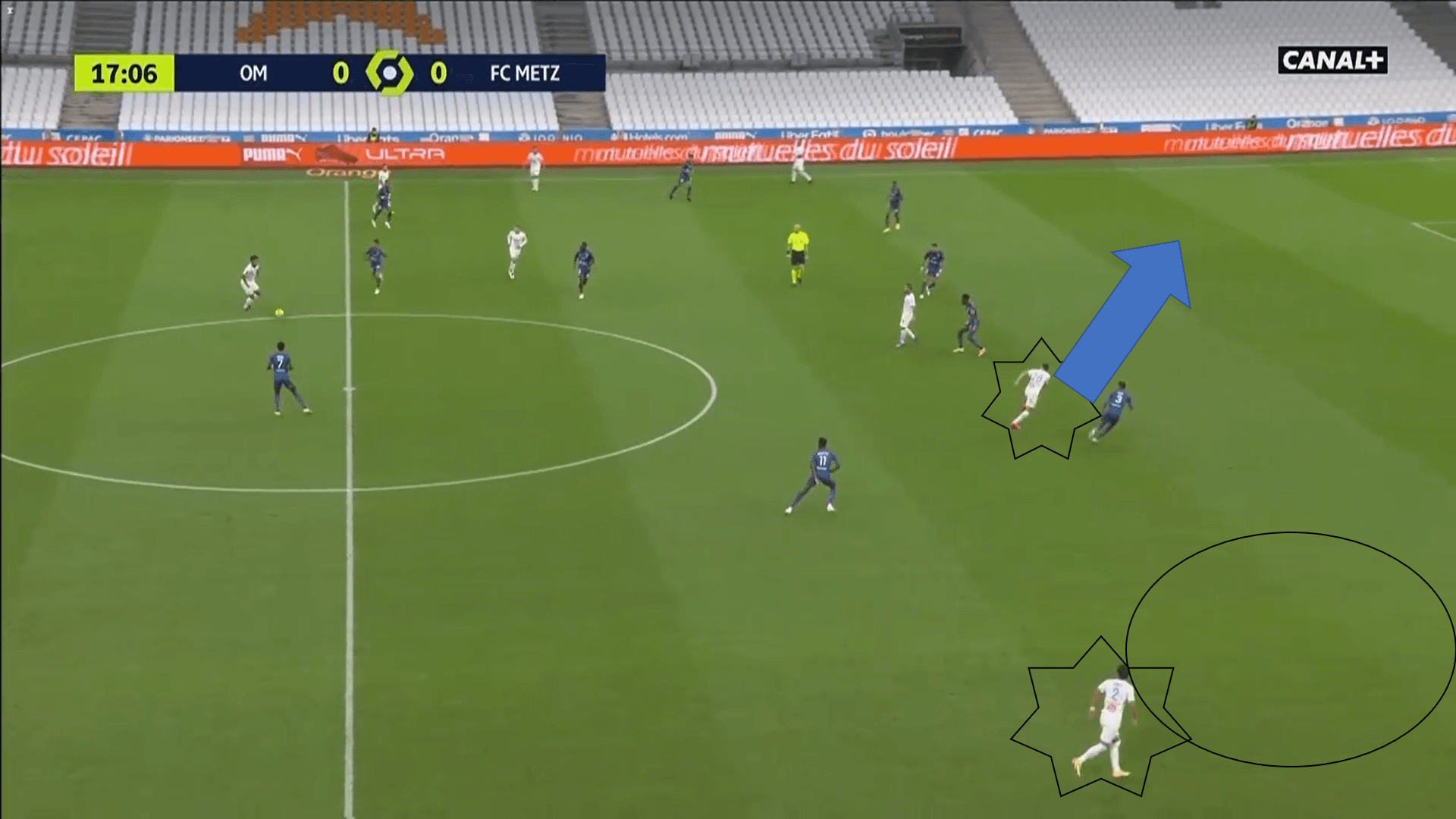 Other times they would do the opposite. They would communicate with each other to see who should go inside. There were occasions where the right-back went inside and brought the opponent left-winger with him.

Therefore, this created space for the right-winger drop back a bit and control the ball with time and space to decide. This was especially effective because the player getting the ball would be Thauvin who has the quality to create danger and make a good pass behind the defence. 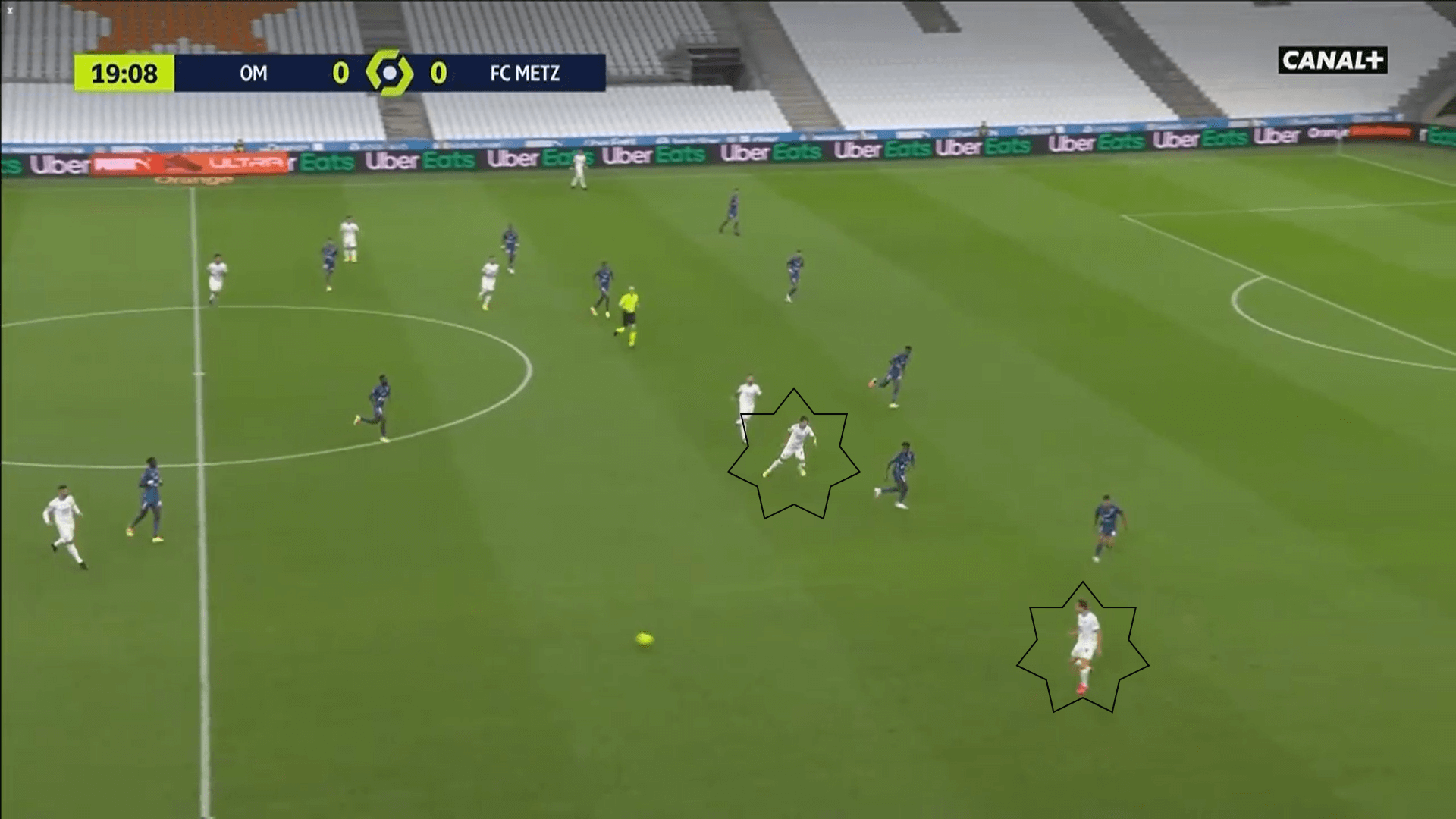 The times Metz would attack, they would also have attacking full-backs, especially on the left side. In fact, their goal came from a cross into the box by their left-back. They would use a similar method as their left-winger would go inside and ask for the ball through the middle.

This left the space in the wing for the left-back to run into and create danger. This is seen in the image below. 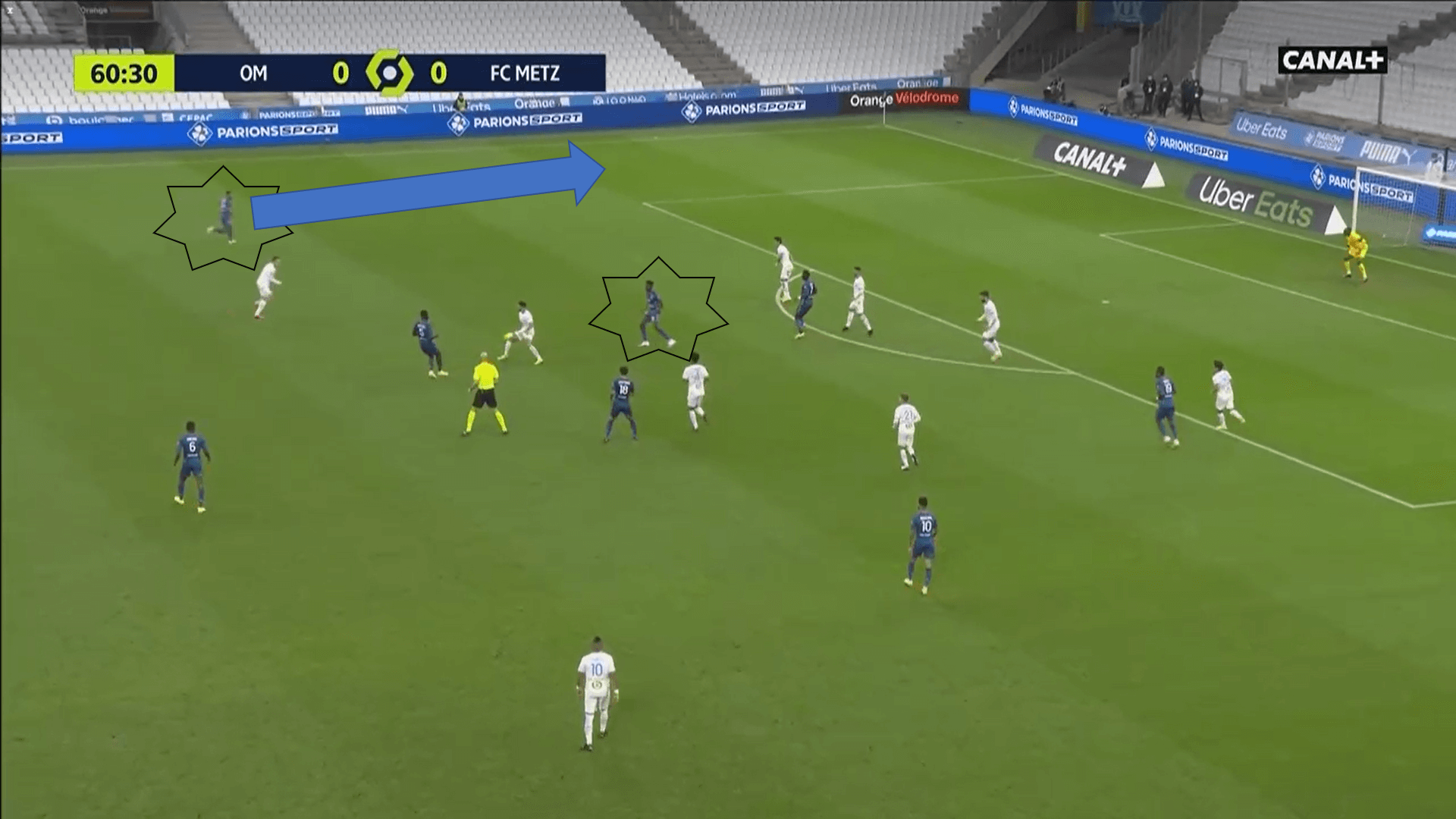 Metz relied on quick attacks to create danger. They have speed up front and they wanted to take advantage of it. This was especially true in the first half since they were not getting much of the ball so when they did have it, they preferred direct attacks.

These were made in order to catch the Marseille defence by surprise when they recovered the ball. The example below shows how they recover the ball in the midfield in the first image and after three quick passes, the ball is passed to the striker who makes a great run in behind. 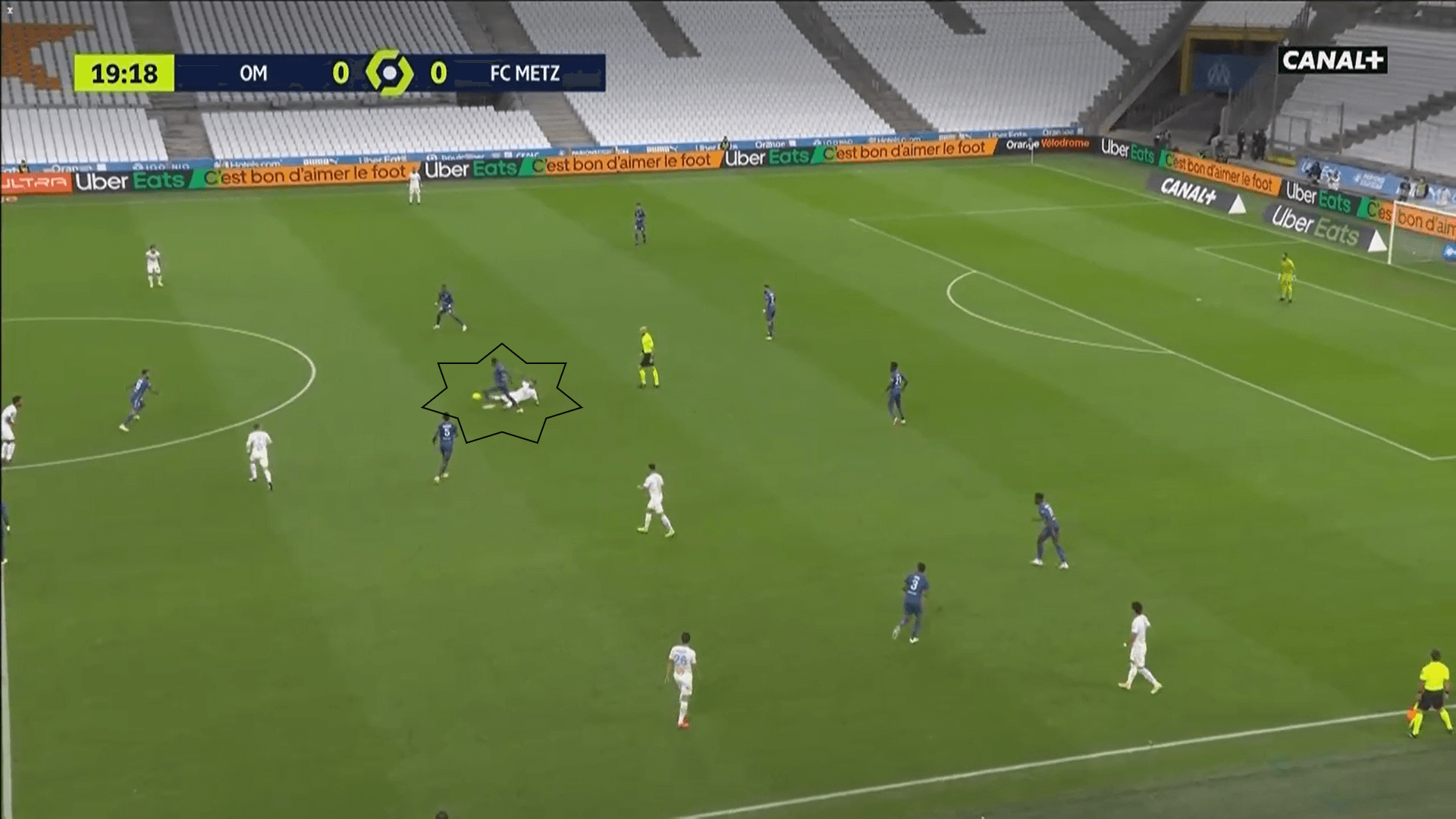 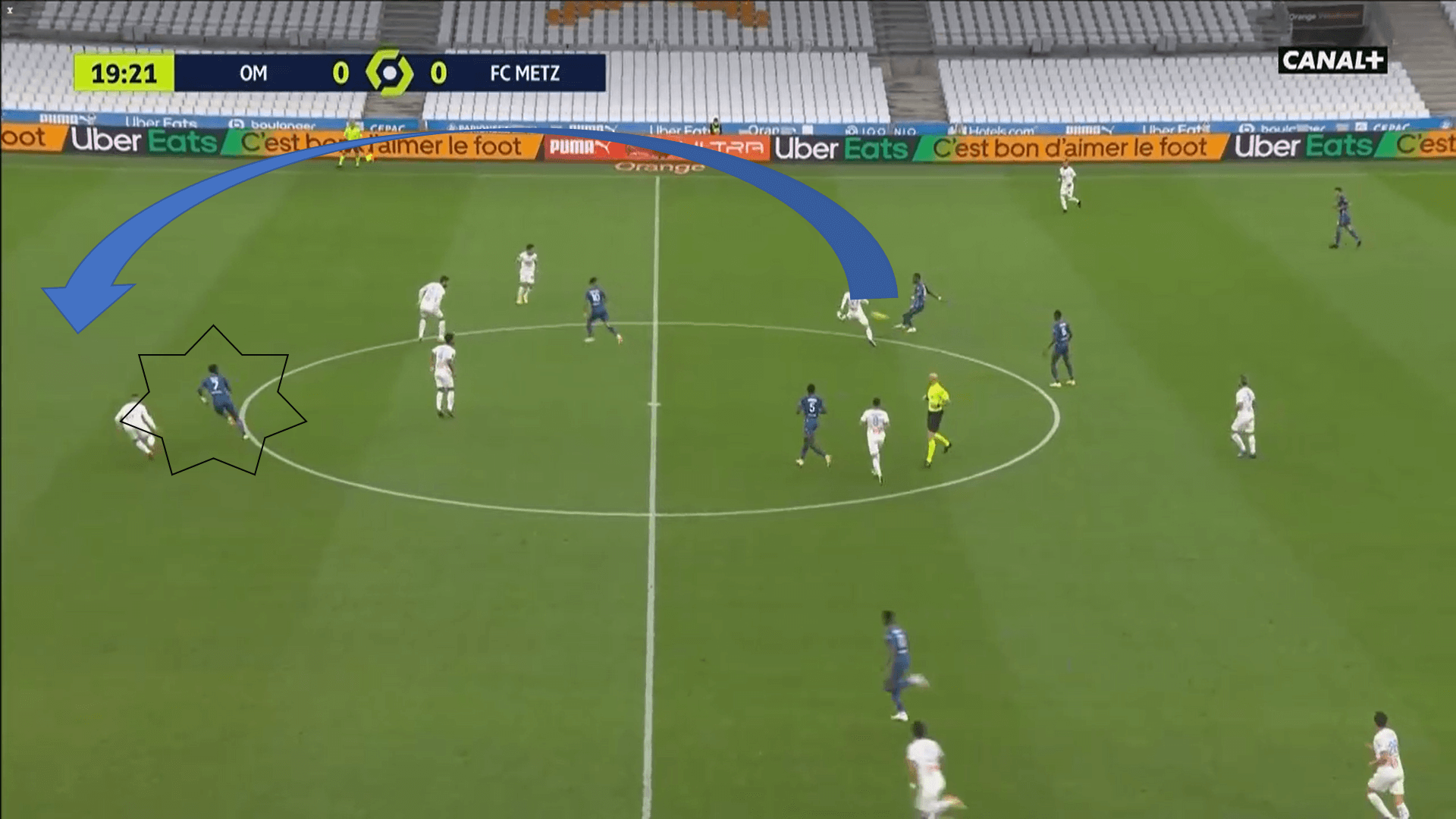 It is important to highlight the great game that Farid Boulaya played as he connected the midfield and the striker. He played as attacking midfielder but had the freedom to go wherever he wanted. This freedom allowed him to generate superiorities in some actions but also give passing options to teammates.

Without him, Metz’s attacks would have struggled as he was the player who was being different for them. He was taking people on (11 dribbles and a 55% success rate) and consistently moving into the right spaces. For example, in the image below, the player in possession could only cross the ball with the striker not even being in the box.

That is why Boulaya is running into the wing to give him a better attacking passing option. 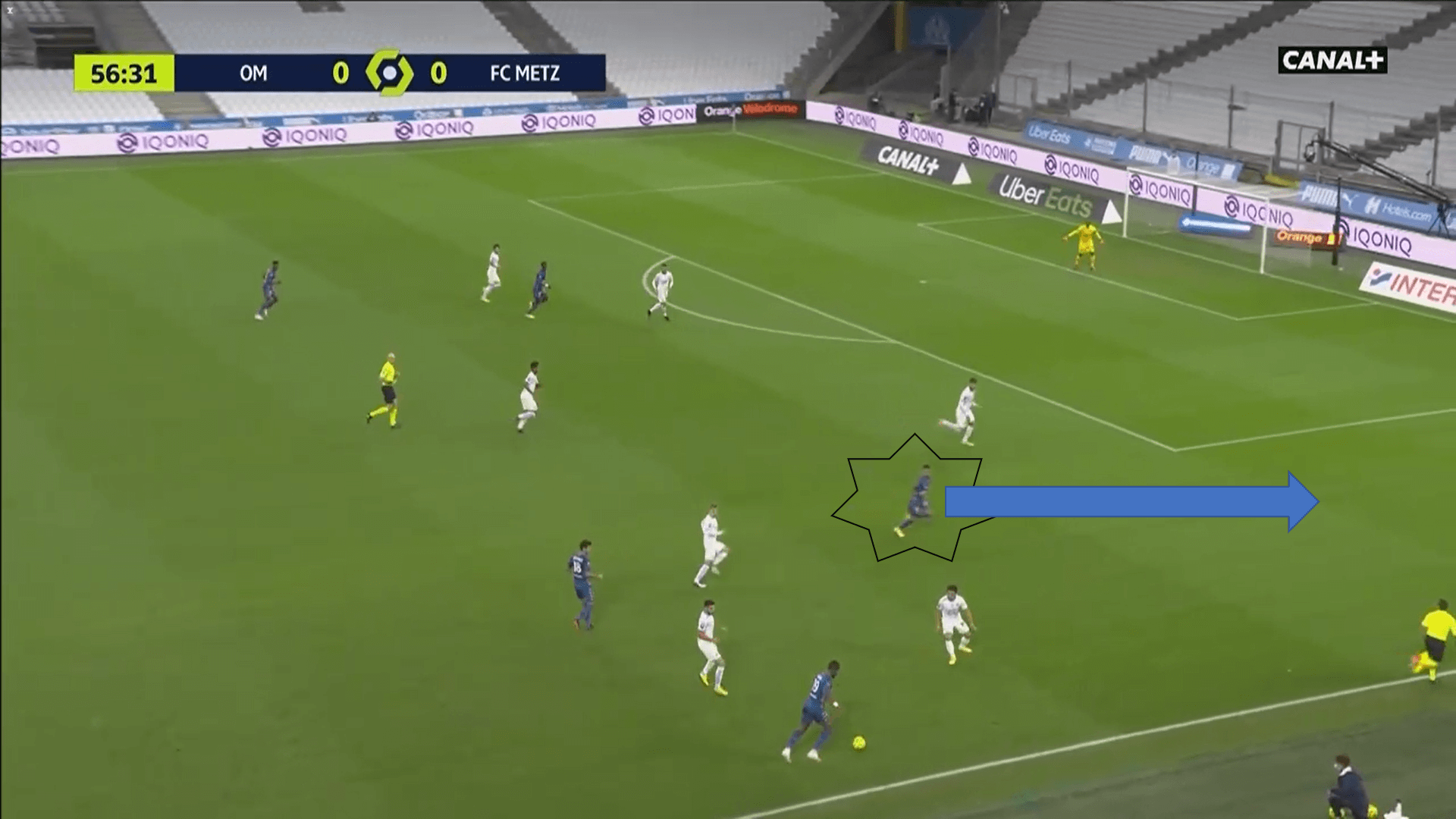 However, it was normal to see how Metz attacked with few people. Since they were defending most of the time, they got tired in the plays and so for many it was hard to help in the counter-attacks. Furthermore, the Metz team did not want to leave themselves vulnerable in case they lost the ball.

Attacking with few people makes it very hard to score since the opponents would have superiorities in defence. Therefore, the attackers would have to rely more on individual skill rather than linking up to create danger. This makes it unlikely that a good opportunity arises from these attacks. 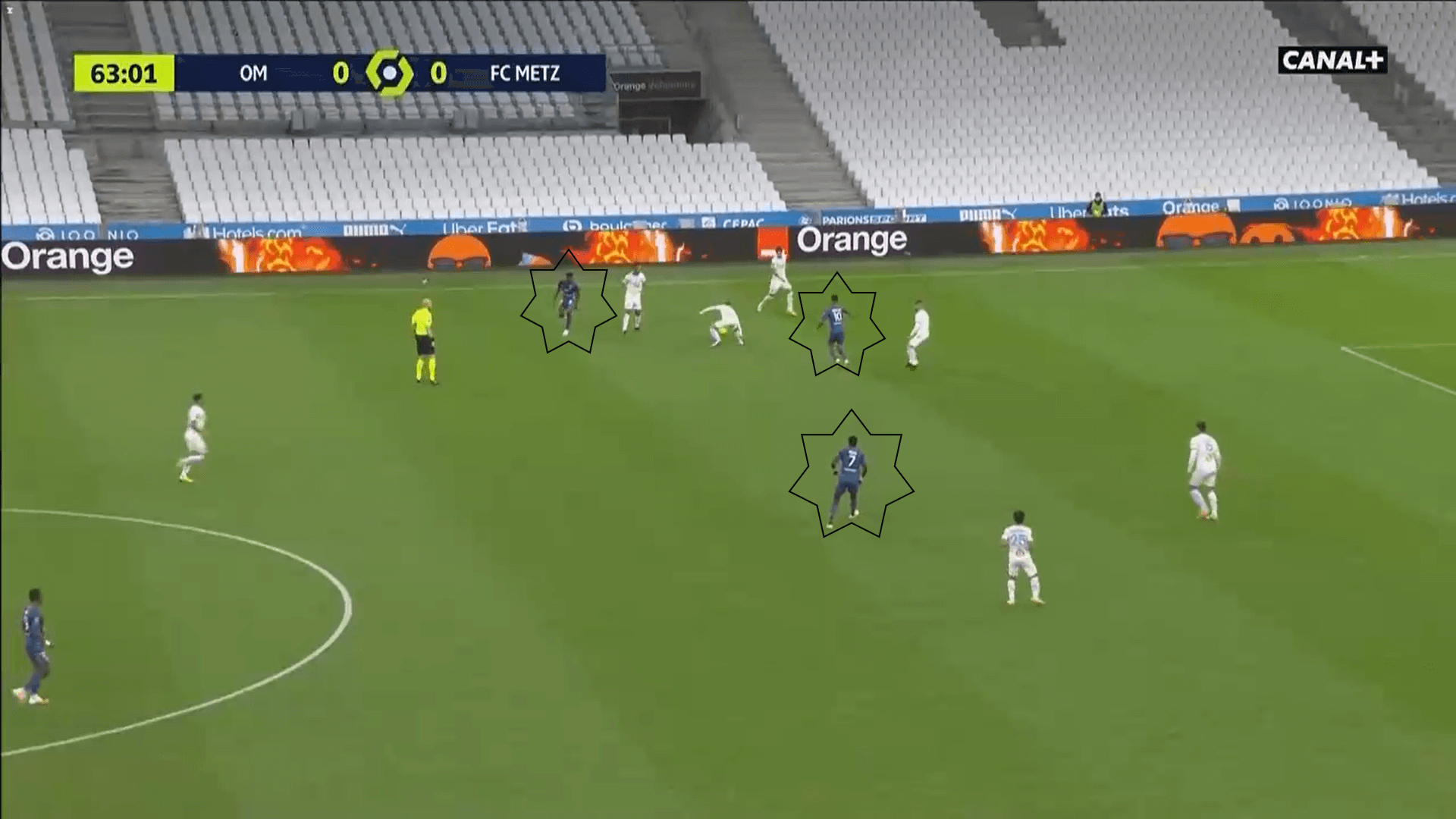 Overall, Marseille dominated the play more because they were creating spaces well in the wing which is where they wanted to attack from. Also, they were pressing high and counter-pressing intensely in order to get the ball as quickly as possible and start another attack. Metz improved in the second half as they pressed more too and so had more possession which allowed them to create more attacks. However, Marseille were the better team in the game but could not convert their superiority into goals.